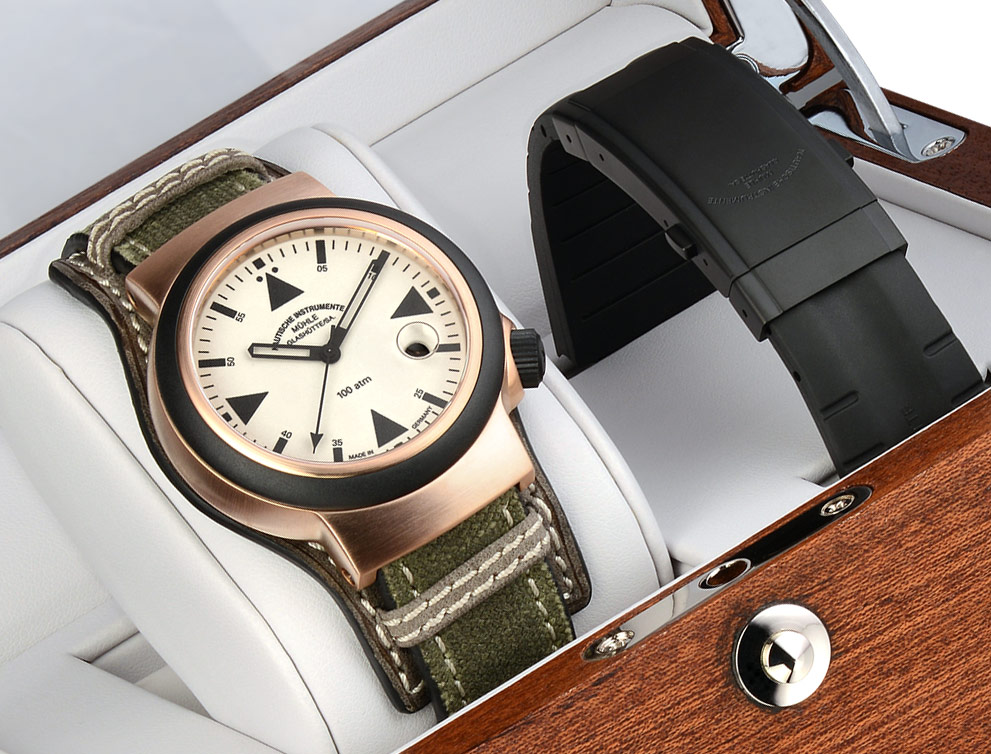 Mühle Glashütte’s SAR Rescue-Timer, originally designed for the German Maritime Search and Rescue Service, is a sports watch you simply don’t hear enough about. For a bit over $2k, and of course no wait list, we’re treated to a utilitarian and distinctly German sport watch with no less than 1000 meters of water resistance, a rubber bumper bezel, a 4mm-thick sapphire crystal, and an impressive helping of Super-LumiNova throughout. Even the somewhat pedestrian Sellita SW200-1 has been given the Mühle treatment, having been taken apart and re-assembled with MG’s own blued screws, a custom rotor, and an in-house woodpecker neck regulation system for improved chronometric performance. For the money, you’re not likely to find a more capable or interesting sport watch with a nautical flair and real-world SAR experience. The stainless steel SAR Rescue-Timer starts at $2390 on an excellent natural rubber strap with a deployant clasp. It’s also available with the bronze case above, for around $2500 USD. 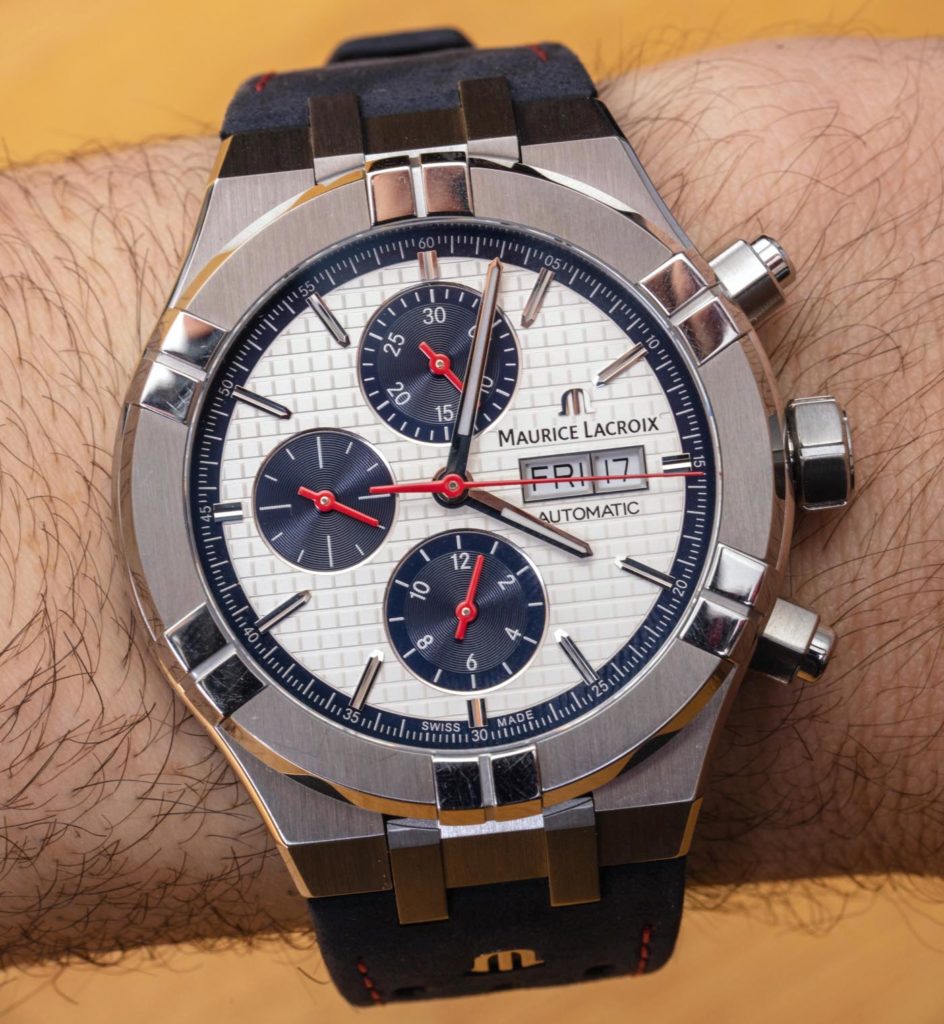 When it comes to steel sports watches, I find it difficult to overlook the offerings from Maurice Lacroix. A few years ago, I found myself with Royal Oak envy, but, unfortunately, a light wallet. I didn’t want any old steel watch, so I ventured out to find something that fit my wallet, but also the aesthetic I was going for. So, I bought an Aikon Gents. And it was my daily beater for almost 2 years until the opportunity presented itself at SIHH 2018 to get the Aikon Automatic Chronograph, which has barely left my wrist since.

I would argue that in the price point, the Maurice Lacroix Aikon Automatic Chronograph has nearly unbeatable build quality. The bracelet fits perfectly and takes on its own personality. The dimensions are large at 44mm x 15mm but the watch sits gracefully on the wrist. The Valjoux 7750 movement is added value, and even with a sapphire caseback, the watch maintains its 200m water resistance. The Aikon Automatic Chronograph is a formidable sports watch that I would argue punches way above its weight class. And priced at $2,950, it has been my watch to beat since I first put it on my wrist. 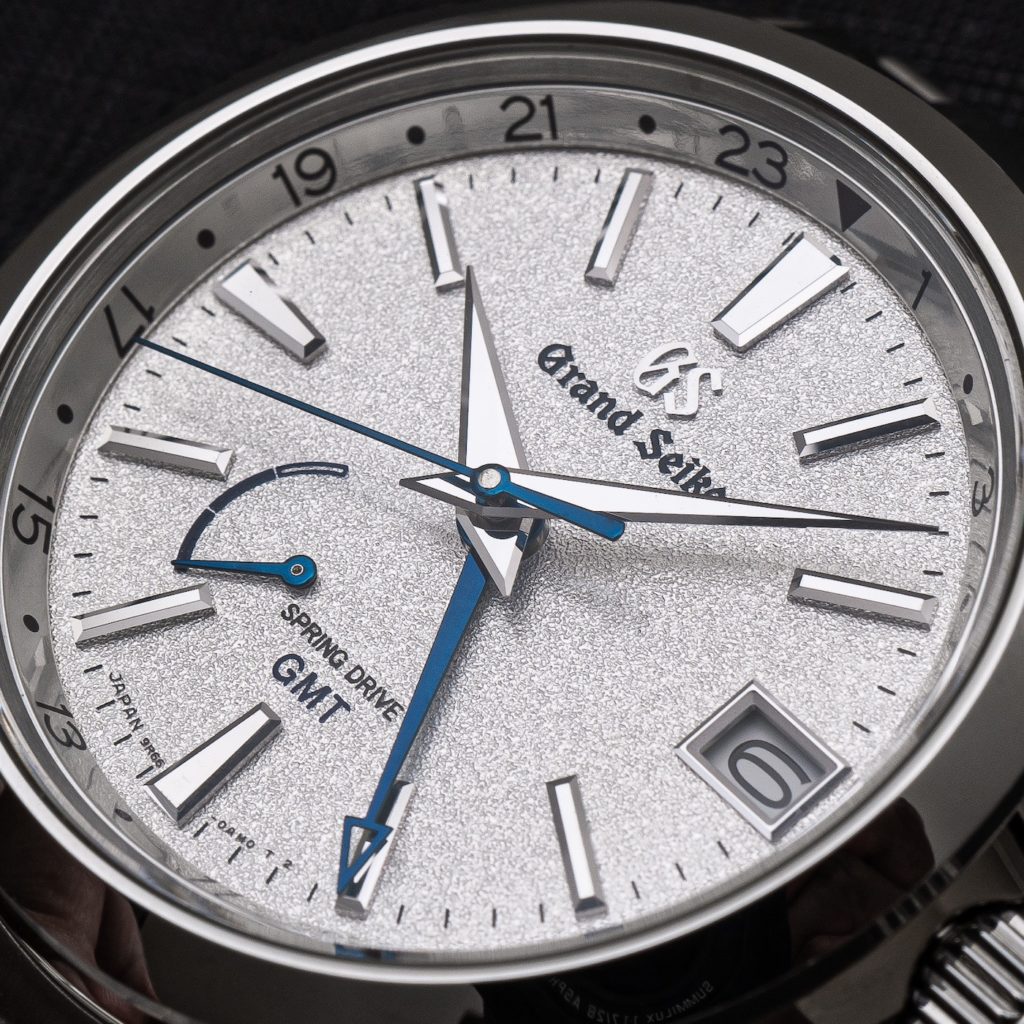 These lists always bring out some interesting choices. They also shine a light on how different each individual’s perception of value, or even genre, can be, especially when expansive terms like “sports watch” are used. Are dive watches not sports watches? Yes, but they are something else, too. The same goes for some GMT watches. For example, the Rolex GMT Master II Pepsi is a GMT, first and foremost, but I don’t think anyone would argue that it is not a sports watch, too. And so, when I think of my favorite steel sports watch that can be picked up without a waiting list, I think of something that has the classic, dressy vibe of the aforementioned Rolex 126710BLRO, the Patek Philippe Nautilus, or the Audemars Piguet Royal Oak.

As a fan of Grand Seiko, my mind immediately flips to something from the Spring Drive collection, but over here in the UK, the Snowflake dial (reference SBGA211) is also on a waiting list (and in a titanium case). While the newer, warmer-toned Snowflake reference SBGA259 with gold hands is a solid choice, it lacks the ice-cool character and contemporary feel of the standard, classic model. This is where our old friends at Timeless Luxury, Dallas step in with the recently released Grand Seiko Spring Drive “Blizzard” Dial, reference SBGE249. The Blizzard effect has the same kind of character and visual interest as the Snowflake, and it is even rarer. Despite not being on a waiting list, its availability is limited to just 250 models.

So if you want sexiness and scarcity in stainless, this is it. It’s every bit as characterful as the Snowflake. It’s in a steel case. It has a GMT complication, too. It is a go-anywhere, do-anything, 100-meter water resistant daily wear that would look just fine with a top hat and tails. And it’s $5,900. Sign. Me. Up. 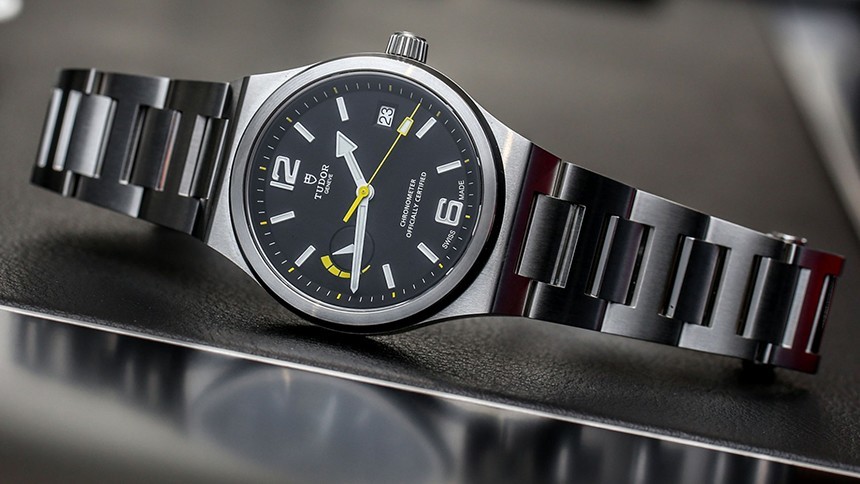 Did Tudor foresee the trend of stainless steel sports watches with integrated bracelets with the North Flag? It sure seems like it. But on a more serious note, the North Flag is a historically important watch in Tudor’s history, not only because it’s one of Tudor’s newer models but also because it was the first to use Tudor’s in-house movement. We can argue about the way it looks all day, but this is an objectively accomplished watch. In-house movement, COSC-certified, 100 meters of water resistance, and a solid build quality associated with Tudor. This is easily one of Tudor’s most underrated watches — and with a price of $3,750, one of the brand’s more approachable offerings.