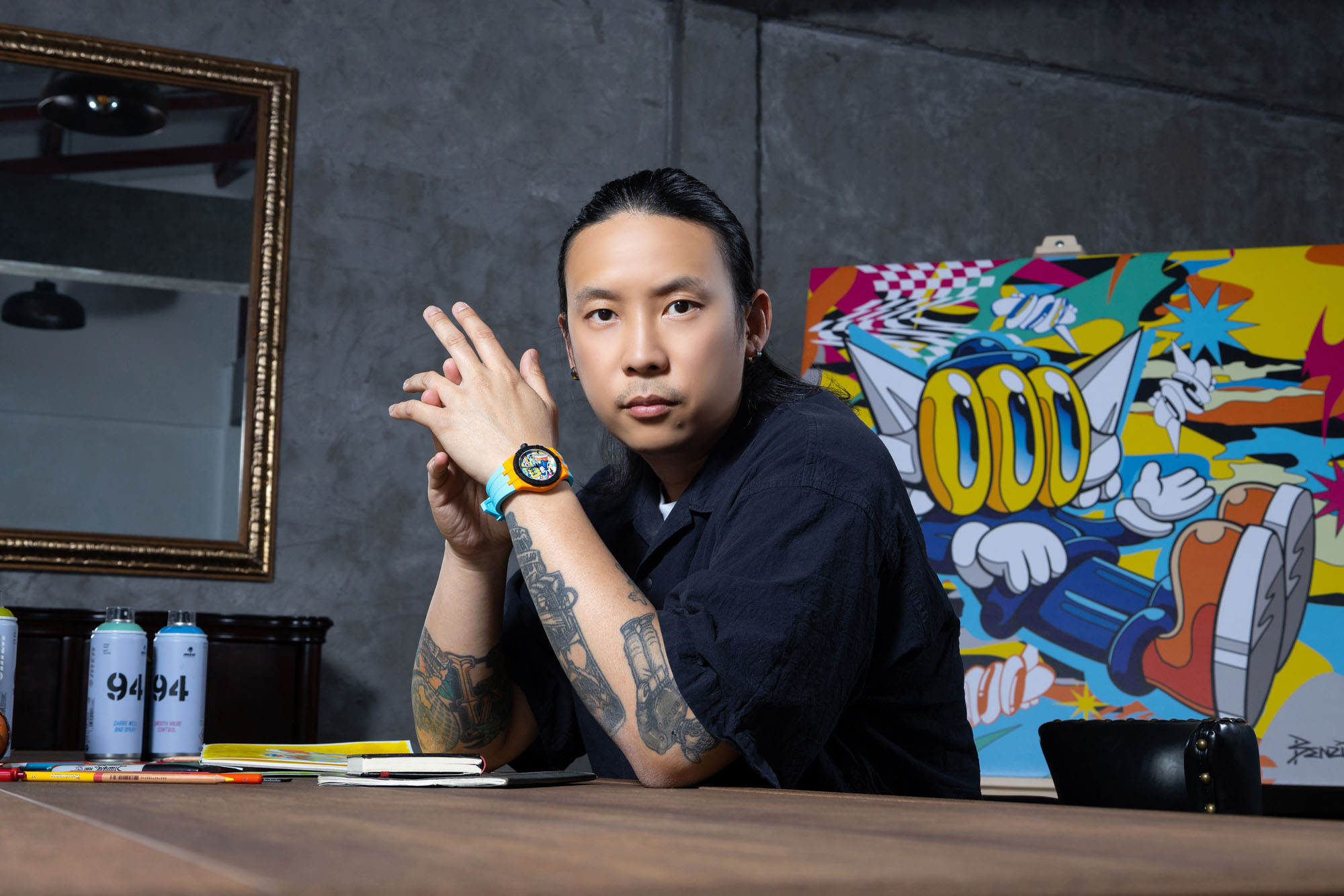 In March 2022, Maurice Lacroix introduced its Aikon #tide series of watches, which feature colorful cases made from recycled plastic reclaimed from the world’s oceans. An increasing number of watch brands are placing an emphasis on sustainability these days, and Maurice Lacroix claims that each Aikon #tide watch that it produces accounts for the equivalent of 17 plastic bottles being removed from the ocean. Although this represents a relatively small impact in the grand scheme of things, it still has a positive impact on the world’s oceans and most importantly, helps bring awareness to the challenges we face preserving our planet and its ecosystems. The new Maurice Lacroix Aikon #tide Benzilla watch is in collaboration with the Thai street artist Benzilla and expands upon the already colorful Aikon #tide collection to create what is easily the most colorful execution of the model that has been put forward thus far. 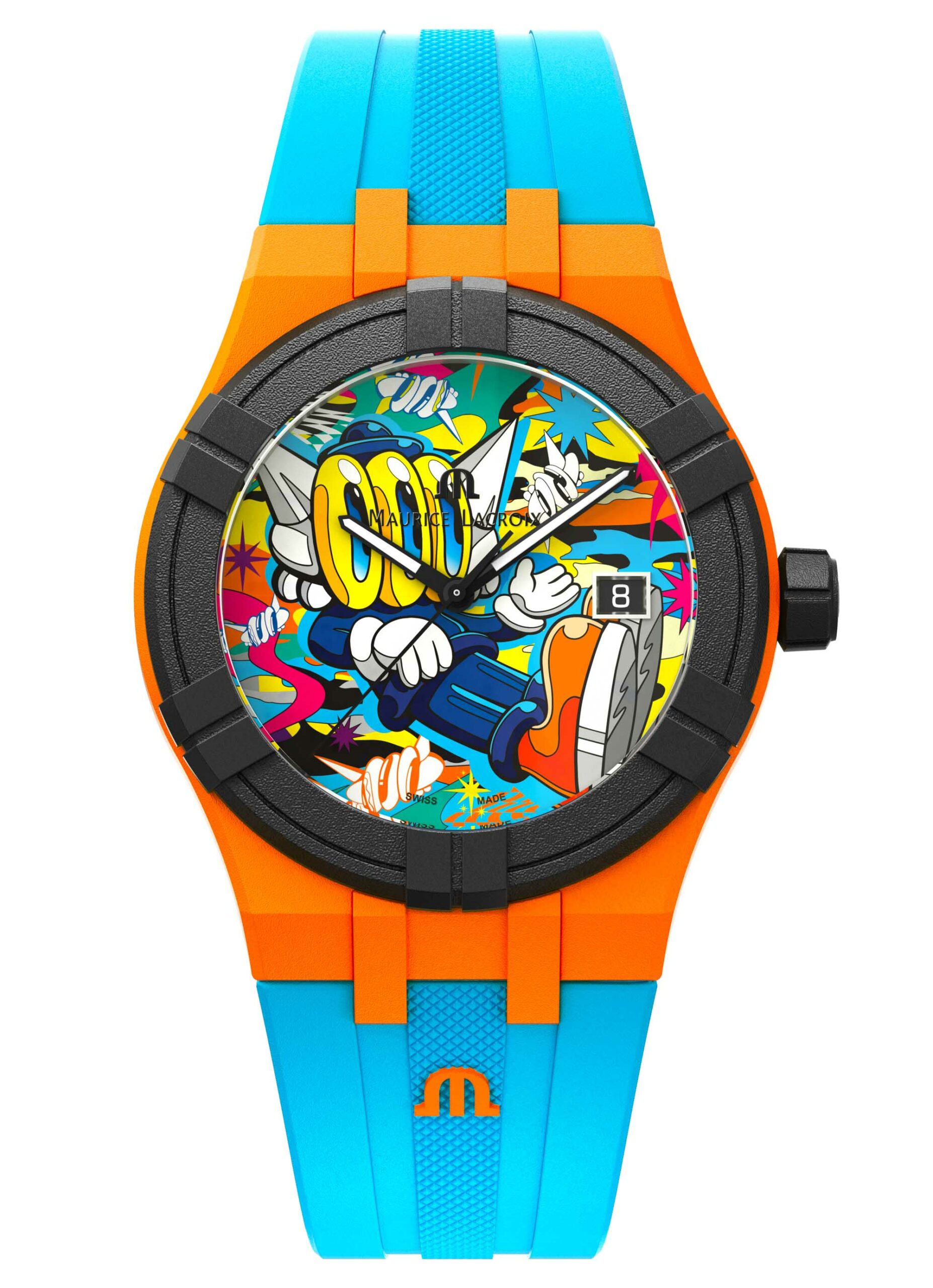 Just like the existing Aikon #tide models, the new Maurice Lacroix Aikon #tide Benzilla watch features a 40mm case that measures 11mm-thick and follows the collection’s signature “claw bezel” integrated bracelet design. Just like before, the case itself is made from a proprietary composite material developed by the Swiss-based company Tide Ocean, which consists of ocean-sourced plastics and fiberglass that is twice as hard and five times more scratch resistant than first-use PET plastic, while simultaneously having a significantly smaller environmental footprint. Not only is the recycled material used for the case and caseback, but it also forms the bezel, strap buckle, and winding crown. On the Benzilla edition, the middle case and buckle for the strap appear in bright orange ocean plastic, while the rubber strap itself is light blue with a matching orange “M” logo on the 6 o’clock side. Both the bezel and crown are made from black ocean plastic, and just like the standard production models, the dial is protected by a flat sapphire crystal, while the crown screws down to the case in order to help provide it with a reliable 100 meters of water resistance. 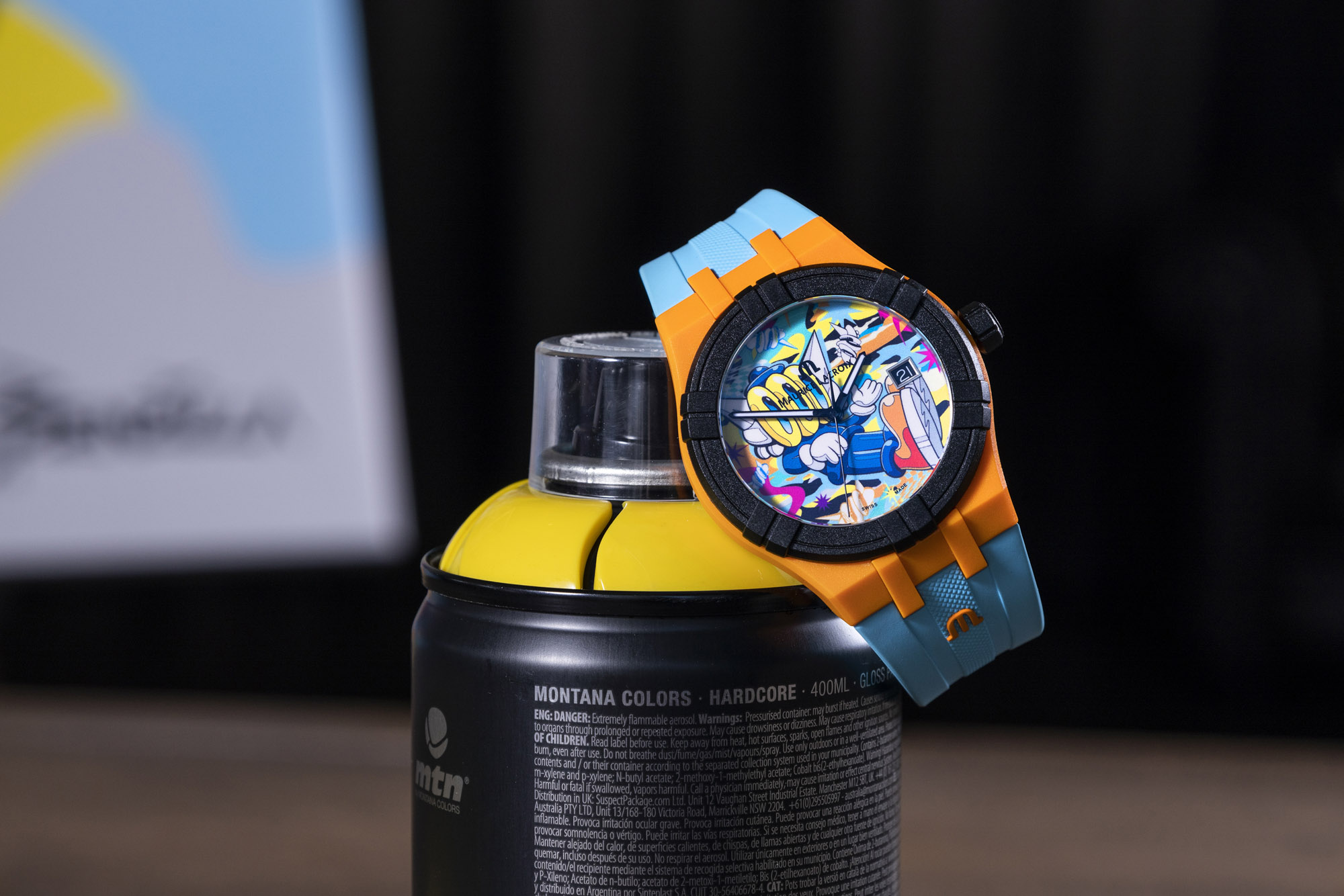 While most of the Maurice Lacroix Aikon #tide watches feature dials that are the same vibrant color as their cases, the dial fitted to the Benzilla edition is essentially a downsized version of one of the Thai artist’s paintings. Depicting what is described as the “three-eyed character, ‘LOOOK,’ an alien who came from nowhere to live among us,” the dial offers a densely packed landscape of saturated colors with three centrally mounted hands for displaying the time and a date window at the usual 3 o’clock location. The ultra-colorful dial, along with the decision to have the strap in light blue (rather than black or white like the other Aikon #tide models) makes the Maurice Lacroix Aikon #tide Benzilla edition appear significantly more vibrant and colorful, despite still having a black bezel and winding crown. Since the dial itself is essentially a miniaturized picture, there are no hour markers whatsoever, and the only text is the Maurice Lacroix logo on the upper half, along with the words “Swiss Made” appearing in small letters at the very bottom of the dial. 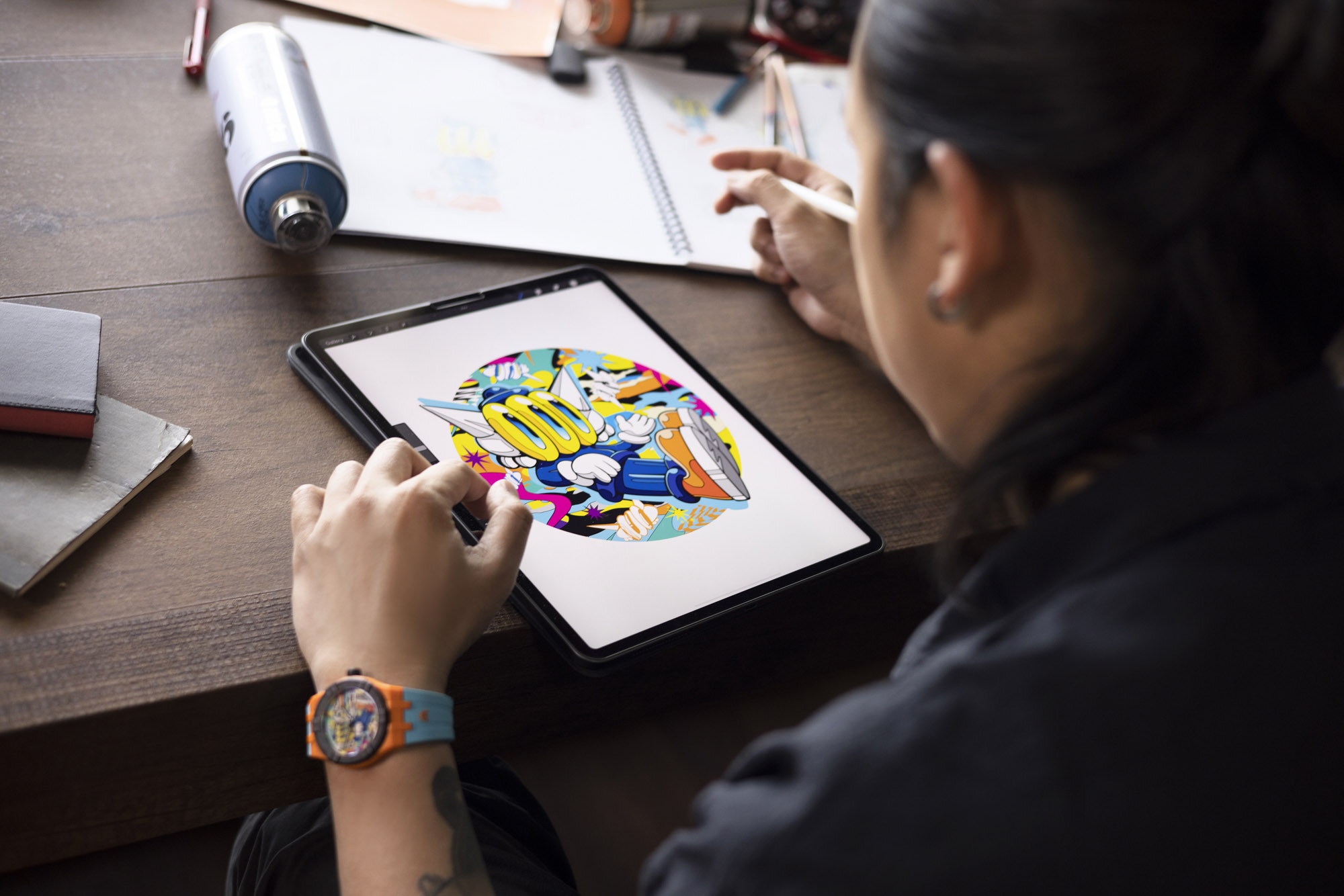 Like other Aikon #tide models, the Maurice Lacroix Aikon #tide Benzilla edition is powered by a Swiss quartz movement. While the manufacturer does not specify which caliber is actually used inside the watches, it is more than likely a well-known and proven design from a big-name manufacturer such as ETA or Ronda. Purists will inevitably roll their eyes at a plastic watch that is powered by a quartz movement, but not only does this decision help keep retail prices down for these recycled ocean plastic models, but it also enables the Aikon #tide watches to be incredibly lightweight. It’s also important to remember that Maurice Lacroix produces other versions of the Aikon that are powered by automatic movements and crafted from traditional materials like stainless steel, bronze, and titanium. These colorful Aikon #tide models — especially the Benzilla edition — are intended to be more like colorful accessories or novelties, rather than the one watch that a person wears every single day for the rest of their lives. In that capacity, a reliable quartz movement with grab-and-go convenience simply makes sense, even if it lacks the horological intrigue of a mainspring and balance wheel. 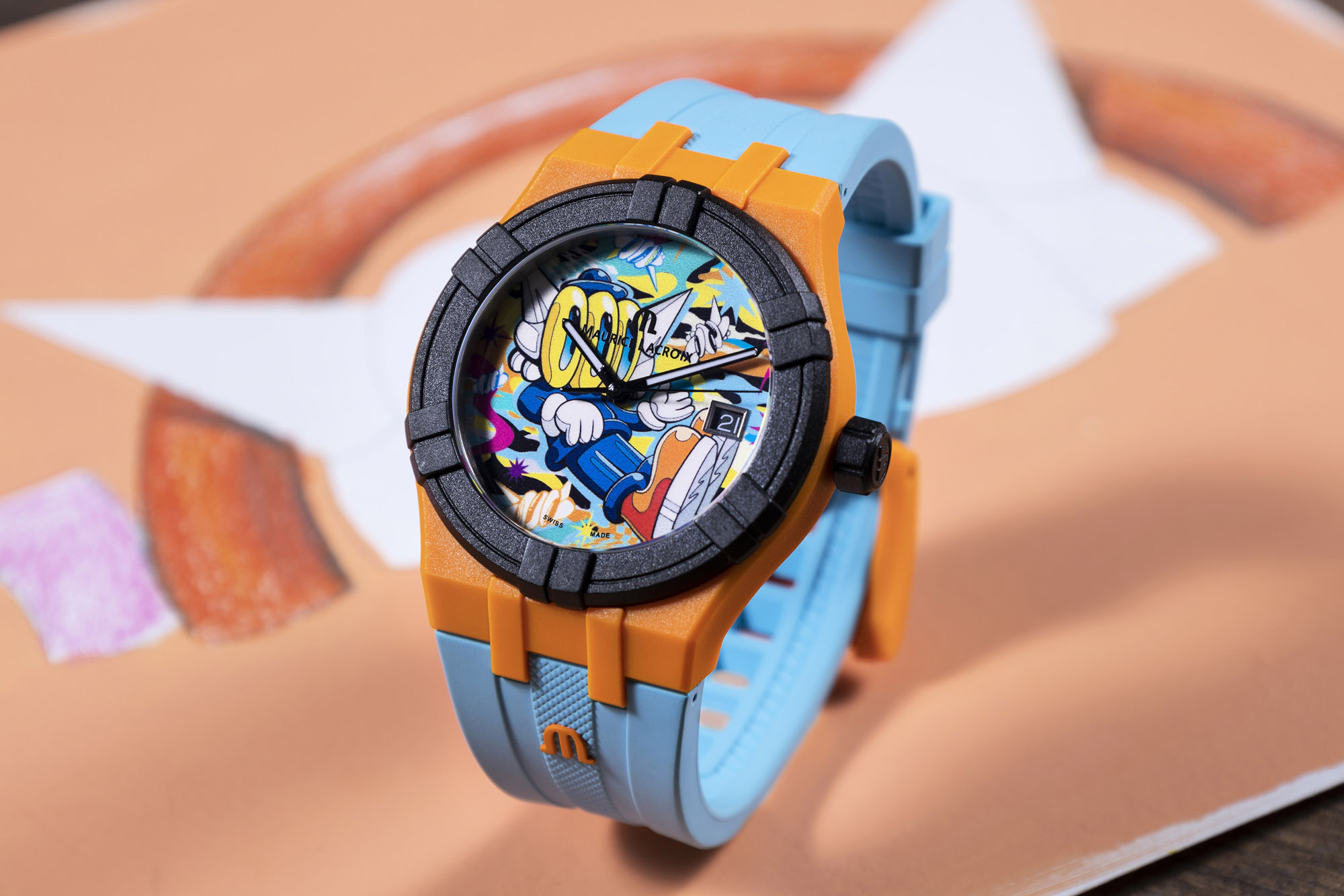 One of the greatest challenges for collaboration watches is that sometimes their price points end up being far outside the realm of what someone might be willing to pay for what they ultimately deem to be a high-end novelty item or fashion accessory. Once a watch starts costing thousands of dollars, buyers get a little more opinionated about whether or not they want bright colors or a cartoon character on their dials. However, the Aikon #tide series serves as the perfect affordable platform to showcase a wide range of different collaborations, and with an official retail price of $825 USD, the Maurice Lacroix Aikon #tide Benzilla edition likely won’t be the last collaboration watch that we see from the brand. For more information, please visit the manufacturer’s website.