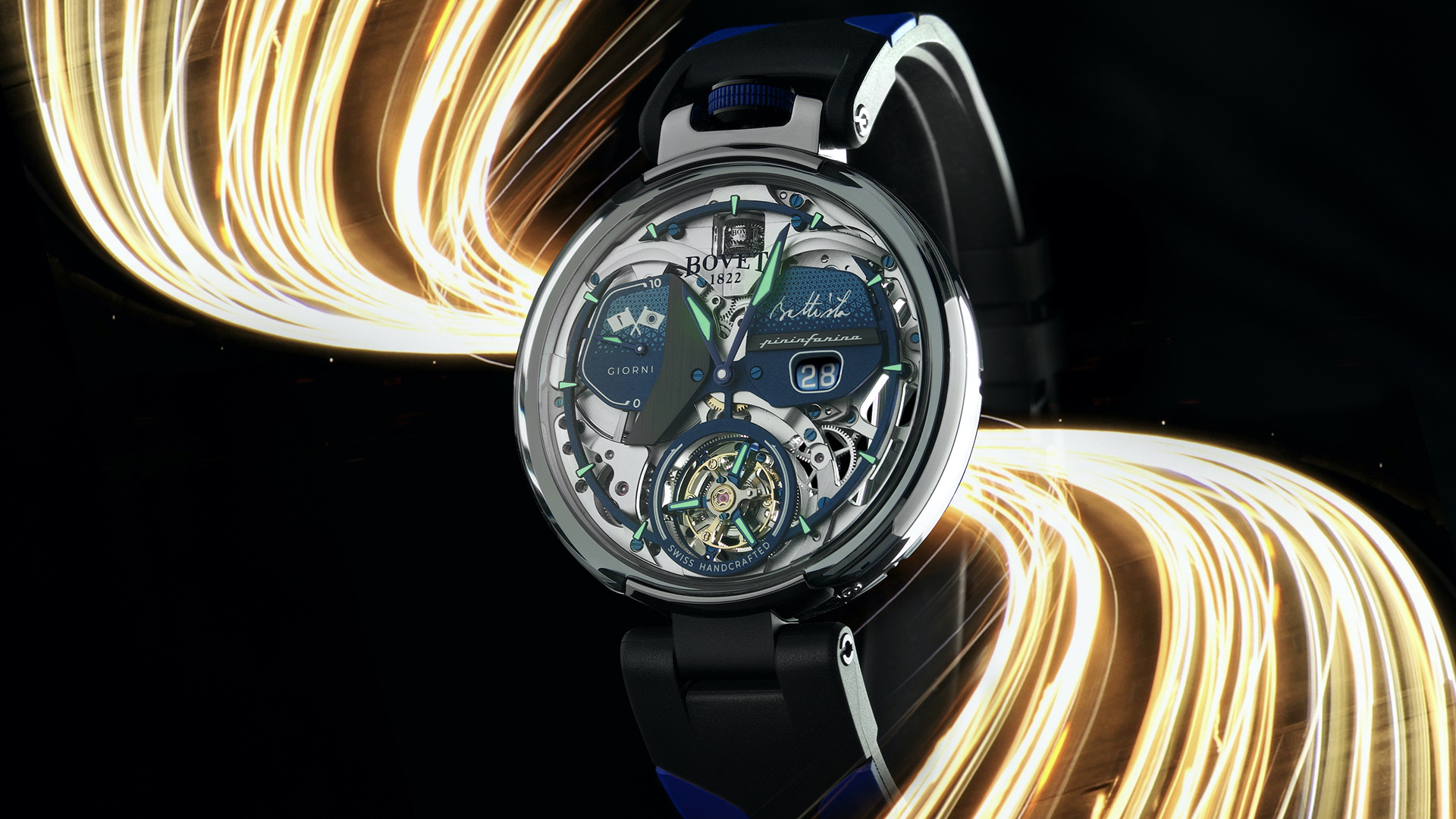 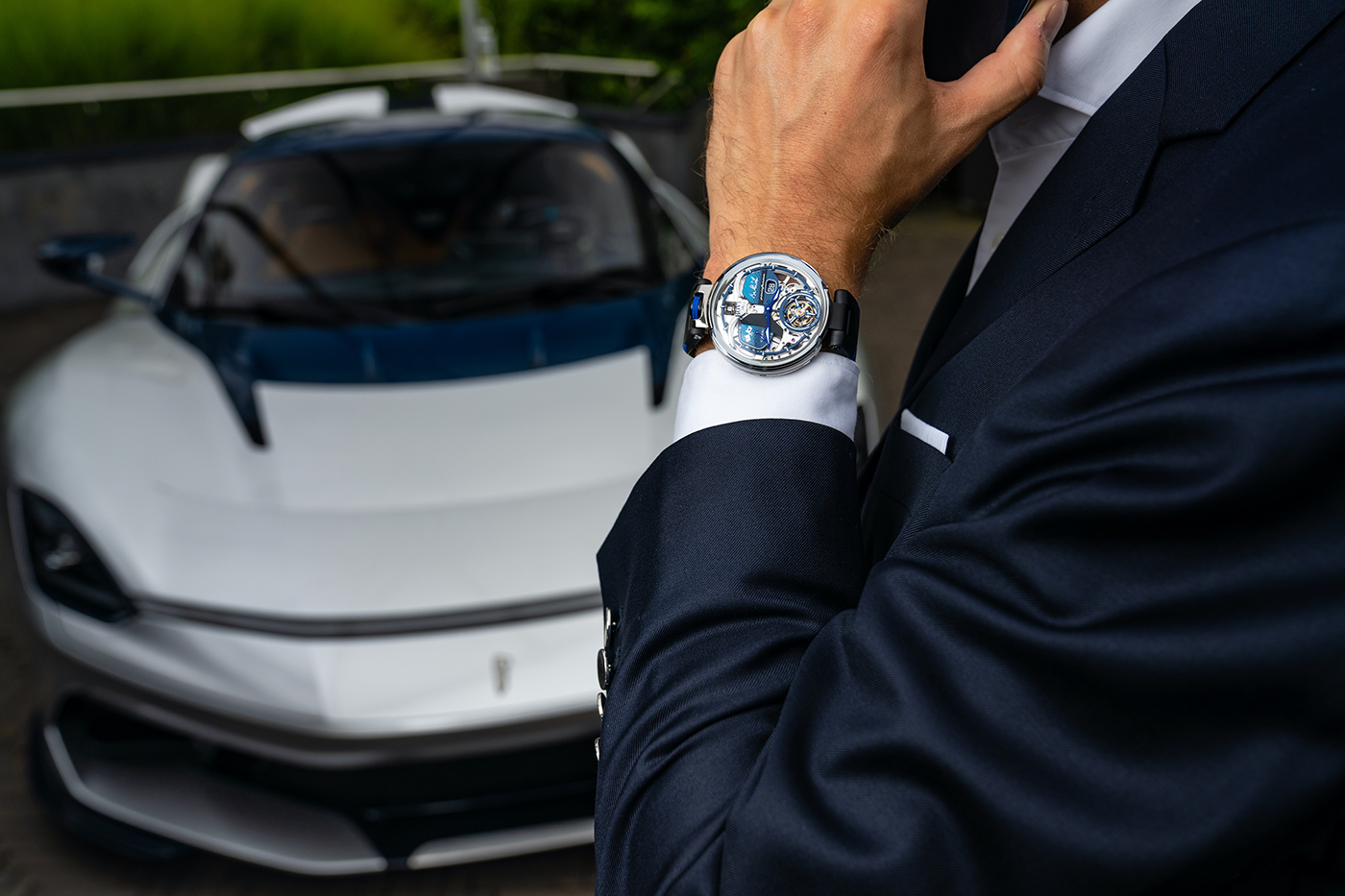 In the automotive world, few if any design houses hold the same history and reverence as Italy’s Pininfarina. From its special relationship as the designer of choice for Ferrari for decades alone the brand has a legendary reputation among enthusiasts, but Pininfarina has a wealth of other achievements, designing cars for brands as varied as Alfa Romeo, Volvo, Nash, Cadillac, and Chinese automaker Chery. In recent years, the storied design group has gone into business for itself, creating its first ever self-branded automobile with the soon-to-be-released Pininfarina Battista electric hyper GT car. Haute horlogerie brand Bovet is no stranger to ultra-luxury automotive partnerships, and its latest release sees the Swiss boutique brand join forces with Pininfarina to create a futuristic new design inspired by the all-electric Battista. The new limited edition Bovet Battista Tourbillon is an ultramodern departure for a brand known mostly for its fancifully baroque skeleton designs, combining the atelier’s mechanical hallmarks with an aggressive new design language paying homage to Pininfarina’s first-ever independent car. 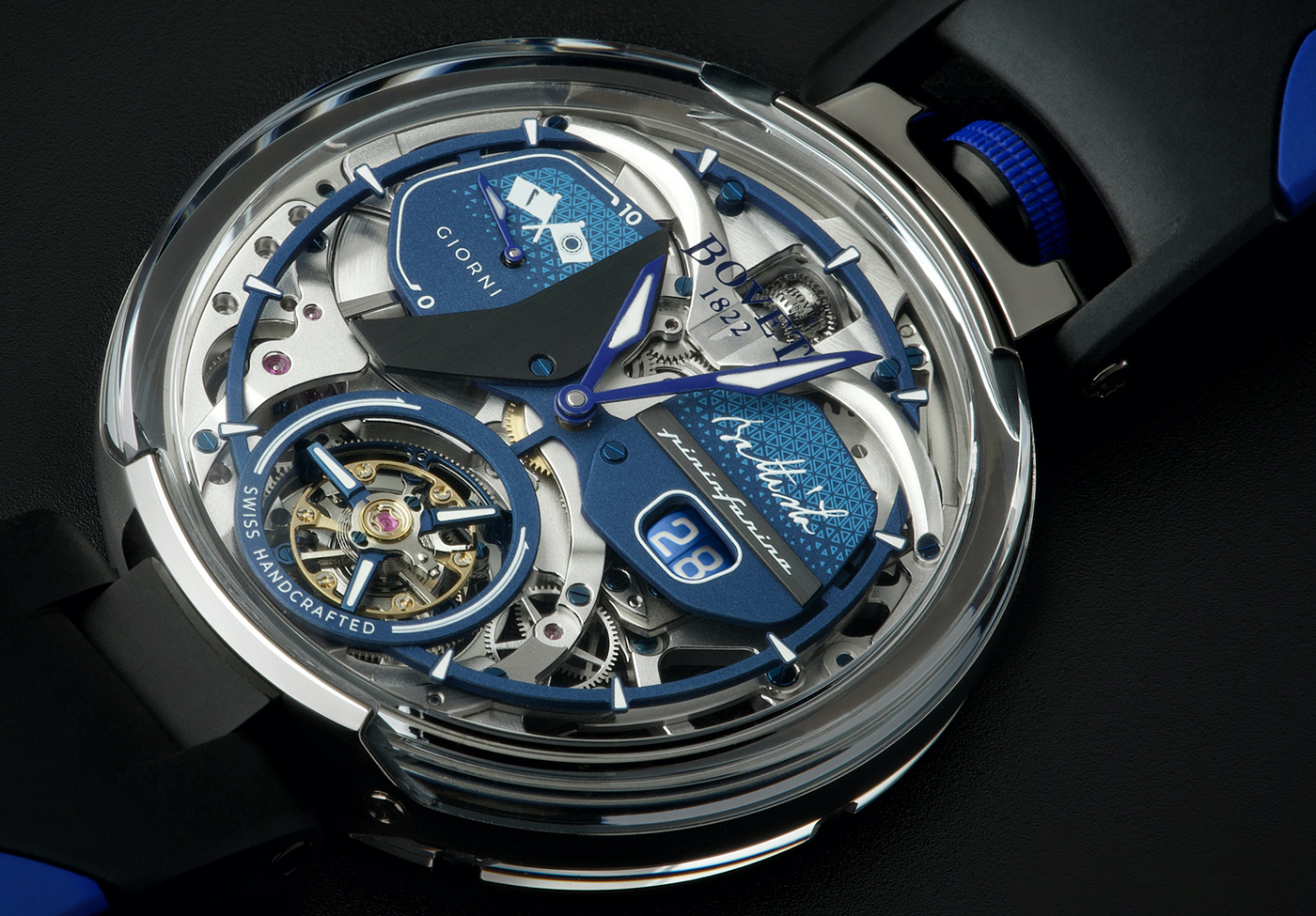 Available in polished titanium, red gold, or platinum (unfortunately, the brand was only able to provide images of the titanium model for press time), the hefty 45.6mm case of the Bovet Battista Tourbillon reinvents the look of the brand’s signature Amadeo Convertible Case design with far more modern and aggressive lines. The elegant arcing 12 o’clock crown guard of the Amadeo is gone entirely, replaced by an implied squared-off form in the two tone strap, while the crown itself is rendered in sporty black and blue. Likewise, the Battista Tourbillon’s asymmetrical lugs are sharp and simplified, with the 6 o’clock lug assembly reduced to a single hinged link attached to the case side. The cylindrical main case body itself is dominated by massive box sapphire crystals both front and rear, making the view in images as close to a true sapphire case as possible with excellent visibility from a variety of angles. In addition to showcasing the skeleton movement within, this radical approach also reduces the visual beltline of the Battista Tourbillon significantly, and should make the already reasonable 11.9mm-thick case wear slimmer on the wrist. As might be expected from the unorthodox construction here, the Bovet Battista Tourbillon’s water resistance is far below average at only 30 meters. 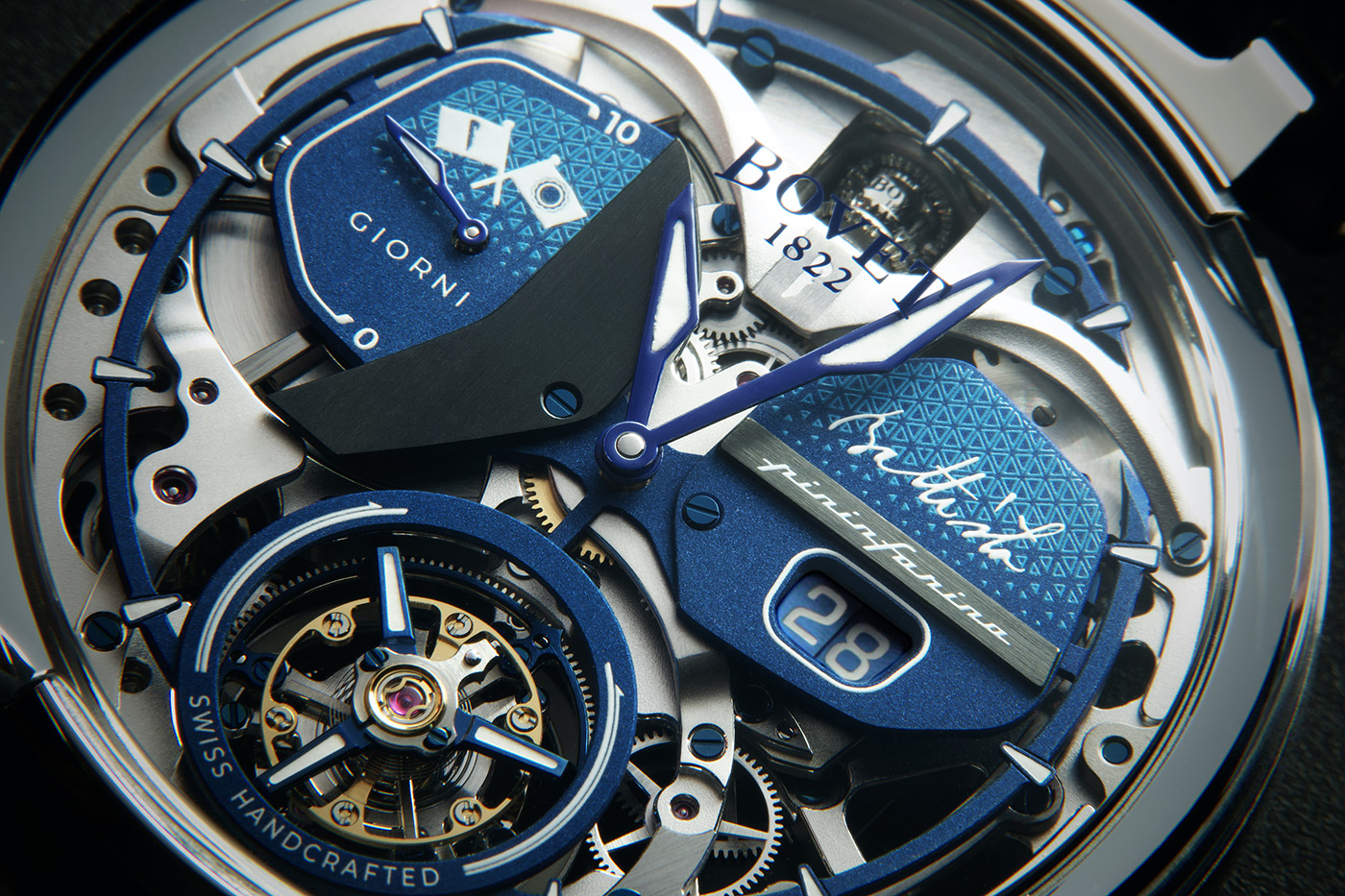 In addition to its sharp, futuristic automotive-inspired take on skeleton dial design, the dial of the Bovet Battista Tourbillon is a milestone for the brand in other ways. For the first time since the brand’s founding in 1822, this is a Bovet design with asymmetrical subdials, and Bovet accents this company first with both form and color. The softened heptagonal shapes of the off-axis subdials, along with the streamlined brushed black accent pieces, emulate the futuristic form of the Pininfarina Battista and create a subtle “90” to celebrate Pininfarina’s 90th anniversary. The striking blue-on-blue printed triangular pattern is lifted directly from the car’s bespoke Triangolo upholstery pattern. Both subdials also feature intricate nods to the legacy of both Bovet and Pininfarina, including a pair of crossed flags bearing both the Pininfarina emblem and the Bovet lotus symbol on the 10 o’clock power reserve subdial. The 2 o’clock subdial, reserved for the watch’s strikingly blued big date display, also features Pininfarina founder Battista Farina’s signature above the display window. The unique asymmetrical and angular handset continues this ultramodern design trend, with a form meant to evoke the dramatic bodylines of the car. By contrast, the 6 o’clock tourbillon is a slightly more conventional affair, but still shines in images thanks to Bovet’s patented dual-sided flying tourbillon design and a three-armed cage inspired by the Battista’s Impulso wheels. Thanks to the Battista Tourbillon’s strong use of color, the swooping metal forms of the bridges are allowed to fade into the background somewhat in images, but still contain novel cues like the proprietary exposed differential gear train at 12 o’clock connecting the crown to the rest of the movement. 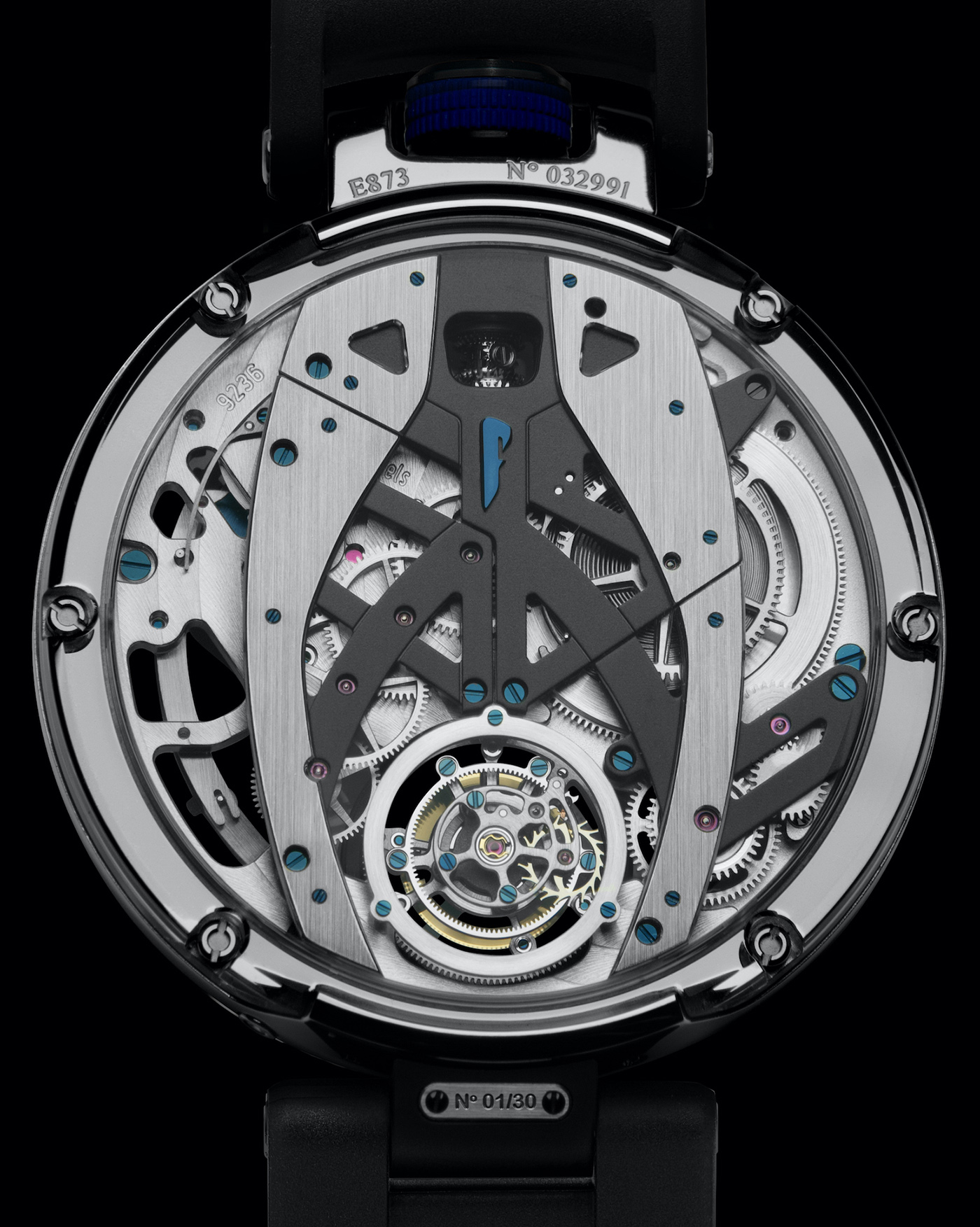 The in-house 16BM01TVGD handwound flying tourbillon movement inside the Bovet Battista Tourbillon is designed exclusively for this model, with a complex two-tone web of bridges on the caseback side that follow the curvature of the car’s rear window. Outside of this alternating blend of curving steel and sharply angled black bridges, the caseback view is focused largely on both the 6 o’clock tourbillon and the movement’s enormous open mainspring barrel. This massive barrel allows the 16BM01TVGD to claim a spectacular 240 hour power reserve – a full 10 days – at a relatively gentle 18,000 bph beat rate. Bovet pairs the Battista Tourbillon with a sculpted two-tone matte rubber strap, accenting its simple black base tone with dramatic tapering hockey stick stripes in vibrant royal blue. 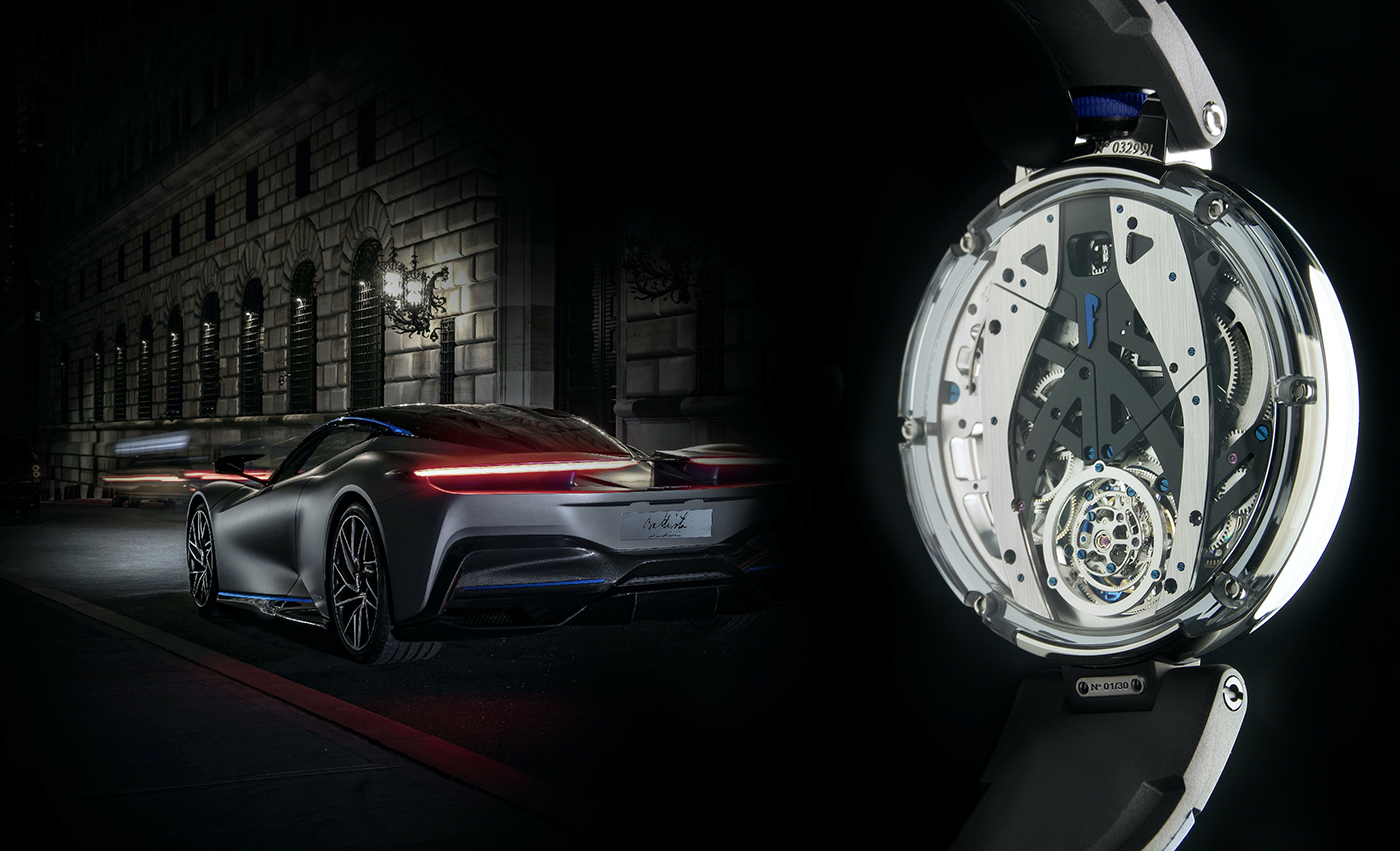