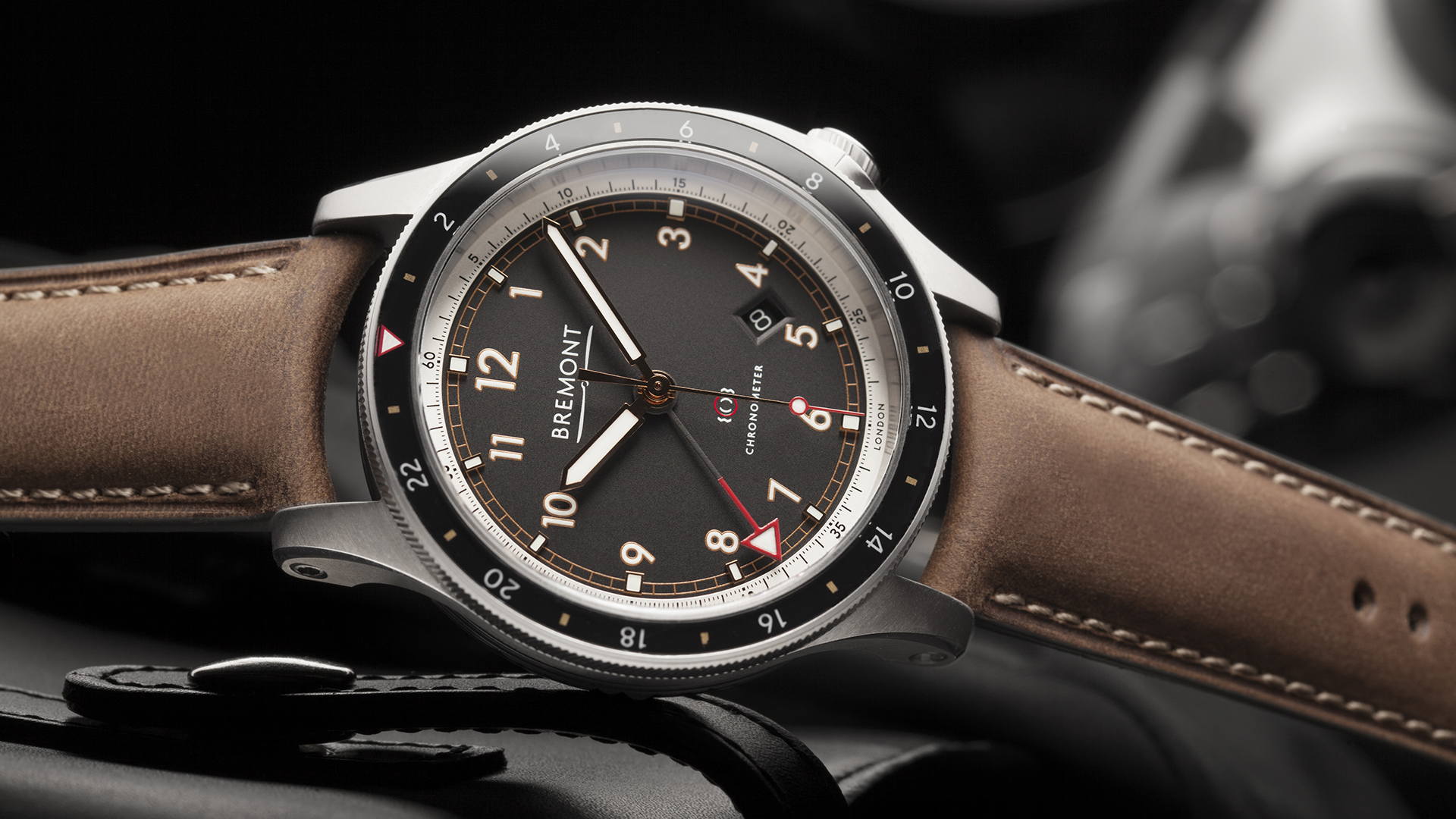 Over its relatively young lifespan, British marque Bremont has built a substantial link to aviation and flight history, particularly to British pioneers in flight. One of Britain’s great aeronautical innovators, in addition to being one of the world’s most prestigious luxury car brands, is Rolls-Royce, which has developed aviation engines for both commercial and military aircraft dating back to the early 20th century. For the first time these two British aviation icons have partnered together, with Bremont becoming the official timekeeper for Rolls-Royce’s attempt to break the 300 mile per hour barrier in an all electric aircraft for the first time ever early in 2021. As part of this partnership, Bremont has developed the new Bremont ionBird, a GMT pilot watch combining a handful of Bremont’s signature aviation touches with a clean, classical style. 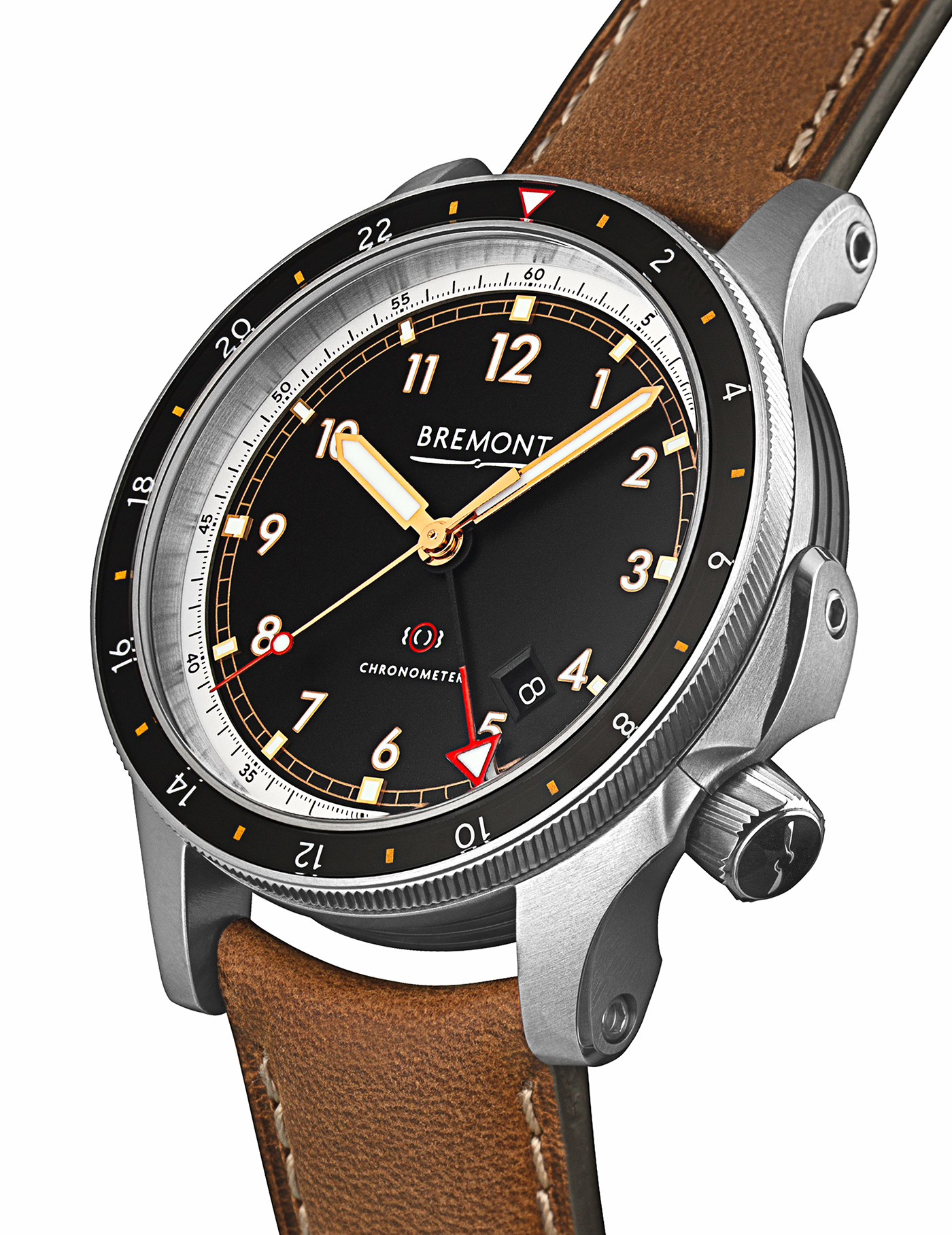 The 43mm titanium case of the Bremont ionBird mostly follows the brand’s Trip-Tick multi piece case design formula, with a flowing lug assembly attached to a ribbed black cylindrical central case. Where the ionBird really differentiates itself, however, is with the guard surrounding the 4 o’clock crown. This guard connects to and directly mirrors the shape of the lug, creating a continuous shape on the case profile reminiscent of a spinning propeller blade. The coin edged GMT bezel is more conventional, with a vintage-inflected insert with light, airy Arabic numerals punctuated by pops of gilt. 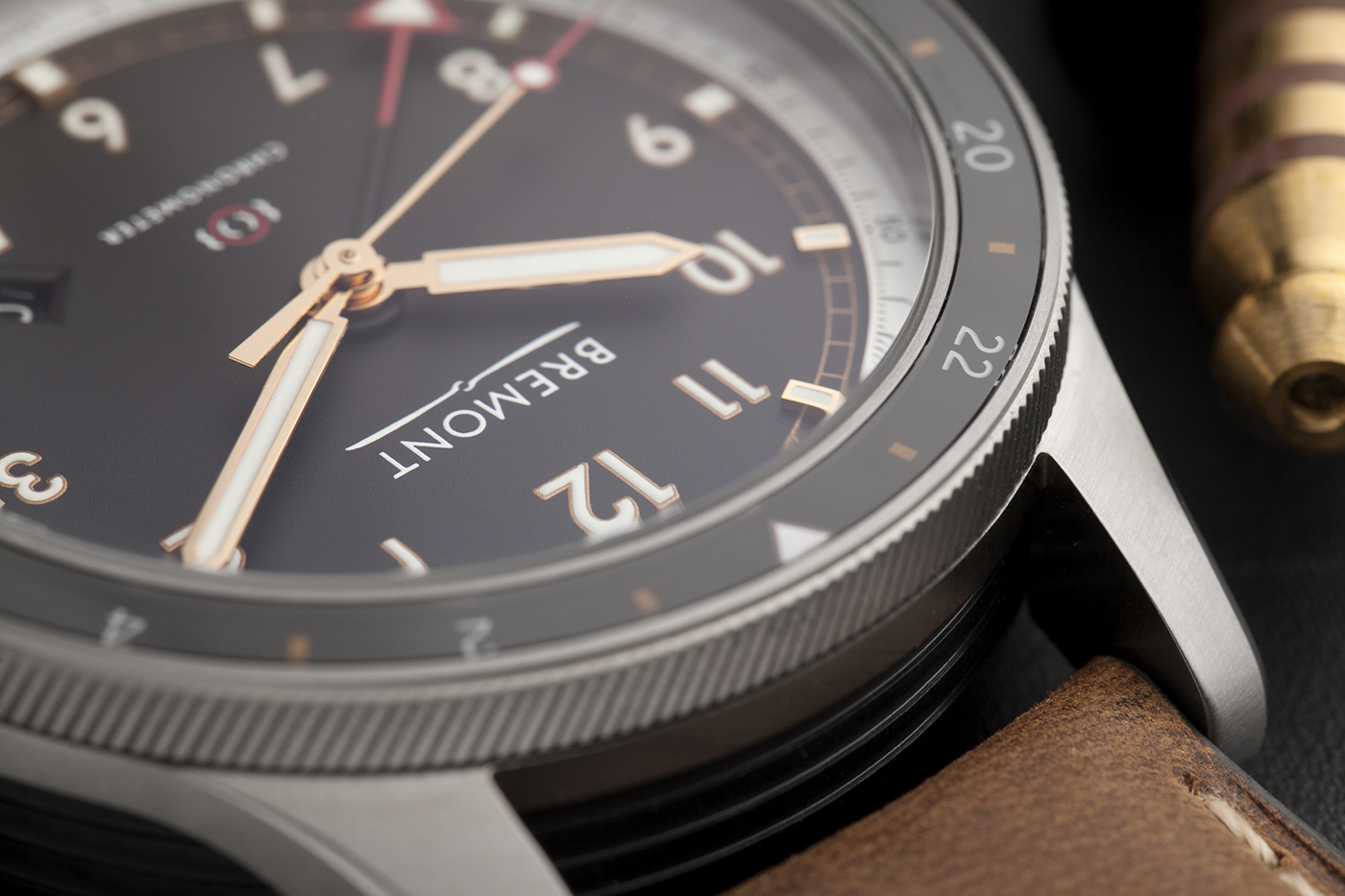 The dial design of the Bremont ionBird is clean and straightforward, with a warm, midcentury inspired look. The dial surface itself is a grainy matte black, accented by a white outer seconds ring and a gilt railroad minutes track. The Arabic numerals at the hours are simple and crisp, with a gilt outline surrounding the printed lume for a glittering accent. Each of these is flanked by small applied rectangular indices in bronze. The central hour and minute hands are rendered in bronze, with an unusual design midway between straight swords and paddle hands. Both the triangle tipped GMT hand and the second hand are outfitted with pops of flaming red, bringing a punch of vibrant color to the already warm overall palette. The only major disruption of visual balance here is the 4:30 date window, which detracts heavily from an otherwise very symmetrical layout. 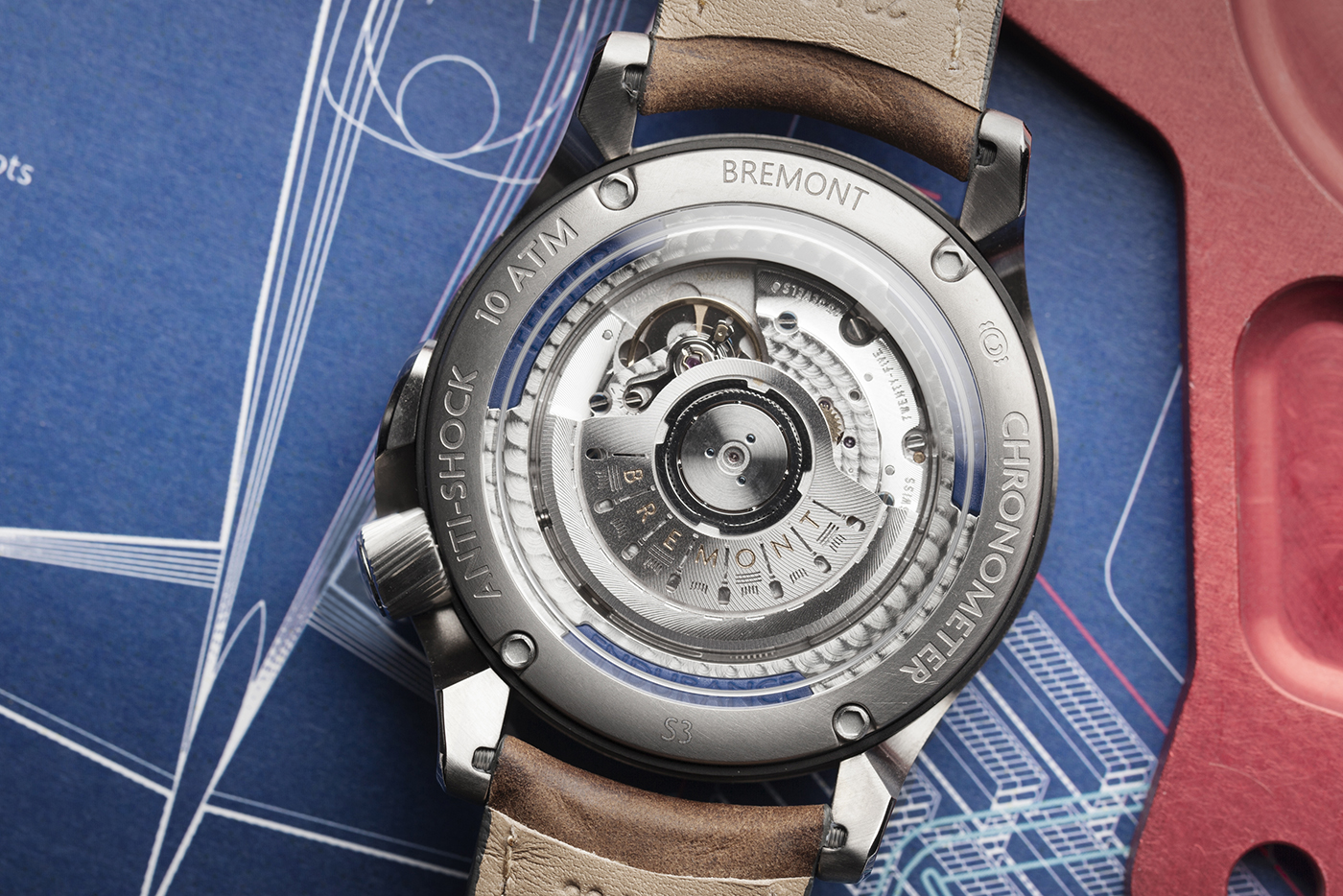 Bremont powers the ionBird with its ETA 2893-2 based BE-93-2AV automatic GMT movement. Like so many Bremont movements, the BE-93-2AV is COSC chronometer certified for accuracy, with a 42 hour power reserve and a 28,800 bph beat rate. Decoration is handsome if rather simple, with perlage across the movement plates and bridges topped by Bremont’s radial engine inspired signed rotor. 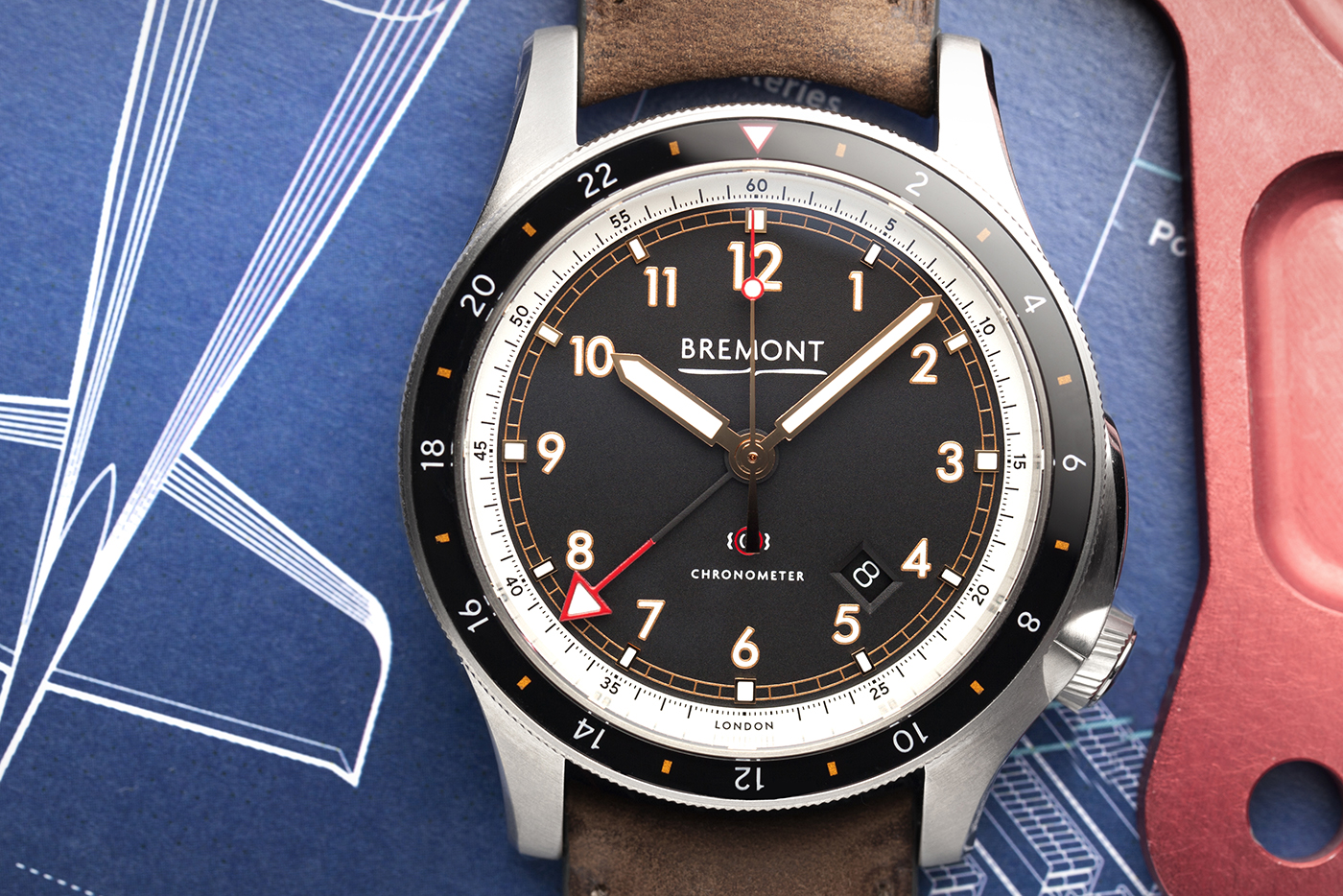 While Bremont is releasing the ionBird with a simple brown nubuck strap, the brand has plans for an additional strap option designed specifically for the needs of Rolls-Royce’s upcoming record attempt. Dubbed the Alerting Strap, this new concept will connect via Bluetooth to an upcoming Bremont app to provide pilots with checklists, timing information, and other augmented data intended to aid efficiency in a modern aircraft cockpit. According to Bremont, the Alerting Strap will notify wearers with a “tap on the wrist” once certain timing limits are reached. While this is ostensibly designed for an exceedingly narrow demographic, it’s easy to imagine this alerting concept spreading to other app-connected timing alerts in the future. 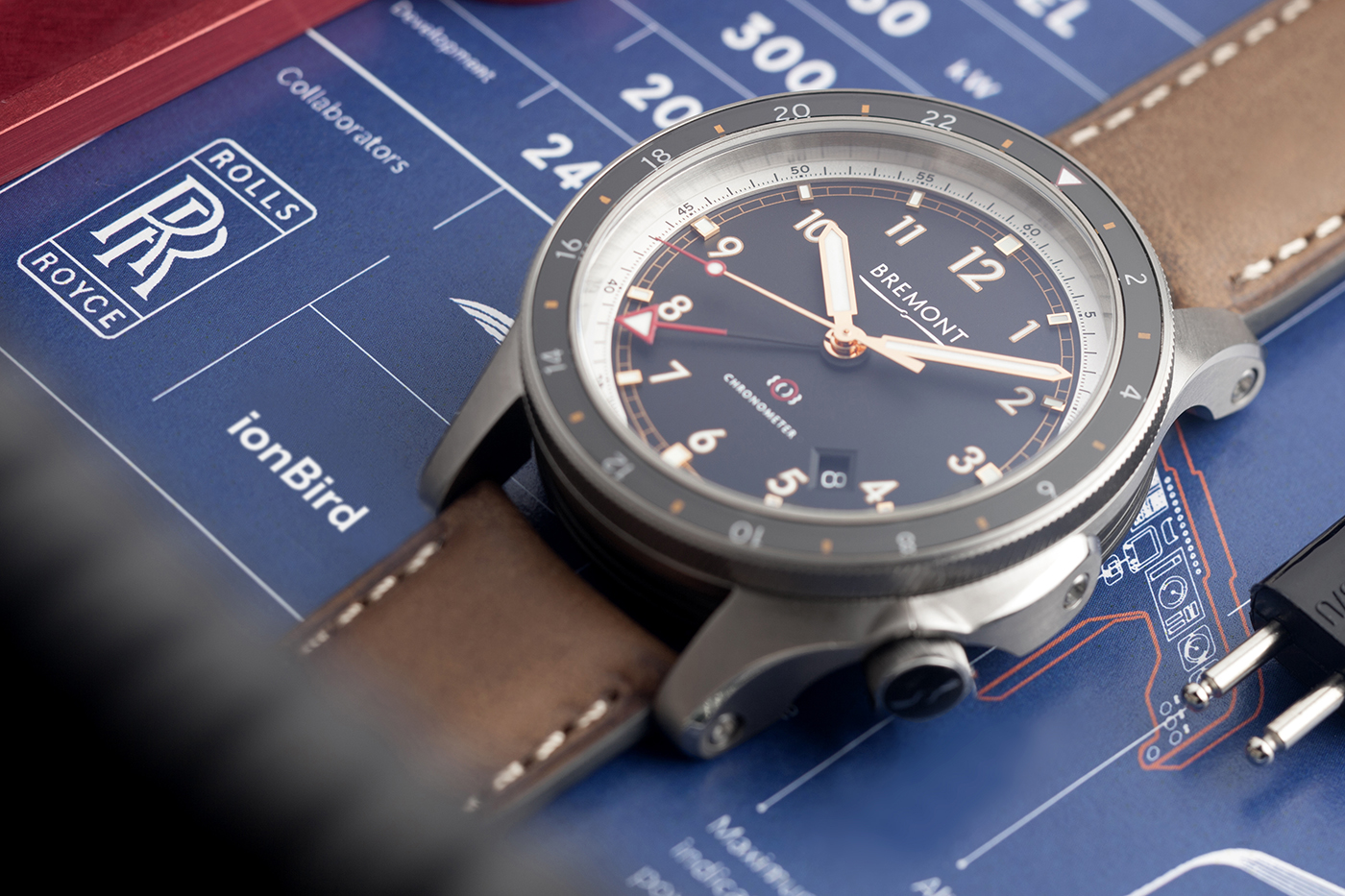 As a celebration of its first ever partnership with British aviation giant Rolls-Royce, the Bremont ionBird combines both classic aesthetics and a novel connected concept for a unique synergy of past and present. The Bremont ionBird is available now through authorized dealers at an MSRP of $5,795. For more information, please visit the brand’s website.