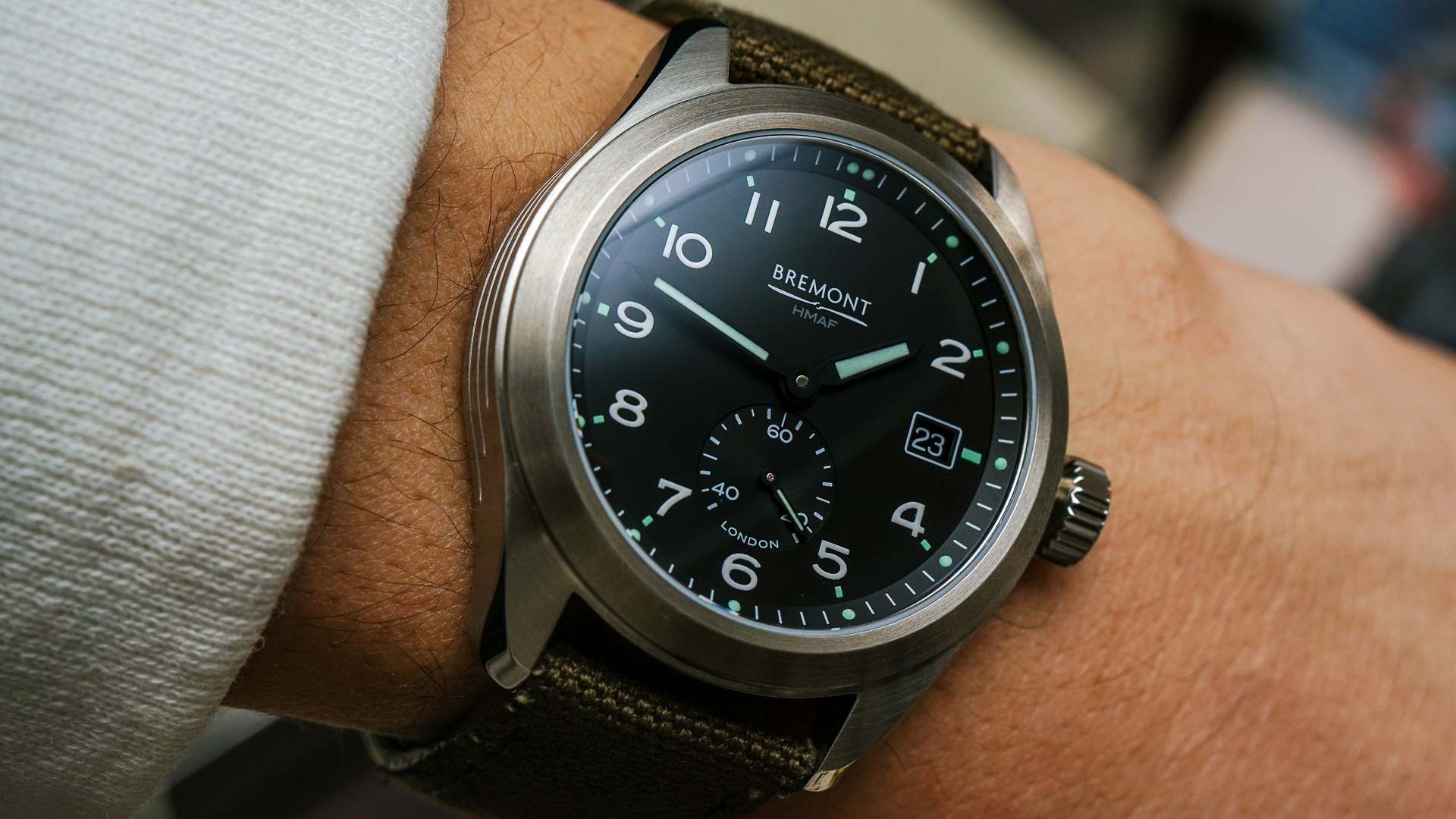 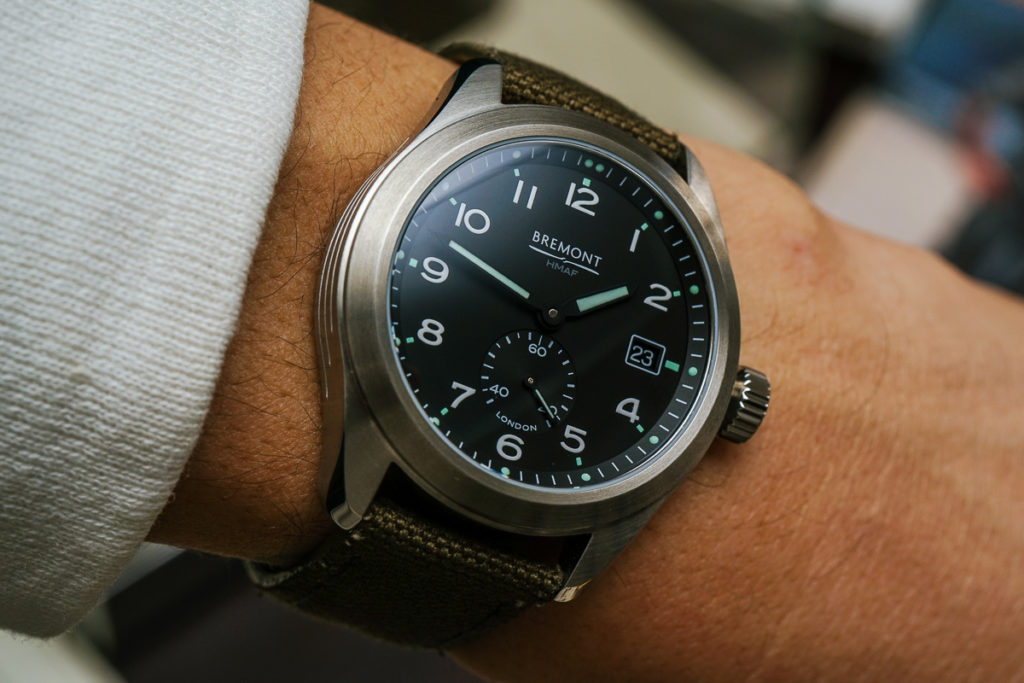 Here’s a crazy number: according to co-founder Giles English, 25% of Bremont’s total business is with the military. It’s a figure that has steadily grown over the last decade, through hundreds of partnerships with a wide variety of military units around the world, including high-flying fighter squadrons, ocean-combing clearance divers, and secretive special-forces units all counted amongst Bremont’s customer base. Oddly, Bremont never really had aspirations to be such a sought-after supplier of military watches, but its destiny was sealed when, early on, while pursuing the development of what would later become its signature anti-shock movement technology, the brand’s founders Nick and Giles English were introduced to Martin Baker. With deep connections to air force units all around the world, the legendary ejection seat manufacturer would soon provide a unique opportunity for Bremont to create its first squadron watch — a special edition for U2 spy plane pilots — and the rest was history. This would set in motion a 10-year run of military collaborations and side projects that have culminated in a formal and exclusive partnership with one of the world’s biggest militaries: Her Majesty’s Armed Forces. 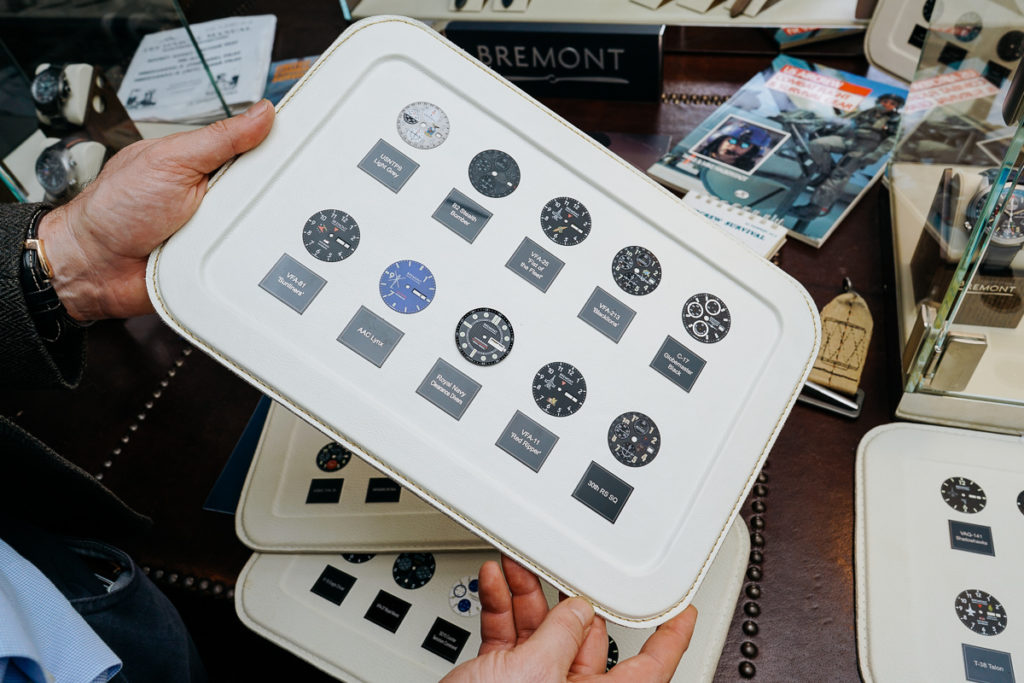 It’s very important to note that these three new Armed Forces watches are not military-issue in the traditional sense. Granted, Bremont’s reputation in the global military community rightfully earned it the blessing of HMAF, who did collaborate in the overall design of the collection, but the watches themselves weren’t formally commissioned or purchased by the Ministry of Defence for field use (despite each being more than capable, in its own right). It still doesn’t undermine the significance of Bremont becoming the first watch brand to produce watches bearing the official insignias of all three branches of the HMAF: Great Britain’s Army, Navy, and Air Force, exhibited in deep relief on each of the casebacks. 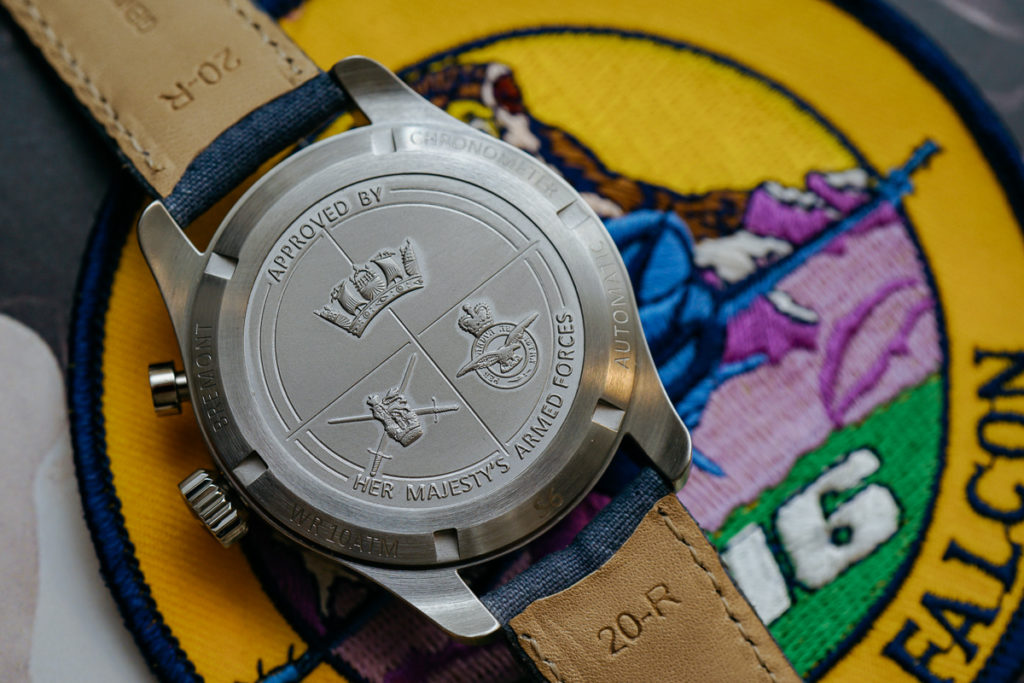 It shouldn’t come as a surprise that these aren’t issued watches; after all, the relatively disposable, albeit reliable, quartz-driven alternatives deployed in most combat zones are a far more economical choice for military budgets. Still, that hasn’t stopped the proliferation of luxury automatic watches bearing insignias of various armed force units, or official NATO Stock Numbers (NSN) etched on casebacks of watches never formally contracted, both of which can be licensed or registered with relative ease and at a nominal cost, usually with the intent of forging provenance. The most in-demand names of certain spec-ops groups like the Navy SEALS usually yield the biggest offenders (c’mon, did the SEALs ever really deploy with that Master Compressor on wrist?), but the allure to collectors and watchmakers, alike, is impossible to deny. 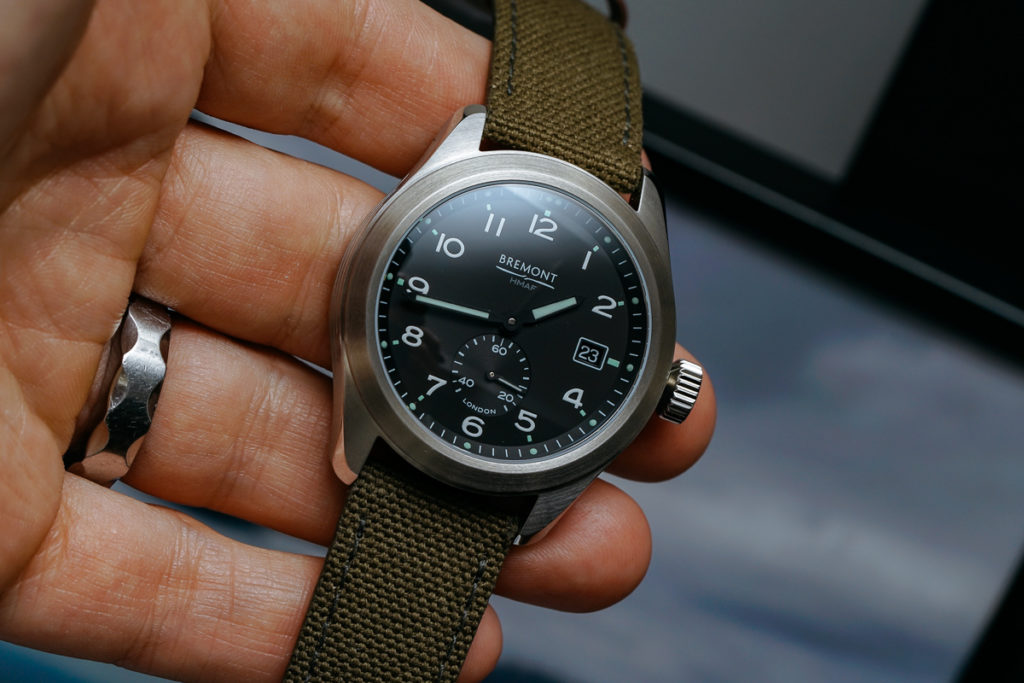 But actual military-issued watches — those with the provenance that make them so highly sought-after in the collecting community — often come from humble, unintentional beginnings. Spartan design, practical, purpose-built capability, and just the right amount of luck are often the magic ingredients that represent a lineage earned, and not bought. It’s what once worked for Longines, IWC, Omega, and for the rest of the “Dirty Dozen” watches issued to the MoD before and during WWII that would later become vintage military watch lore. But in a way, it’s been with a similar formula, though via a slightly indirect path that has also established Bremont as a trusted supplier to various militaries around the world. 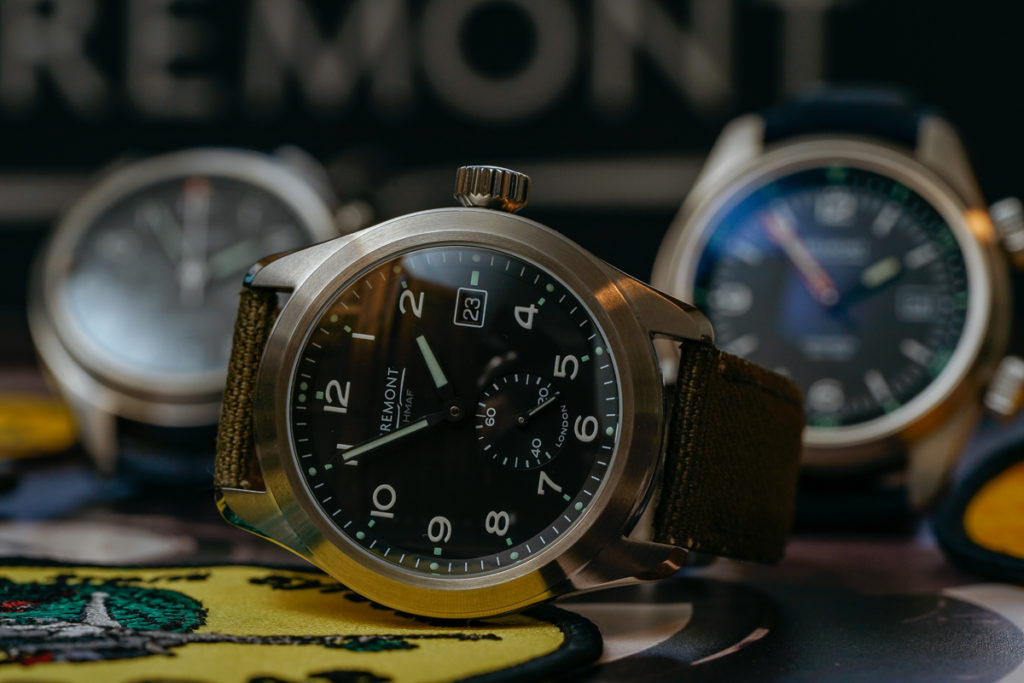 Notably absent in all three of the HMAF watches is the Ministry of Defence’s classic “Broad Arrow” motif, a key dial signature on each of the Dirty Dozen watches. The reason for this is quite simple: that arrow belongs on products that are purchased, and therefore owned by, the MoD. Any other use of that mark outside this relatively specific context is technically illegal by British law. Now, none of these Bremont watches bears the Broad Arrow, as they were not purchased by the MoD for a military contract (i.e., for issue to military units in the field). However, that doesn’t mean the Armed Forces wasn’t still involved in the process. Each branch did provide specific design input for its respective watch: the Army for the Broadsword, the Navy for the Argonaut, and the Royal Air Force for the Arrow monopusher chronograph. 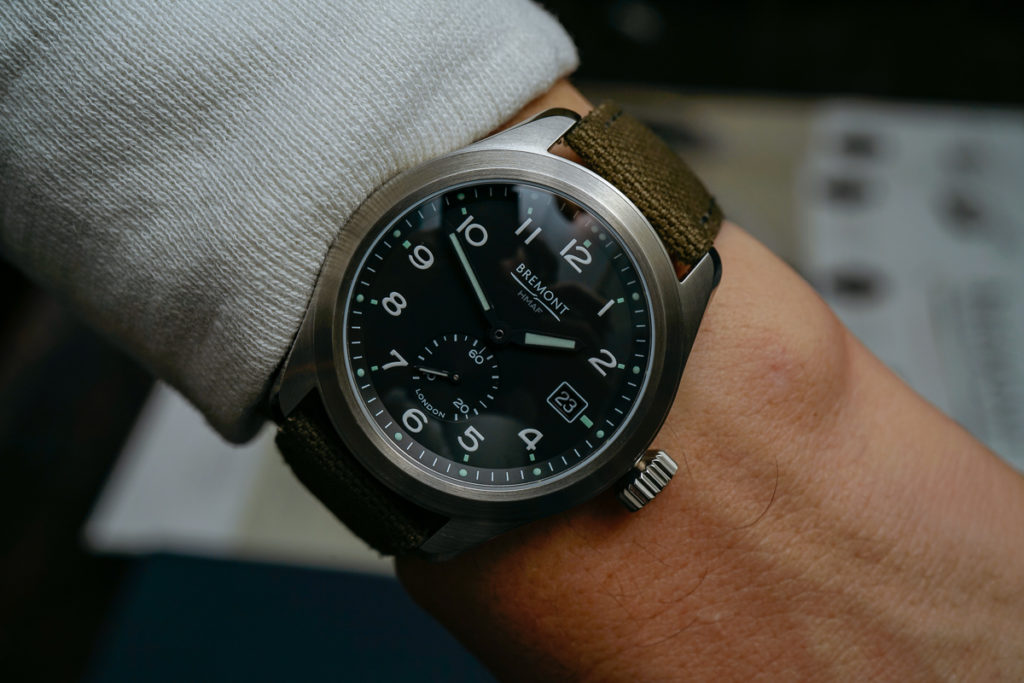 The collection is led by the new Broadsword watch, a contemporary interpretation on the classic three-hand military watch aesthetic pioneered by the Dirty Dozen. Granted, the case is a touch larger now (40mm) than those original MoD-issued watches, but it maintains the matte Arabic numeral dial and small seconds at 6 o’clock. The watch is powered by Bremont’s BE-95-2AE Chronometer-certified movement (which uses an ETA 2892 base) and is the same as used in most of the brand’s current three-hand models, like the Airco Mach 3. A snailed subdial and sloped chapter ring with 12 green luminous dots help lend a bit of depth and texture to the dial itself, but overall, it’s a relatively spartan execution, lacking the ornamentation or flourish traditionally found at this price-point – as it should be, though, for a watch of this ilk. 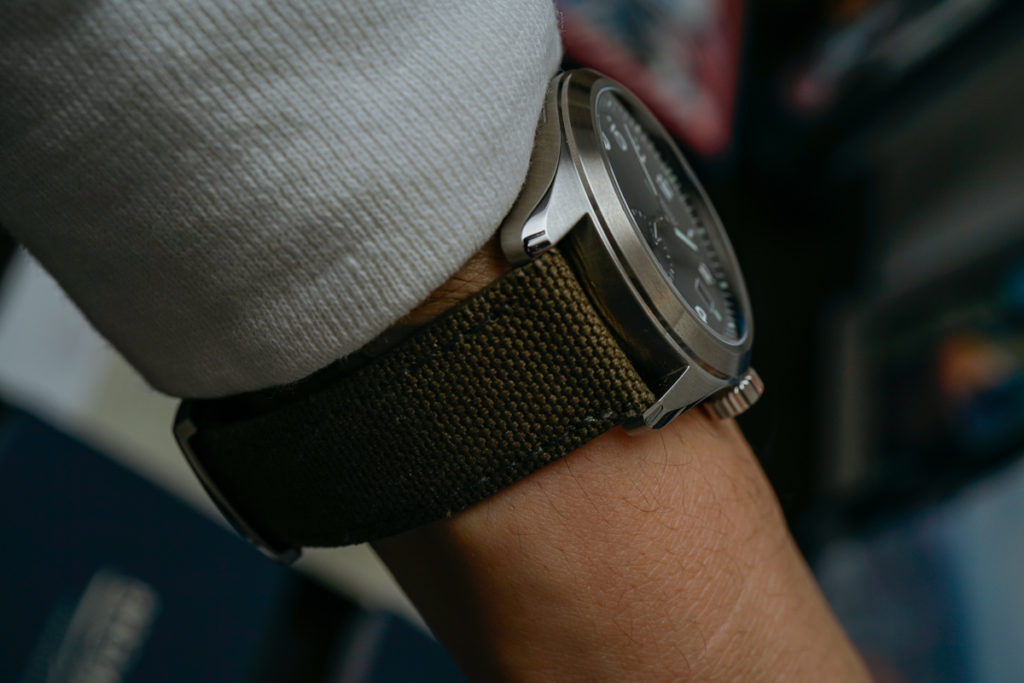 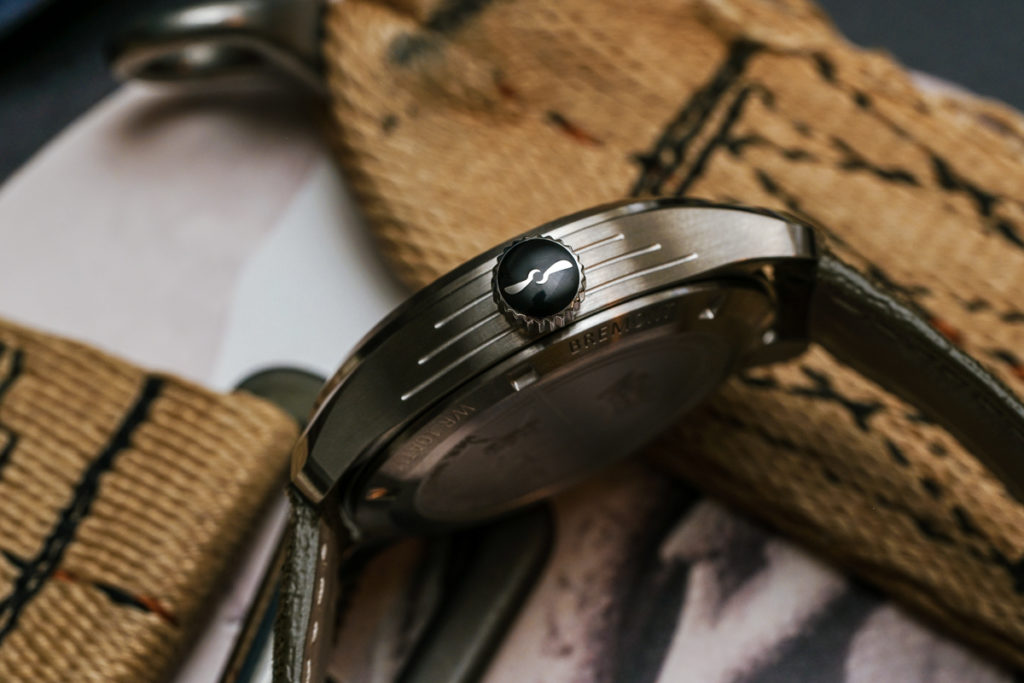 Even still, the hardened stainless-steel case does feel distinctly overbuilt in a “Bremont” sort of way, with its 100 meters of water resistance and semi-twisted, polished lug facets — all this, despite lacking the brand’s textured mid-case barrel, which has long been a signature of the multi-piece Trip Tick case design. This is a relatively standard two-piece case architecture, though, which helps bring the price-point down, effectively creating Bremont’s newest entry-level offering priced at $3,450. The case, itself, is still machined in Bremont’s London manufactory from singular stainless-steel bars and has undergone Bremont’s proprietary hardening process, rendering it five times harder than standard stainless steel. Both the case sides are finely brushed, and exhibit a trio of deep grooves designed to evoke the sides of an engine’s piston. Overall, the Broadsword carries a surprising weight to it – that of a stout tool watch, despite its relatively small footprint on the wrist. 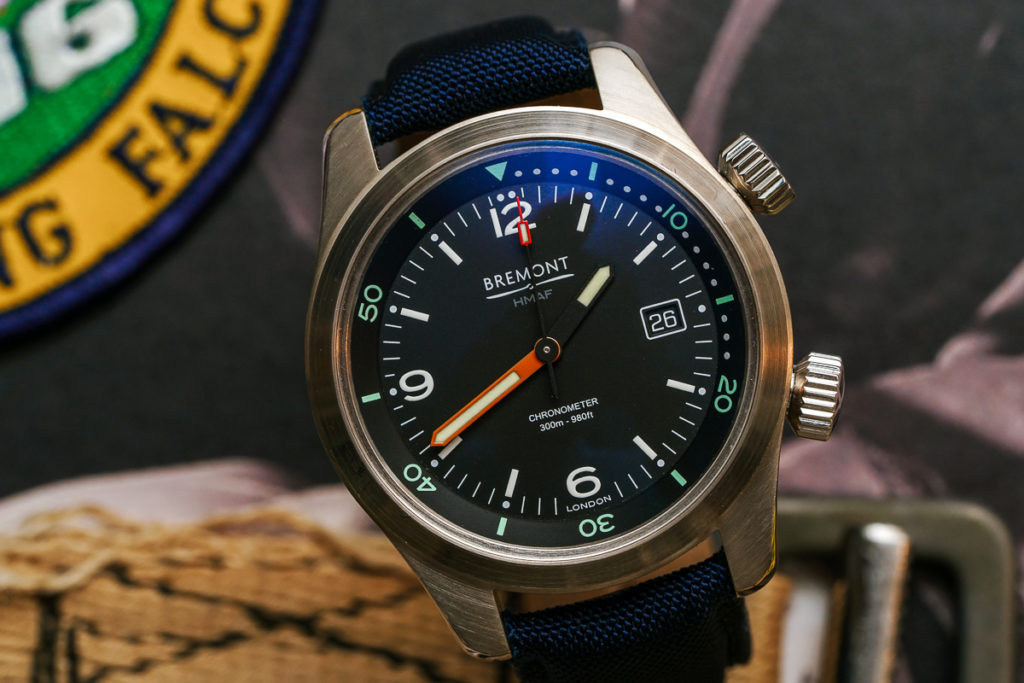 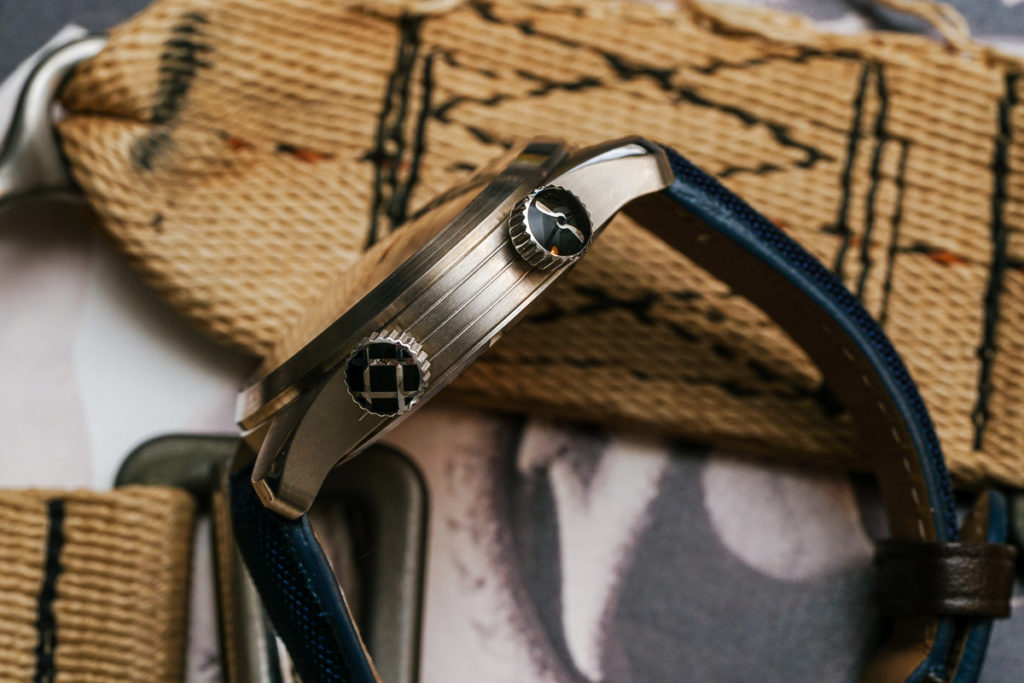 The Royal Navy gets a proper dive watch — the 42mm Argonaut, which brings a 300-meter water resistant compressor-style case design and an inner rotating bezel to the mix — a new combination for a Bremont dive watch. Inner rotating bezels are commonly found throughout the Bremont collection, particularly on the MB series of watches, which use Bremont’s patented “Roto Click” bezels that rotate in both directions on ceramic bearings. As a dive watch, the Argonaut’s bezel is only uni-directional and doesn’t use the same Roto Click bearing design, though each of its 60 clicks is still positive, and plenty confident. 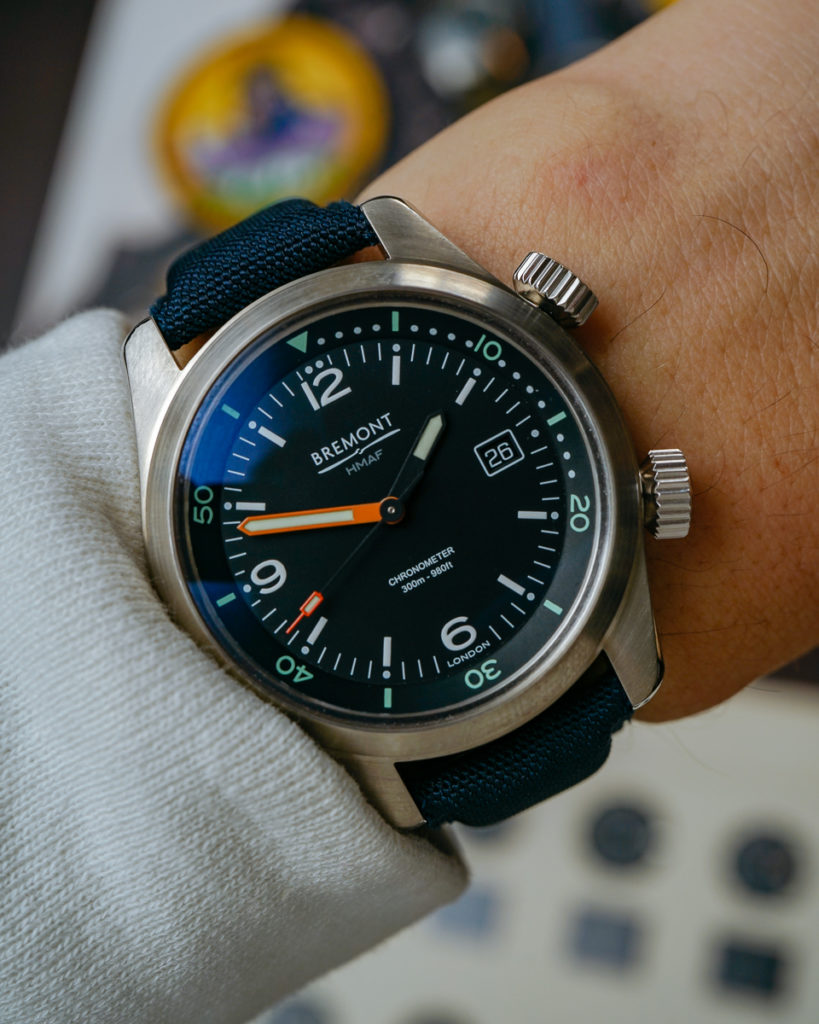 Despite using the same typography and case architecture as the other two watches, the Argonaut feels like an odd duck. It’s either the most original of the three, thanks to its interesting case and orange, DOXA-esque hour hand, or it’s the biggest departure from the collection’s military theme, due to the bezel design and heavy use of color throughout. Like the Broadsword, the watch is powered by a Chronometer-certified automatic movement, and its proportions are classic and compact, wearing with a similarly confident heft, but quite easily, even on a smaller wrist. 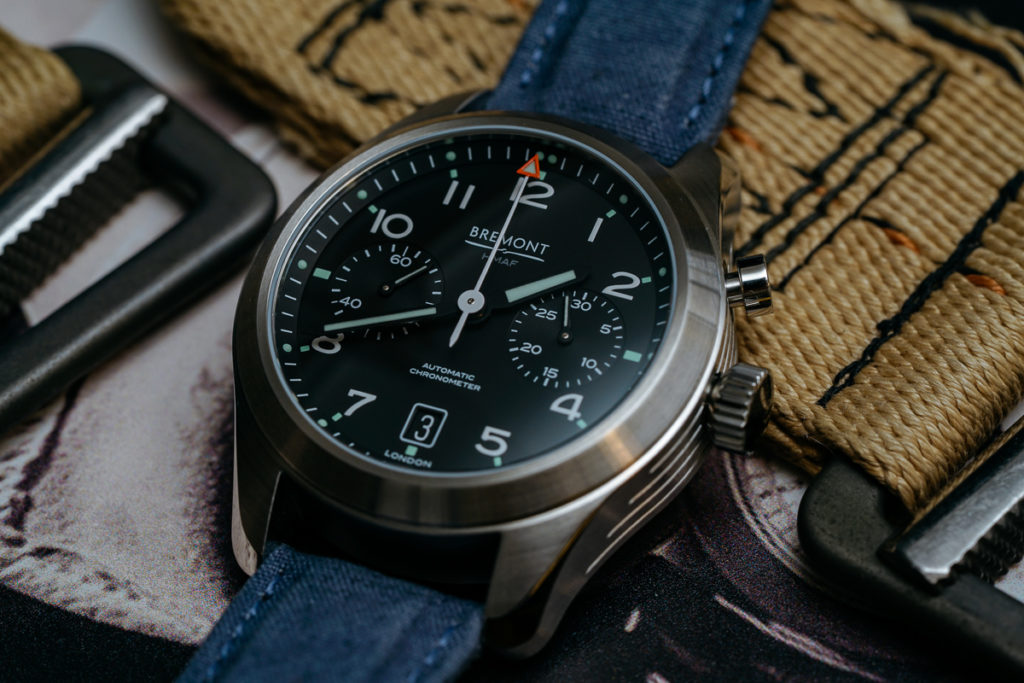 Lastly, the Arrow – the Royal Air Force’s 42mm chronograph — is characterized by its super-simple bi-compax register layout and single pusher at 2 o’clock. At first glance, the 100-meter water resistant case is thick, but it’s no thicker than a Valijoux-equipped Sinn 103 or Bremont’s own ALT-1 chronograph and is spared on the wrist by its relatively merciful lug-to-lug length. Like the Broadsword, the dial is fitted with the same sloped, luminous rehaut, and 20/40/60-second counter. A 30-minute totalizer at 3 o’clock and a date aperture at 6 o’clock round out what amounts to a very nicely balanced, classic chronograph execution. 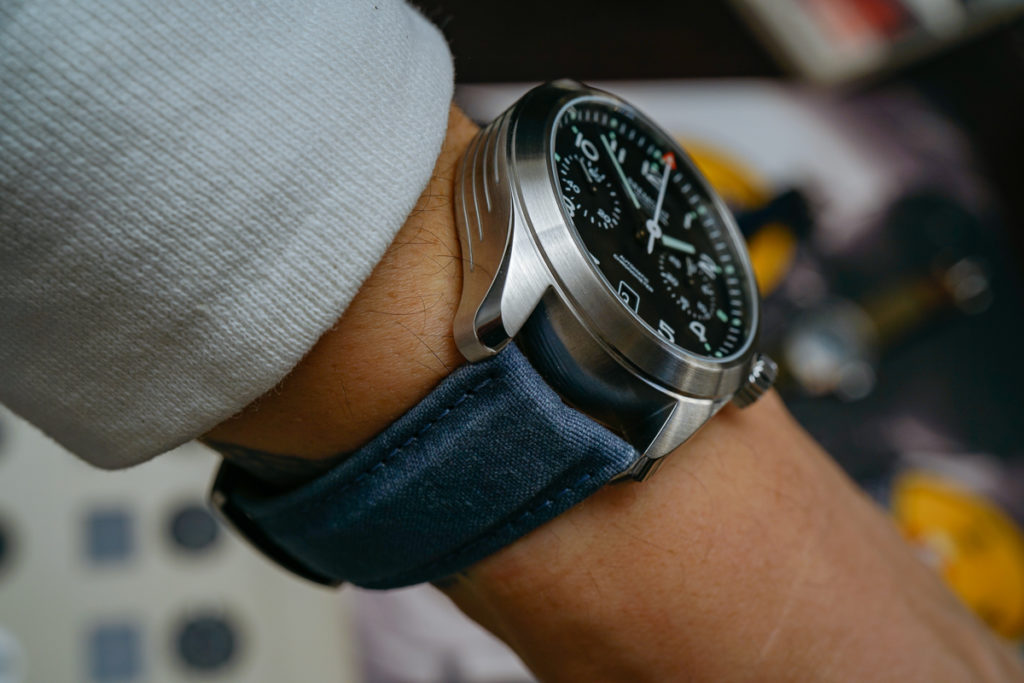 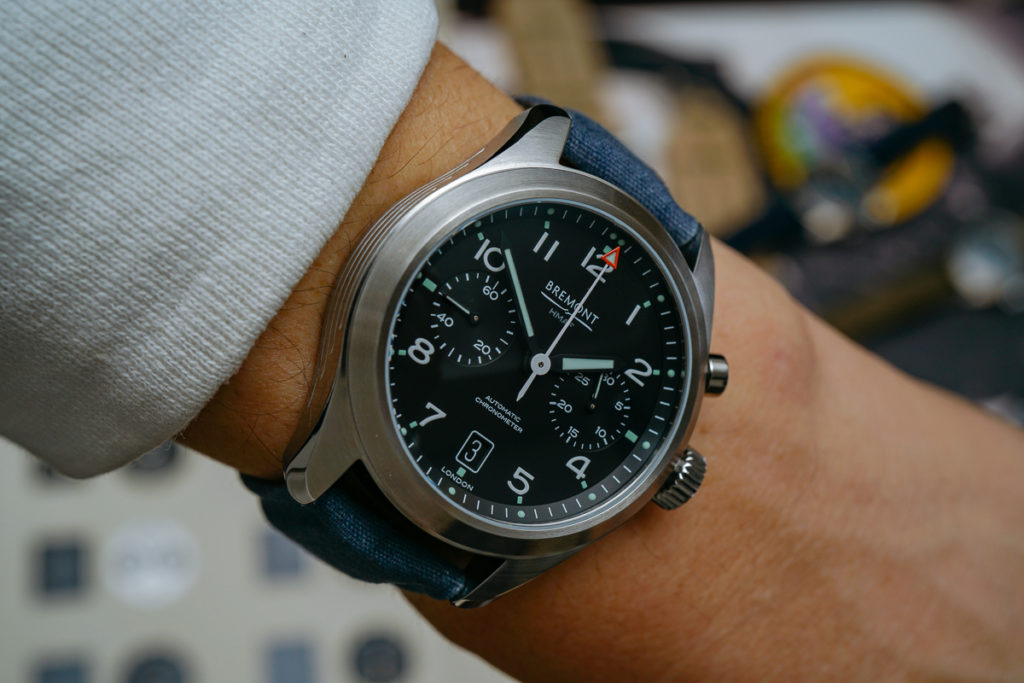 As Bremont’s first monopusher, the Arrow is built using the BE-51AE, which appears to be a modified 7750. Rather than utilizing a dedicated start/stop and reset pushers, everything is done through one pusher alone. Simply click to start, click again to stop, and click a third time to reset. A fourth click starts the chronograph over again. It’s an infrequently seen complication, and though maybe not quick enough for racing applications, it’s neatly tailored here as a mission timer and a natural inclusion in the collection. 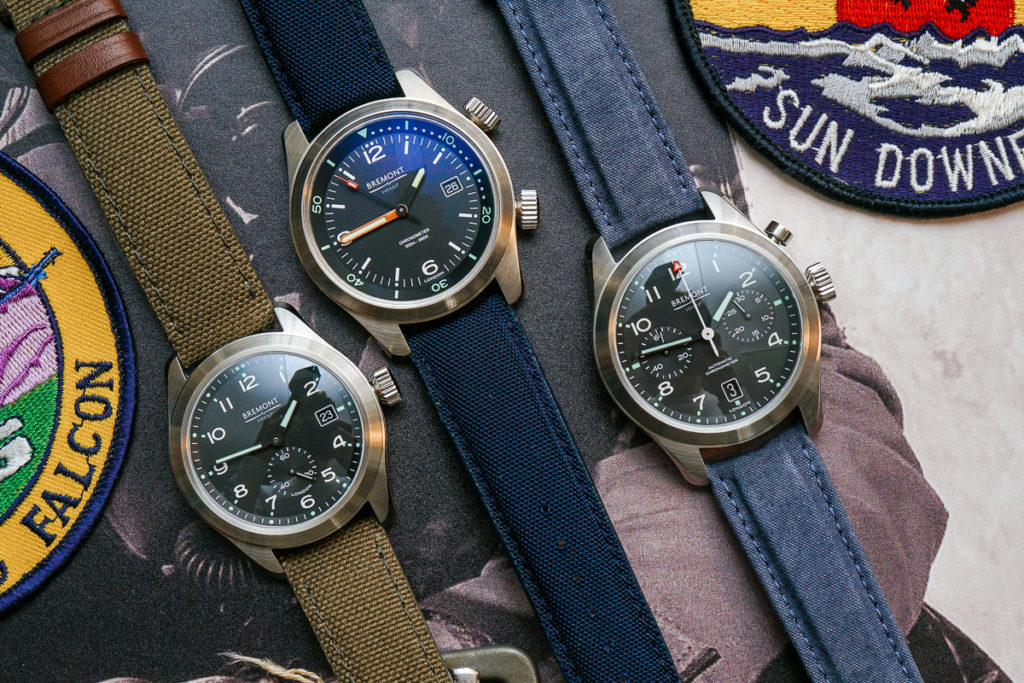 Whether or not you ascribe to military watch history (British, or otherwise), Bremont’s growing place in its timeline is growing increasingly difficult to ignore. And with no notable shortcut used to yield the HMAF partnership, what you’re looking at represents a pretty significant milestone and a potentially exciting harbinger for future collaborations. Price for the Bremont Broadsword £2,595, the Bremont Argonaut is £2,795, and the Bremont Arrow is £3,595. You can learn more about the Armed Forces watch collection over at Bremont.com.