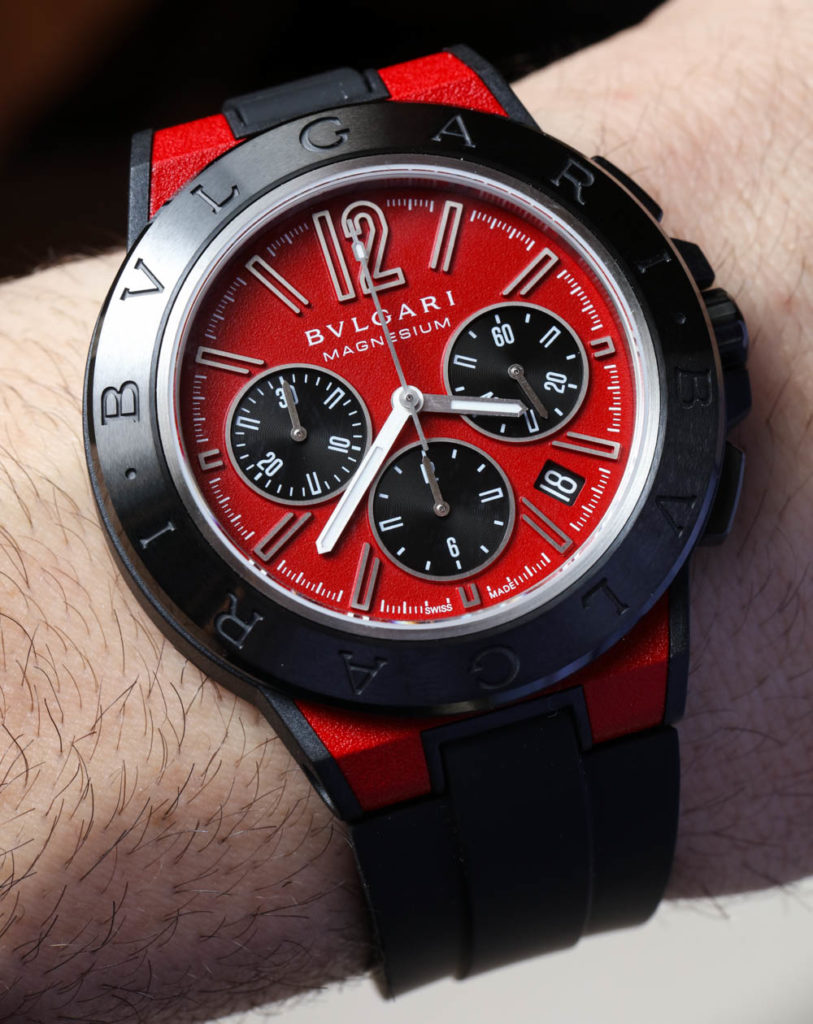 If you like modern chronograph sport watches, it might be in your best interest to take a good look at the new-for-2016 versions of the Bulgari Diagono Chronograph collection. In the past, Bulgari hasn’t been shy about producing a vast range of Diagono timepieces, as the Diagono collection continues to be possibly their best selling range. With that said, the Diagono has a new family of watches introduced last year with the Bulgari Diagono Magnesium (hands-on here). Now, for 2016, we see the arrival of the Bulgari Diagono Magnesium Chronograph – and I think it’s a winner for people who like what the concept is all about. 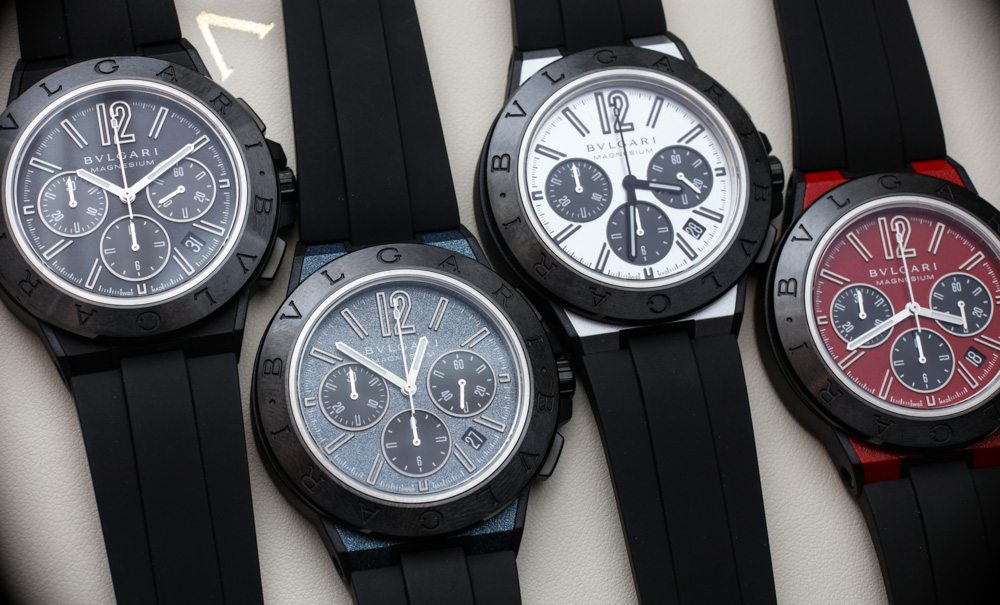 A lot of the Bulgari Diagono watches you’ll see out in the wild (I personally see quite a few) have cases with aluminum. Bulgari began to use the lightweight metal for parts of many Diagono watch cases starting in the late 1990s. Aluminum was chosen for its light weight and because, at the time, it was “different.”

Like aluminum, magnesium is a lightweight metal, but it is also harder and, I am pretty sure, a bit more expensive. Magnesium as an element also happens to be flammable, which is why you don’t see it in more industrial applications. With that said, I don’t think there is much worry about your watch catching on fire – especially because as you can see, the magnesium on these watches is coated with various colors. 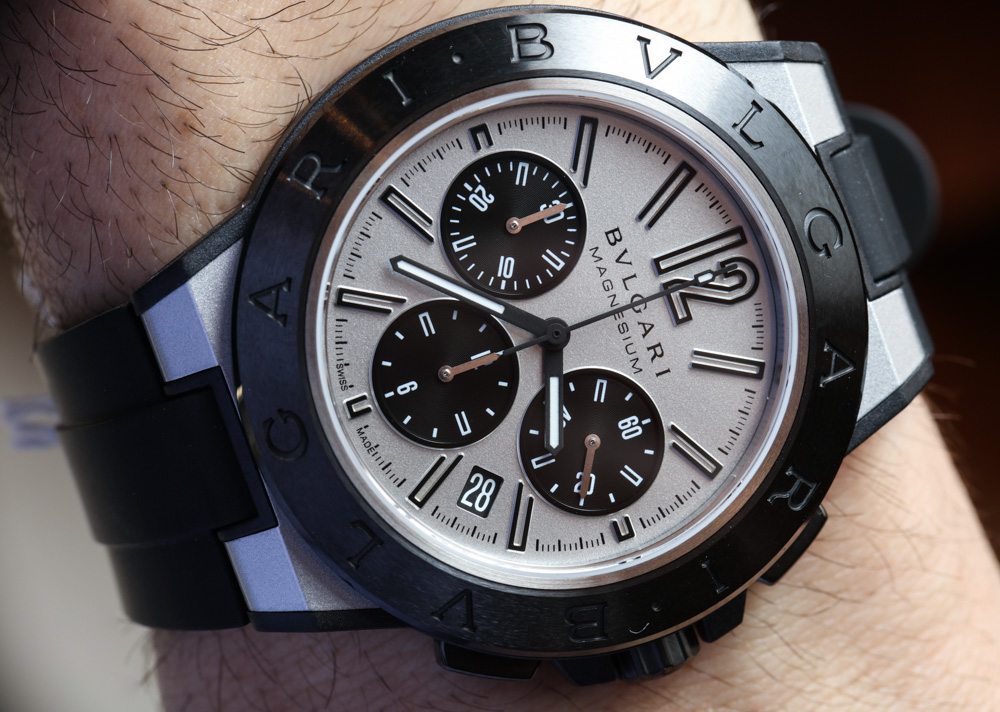 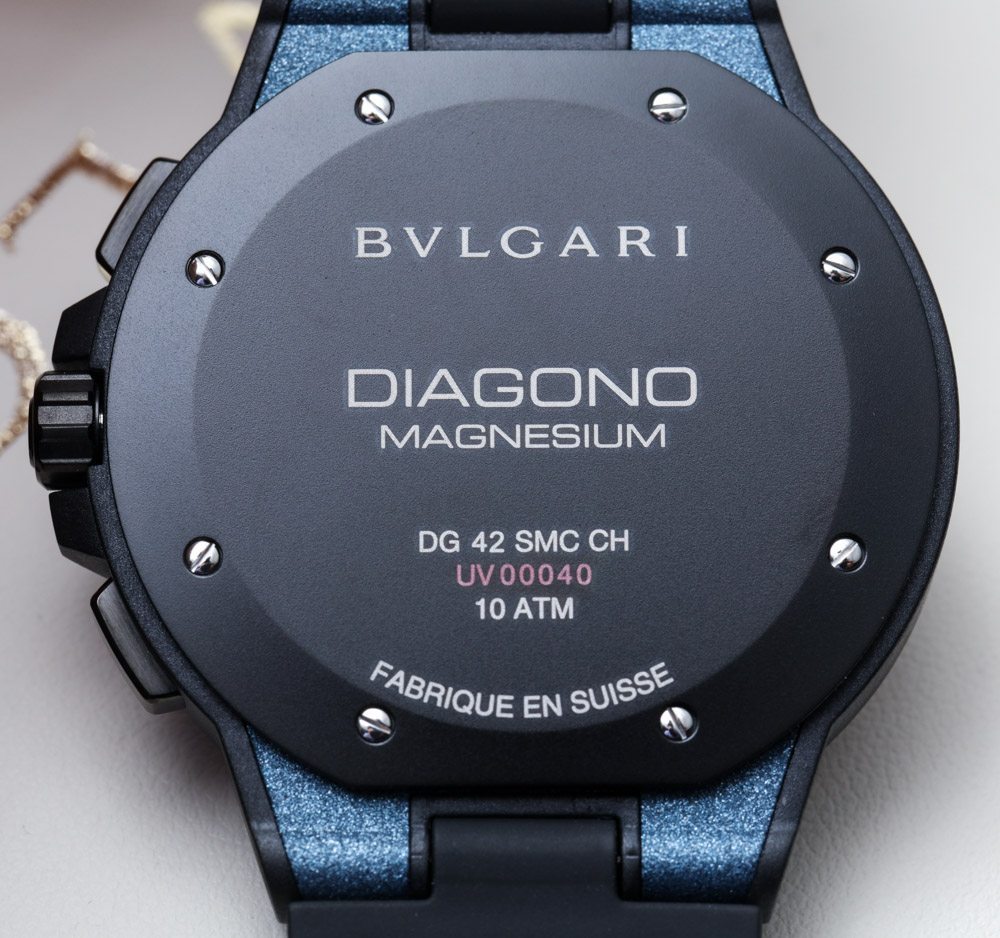 While checking out the new Bulgari Diagono Magnesium Chronograph watches, an interesting thought occurred to me… that in a sense these models have a very similar appeal as the original Hublot Big Bang watches did back in the early 2000s. In design, a bit, but also in the focus on using a lot of materials to emphasize the modern appeal of the watches.

Today, Hublot and Bulgari are both part of LVMH, but in 2004 when the Big Bang first came out, neither of the brands were. Just saying… At the time, Jean-Claude Biver – in his typical penchant for catchy-sounding phrases – said part of his philosophy of the Big Bang’s appeal was in the “art of fusion.” The idea was that he wanted to use as many different materials as possible in producing the case of the Big Bang. That is why you saw resin, ceramic, steel, titanium, Kevlar, carbon fiber, and other materials used on many of the Big Bang models. One of the more famous early limited edition Big Bang models was actually the “Mag Bang,” which was a Big Bang watch with a magnesium case. 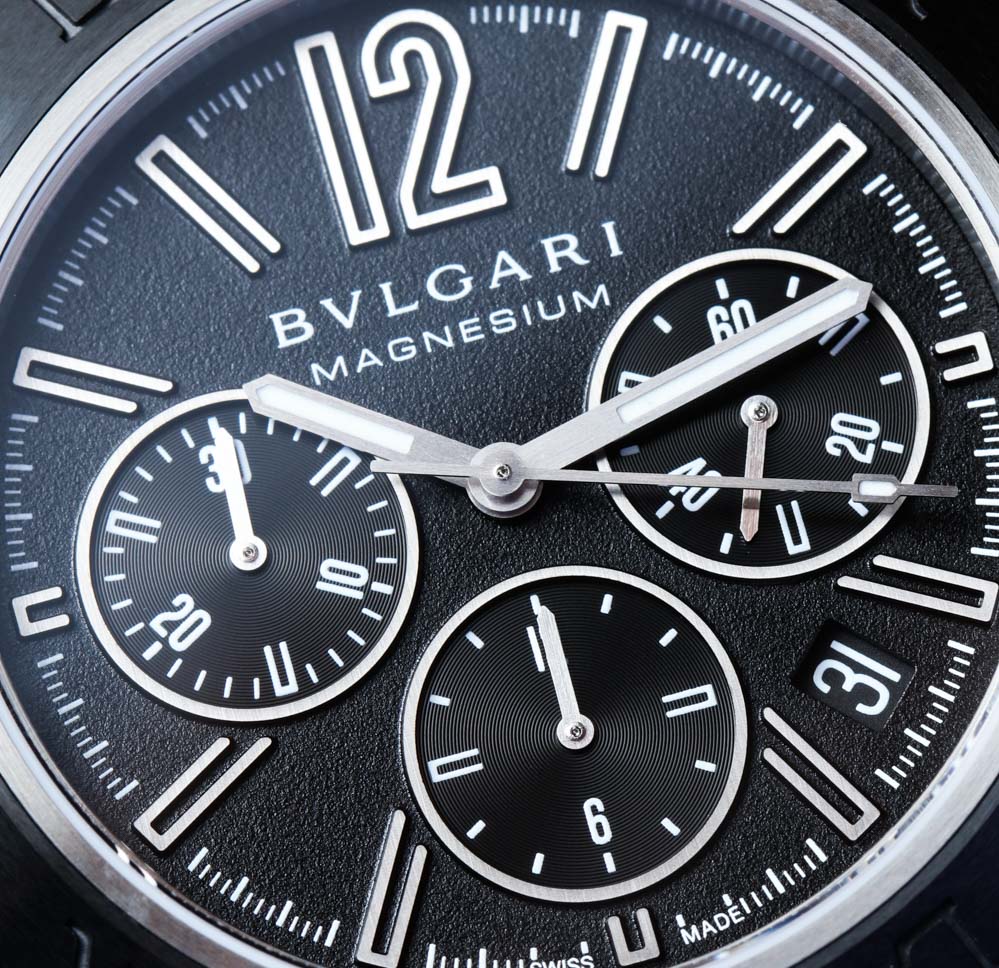 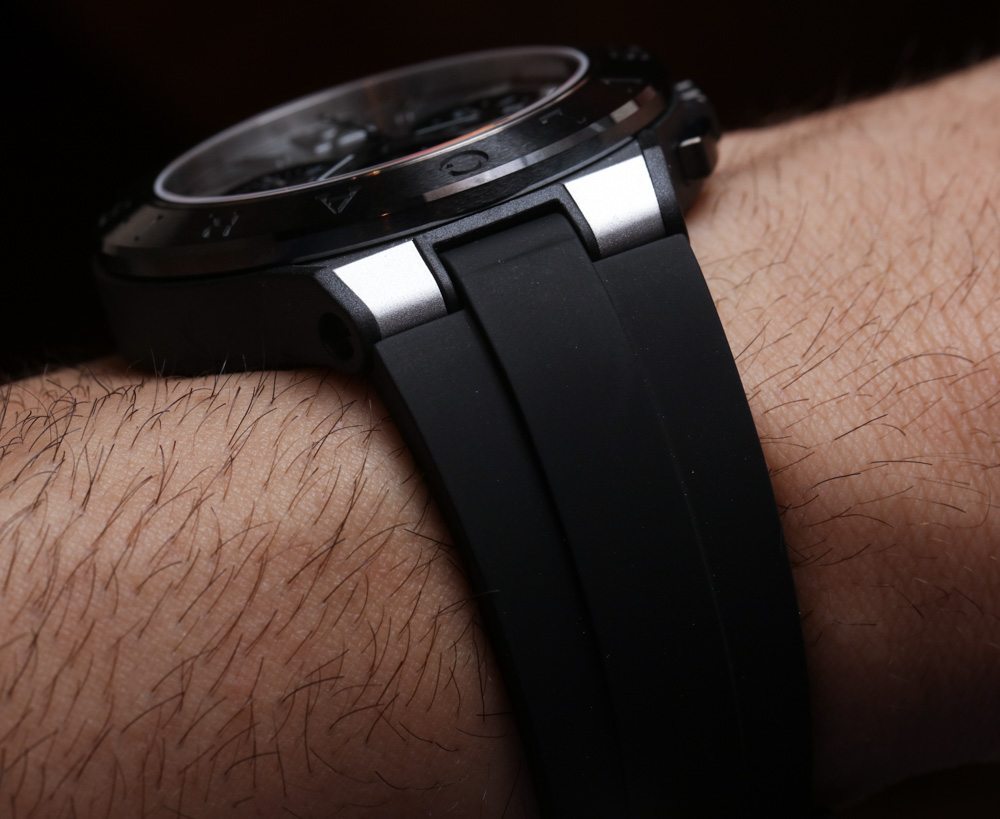 Looking at the core design philosophy and the many materials used in the Bulgari Diagono Magnesium Chronograph, I feel that these two timepieces are thematic cousins. Both are modern, sporty chronographs with bold designs and use a range of materials in their construction. They are also refined but still very masculine in their aesthetic. Unlike the original Hublot Big Bang that was 44mm wide, the Bulgari Diangono Magnesium Chronograph is a bit smaller, being 42.5m wide, thinner than the original Big Bang, I believe, and with a case that is water resistant to 100 meters.

Speaking of “the art of fusion” and case materials, Bulgari certainly decided to go exotic and interesting for its “Mag Diagono.” Also, we get a choice of various color styles this year. Each Bulgari Diagono Magnesium Chronograph case is constructed with magnesium, PEEK (polyether ether ketone – an industrial thermoplastic polymer used in a range of demanding engineering applications from medical implants to high pressure machinery), steel, ceramic, and rubber (for the strap). 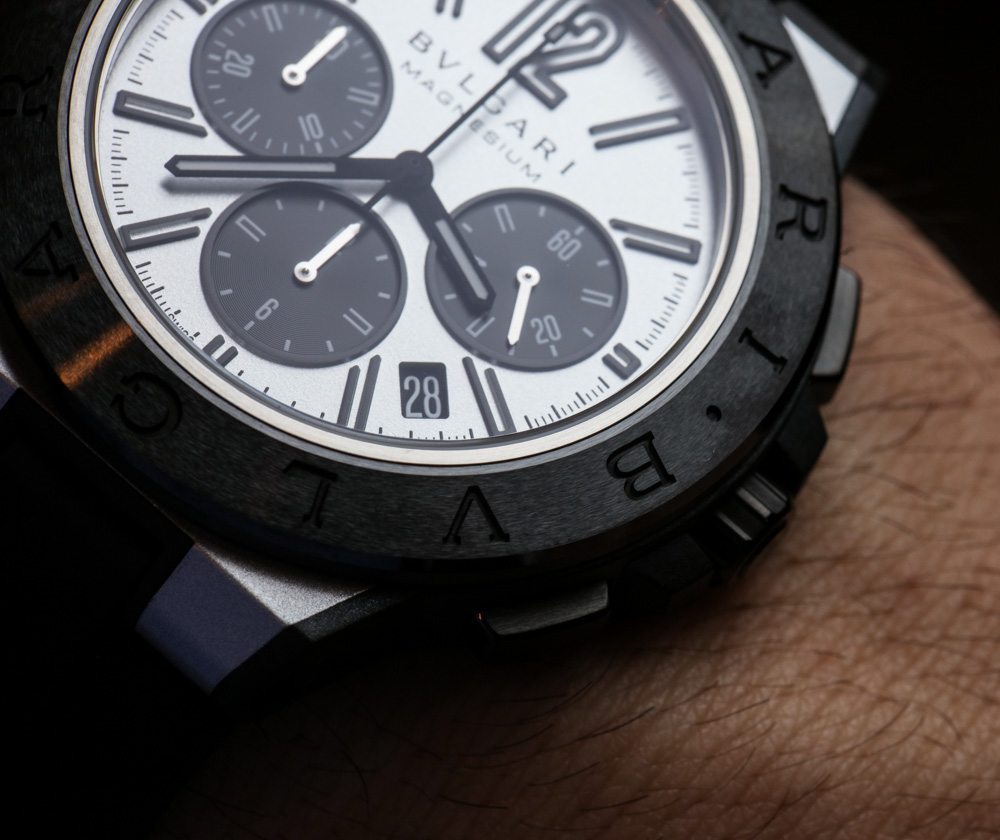 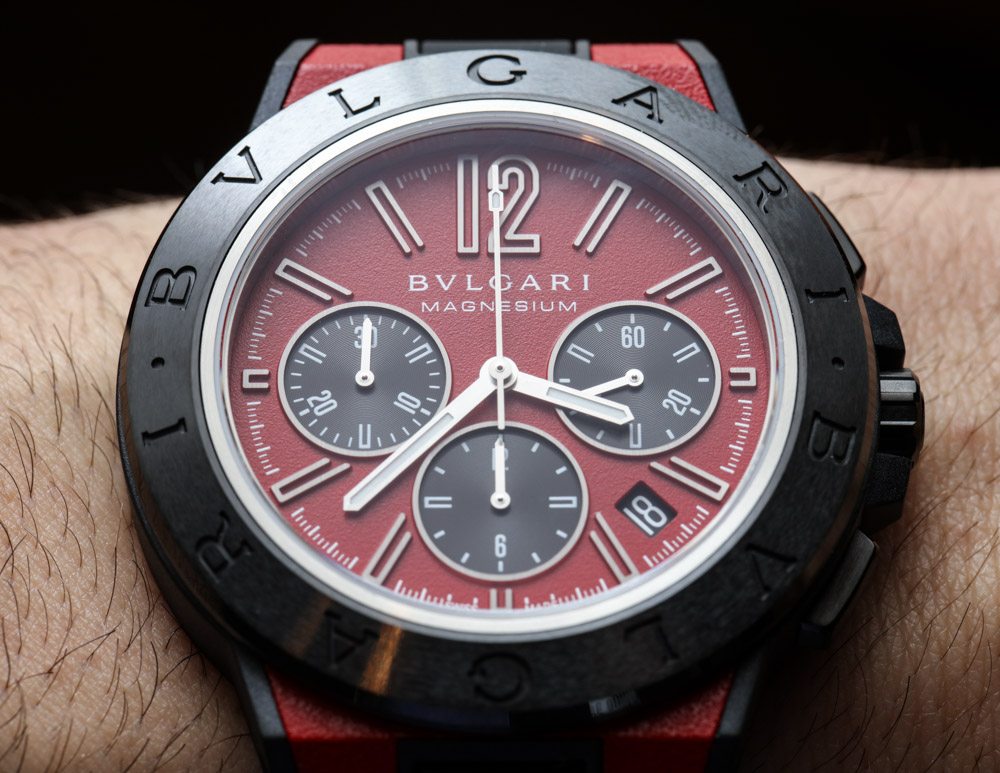 The range of materials, textures, finishes, and colors is impressive, and it’s interesting in the Bulgari Diagono Magnesium Chronograph collection. You can see more visual texturing in the red and blue models, with the black and silver (gray) models being a bit more subdued in both tone and texturing. Bulgari also did a nice job in allowing consumers to opt for something a bit more bold and uncommon like the red model, or to choose something more conservative with the black model. 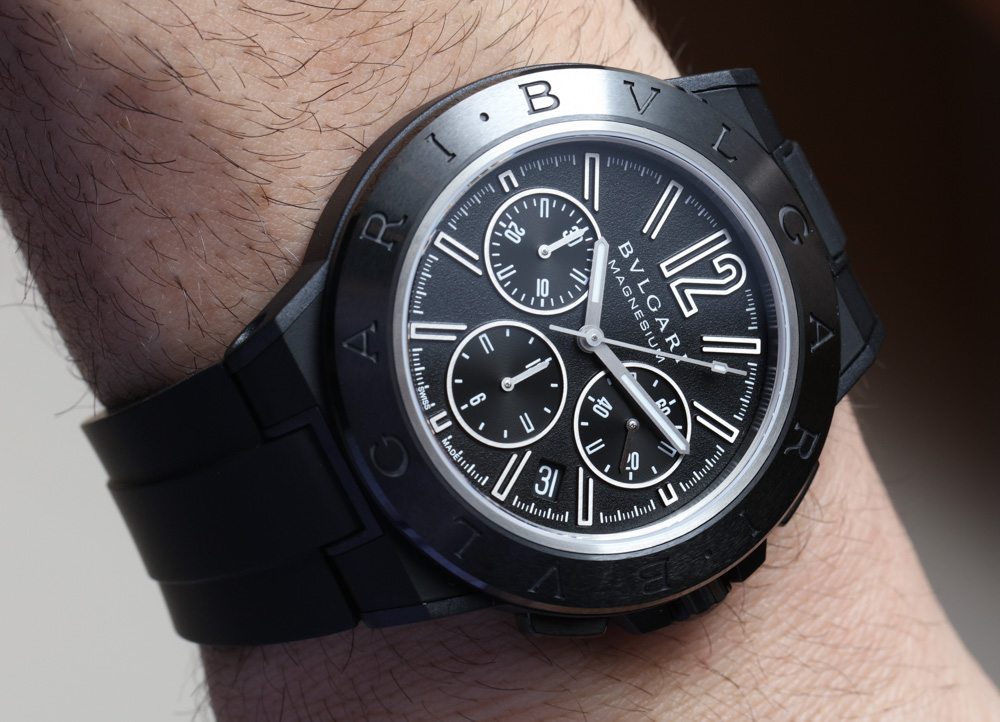 Dial design and legibility is very good. Given that the dial more or less matches the overall proportions of the chronograph subdials, you have a nicely balanced look that feels modern but also classic in its demeanor. Stylized elements abound, but are subtle and take a backseat to the prominence of the hour markers, hands, and subdials. I do feel that the hour and minute hands could have been a tad bit longer, but it isn’t a deal breaker, as the overall look of the Bulgari Diagono Magnesium Chronograph dials and case is very refined, in my opinion. 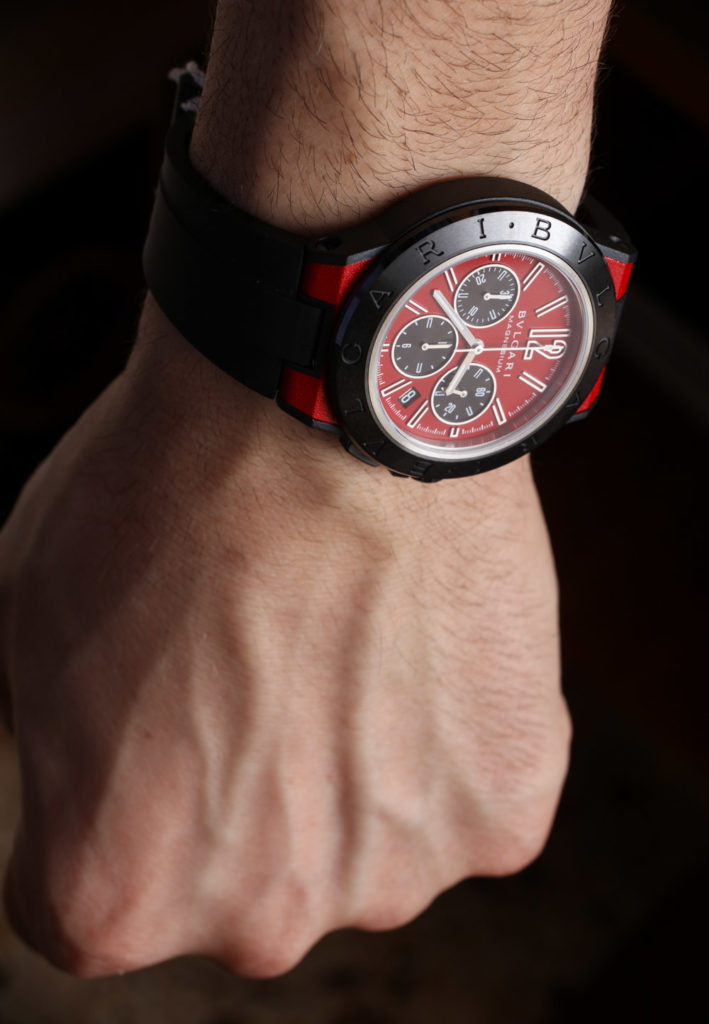 Around the dial of the Bulgari Diagono Magnesium Chronograph watches is a black ceramic bezel with the iconic “Bulgari Bulgari” set of double logos. This is of course branding, but it is such a deep part of this and many other Bulgari watches (originally adopted from the look of ancient Roman coins), that you quickly learn to love it as part of the “Italianness” of the overall look and feel of this Swiss-Made product (from a Rome-based brand). 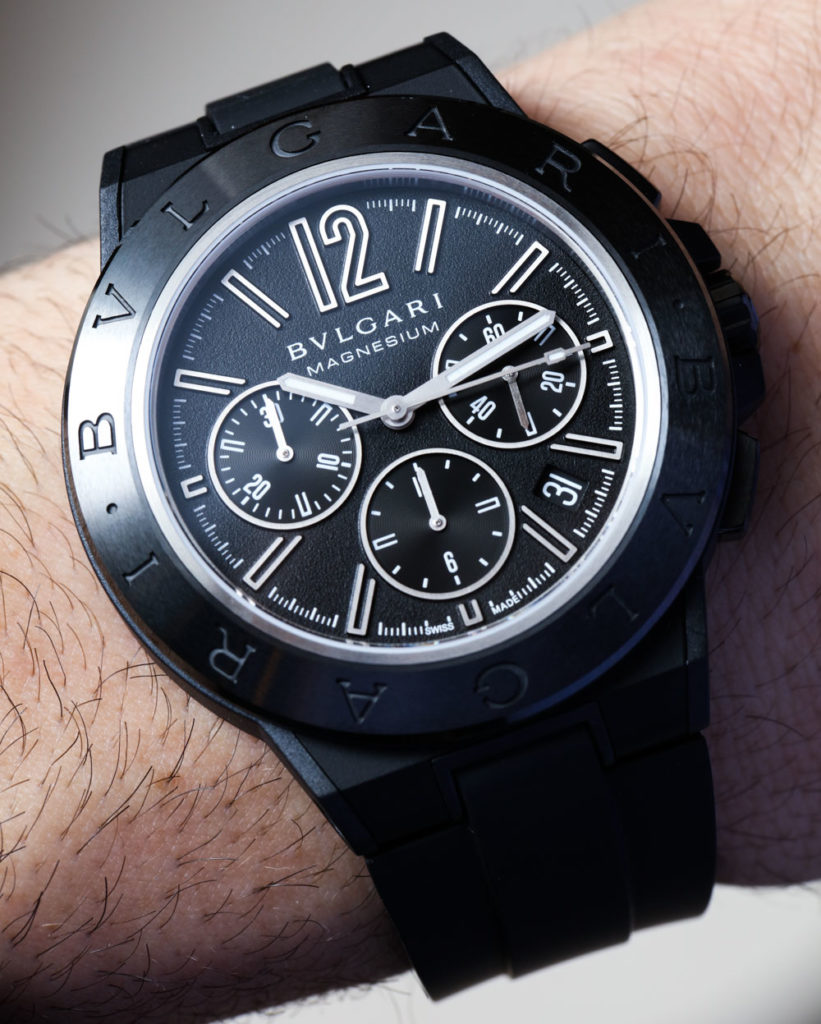 Ceramic is also used as an insert for the crown, which itself is in steel like the chronograph pushers and caseback of the watch. One of my favorite design elements is how the color of the dial continues into parts of the lug structures. The effect is subtle, but you don’t see anything like it often and the impact on the overall design is very positive, in my opinion. The gray, red, blue, and black colors are applied using a material called Motor Lac, which is an abrasion-resistant synthetic automotive paint which is used mostly for things like commercial trucks and industrial vehicles… as well as, apparently, now Bulgari watches.

Inside the Bulgari Diagono Magnesium Chronograph watches is the Bulgari caliber B130 automatic movement which not an in-house caliber, but rather a base Swiss ETA 2894. The 4Hz (28,800bph) movement has a power reserve of 42 hours and includes the time, 12-hour chronograph, and the date. 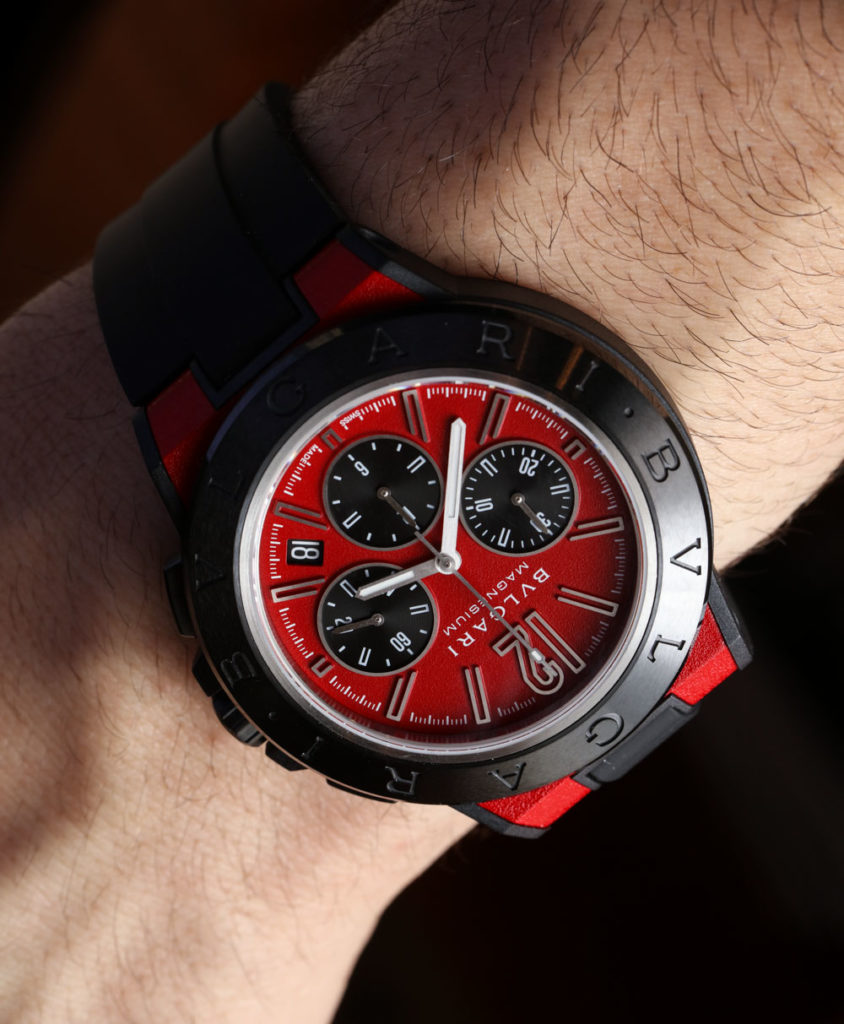 On the wrist, the Bulgari Diagono Magnesium Chronograph feels light and comfortable – which is really the entire point. That it is very stylish and legible is what makes it a winner in my books. Best of all, prices are not nuts, but you will have to choose the color you like. It might also be interesting to see if Bulgari adds a bracelet option in the future in addition to the black rubber strap. For a modern sport watch that is distinctive and good-looking, but will also serve you well, you can easily add the Bulgari Diagono Magnesium Chronograph to your list of options. Reference numbers for the Bulgari Diagono Magnesium Chronograph watches are 102305 for the gray dial, 102428 for the black dial, 102304 for the blue dial, and 102308 for the red dial. Price for each is $4,950. bulgari.com