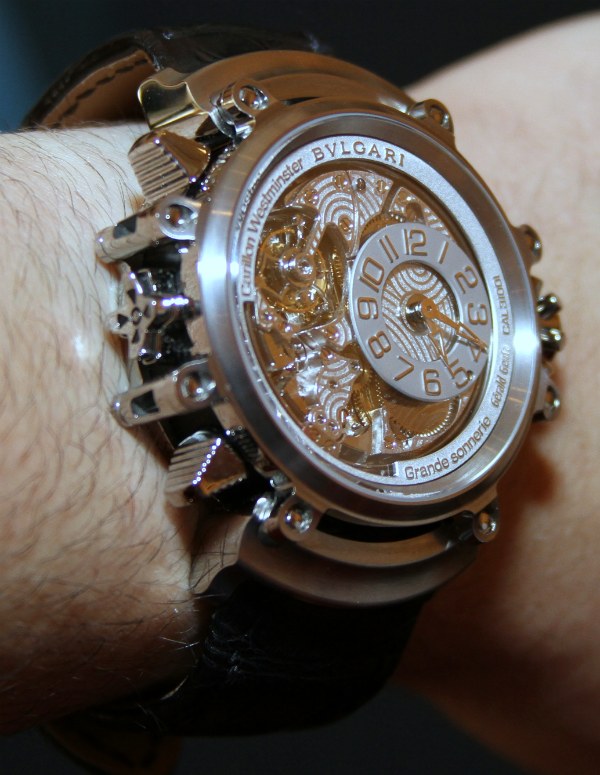 This piece of rare game goes for an awful lot of coin. It has an interesting history, as well, starting out as the Gerald Genta Arena Metasonic Sonnerie watch. When Bulgari engulfed the Gerald Genta brand (head nod to Genta who just passed away), they kept this piece and made a few style changes to the dial and case (very minor), the movement remained the same with the price still hovering around $1,000,000. Bulgari also changed the name of the watch from Metasonic to Magsonic and dropped the Arena part of the name.

Does Magsonic mean anything more than Metasonic? Magsonic is a new alloy that Gerald Genta created for optimal sound passage. Most of the case is actually titanium, though it is also offered in 18k rose gold. The Magsonic part of the watch is the black-looking part sandwiched between the bezel and caseback. The titanium (versus gold case) is probably a better idea if you are interested in the main feature set of this timepiece – the complex sonnerie complications – because gold will absorb more sound. It also has a tourbillon (seen from the dial), power reserve indicators (there are two as one is for the time and another is for chiming functions), and well, yes, the time. 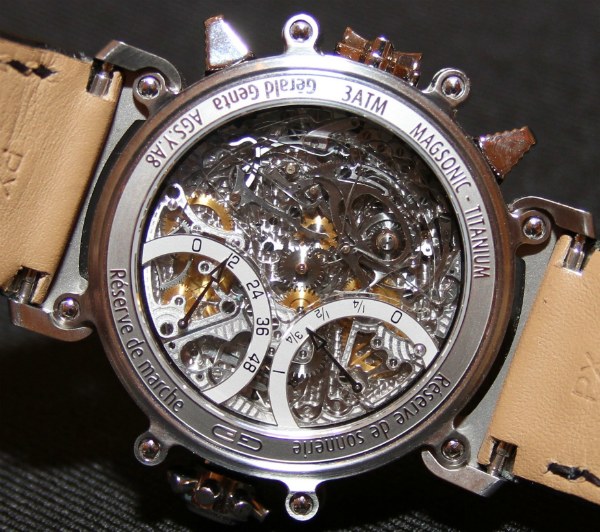 No wrist watch I have ever seen had more complex buttons and such all around the case. There is the wild-looking crown, a four-way rocker switch, switches that flip around, and maybe a bit more. It is all pretty nuts, but it is all there for a reason. The original designers of the movement had no intention of making it more complex than it needed to be – and tried to give the user as simple a time as is possible. Hungry to learn more about how it works? Bulgari even created a dedicated iPhone app just for the watch that you can check out here. 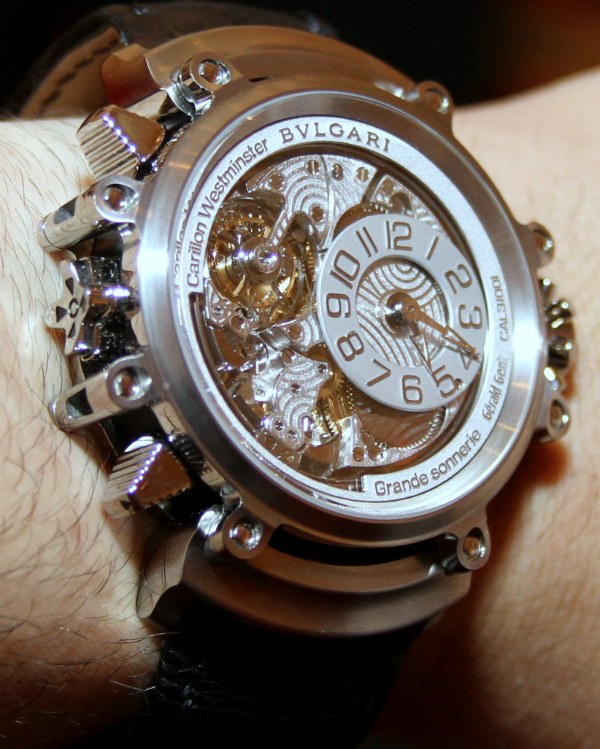 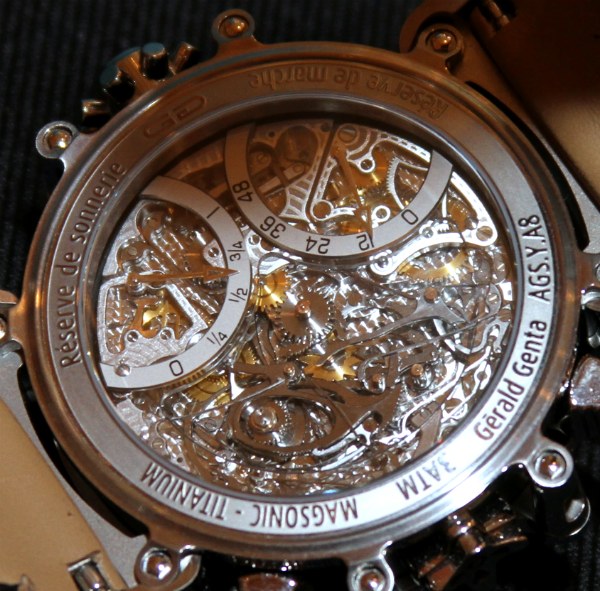 I would not call the movement so much beautiful as I would call it impressive. What it lacks in elegance, it makes up for in “wow.” With so much going on, and the almost avant grade design of it, elegance is pretty much thrown to the curb. That’s OK, though, as the concept is as artful as it is a feat of micro engineering.

As a sonnerie, the watch will sound out the time to you at certain intervals. It sounds them out like a minute repeater using a code of chimes created by several gongs and three hammers. This watch is the most complex sonnerie timepiece ever. You can see the hammers in action in the dial. The movement itself has something like 850 parts and is called the Caliber 31001. 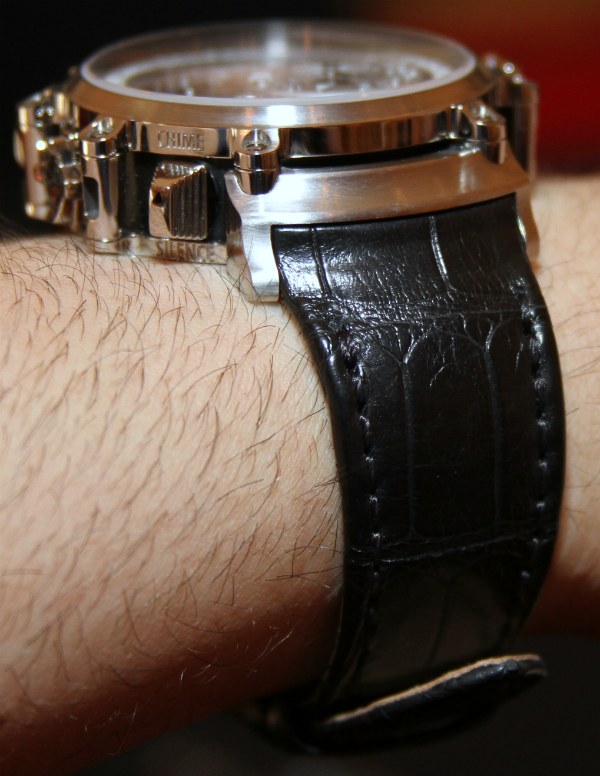 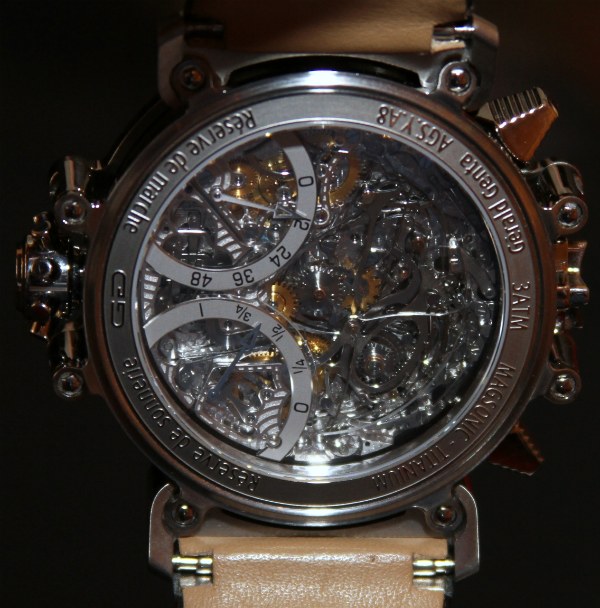 As I discussed in my earlier article on the Gerald Genta version, the watch was created to have optimal sound – it was pretty impressive, I have to say – but for that you want to stick with the titanium model. The case is large, but not insanely so, at 46mm wide (wider with the crown and such).

Listening to the sonnerie is as fun as it is to watch it work. The chimes are complex as the hammers work in unison. Though they seem quite fast for anyone trying to decipher them to calculate the time. Perhaps you might see one of these in your lifetime, but I imagine if you aren’t in the industry that might be hard. Seeing this watch was a rare treat and I think it is pretty cool. Price is around $950,000.