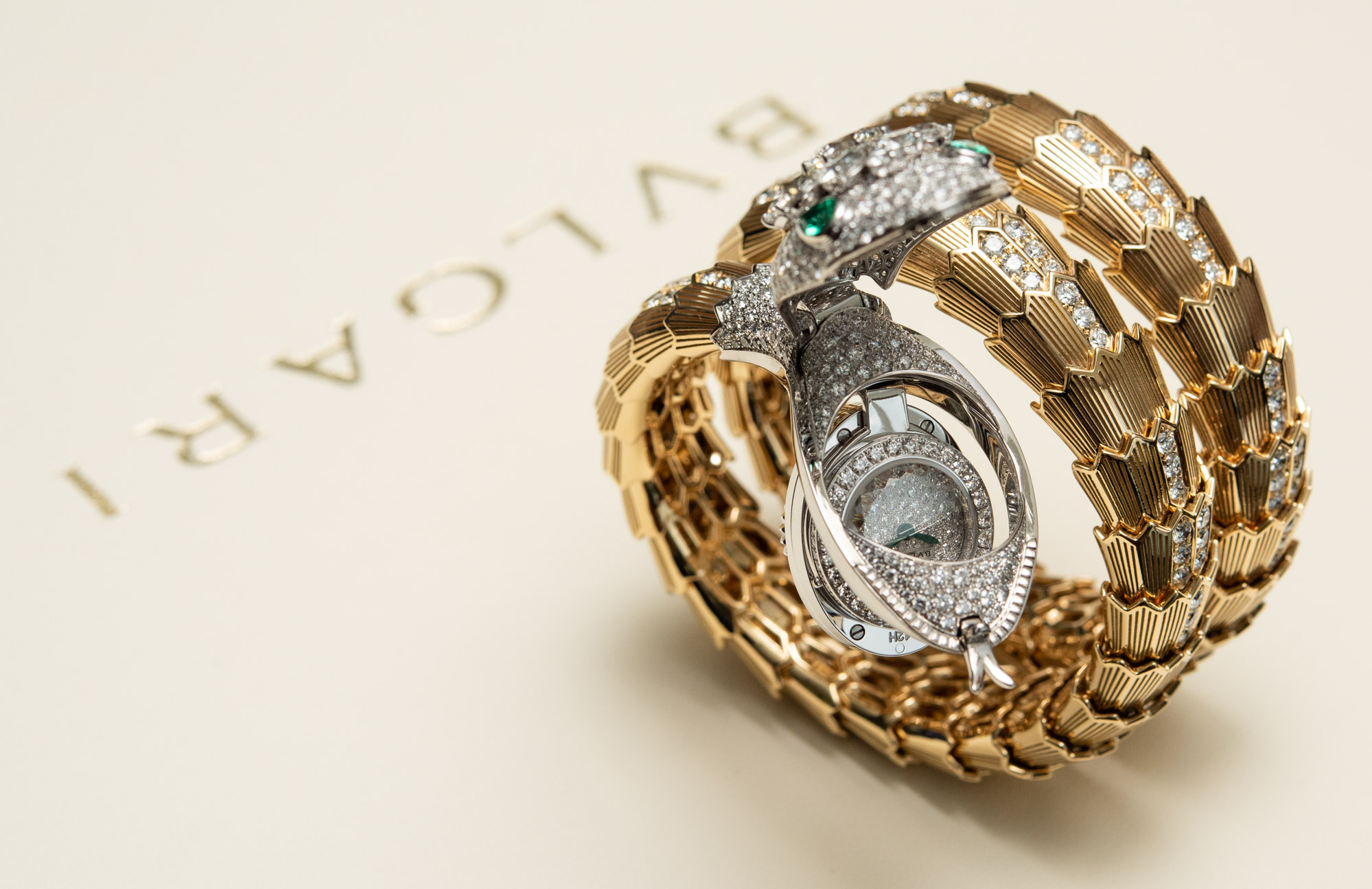 Bulgari created something unquestionably outstanding with the first Serpenti back in the 1940s. Inspired by the symbolism of the seductive serpent in ancient Greek and Roman mythology, the Serpenti took on the form of one of the most feminine and captivating women’s watches. Worn by actresses and the most privileged jet-set, what renders today’s Bulgari, and today’s Bulgari Serpenti creations, so special, in my eyes at least, is that the company and its craftspeople are still able to push the serpent theme, its hand-assembled tubogas construction, haute joaillerie execution, and the inimitably over-the-top nature of the collection right to the edge. Browse the images below and hopefully, you’ll get to understand why I could wax poetic over the Bulgari Serpenti Misteriosi luxury women’s watch all day and night. 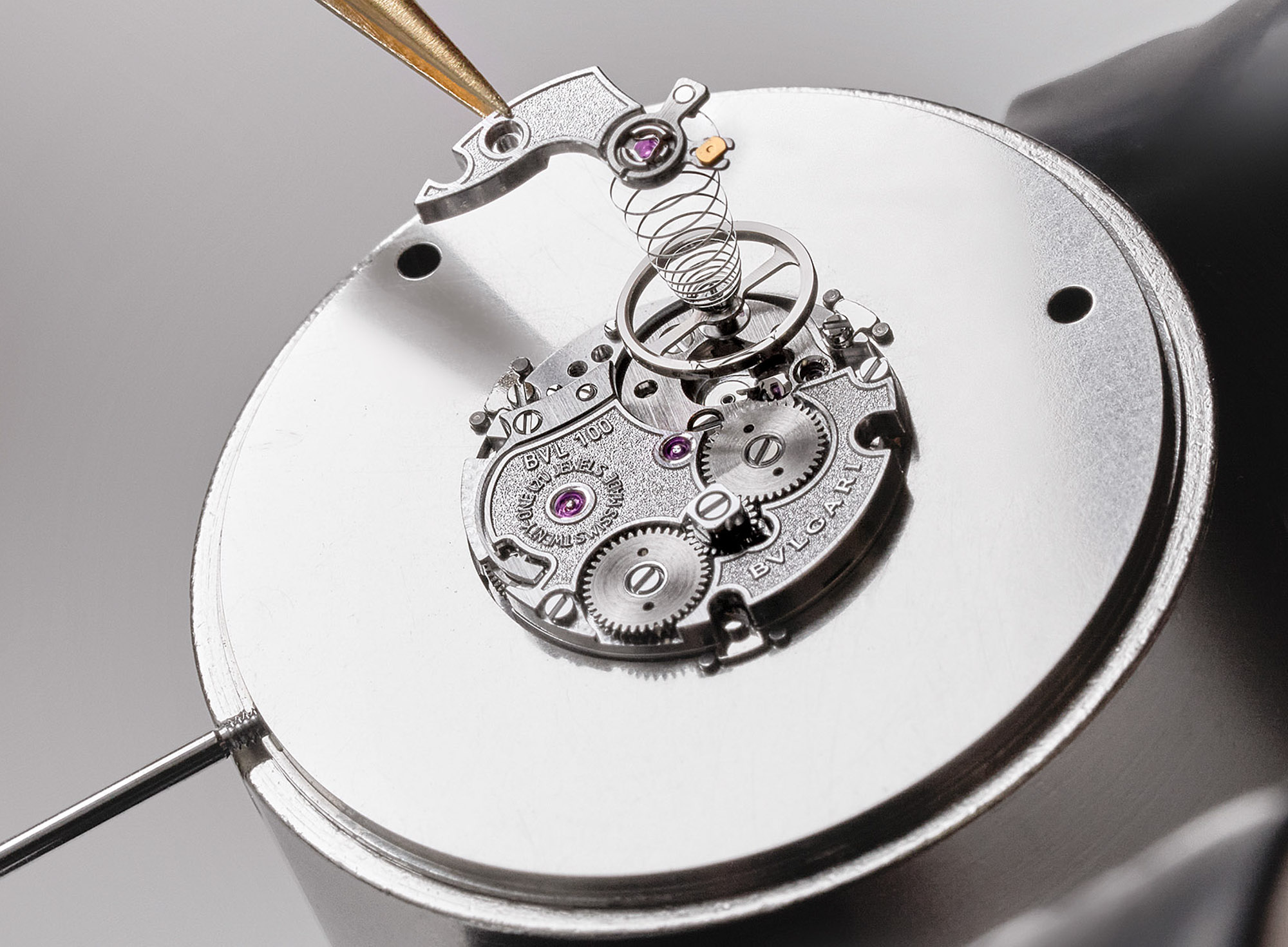 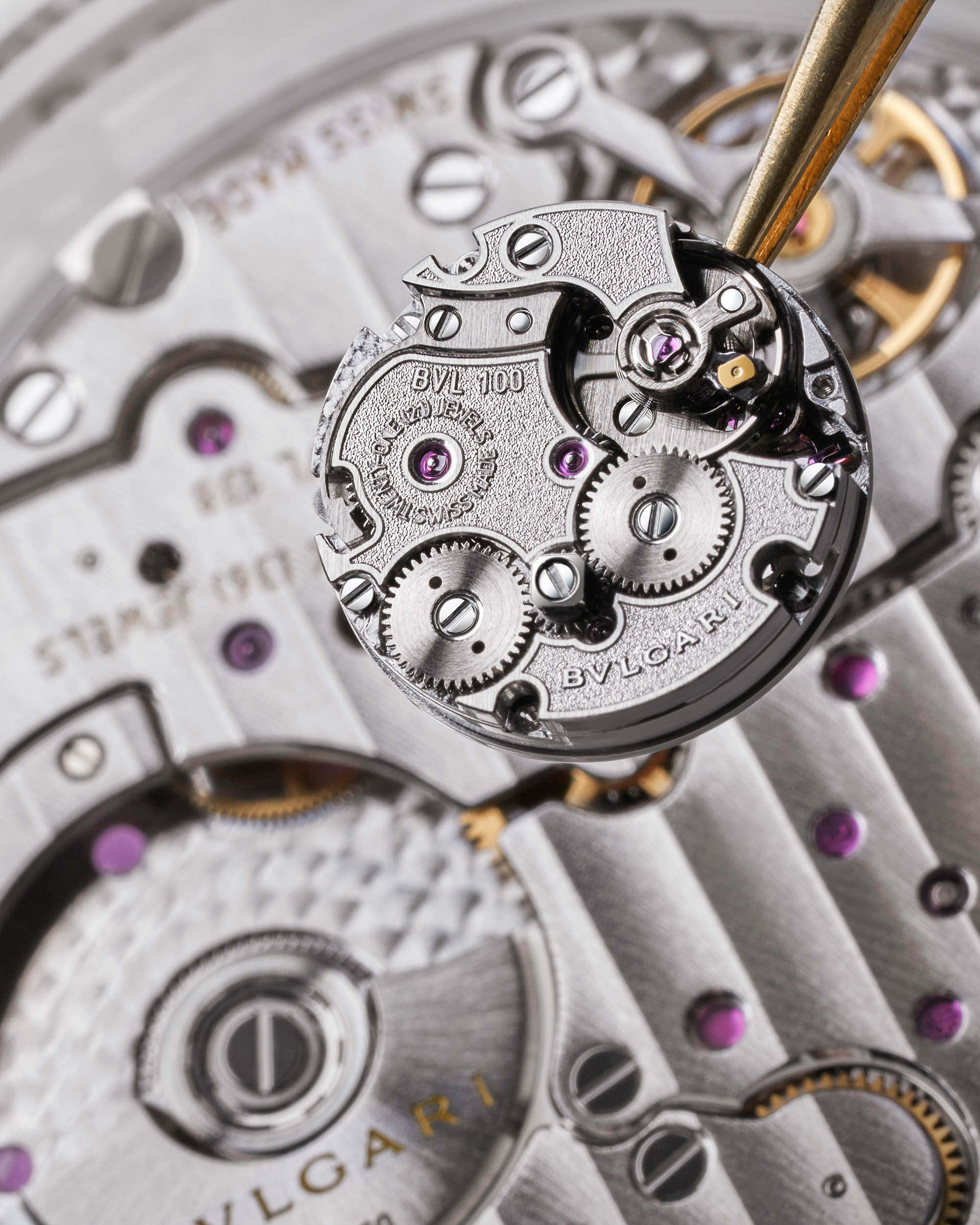 The BVL 138 in the background, from the Octo Finissimo, is exactly three times wider than the 12.00mm BVL 100.

First, let’s talk watchmaking. Bulgari is proud and, frankly, excited to have developed its own hand-wound, extra-small mechanical movement to be fitted to some of the Serpenti and later on, perhaps other women’s watch references in place of quartz movements. It’s officially called piccolissimo, meaning smallest in Italian.

It is no surprise that Bulgari utilized some of what it’s learned when developing its record-thin Finissimo movements. With the BVL 100’s average component weight of 0.012 grams, manufacturing, assembling, and reliably operating a caliber of such proportions is no small technical feat. 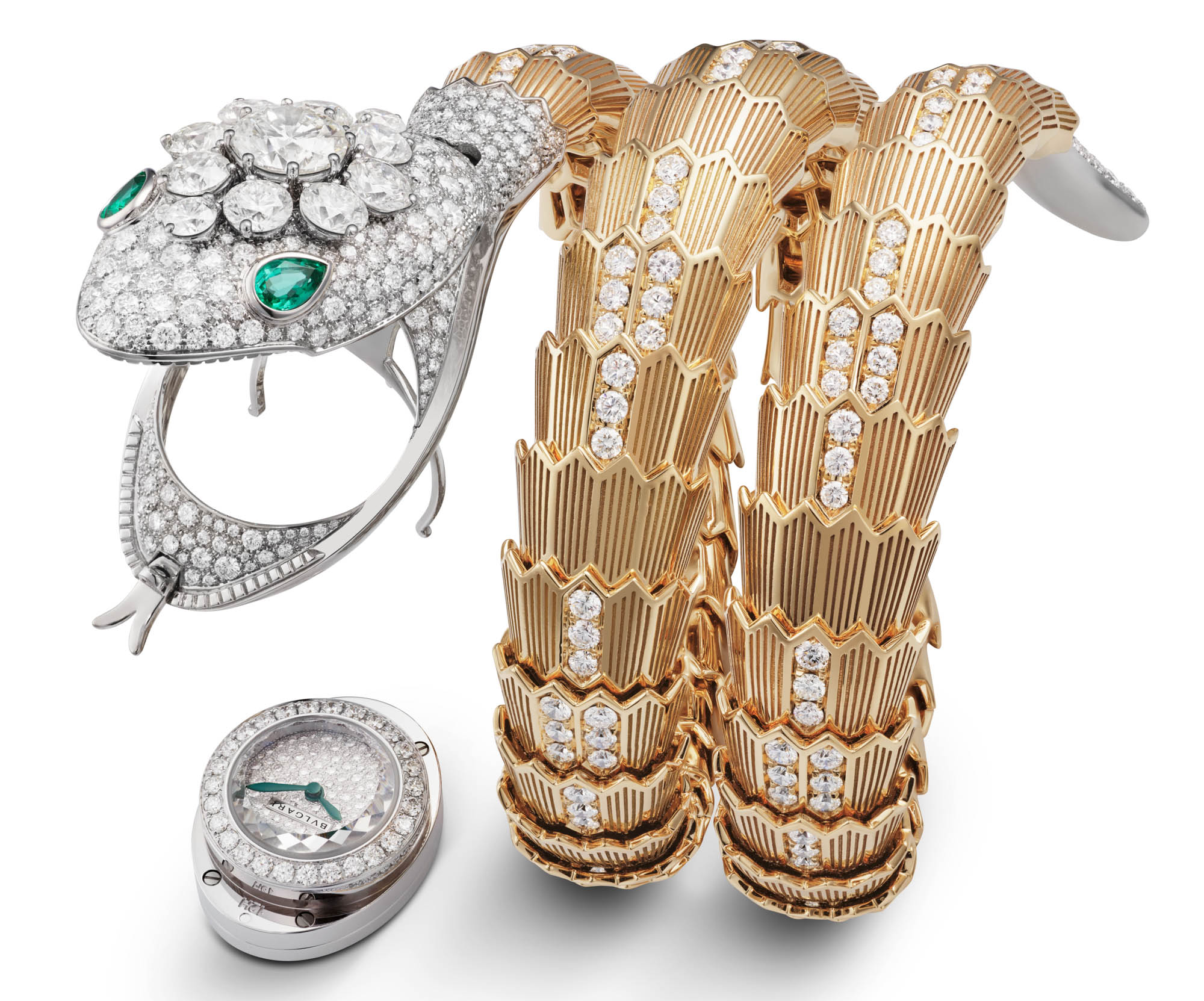 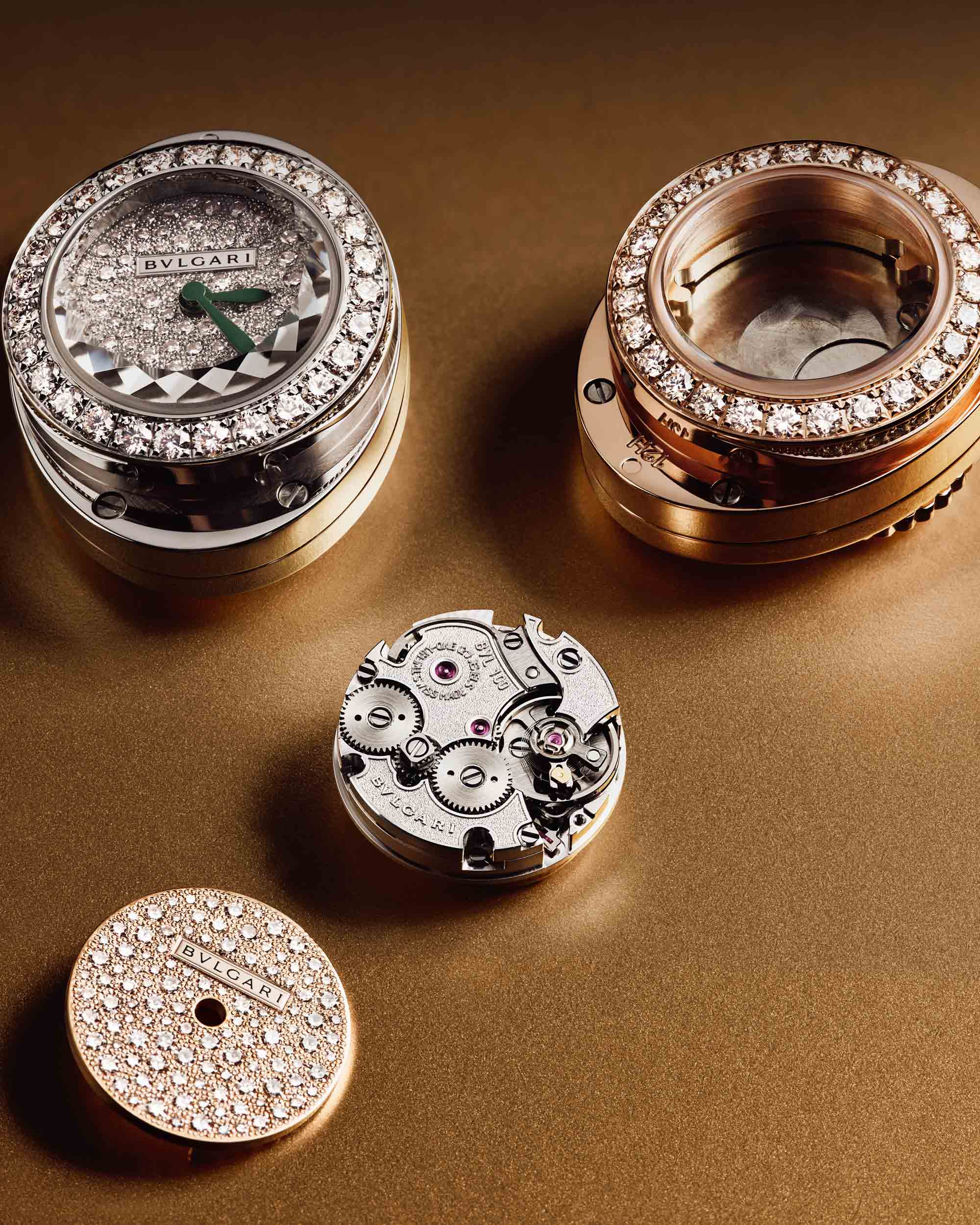 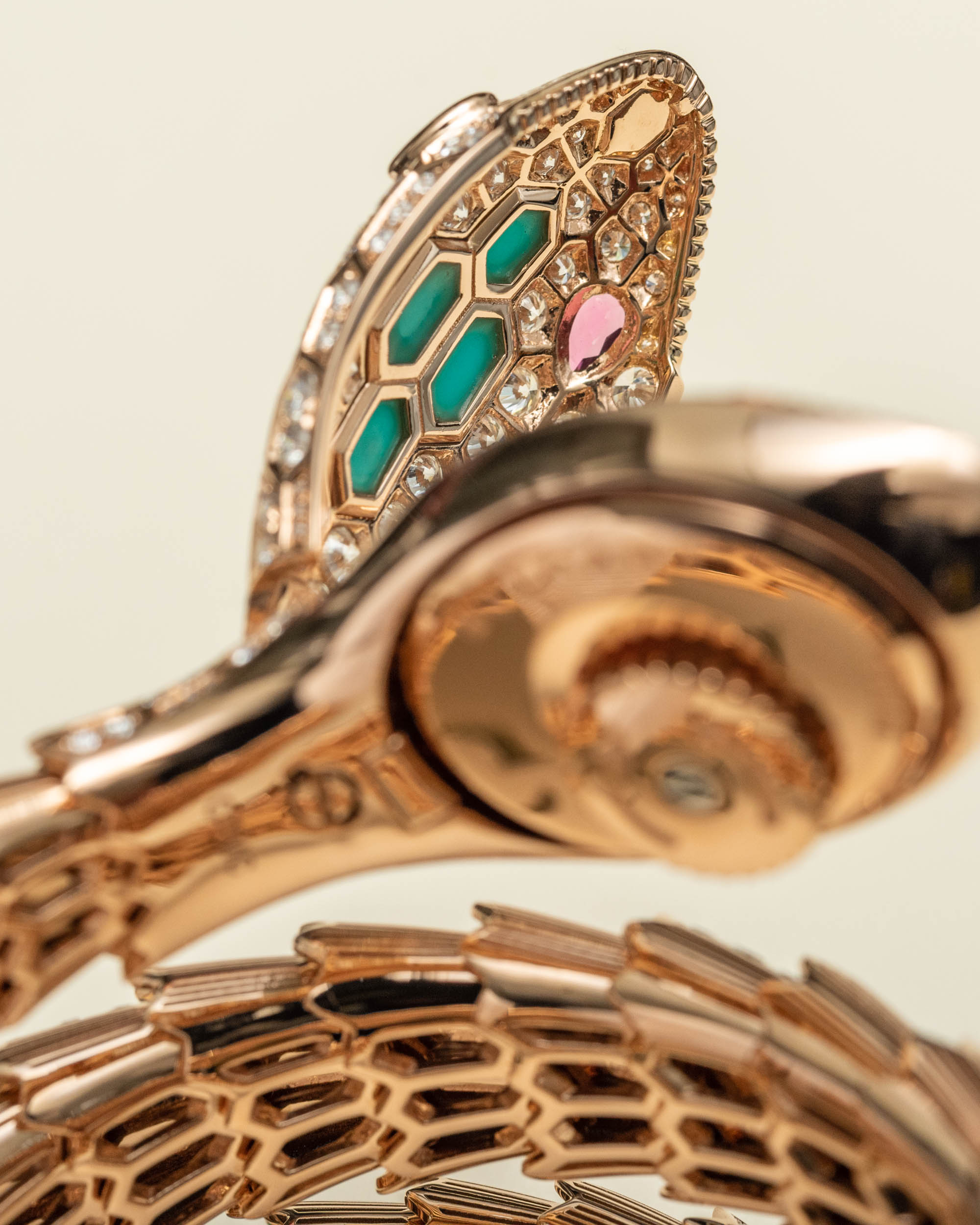 The BVL 100 is engineered with its crown on the back to wind and set the Serpenti Misteriosi.

This leads us to the Serpenti Misteriosi itself, arguably the most spectacular, most complicated, and most expensive among Serpenti women’s watches. A few weeks ago, at the brand’s Swiss watchmaking headquarters in Neuchâtel, we were in the right place at the right time to see two of the new pieces fresh out of the oven – they arrived just minutes after us, having freshly departed the hands of their fabricators. 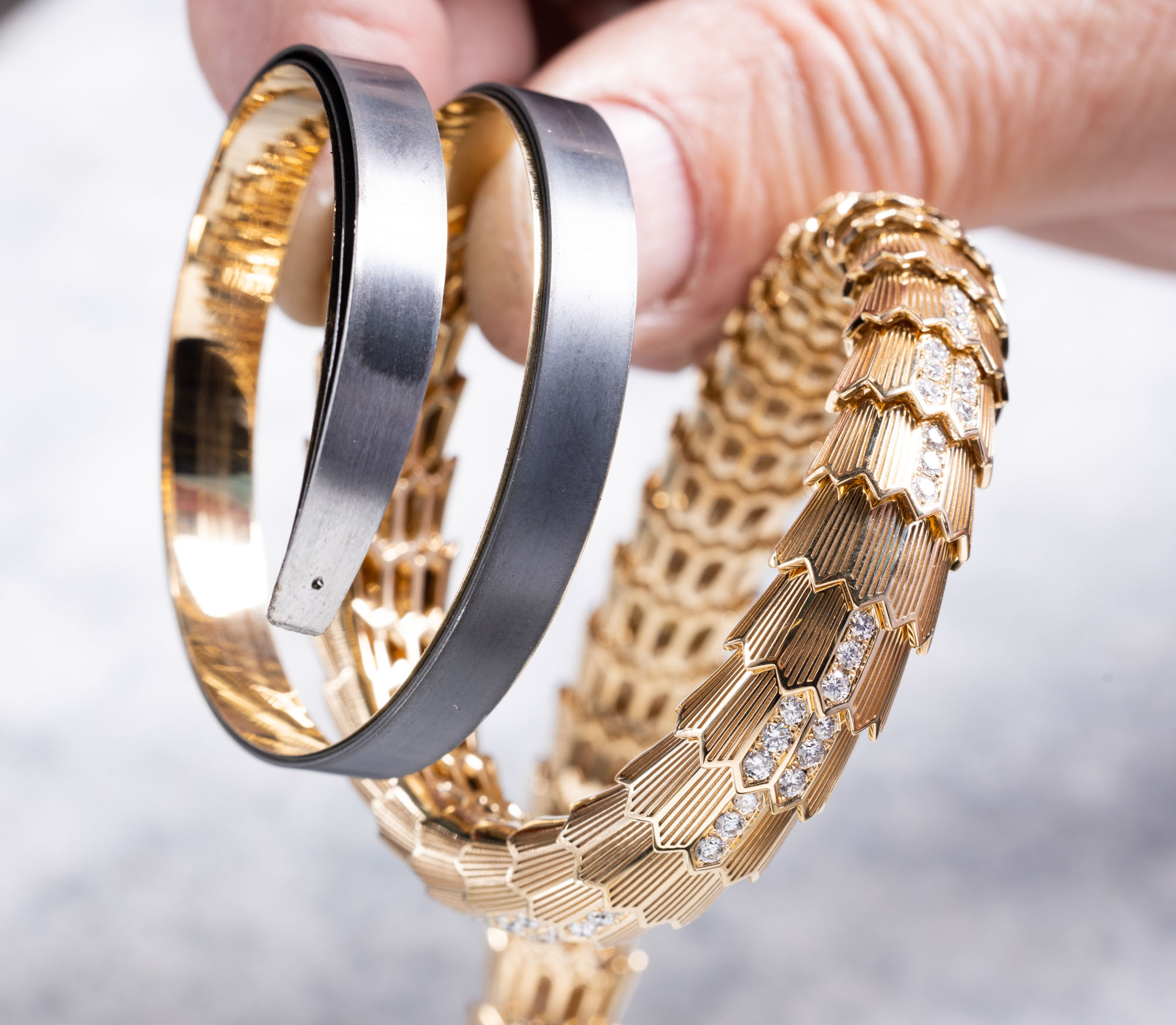 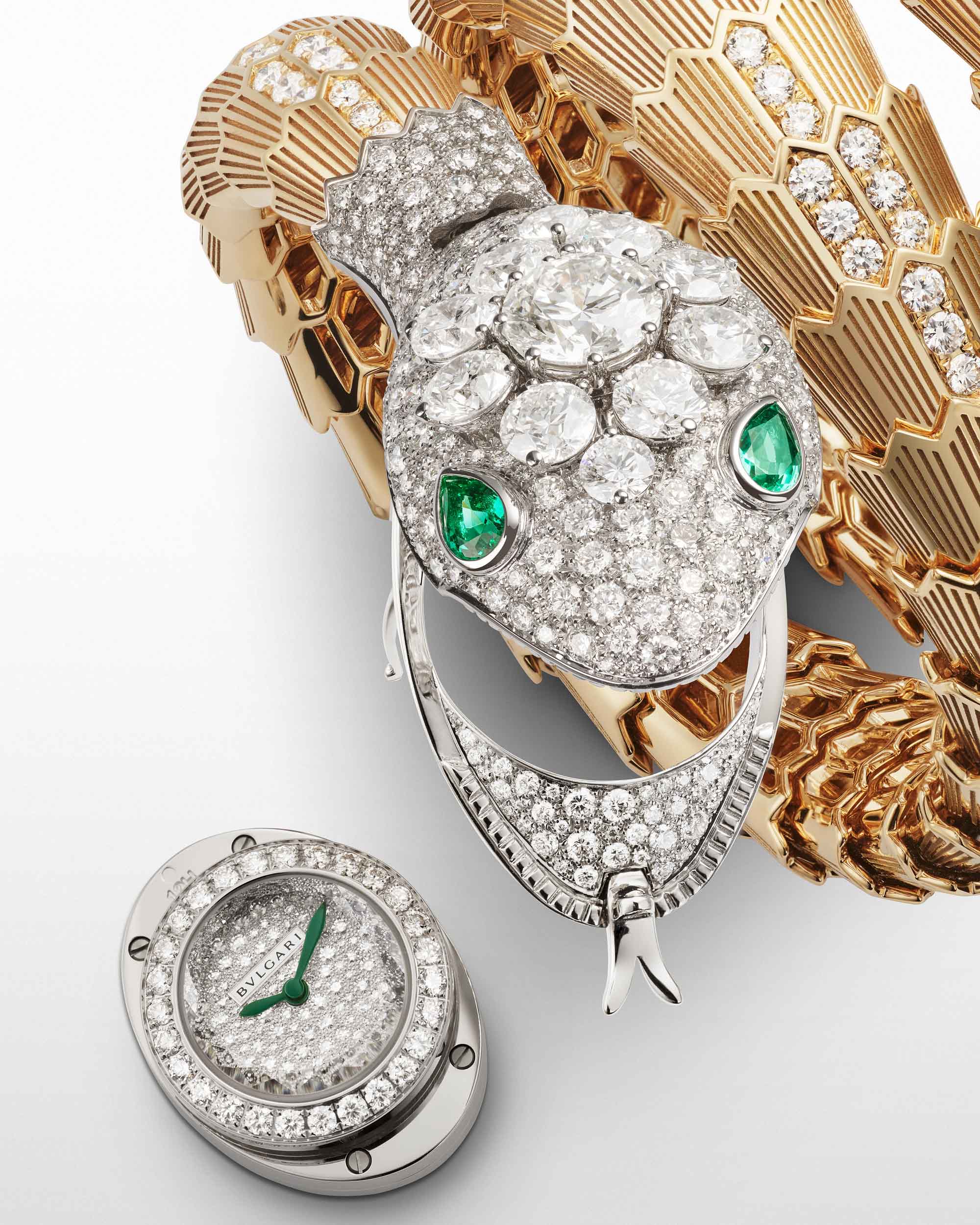 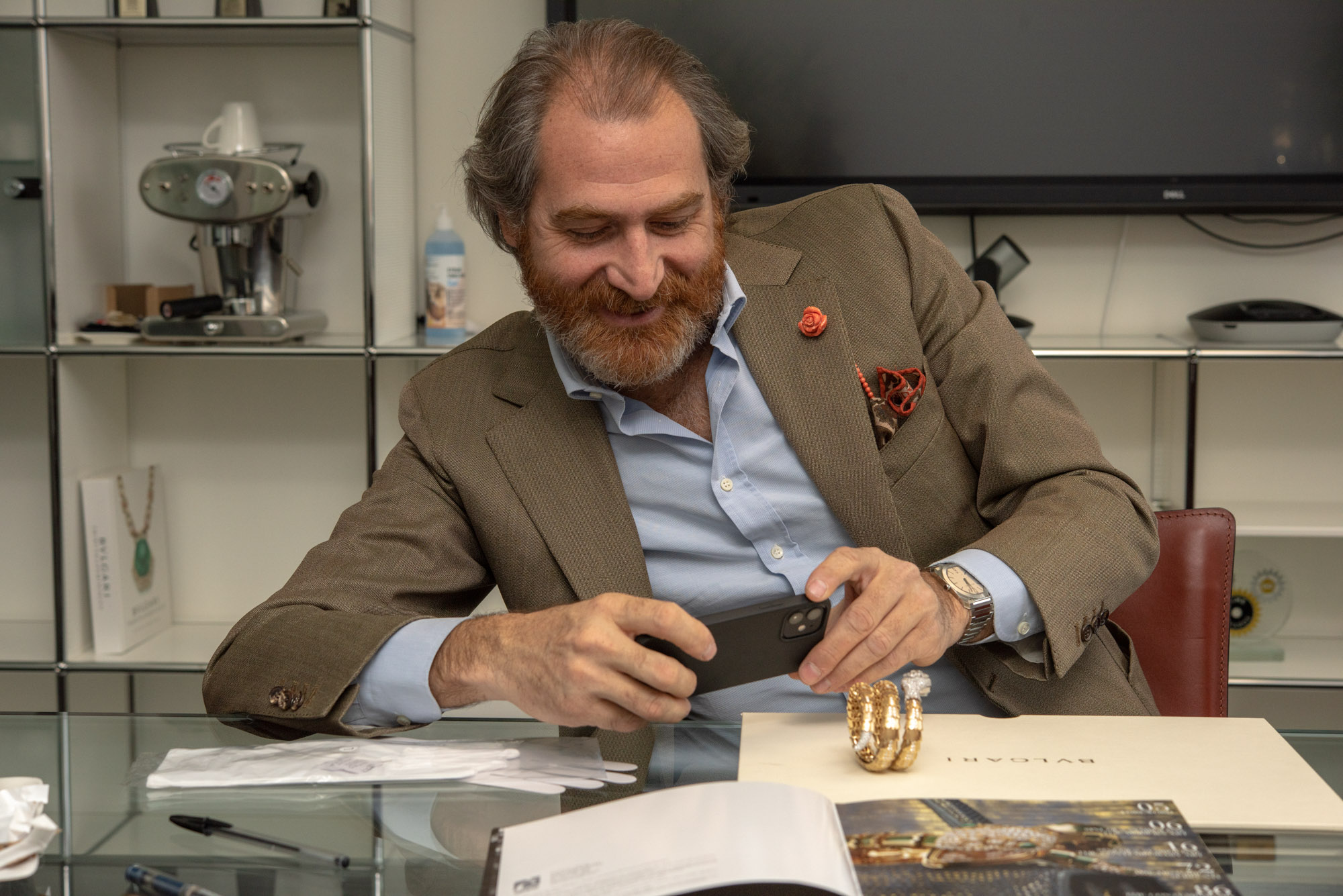 So fresh, in fact, that Fabrizio Buonamassa, creative director of the brand, had to drop by to see them in the metal for the very first time, snapping photos right alongside us. Come to think of it, in my nine years with aBlogtoWatch, there might have been just a handful of times when I could witness a creator see their creation for the first time, materializing right in front of their eyes. Beyond the ridiculously complex, vault-like entry procedure of the Bulgari HQ, such special moments await. 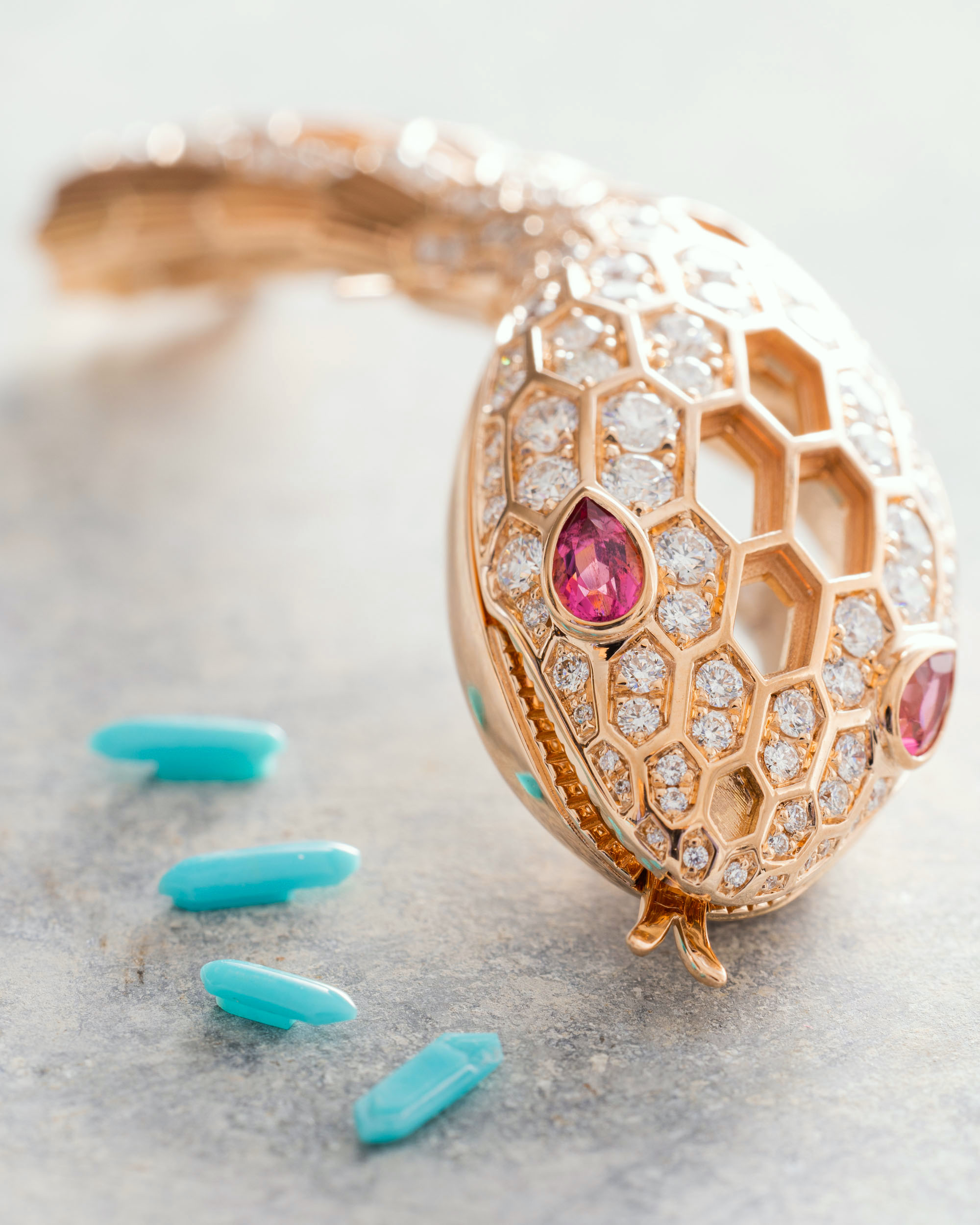 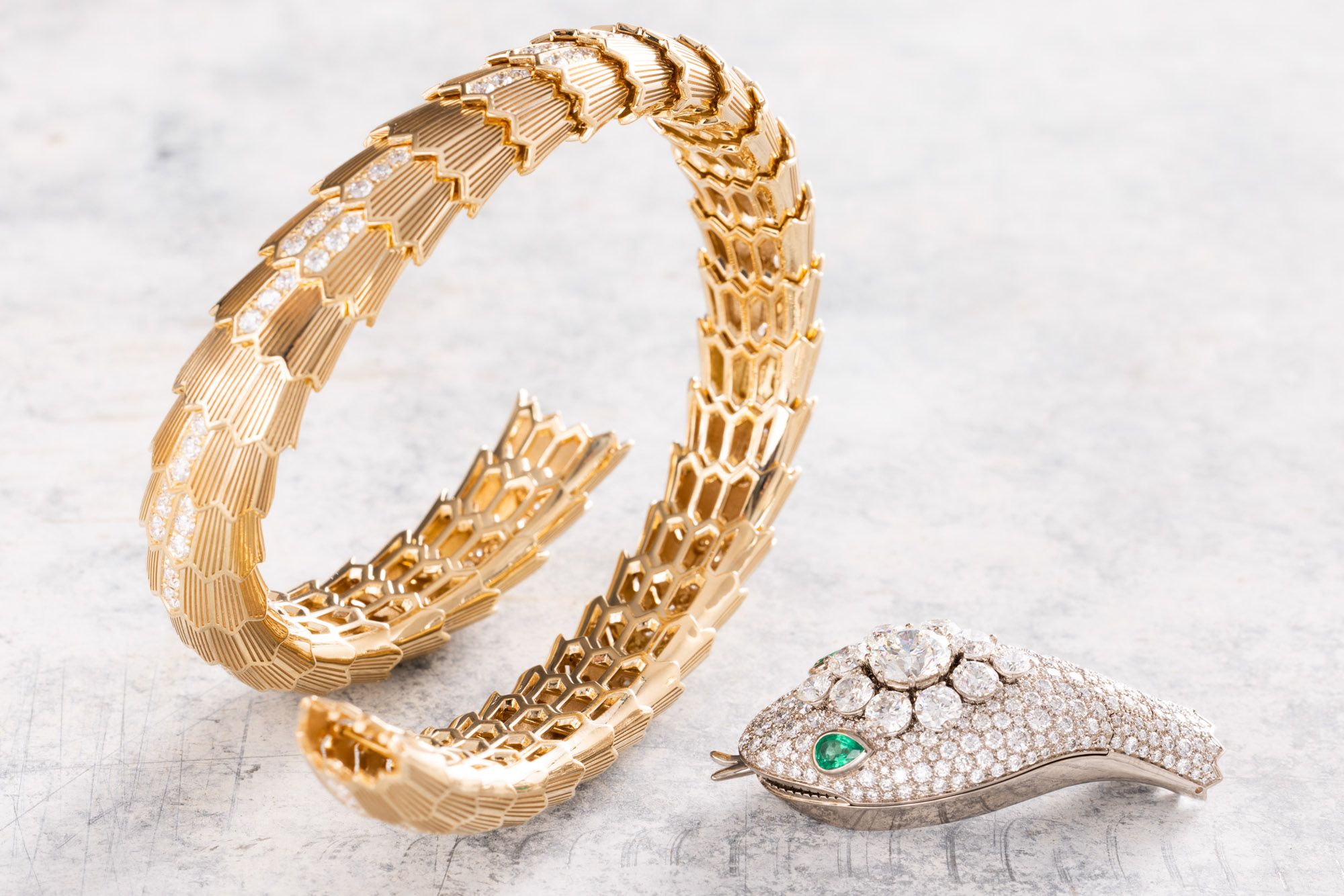 On paper, all four of the new-for-2022 Serpenti Misteriosi pieces are apparently distinguished only by their reference numbers – the two pieces featured in this article are reference 103558 and reference 103561. Perhaps it wouldn’t be a stretch to say each is worthy of its own serpentine nickname. 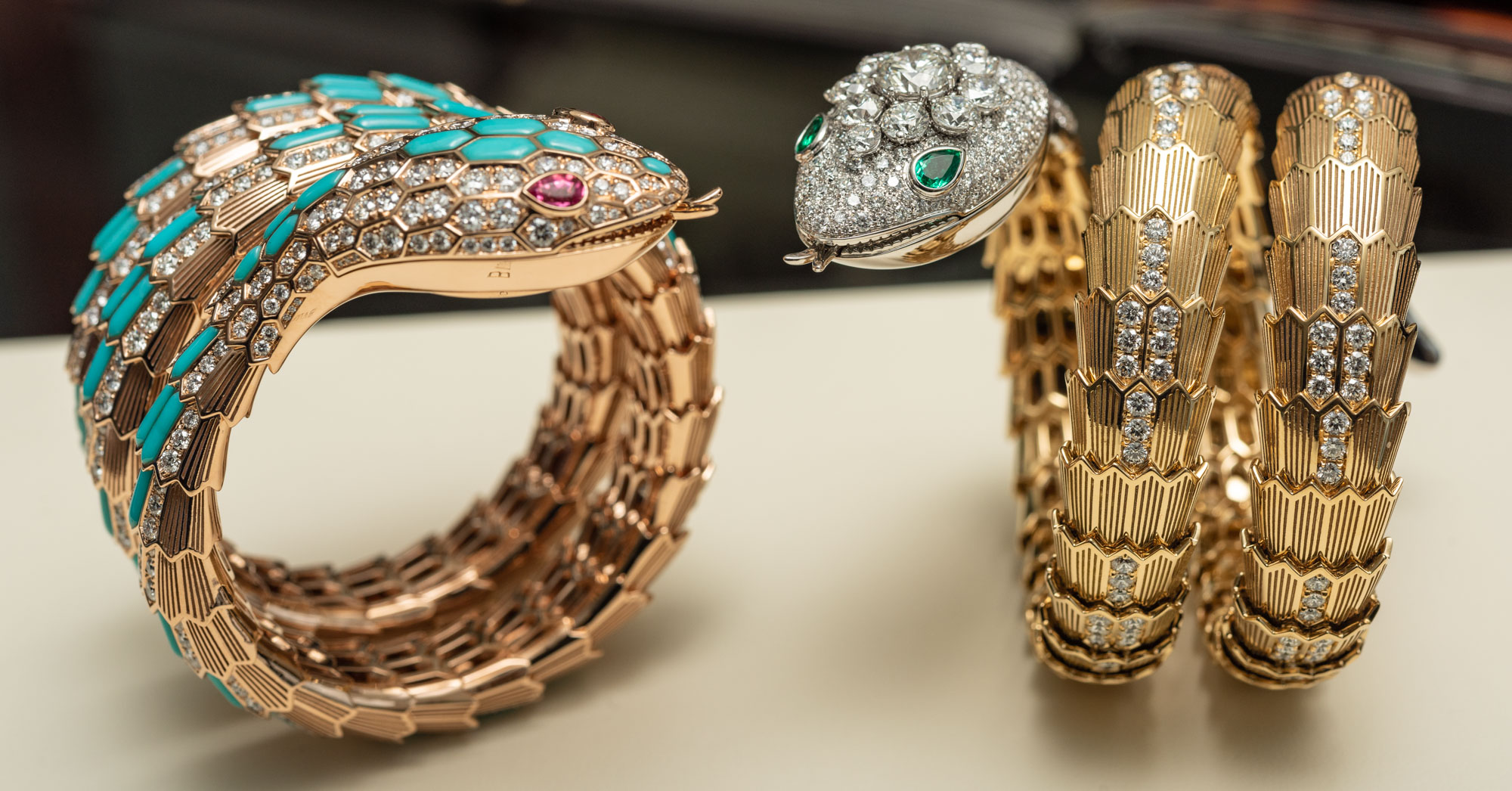 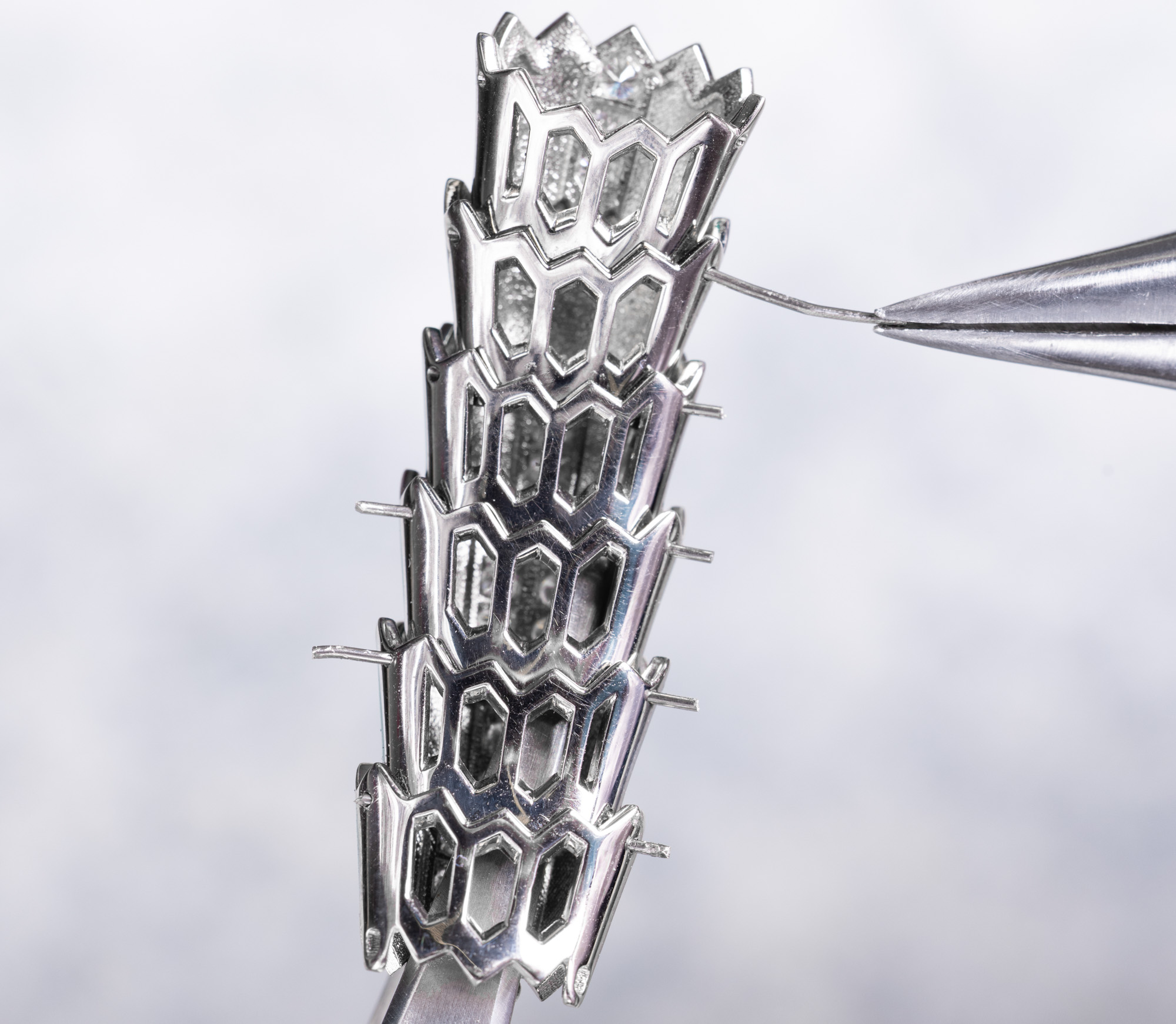 Rooted in numerous ancient cultures, the snake embodies multiple symbolic values, including womanhood, rebirth, luck, seduction, and temptation. It is only right, then, that the Serpenti watch winds and wraps around the wrist like a true snake. To do so, these ultra-high-end Serpenti watches use an elaborate version of the Tubogas bracelet construction that made the collection famous in the mid-1900s. The so-called “double-tour” tubogas bracelets here feature a precious metal structure of links wrapped around a flexible blade. 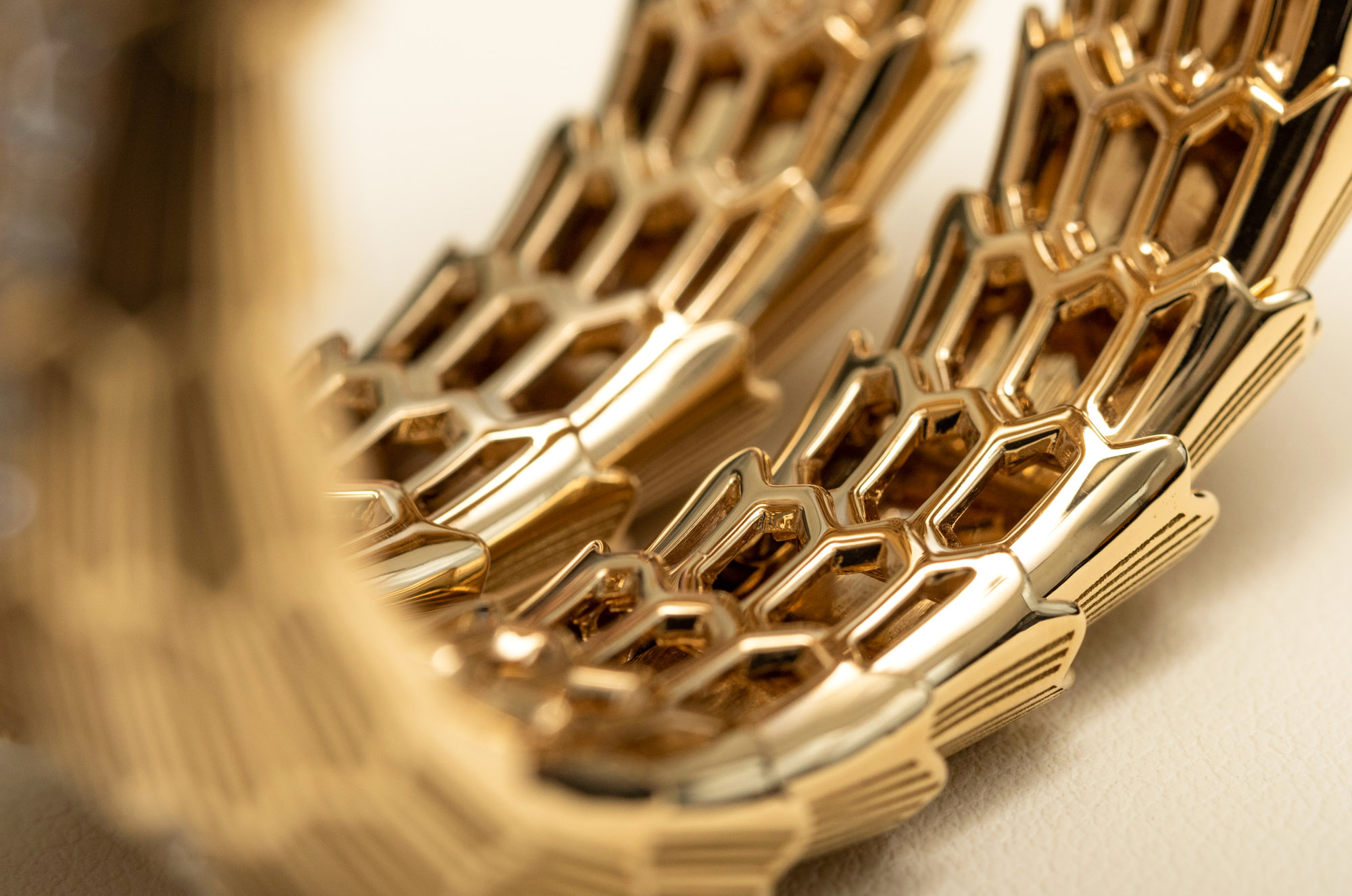 This image just above shows the hollowed-out structure of the individual links – the 18k gold latticework ensures that the links are soft to touch and weight (which is still substantial for the fully assembled watch) is kept at bay. It is remarkable that even the inside, or flipside, of these individual links is brought to such refinement and polish by hand – this makes one wonder which men’s watch, even at this $200,000 range, offered a bracelet that came even remotely close. 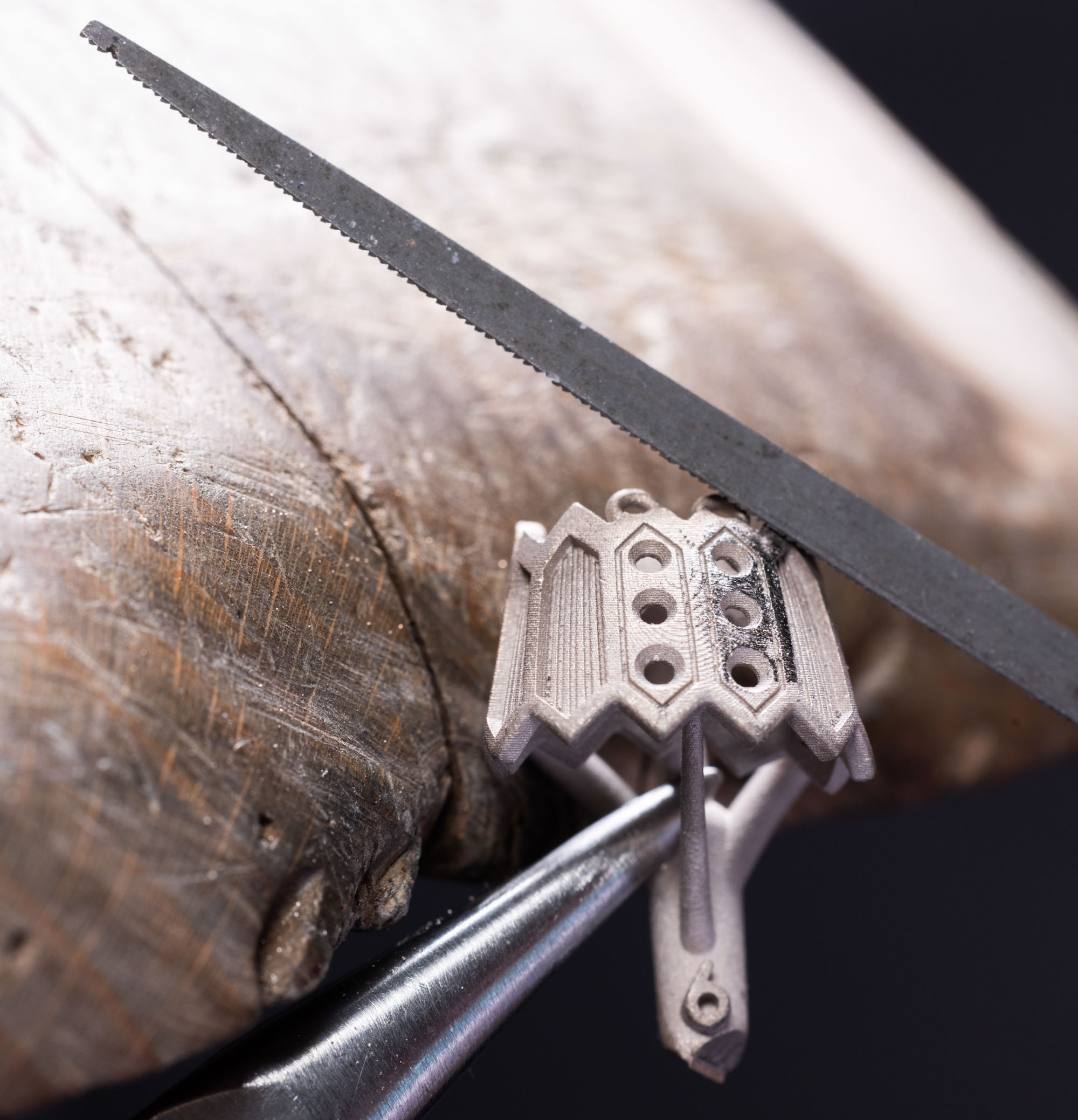 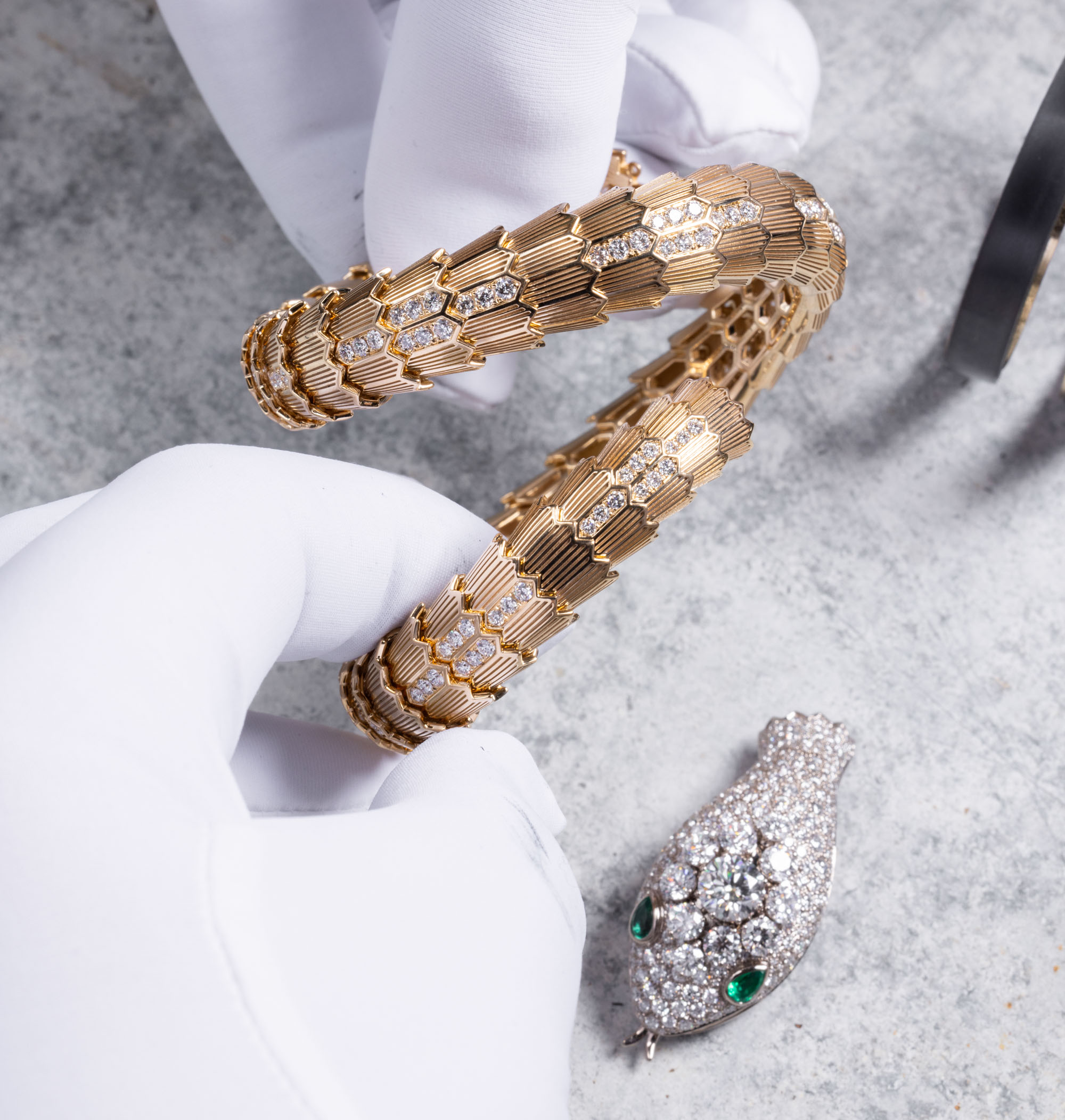 The crazy thing is that what looks like an impossibly delicate object actually is a shockingly robust one. When you pick one of these Serpenti watches up, the first thing that strikes you – beyond some 700 diamonds and tens of thousands of facets reflecting light into your retinas – is the weight: there is a lot of it. More to the point, it is distributed within a large object: Where a really heavy men’s watch, say, a platinum Day-Date 40, feels like a relatively small, heavy orb, the Serpenti Misteriosi is about 3/4 the size of a fist. It would work perfectly well as a coffee table ornament inside a villa somewhere in Tuscany – which is where at least some of these will probably end up. 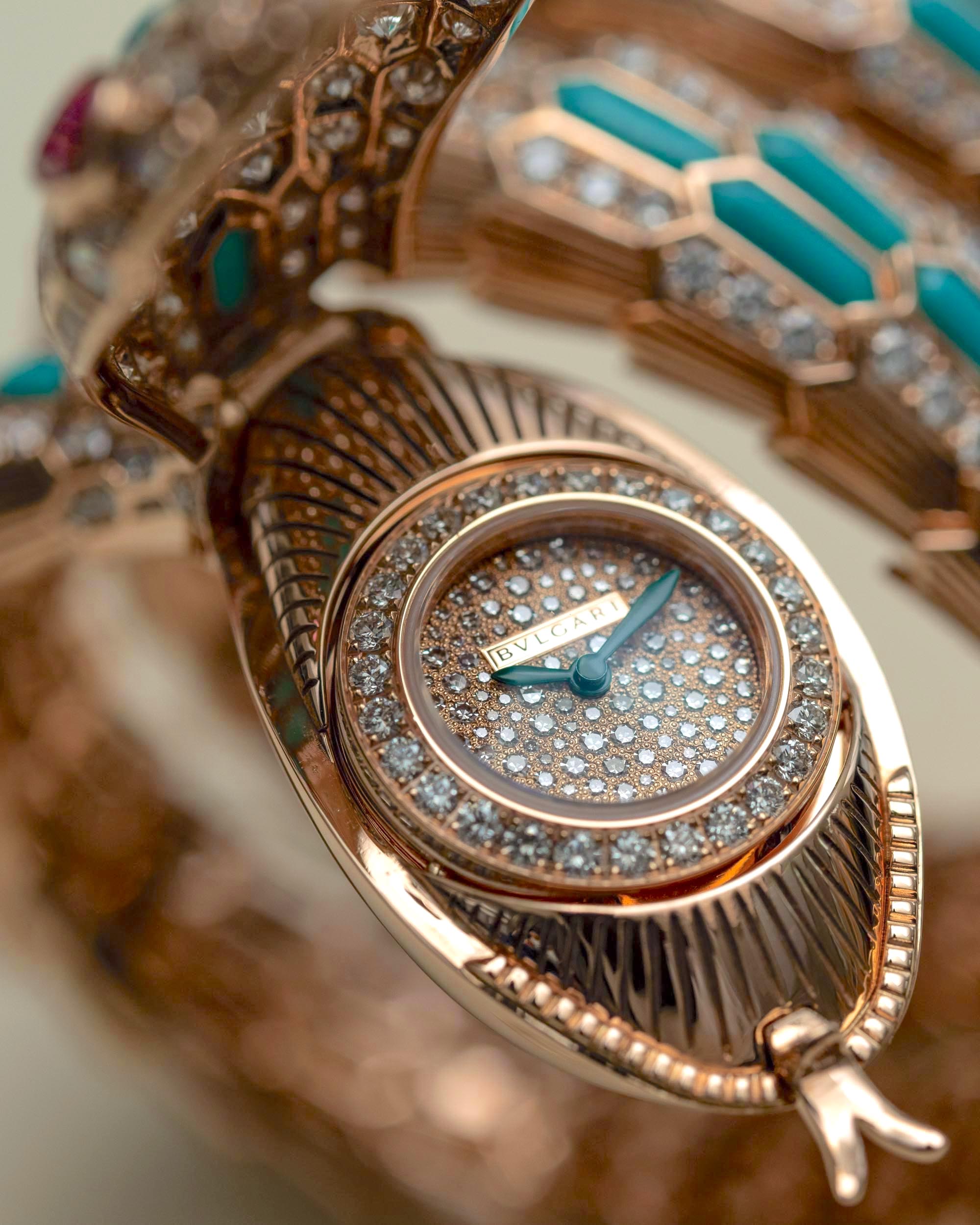 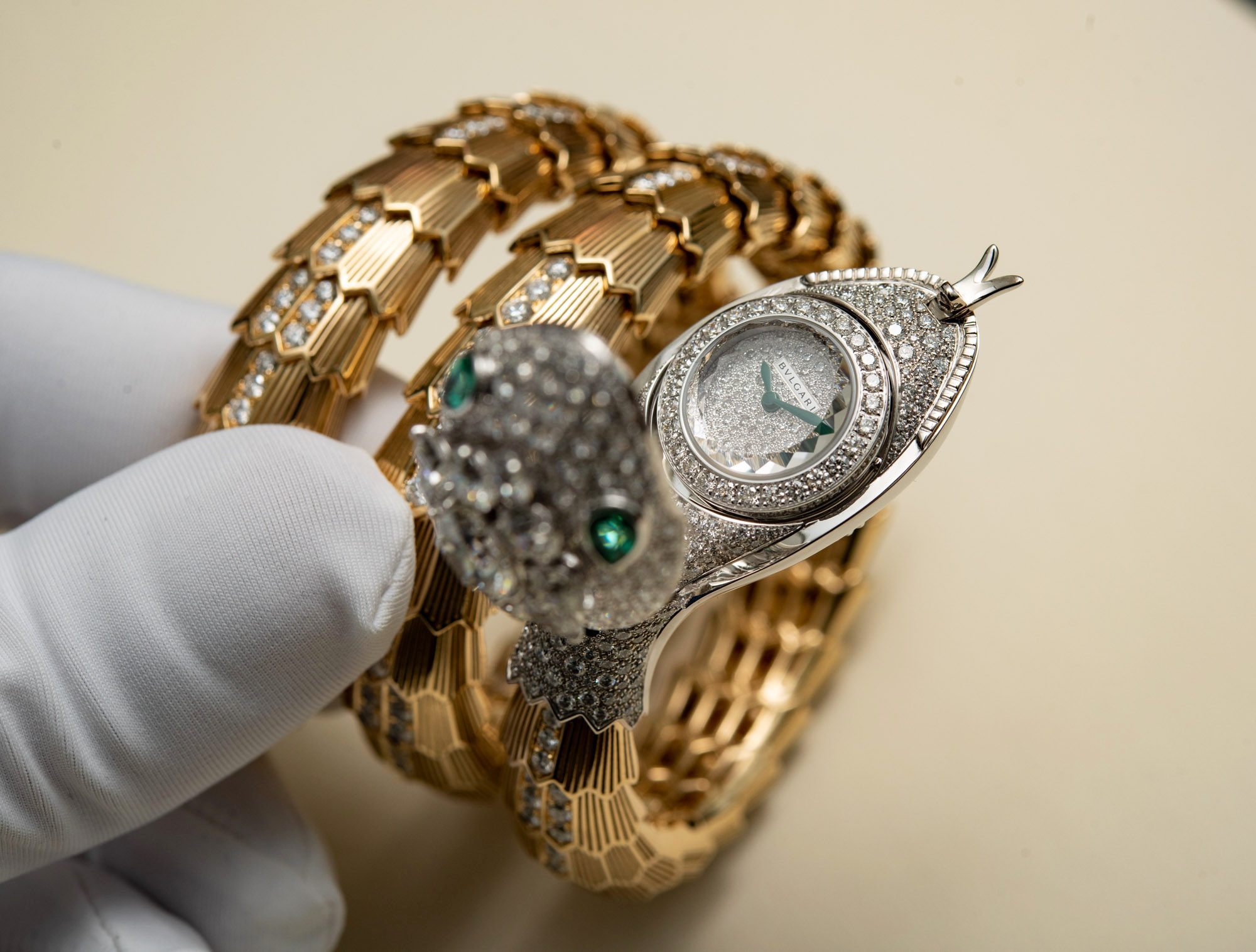 The second thing is the way this watch wants to come alive and move on its own: picking it up and handling is impossible without inducing some sort of movement from it. Then curiosity might just take the best of the observer, as one begins to pull the thing apart: And apart the Serpenti and its tubogas bracelet stretches. You couldn’t pull it out into a straight line, but it stretches way beyond the point that would be necessary for putting it on with comfort. In short, Bulgari has perfected the tubogas technique and crafted the Serpenti into a watch that is truly and deeply impressive in its engineering and robustness. And that is not something many would expect when judging from photos or picturing the delicate scenarios in which such a piece will be worn. 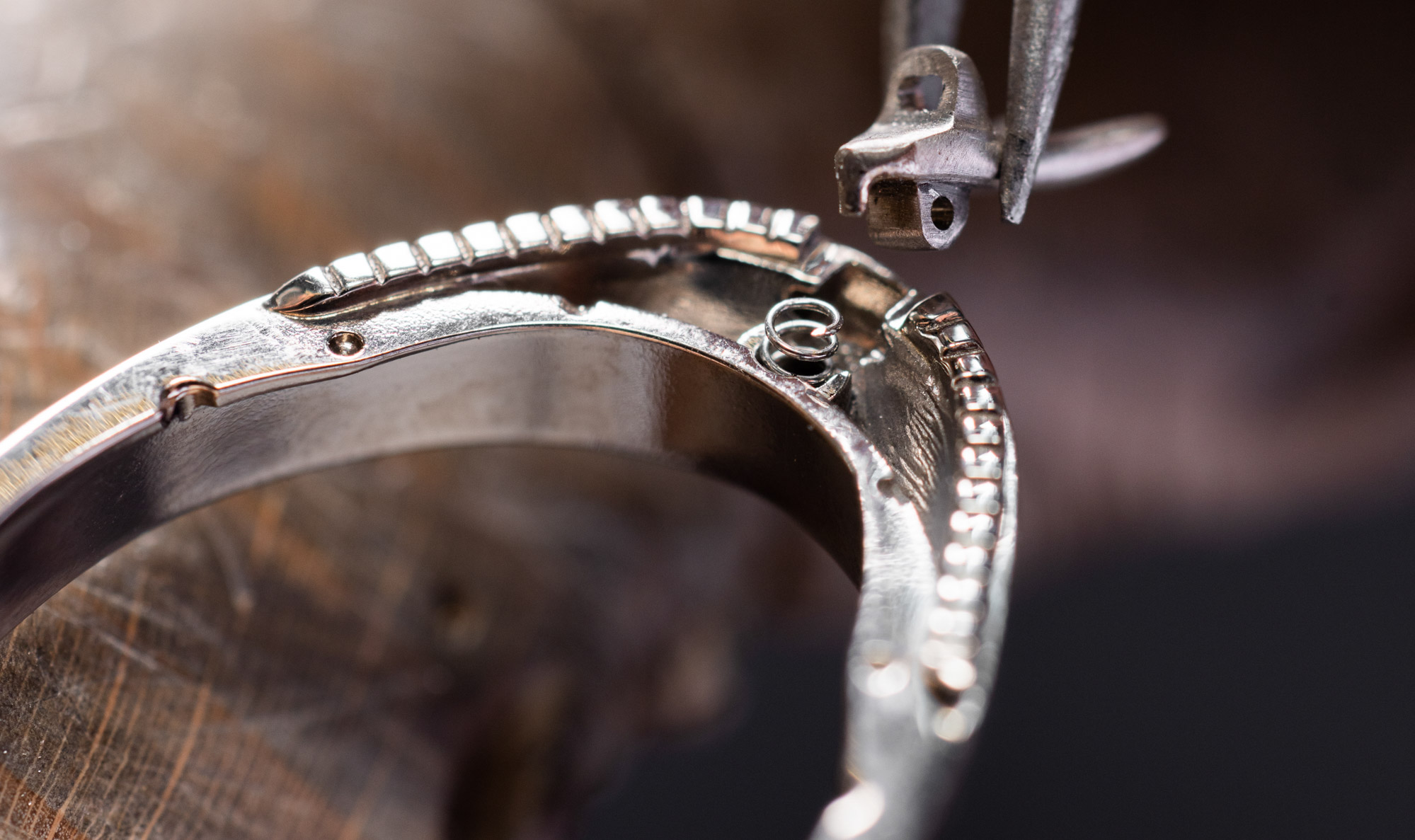 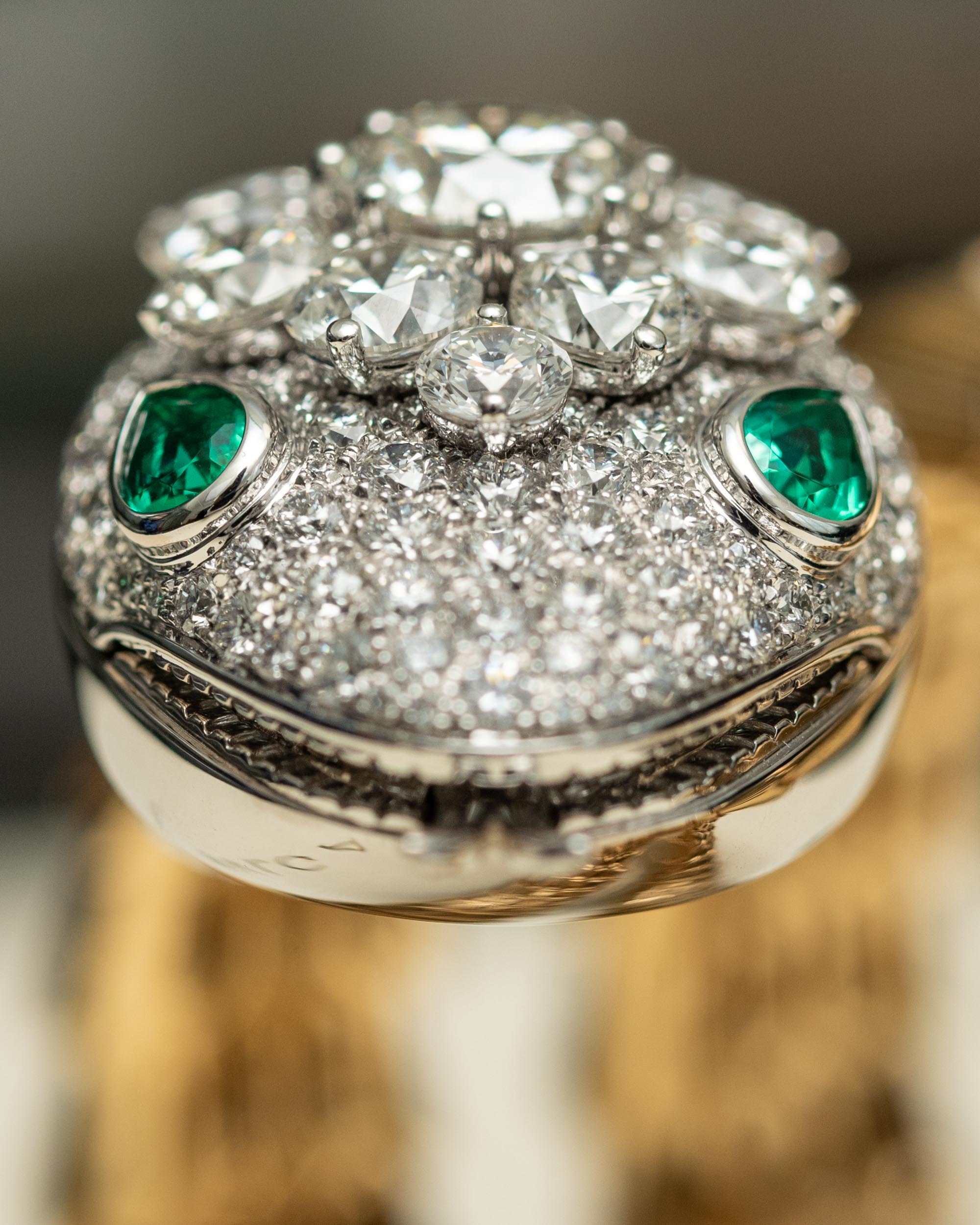 A gentle press down the tongue and the head of the serpent opens – but first, one might want to appreciate the sinister teeth that run along the mouth, in line with some ancient and not-so-ancient depictions of the serpent. In fact, the entire head and its teeth bear remarkable similarity to those on Lorenzo Maitani’s early 1300s relief on the facade of Orvieto Cathedral. The top gently hinges away and reveals pave-set dials and, on one of the models, a faceted sapphire crystal that is a lovely match to the myriads of diamonds around it. 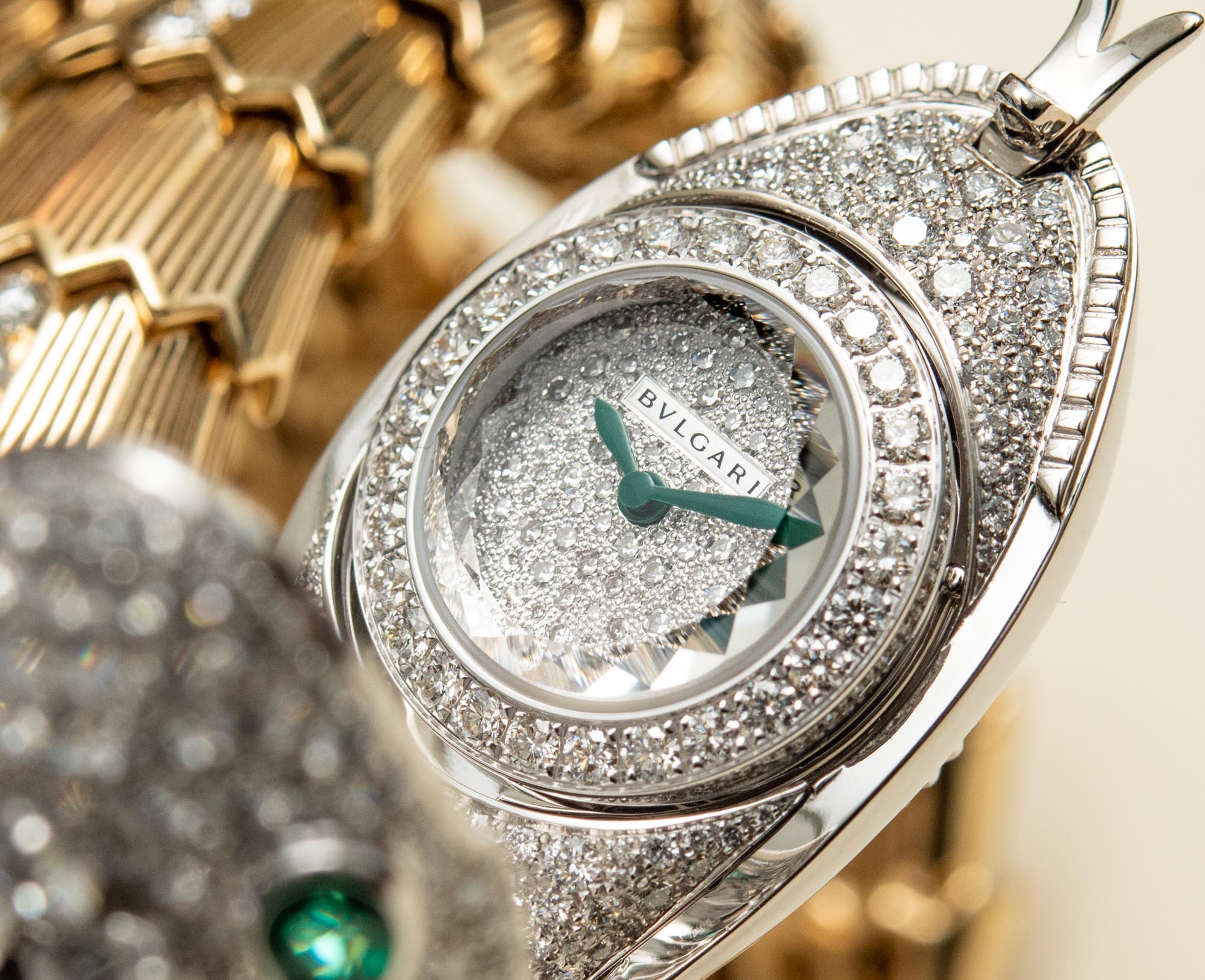 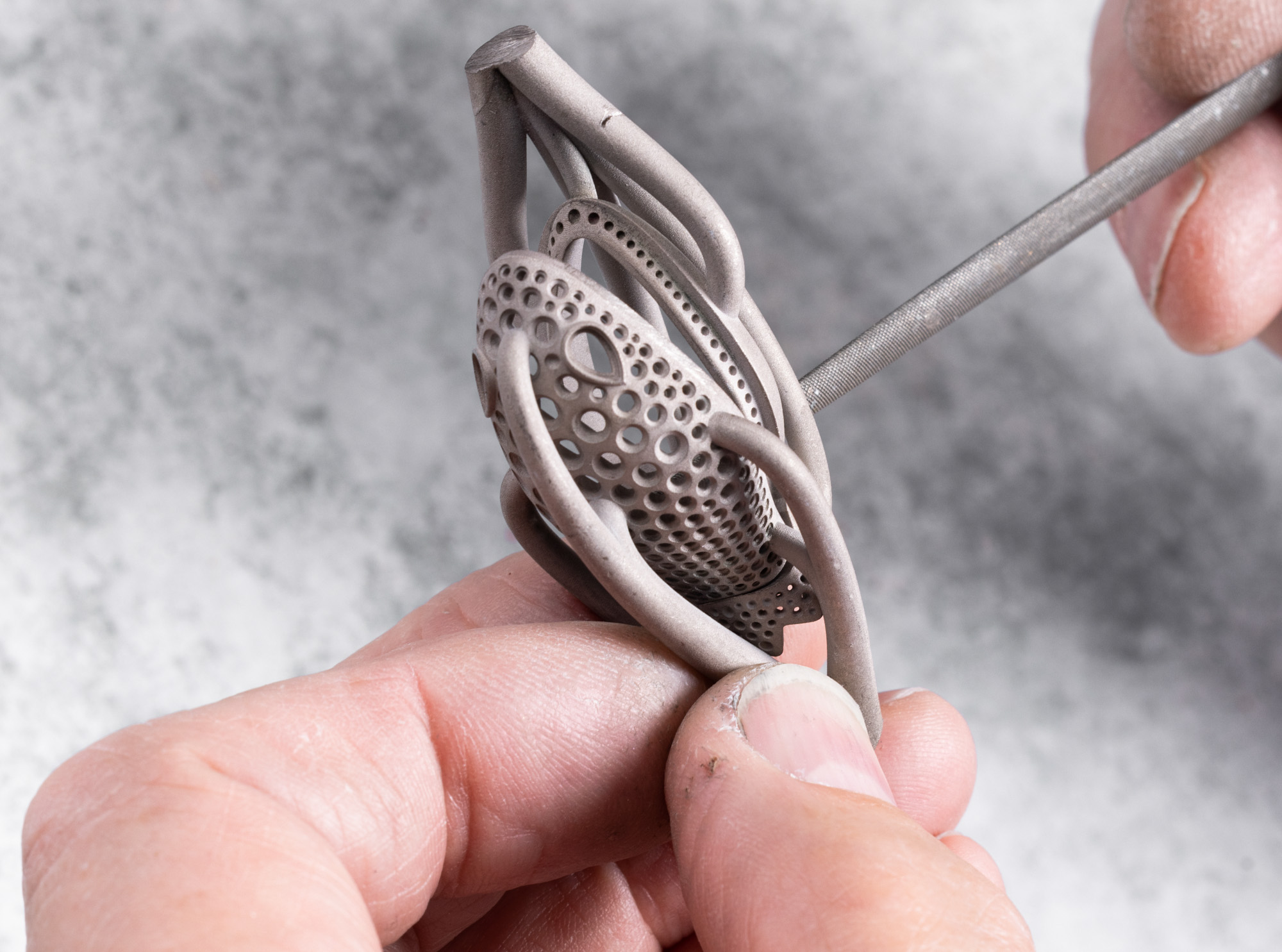 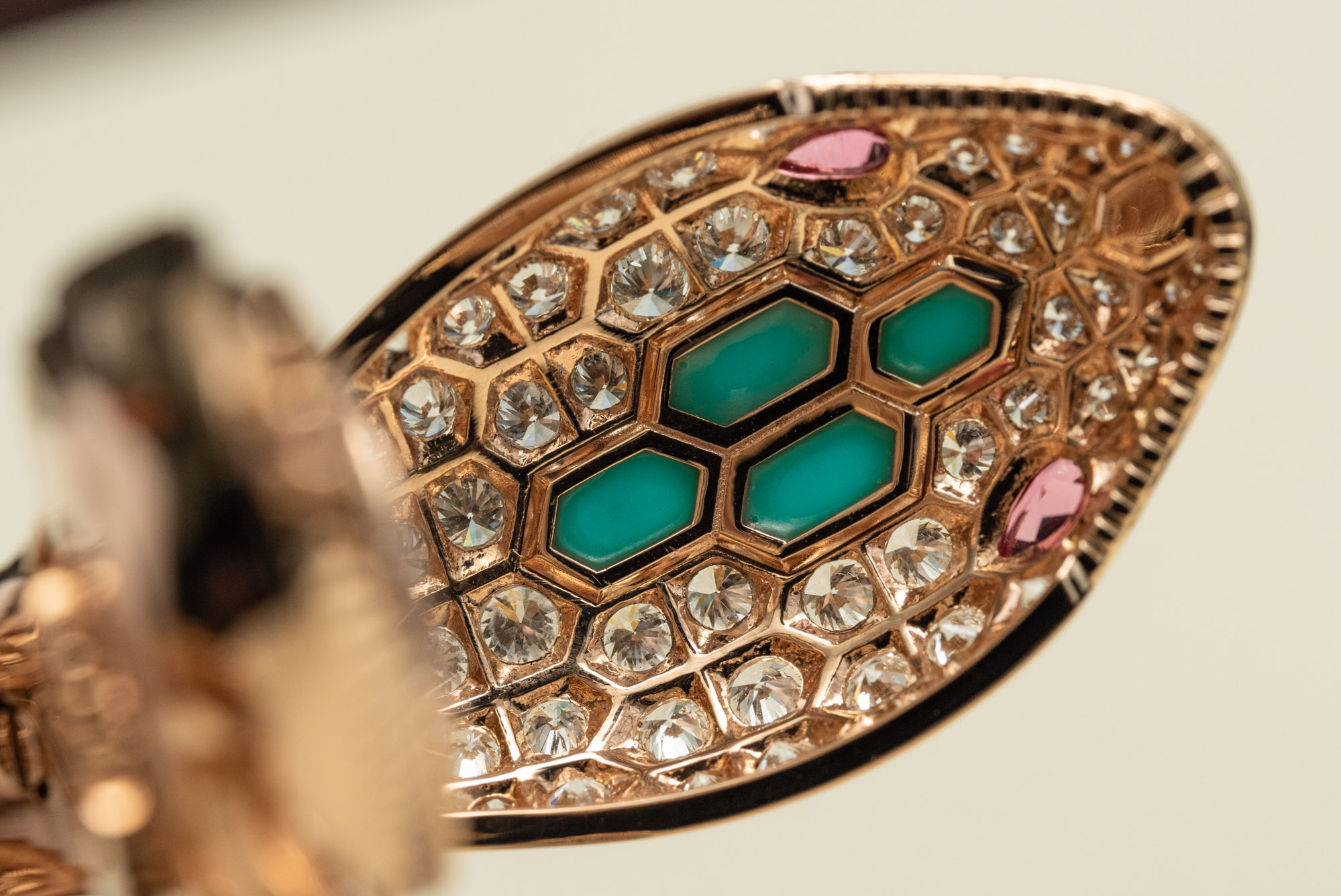 The flip-side of the head reveals all the settings and stones that we could only see from above until now, including the two pear-cut rubellites that function as the eyes on the reference above. All these could have easily been hidden, hiding any corrections or mistakes; but no, everything is on full display. 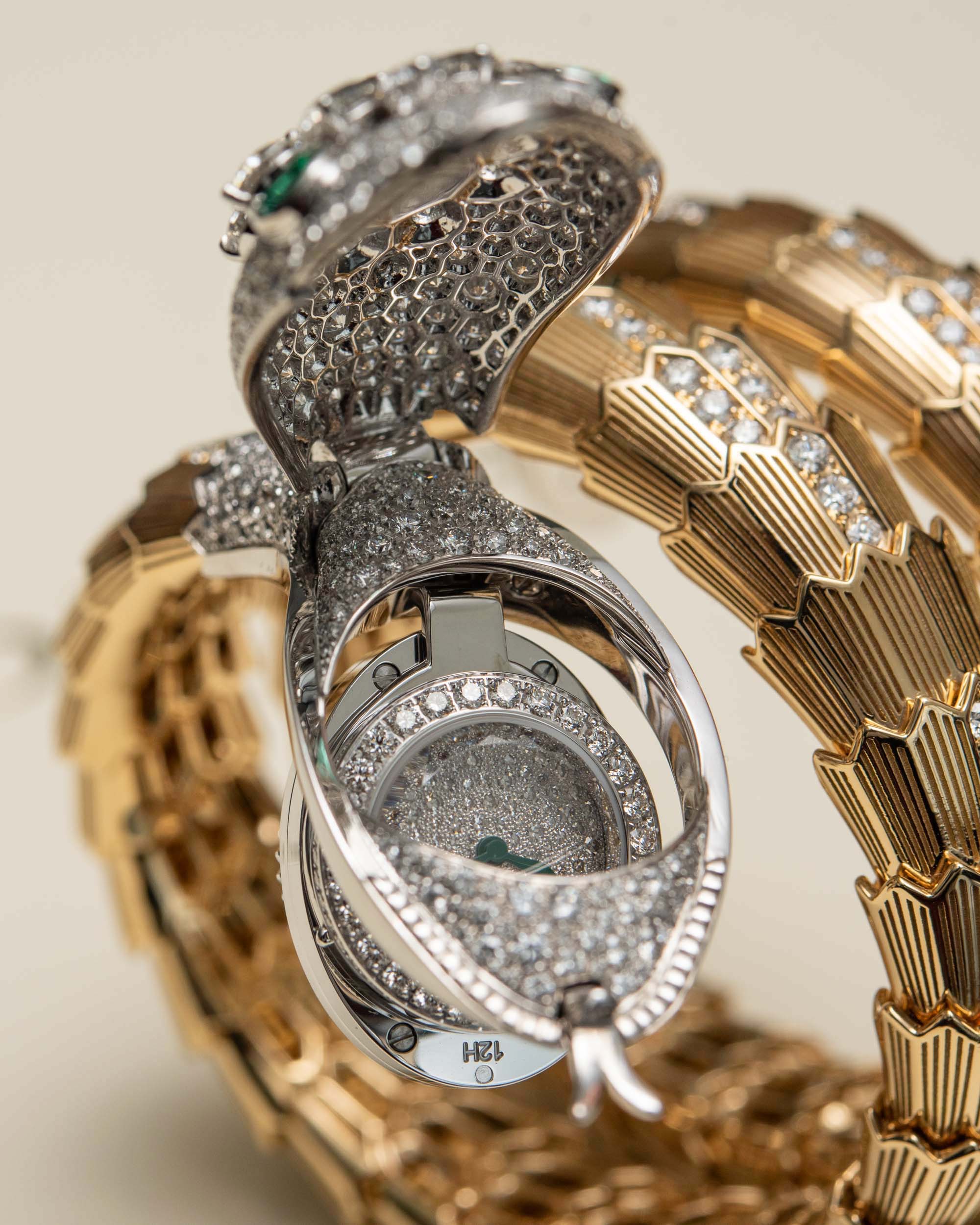 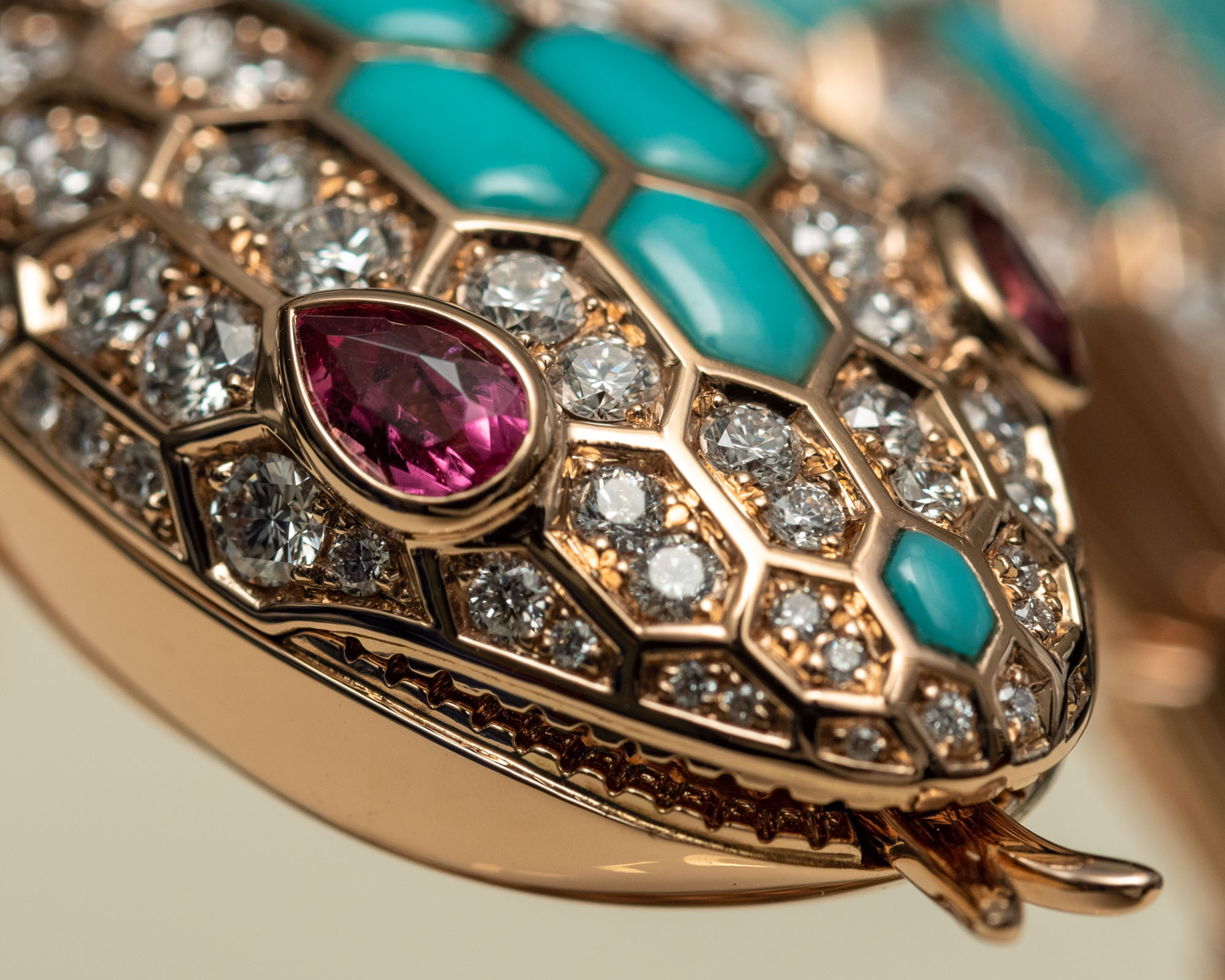 The heads and their features are menacing and full of character from the outside, as they very well should be on a Serpenti. Neither from afar nor from up close are these cutesy watches – if this extensive ribbon of gold and the 700-800 diamonds weren’t enough, the proportions, the finer details, and the overall message deliver the final blow to most all other women’s watches.

Bulgari was right to extensively research ancient cultures for inspiration, even if that clever move in itself would not have led to long-term success. Over previous decades, reaching back to the 1950s, and up to now, Bulgari has been handling the Serpenti with evident care and bravery – and has not outsourced, but rather nurtured, the talent it takes to keep this collection in its own, thus far impenetrable, universe.