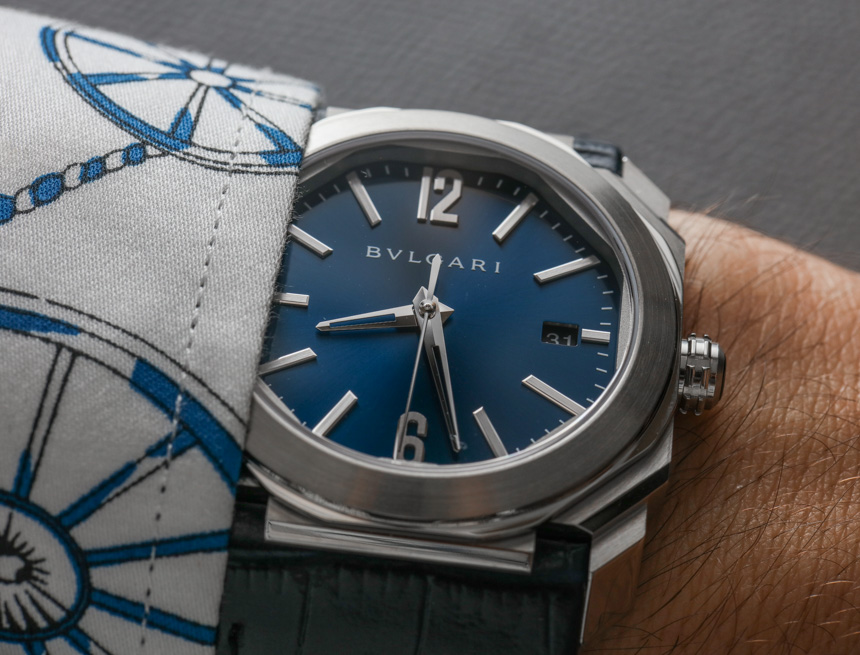 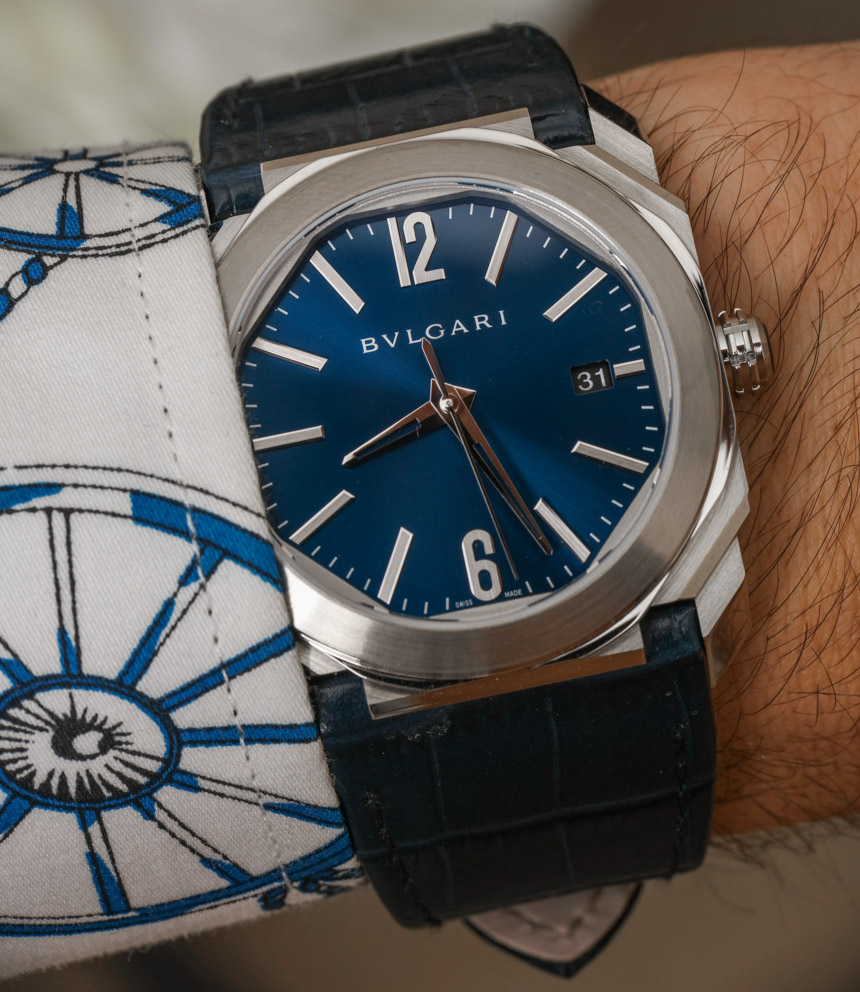 Bulgari is right to be heavily focused on further fleshing out the Octo watch collection given the attractive and distinctive shape of the Gerald Genta-designed case. Bulgari today has taken this now iconic design (that was ironically overshadowed for a number of years prior to Bulgari’s inclusion of it in their collection) and created a collection of modern, edgy, bold, yet elegant and refined men’s watches. 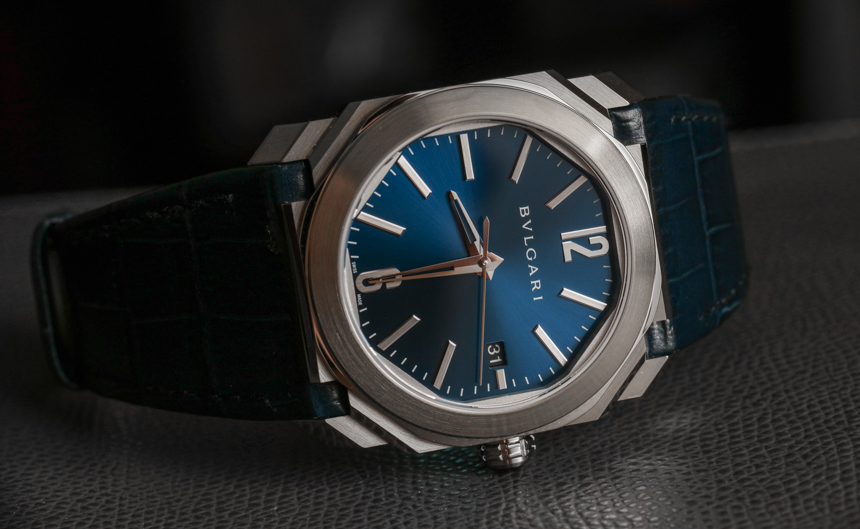 One of Bulgari’s more effective design decisions was to take the complicated Octo case and marry it with a simple dial. The Gerald Genta brand Octo watches came paired with exotic dials and movements which made them both rare and very expensive. Bulgari included their “designer touch” to the Octo by giving them much more minimal dials (which Bulgari creates in-house). Even though there are still some exotic Octo watches (such as the Octo Jumping Hour Retrograde, which they now refer to as the “Octo Retrogradi”), the majority that Bulgari produces have either a time-only (Solotempo) display or a chronograph (Velocissimo). 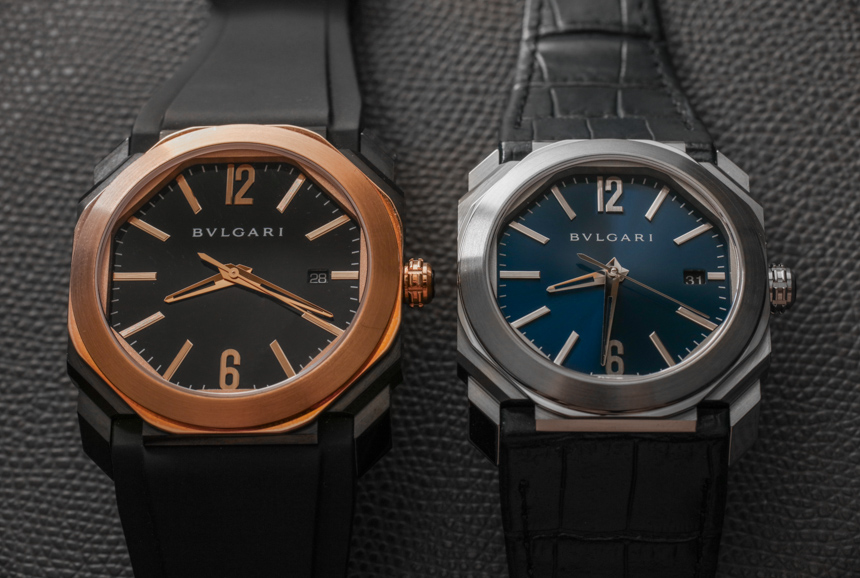 The point of this article is to feature the Bulgari Octo Solotempo 38mm watch which is the smallest Octo case currently produced. Bulgari currently produces the Octo in cases which are sized 38mm, 40mm, 41mm, and 43mm wide. Note that the Octo case tends to wear large given its overall square-shaped profile. A lot of the design is actually a sort of optical illusion which distracts from the mostly square shape. You have the dominant round bezel, octagonal dial, and bevy of other shapes, angles, curves, and levels.

Thus at 38mm wide, this Bulgari Octo Solotempo watch isn’t what I would call small, but rather a bit more minimal in its wearing experience than the larger sizes. I personally happen to find that the 40mm-wide Bulgari Octo Finissimo is the perfect case size – but then again, it is only 5mm thick, which changes the wearing experience. The majority of Octo watches I believe Bulgari sells are the 41mm models, both Solotempo and Velocissimo. 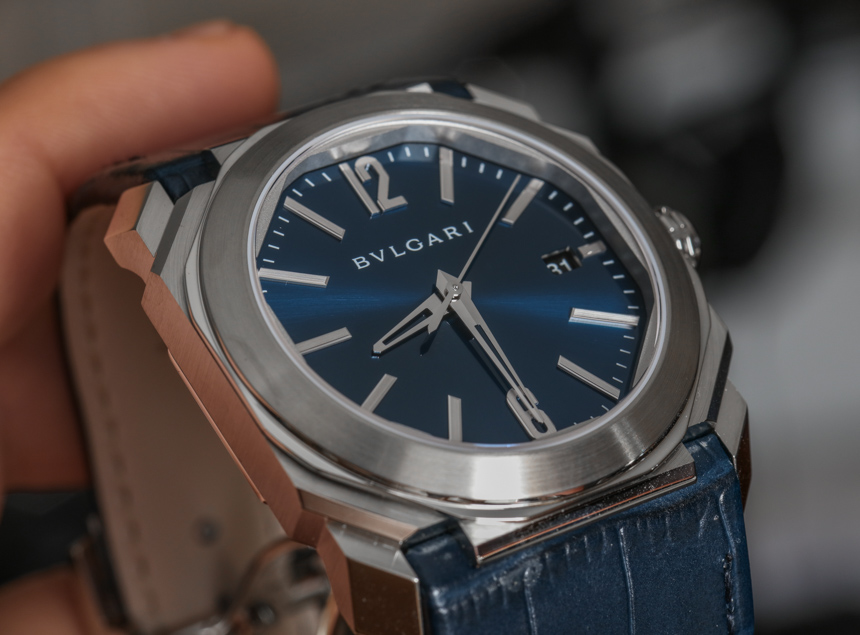 It would be inaccurate to characterize the Bulgari Octo Solotempo 38mm as a women’s watch. I don’t really think that Bulgari has a lady’s Octo, and they perhaps never should. Even though a woman can wear it, the Octo is a thoroughly masculine design that will look like a men’s watch even on a woman’s wrist. 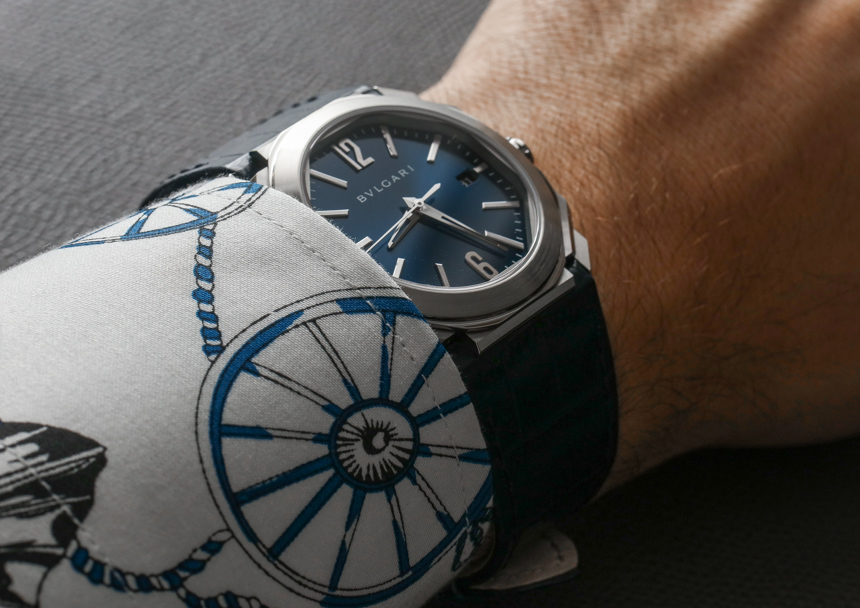 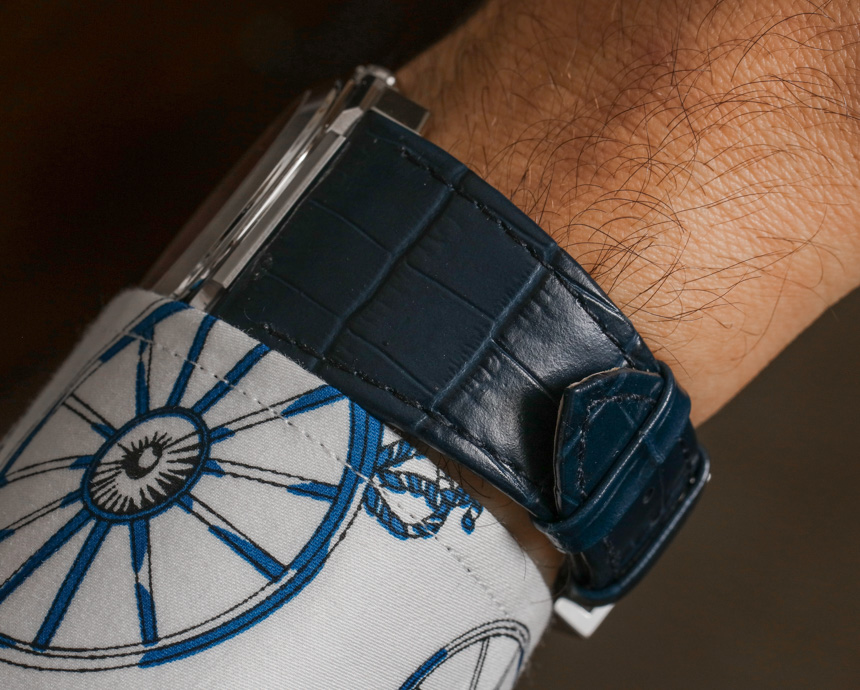 My best way of explaining the value of the Bulgari Octo Solotempo 38mm watch is as the Octo watch you wear with long sleeves. It is a rule in watch wearing that a smaller watch looks better with long sleeves and alternatively a larger watch looks better when you are wearing short sleeves. Part of this is practical, of course, as people who frequently wear long sleeves want a timepiece that can slip under their cuffs. Aesthetically, there is something more proportionate about wearing a smaller watch (40mm wide and under) when wearing bulky sleeves. For this reason, more medium-sized watches are popular in places with colder weather, while larger watches are more popular in places with warmer weather (and thus fewer long sleeves). 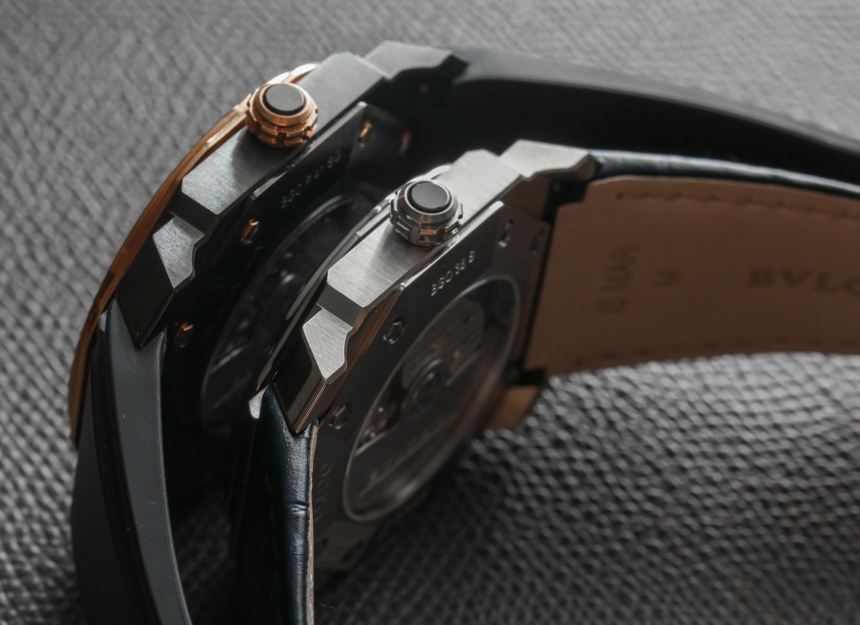 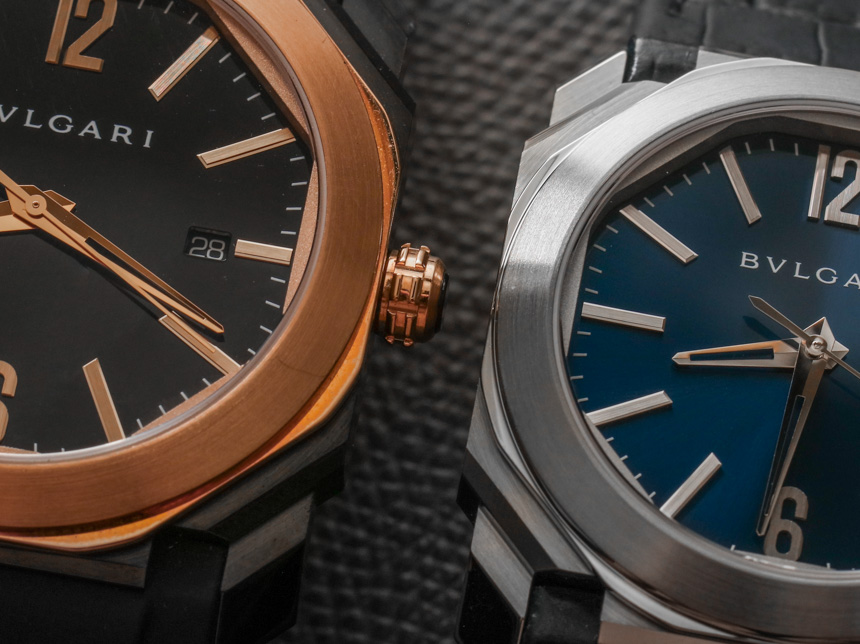 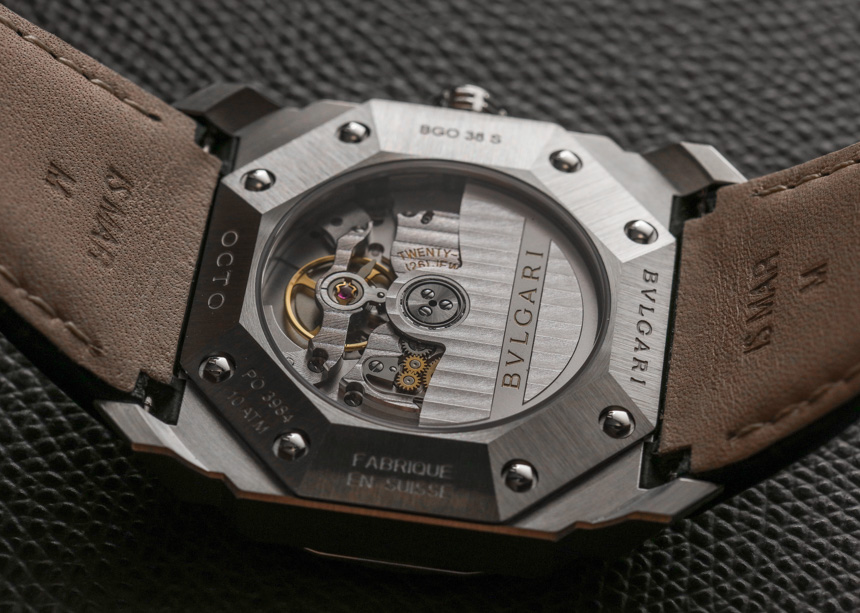 Allow me to elaborate quickly on the movement differences between that are in the 41mm and 38mm wide Octo Solotempo models. Both of the movements are in-house-made by Bulgari. The larger 41mm wide Octo contains the Bulgari caliber BVL 193 automatic movement which offers the time and date. It operates at 4Hz (28,800bph) and has a power reserve of 50 hours. Inside the Bulgari Octo Solotempo 38mm is the similar but slightly different Bulgari caliber BVL 191 that has a slightly shorter power reserve of 42 hours. Funny enough, the two movements are the same diameter (25.60mm) so it is unclear as to why the smaller Octo Solotempo has a different movement. One reason might simply be price. Bulgari charges $650 more for the Octo Solotempo 41mm on a strap than for the Bulgari Octo Solotempo 38mm on a strap. It is possible that the difference in movements is simply to help create more product differentiation. 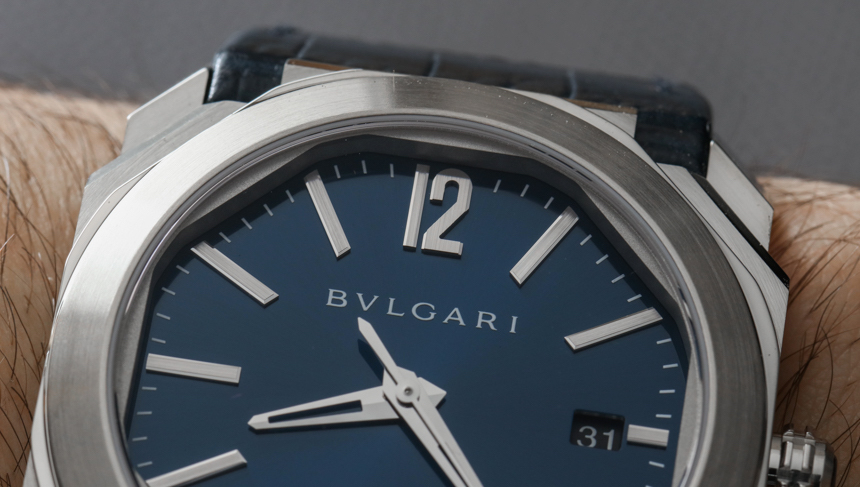 For a classy dress watch with some attitude, there are few better choices out there than the Octo range, so it is good that Bulgari offers enough variety. Little details such as the black cabochon in the crown and the detailed finishing of the case are easily highlights of the collection. Bulgari might benefit from increasing the legibility of the dial in the future because the polished hands can disappear in certain lights. There is also no luminant on the dial, which is something a lot of wear wearers are looking for. I would like to say that the applied brushed hour markers are very nice-looking and I love the distinctive 12 and 6 o’clock marker font style. 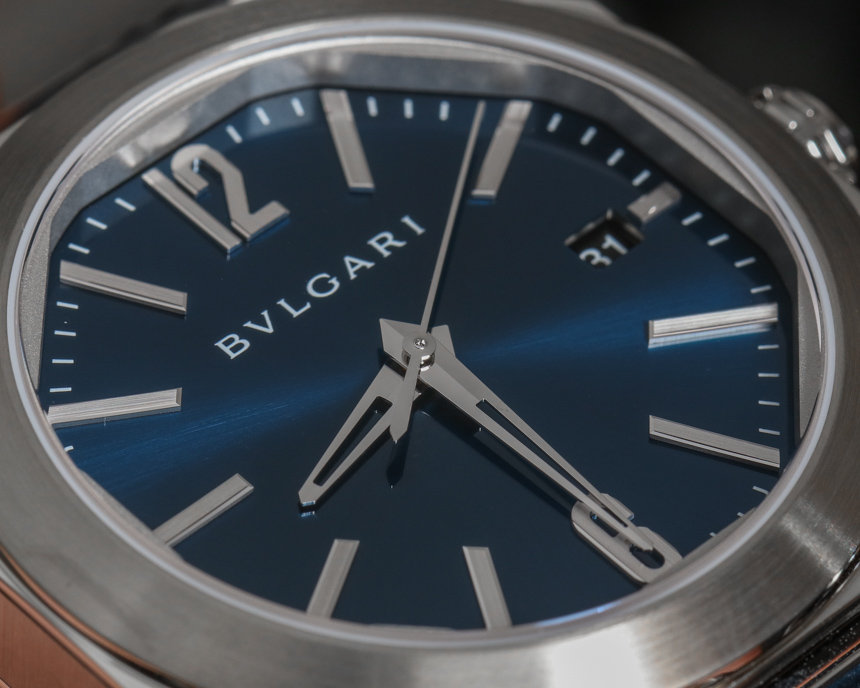 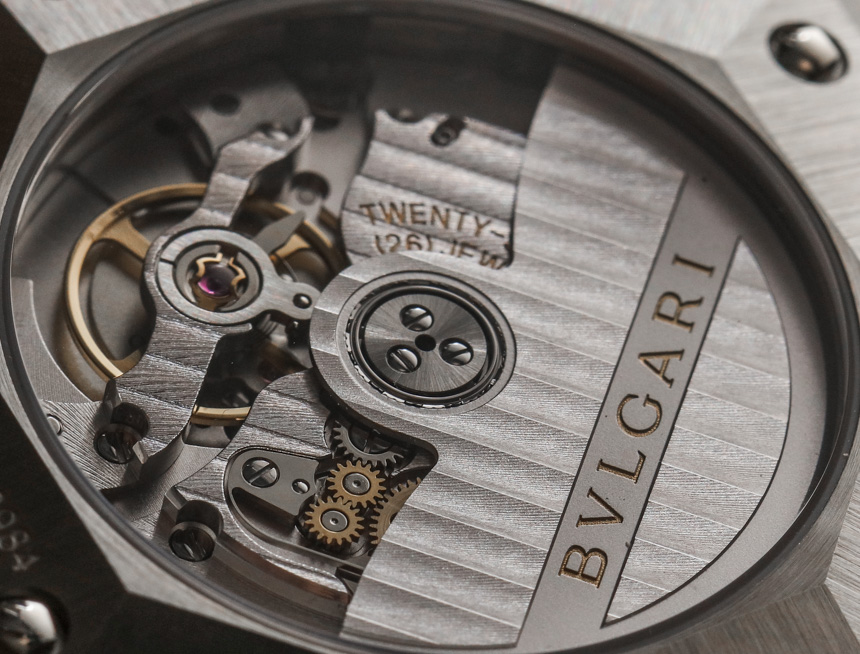 This particular Bulgari Octo Solotempo 38mm watch model in steel (water resistant to 100 meters) is the reference 102429 BGO38C3SLD and comes with the blue sunray dial that is given a lacquered polish. This blue model is also available as the reference 102105 BGO38C3SSD that comes with a matching steel bracelet (a very cool bracelet, I might add). Note that if you want the Bulgari Octo Solotempo timepiece with the blue dial, the 38mm wide model is the only option currently available. 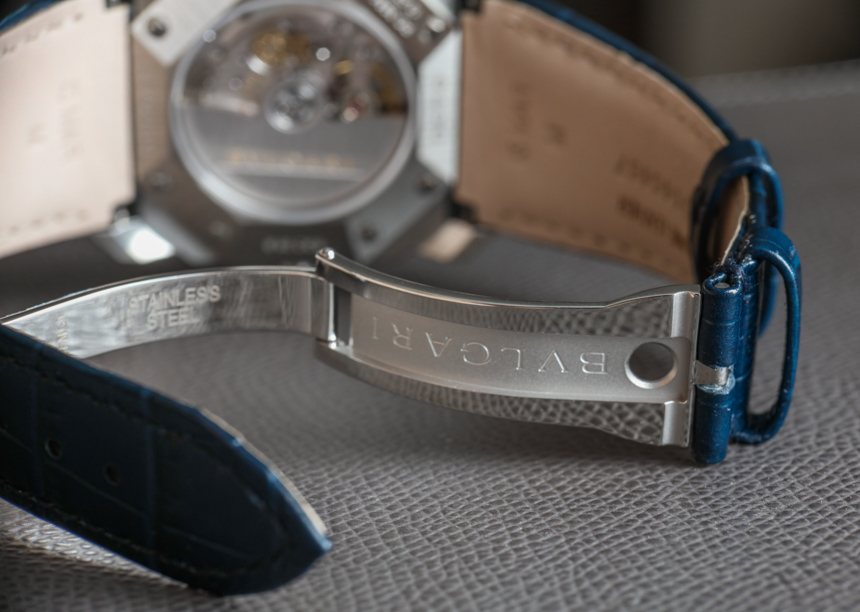 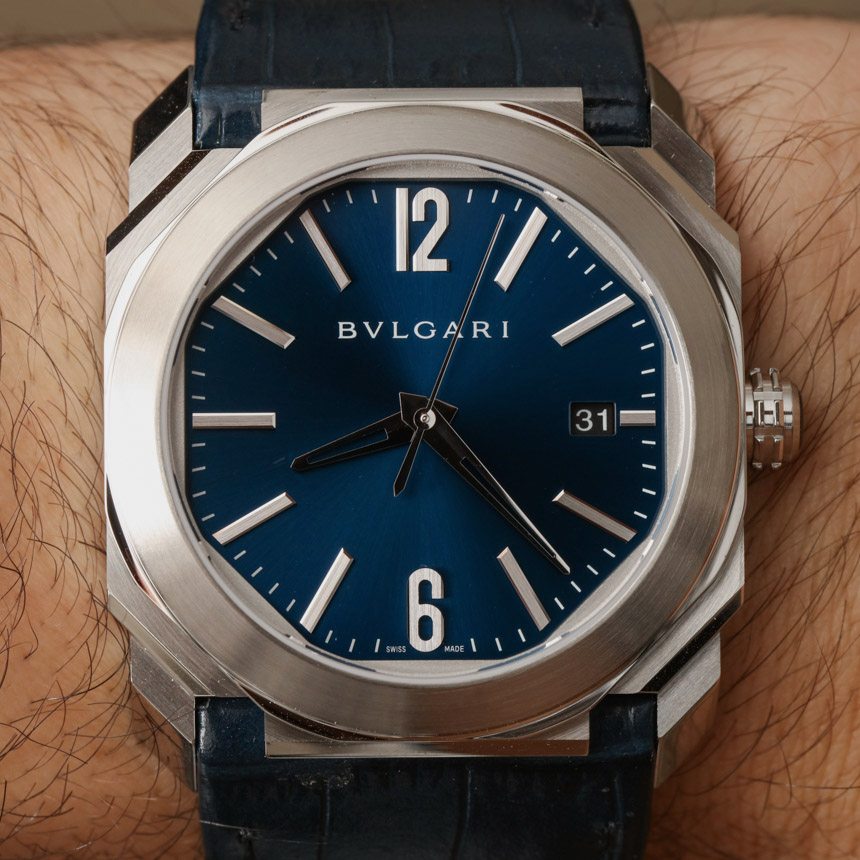