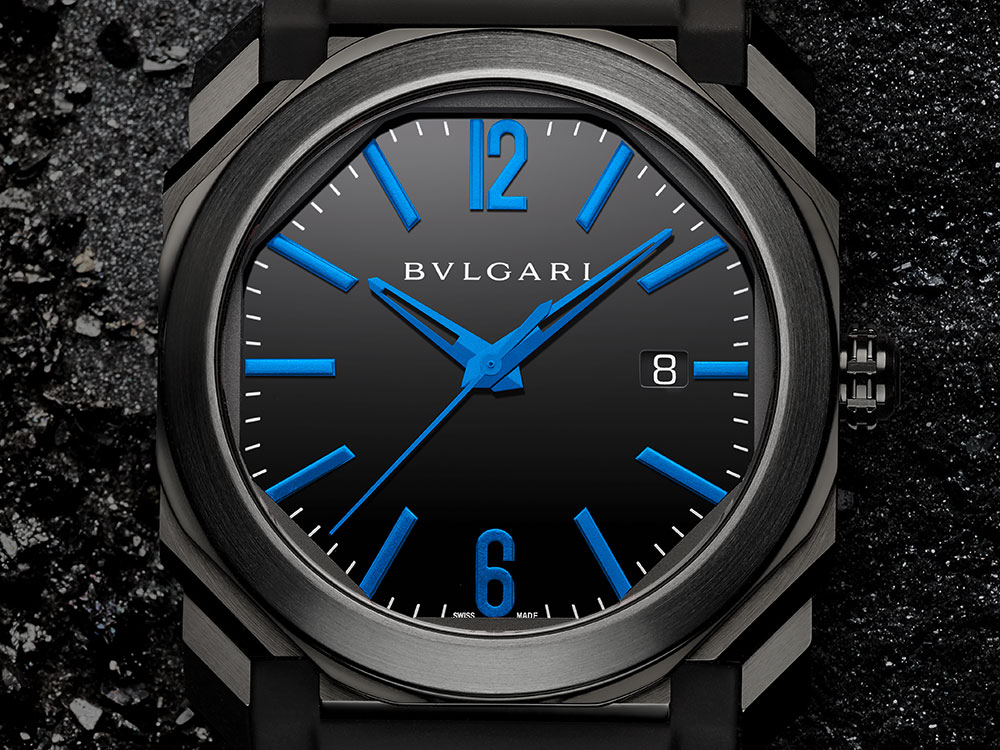 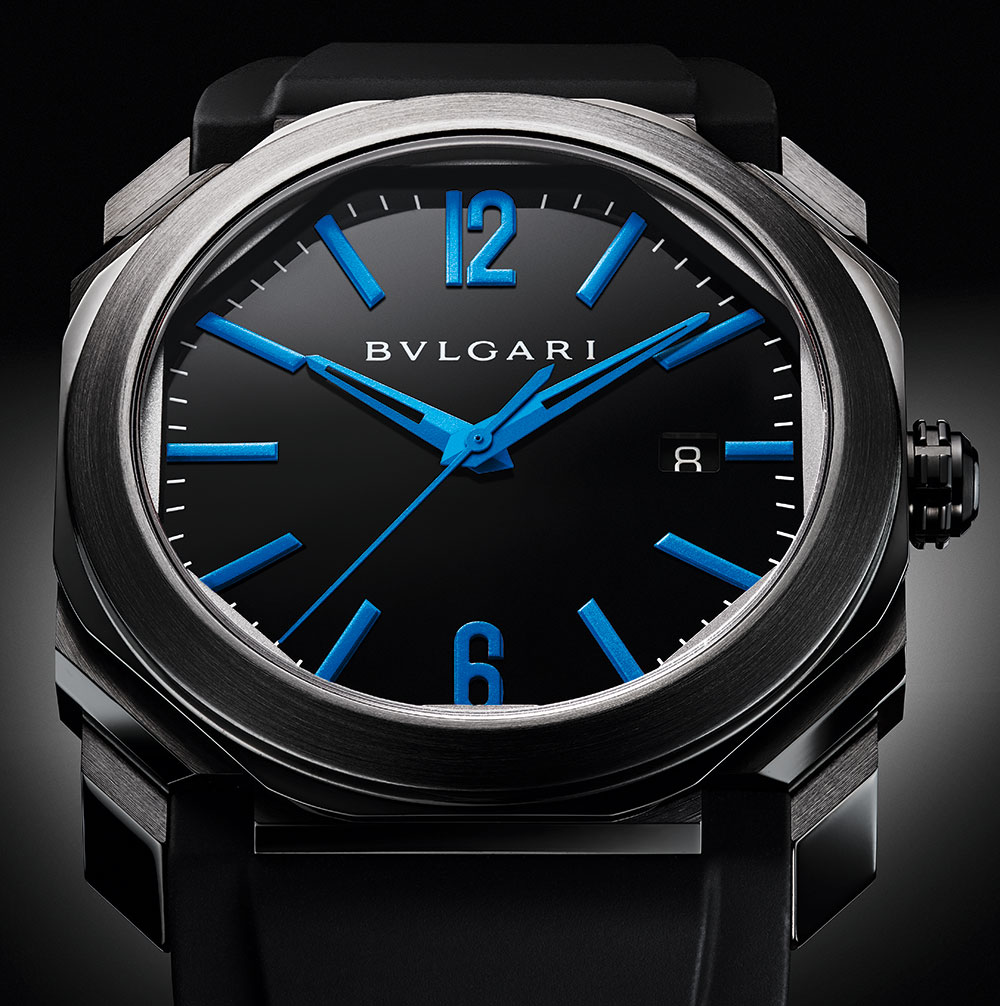 Bulgari is a major force in the world of all things luxury, and there is no denying they are also heavy hitters in the world of watchmaking. An understanding of trends helps keep Bulgari’s watch collections dynamic and interesting with a broad range from formal to sporty styles, but backed up with impressive in-house movements. For 2017, the trendy-looking “ultra black” DLC-coated Bulgari Octo Ultranero line was expanded with three new models, including a totally blacked-out model and one with popping red highlights, introduced at Baselworld. And, in the further spirit of bright colors on a pitch-black background, the Bulgari Octo Ultranero Americas Limited Edition later joined them with vividly contrasting blue hands and markers. 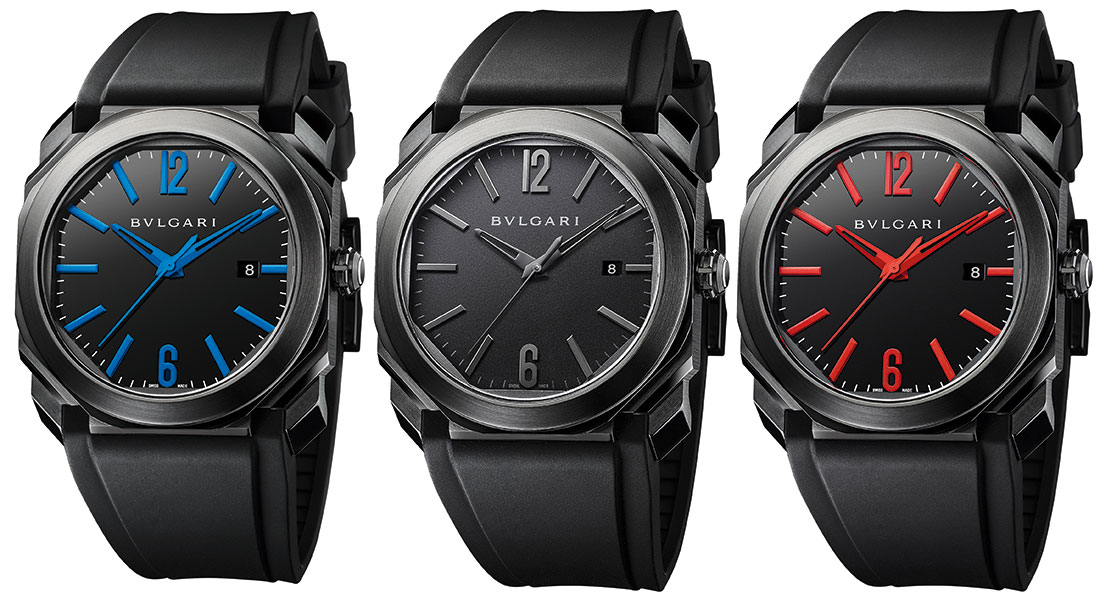 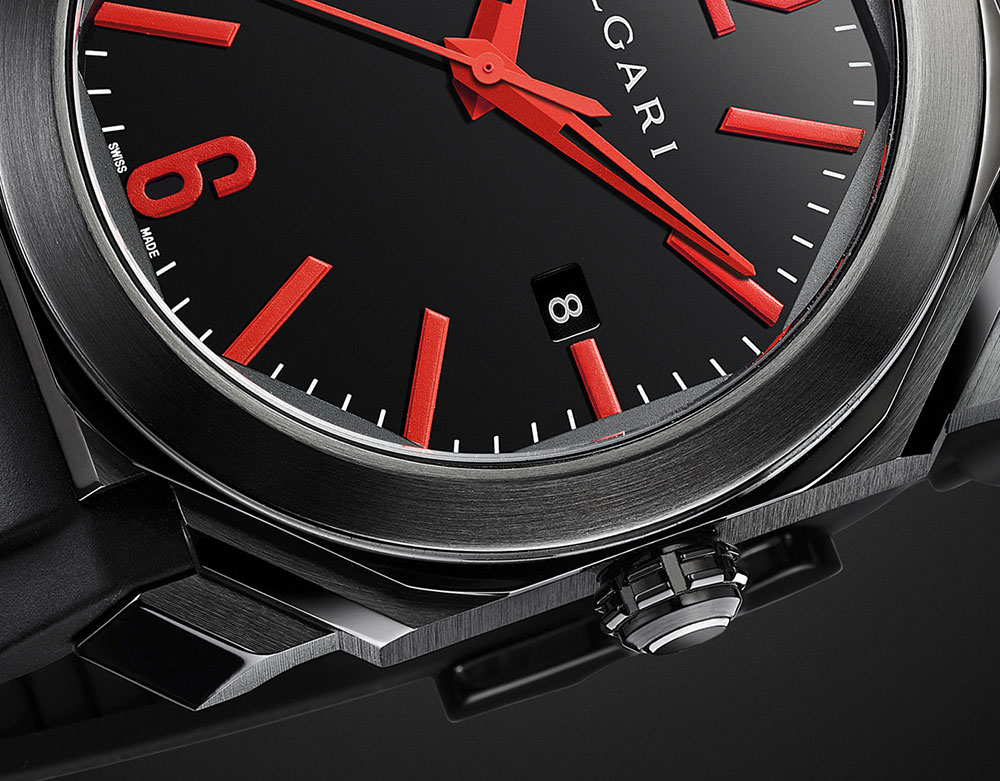 Built on Gerald Genta’s design as a sports watch and released as a main collection in 2012, the Octo has grown to be Bulgari’s most popular line of watches. Bulgari claims the design for the Octo is in part inspired by the arches of the Maxentius Basilica in the Roman Forum, and we’ll take their word for it. One thing you can say for sure about the Octo is that it looks like nothing else, and the Ultranero versions are perhaps even more off-beat. 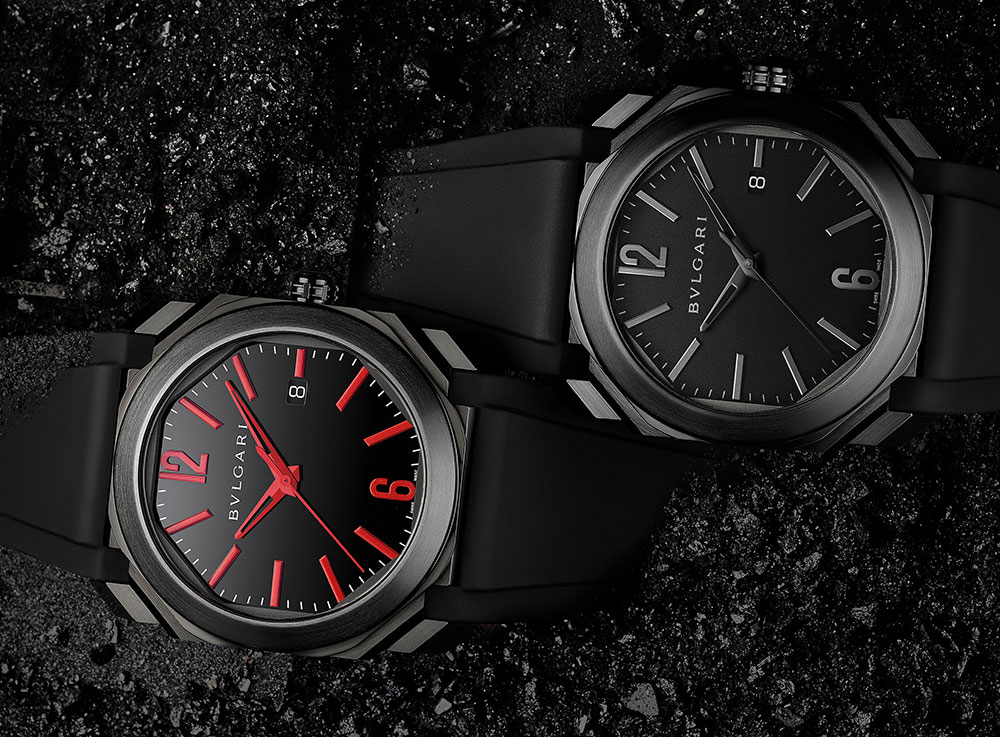 Bulgari’s Octo Ultranero watches, released initially in 2016, are built around the same reasonably sized 41mm stainless steel case as the Octo and powered by the in-house manufactured, highly decorated BLV191 Solotempo (time only) automatic movement with a 50-hour power reserve and a rotor mounted on ceramic ball bearings. The movement is visible through an exhibition case back, and for the Bulgari Octo Ultranero Americas Limited Edition version the case back has the design of the Americas in blue, though Bulgari hasn’t provided case back images for now. 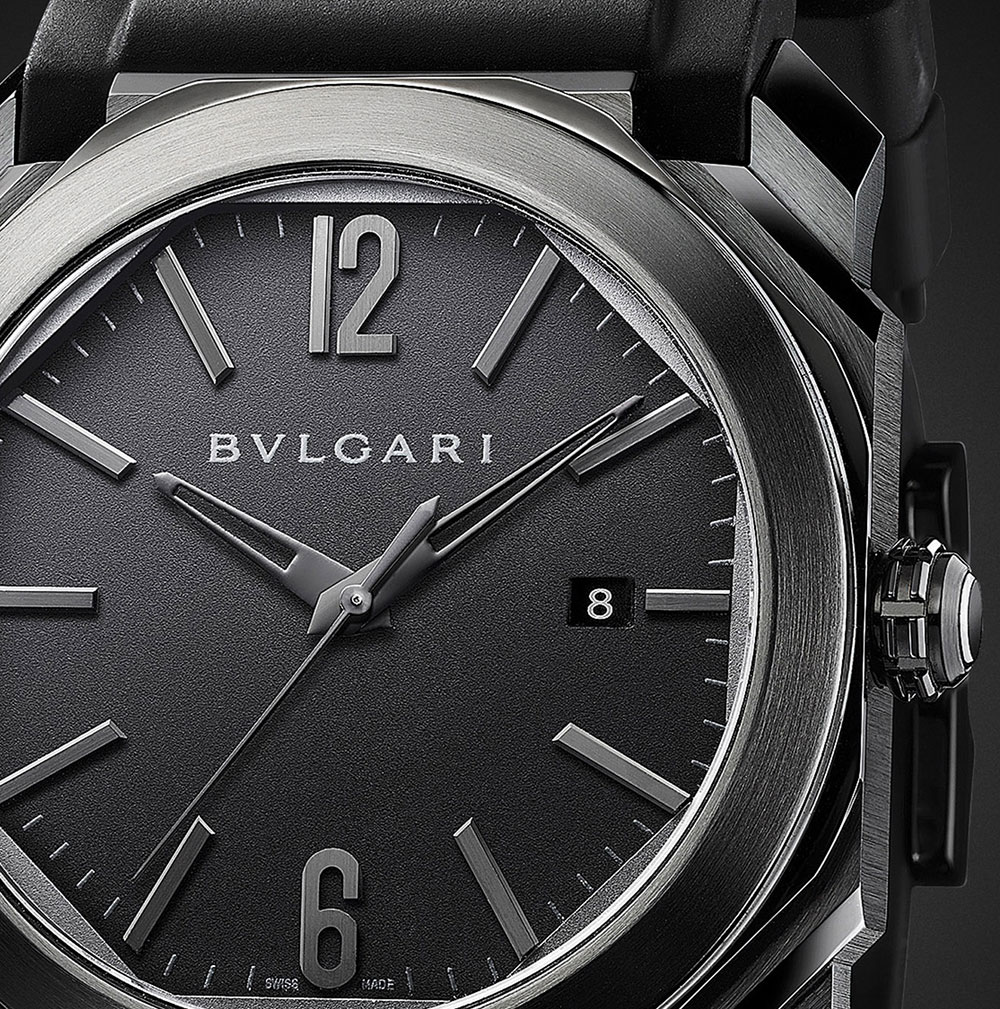 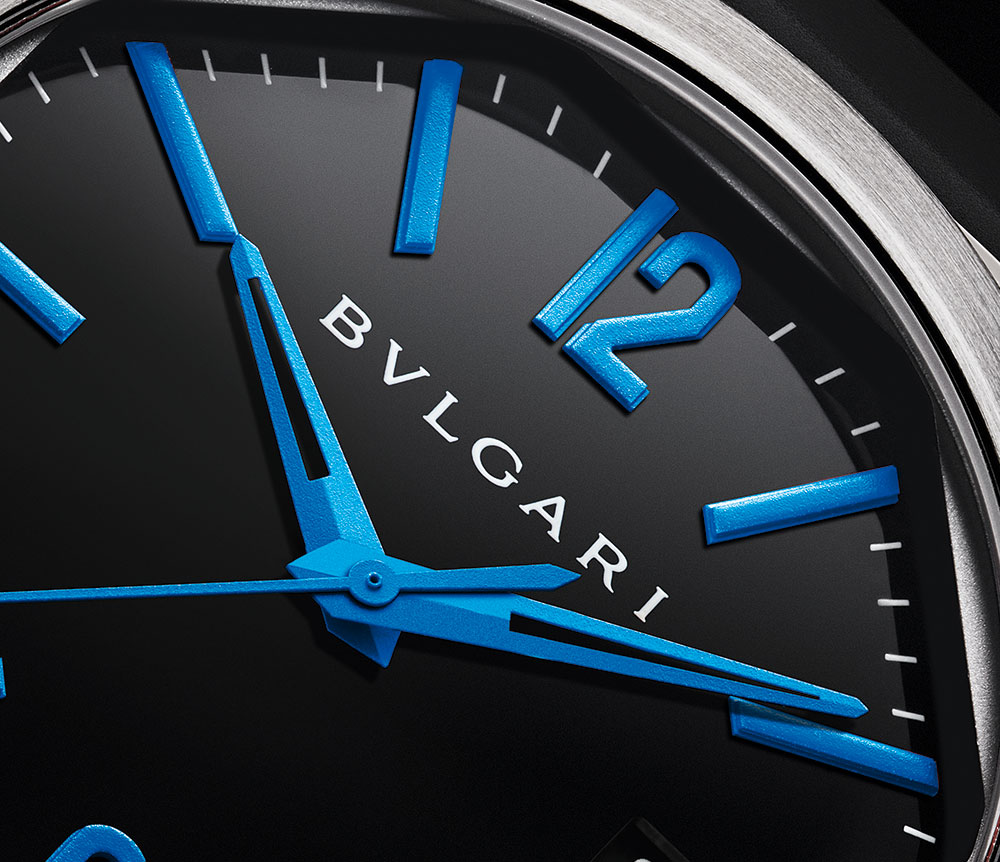 The in-house movement no doubt contributes to the somewhat hefty price tag – but so does the highly complicated case, along with the name on the deep black lacquered and polished dial. A screw down crown and case back ensure the Octo is capable of 50m of water resistance, though Bulgari claims to test the Ultranero to 100m. It’s kind of hard to fit the Bulgari Octo into traditional watch categories, but it is probably not intended for too much ruggedness. “Versatile” might be the goal, and edgy it certainly is, but the omission of luminant on the dial makes it harder to call the Octo genuinely “sporty” despite vibrant colors and brooding masculine cases, as these models exhibit. 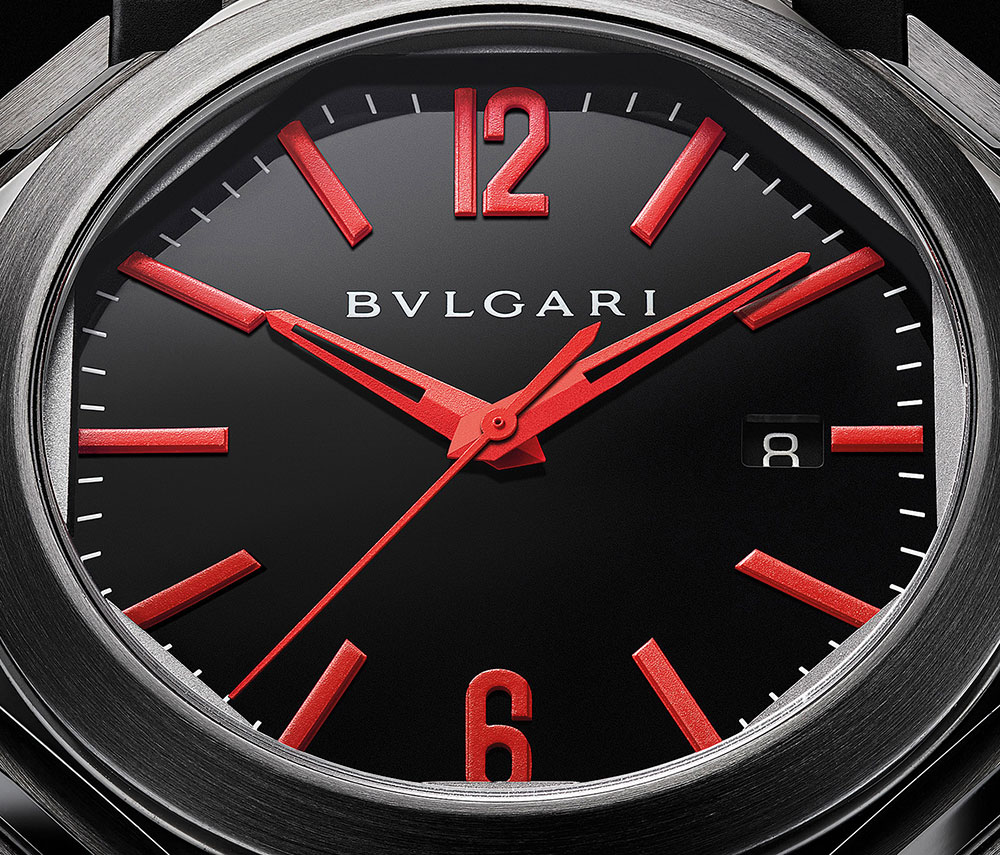 The Bulgari Octo Ultranero’s 41mm-wide and 10.4mm-thick case is a very reasonable size for a wide range of wrist sizes, and while the squarish shape of the the Octo helps it to wear boldly, the deep black color reduces visual mass at the same time. And, the extremely high-quality rubber strap adds to its wearability. The Ultranero collection sports DLC (diamond-like carbon) coating on the case as well as the buckle, which should help its scratch-resistance.

Building a watch for a specific market as Bulgari has done with the Americas Limited Edition is common nowadays. Though, it must be said that such a broad geographical area with two continents that include 35 disparate countries makes it a limited edition focused on its availability and colors rather than appealing to those who want to express some sort of regional affiliation. Available at select Bulgari boutiques throughout North and South America and limited to 250 pieces, the Bulgari Octo Ultranero Americas Limited Edition has a price of $6,950. The non-limited Bulgari Octo Ultranero watches are priced the same. bulgari.com