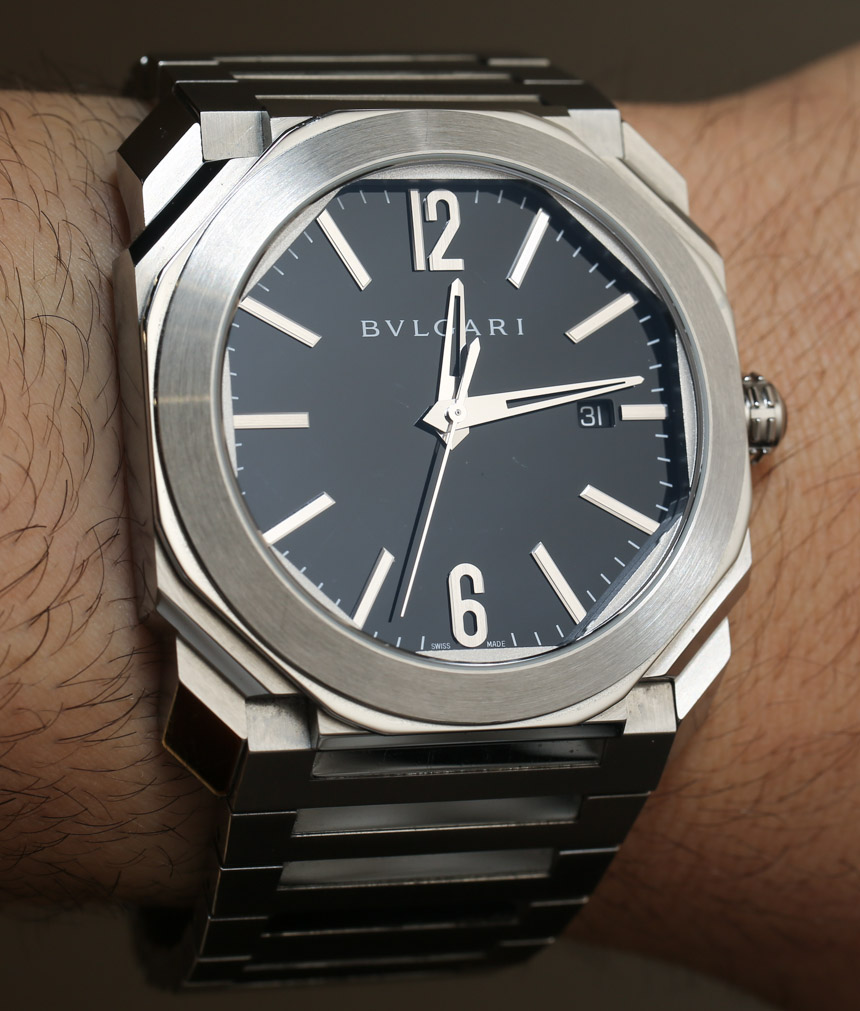 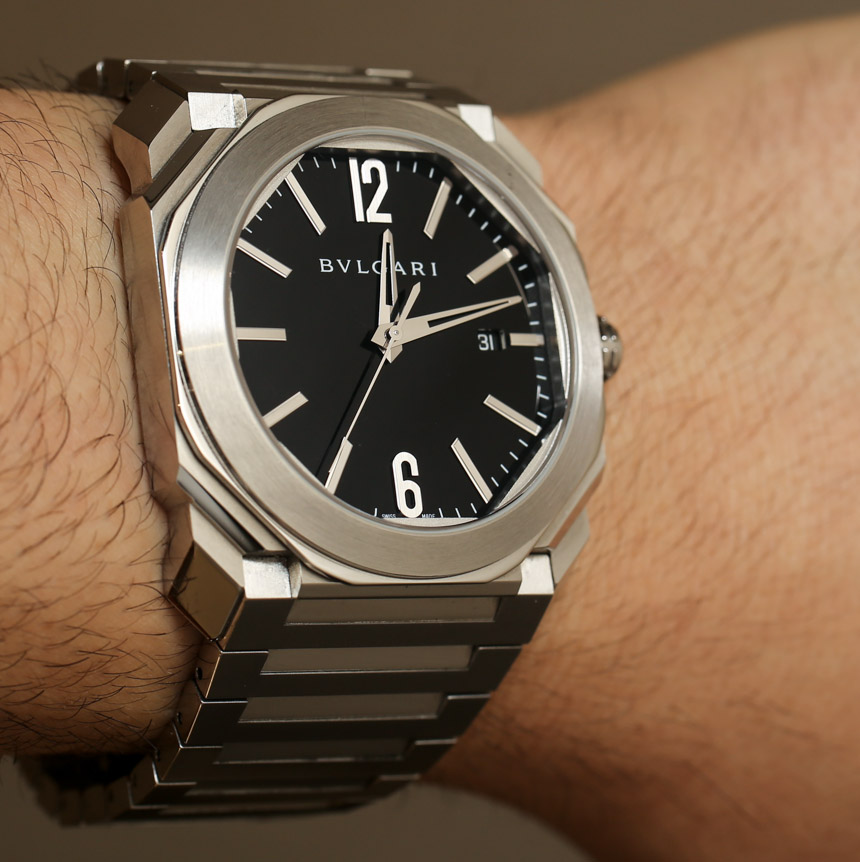 The legacy of Gerald Genta continues to live on in multiple forms. We now look at the Octo watch with Bulgari’s name on it, that for 2013, comes on a metal bracelet. Where did this story begin? The late designer resided in Monaco before his death (to cancer I believe). I think that while he worked in the watch industry for a large portion of his life, he always had a love/hate relationship with the industry that made him rich. Genta is most known for his work in the 1970s and 80s doing design work for brands such as Audemars Piguet and Patek Philippe, though he began his brand in 1969. Throughout his life as a watch designer, his sole motive was to produce very ‘different’ watches, and he had some fantastically wealthy sponsors to help him do so.

The Octo was a watch case design that was released under the Gerald Genta name but later took on Bulgari (Bvlgari) branding. The story is a bit odd, but it makes sense if you look at it in context. As in most businesses it is a habit of larger companies to buy smaller companies. That is either to put them out of business or incorporate their value into the parent companies. Smaller, but noteworthy brands like Gerald Genta are routinely purchased by larger brands. Actually, in an ironic turn of events, the Gerald Genta brand was purchased by Bulgari in about 1999. Bulgari was then purchased by the larger LVMH luxury group a bit over a decade later. For a while Gerald Genta remained a free-standing brand. Then, during the financial crisis, Bulgari decided to consolidate and incorporated the Gerald Genta and Daniel Roth brands into the Bulgari brand (discussed here in 2010). This happened before the LVMH purchase of Bulgari.

At the time I predicted that the Gerald Genta and Daniel Roth names were not long for this world. I was correct. The first pieces under this new “uni-brand” had both the Bulgari and Gerald Genta (or Daniel Roth) names on them. To existing watch nerds such as myself this made sense. But as I pointed out then, this dual-branding was likely too confusing for brand novices. Pretty soon Bulgari decided to slowly retire the Gerald Genta and Daniel Roth name, but retained some of those brands’ key values such as case and movement designs. All of this leads up to the Bulgari Octo, which of course is a hybrid design based on the Gerald Genta Octo case, and a traditional looking Bulgari dial. We first discussed the Bulgari Octo watch when it was released last year on a strap. I highly recommend you check out that earlier post for a bit more info. This year nothing is new save for a bracelet option. Bulgari (and its competitors) has the habit of doing this – releasing a watch and then coming out with small additions or variations in subsequent years to continually offer something new and fresh.

I liked the Octo long before it had a Bulgari name on it. Though under the Genta name the Octo never had such a simple dial as this. In fact, for much of the last decade or two, the Gerald Genta brand was dedicated to coming out with truly insane watches. Some beautiful, some fugly, but all marvelous for what they were. The Octo was a unique creation that continued to celebrate Genta’s fascination with eight-sided cases. The Royal Oak had eight sides, and so does the Octo, in addition to the sides of the inner bezel. If you think about it, the case design on the Octo is incredibly complex from a design perspective, because it looks so simple but isn’t. 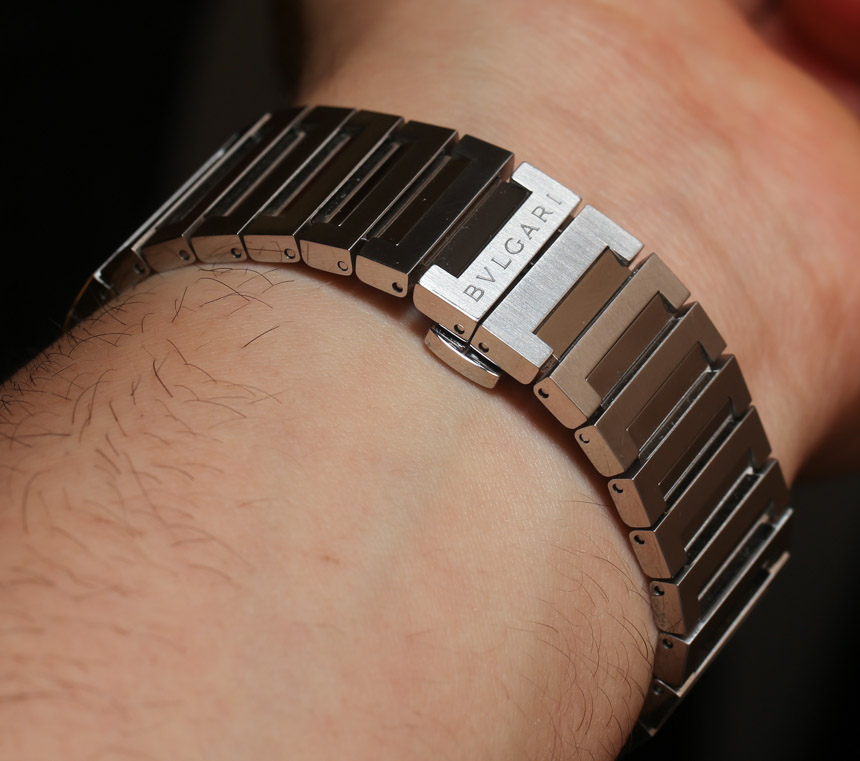