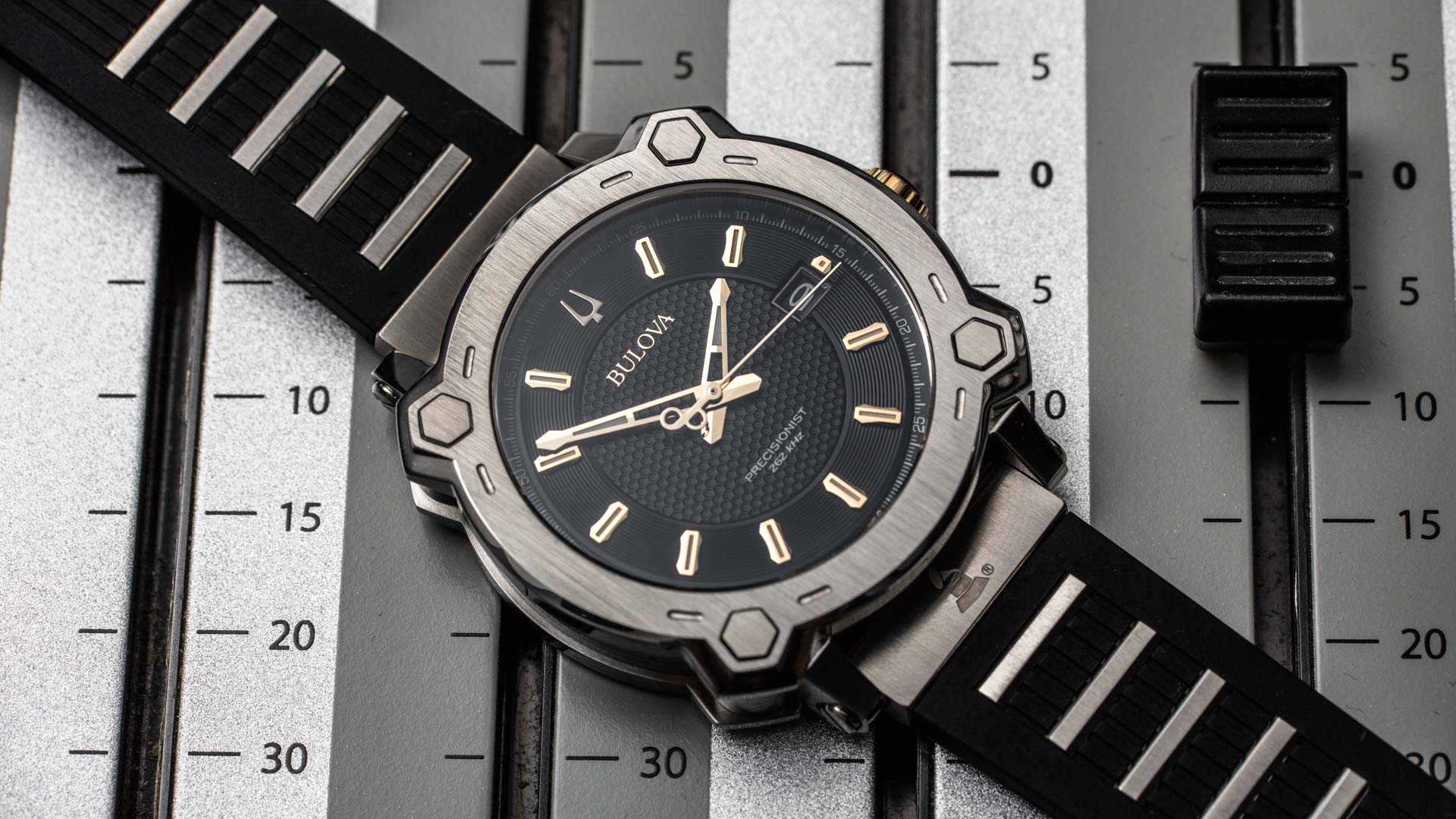 Bulova is currently the timepiece sponsor of the Recording Academy’s famed Grammy Awards, as well as the Latin Grammy Awards and the Grammy Museum. “The music industry’s biggest night” includes a stream of charity-related music initiatives, as well as an emphasis on music education and iconic hip-hop, all of which define Bulova’s current mix of music-world partnerships. The Bulova brand has made the strategic decision to invest heavily in the world of music, both its legacy stars and the next generation of music superstars. 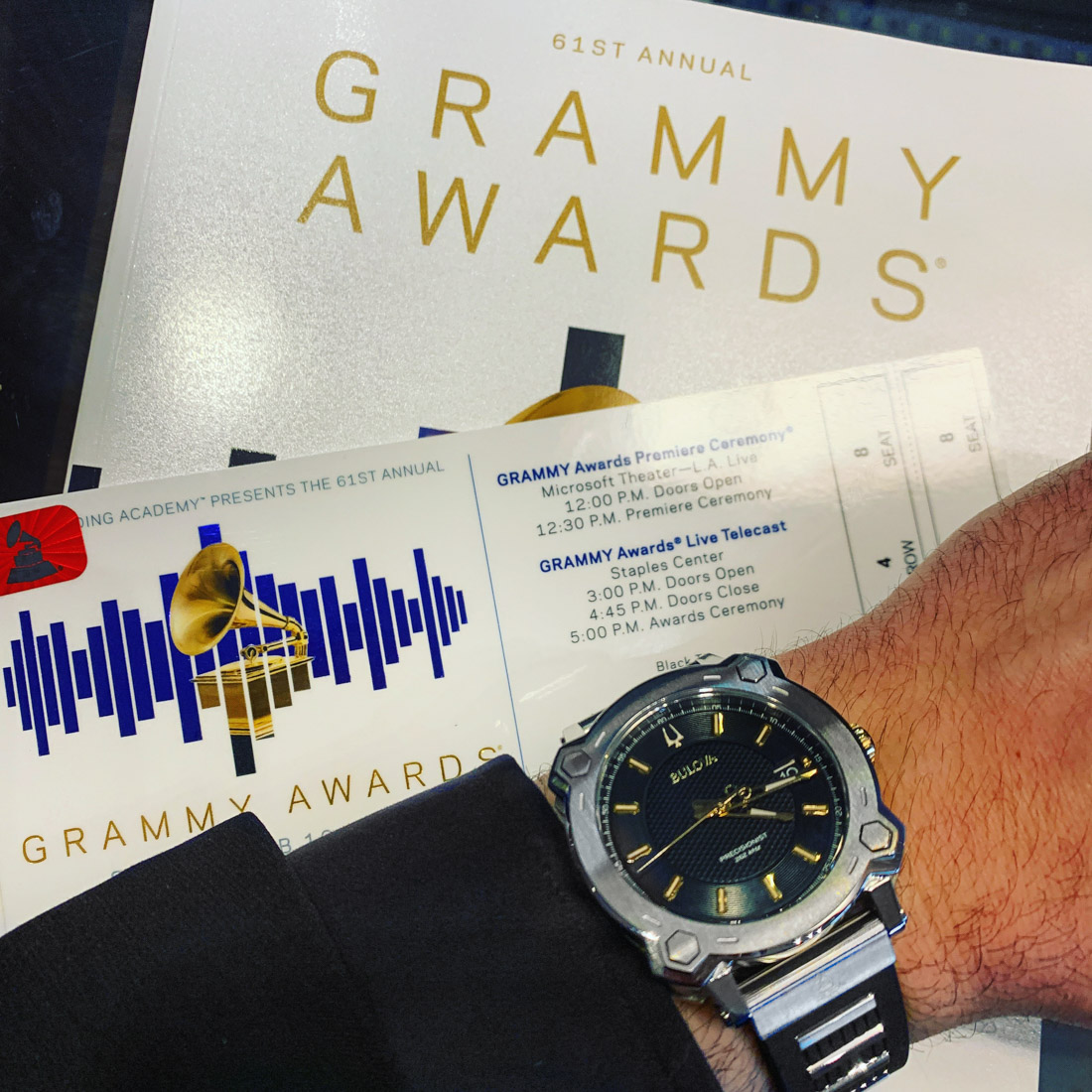 A strength at American-operated Bulova has always been their understanding of America’s large size and difficult-to-reach mass-market consumer base. European luxury watch brands often struggle to identify winning strategies to reach large swathes of American buyers with marketing messages. Bulova — with its history of serving massive markets — has marketing sophistication built into their DNA. (Bulova was the first company to ever have radio and television commercials.) A few years ago, I spent time with Bulova as they partnered with the European football club Manchester United, with a message that reached hundreds of millions of people. In a similarly grand scope, Bulova’s partnership with the Grammy Awards is based on a big idea about reaching passionate people keen on feeling good, accentuating their personal look, and staying hip. 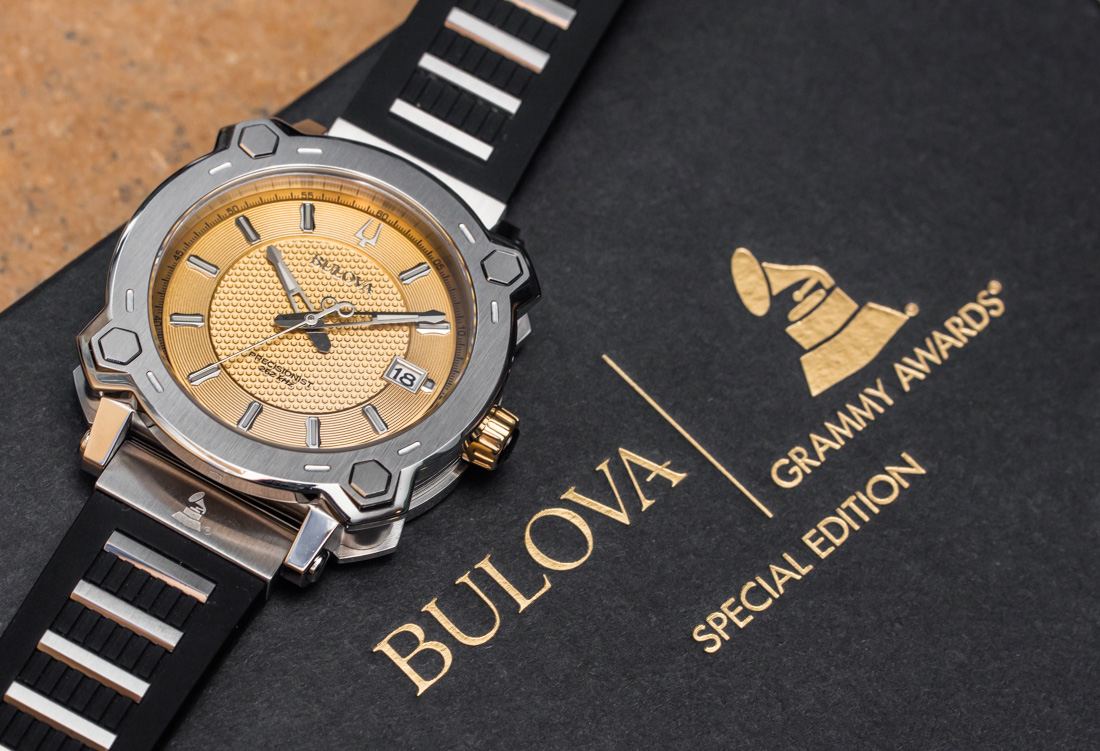 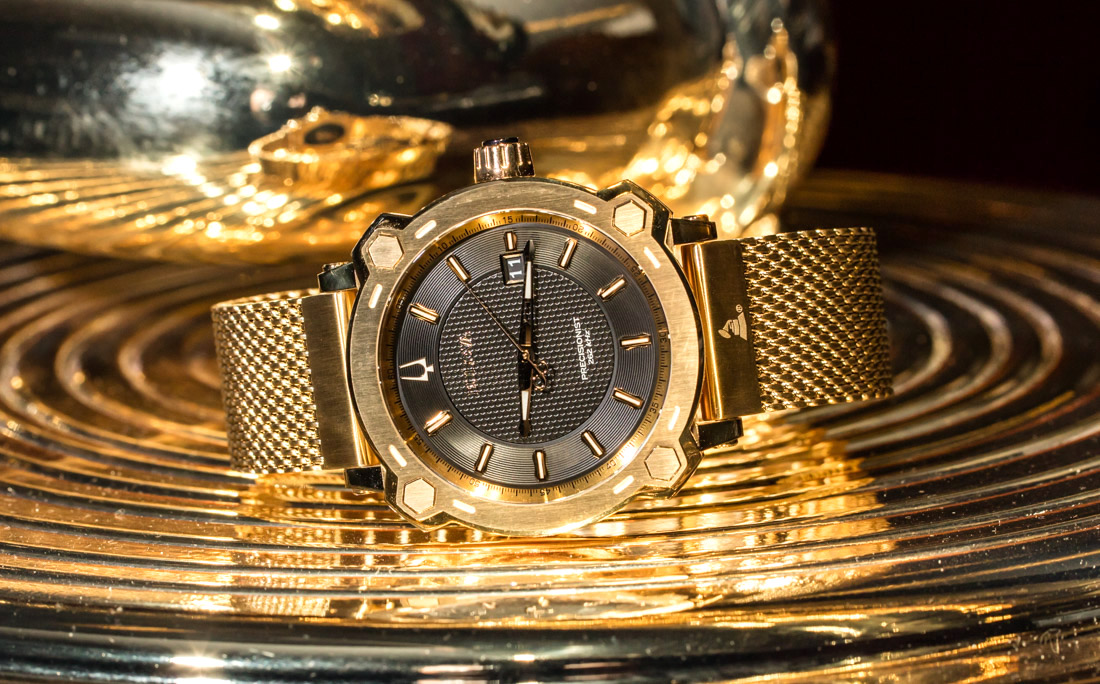 In a perfect world, people would grow up with the Bulova name before ever seeing a Bulova product. By associating themselves with the world’s most prestigious recording music talent association, Bulova is not only connecting with tastemakers, but is also reaching people at key moments of success and achievement in their lives. In an era when wrist watches are sold more on sentiments and less on practical necessity, such a strategy is more than sound. 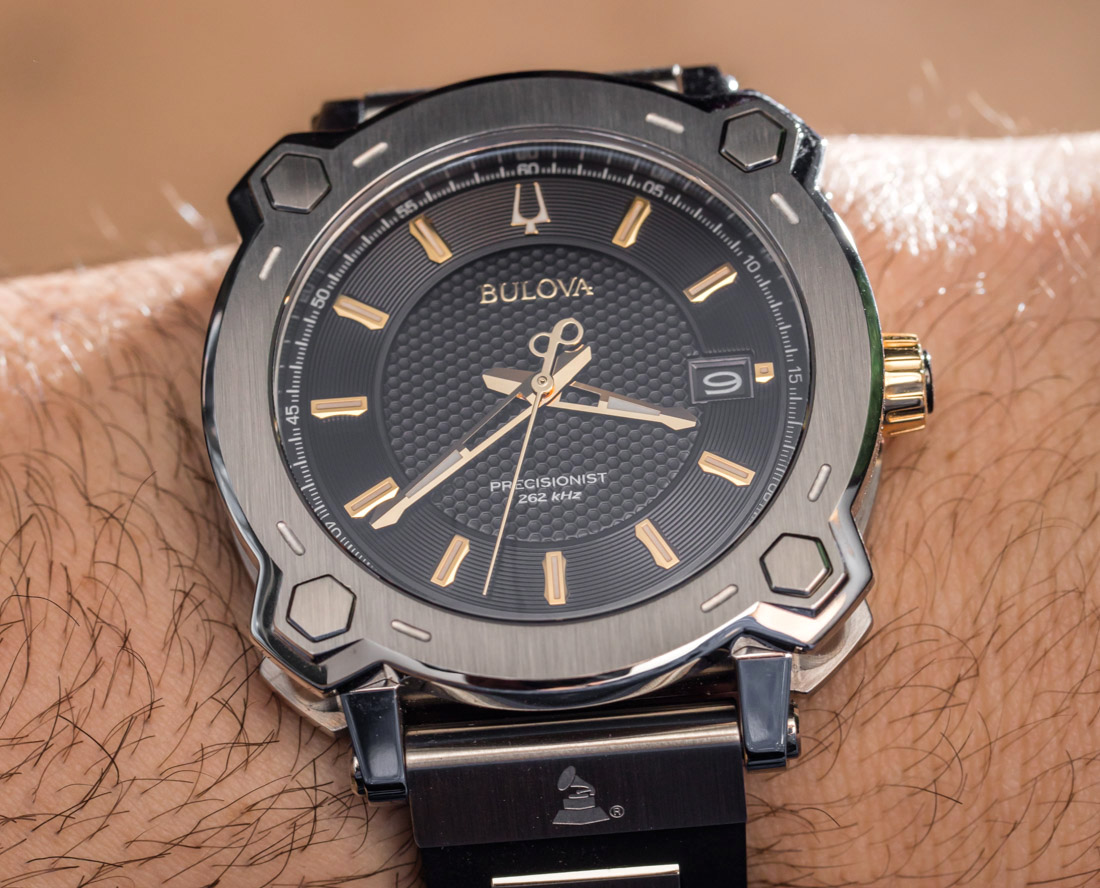 This particular Bulova watch on my wrist, and featured in most of the images in this article, is the Bulova Precisionist Special Grammy Edition watch — one of a few timepieces in the brand’s collection that is subtly co-branded with the Recording Academy logo (thankfully, not on the dial). For the 2019 Grammy Awards, each first time nominee (not just winners) will get a version of this timepiece with a dial made out of Grammium (the unique alloy the Grammy Awards are produced from). Making sure the last, current, and next generation of recording artists know about Bulova is the brand’s main objective here. And anyone else who finds the partnership interesting can benefit by being able to purchase one of the various special edition Grammy Awards watches produced by the brand. 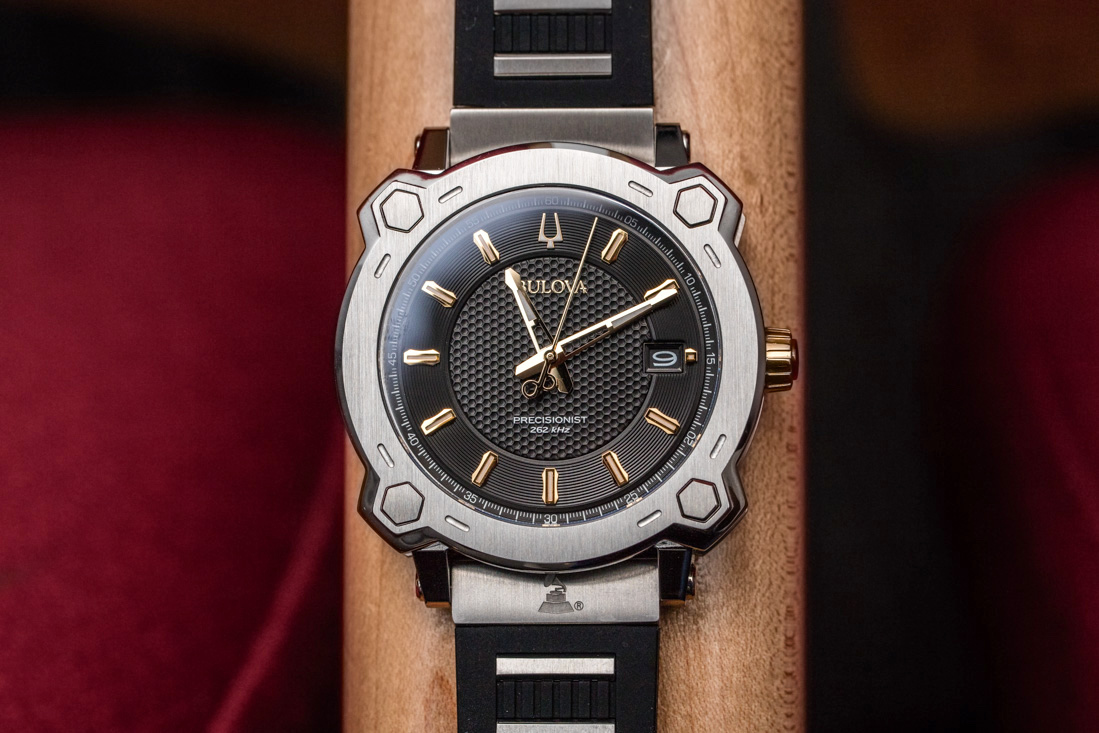 My relationship with this current version of the Bulova Grammy watch actually goes back to the Bulova Percheron watch model this particular version of the Precisionist is based on. Grammy Award participants might find it interesting that this distinctive case was first known as the Percheron and debuted in a more complicated form as the world’s most expensive Bulova timepiece. I debuted the Bulova Accu-Swiss Percheron here back in 2014, the first watch case in forged 24k gold at a price of $42,000 (with one of the most interesting watch bracelets I’d ever seen). 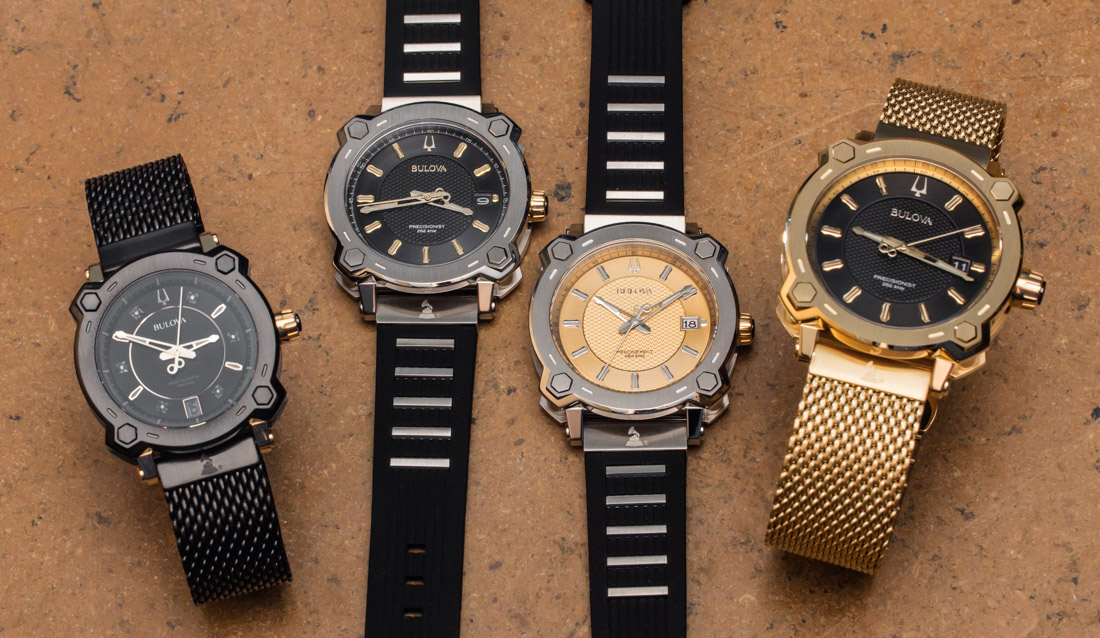 Later rebranding saw the Percheron case return with a high 262 kHz-frequency Bulova Precisionist movement, currently available in three sizes. The pictured ref. 98B319 model is 41mm-wide (12.4mm-thick), while Bulova also produces a 38mm-wide (intended for women) as well as a 44mm-wide (original size) version of this case. Stately and thick on the wrist, the case has personality and poise, even though its design isn’t for everyone. Most important is that when you see this aggressive, chunky-edged case, you don’t mistake it for anything else on the wrist. 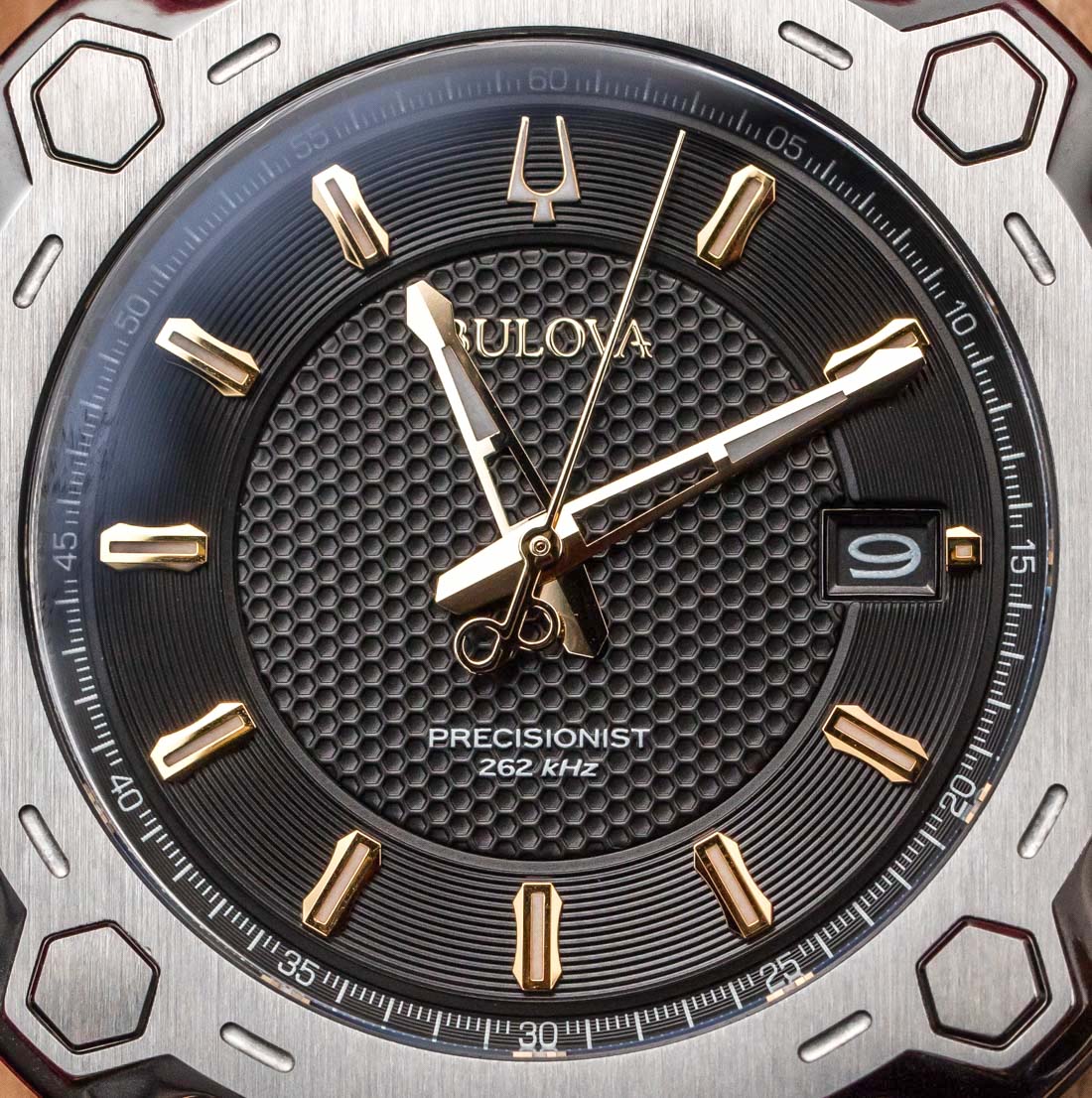 When Bulova redesigned the Percheron as the Grammy Awards watch, it made a slew of changes to the dial, with the notion of adding music-themed elements. The hands are said to be inspired by drumsticks, while the hex pattern in the inner dial invokes the mesh of speakers and microphones. New for 2019 is the silicone strap, which has metal rivets said to be guitar stem-inspired (even though we’ve seen strap design elements such as this on other timepiece products). 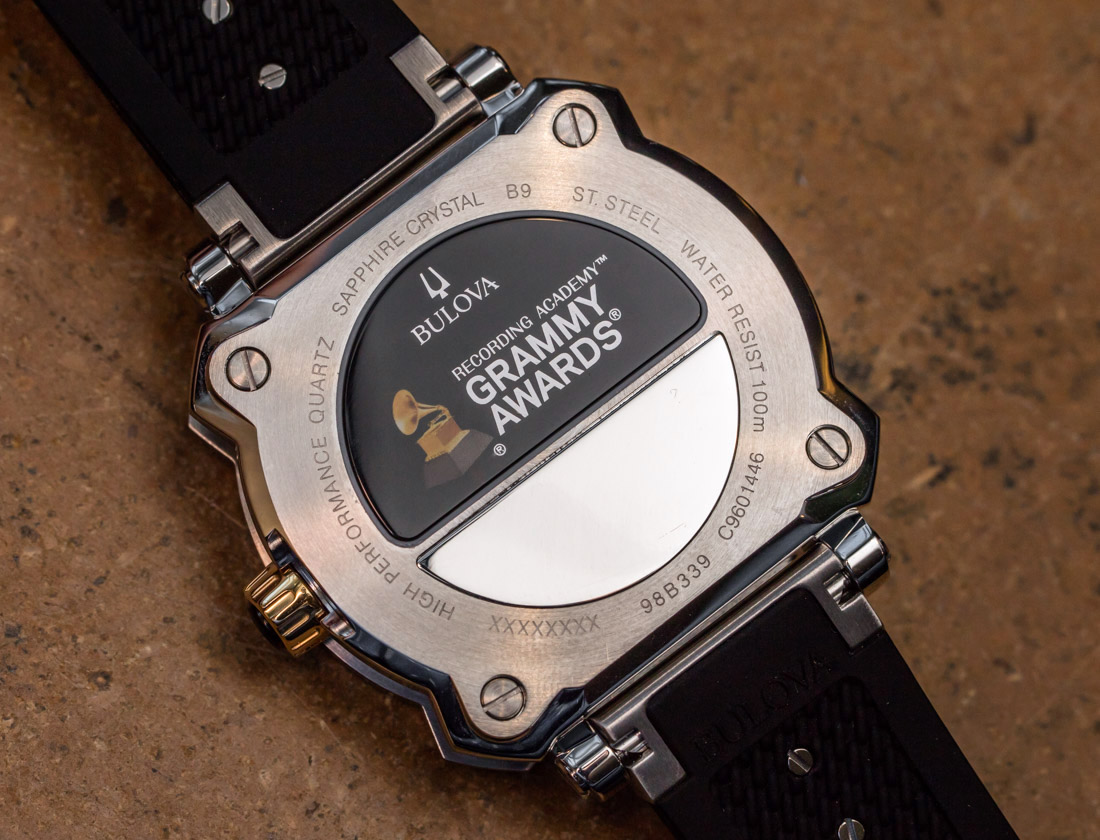 Under a sapphire crystal, the black dial has gold-toned hands and matching hour markers, and the watch contains Bulova’s proprietary Precisionist movement. The movement requires a separate discussion, but suffice it to say for now that there are three primary benefits. First, it is a quartz movement but has a mechanical watch-style sweeping seconds hand. Second, it operates much “faster” that traditional quartz movements at the 262 kHz rate — which translates into extremely good accuracy of within about ten seconds per year (compared to about ten seconds per month with traditional quartz movements). Finally, despite the higher power consumption, the Precisionist movement has a battery life of two years. 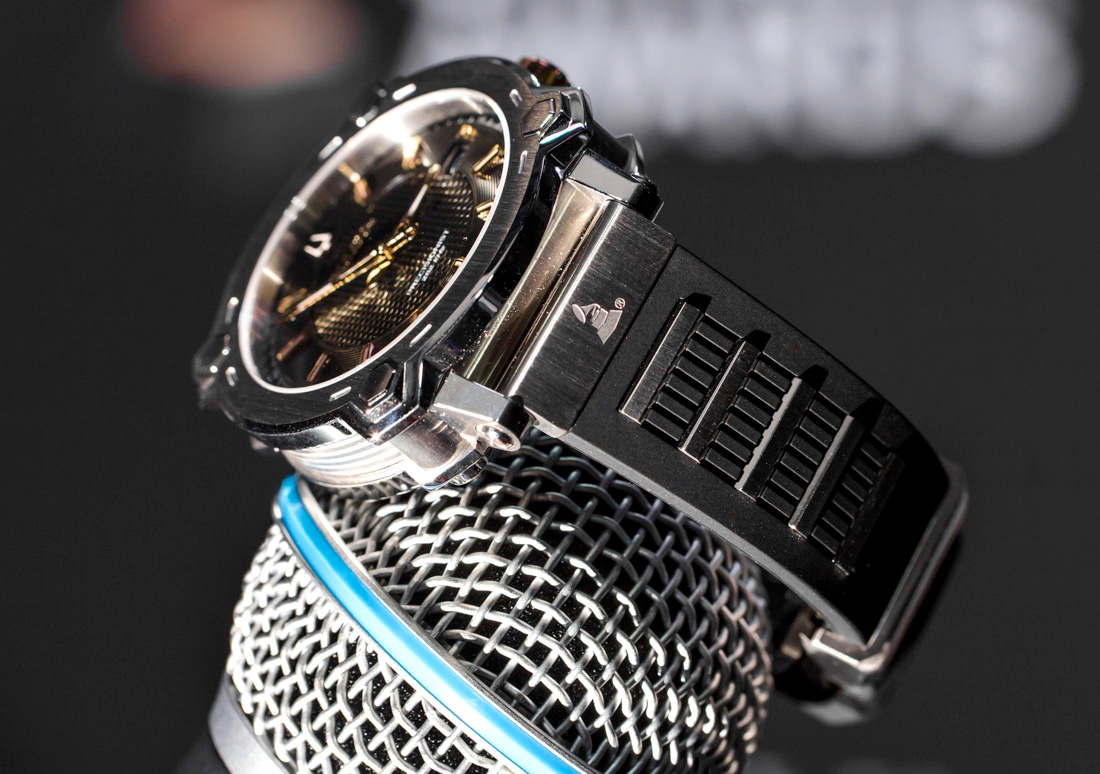 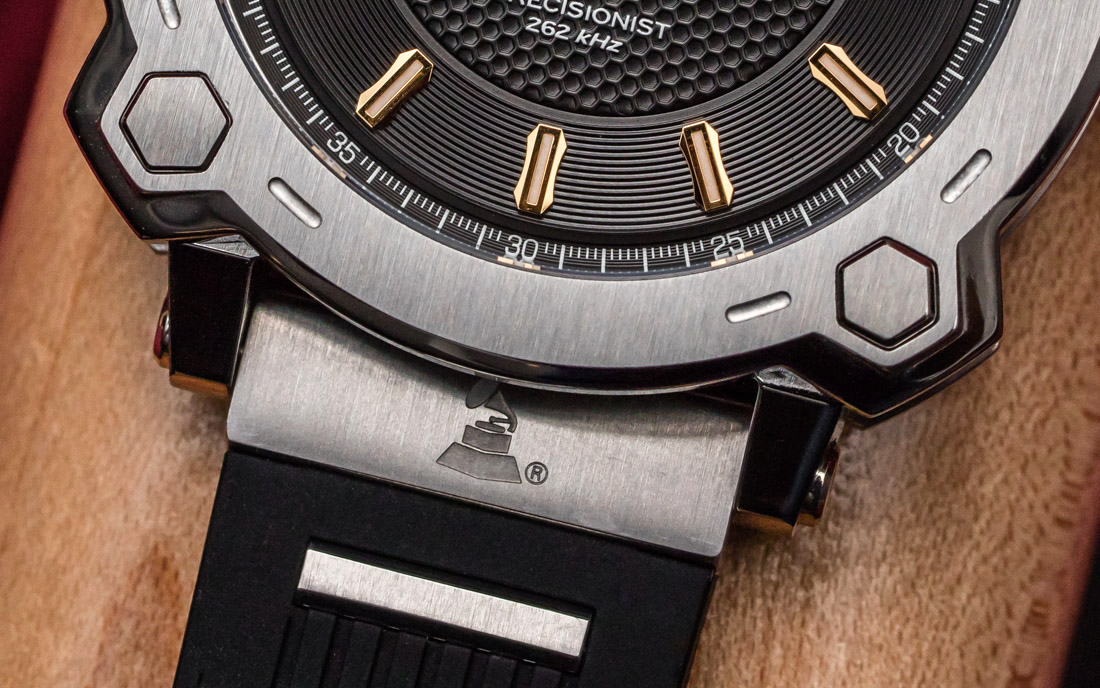 In addition to the caseback, the only place on the watch with the Recording Academy’s Victrola-style logo is the metal ends that cap the straps. This steel strap-end is a neat design element that does, indeed, up the feeling of value in the watch, and the subtle etching of the Grammy award logo is well done. That said, the strap, itself, is silicone and not rubber, as I’d expect at this price. It has solid-feeling deployant clasps, but the overall strap closing system feels bulkier than necessary for the design. I think Bulova should have gone with a folder instead of a deployant, in which the excess strap is hidden on the inside of the wrist. That would have made for a more elegant overall wearing experience. 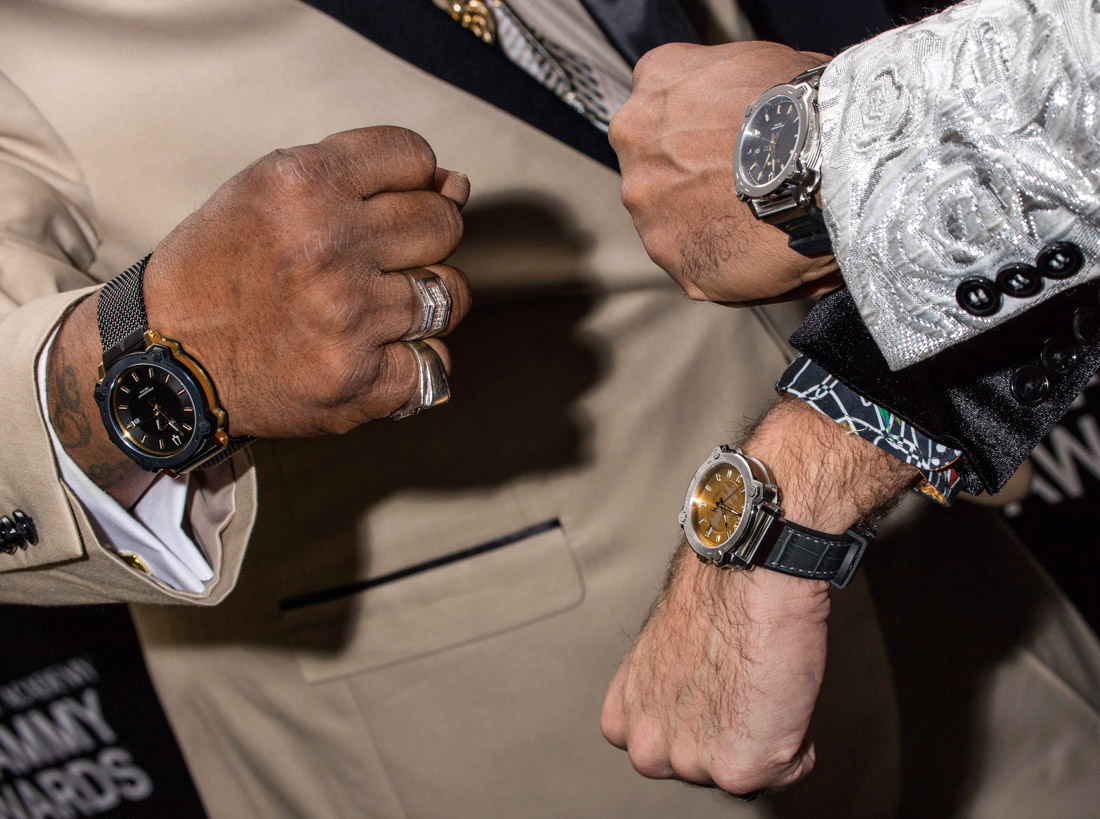 Spending time with Bulova at the Grammy Awards and adjacent activities, it was telling to see music industry personalities wearing this and other versions of the Bulova Precisionist Special Grammy Awards Edition watch. In musical art, as is the case in other performance art, looking and sounding different from others are major plusses, from a fashion and artistic perspective. For that reason, I think the interesting look of the former Percheron case is a good fit for the Grammy Awards and music theme. Let me remind you that this is the Grammy Awards watch model du jour and that, in a few years, Bulova will likely introduce another model to serve as the base of the brand’s impressive Grammy Awards and Recording Academy relationship. 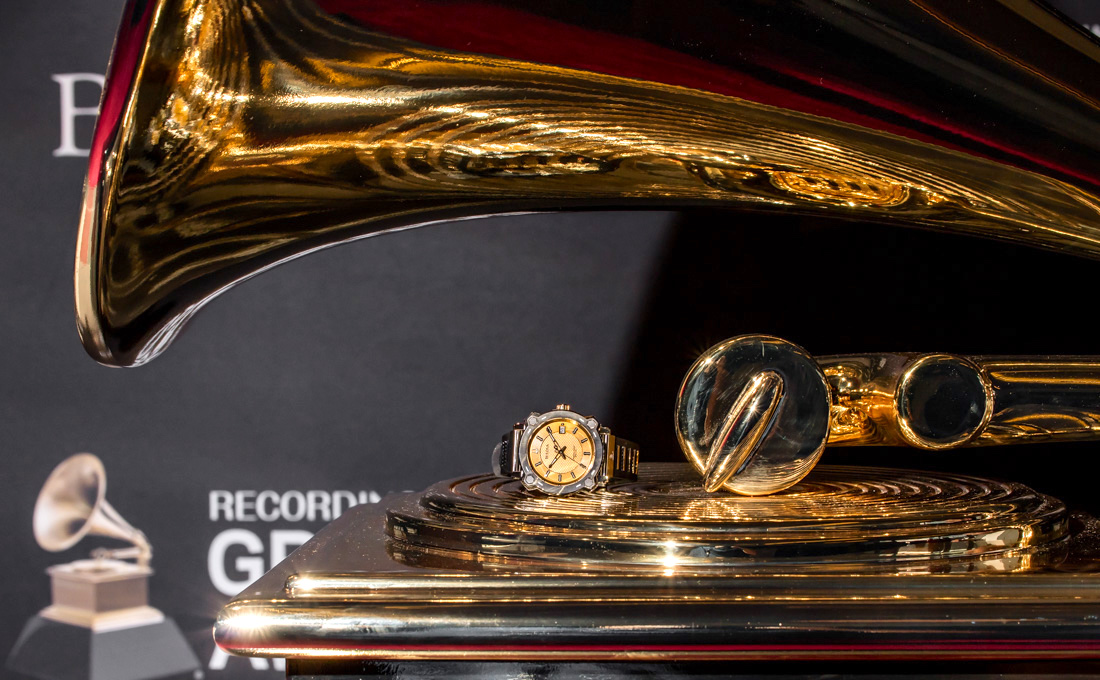 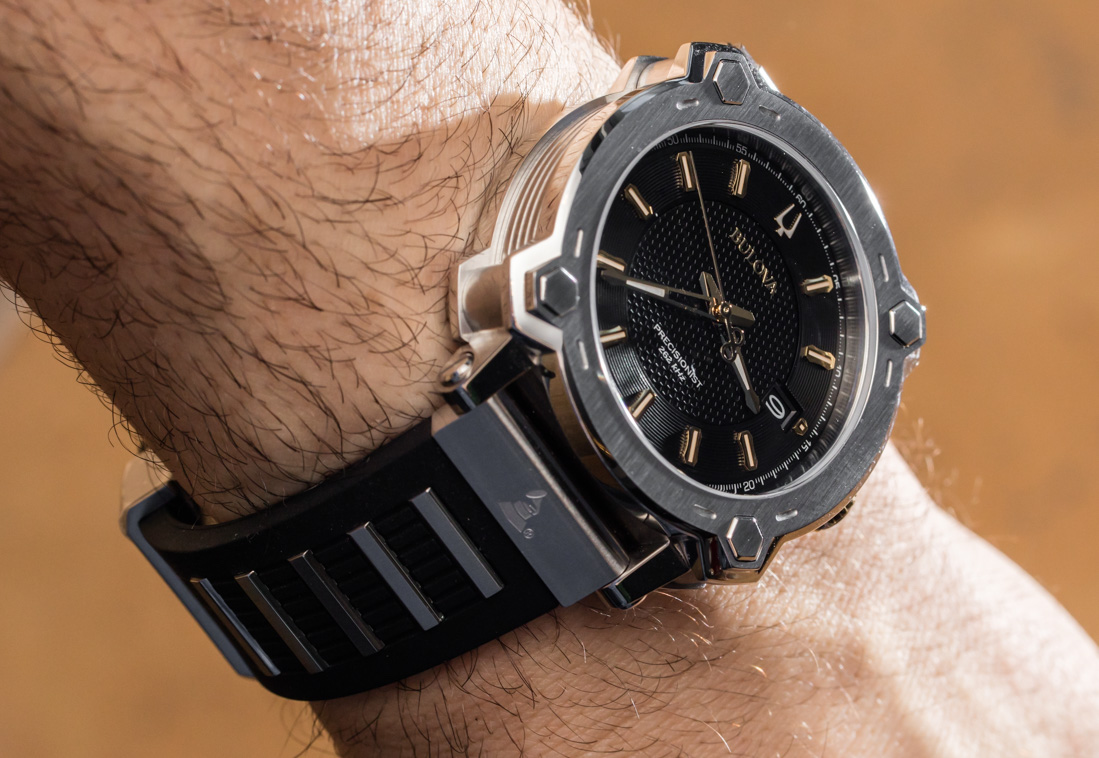 Bulova (like most watch brands) is no longer in the business of producing tool watches for people who strictly need to tell the time. Bulova’s efforts are in combining its adeptness and history (of firsts) of timepiece-making with modern themes in order to make relevant and emotional products for consumers. That’s a lot more like making jewelry than making a utility item — but in reality, Bulova needs to create products that are good at both. Merely having a relationship with the Grammy Awards would not be enough without a steady stream of interesting and unique products that celebrate that relationship. Bulova seems to inherently understand that, which makes me feel very confident that the world of music recording and Bulova will continue to get along nicely.