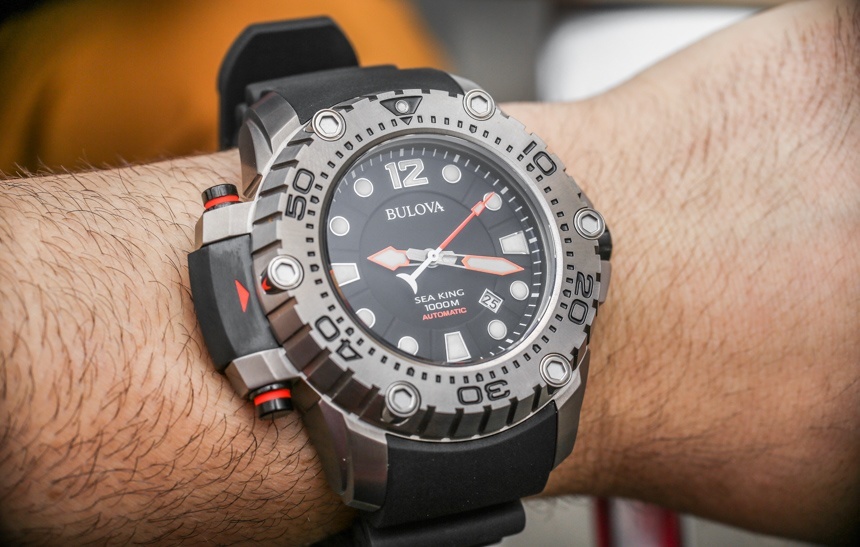 Bulova saw more strong new watch offerings for Baselworld 2015 – with attractive designs and strong values. What I love about the “Bulova of today” is that in addition to its mainstream offerings, there are more and more products specifically designed for the watch aficionado, such as this limited edition version of the new Bulova Sea King – which feels like a less expensive alternative to the Omega Seamaster Ploprof watch. So let’s check out this circa $1,500 mechanical 1000-meter diver new from Bulova for 2015. 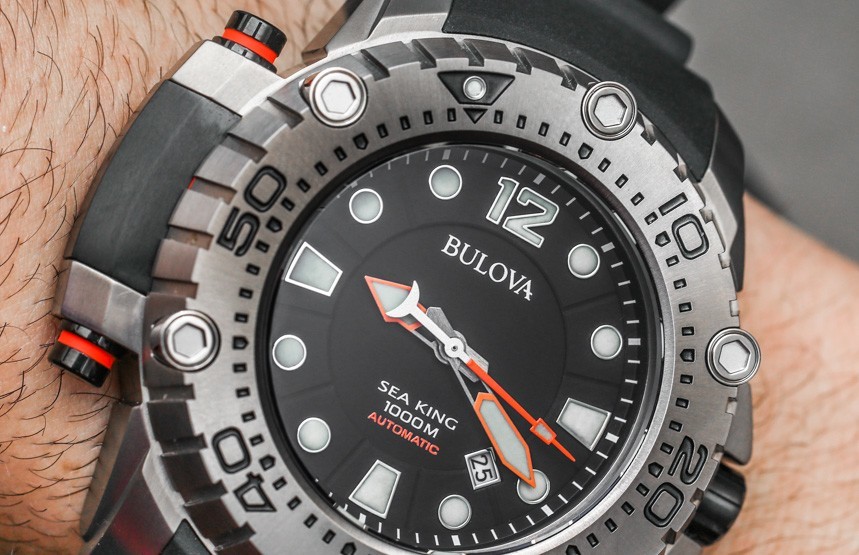 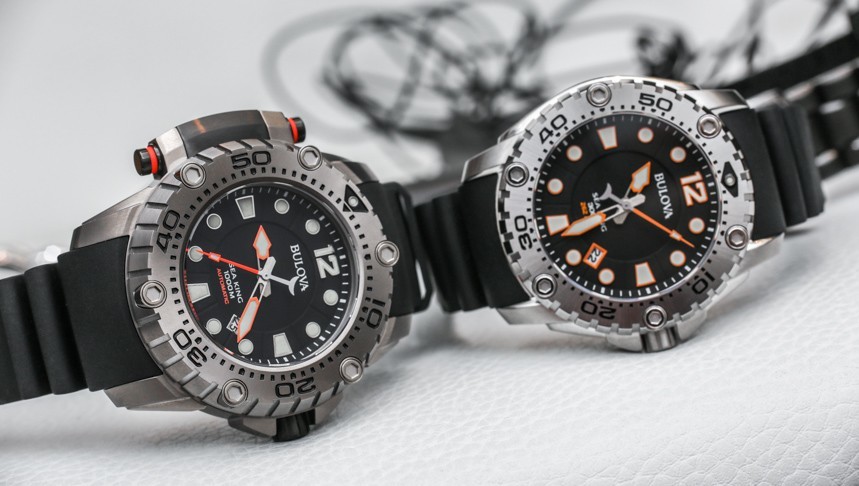 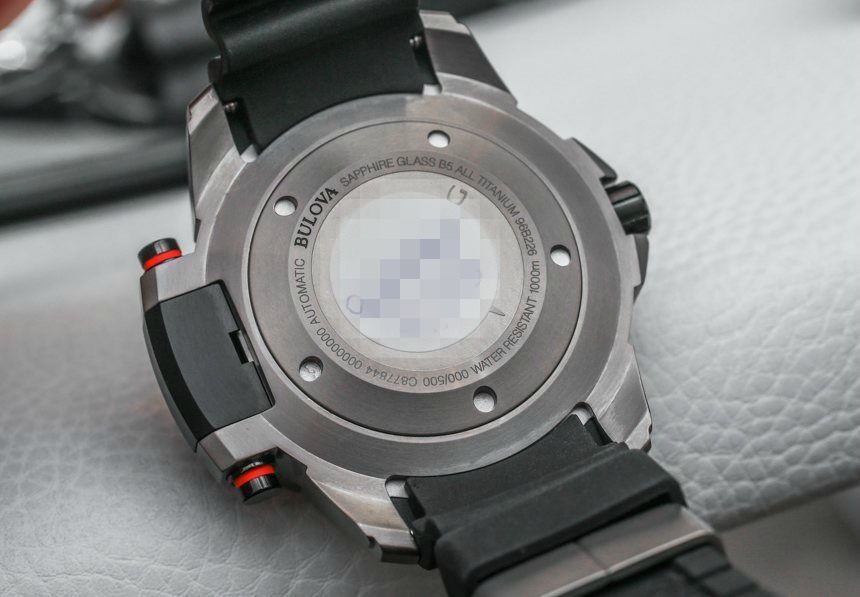 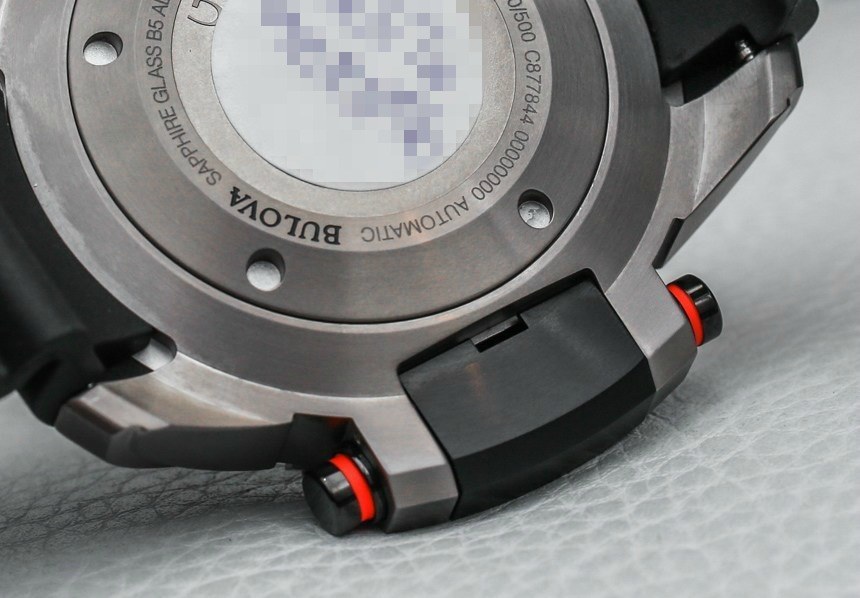 Inside the watch is a Japanese Miyota automatic movement which isn’t fancy but should serve as a decent workhorse movement for sport purposes. The movement is a “customized” Miyota caliber 8215 automatic that apparently has some additional anti-shock proprieties. I am not exactly sure why Bulova did not opt for the newer 9000 family of mechanical movements from Miyota – which feel like a natural fit for the Bulova Sea King Automatic. The 8215 movement offers the time with date, and the dial is painted with a lot of lume on the applied hour markers and large hands. Bulova created a legible, sporty, and high-end looking dial for the Bulova Sea King collection which should satisfy most diving enthusiasts as well desk divers. There is also a modern design to the Bulova Sea King dial and case that I enjoy in addition to all the retro divers out there. 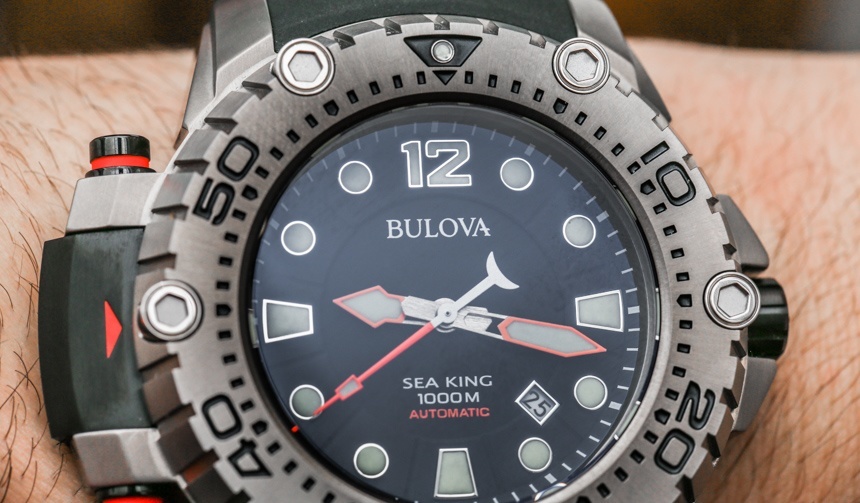 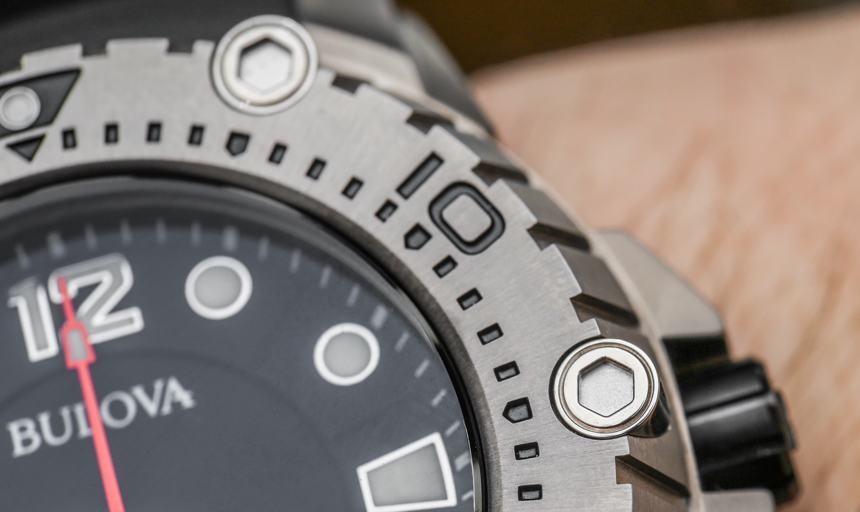 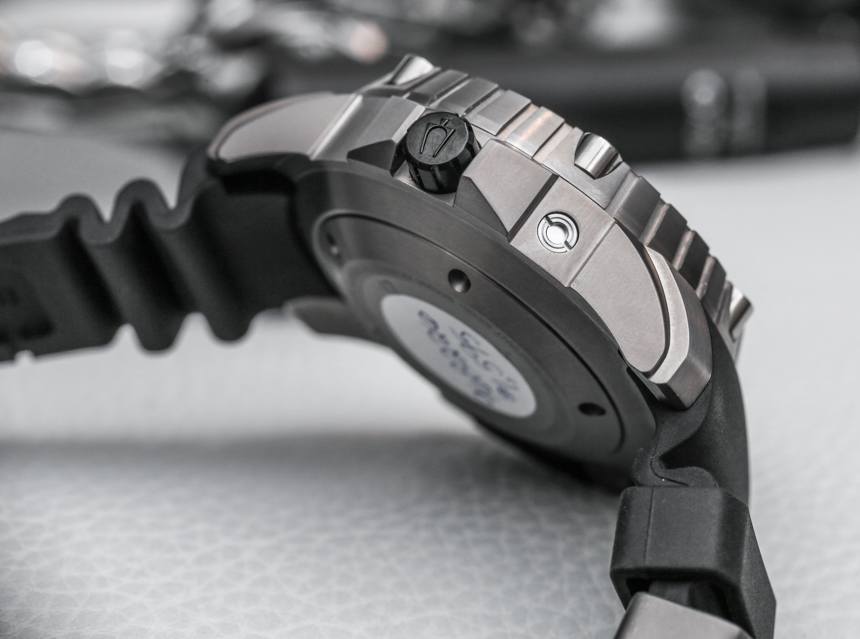 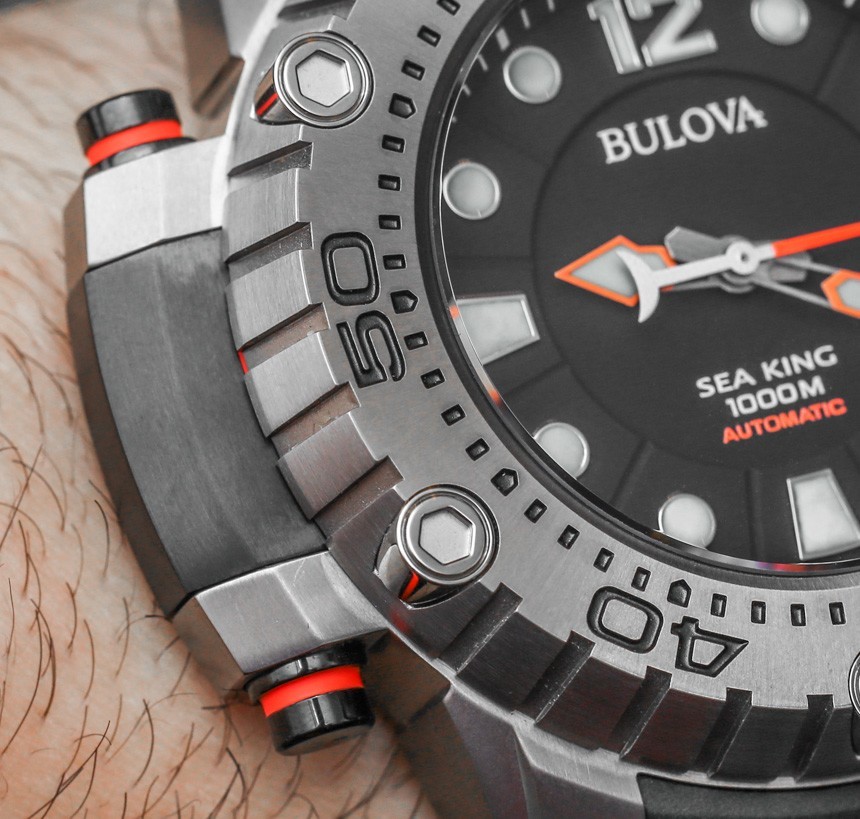 When pressing both the top and bottom pushers on the locking mechanism protruding from the left-side of the case, the middle part of the mechanism shoots out, unlocking the bezel which can then be turned in one direction. Press the middle section back in and it clicks into place, locking the bezel. Its a fun little system and adds enthusiast flavor the Bulova Sea King Automatic 96B226 watch. The case also has an automatic helium release valve.

Speaking with Bulova’s CEO Greg Thumm about the Bulova Sea King Automatic limited edition, it was clear that producing the watch was a labor of love by one dive watch lover for other dive watch lovers. Clearly, very few people actually have use for a helium release valve or a locking mechanism for their rotating bezel. Today, diving enthusiasts who do wear dive watches do so for an added sense of fun and enjoyment when underwater but they mostly rely on diving computers to get the information that they need. Nevertheless, a lot of watch lovers continue to be captivated by what diving watches represent and their important position in the larger world of sport watches. 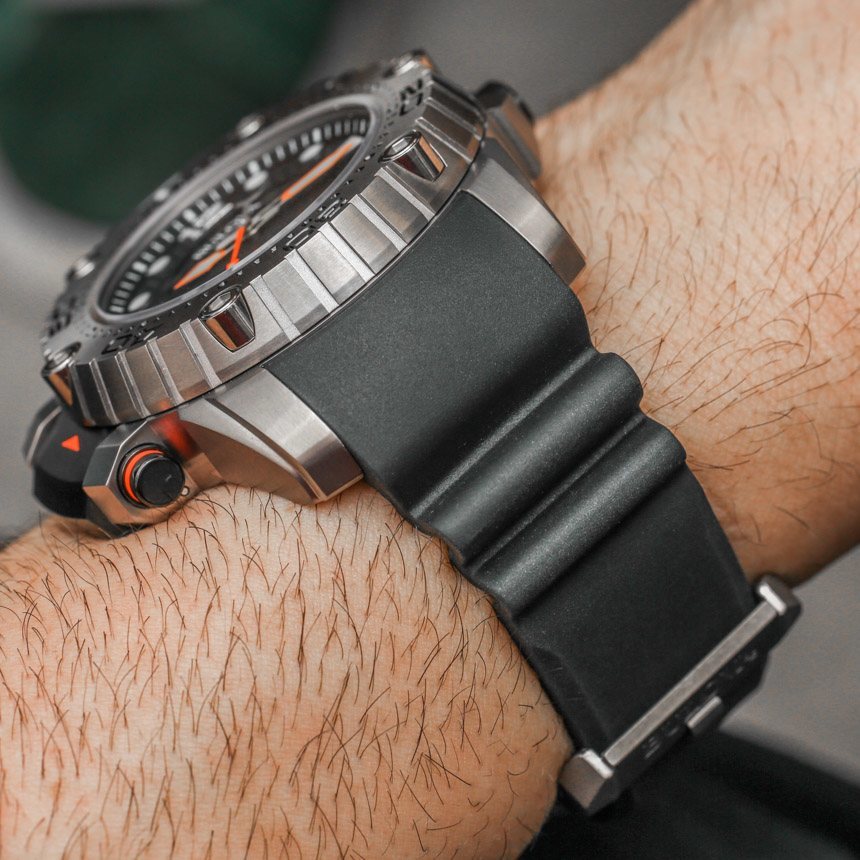 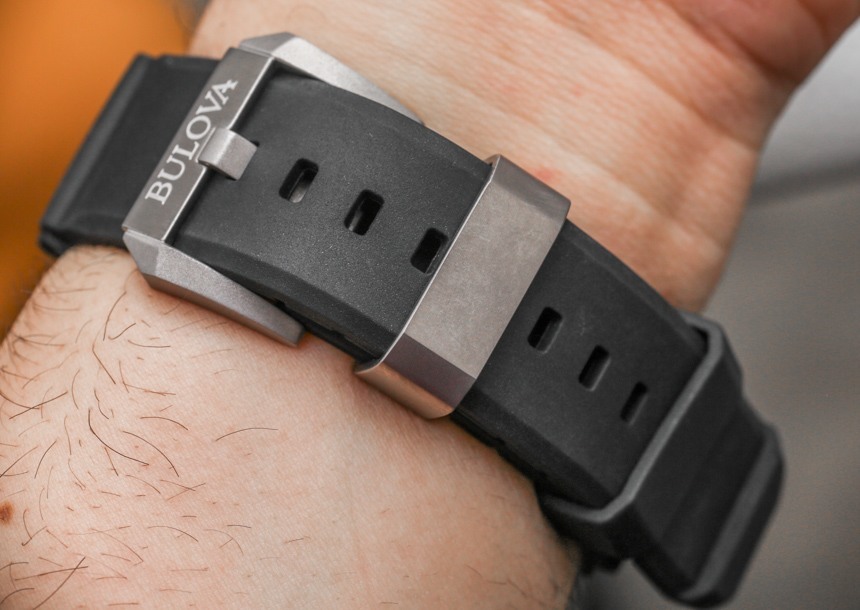 Despite its large size the Bulova Sea King Automatic isn’t too heavy, given the titanium case, and it wears comfortable on the strap. Bulova includes an extension strap making it easy to put the watch over a diving suit. The case uses an AR-coated sapphire crystal over the dial which helps a lot with legibility. The timepiece very much looks as though it is ready and eager to submerge to depths of 1000 meters, even though anyone taking one down that deep is unlikely, to say the least. Though, I will say that the best diving watches are those which look to be perpetually ready for action. 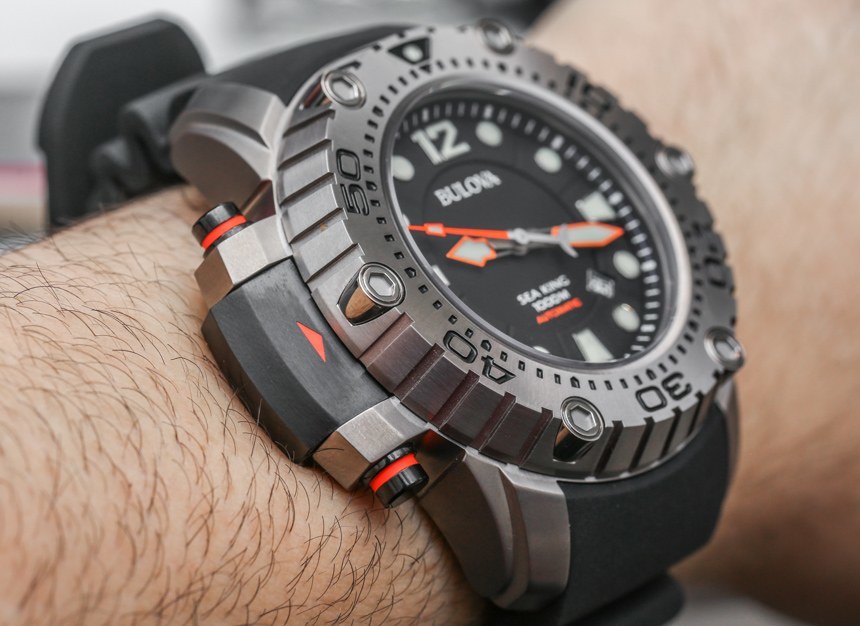 Bulova will continue to release limited edition or limited production sport and enthusiast watches for collectors in addition to their larger collections – something which really does add a lot to the brand’s persona with serious timepiece fans. I think this is what happens when you have a brand run by a real watch guy versus someone who enters the watch industry from another business and is mostly concerned about numbers and growth.

The Bulova Sea King Automatic 96B226 watch will be produced as a limited edition of 500 pieces with a very fair price of $1,595. bulova.com