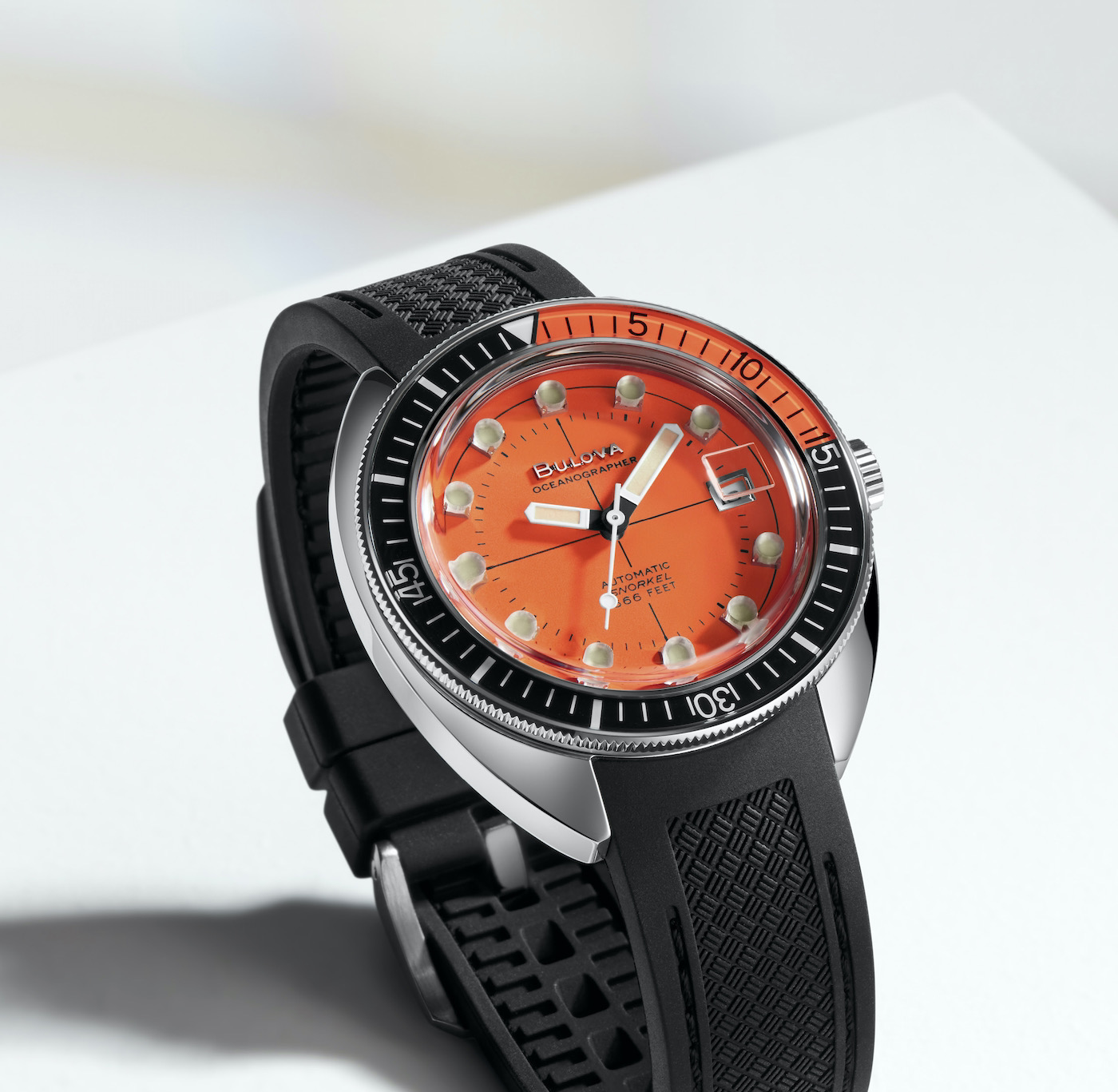 Bulova Summons The Devil Diver Back From The Archives

16 Comments
by SponsoredPost
Sponsored post presented on aBlogtoWatch by advertiser

The 1960s was the golden age of SCUBA diving, and watch brands across the world were quick to release watches suitable for professional and recreational divers, alike. Bulova, which can trace its roots to 1875, was right in the thick of it. In 1961, just as the sport of SCUBA diving was beginning to grow in popularity, Bulova released its first dive watch. Keep in mind, at this point, the deepest dive attempted had been 133m — a record set by Ennio Falco two years prior — and only the most serious dive watches were rated to 200m. 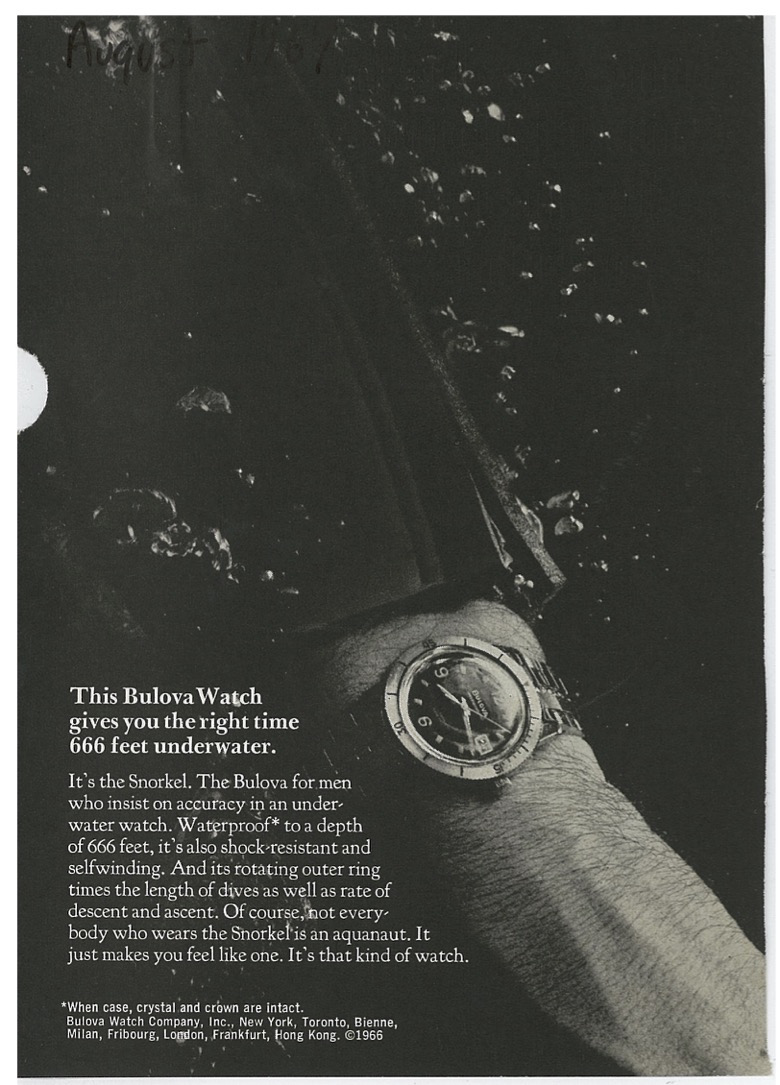 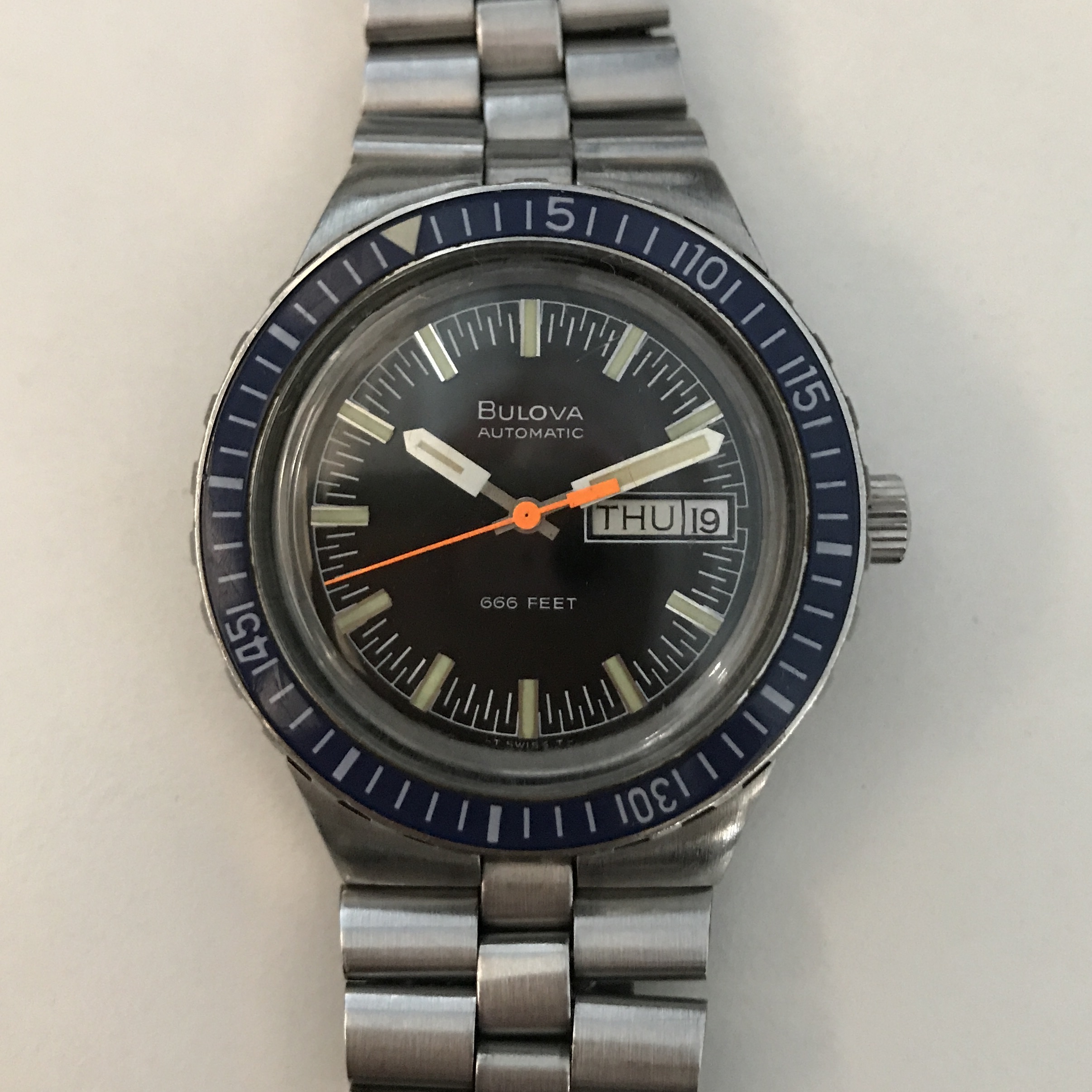 In line with other brands at the time, Bulova adopted a compressor case (a clever design whereby the seals tighten as water pressure increases) supplied by the Swiss company Ervin Piquerez SA. A standard compressor case at the time was rated to 200m, but Bulova wanted its watches to go just a touch deeper. This case design set a new record in water resistance at 203m, but in a plucky, and slightly mischievous move, the brand chose to adorn the dial with the imperial measurement of 666ft. Thus was born the Devil Diver. 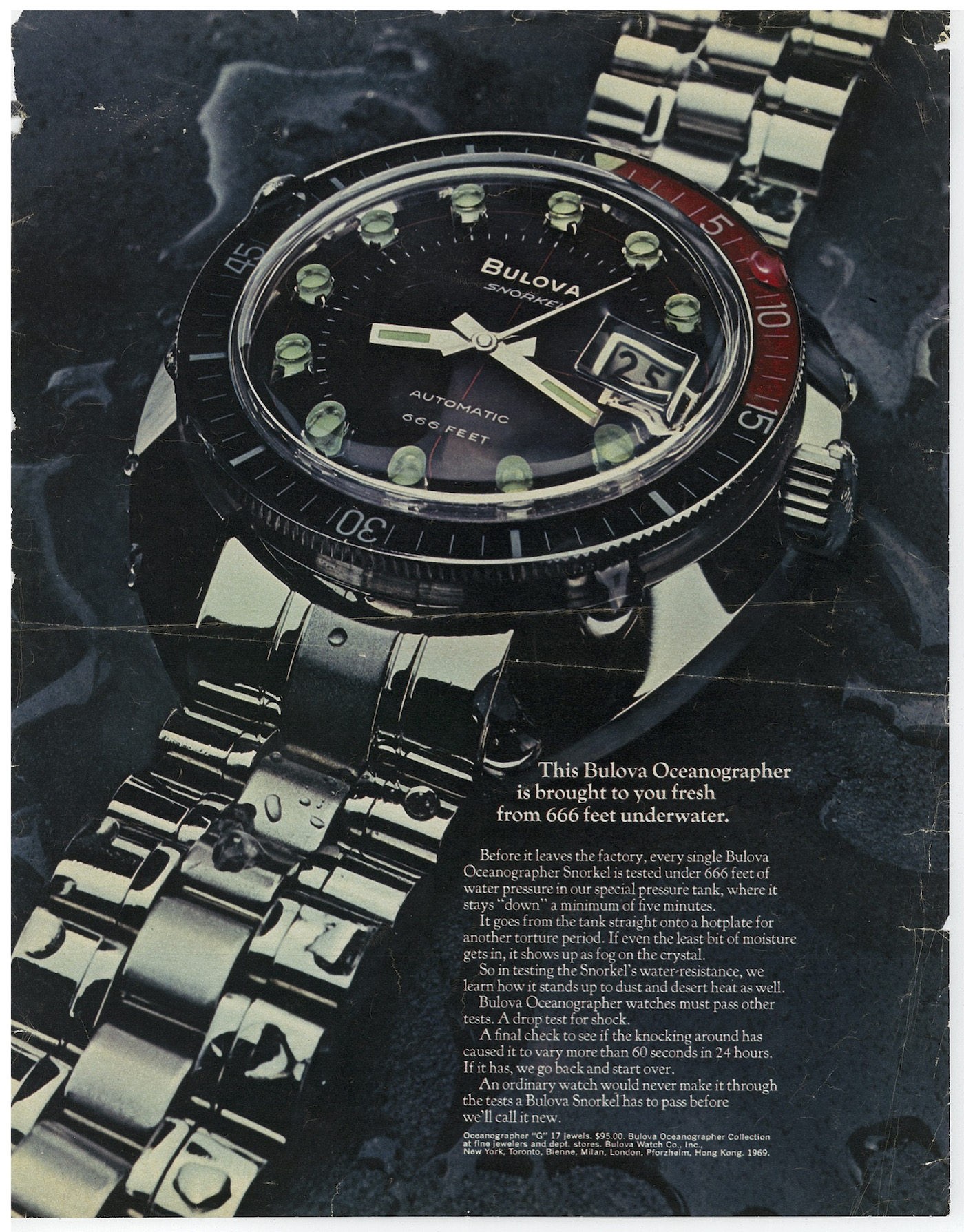 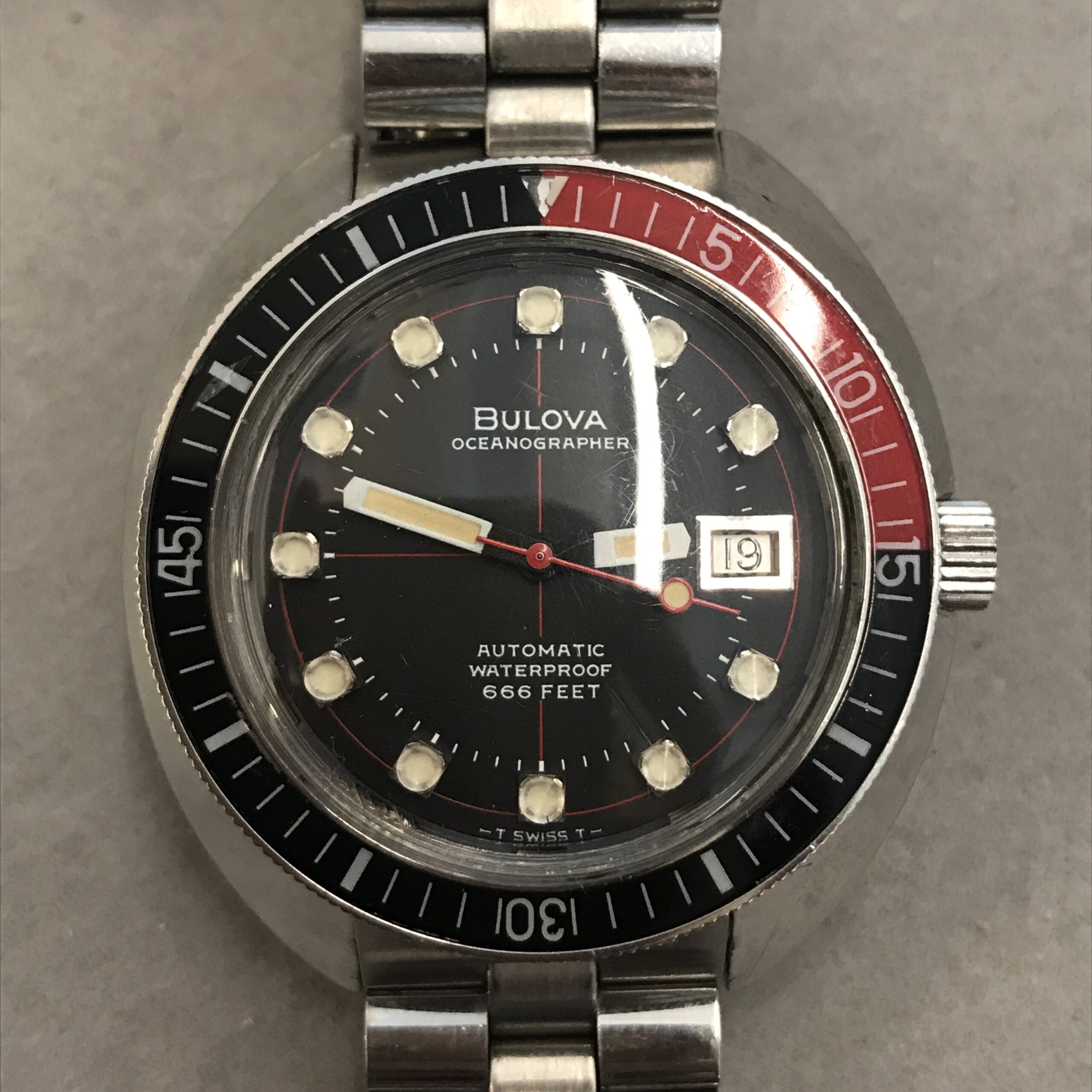 Over the next two decades, Bulova continued to produce Devil Divers, but unlike many of its more stoic Swiss competitors, Bulova embraced the fun and exuberance of watersports. Names like the Deep Sea, Snorkel, Surfboard, and Oceanographer were found on the dials of Bulova dive watches. Bulova fully recognized, and even embraced, the fact that few of their watches would ever be employed in pelagic pursuits. Some ads from the 1970s even proudly proclaimed “Not everybody who wears the Snorkel is an aquanaut. It just makes you feel like one. It’s that kind of a watch.” 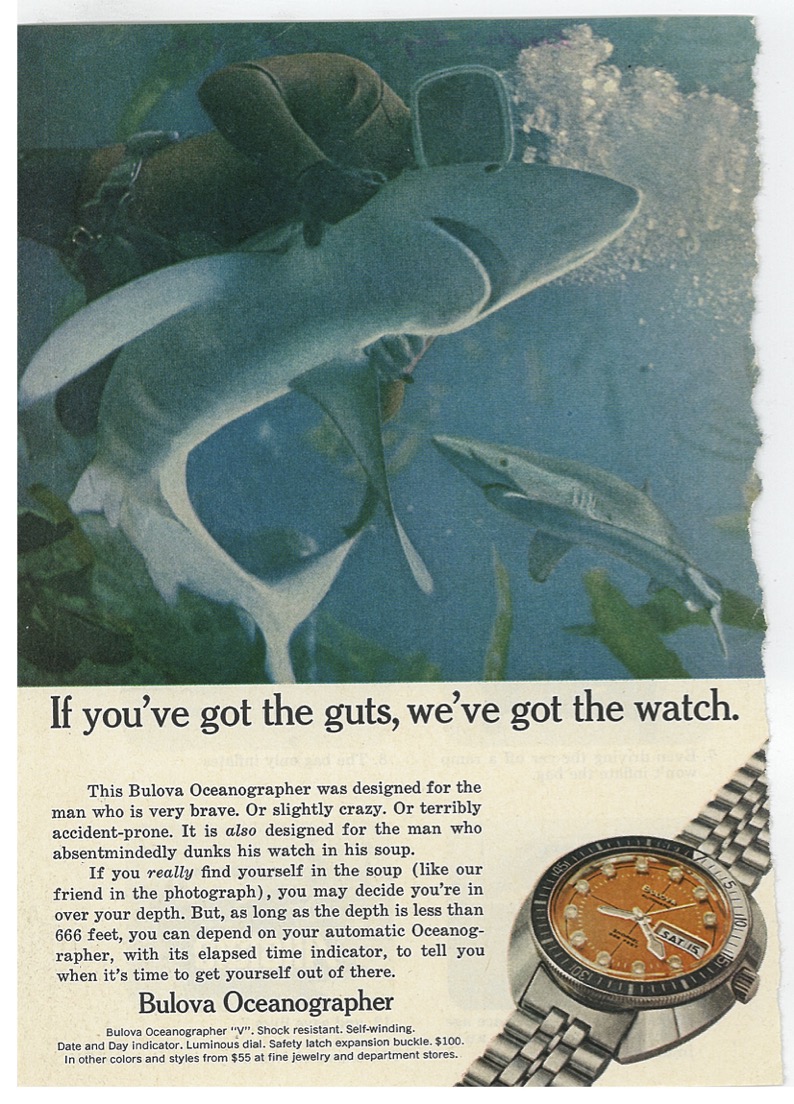 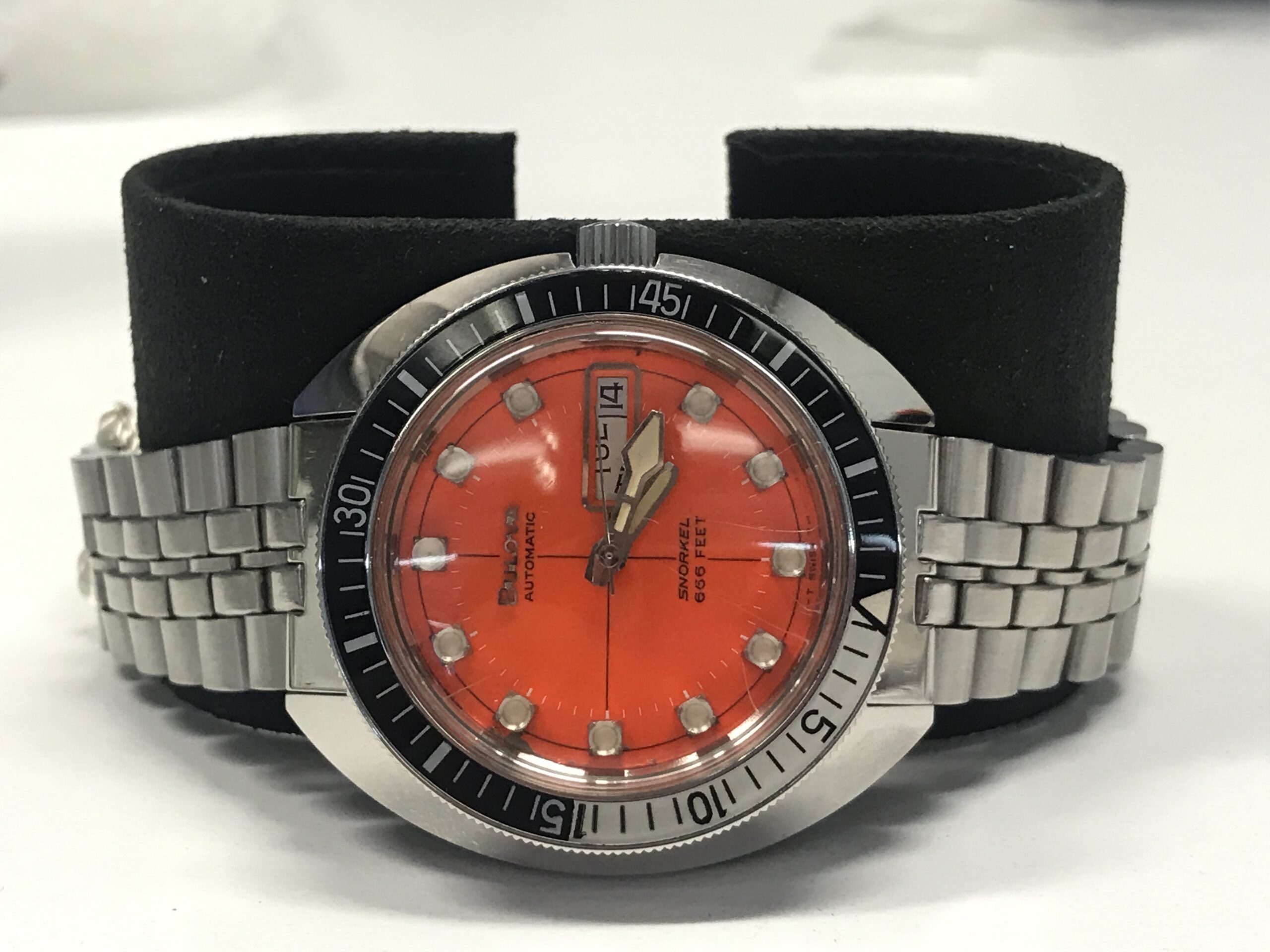 If there’s one watch that epitomizes Bulova’s playful take on the dive watch, it was the 1972 Oceanographer. Equipped with a wide cushion case and a striking orange dial with crosshairs, this Oceanographer quickly became the Bulova Devil Diver and has been adored ever since. Bulova originally resurrected the Devil Diver in 2018 as a modern (and upsized) reissue. Now, with the release of the newest iteration of the Devil Diver, Bulova recaptures both the size and spirit of the original 1972 Oceanographer, retaining all the design clues — including the signature orange dial — but delivering the watch with truly modern specifications in a compact case. 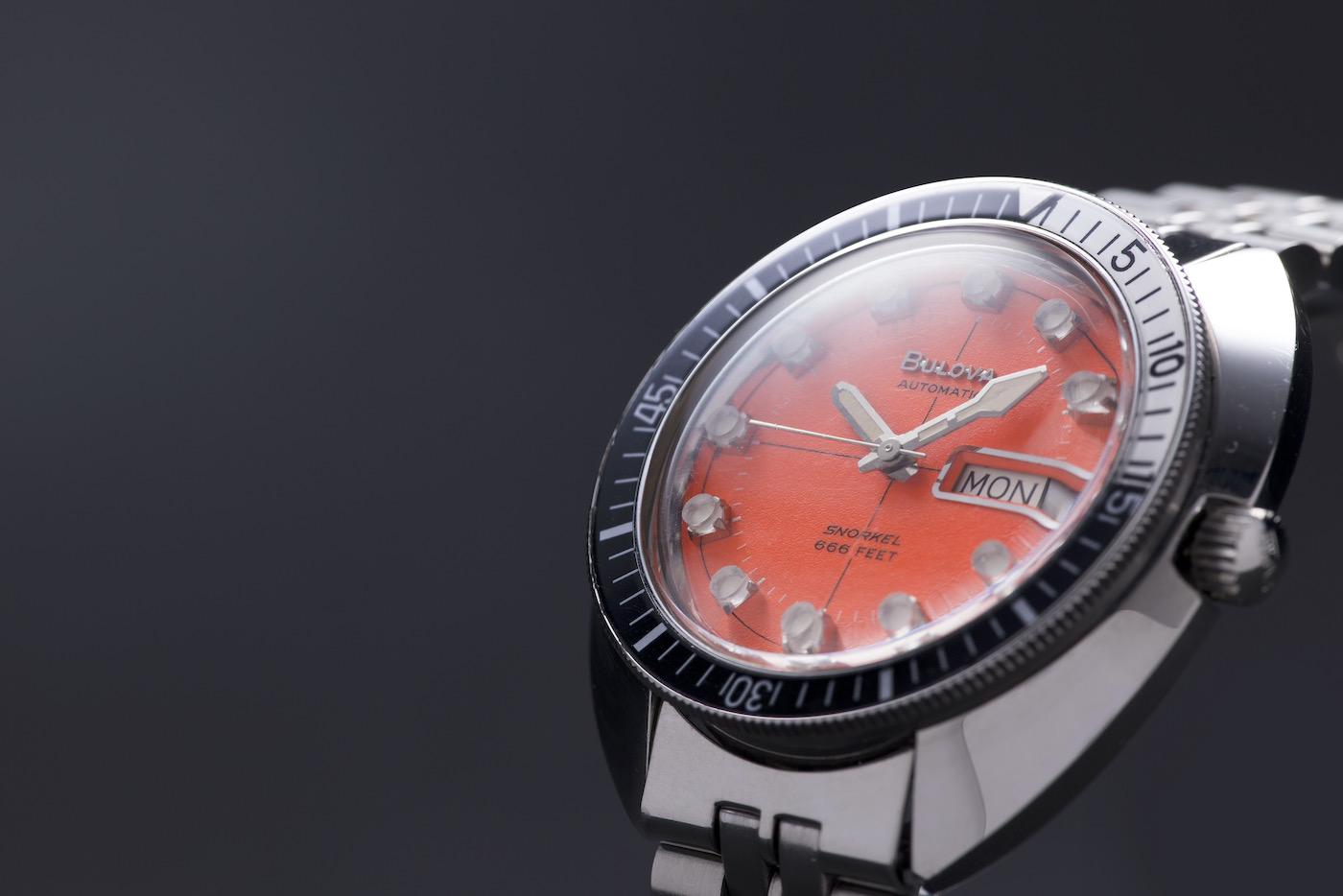 True to the original case size of 41mm, this new release will be a welcome addition to those who appreciate not just the vintage styling of the 1970s, but also vintage sizing. The stainless steel cushion case is topped by a box sapphire crystal, evoking the charm of Plexiglas with the scratch resistance of sapphire. The short lugs and cushion case make the watch suitable for a wide range of wrist sizes, while the fitted black rubber strap is supple and modern, but the texturing echoes tropic straps of the past, giving you the best of both new and old. 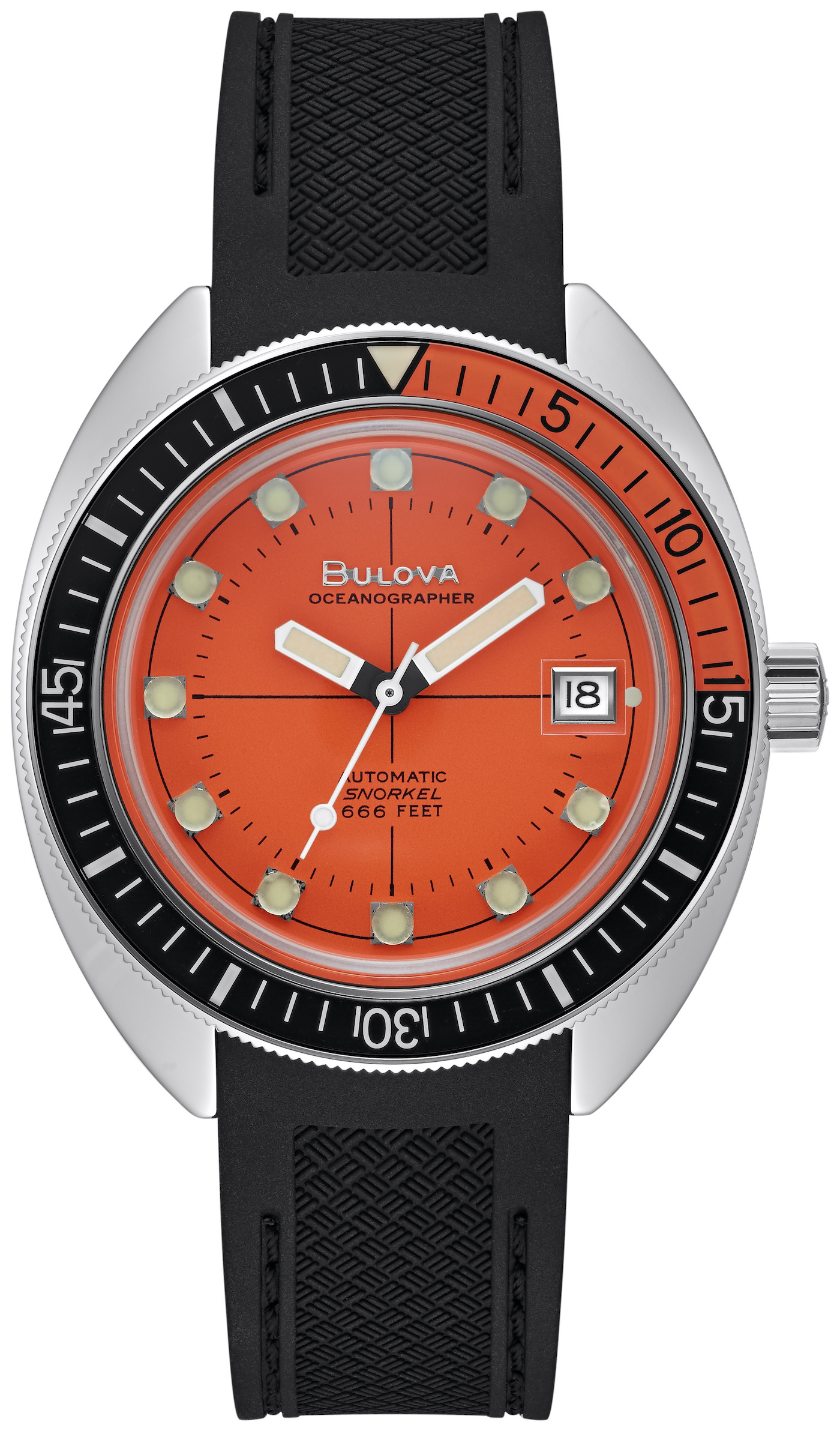 While the case shape is charming, it’s the dial that steals the show. The orange dial, paired with the orange and black rotating bezel, is bright and playful — perfect for a day at the beach, no matter if that day involves some serious diving or a bit of body surfing by the shoreline. The hands and hour markers are filled with luminous material for low-light visibility, but make sure to take a close look at those applied indices. Consistent with the original Devil Diver from 1972, the new release replicates the transparent, lume-filled cylinders used for hour markers. Finishing off the dial is the same, now-iconic depth rating of 666ft. 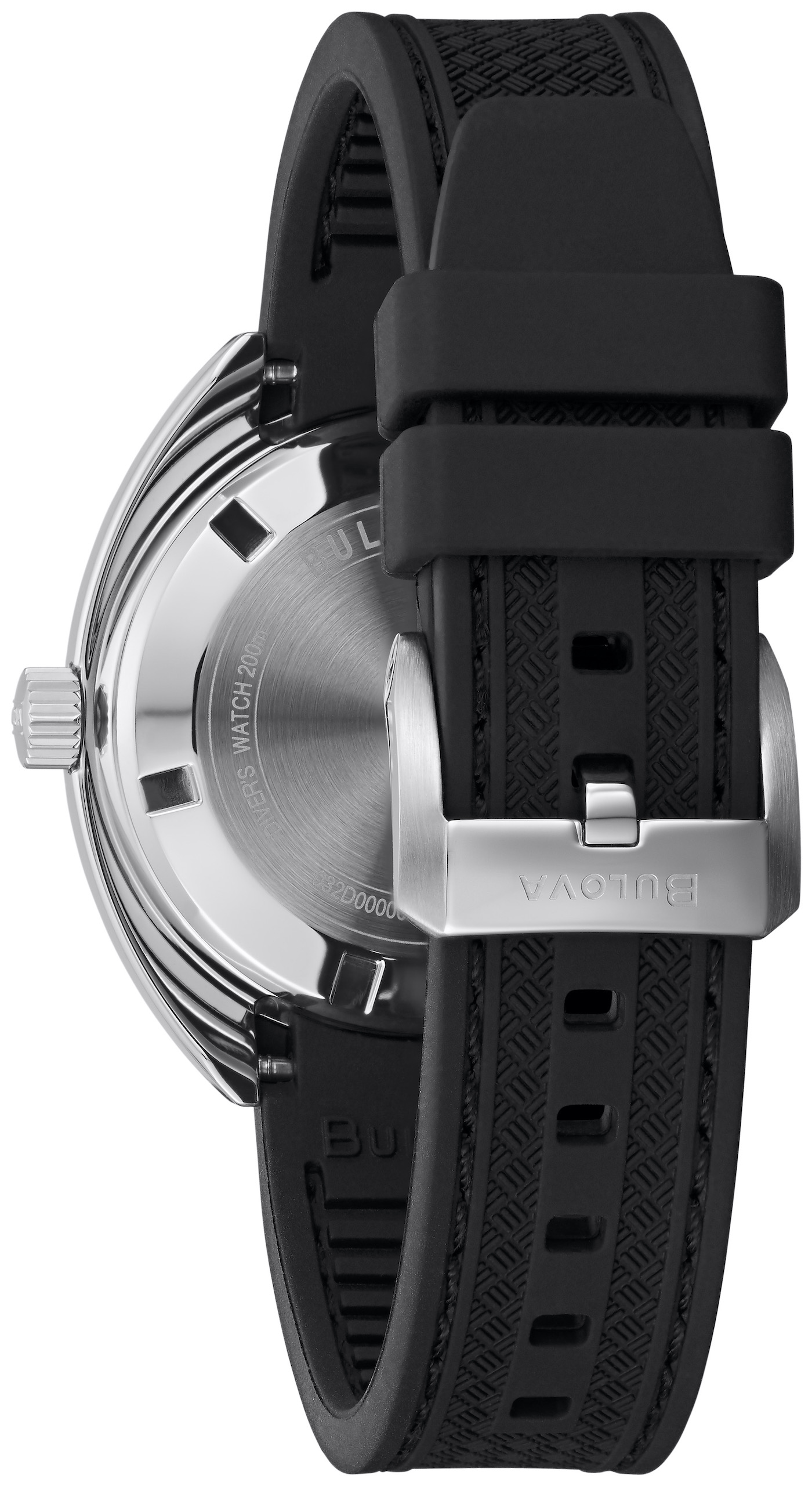 Powering the new Devil Diver is the Miyota 821D automatic movement. This tried-and-tested movement features 21 jewels, beats at 21.6kbph, and features a 42-hour power reserve. Simply put, it’s a workhorse movement that won’t let you down. 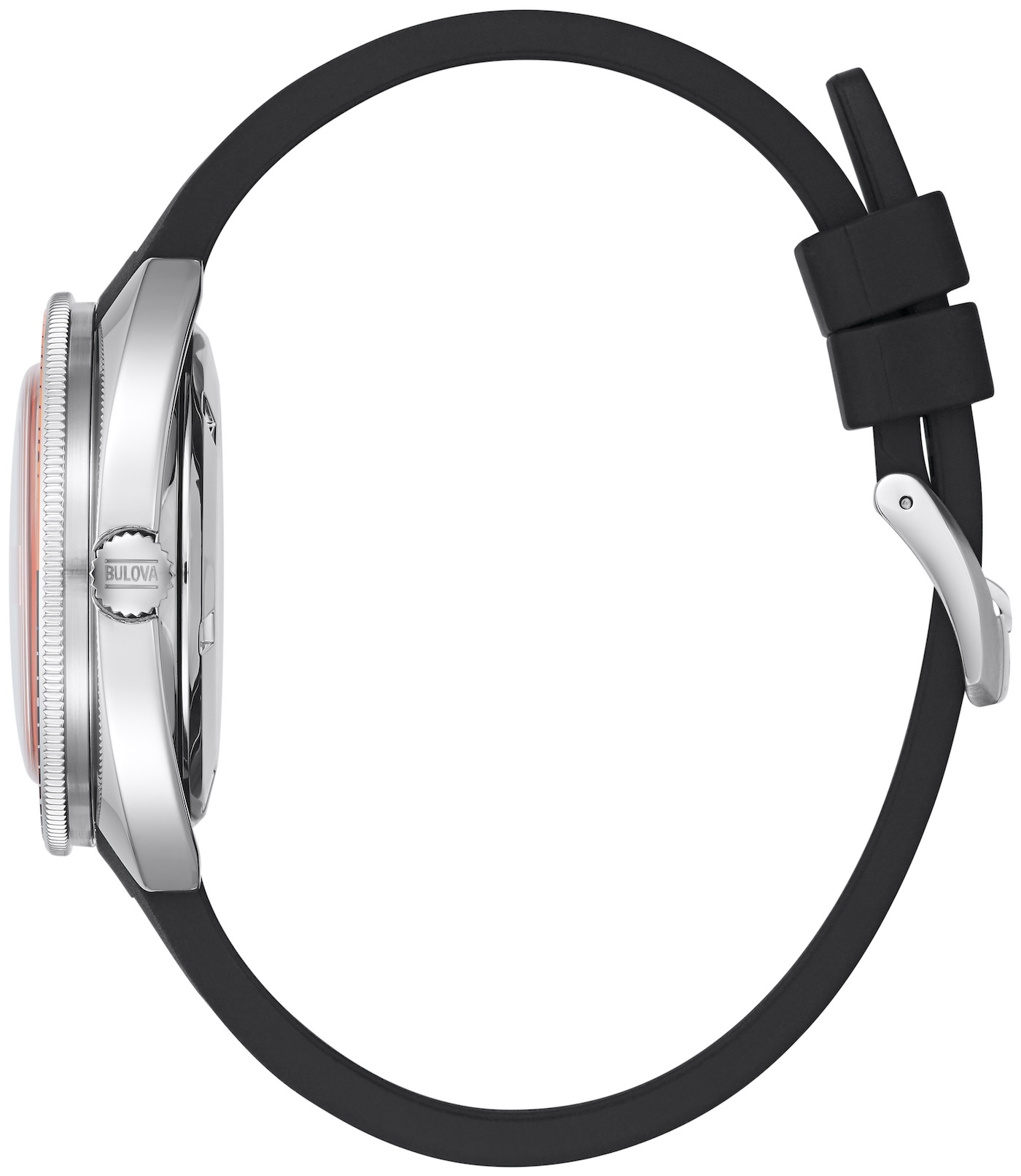 If you’re looking to let loose this summer with a watch that channels the exuberance of the 1970s beach culture, the Bulova Devil Diver has you covered. Available now for $750 USD. Be sure to visit bulova.com for more information.