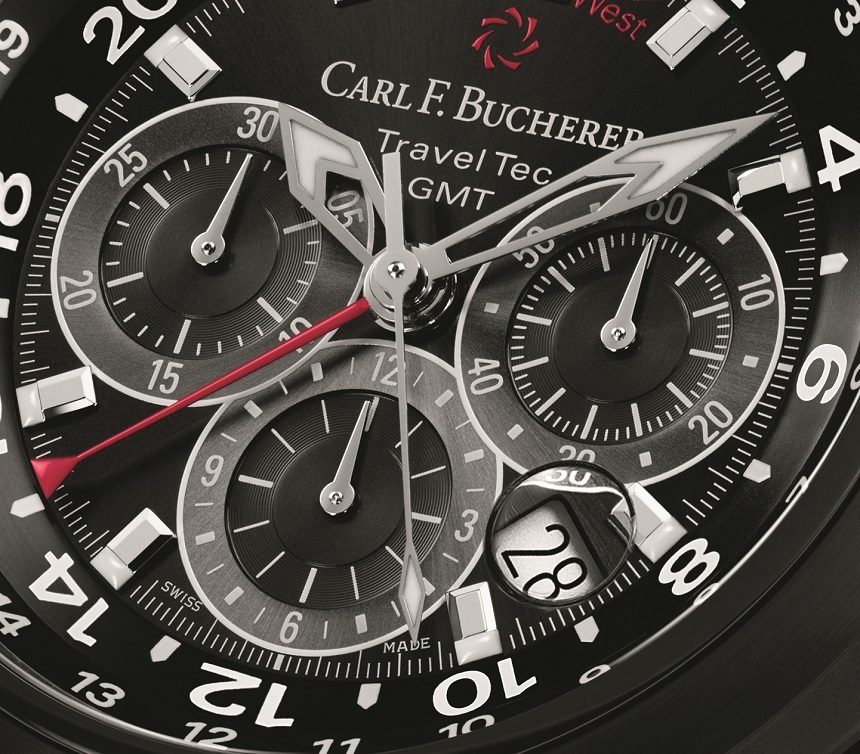 How you respond to the release of the Carl F. Bucherer Patravi TravelTec watch in black DLC will probably depend on your thoughts on the current options presented by the brand. Their choice to release a matte black DLC version of their Patravi TravelTec provides an interesting option to those who want something a little different from the stainless steel models and for those who, for whatever reason, don’t want to get a gold version either. It’s still edgy but also a more reserved (and affordable) alternative to the Patravi TravelTec GMT FourX (reviewed here), which is the skeletonized version. 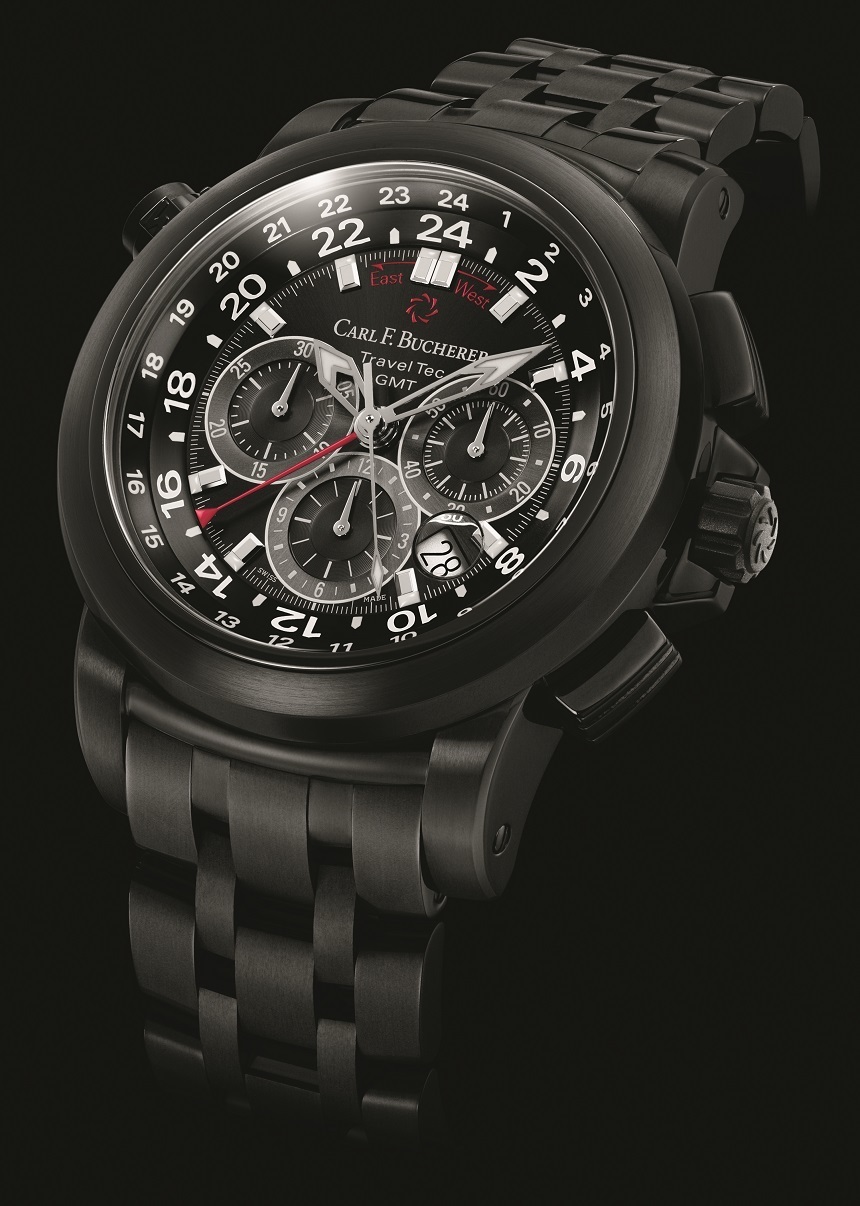 The name Carl F. Bucherer has been known to the watchmaking world since 1888. With familial origins in the city of Lucerne, this ancient Swiss maison has been attached to a newer incarnation that, since 2001, has focused on developing in-house movements. After years of research, the company succeeded in their goal to produce a Bucherer calibre with the launch of the CFB A1000 movement, powered by a peripheral rotor. This watch, however, still uses the modified ETA CFB 1901.1 movement found in the aforementioned Patravi TravelTec watches. 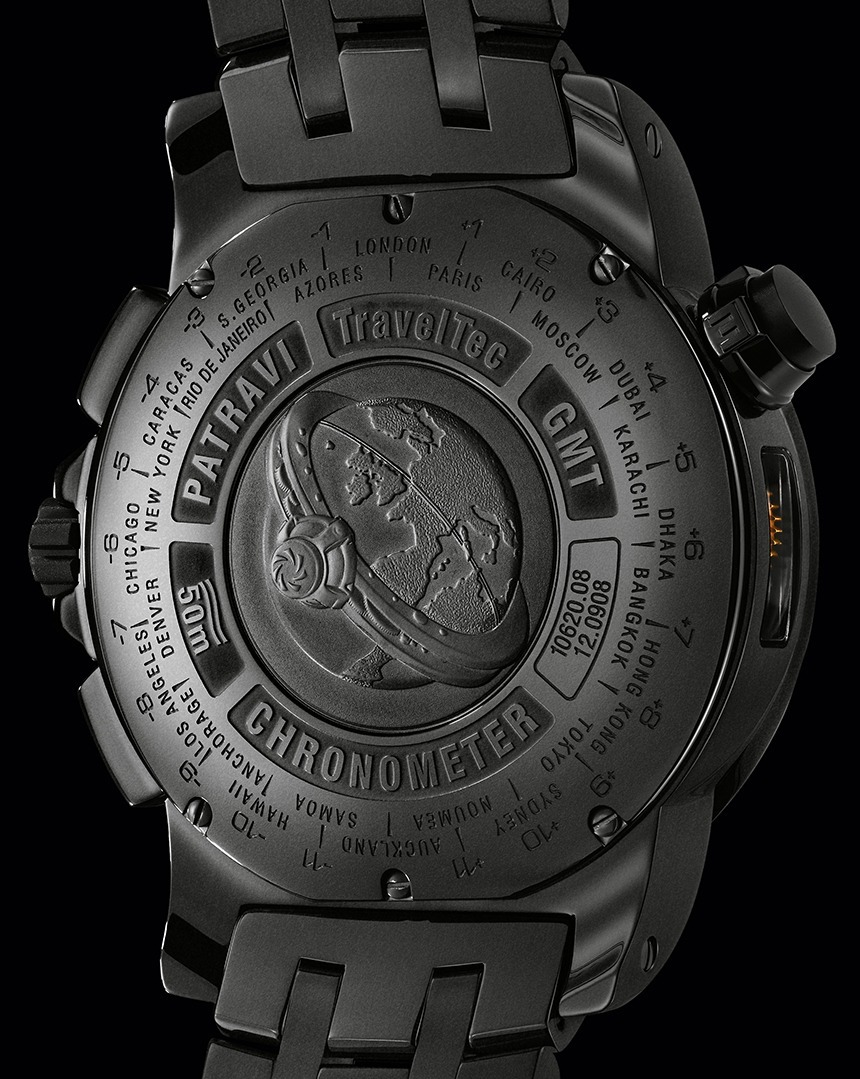 For those not familiar with the previous models of this watch, the first thing to mention about the Carl F. Bucherer Patravi TravelTec watch is its ability to display three time zones at once. This is more than just a simple GMT watch – the clever and clear dial display enables even the most regular roamer to keep up with time at home, abroad, and wherever in the world they may be. At first glance, it isn’t totally apparent how the watch indicates all three time zones, but thanks to the patented “monopusher” at ten o’clock, one of the two internal bezels can be advanced by hour increments in either an easterly or westerly direction to indicate the third time zone via the red 24-hour hand.

The second two time zones are both indicated by the red hand. You set the hand to line up with the corresponding time zone on the dial to read the second time zone, and then you set the rotating bezel to the third time zone and just ignore the dial position of the 24-hour hand to read it. It’s a brutally simple way to get two functions out of one hand, and it’s pretty simple to use. All it does is save you a momentary mental calculation, but the Carl F. Bucherer Patravi TravelTec does it with style and utilises new technology (the monopusher) in the process. 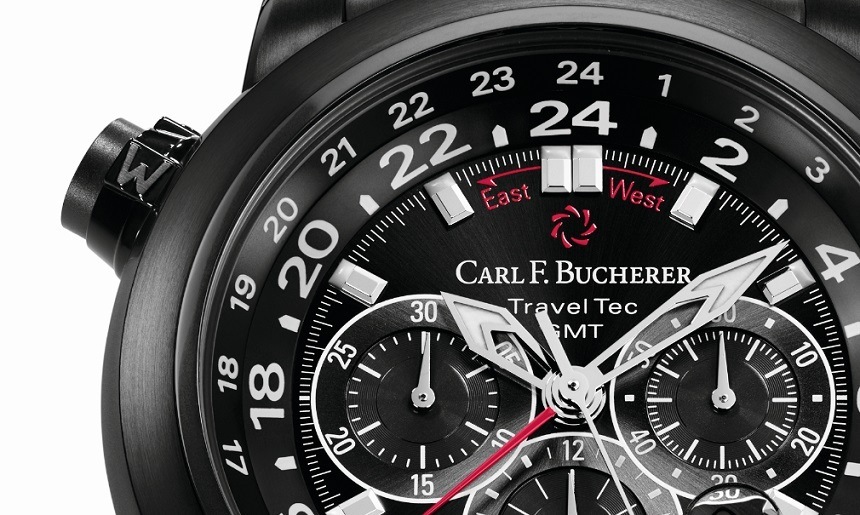 The case of the Carl F. Bucherer Patravi TravelTec is 46.6mm wide and 15.5mm thick. Simply put, it’s a big piece of kit. Being all black increases its presence on the wrist. Team those proportions and colour scheme with a chunky bracelet (also DLC-treated stainless steel), and you have a seriously imposing timepiece on your wrist. Despite this, the watch, like the rest in its family, is only water resistant to 50 meters.

Despite its brawn, this Carl F. Bucherer Patravi TravelTec watch is probably more lovable for its brainy side. The dial is easy to use, but is certainly busy. Here, the extra internal bezel does clutter things a bit, but the font is wisely basic and the different dial elements well spaced. The red accents (on the “east” and “west” markers at 12, and on the 24-hour hand) are welcome. They break up the relentless pairing of black and white nicely. The shape of the case is slightly more voluptuous than I would have guessed for a travel watch, and the softly curved bezel looks great under DLC. I think the designers were quite smart to put these kind of smooth lines into the make-up of a watch this size. In my mind, it makes the Carl F. Bucherer Patravi TravelTec watch far more wearable. 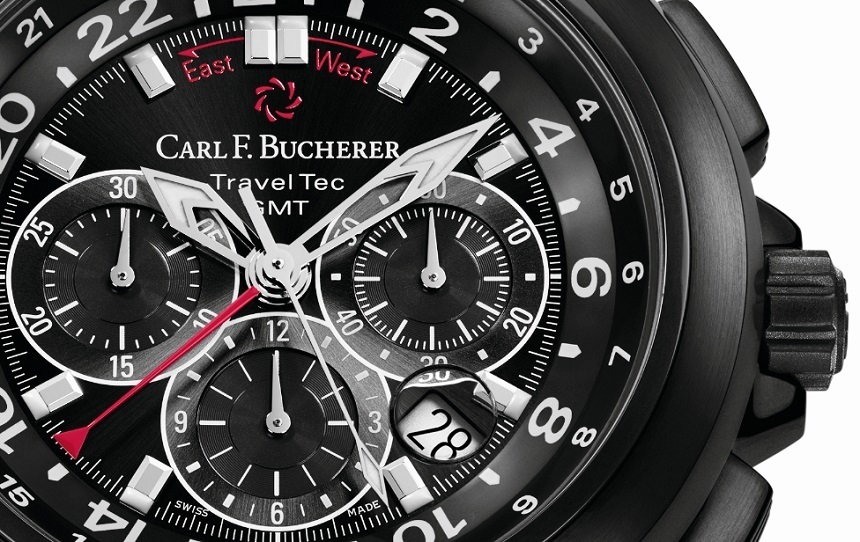 Carl F. Bucherer is a brand that is providing some unique options to watch buyers who want something that stands out in a crowd but is still unique enough to not be on every other wrist. Sure, Sylvester Stallone has worn these pieces in the past, like when he sported a gold version a couple of years back, but the brand is hardly as ubiquitous or recognizable as Panerai. And that can be a very good thing for fans of the brand. Price for the Carl F. Bucherer Patravi TravelTec in black with DLC coating is $15,800. carl-f-bucherer.com