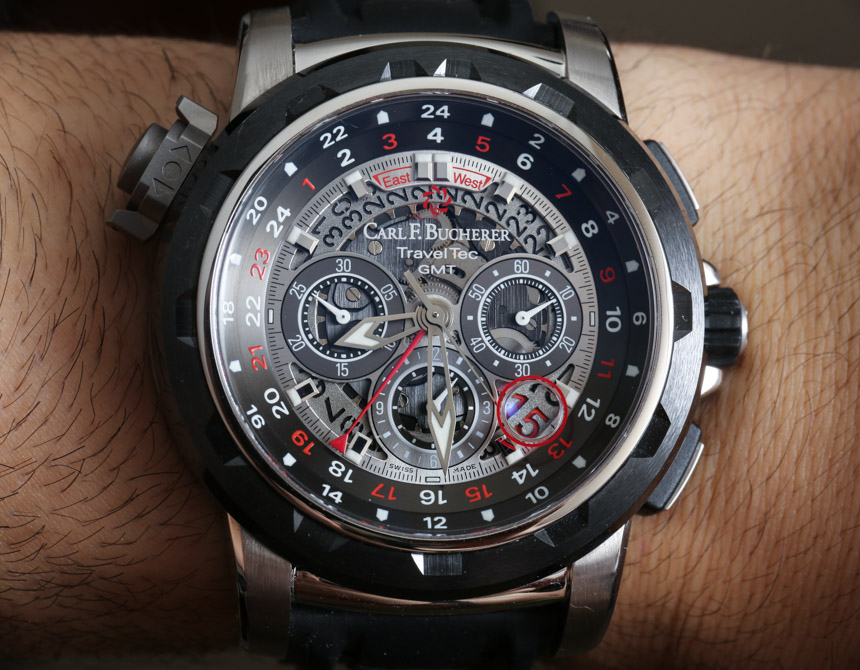 Carl F. Bucherer is a brand that I think you’ll be hearing a lot more about in the next several years and today I’d like to review the Patravi TravelTec GMT FourX (ref. 00.10620.08.33.01). While the “Carl F. Bucherer” brand is relatively new, the history of the company is impressive. Many people who frequent Switzerland and watch store hub locations will be familiar with the name “Bucherer.” Indeed, the chain of watch retailers is related to this brand. For much of the watch brand’s life they wanted to remain independent from the retailers, but I have a feeling that they are going to feed off of each other more in the near future. This is especially because the Bucherer name has been on timepieces for a long time, and the Carl F. Bucherer brand will likely seek to leverage that positive legacy in a beneficial manner.

In 2008 Carl. F Bucherer released their first in-house movement with the caliber A1000 (debuted on aBlogtoWatch here). Since then the A1000 (with its cool peripheral automatic rotor) and its derivatives have been the basis of many Patravi collection timepieces. Though, not in this one. That is because the first Patravi TravelTec GMT watch was released in 2006, and later in this “FourX” variant. Even though it doesn’t strictly have an in-house movement, it does specially modify the base ETA, offering something unique. 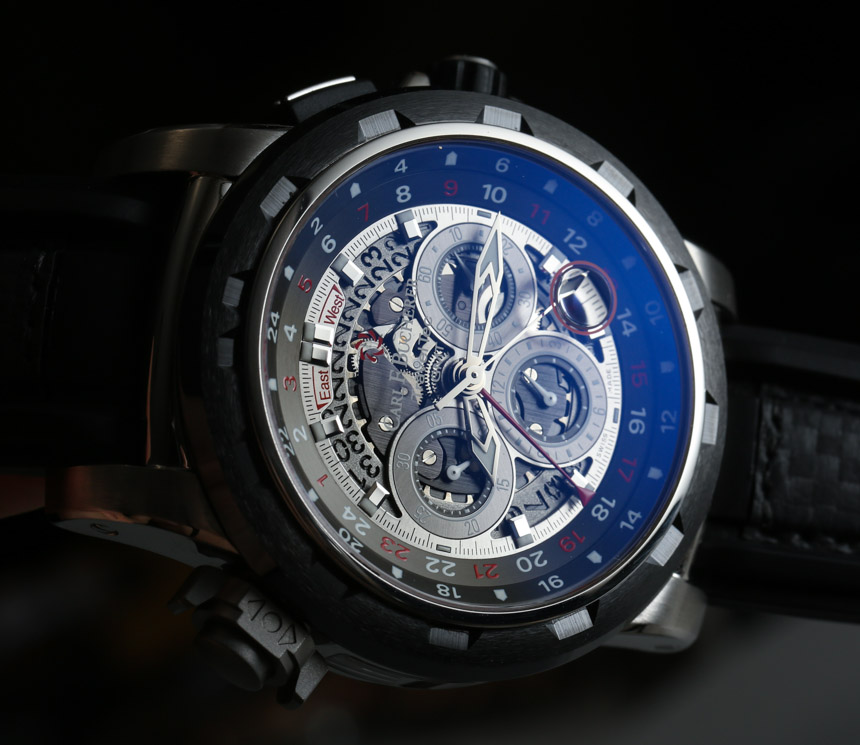 To be honest, when I first noticed the Patravi TravelTec GMT FourX I was not in love it with. I felt that the design was a bit all over the place and the dial was too difficult to read. That was at first glance and somehow after wearing the watch for a nice long time I’ve come to rather enjoy it. It is not a timepiece without its quirks, but it satisfies in a lot of departments, and I surprisingly didn’t find it that difficult to read.

It is true that at a glance the hands are difficult to spot on the dial if you are just looking at the dial generally. Though for me when I went to look at the dial in order to read the time I never had much trouble. It is similar to the dial of many Breitling timepieces in that they are rather busy compared to other watches, but there is a method to their madness. If you fancy the TravelTec GMT FourX in all respects other than the dial, then you can opt for the non-FourX edition that does not have a skeletonized dial. The FourX model is considerably more expensive but in may ways makes the piece a lot more interesting than the sum of its parts. 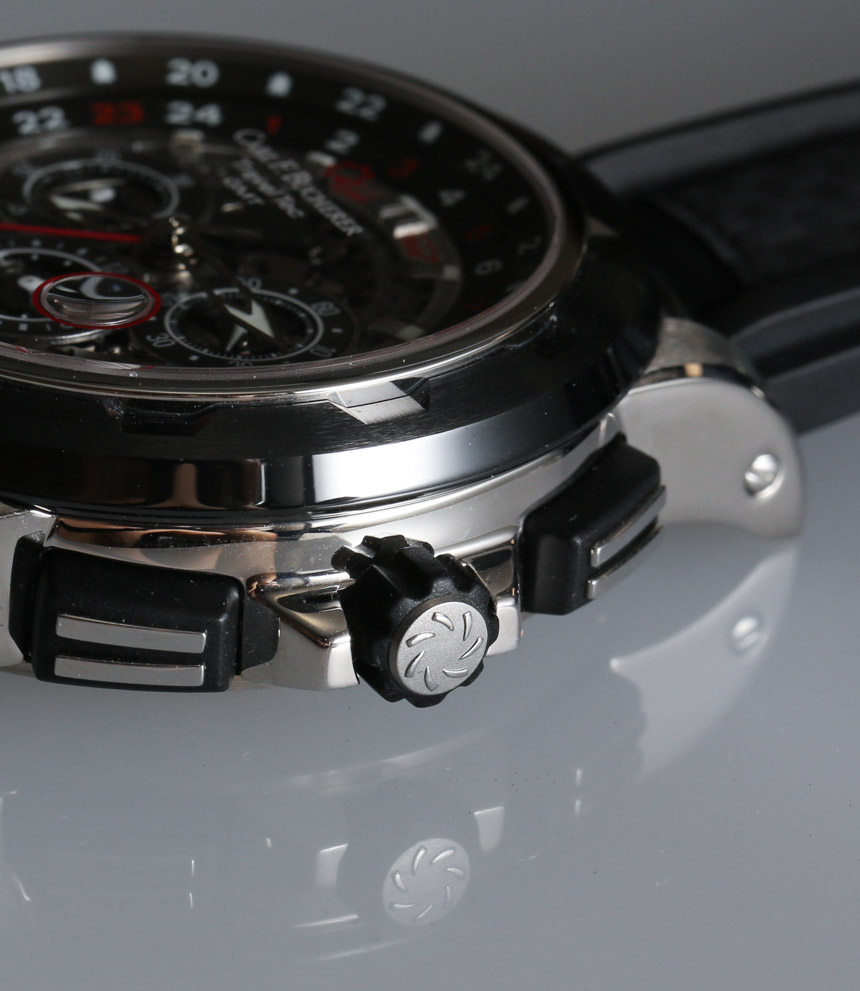 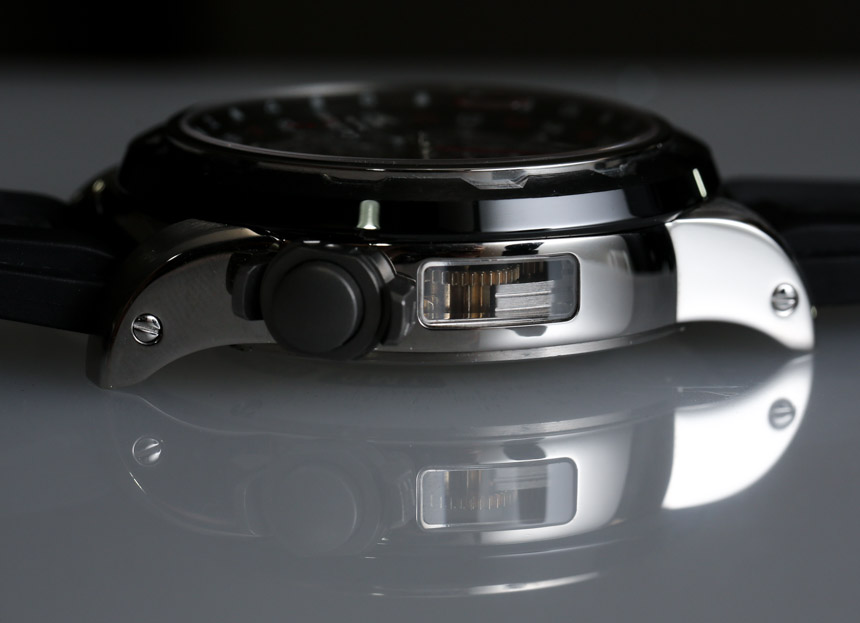 Let’s discuss the movement and functionality before discussing the case and design in more detail. In a nutshell – as the name clearly implies – the Patravi TravelTech GMT FourX is a timepiece meant for travel. In that regard it has a lot of utility. The movement is known as the caliber CFB 1901.1 and includes a base ETA 2894 automatic chronograph with a GMT complication built on to it. There is a lot of movement customization, such as the unique date disc. Also, the movement is a COSC certified Chronometer and it has about 42 hours of power reserve.

The date disc is stenciled metal which passes over a red plate that colors the numeral on that day’s date. Over the indicator is a reverse sapphire crystal mounted magnifier lens that allows the date to be read more easily. I rather like those. The GMT hand combined with the normal hands allow you to track two time zones. Note that as is typical on many GMT watches, the hour hand for the local time adjusts in full hour increments if desired (which is also part of the date setting feature). The TravelTec GMT however allows for you to track a third time zone with a complication that is part of the case. 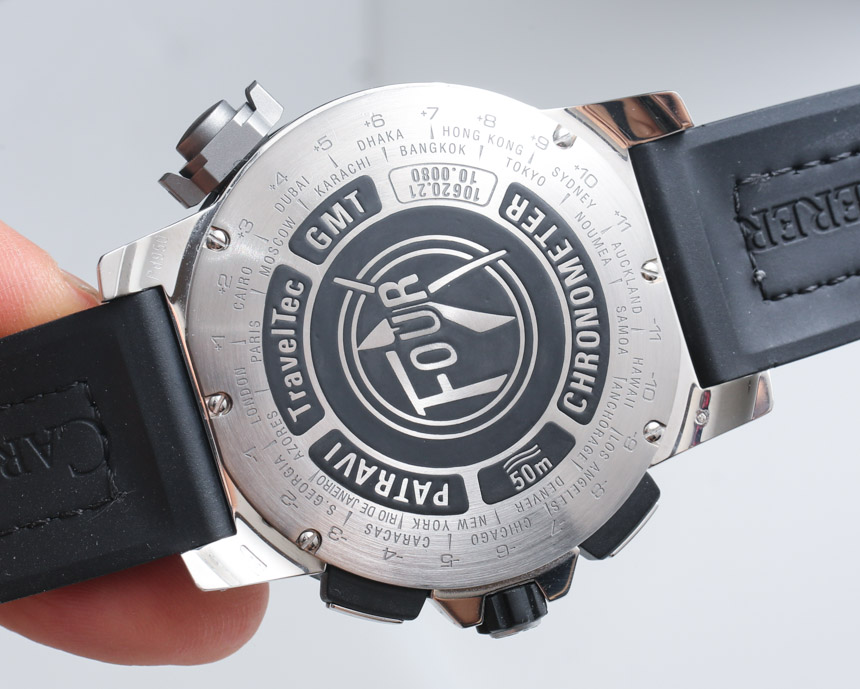 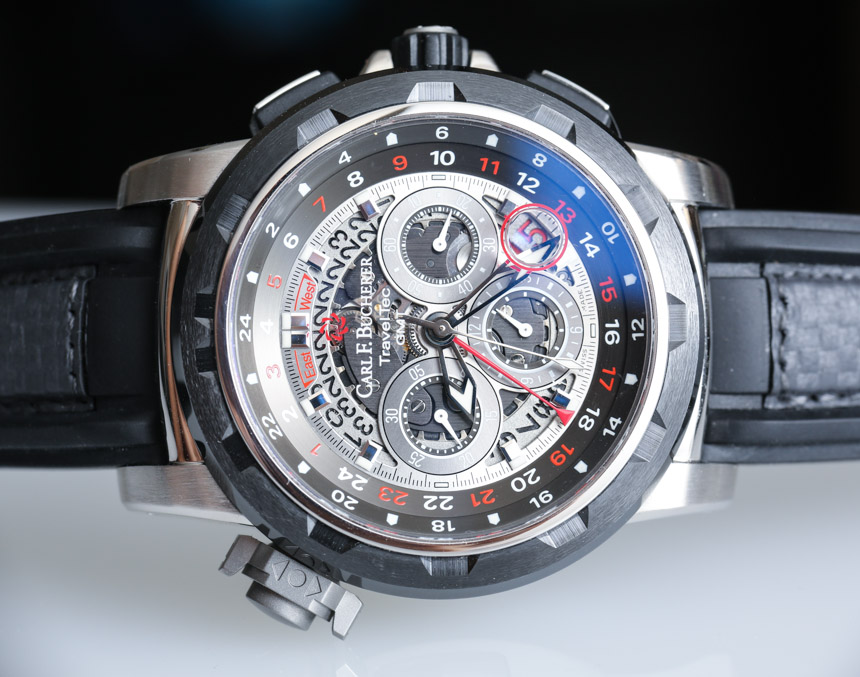 See that pusher located near 10 o’clock? It is used to turn an inside rotating bezel in one hour increments. The pusher has a switch over it that you can turn. It locks the pusher in place or allows you to turn the inner ring to the left or the right. One direction implies that you are changing the time zone when traveling east, and turning it the other way implies you are traveling west. It is a nifty system and the pusher and switch is done in titanium. I only wish it would be something I’d use more, though if you did want to use this ring as the second time zone indicator you could do that just as easily too.

So, in total, the watch has the time, GMT hand, GMT ring that goes east or west, a 12 hour chronograph, and the date. That is an impressive list of features and for watch lovers who love functions, this piece doesn’t really disappoint. The goods news, is that it is also useful. For those traveling, it is indeed a handy watch. Why do I point this out? Because sometimes brands like to get complicated just for the sake of being novel or getting complicated. There is no real rhyme or reason behind many novel assortments of features aside from the fact that no one has done it before. I have to say that for the most part Carl F. Bucherer does design new pieces intelligently with at lest some particular use or demographic user in mind… more »