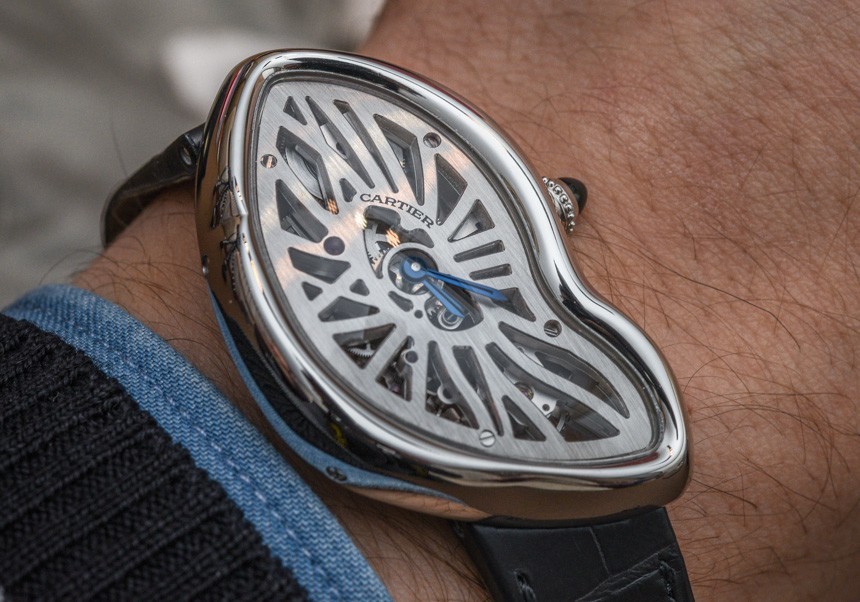 Want a watch that is almost guaranteed to become a fascinating collector’s piece somewhere down the road? Then you might want to take a close look at what is destined to be a unique and rare treat from Cartier. I am, of course, talking about the 2015 Cartier Crash Skeleton, which adds a new men’s version of the famous crash watch to Cartier’s venerable stable of modern timepieces.

It was back in 2012 that Cartier decided to relaunch their odd Crash collection (for women). Odd because, well, it is. The story of the Cartier Crash watch is one that I spend more time discussing in that article I just linked to above. Cartier (perhaps understandably) doesn’t market the actual creation of the watch with as much transparency as I think collectors deserve. According to Cartier, the Crash was a simple byproduct of the 1960s in “Swinging London.” That is technically true, but the more gruesome reality is far more interesting. 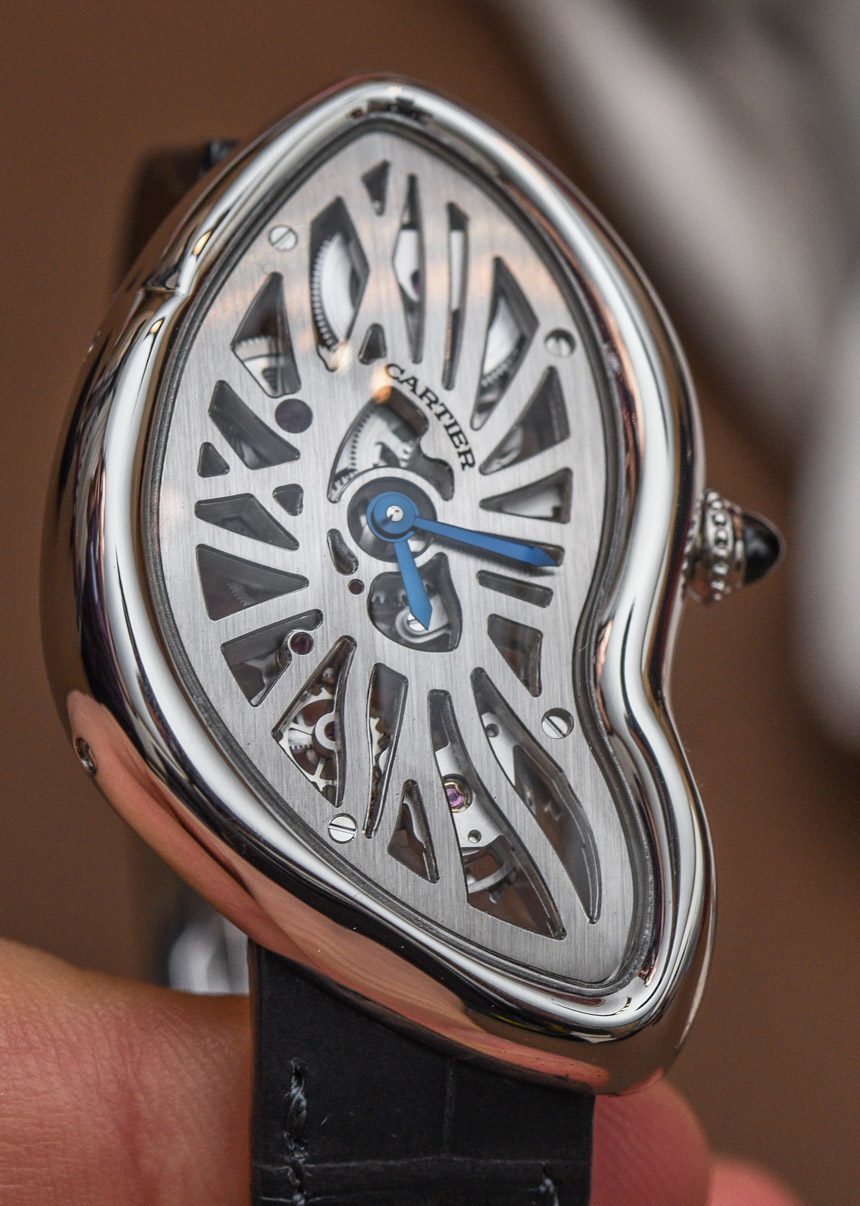 The organic, melting look of the Crash watch is no accident. It actually does represent a melted watch – a Cartier that was in a burning car crash and the “deformed” watch was all that survived of the wearer. Cartier decided to actually produce watches based on the melted watch which became the aptly named “Cartier Crash.” Some of the late 1960s Cartier Crash original watches are still around, and I think they would make for very interesting collectors’ models.

Originally a men’s watch, in 2012 when the Cartier Crash was reintroduced, it was as a women’s watch, complete with a lovely bracelet and diamond decoration in all 18k white or rose gold cases. Quirky and unique, the Cartier Crash remains a polarizing design cherished by some and mocked by others. It does have a special intrigue to it, and while I am not sure if I could be a Crash wearer, there is a definite attraction I feel toward the look of the case. 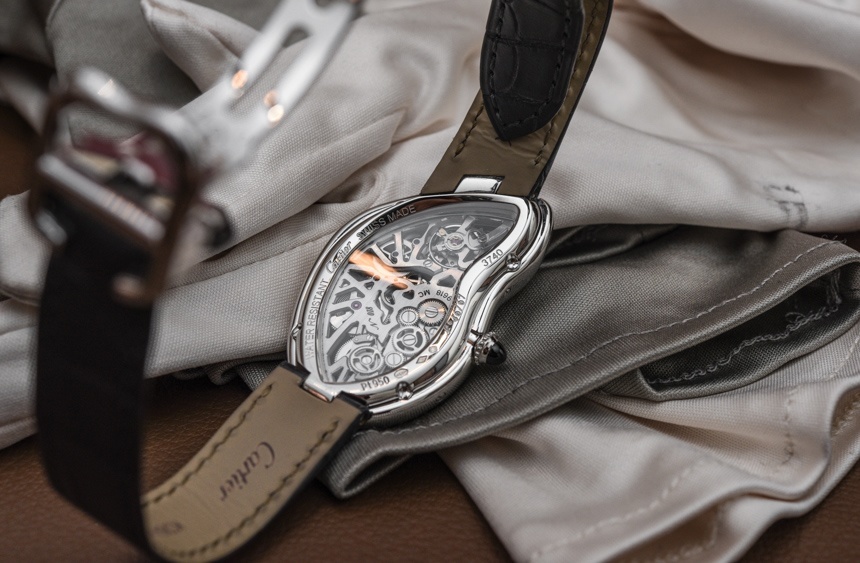 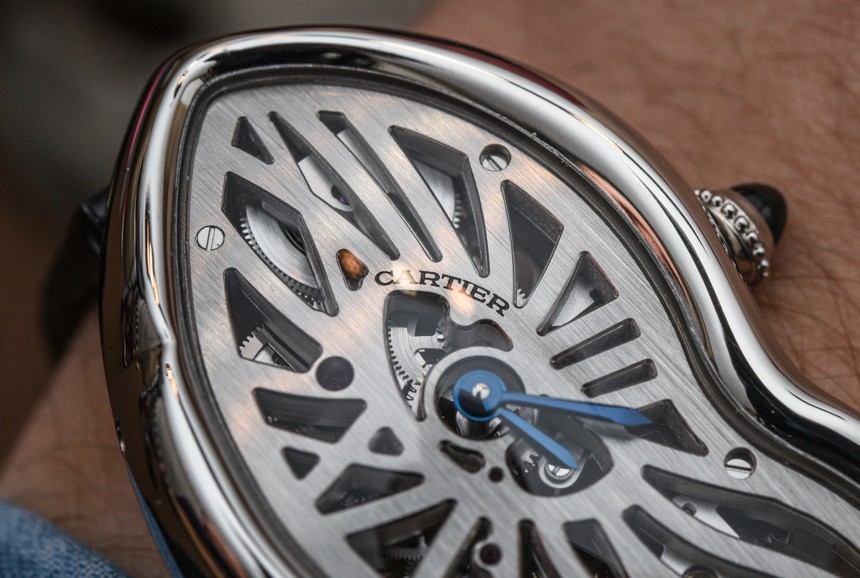 While the 2012 Cartier Crash watches for women are a bit smaller at 25.5mm wide by 38.45mm tall, the 2015 Cartier Crash Skeleton watch is designed more for men in mind with a larger case – as well as a skeletonized dial and movement. For 2015, in a solid platinum case, the Cartier Crash Skeleton is 28.15mm wide and 45.32mm tall (thanks for being so specific with those measurements, Cartier). This doesn’t make the Crash huge by any means, but added size and especially height help make this unique creation a bit more masculine again. 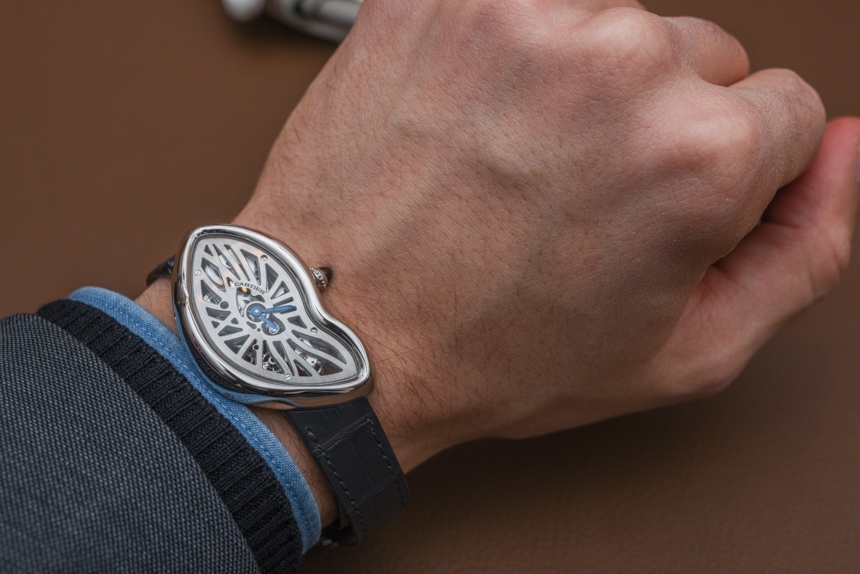 While I am writing this article about the watch, our David Bredan is the one seen wearing the Cartier Crash Skeleton watch in the images. You can see how it doesn’t look too small on the wrist and the proportions remind me of how a Jaeger-LeCoultre Reverso looks. I don’t know if I would wear the Cartier Crash Skeleton with short sleeves, though, as that might make it appear on the smaller side.

From a technique standpoint, what is the most interesting element of the Cartier Crash Skeleton is how Cartier adopted its now signature movement skeletonization design aesthetic for the more organic “melted” look of the Crash case. The in-house made and hand-finished Cartier caliber 9618 MC manually-wound movement is design to “move” with the case shape – offering something that I’ve never quite seen before. 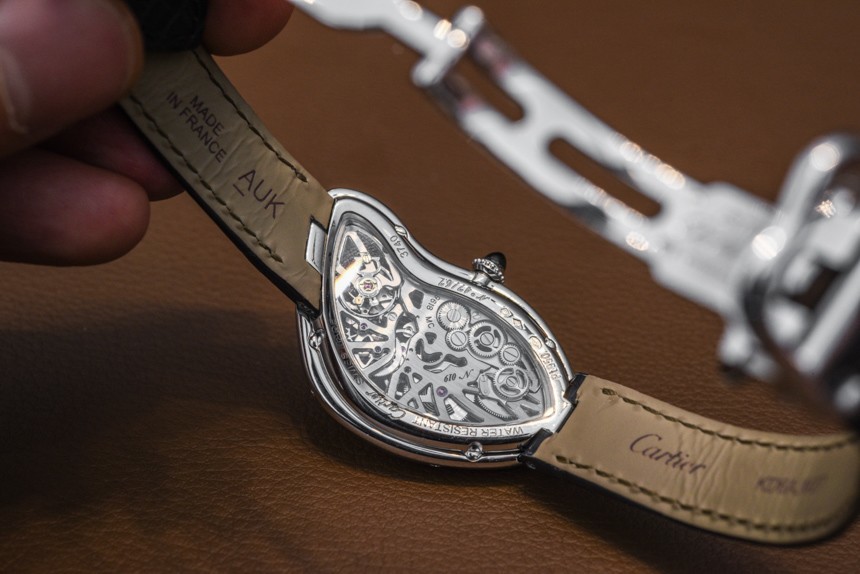 It might seem like a simple thing to imagine a skeletonized movement that is more organic in design and less conservatively “angular,” but executions of this are exceedingly rare. To come from a major company like Cartier makes it more special because while Cartier is a name collectors will know for a long time to come, models like the Cartier Crash Skeleton will be very rare to say the least. 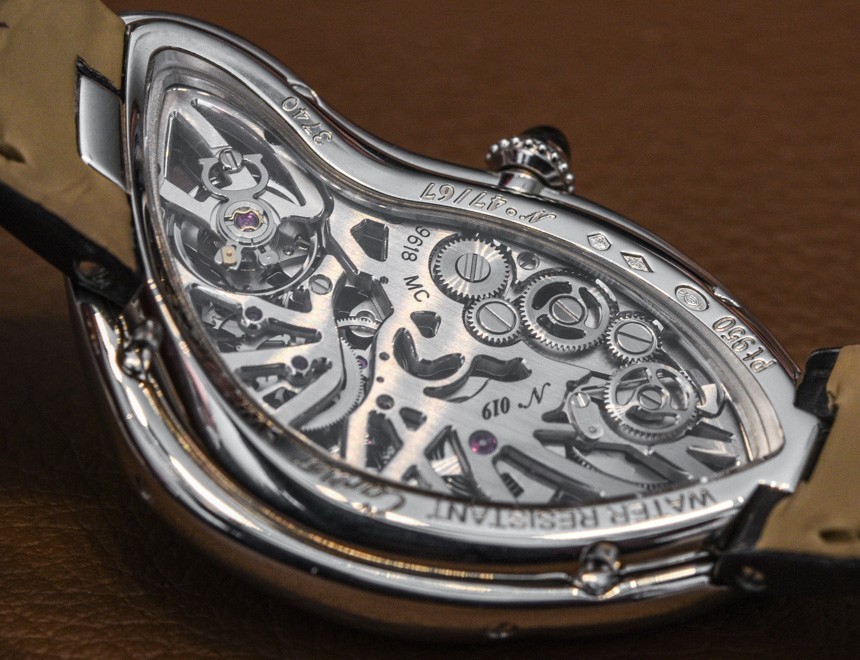 The skeletonized movement is topped with a skeletonized face which has Roman numeral hour markers engraved into it. The edges of the numerals are hand-beveled for a high-end look. Given this degree of finishing, Cartier places watches like the Crash Skeleton among their more prestigious “high watchmaking” category of products. 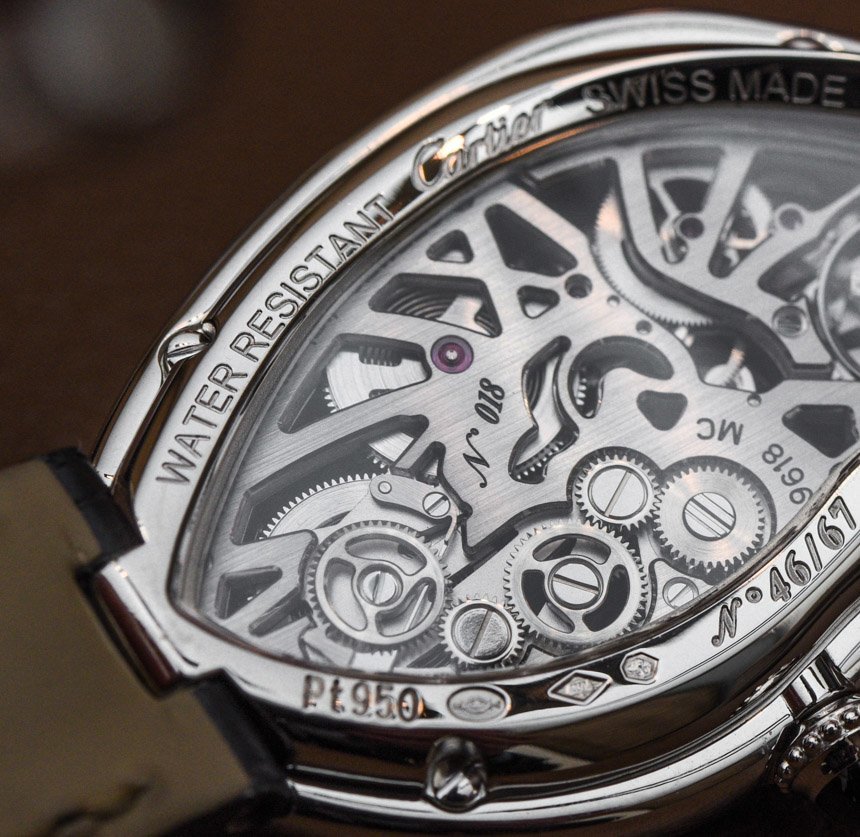 The 9618 MC movement operates at 4Hz (28,800 bph) with about 72 hours of power reserve (impressive for the size) and is produced from 138 parts. It indicates only the time with hours and minutes via two blued steel sword-style hands on the dial. In addition to the platinum case, the Cartier Crash Skeleton has a platinum crown (with set blue sapphire cabochon) and is matched to a black alligator strap. There is an avant-garde elegance to the watch which, while not divorced from the Cartier aesthetic, is something much less uncommon than the typically refined and more conservative looks people tend to associate with the brand. I am pretty sure that if the Cartier Crash was not part of Cartier’s history, the company today would never release a watch of this character and design. 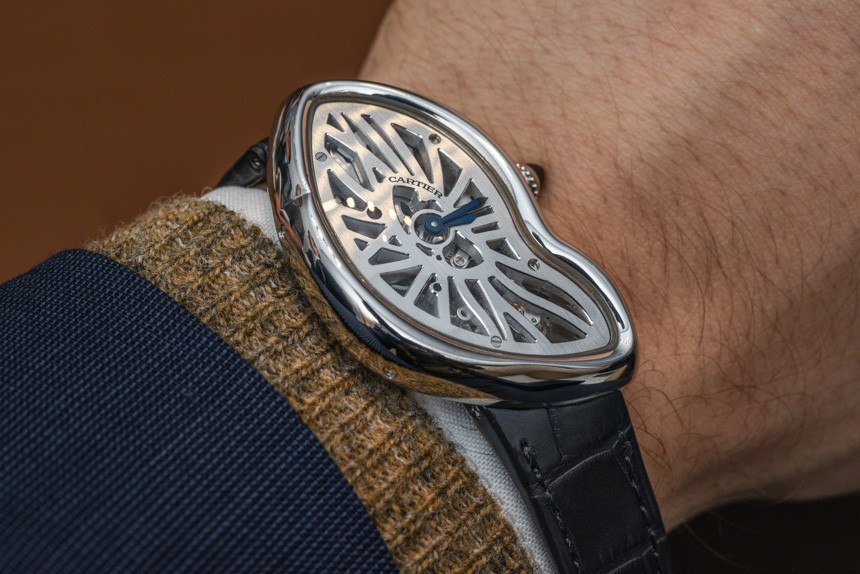 As a men’s watch, the Cartier Crash Skeleton is going to be an acquired taste, for sure. I think it looks pretty good, and David actually liked it a lot as well. When producing a watch like this, Cartier has no doubts that it will have niche appeal at best. “Niche appeal” is really one of the top reasons I love the luxury watch industry – because there is a degree of risk taking, allowing for wild stuff to be produced for the few people that feel a real connection to it. I just wish more timepieces like this came with “democratic pricing.” That isn’t exactly the case here, as this decidedly “luxury Crash” comes with a cost that you’d expect from a solid platinum watch with a skeletonized movement. Price for the Cartier Crash Skeleton watch is $78,500. cartier.com