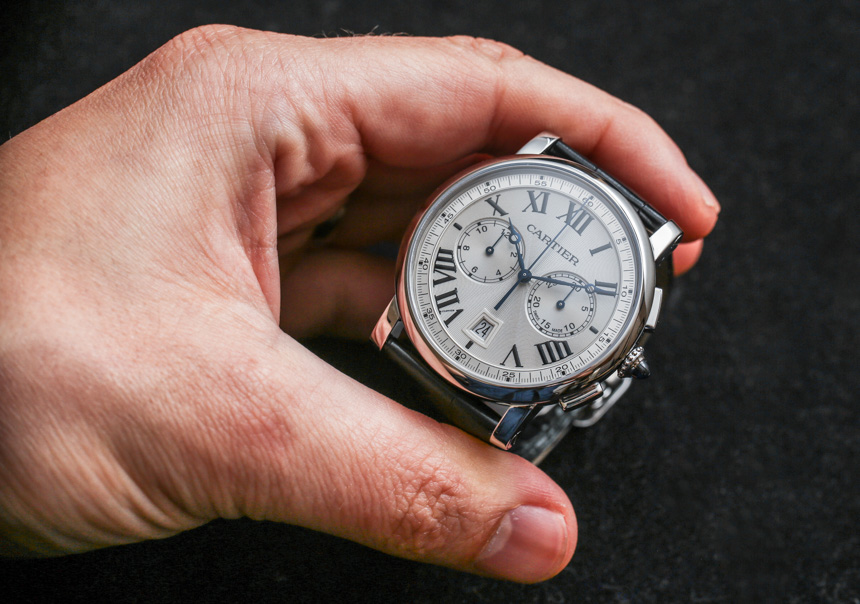 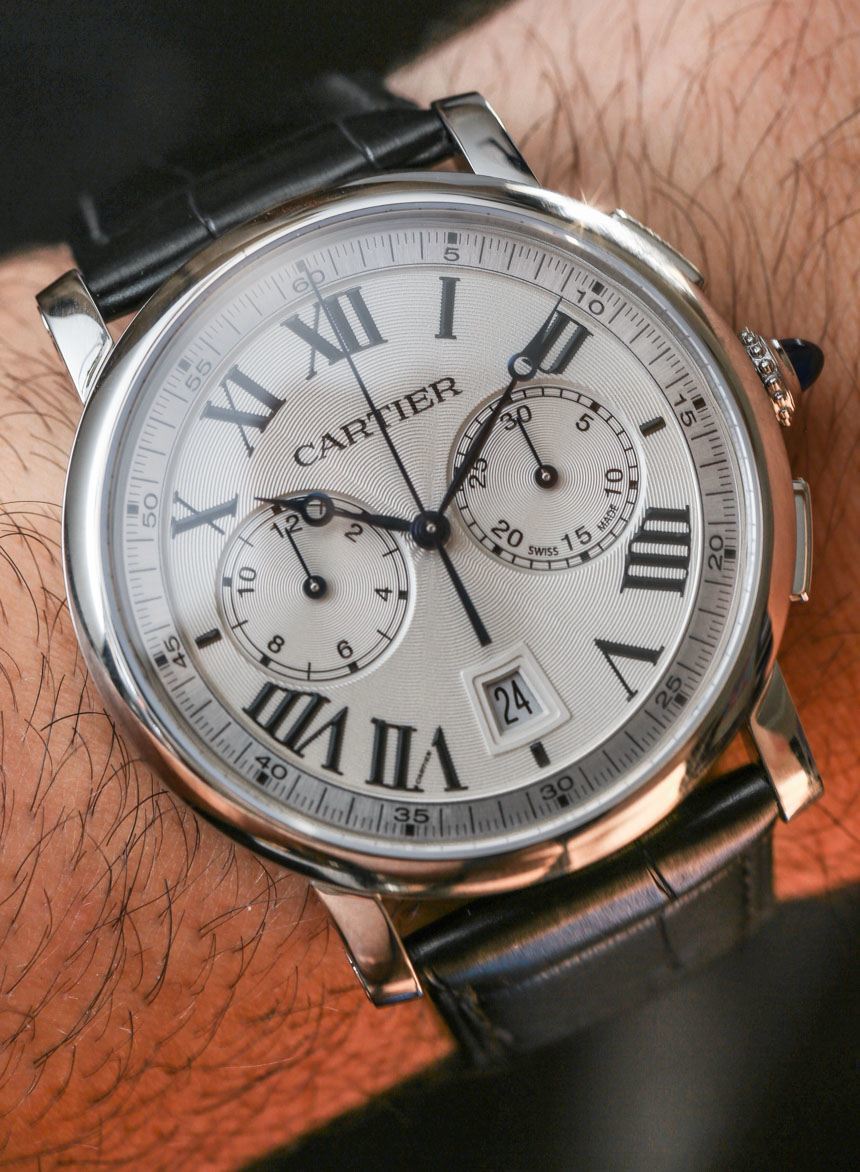 Cartier has a few lovely chronographs in their current watch collection (very few, actually), but the company isn’t exactly known for being a producer of too many chronograph timepieces. Think of the classic Tank or Santos, or other case shapes that help define the classic French-based (Swiss Made) luxury firm whose products are so often part of an elegant lifestyle. Actually, if you think of most classic Cartier timepieces, they only indicate the time. With that said, recently, chronograph models have begun to find their way into more Cartier timepieces such as this newer Cartier Rotonde Chronograph – and they even include an in-house made Cartier mechanical chronograph movement. 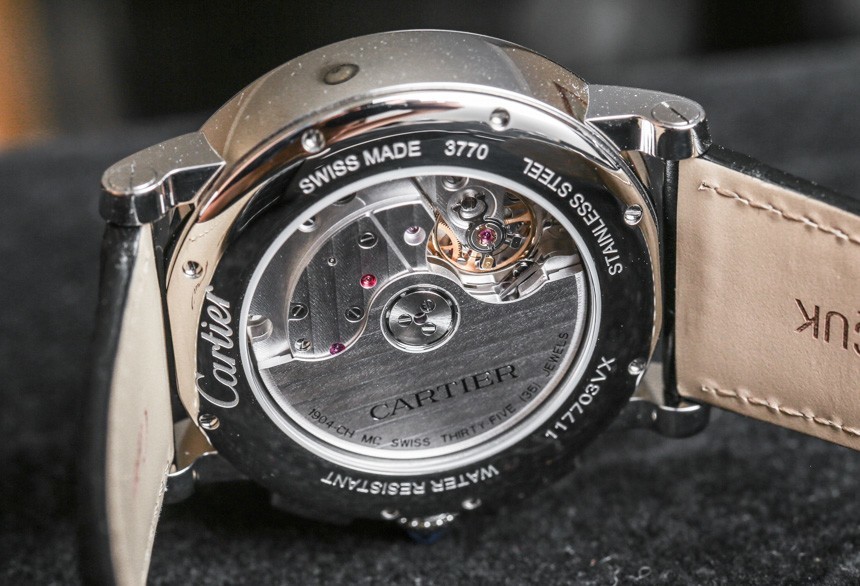 That movement is the Cartier calibre 1904-CH MC automatic chronograph which, I believe, debuted in 2013 when Cartier launched the Calibre Chronograph (hands-on here). A pretty workhorse, the 1904-CH MC is a refreshingly modern chronograph movement designed for functionality and practicality – with an attractive level of decoration, even though it is a “mass-produced” movement. I like that the movement is visible through a sapphire crystal window on the rear of the case. 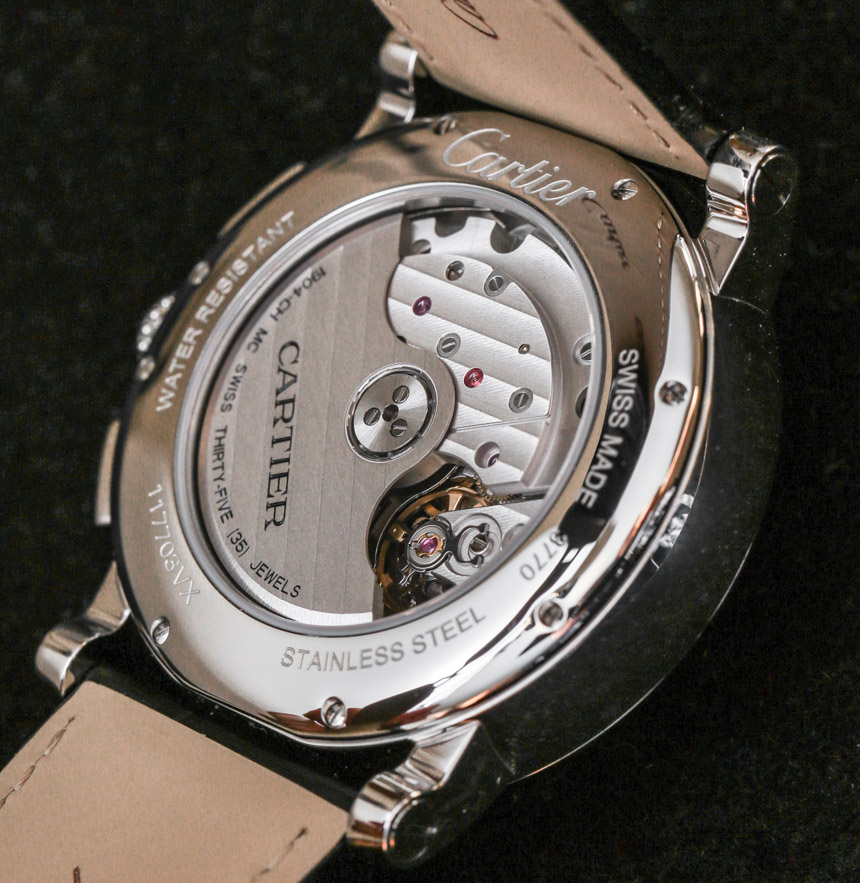 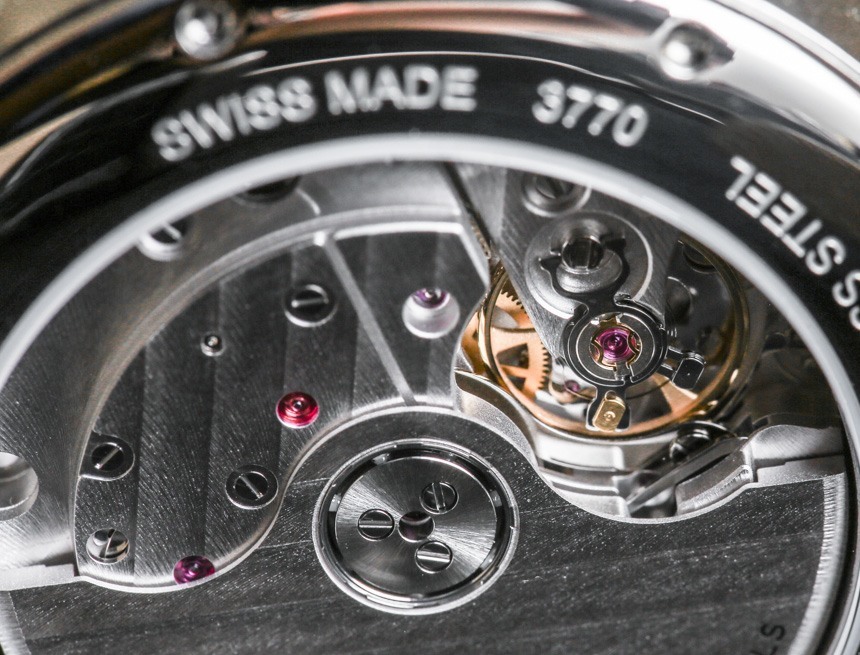 The 1904-CH MC is built from 269 parts and 5.72mm thick. Operating at 4Hz (28,800 bph), the movement has 48 hours of power reserve between two barrels and, of course, features automatic winding. The chronograph has a column wheel and measures up to 12 hours. This is something that makes the layout of the 1904-CH MC movement a bit unique – that even though it is a bi-compax chronograph with just two subdials it nevertheless measures up to 12 hours. Often, chronographs with just two subdials use one for the running seconds and another for the chronograph minutes (often up to 30 only). Here, however, Cartier decided to remove the running seconds hand altogether and instead offer a 12-hour chronograph. I appreciate this decision because it adds a world more of utility to the Cartier Rotonde Chronograph, and if you really want to measure seconds, all you need to do is activate the chronograph. 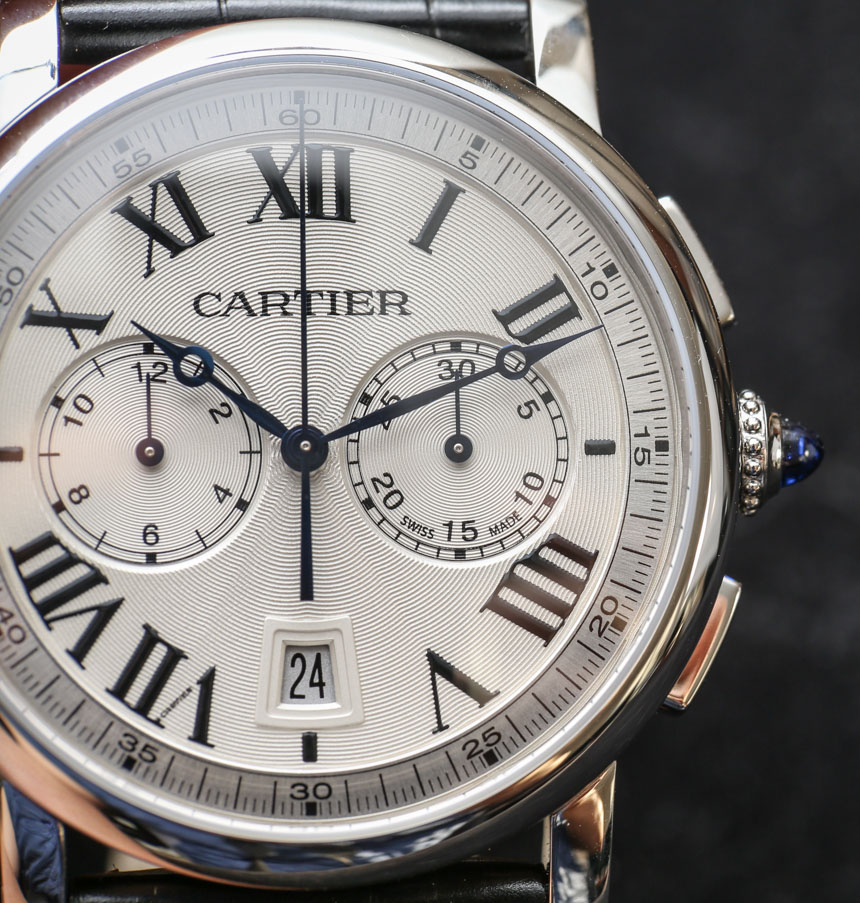 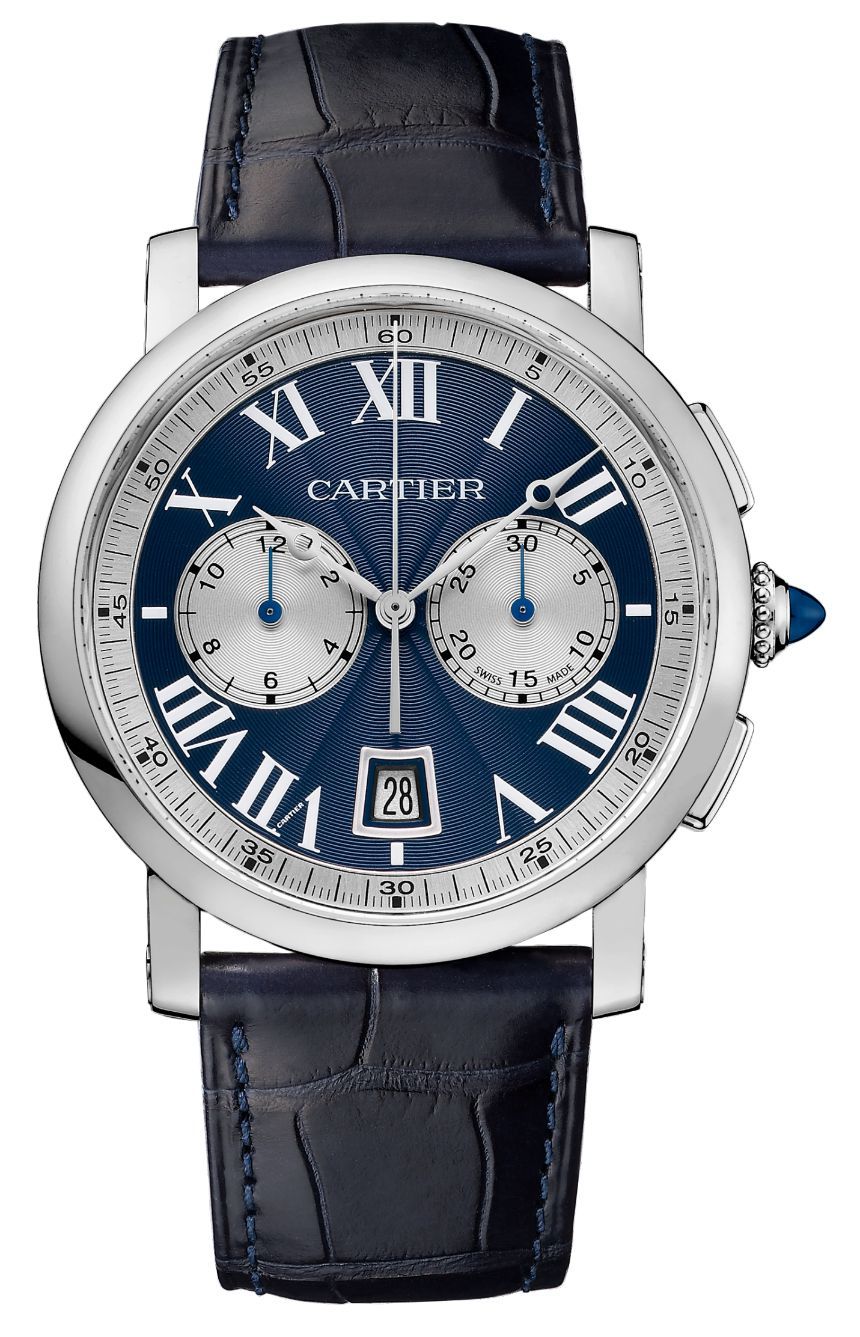 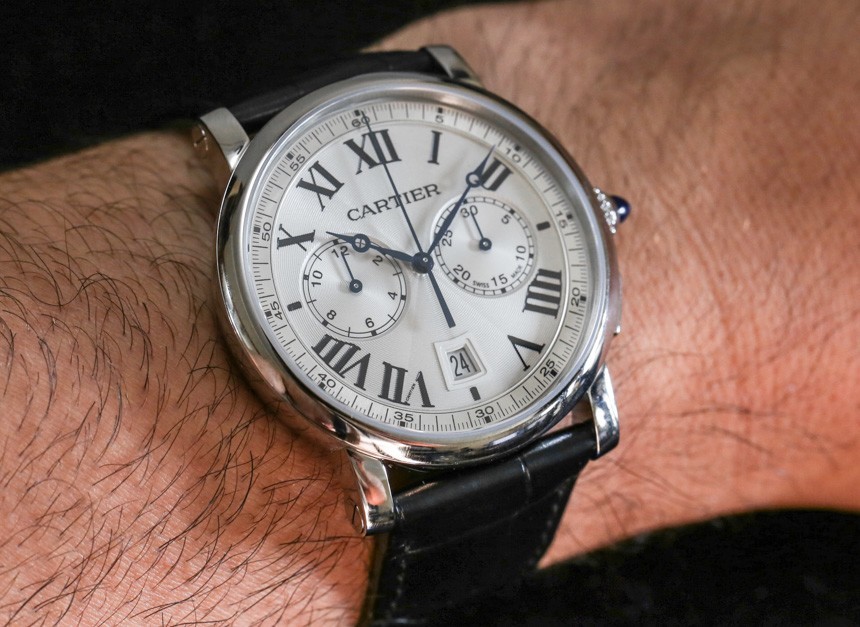 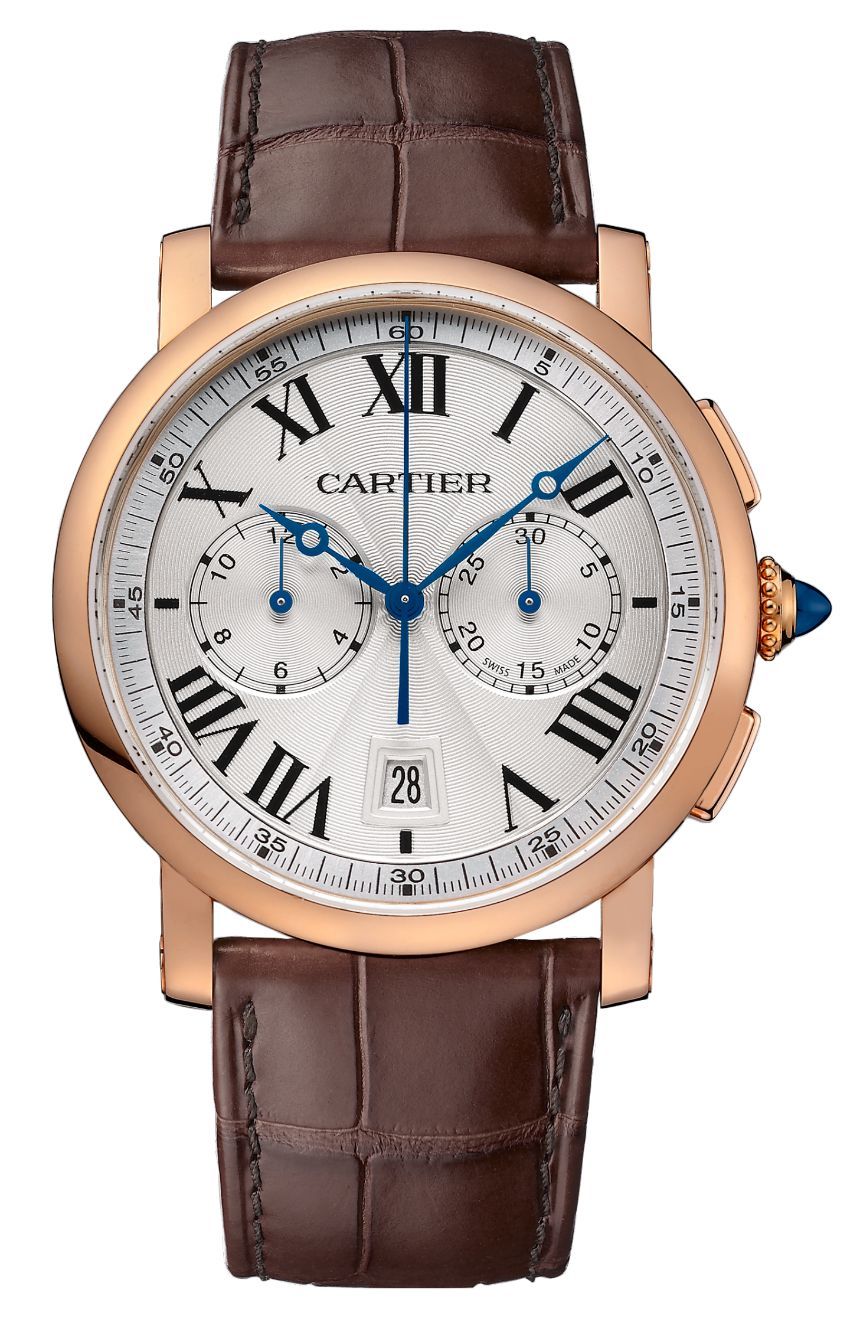 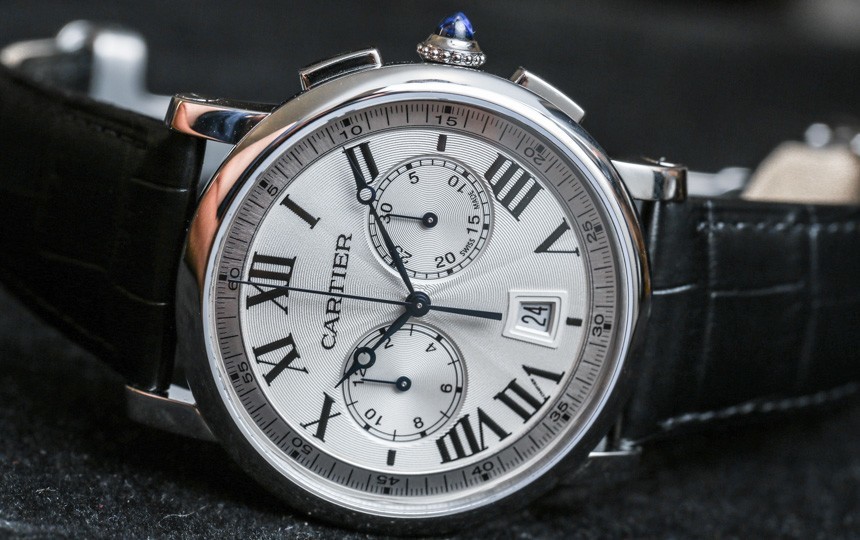 The Rotonde case serves as a great platform for a Cartier dress chronograph watch. At 40mm wide in this iteration, the case is 12.15mm thick and, here, in steel (water resistant to 30 meters). Note that Cartier also offers the Cartier Rotonde Chronograph in 18k rose gold as well as a limited edition 18k white gold version (with a cool blue and silver “panda dial”). While the precious metal versions are lovely, they are more than double the price of the steel version, so the value proposition drops off quite a bit, given the premium for gold. 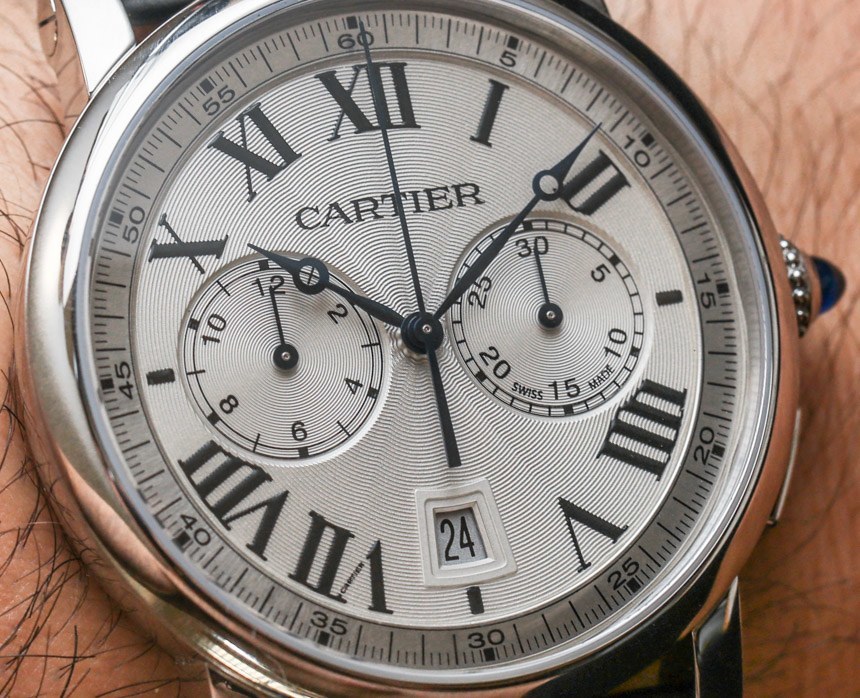 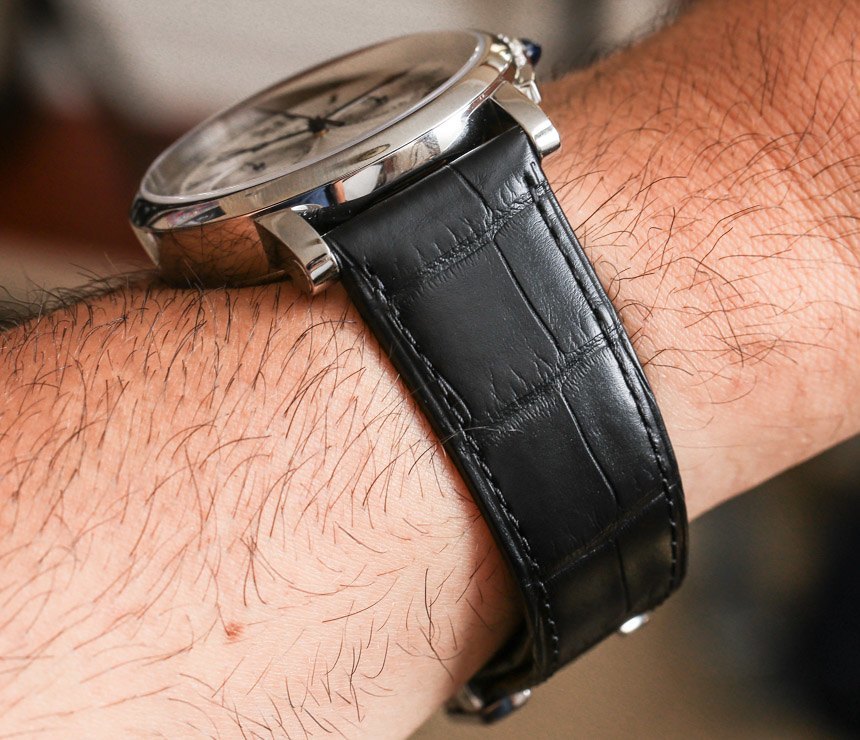 Cartier’s Rotonde case design is very clever, being a moderate size but not feeling small due to the case and lug thickness. The lugs gracefully curve, and the entire case tapers up a bit from the base to the bezel. It is subtle enough to appear very traditional, but the proportions and details on the Cartier Rotonde are impressive, in my opinion. Cartier further opts for vintage-style rectangular chronograph pushers, and you of course have a distinctive Cartier crown with a beaded edge and a blue spinel cabochon. Cartier also uses blue sapphire crystal for some cabochons but the spinel looks very similar. Since both stones in this instances are synthetic, I am not sure if it is a cost issue moving over to spinel or just something about ease of production. 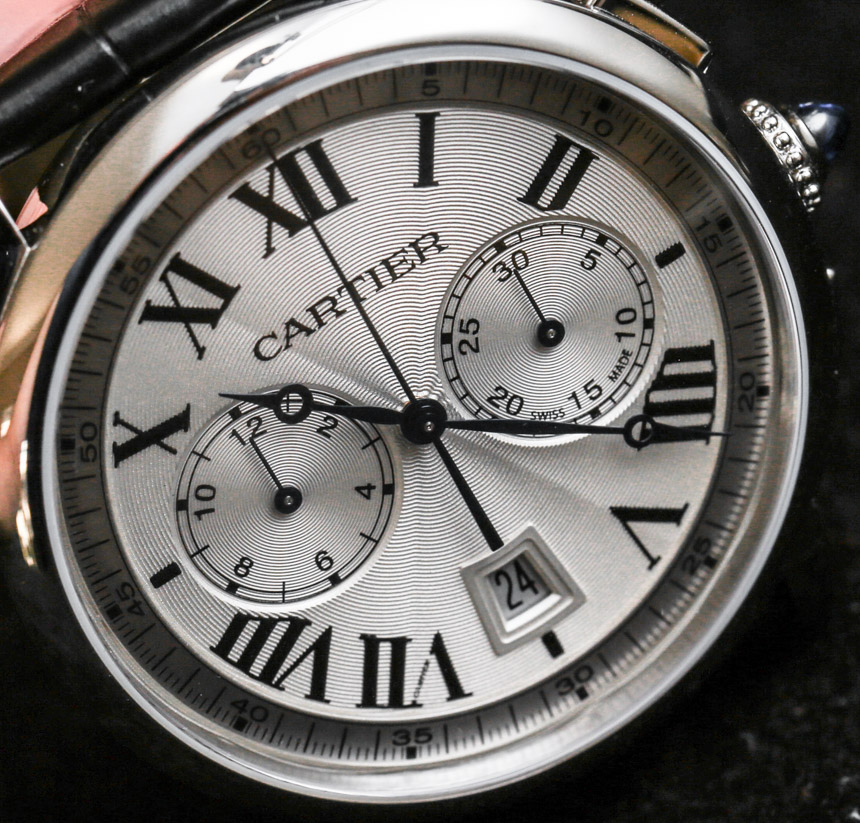 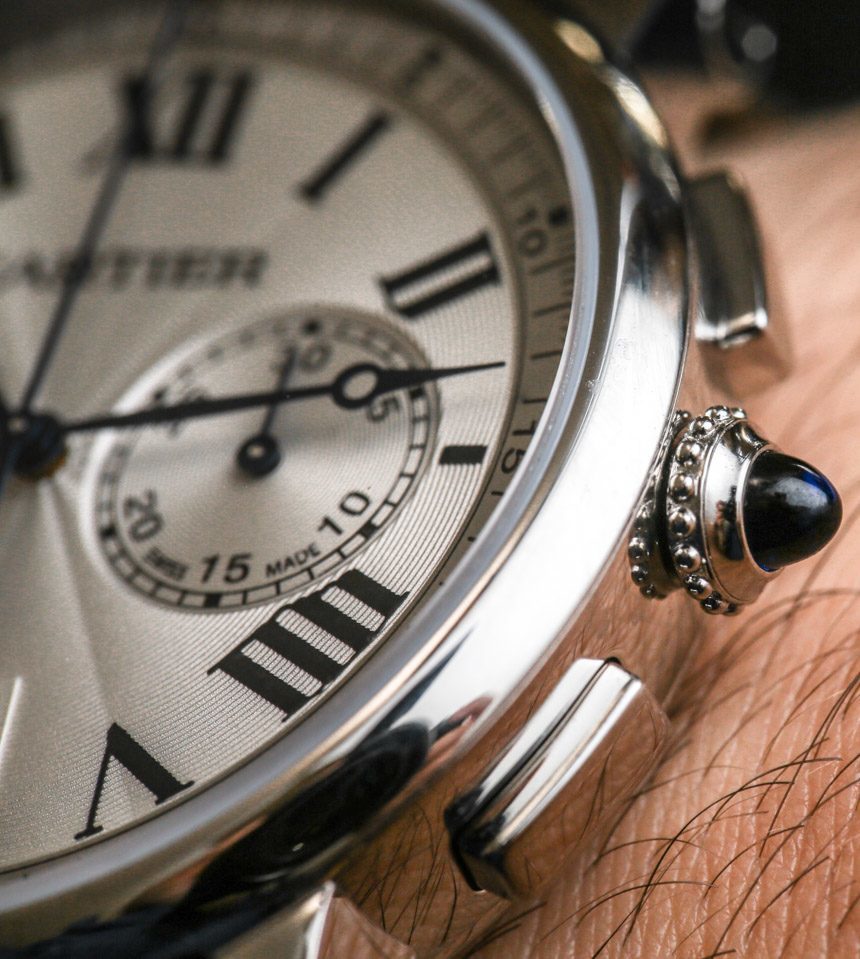 Suffice it to say that I rather like not only the Rotonde case but how the Cartier Rotonde Chronograph version of it is rendered. The steel version of the Cartier Rotonde Chronograph has a lightly textured silvered dial with black Roman numeral hour markers as well blue steel pomme-style hour and minute hands. The result is a very classic, very Cartier dial. It also seems that compared to some older Cartier models, the logo is getting larger on the face – but its possible that this has been around for a while and I am just noticing it now. 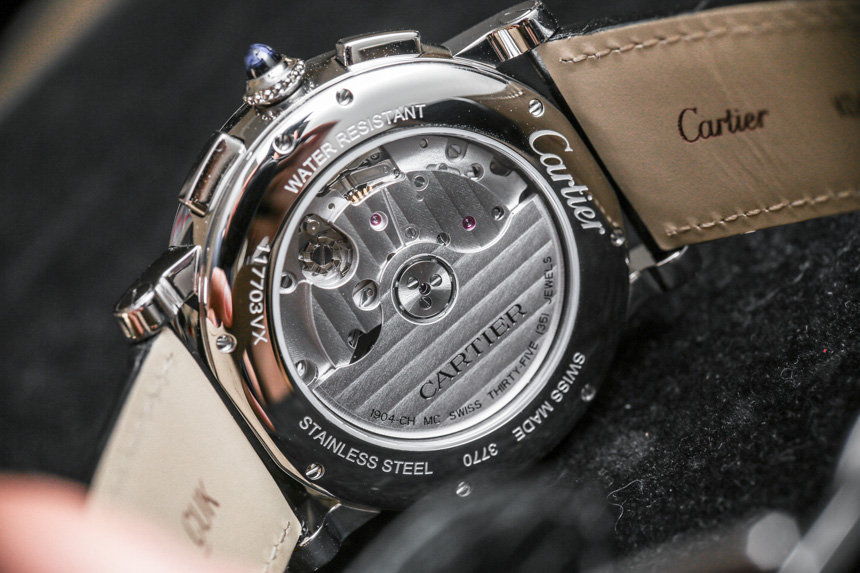 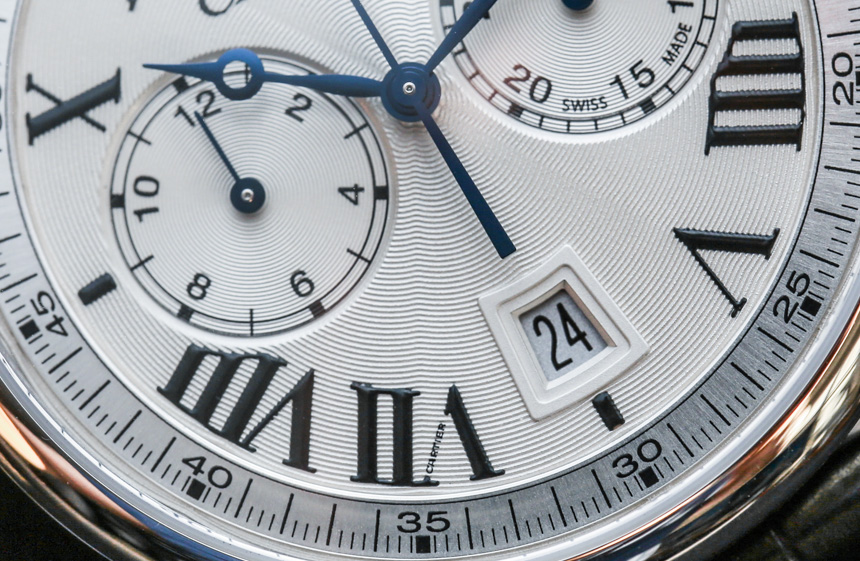 Even though there is no luminant on the dial, the high contrast between the face and the hands offer a welcome degree of legibility. The thick, applied chapter ring around the dial periphery adds an additional layer of depth which means that the Cartier Rotonde Chronograph dial does not appear flat – something which can often be an issue with such classic-looking watch dials. I also don’t get why on a watch like the Cartier Rotonde Chronograph, all the hands are the right length, whereas on some other Cartier models, the hands can be too short. 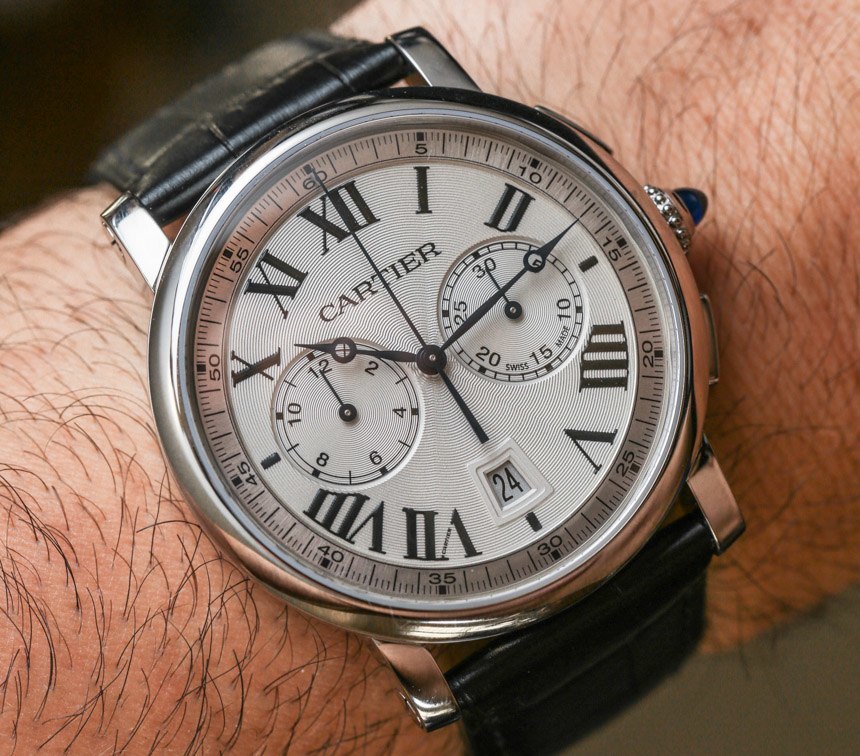 Attached to the case is a black alligator strap and Cartier’s standard deployant clasp which allows you to precisely size the strap, but at the expense of some convenience, given that it is a pain to do, but solid once you’ve carefully sized the strap from both ends.

As a comfortable and attractive dress watch with a bit more visual interest (and functionality) than a time only model, the Cartier Rotonde Chronograph is a very capable everyday wear or office timepiece. It’s good for conservative types as well as those who often like more original designs but sometimes just want a really nicely refined classic. In steel, the reference CRWSRO0002 Cartier Rotonde Chronograph is $9,050. Ref. W1556238 in 18k rose gold is $23,700, and ref. W1556239 in 18k white gold (limited to 300 pieces) is $25,400. cartier.com