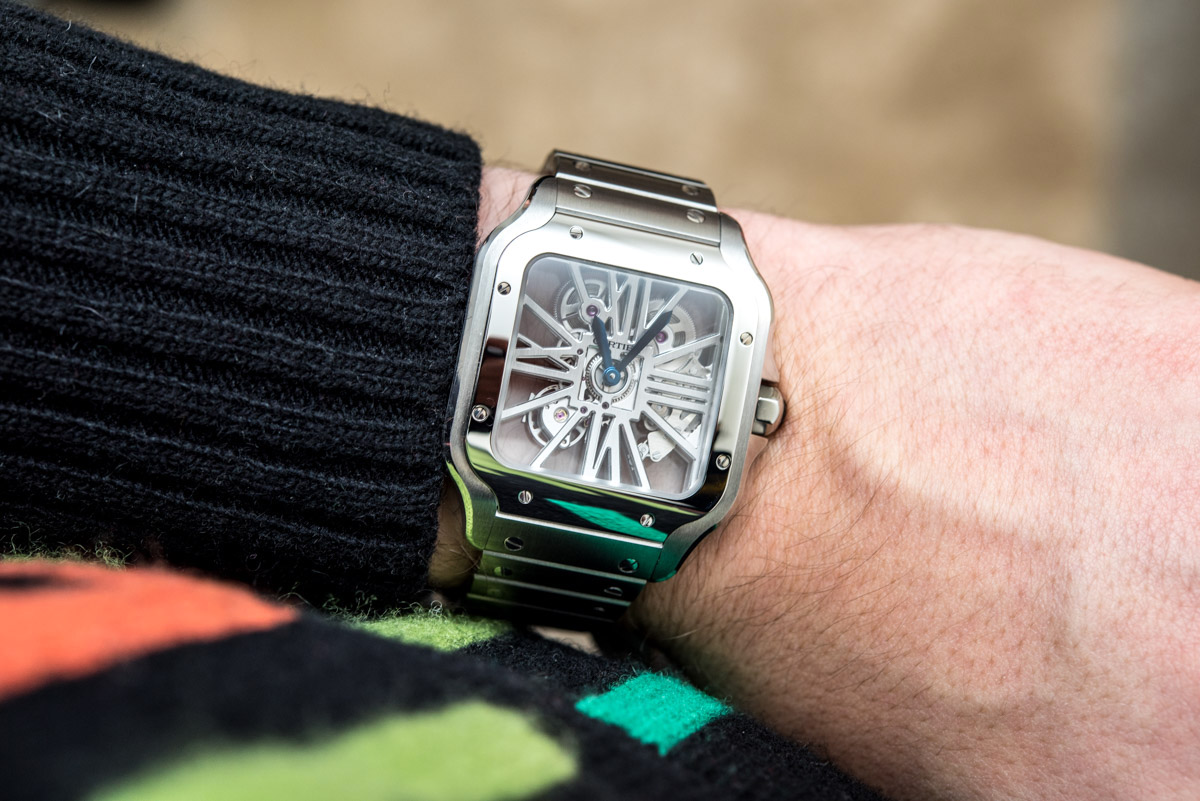 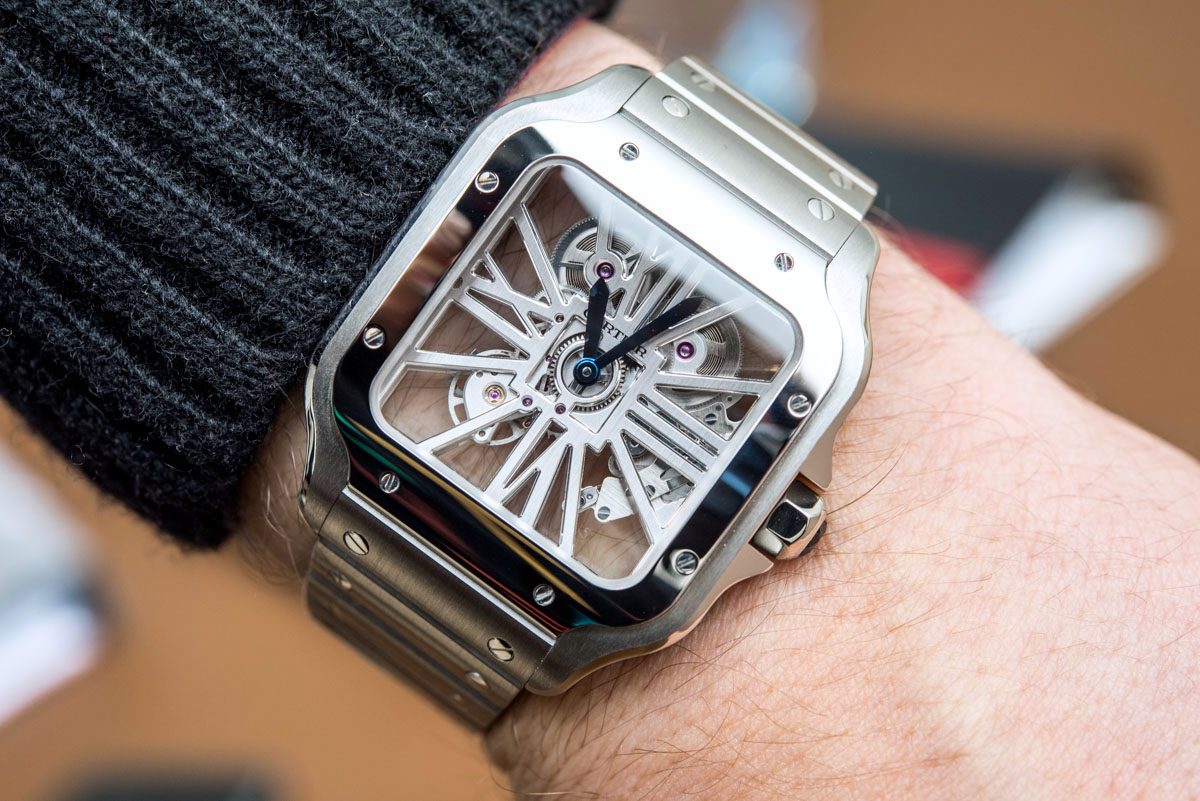 Here’s some food for thought: when was the last time a luxury watch offered by one of the big-big brands looked genuinely more expensive than it actually was? While running high into the 20-thousands is certainly not cheap by any stretch of the imagination, from afar the Cartier Santos De Cartier Skeleton in steel is something that looks as though it ran for twice its sticker price. Too bad it just isn’t as good as it could be, somehow. 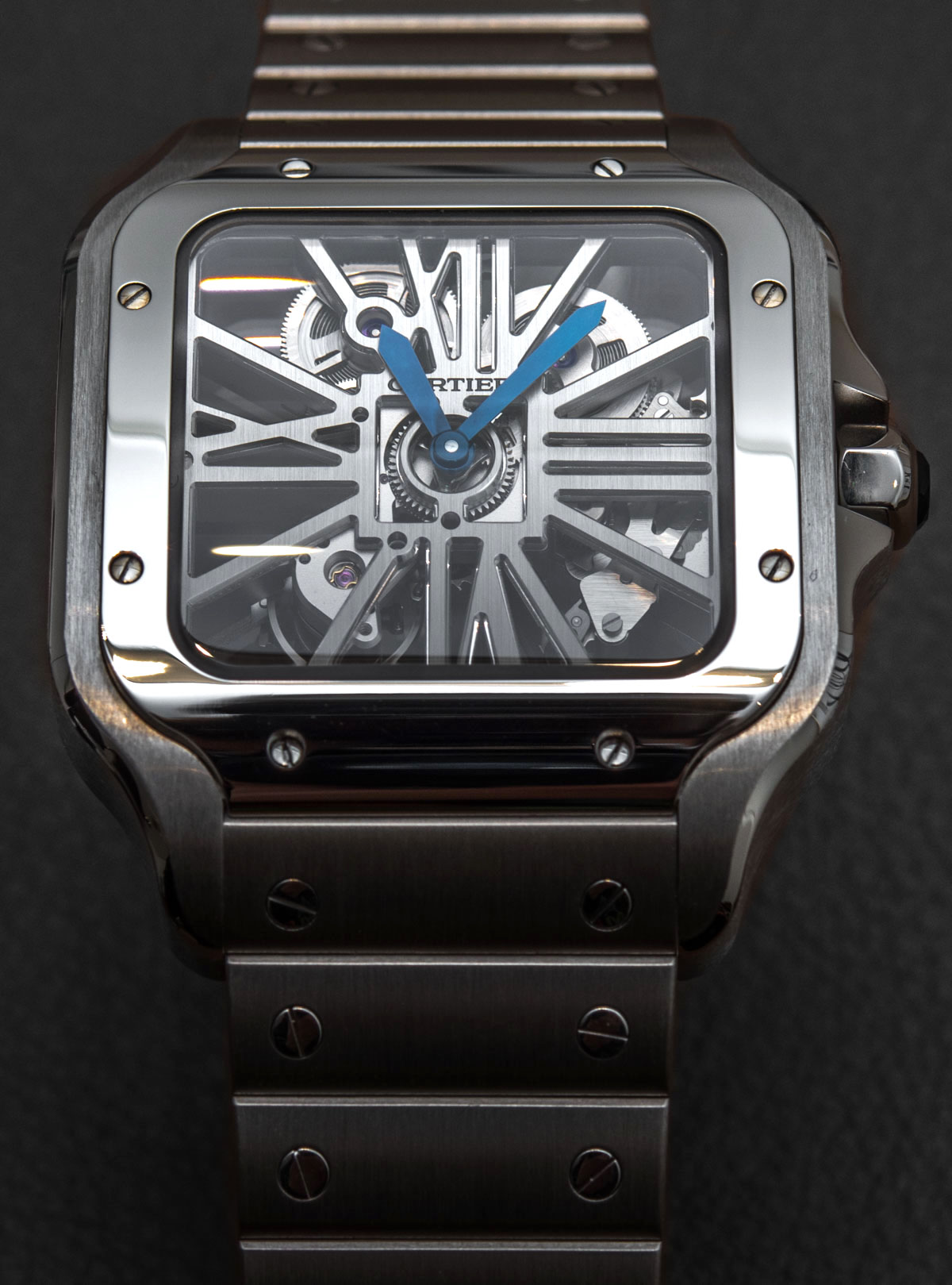 Is a bit under $27k far too much, or is it the bargain of the century for an extensively skeletonized, modern-sized Cartier men’s wristwatch in steel? When I look at the all-steel bracelet and case that is of identical refinement in the $6,900 “regular” Santos that was also introduced at SIHH 2018 along with this piece – and a host of other permutations to the Santos that we covered hands-on here – I think near-27 large ones is quite a stretch. However, when I look at the overall impact that the extensively skeletonized dial makes, I’m suddenly reminded of Cartier watches from recent times that fetched up to a few times (!) this much – and, in that respect, this is a rather unexpected undercut on those. Oh, for the record, the piece debuted with a price tag of $25,300 but is now listed for $26,800. Maybe it’s just me, but somehow ~$25k sounds much more competitive than $27k. 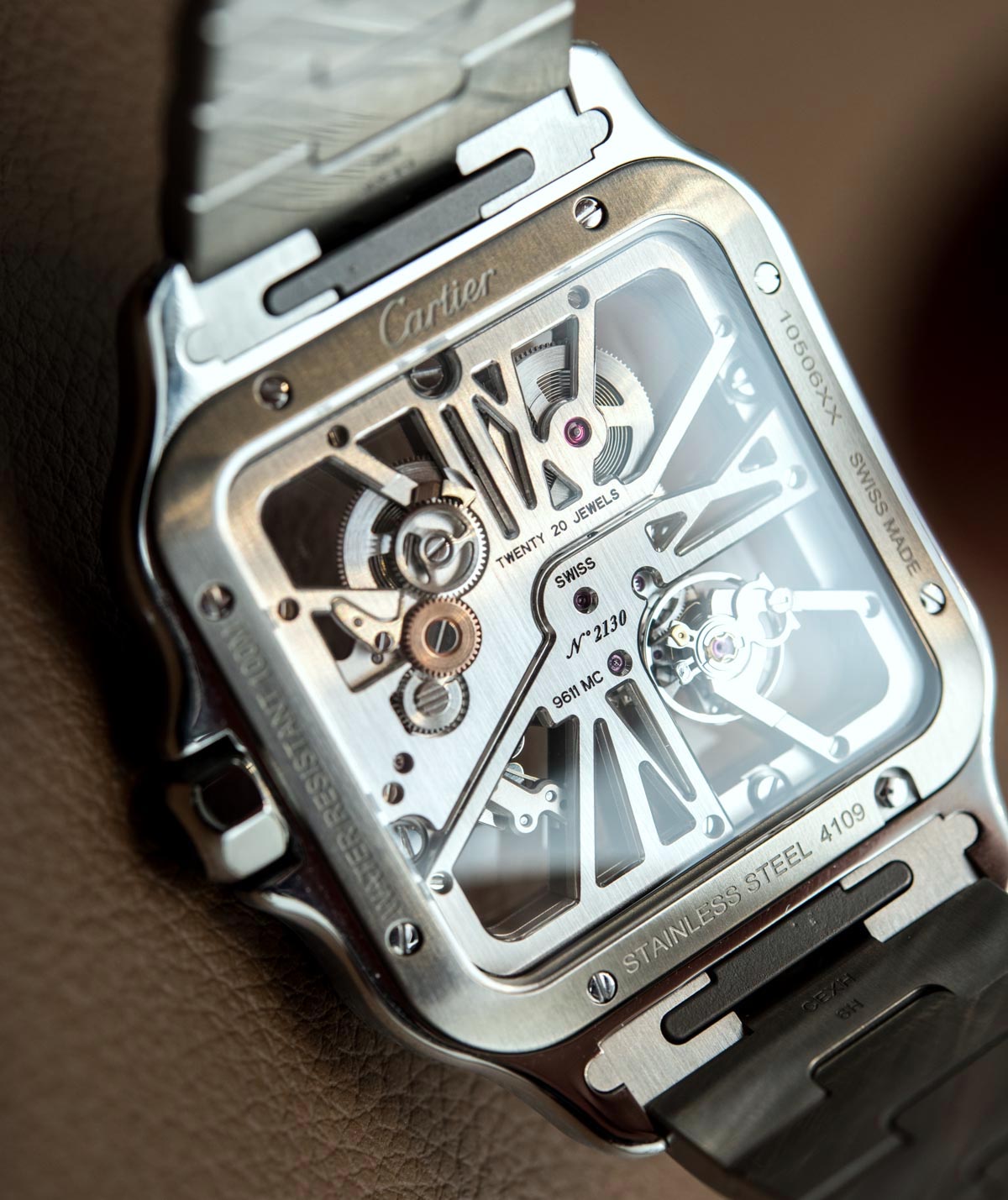 So what’s with this new piece? It has to be said that such a watch is not something you see everyday from brands of Cartier-magnitude – and when they do show up, they do so with a high-five-figure price tag and a low double-digit limited edition run. Cartier apparently realized its in-house potential when it comes to producing plates and bridges and went berserk with one of its established hand-wound calibers. Cartier didn’t say this but then again they didn’t have to, because I had the gut instinct that this by every chance will not be an all-new movement but rather, a hollowed-out take on one of its already existing calibers – one of many clever moves to keep costs and the final price down. 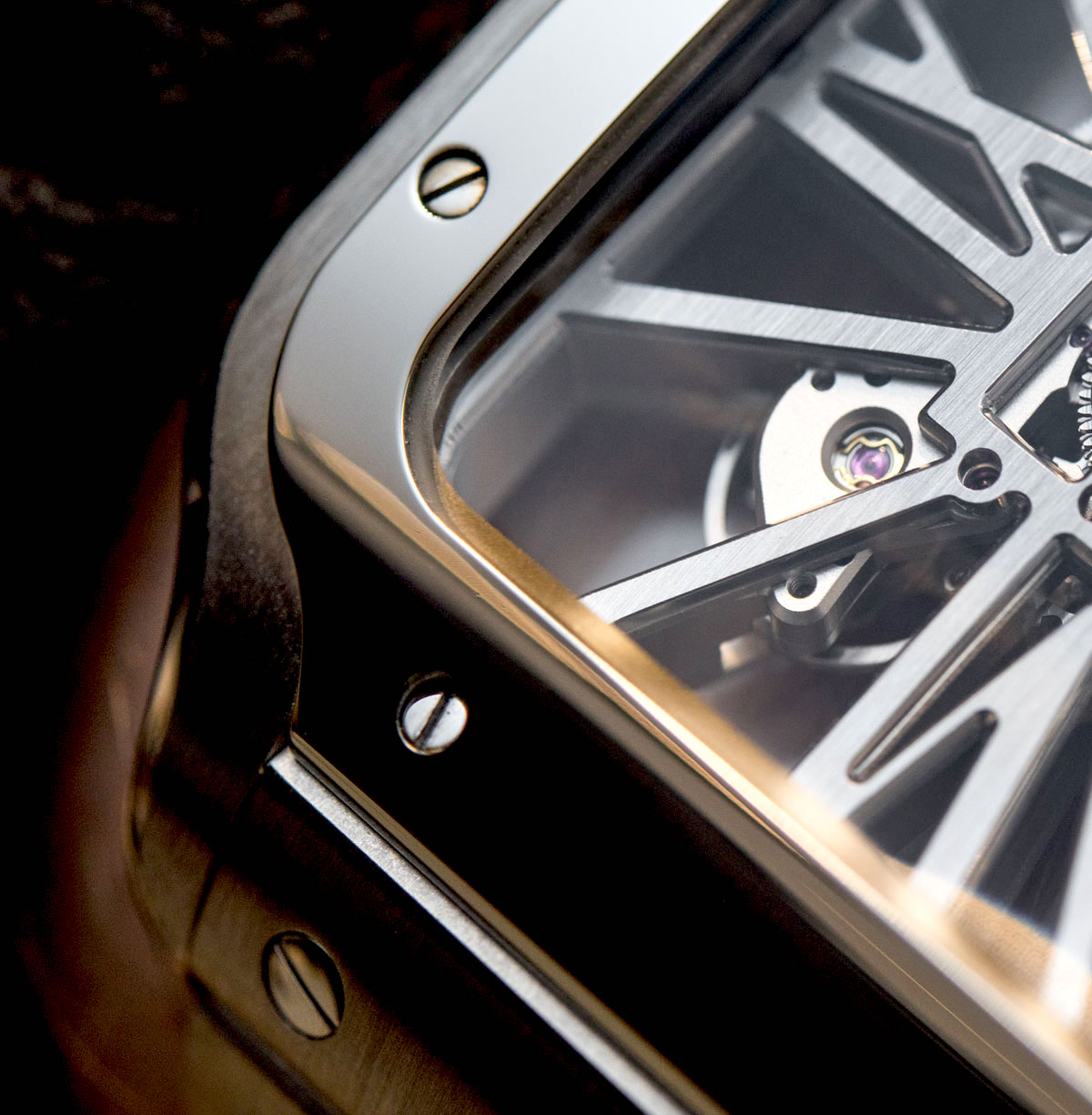 As such, I found the 9611 MC Cartier caliber in the steel Cartier Santos De Cartier Skeleton to be based on the 96xx MC family of movements (I had no idea what this caliber was called until just now, but the layout of the bridges and skeletonization was telling me this must indeed be based on something pre-existing). Just look at the 9602 MC and you’ll see the very same layout of keyless works, gear train, jewels, screws, and so on – although that particular movement has a big date feature fitted onto its dial side, the caseback looks identical. 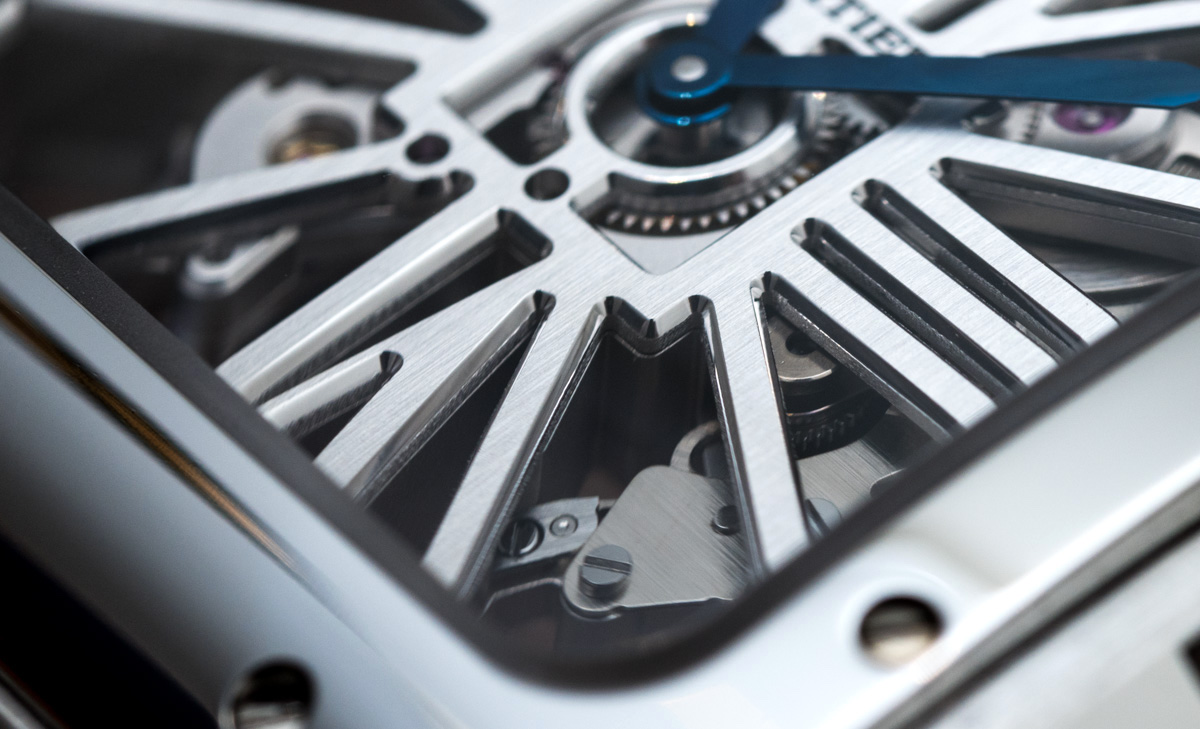 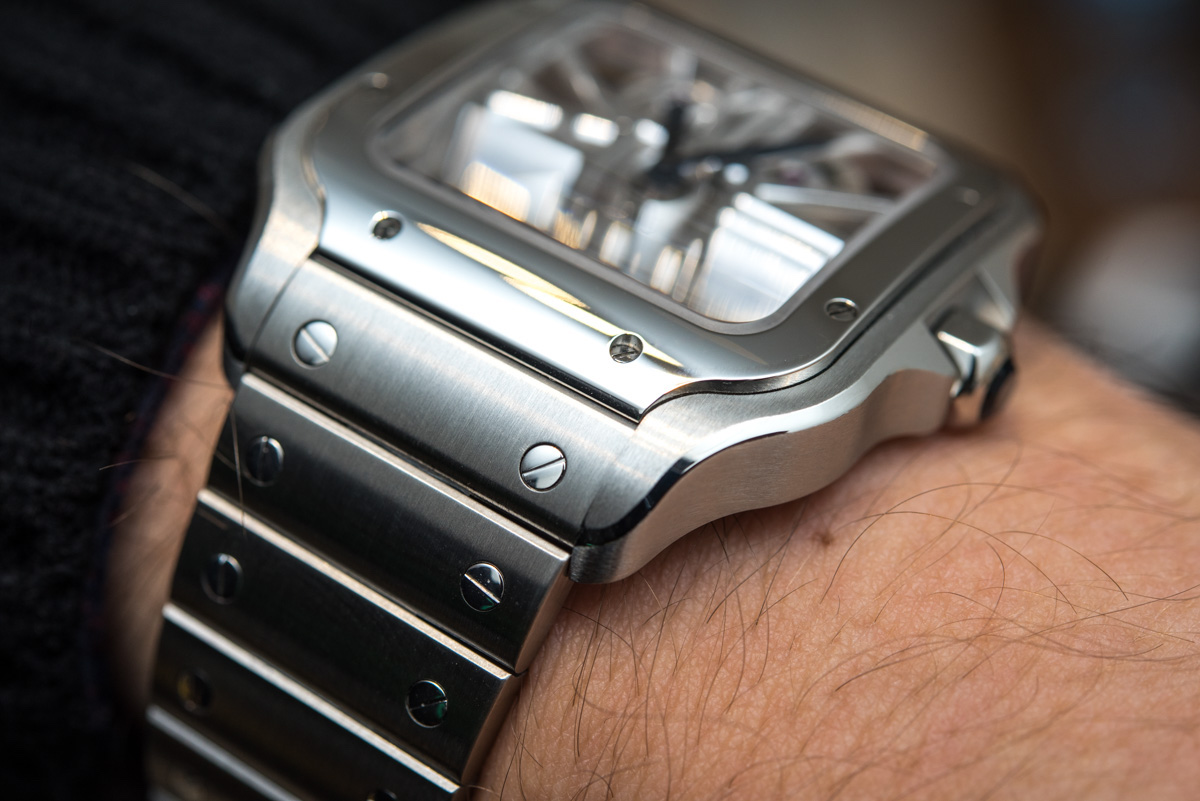 The curved front crystal does not provide the greatest viewing experience. I found it distorts or just simply isn’t sharp when viewed from some angles – and not because of its curved shape, but rather its overall quality that doesn’t provide as crisp a view as some other watches like, for example, Grand Seikos do. Having shot over 70,000 watch images with the same camera and lens setup (and many thousands more on a previous camera) I can at this point tell when I screw something up in my photography and when it is the crystal that just isn’t as good as it could be. 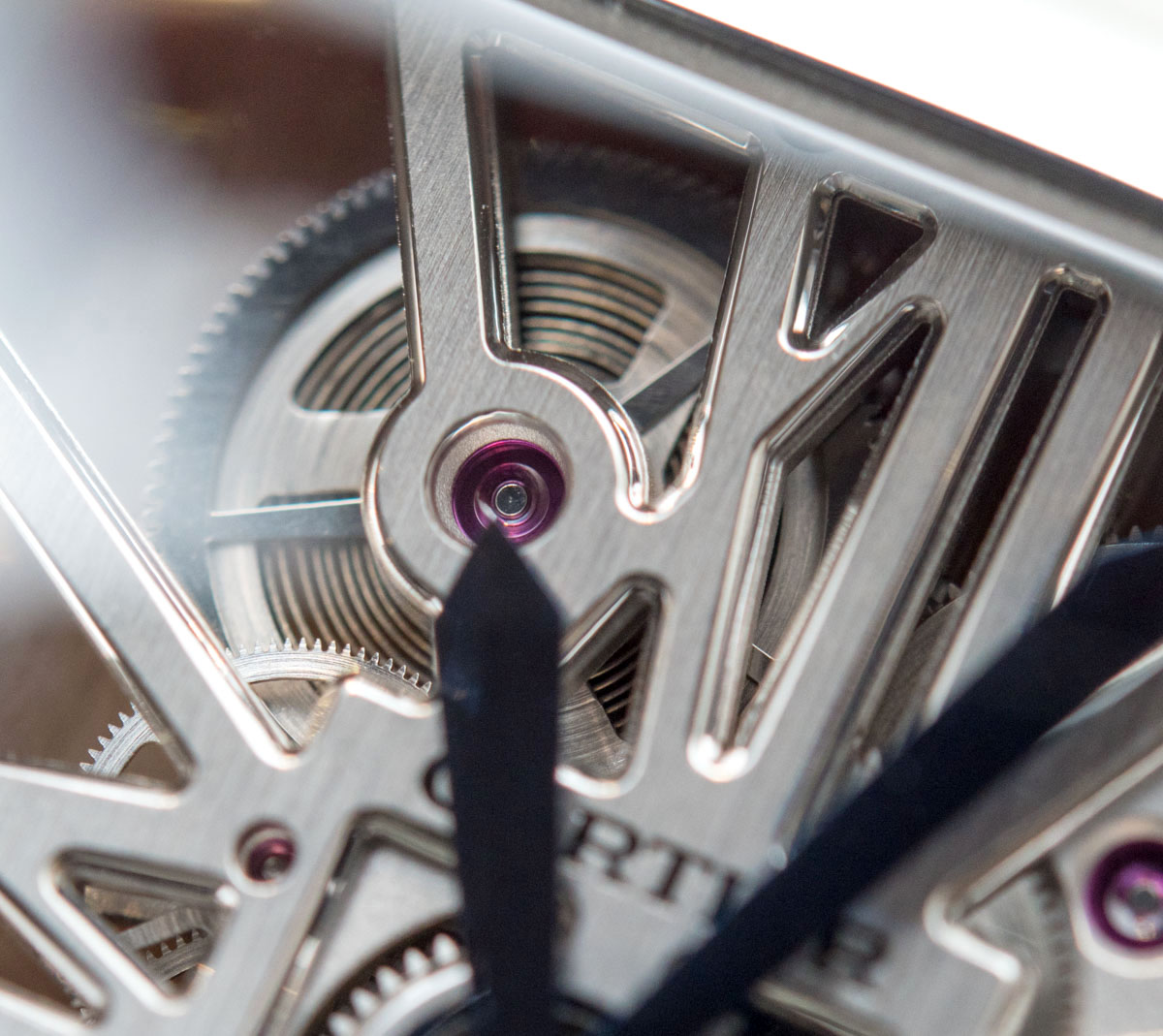 The finishing gets better the closer you get. That’s because the first impression from afar is that of a machined look, with the extensive brushed surfaces and the industrial ambiance enforced by the grey wheels and gears and springs that peek back at you from within. The anglage however is nicely done, even if that too has an unmistakably machined look. If these are done by hand, then Cartier has to accept my apologies – and perhaps invite us to visit the manufacture and see how these are done over there… Because if I follow the shiny lines along the edges of the plates what I see is a CNC machine running along them – and not a craftsman sitting there with a tiny tool hand-polishing these edges. It has to be said though, that even on very high-end pieces from some very high-end brands (large or otherwise), anglage is pre-done by the extremely capable CNC machines that are becoming more and more omnipresent in the industry – and the edges are only to be touched up and polished. On ultra-high-end stuff is where you can expect sharp internal corners where the two edges come together into a point, unlike the round, CNC’ed corners that are visible on so many watches – including this one. 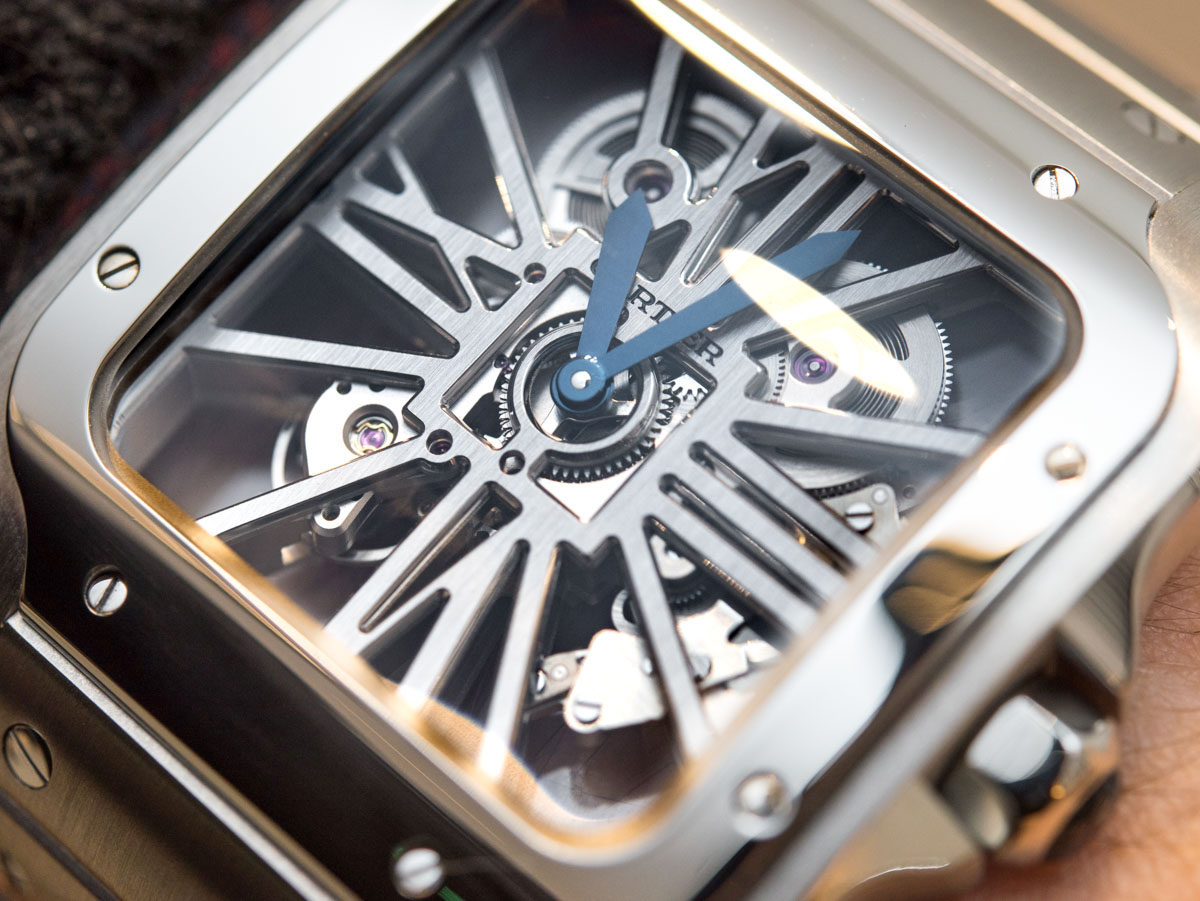 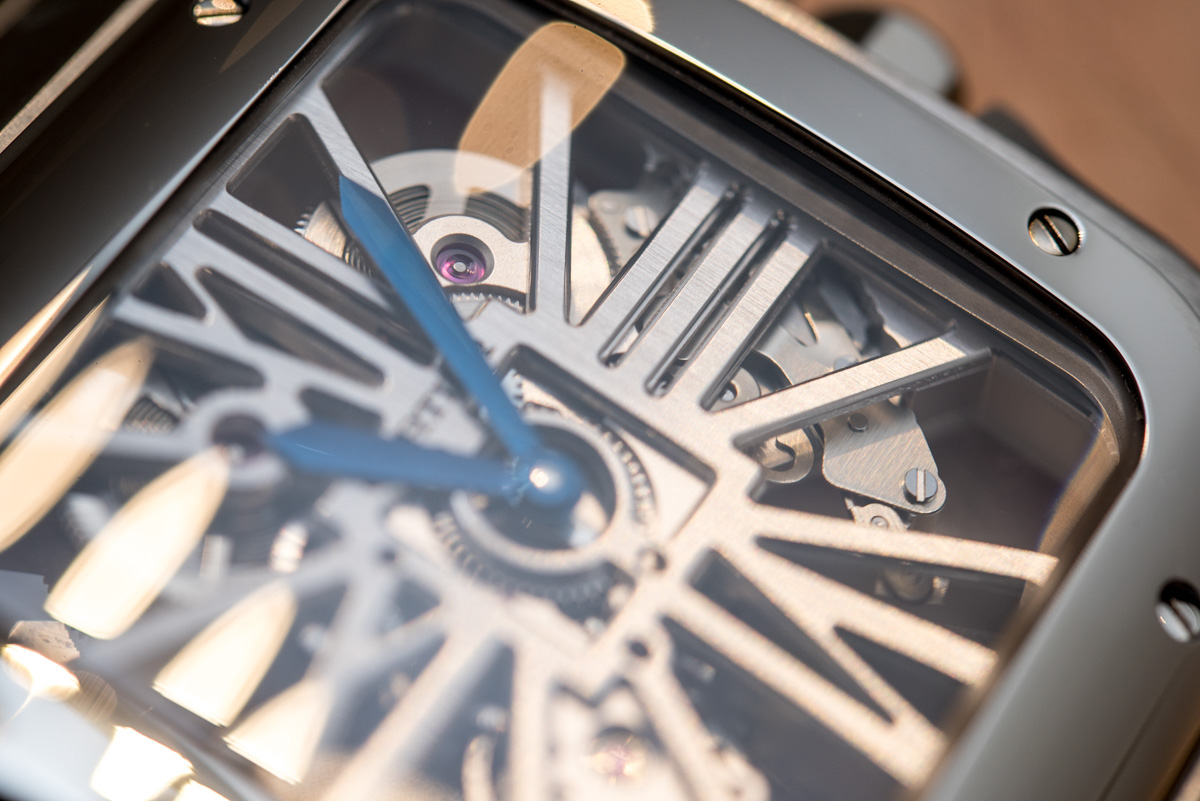 Two rather interesting details about the way the Cartier Santos De Cartier Skeleton is decorated include the way the brushed surfaces – and the entire dial side, for that matter – reflect the color of ambient light. This is phenomenon is not a new one, of course, but to the extent to which it is noticeable here is worth mentioning; as you’ll see for yourself in the two images above. One piece that really stood out for me as undesirable, and I guess I am splitting hairs here, is the tiny cam between the 4 and 5 o’clock indices – to the right-hand side of the dial on the image above. I understand it’s challenging to make such tiny and fragile pieces look good, but here it really contrasts strongly against the impressive volume of the cut-out indices and plates.