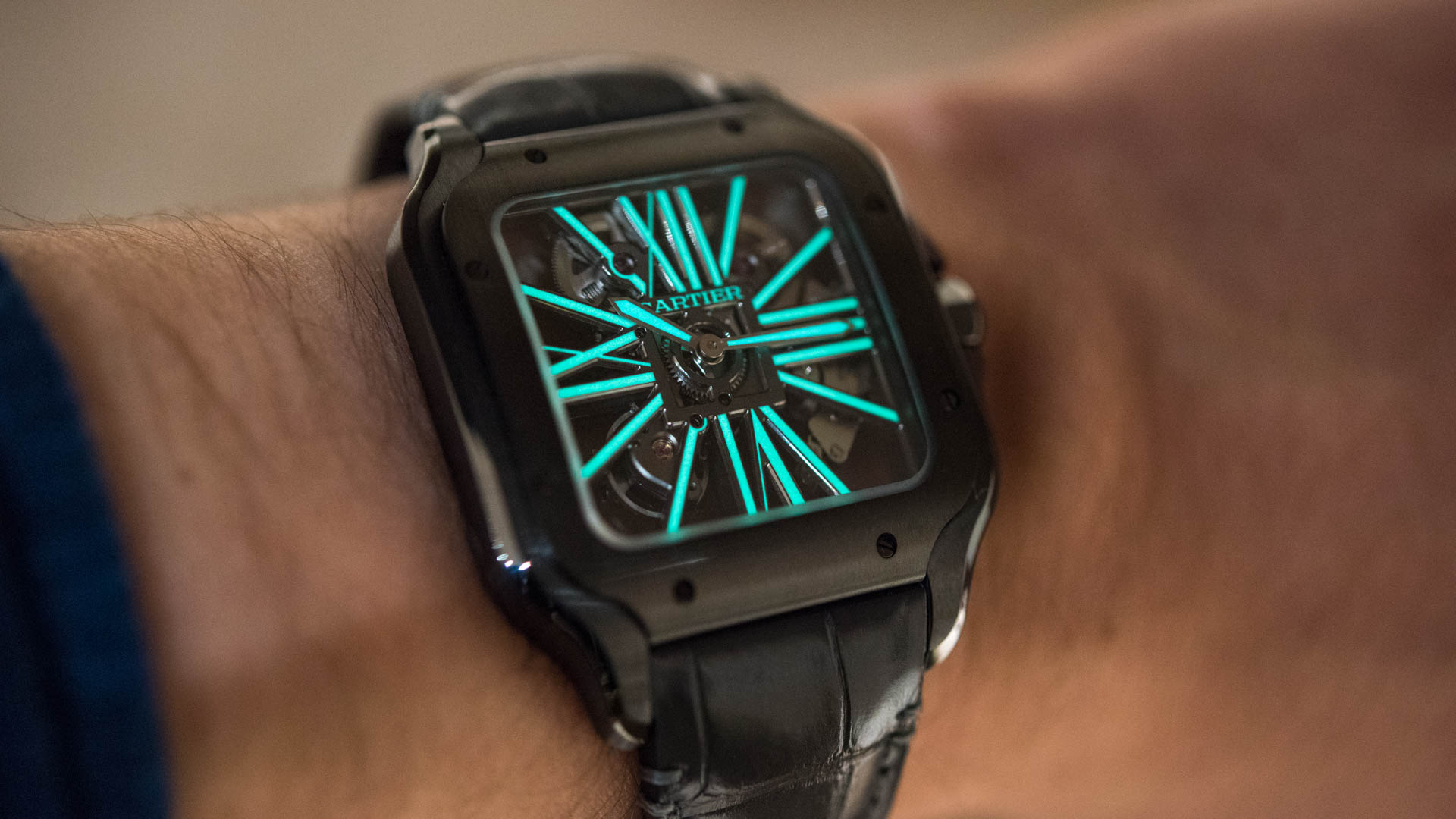 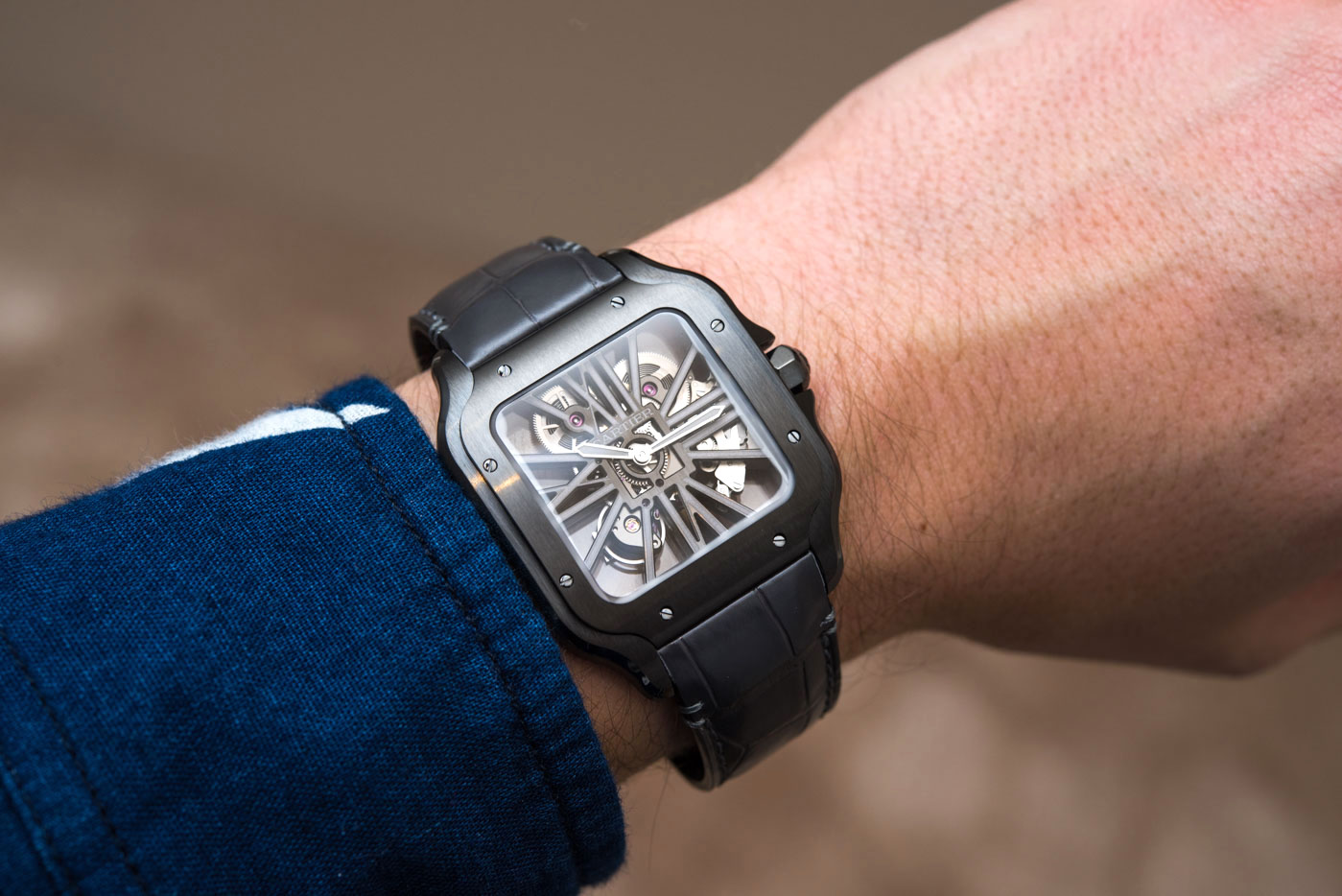 Launched at SIHH 2019, the Cartier Santos Skeleton ADLC “Noctambule” is among the very, very few genuinely new watches of the fair, which I reckon has at least a long shot at raising the pulse of watch-lovers. So many regurgitations, misses, and/or flat-out unattainably priced watches have been launched that the humbly sized, yet boldly styled “Night Owl” could really make a case for itself — were it not for its pricing. There’s always got to be a catch, right? 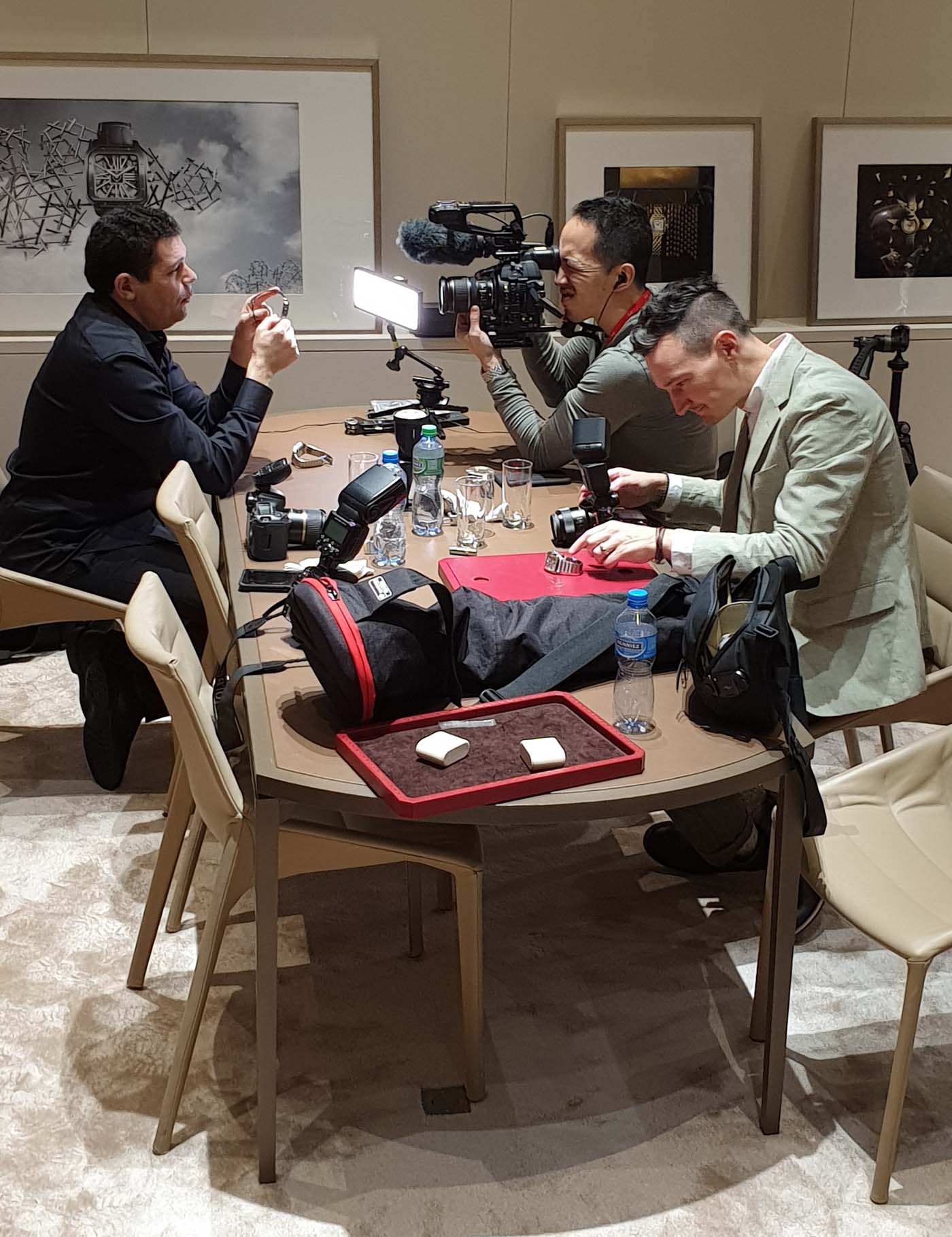 Images by David Bredan, except where noted otherwise.

When our meeting with Cartier started — in one of the seldom-encountered, aptly sized and well-lit rooms of the fair, with plenty of pieces for us to photograph and check out — it was the Noctambule that both Zach and I first reached for, while Ariel was quickly growing fond of the new Santos Chronograph (hands-on here). We started taking photographs, charging the lume, and appreciating the smaller size compared to last year’s skeleton Santos, when Cartier dropped the bomb: pricing is expected to be €21,000, around $24,000 USD when the piece is launched in June, 2019.

We don’t normally highlight prices so early on in our articles because it is on everyone to decide whether a piece is in their price range, or not — but this watch, I feel, could do a lot more damage in a sensible price category. Anyhow, more on pricing and how the Noctambule stacks up against other Cartier pieces in the closing of this article. For now, here is all that is to be known about it, for those ready to shell out this much. 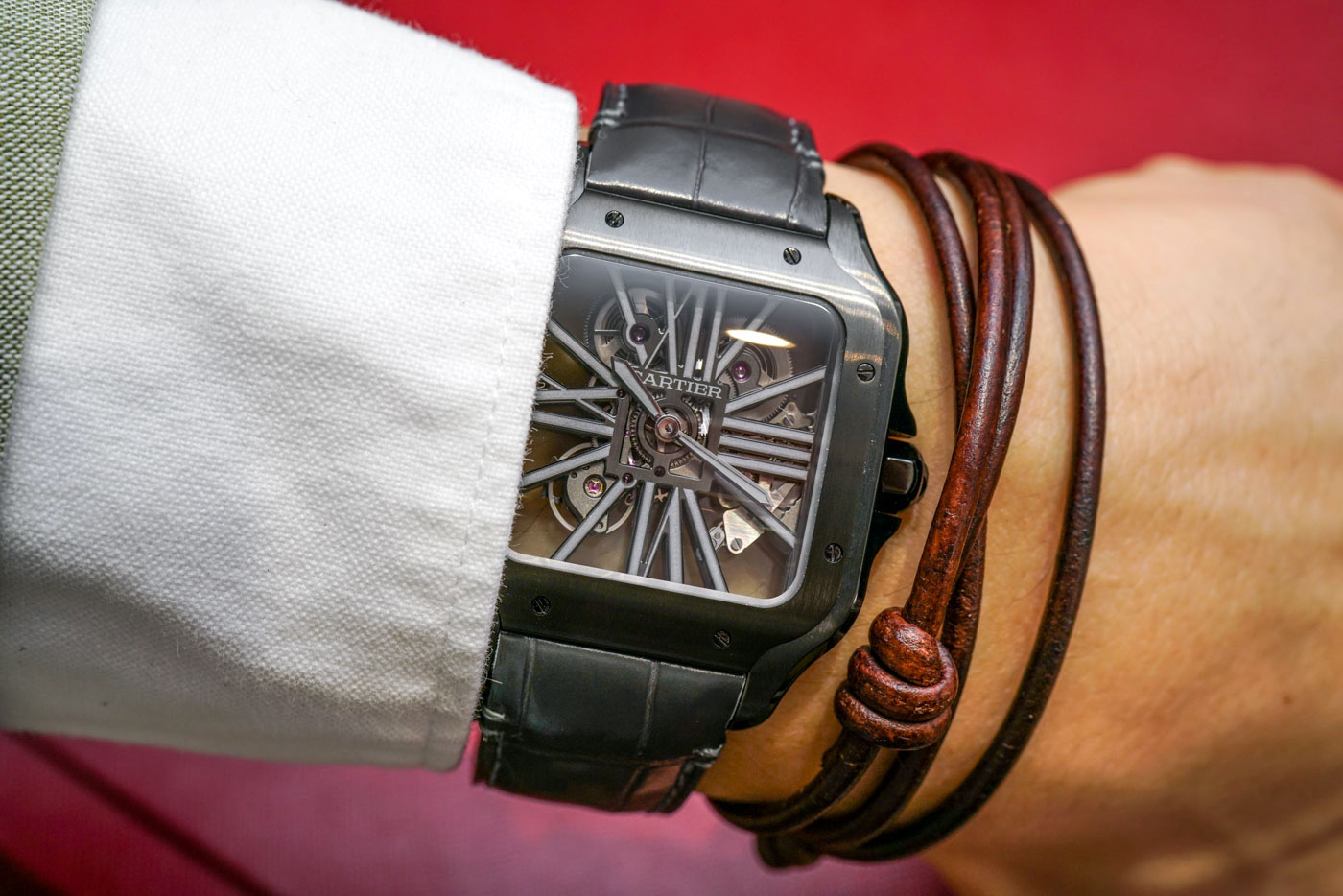 While last year’s steel skeleton Santos was an “Extra Large” model (as Cartier likes to call it), for 2019, the Noctambule comes in a “Large” size. This means a 39.8mm-diameter and a 47.5mm lug-to-lug size — kudos to Cartier for providing the latter measurement, as that is what truly matters in terms of wearability. For reference, a 40mm Rolex Submariner has an almost identical lug-to-lug size. Case thickness on the Noctambule is 9.8 mm, thanks in part to the curved profile of the Santos case.

Overall wearability, then, is much improved over the Large model for, I would say, everyone with a wrist circumference under 7.5 inches. The Large case not only looks better, but it feels better, too. A pleasant surprise was the steel case’s 100-meter water resistance, something often gracefully omitted from skeletonized or otherwise “refined” timepieces. I have said this many times before, and I’ll say it again: every luxury watch without a minute repeater should sport at least 100 meters of water resistance — anything under is cutting corners, as far as I’m concerned. 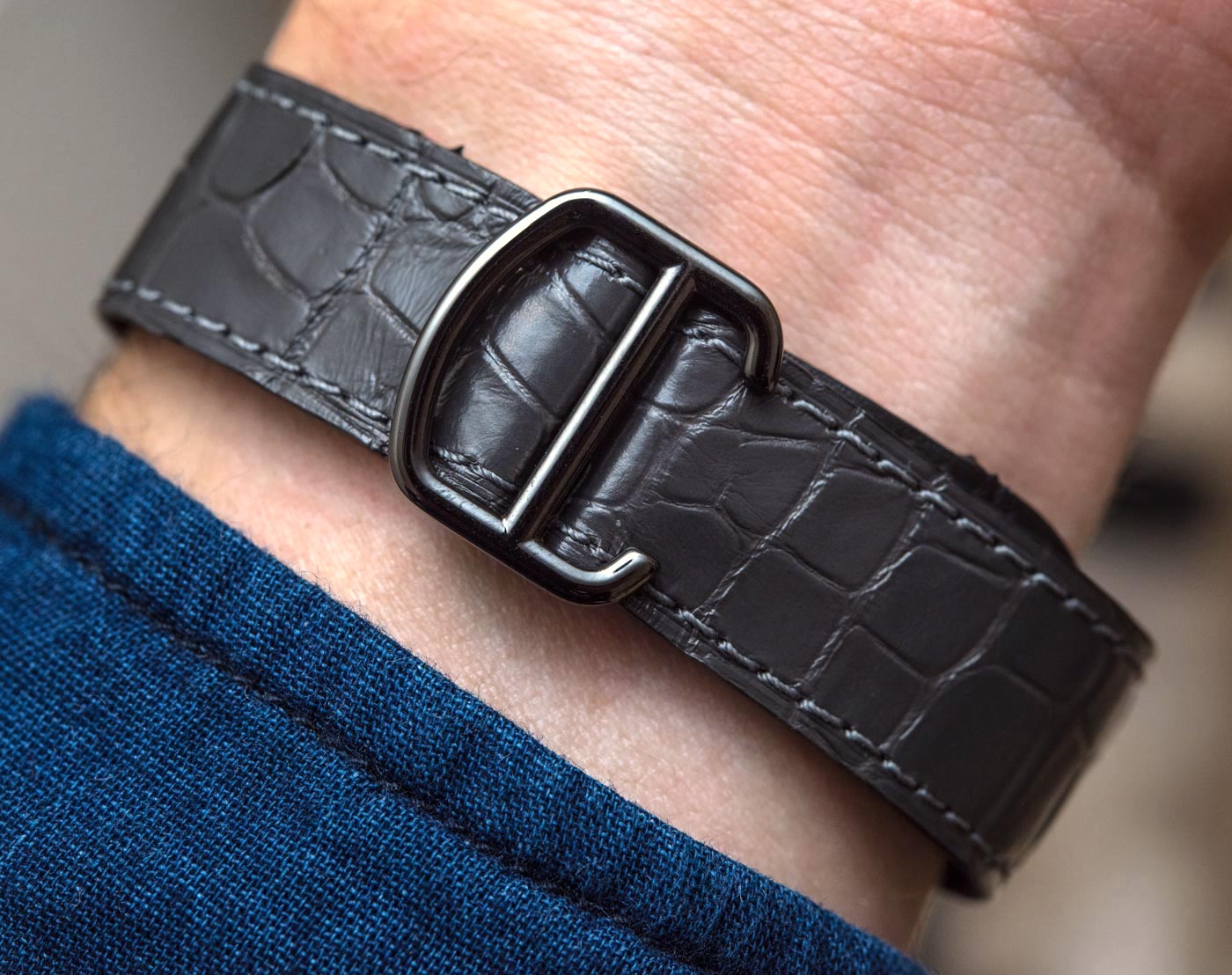 The Cartier Santos Skeleton ADLC Noctambule comes with the recently launched Cartier QuickSwitch easy strap changing system; a short video presentation is embedded just above. For most watches Cartier fits with QuickSwitch, it also packs an extra strap in the box — just so the owner can actually put the system to use, a nice gesture. Funny enough, despite the 100-meter water resistance, the Noctambule does not come with a rubber strap, rather, it is supplied with a black and —check this out — a gray alligator leather strap. A greater puzzle than that, though, is the folding clasp, which was awfully difficult to close and a pain to set up (though the latter you hopefully need not do often). Closing it securely should, in my opinion, be a lot more comfortable and easy to perform. These are not the product aspects in which you would expect a brand like Cartier to fall short. 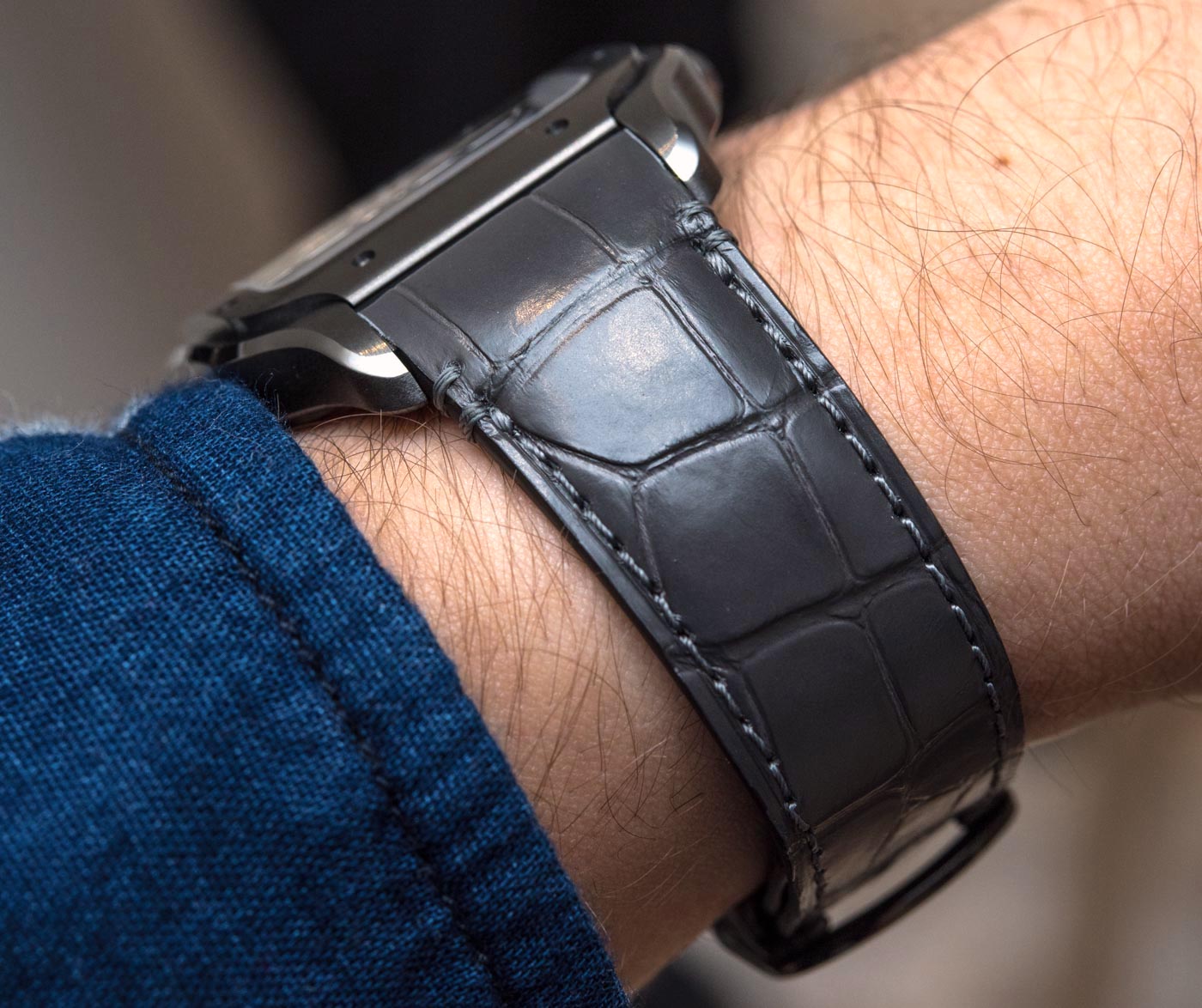 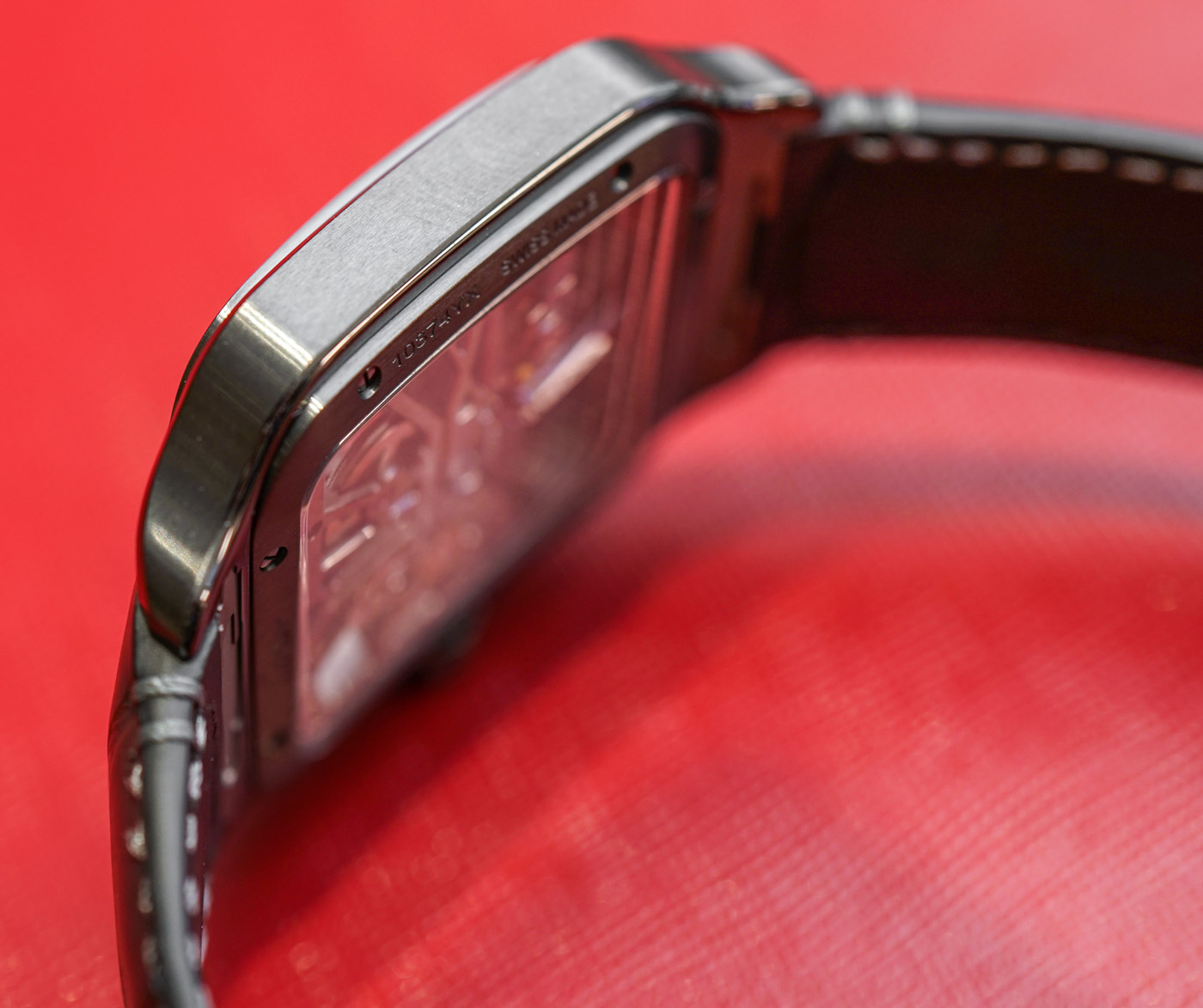 The three-piece case is crafted from stainless steel that Cartier had ADLC coated – that is Amorphous Diamond-Like Carbon, claimed, and generally accepted, to be a lot more resistant to scratches than traditional PVD coatings, which do tend to scratch if you look at them the wrong way. How well the ADLC fairs, in the long run, is something I am looking forward to testing out sometime in the future. What I can already appreciate about the Santos Skeleton ADLC Noctambule’s exterior is how the alternating surface treatments have been executed: a deep, glossy, black polished line runs along the upper profile of the Santos case, while the side, as well as the top of the case exhibits well-defined brushed surfaces. The massive crown guards are a fun element on a skeletonized watch, and so is the black crown set with a blue spinel. 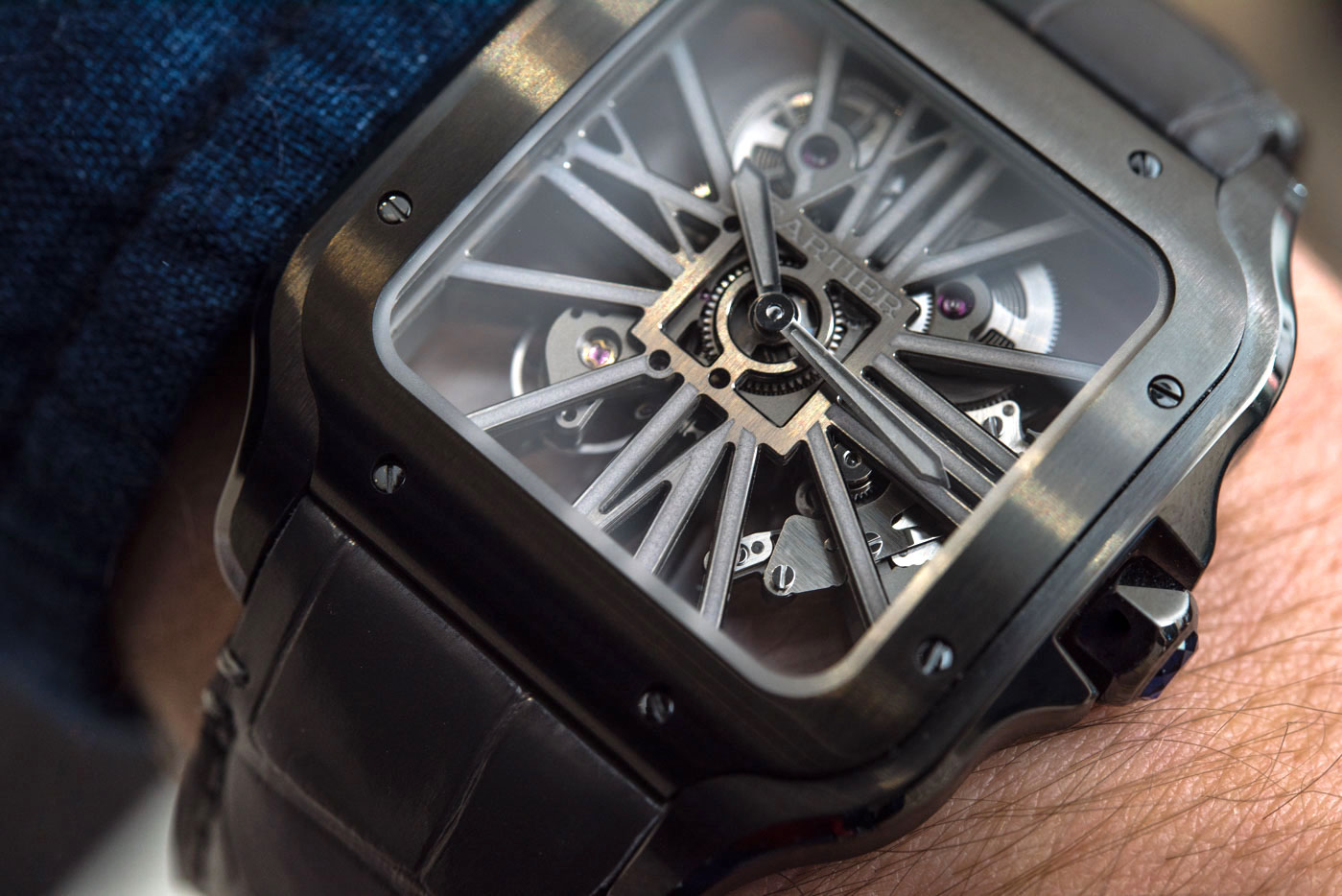 The front is covered by a distinctly domed sapphire crystal. If Grand Seiko calls their crystals “High Definition” (which they do), then this particular piece is the opposite of that. I was wondering why I struggled with taking a super-crisp image of the details of the movement until I realized it was not my trusted D810 and its 60mm macro lens that was letting me down. No, rather it was the crystal that I believe has a different curvature on its outside, as it does on its inside. Anyhow, the overall outcome is a slightly, but noticeably distorted, view that I think could be better. 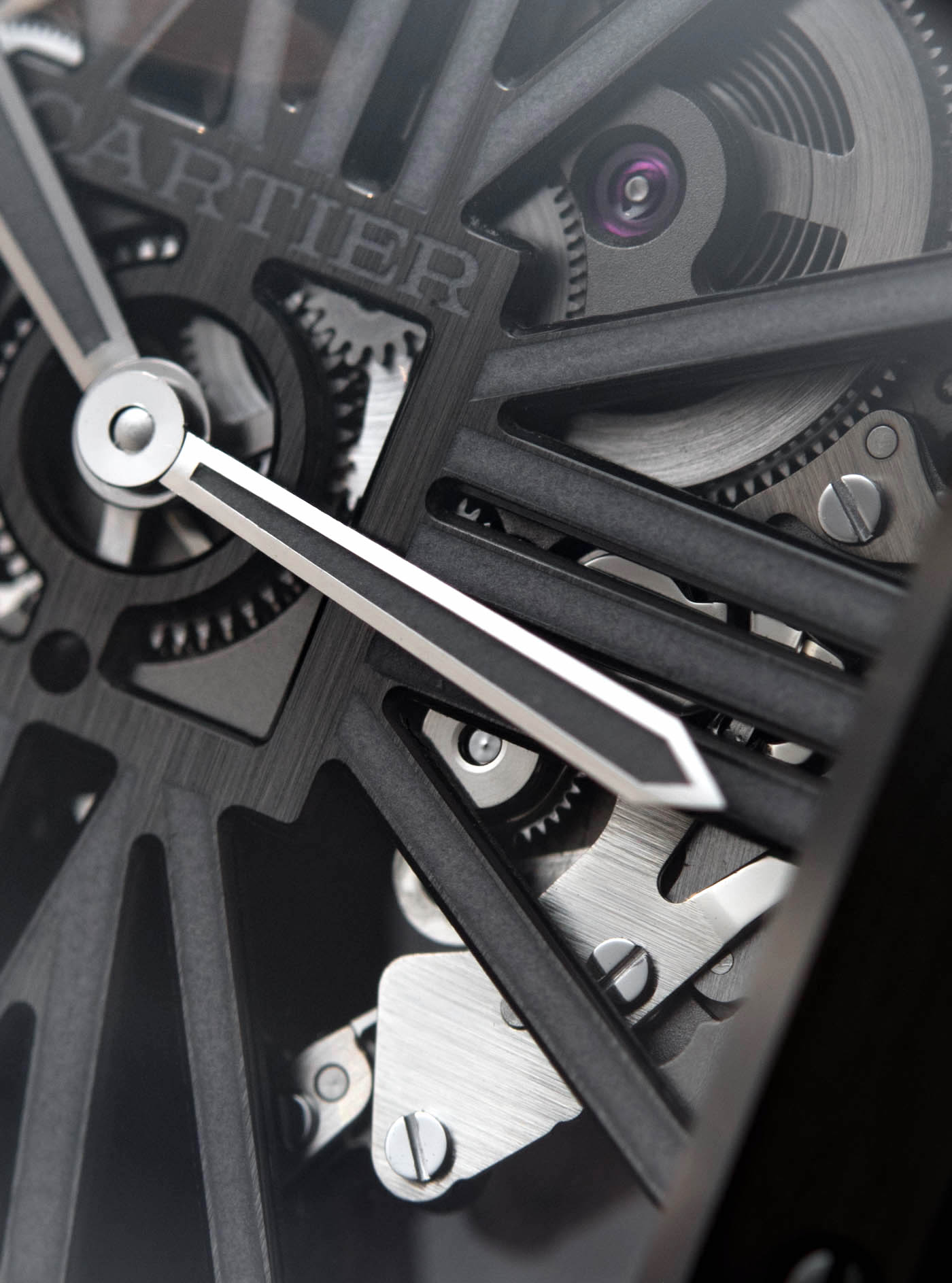 The hands, Cartier says, are steel sword hands, and that sounds as cool as it looks. They have bright polished edges with black luminescent material in their center — more on that in a moment. Their backdrop, namely the plates and bridges of the Cartier Calibre 9612 MC, have been thoroughly skeletonized, relieving them of every bit of disposable material, leaving just the massive, typical-Cartier Roman numerals intact. The center of the dial, as well as the very thin edges of the numerals, is vertically brushed, surely a pain to execute with such refinement. That said, the overall skeletonization, as well as the movement, itself, has a distinct machined look to it — arguably further enforced by the blacked-out, high-tech design. This is more of a taste thing, perhaps, than an objective criticism, but I do find the complete result to be somewhat lacking. 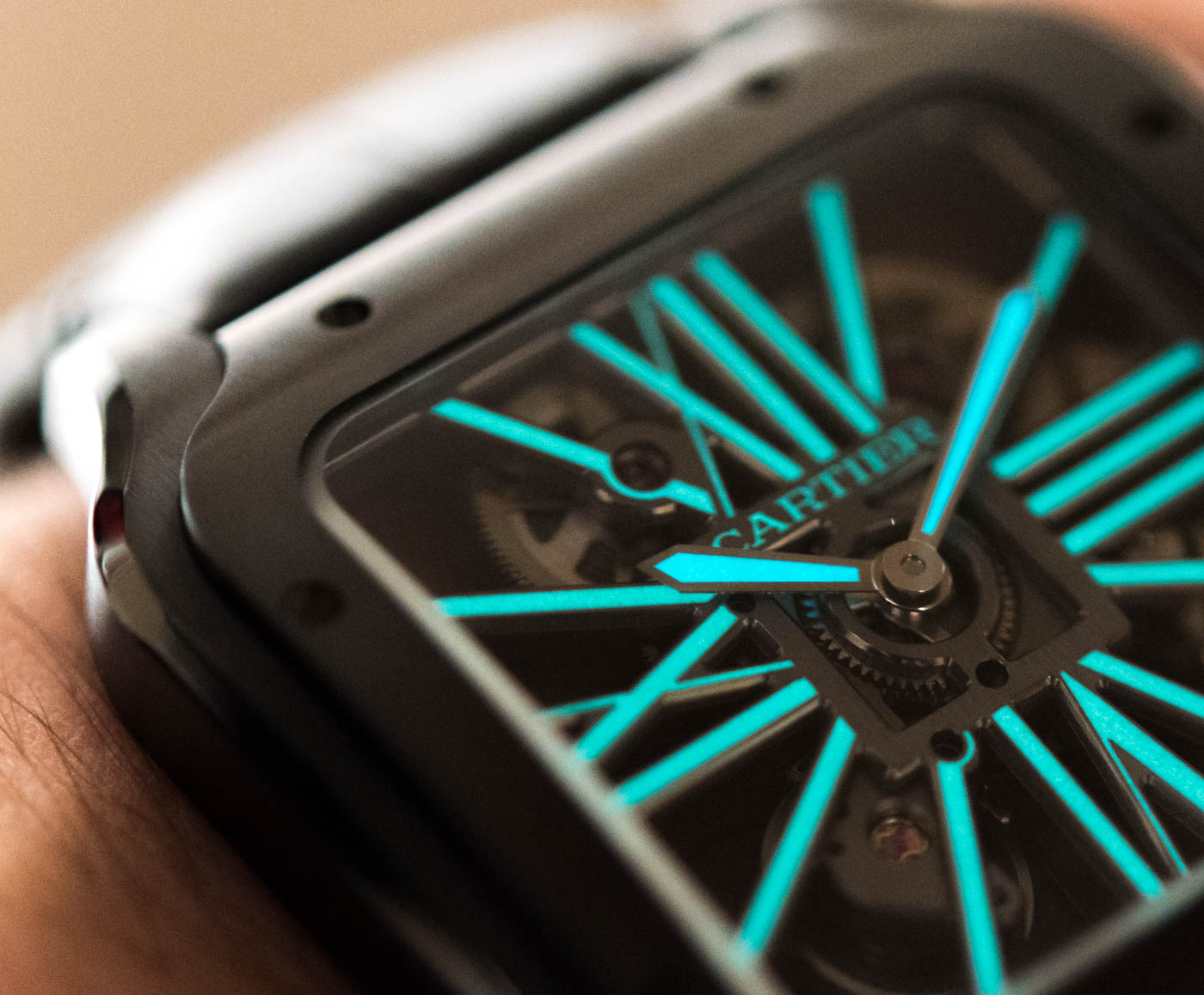 I dare not speak for Cartier here, but they evidently made an effort to spice up the Santos Skeleton ADLC Noctambule by lighting up the upper bridges of the watch. It takes a very powerful light source (camera flash, UV torch, etc.) to charge the black Super-LumiNova of the Noctambule, but once you manage, it glows with a relatively bright blueish-green hue. Black lume is scarcely used because it is among the darkest-glowing luminescent materials with the shortest glow times — but this not being a professional diver watch, or a watch designed for other nonsensical use scenarios, I presume most will humor the use of black lume here. 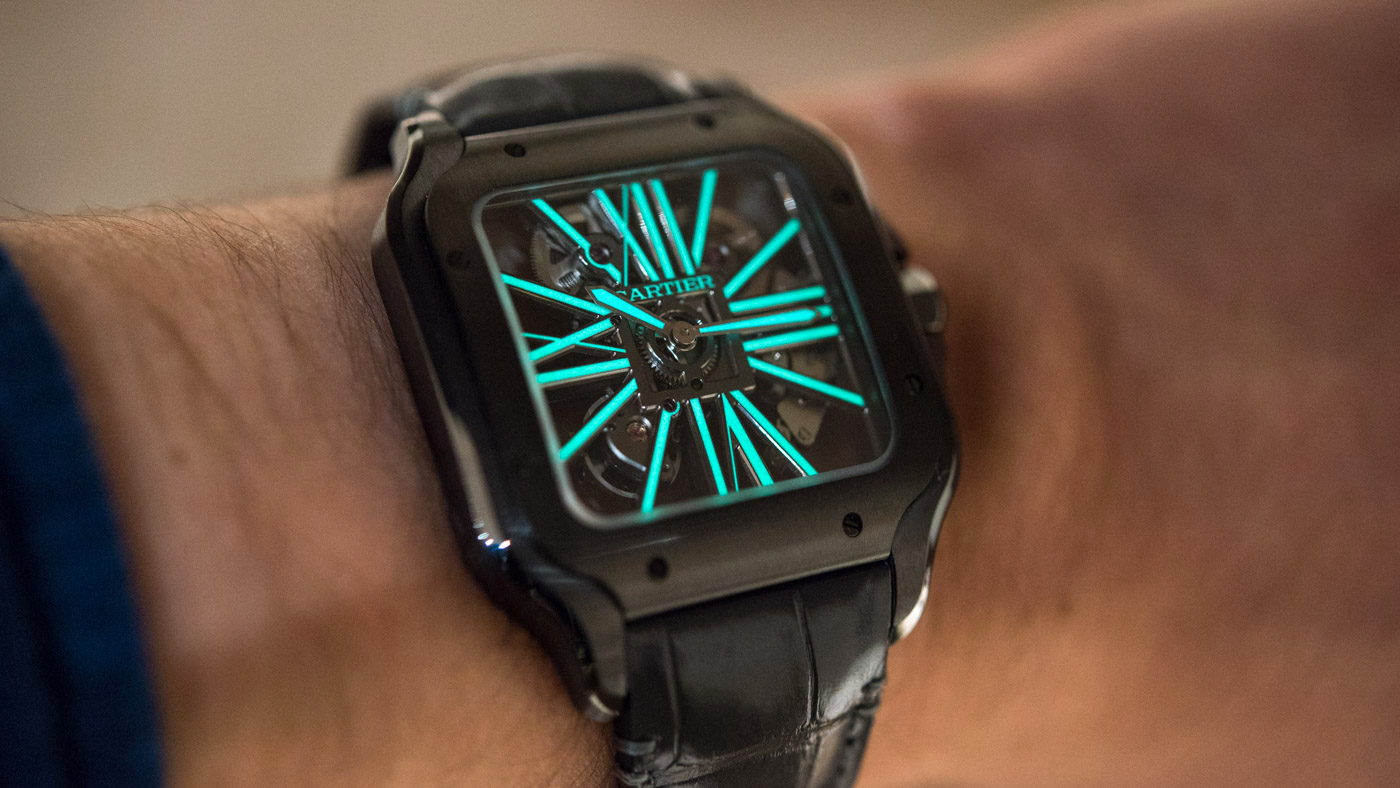 To see a Cartier glow like this, highlighting its skeletonized Roman numerals over a hand-wound, mechanical movement… This is enough to move even the most faded watch lover, surely! What I am trying to say is that I applaud, and greatly appreciate, Cartier doing something like this: it is an objectively bold-looking watch that is both elegant and technically interesting, while packing a “feature” that people can actually appreciate and enjoy on a daily basis — unlike, say, a perpetual calendar, that is fascinating a grand total of five times per year, for a few hours at a time, as it switches at midnight at the end of those five odd-length months in the year. Compared to that, the Noctambule is on another level on the “watch wearing fun experience chart,” if you ask me. 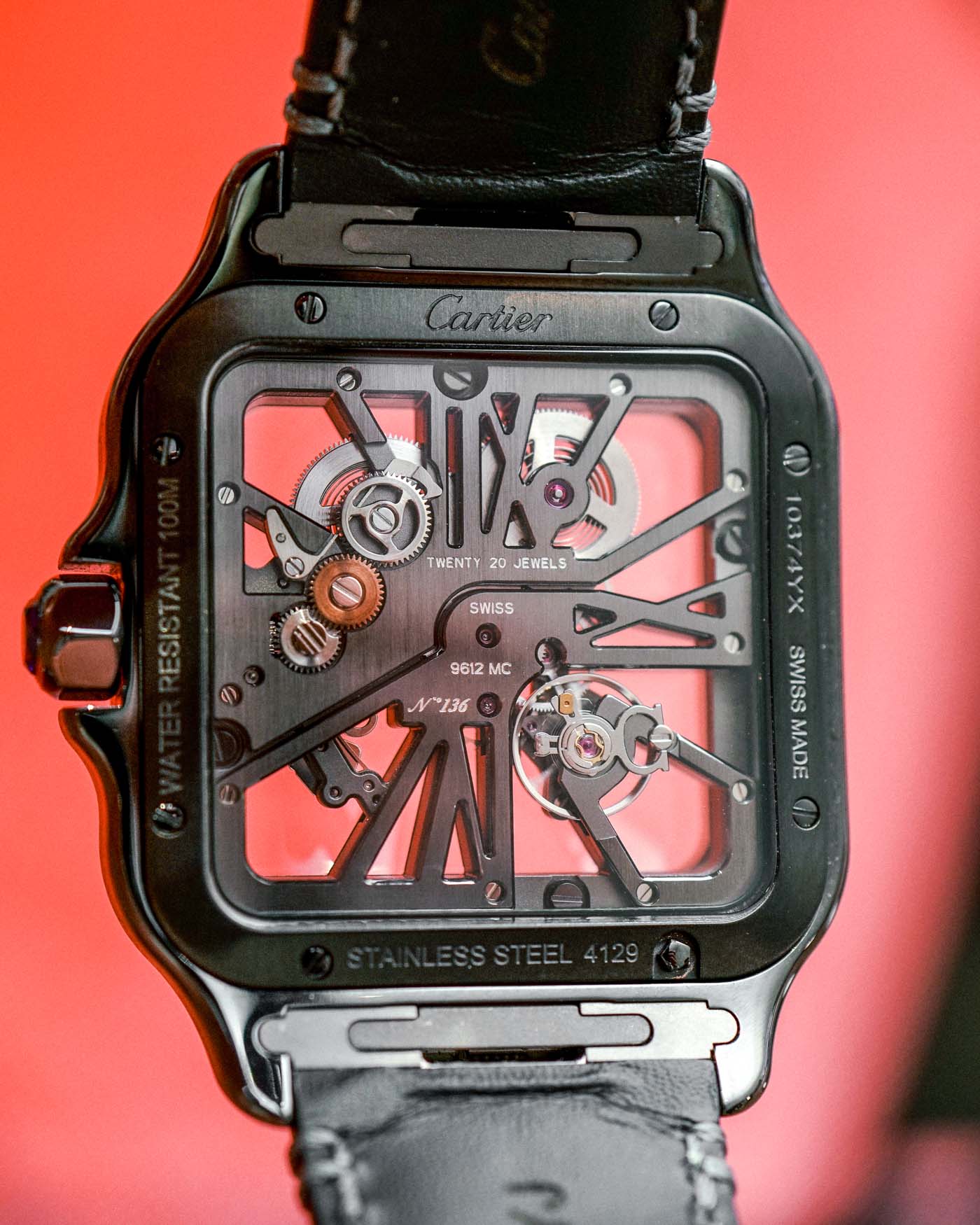 As far as the origin of the movement is considered, it is the same construction that I noticed in last year’s article. The 9612 MC Cartier caliber in the Cartier Santos De Cartier Skeleton ADLC “Noctambule” appears to be based on the 96xx MC family of Cartier movements. Just look at the regular 9602 MC and you’ll see the very same layout of keyless works, gear train, jewels, screws, and so on — although that particular movement has a big date feature fitted onto its dial side, the caseback looks identical.” 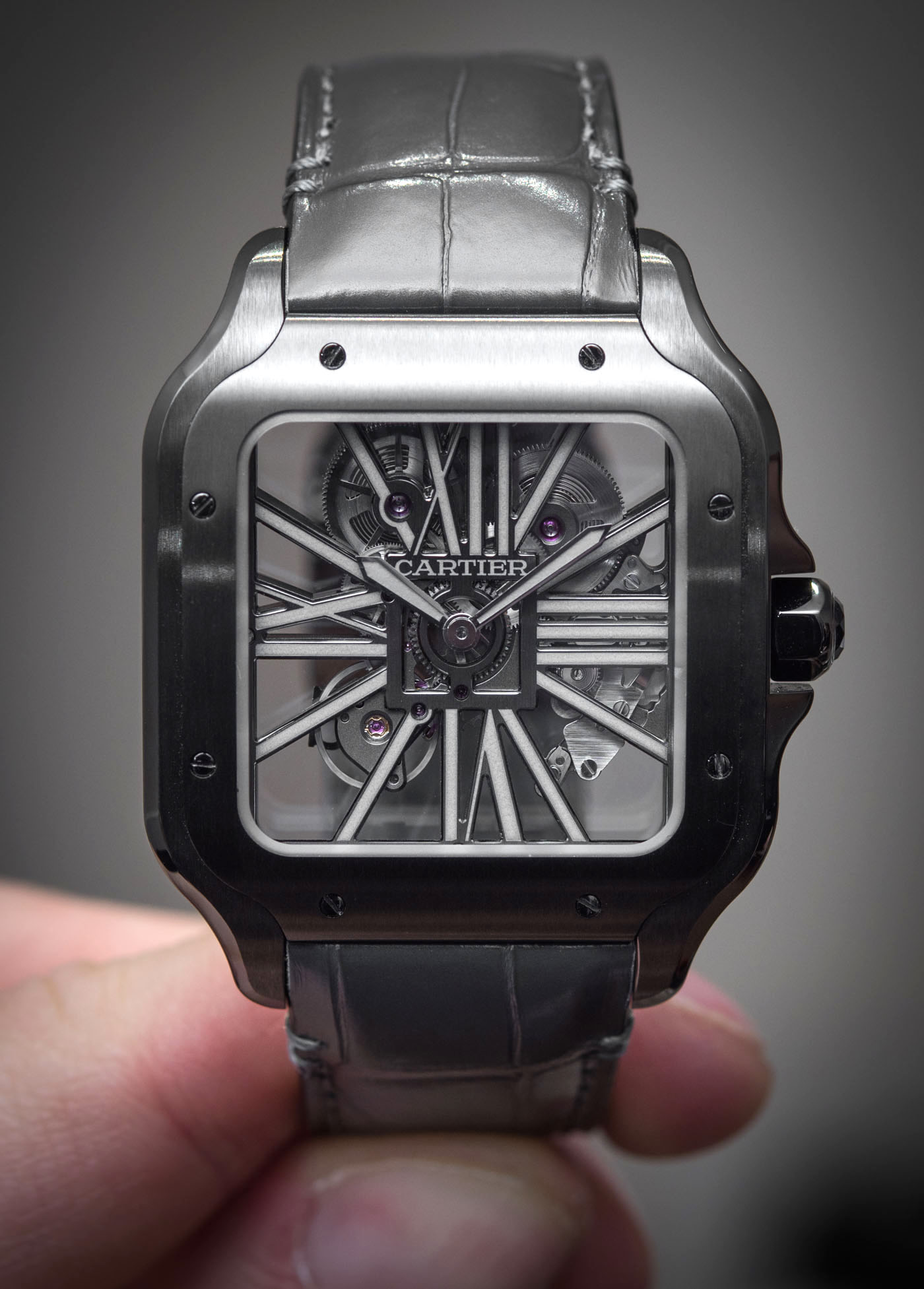 Last year, we covered hands-on Cartier’s first  more competitively priced skeleton with the Santos Skeleton in steel, on the new steel bracelet here. With that 2018 version retailing for just over $26,000, I rightfully regarded it as a very aggressively priced venture for a Cartier of such visual complexity. Before that, skeletonized Cartier pieces used to cost well north of $50,000; just look at this Clé Skeleton for $56,000, or this Crash Skeleton for $78,500. Both are fantastic-looking pieces but cost twice, or three times as much as does Santos — which is a lot more, even with their technical differences taken into account. 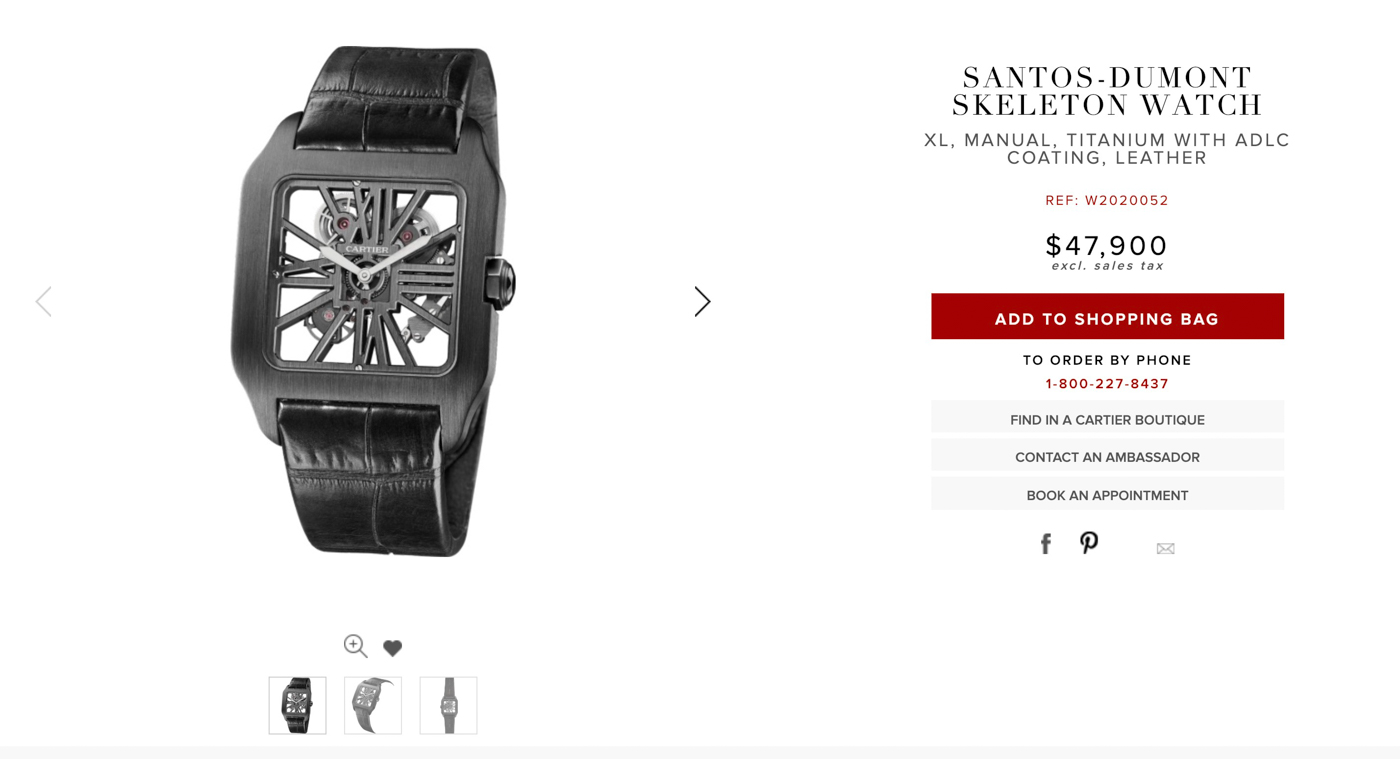 More to the point, anyone who shelled out $47,900 for this Santos-Dumont Skeleton from a few years back (still featured on the Cartier website), with basically the same movement and same overall design (albeit in titanium, rather than steel, whoop-dee-doo!) will surely be quite displeased with Cartier, as it has launched essentially the same watch for half as much. Ouch! 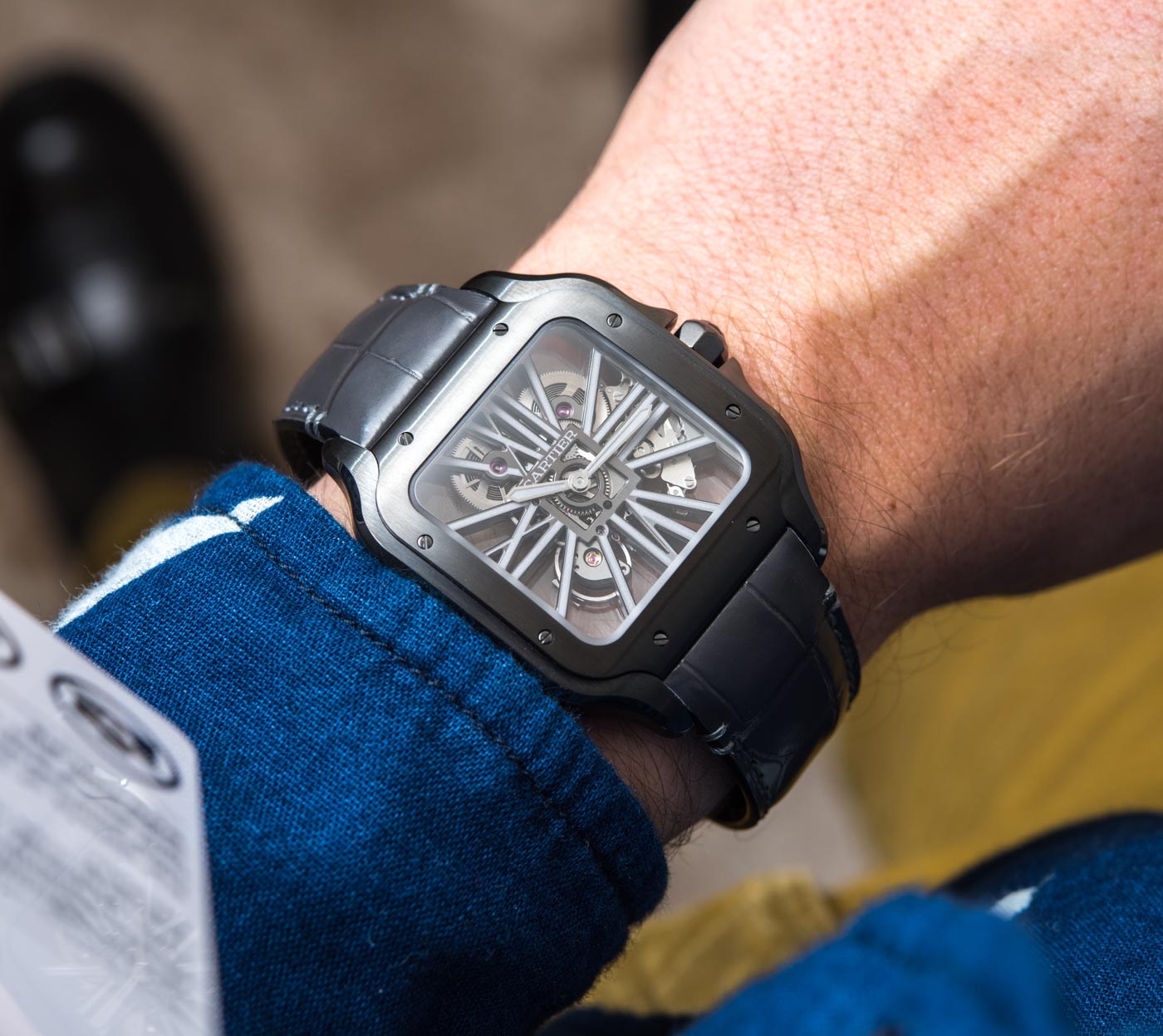 And yet, I somehow feel that the 24 large ones for this year’s Cartier Santos Skeleton ADLC “Noctambule” is still a bit too much. I say that because the question here is neither how it compares to other Cartier pieces, nor if the Noctambule is a fun piece. Rather, the question at hand is: is it $24,000 fun? That is for everyone to decide. Personally, I just don’t think it is.

The price for the Cartier Santos Skeleton ADLC “Noctambule” with its luminescent skeletonized caliber is €21,000 or around $24,000 USD, and it is expected to hit the boutiques in June, 2019. Find out more about it and other skeletonized Cartier watches on their website.