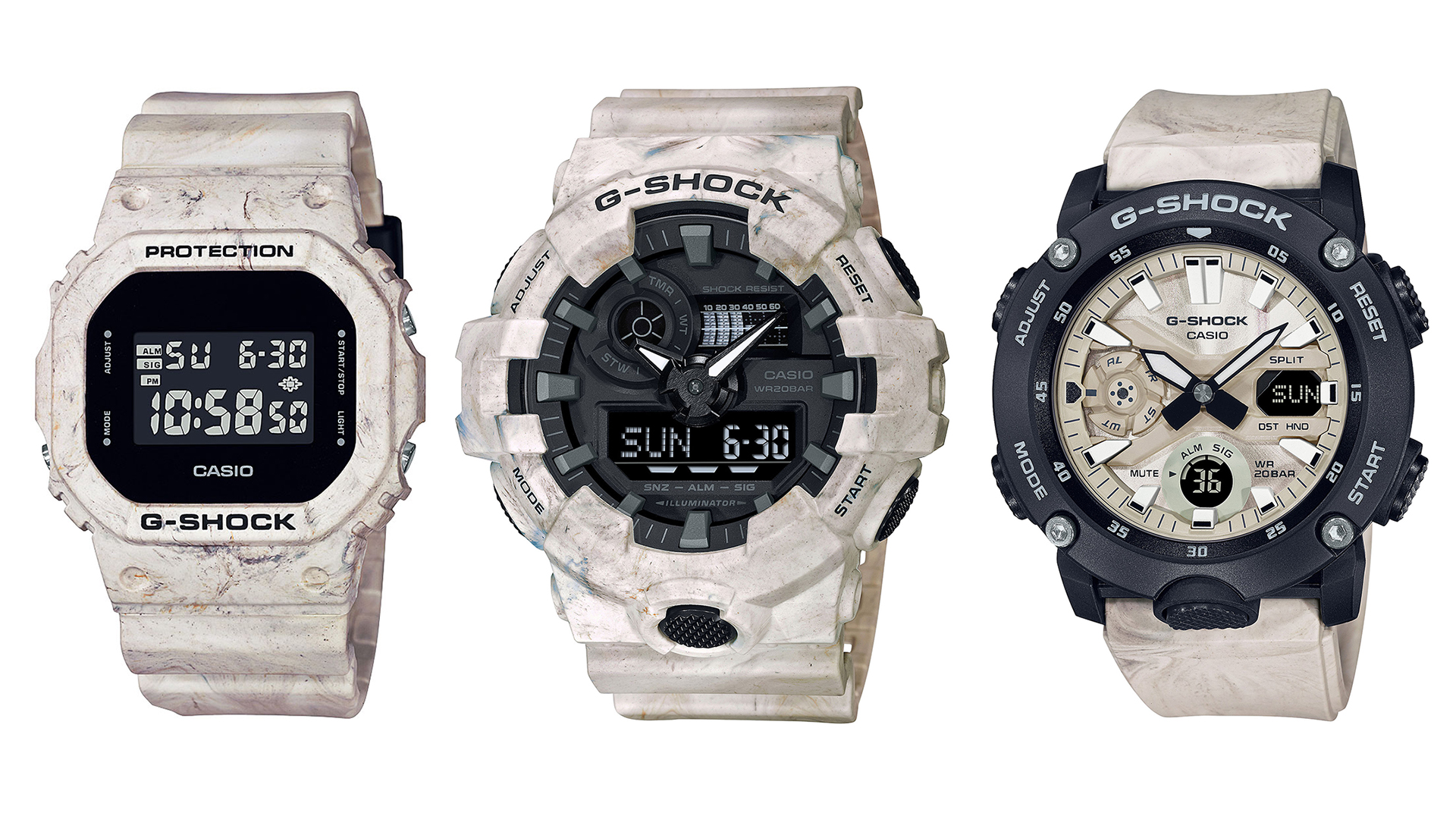 With its bright white color shot through with dramatic darker streaks, white marble has caught the eye of sculptors, architects, and the general populace for millennia. It’s a material almost intrinsically tied with feelings of power, authority, and luxury, so in theory white marble should be no stranger to the world of luxe horology. While the stone does make an occasional appearance as an exotic dial material, the bright and striated look of white marble has made its latest watchmaking appearance in a rather unexpected place. Casio’s iconic and rugged G-Shock line has introduced three new models inspired by the look of marble, showcasing the pattern in a variety of ways. The Casio G-Shock Utility Marble series, including the Casio G-Shock DW5600WM-5, the Casio G-Shock GA700WM-5A, and the Casio G-Shock GA2000WM-1A, offers a polished, monochrome riff on the look of marble in three classic G-Shock shapes. 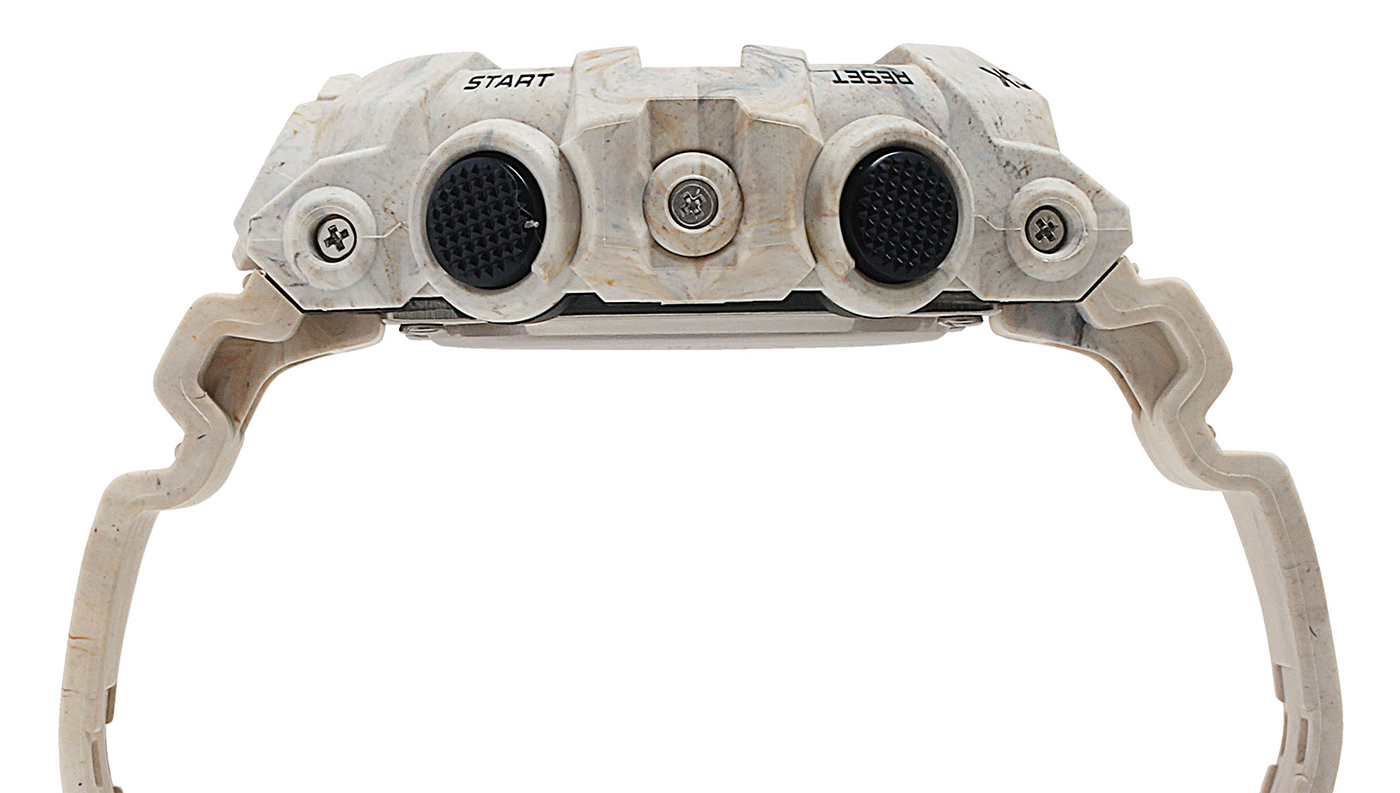 All three models in the Casio G-Shock Utility Marble series use case architecture to interpret the marble pattern in different ways. The G-Shock DW5600WM-5 takes on the original octagonal G-Shock form, with a 42.8 by 48.9mm case in tough resin. To achieve the striated and mottled look of marble in resin form, Casio uses a unique mixed color molding technique with multiple shades of resin poured into the mold at once. Likewise, the heftier 53.4mm by 57.5mm case of the G-Shock GA700WM-5A uses this same mixed color resin molding technology, with a darker, more sandy interpretation to complement its larger frame. For the G-Shock GA2000WM-1A, the brand takes a different tack, showcasing its 48.7mm by 51.2mm carbon core guard case structure in clean black and relegating the marbled pattern to the strap and dial for a striking two tone look. Like all G-Shock models, all three models in the Utility Marble series feature durable shock resistance and a 200 meter water resistance rating. 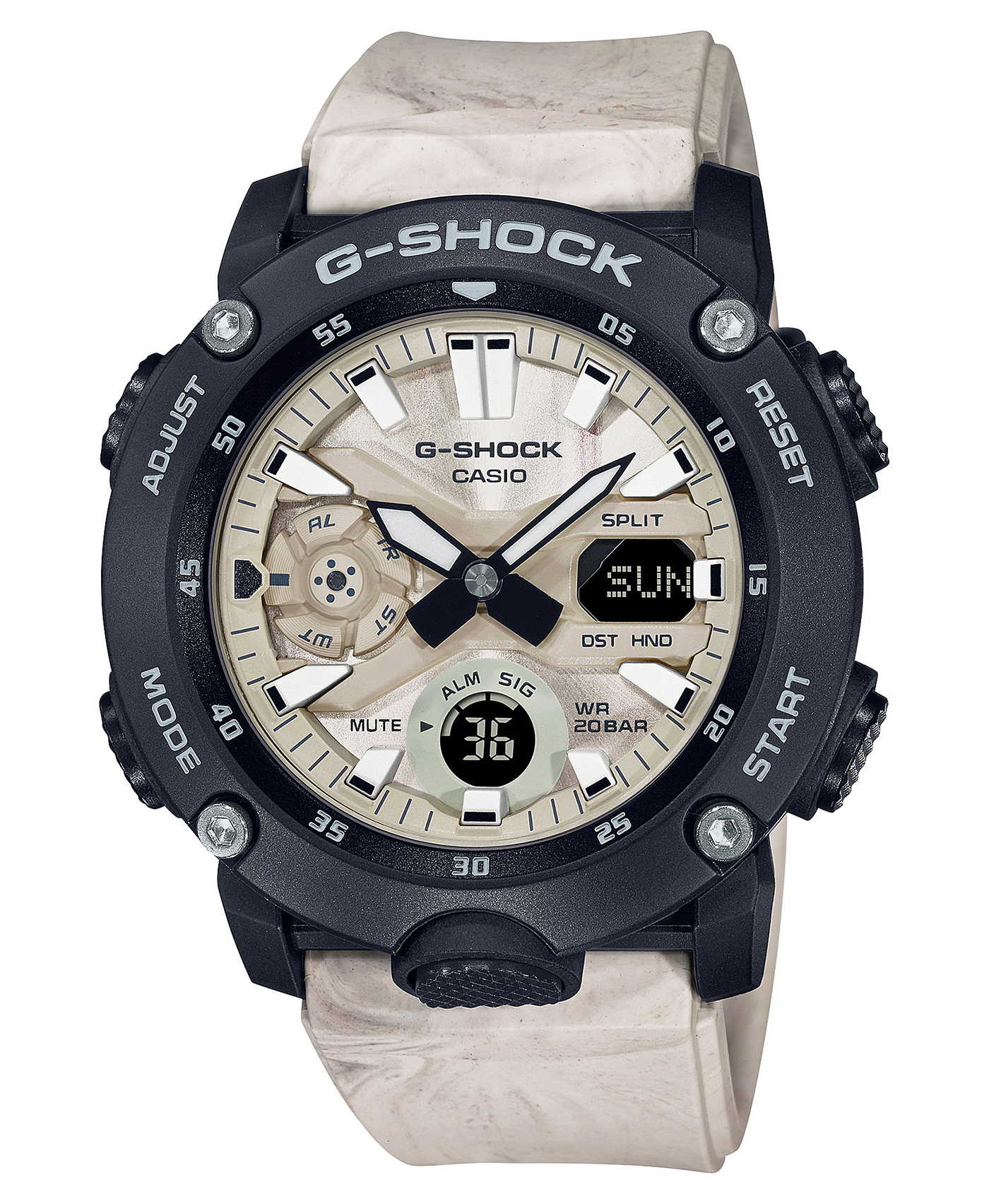 The dials of both the G-Shock DW5600WM-5 and G-Shock GA700WM-5A opt for a clean black treatment with white highlights, keeping the functionality of previous versions intact and maintaining the visual focus on the marbled cases and straps. On the other hand, the analog-digital dial of the G-Shock GA2000WM-1A adds a marble inspired colorway to its bold and complex layout. The central segment of the dial is rendered in a matte off white, while the raised segments flanking it feature a grainy white and gray sunburst that loosely emulates the striped pattern of marble. 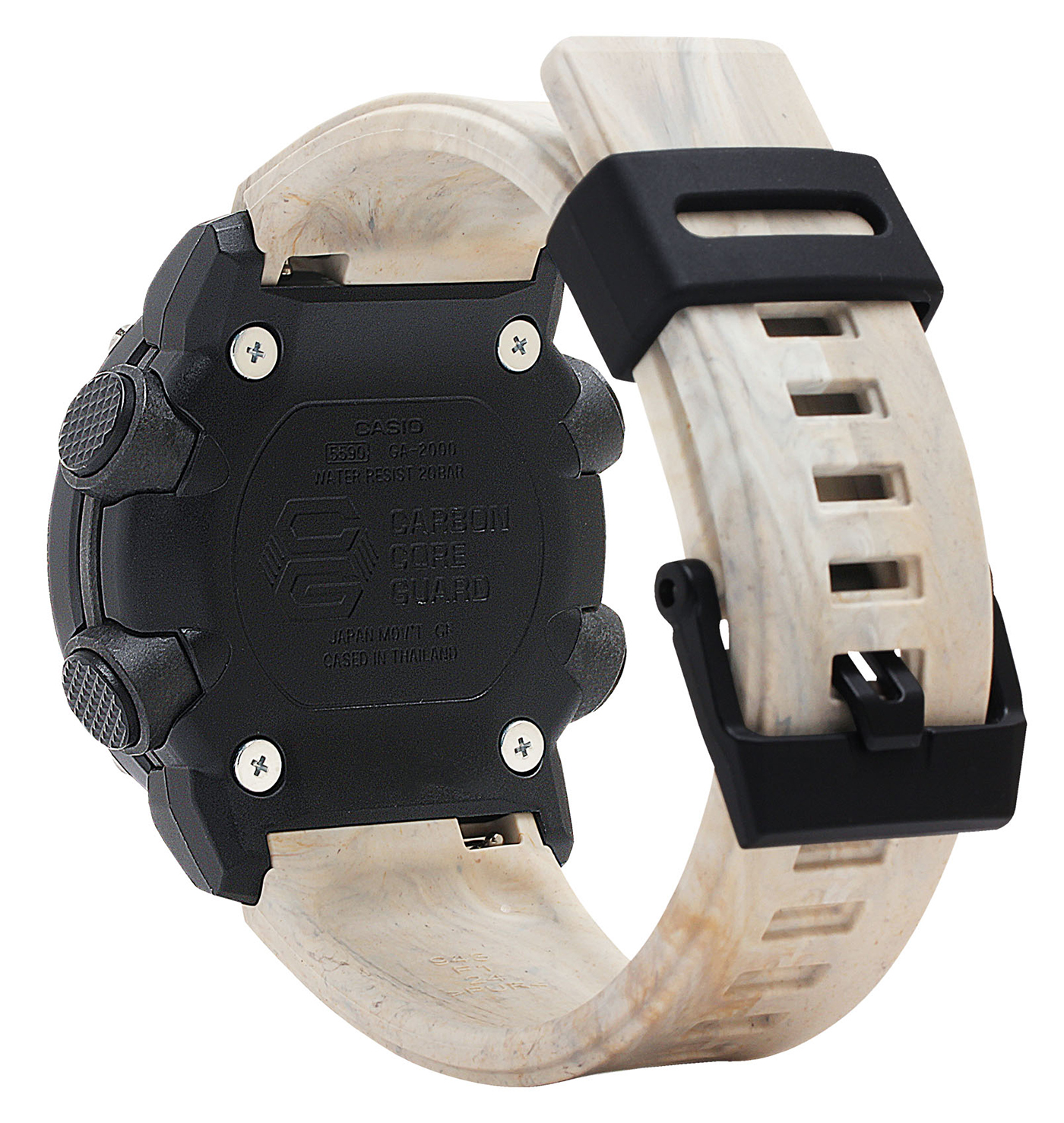 All three variants of the Casio G-Shock Utility Marble series feature the standard in house quartz movements for their respective case styles. For the G-Shock DW5600WM-5, this is the Casio Module 3229 digital quartz movement, with complications including a 1/100 second chronograph, a 24 hour countdown timer, a multi function alarm, a perpetual calendar, and a backlight. The Casio Module 5522 analog-digital quartz movement inside the G-Shock GA700WM-5A offers a slightly wider array of features, including a world timer, four daily alarms, an hourly time signal, a 1/100 second chronograph, a 60 minute countdown timer, and a perpetual calendar. For the G-Shock GA2000WM-1A, the Casio Module 5590 analog-digital quartz movement provides a double LED backlight, a world timer, a 1/100 second chronograph, a 24 hour countdown timer, five daily alarms, an hourly time signal, and a perpetual calendar. Casio finishes each of the three models of the G-Shock Utility Marble series with a marble pattern resin strap to complete the look. 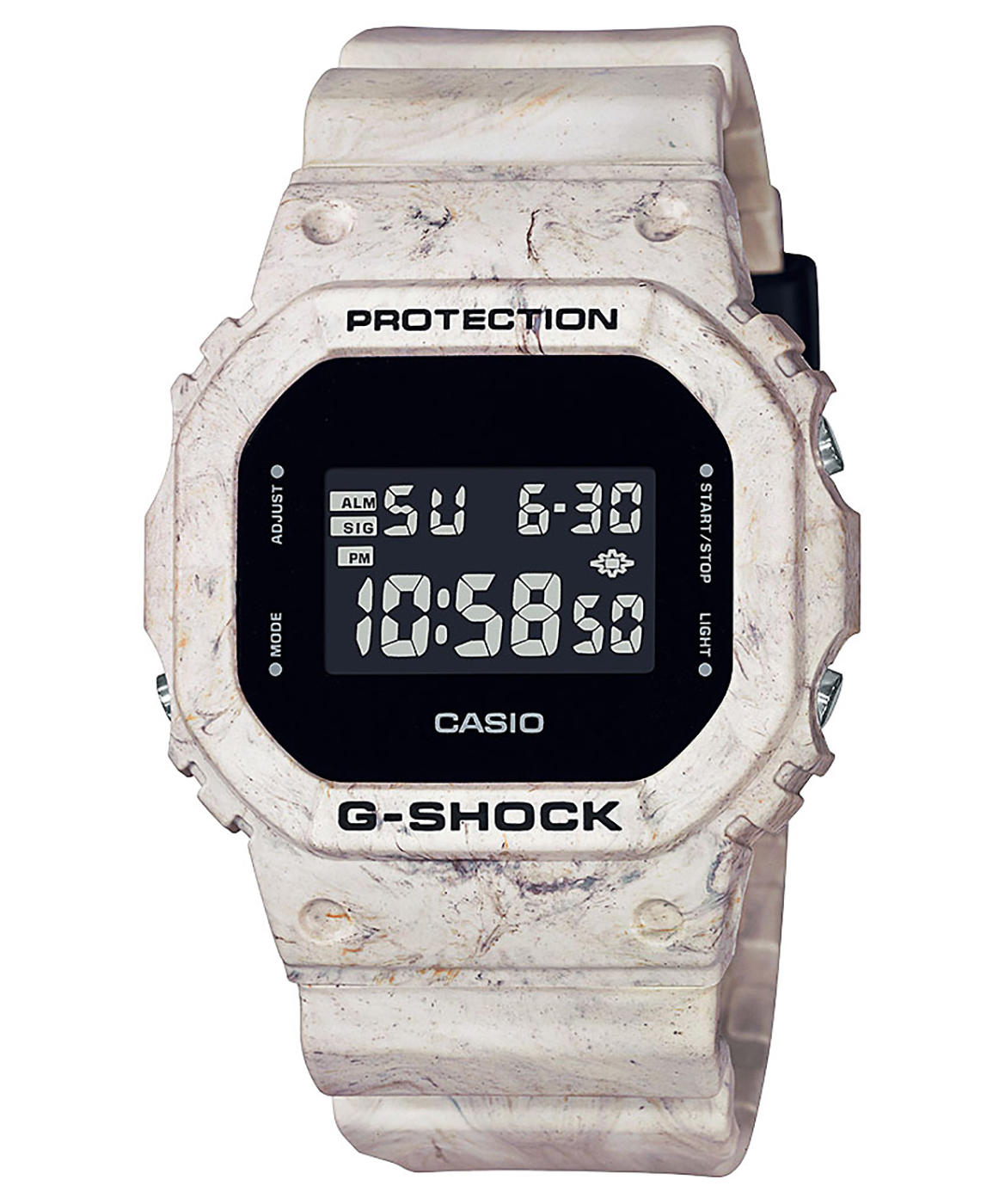