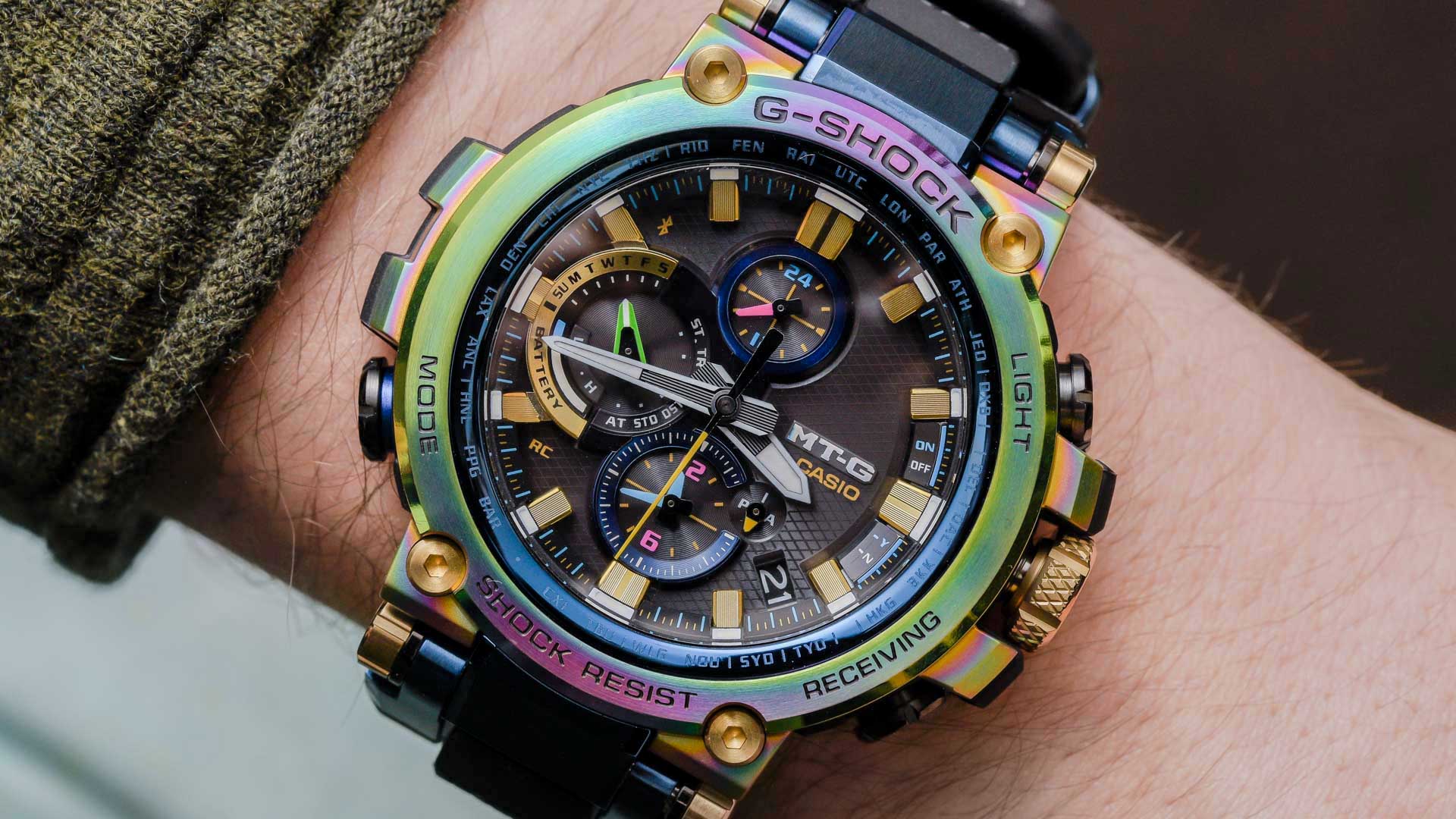 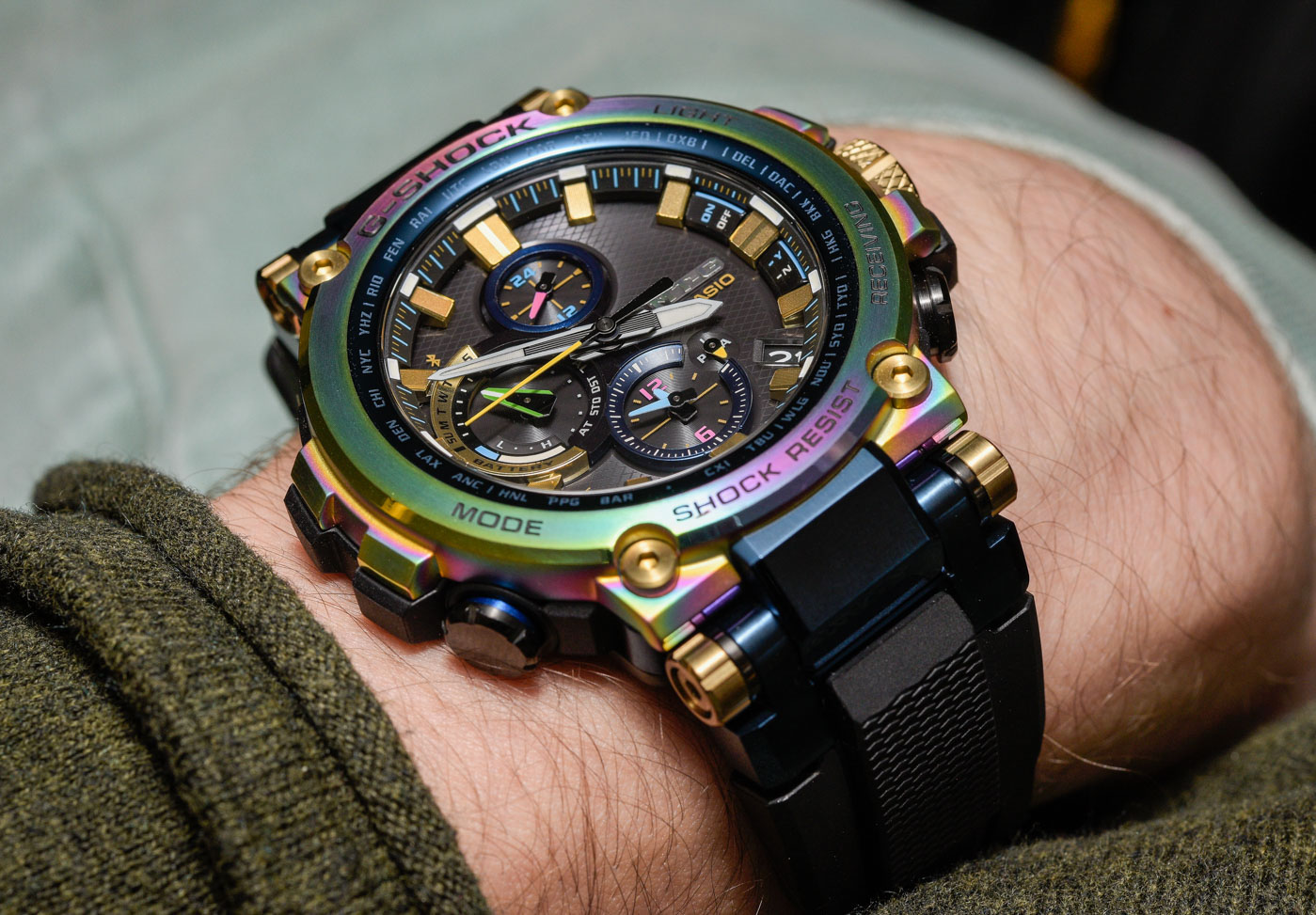 Let me begin with a quick peek behind the scenes of aBlogtoWatch at BaselWorld. Every year, a large part of the aBlogtoWatch team gathers to check out the lamest-to-greatest watch novelties in the moderately charming town of Basel. Over countless meetings, a couple times it happens that a team member finds a novelty, leaps over the desk to check it out in haste, only to then look up with an exaggerated look of lust and new-found love in his eyes. Launched at BaselWorld 2019 to celebrate the 20th anniversary of the Casio G-Shock MTG line, the Casio G-Shock MTG-B1000RB Lunar Rainbow was, by all means, a watch that evoked such cartoonish gestures from more than one of us, as we first got our hands on it at our annual Casio meeting at BaselWorld.

It’s far from perfect, let’s get that clear right away. For one, it is as heavy on the wrist, as it is on the eyes. For two, within the G-Shock market it is quite dearly priced at $1,000 — even though we have had time to get used to very pricey G-Shocks by now. But let’s not get too ahead of ourselves and begin with some context. 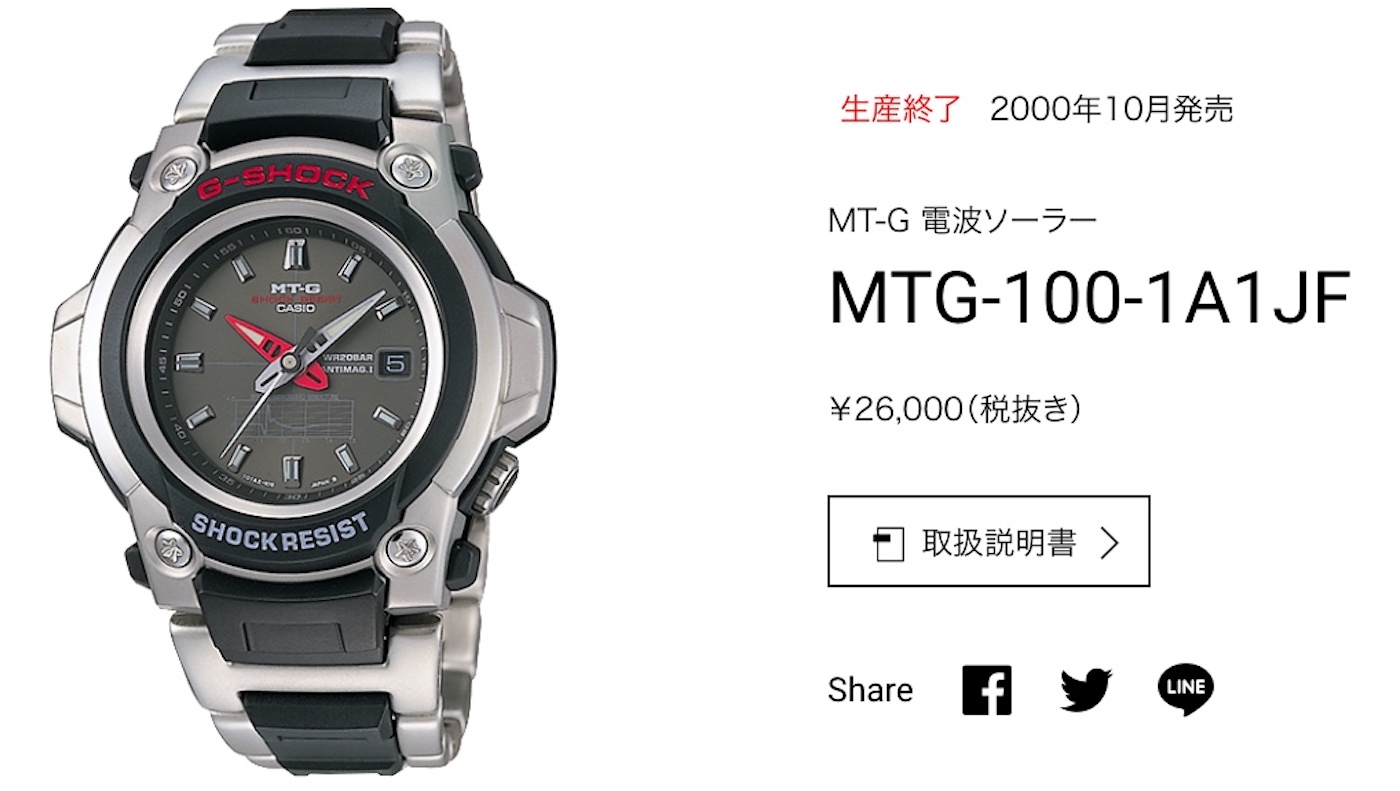 The Casio G-Shock MTG-B1000RB Lunar Rainbow belongs to the more high-end “MTG” line of G-Shock watches, where an elevated price range allows for the brand’s trademark “absolute toughness” to be combined with new-found levels of sophistication. First introduced exactly 20 years ago, the MTG designation today entails the use of metal case components and a so-called Sallaz polishing technique, making for an exterior that looks and feels much more luxurious when compared with your cheap and cheerful G-Shocks clad in rubbery-plastic. If you have only $150 to spend on a G-Shock, here’s my personal favorite. 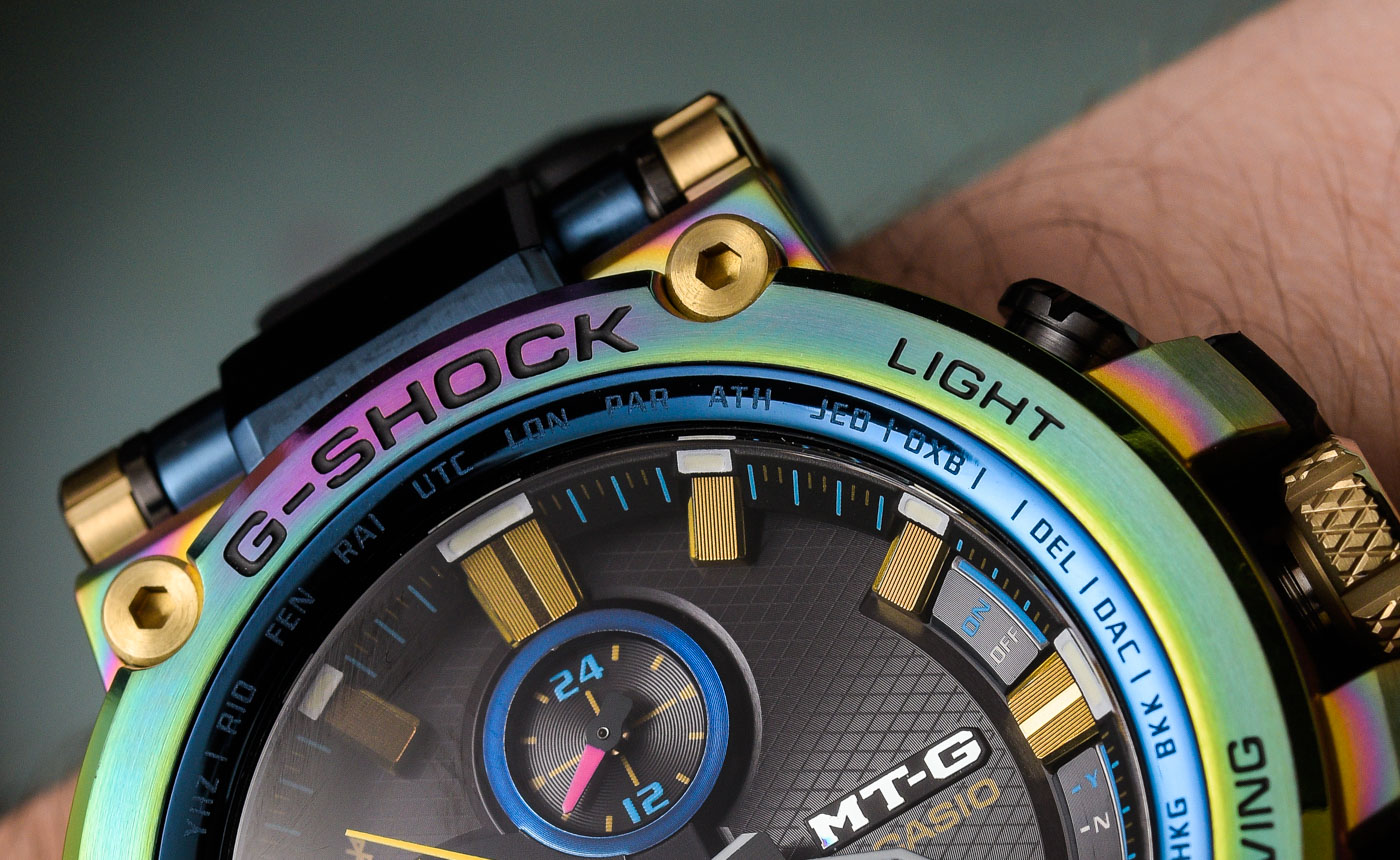 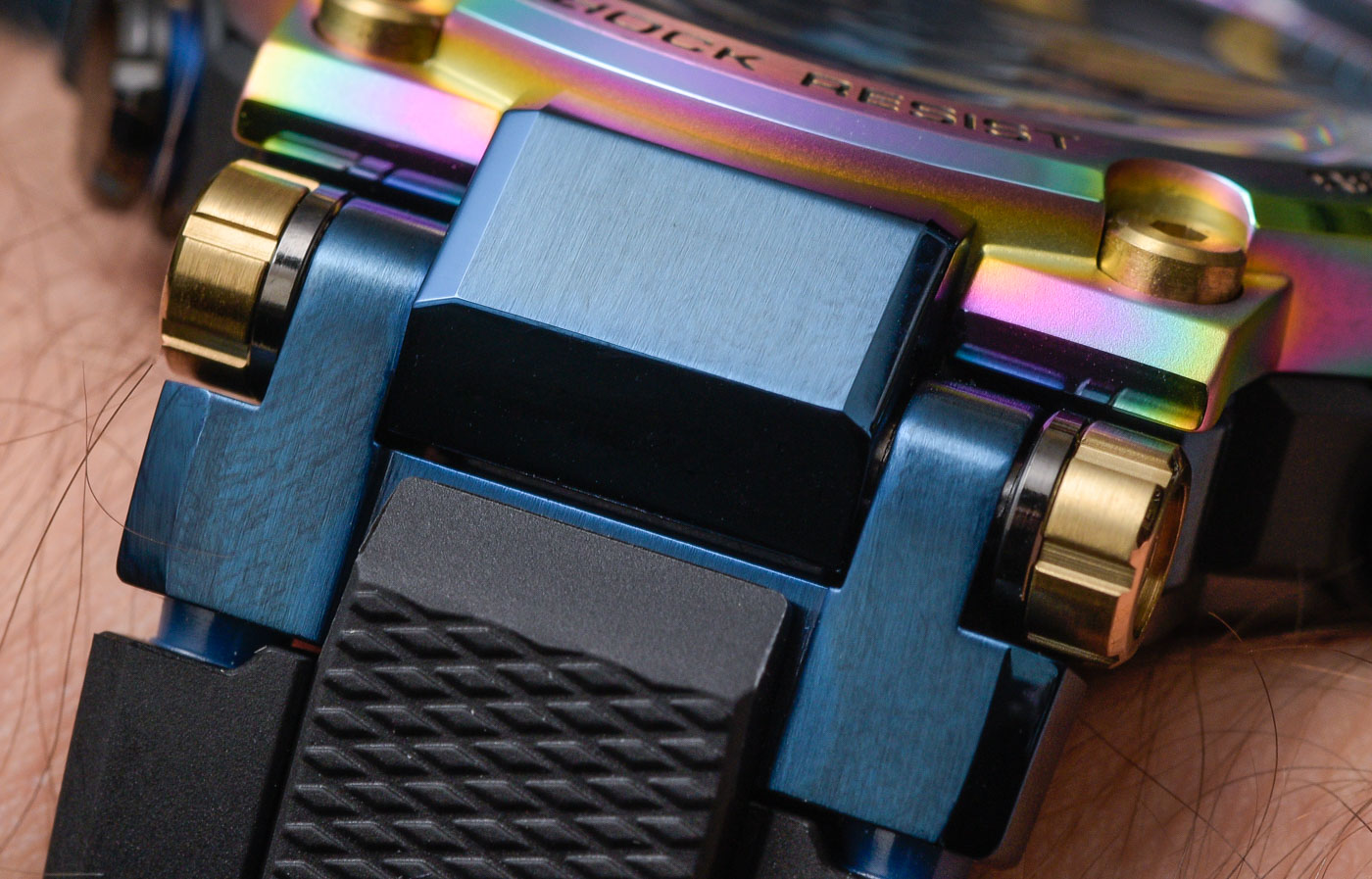 It’s not just looks though; durability and technology also get a boost. A sapphire crystal, a new Core Guard Structure, a carbon-reinforced resin case and yet tougher lugs mean that you can now fall off an even higher waterfall and your watch will still be ticking, even though you will not. The tech includes Multi Band 6 (as it damn well should, for a whole grand), five motors to drive each hand separately, as well as Bluetooth smartphone connectivity with a G-Shock connected app. That sounds dorky as hell, but keeping track of the watch’s chronometrical self-adjustments, self-updates, and even the power generated by the solar charging panel is admittedly kind of interesting. 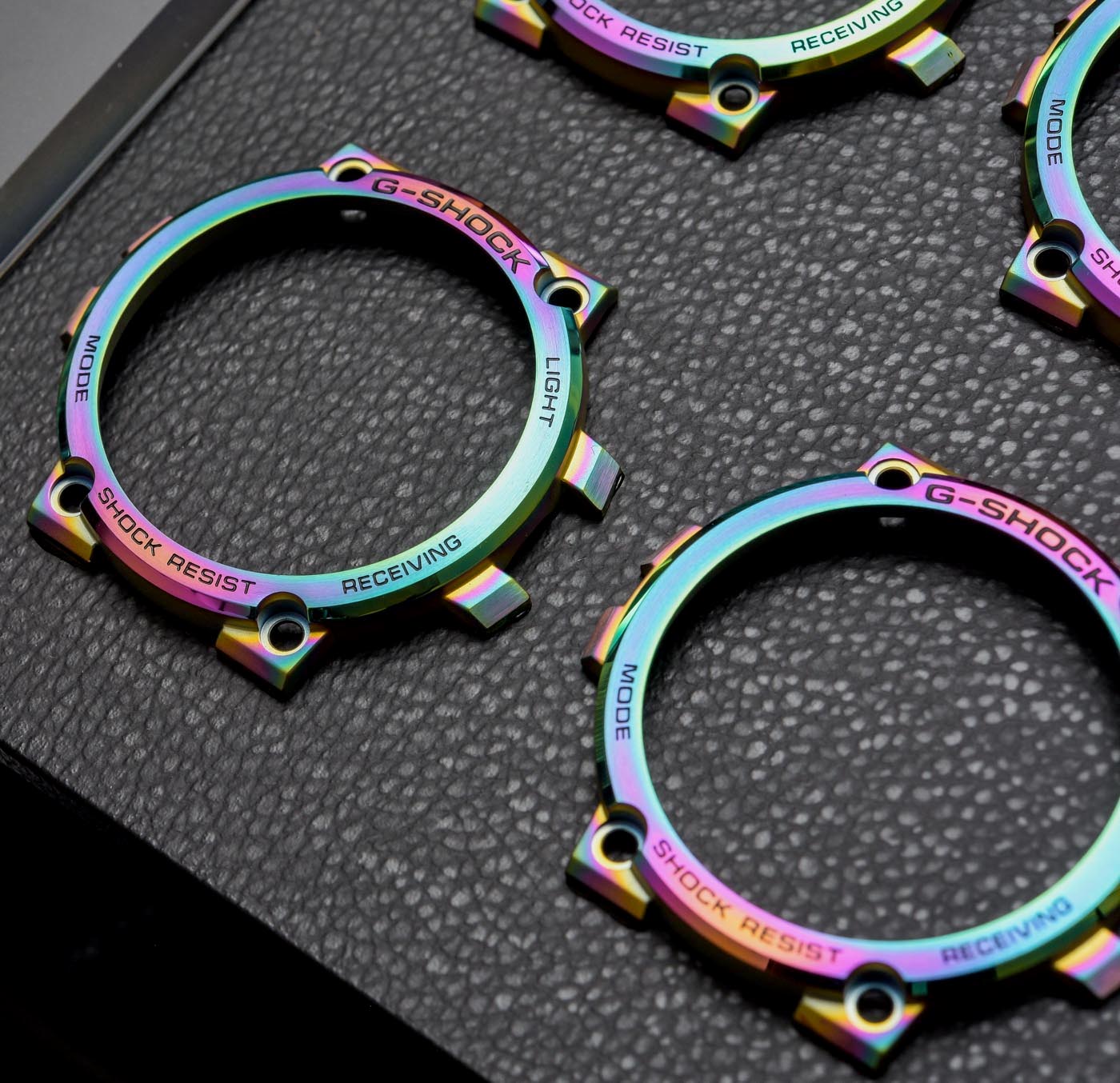 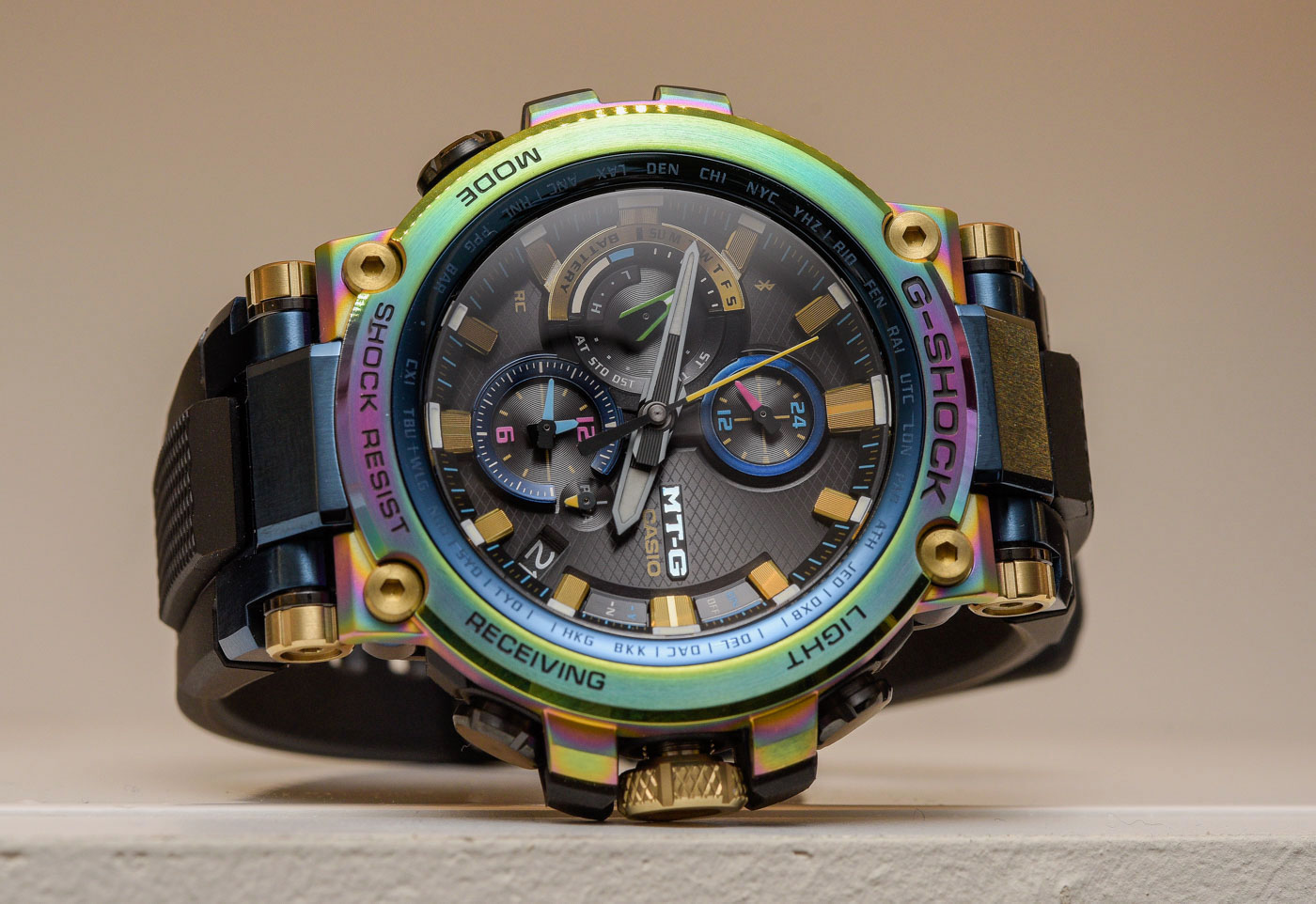 Cutting to the chase here, the whole point of the Casio G-Shock MTG-B1000RB Lunar Rainbow is its namesake feature: the “lunar rainbow” theme. Having never witnessed one, I can only report that the colors are inspired by a type of rainbow that is formed by the light of the moon. Anyhow, it’s a cool name to go with a special color scheme, so why not give it a pass? A unique rainbow ion-plated (IP) finish sets the case, crown, crown guards, bezel, screwheads and lug structure apart from any other watch you can think of — I do wish that there was a bracelet to go with it all, even though I remain uncertain whether my mind could actually process that sight. 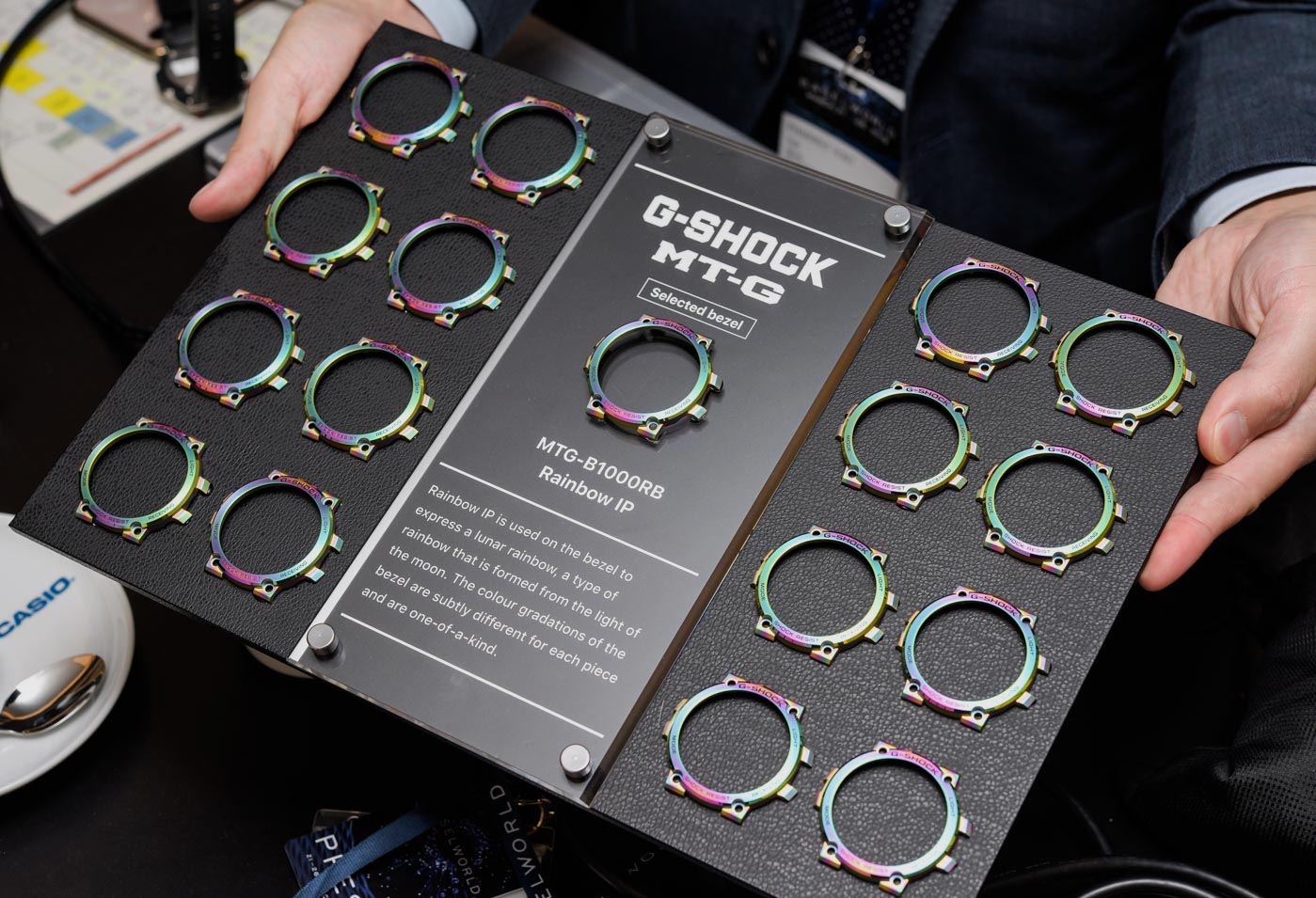 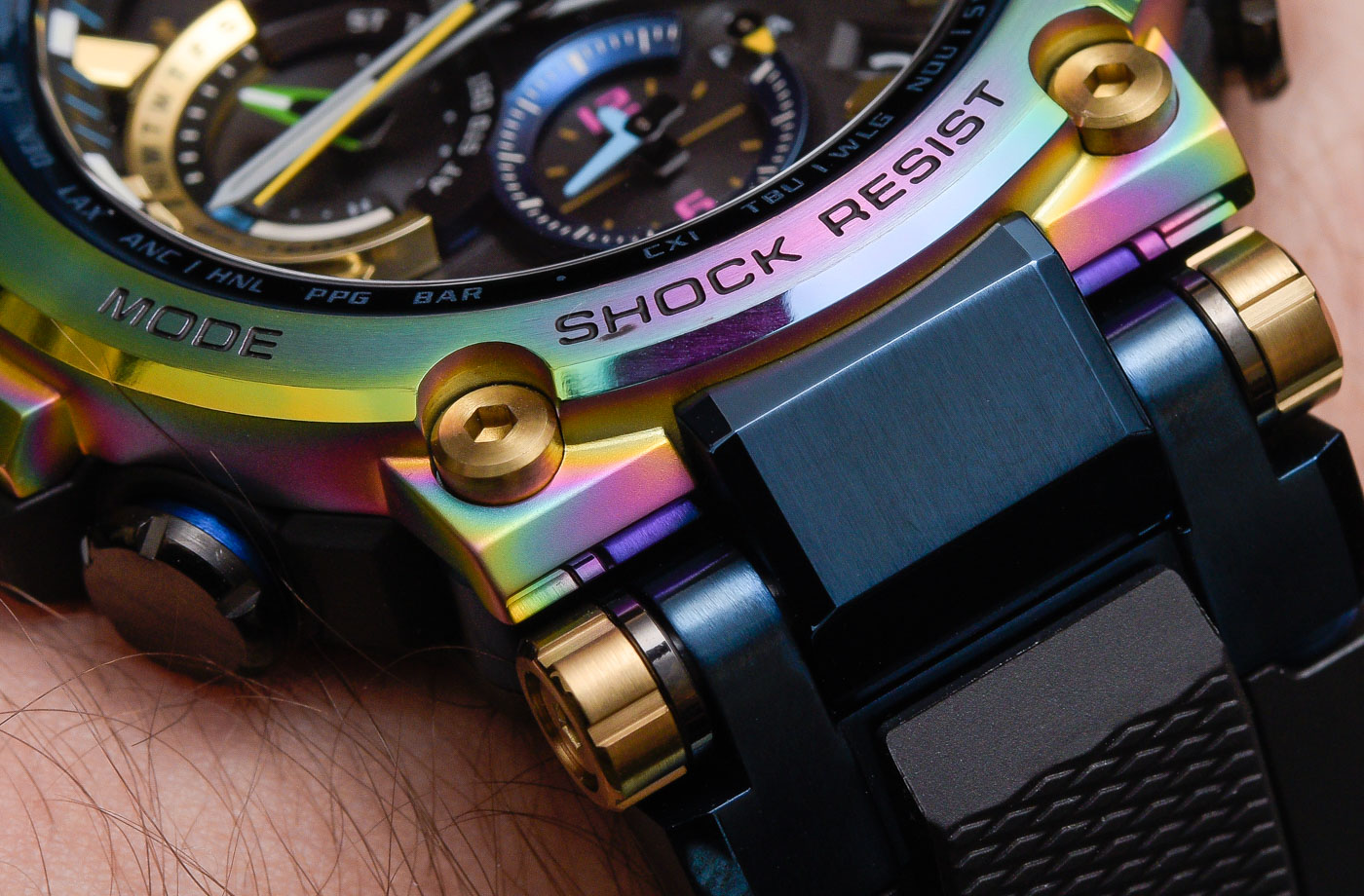 Interestingly, although the pattern might at first appear to be random, all Casio G-Shock MTG-B1000RB Lunar Rainbow watches will have roughly the same pattern: purple around 6 and 12 o’clock, green and yellow elsewhere around the bezel, and blue on the lug structure. That said, Casio has confirmed that each and every watch will be slightly different, so the exact colors and the area that they cover will vary from one watch to another. The case measures 55.8mm-tall, 51.7mm-wide and 14.4mm-thick. A weight of 123 grams is tamed by a resin band matched to a tang buckle. 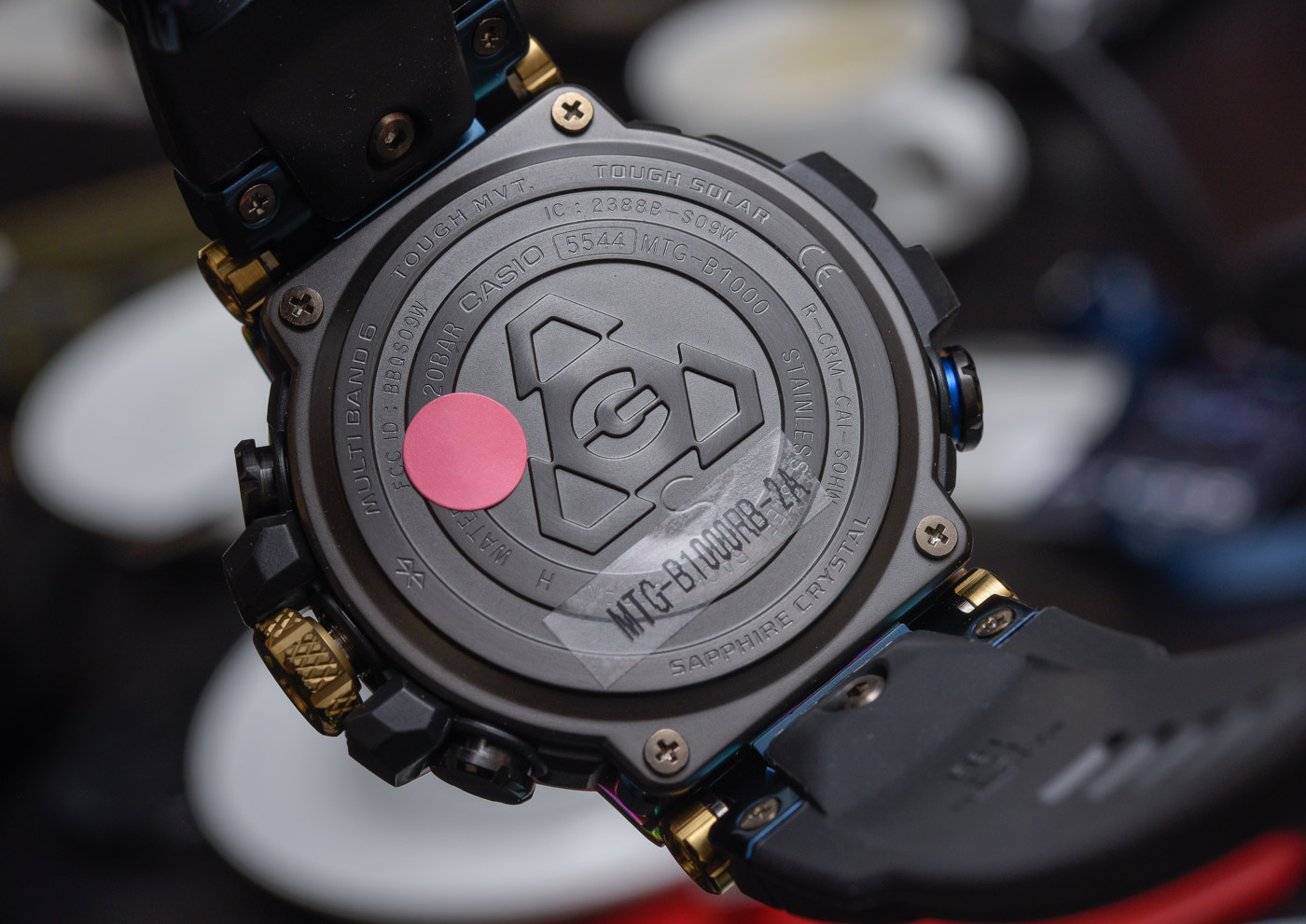 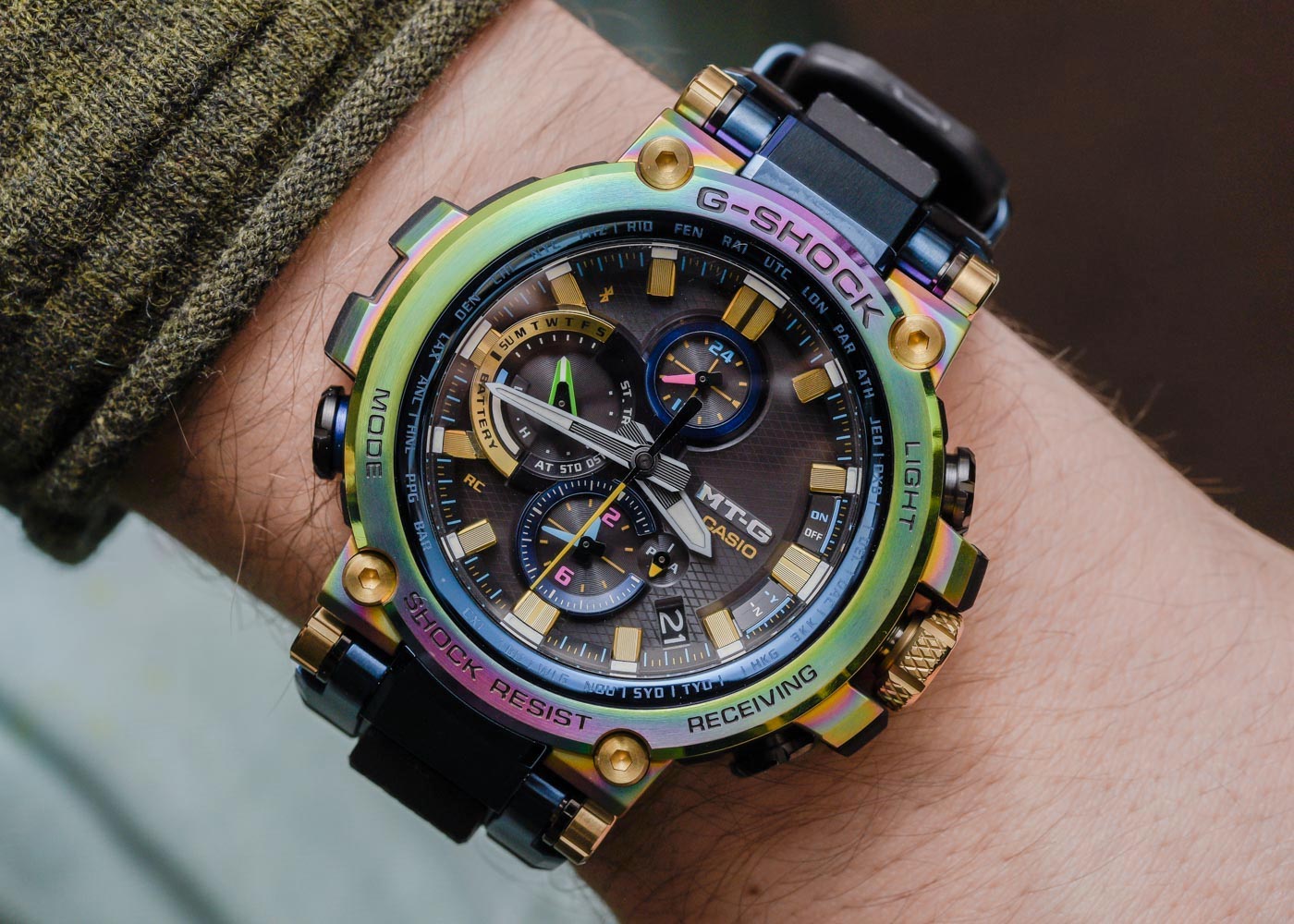 Despite those rather gargantuan proportions, the watch looked okay and felt shockingly good around my 6.75″ (~17cm) wrist. I can’t wait to get one of these in for review to gauge how it fairs out there in the real world, with the BaselWorld-romance all lifted from my eyes.

If you do know that you surely love this colorway but want to learn more about the MTG line of G-Shocks, you can learn all there is to it from Ariel’s review of the MTG-B1000 here. That is essentially the exact same watch but with a safer color scheme. Oh, and that one gets you a full metal bracelet and a 100-dollar savings over this fancy-colored Lunar Rainbow edition. 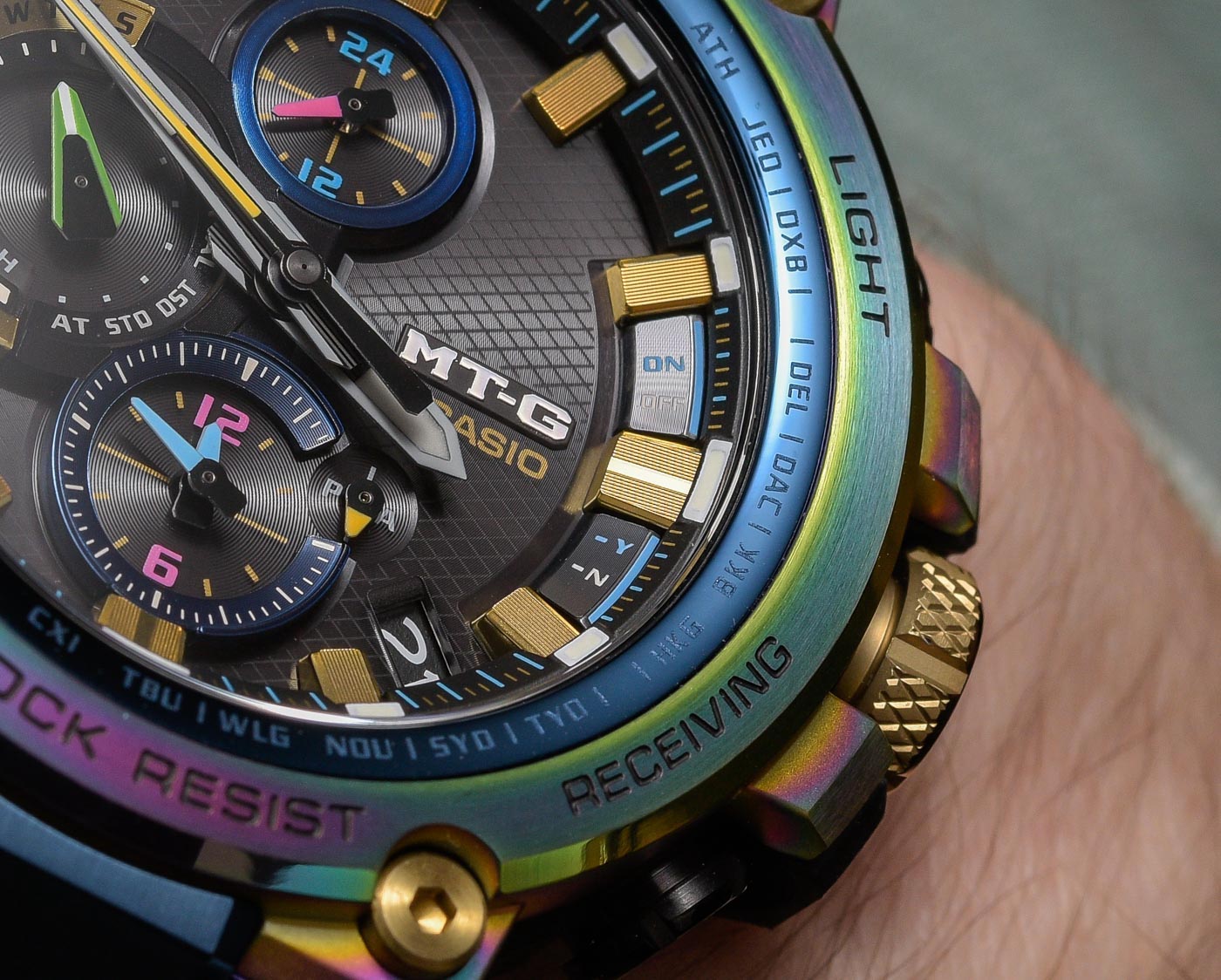 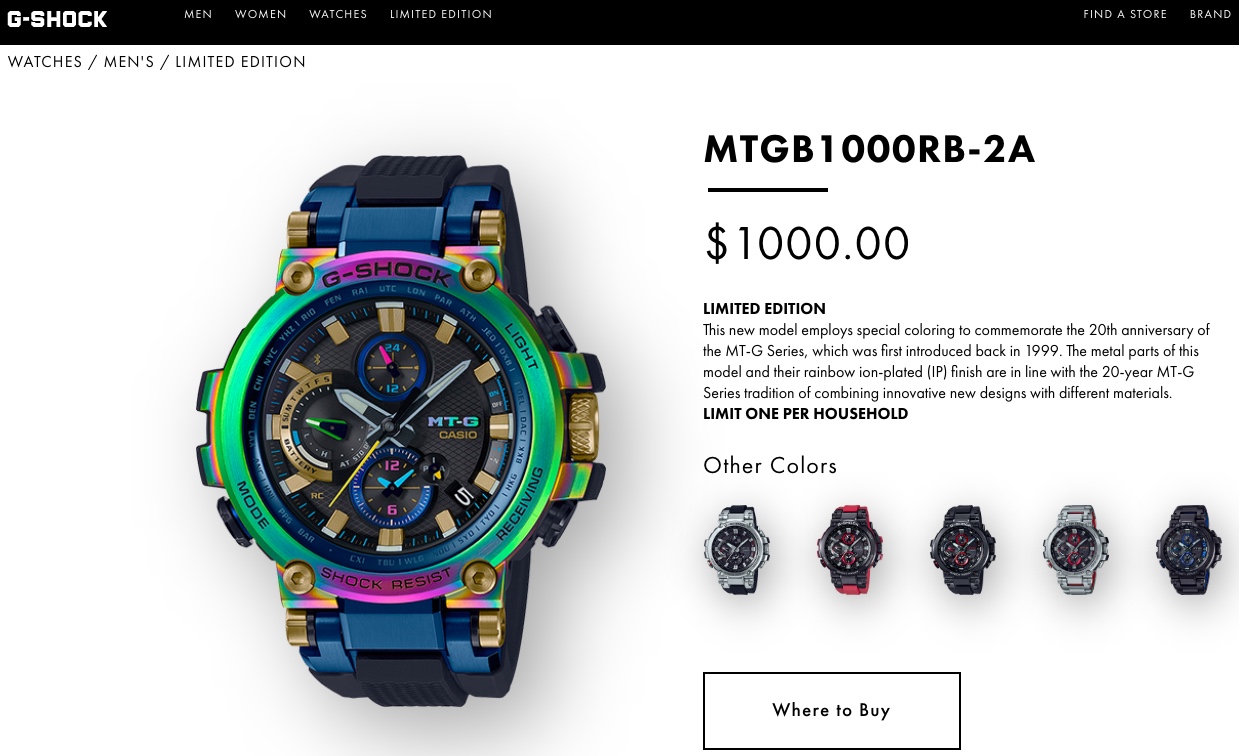 Price for the Casio G-Shock MTG-B1000RB Lunar Rainbow is $1,000 and, quite hilariously, they are limited to “one per household” on the G-Shock website. The good news is that the Lunar Rainbow doesn’t appear to be a numbered limited edition — but if you love it, you better head to your local store or order it online, because once these get out of production, a hefty second-hand premium will likely be attached to them.