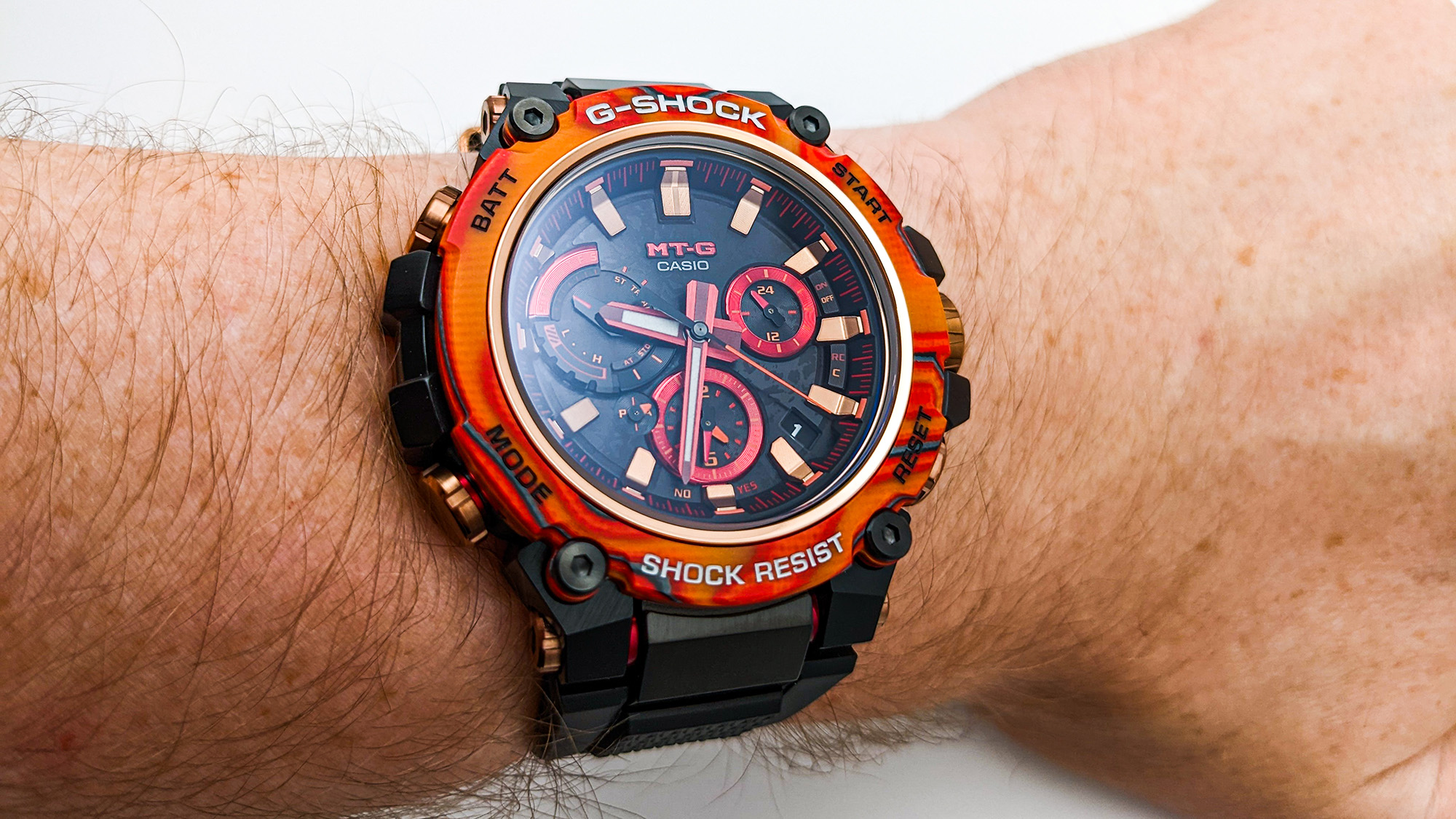 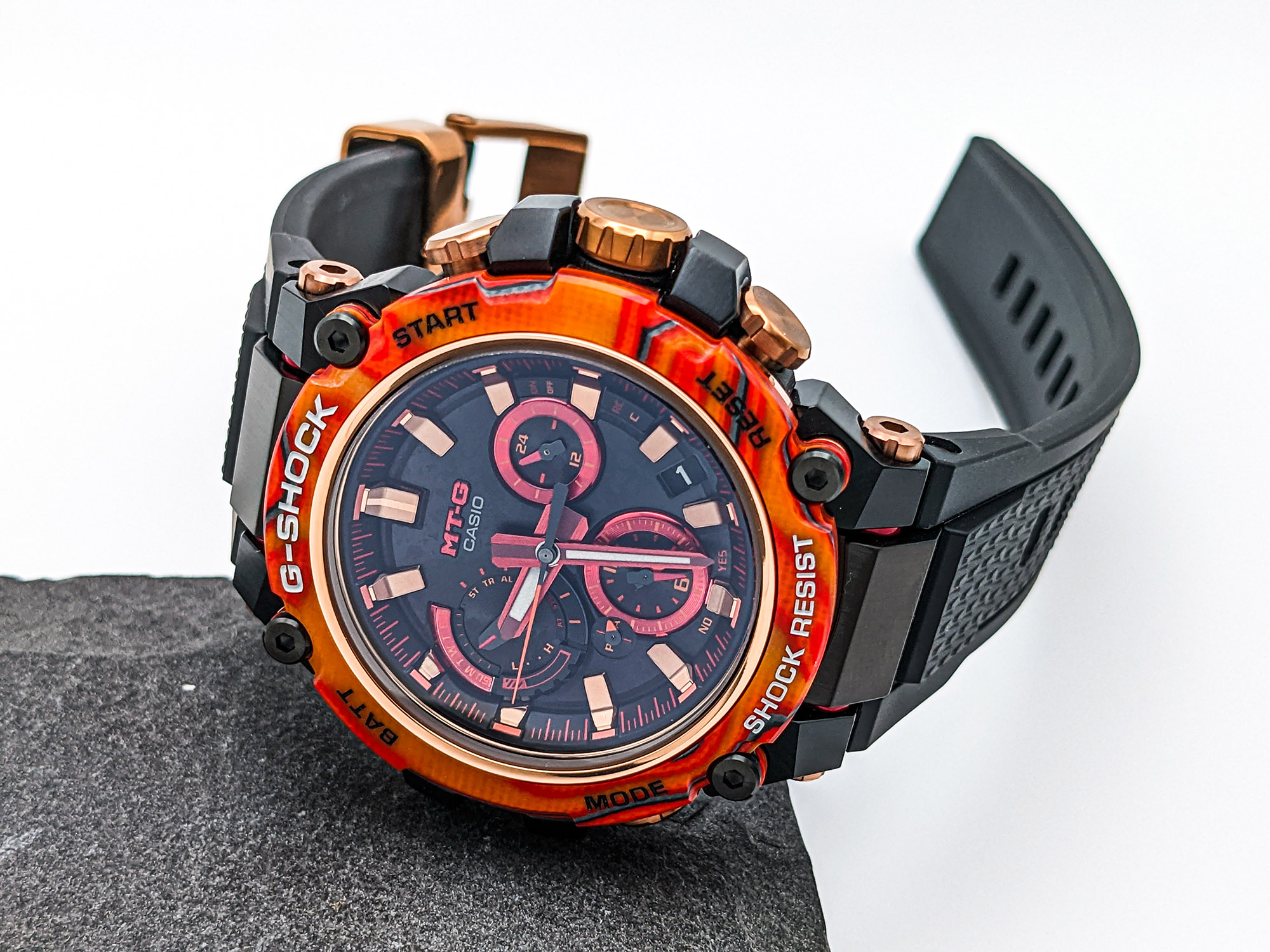 In some ways, it’s difficult to believe the Casio G-Shock has been around for nearly 40 years. So much of the watch industry (more or less intentionally) feels as old as the hills, but Casio’s beloved line of ultra-tough quartz models has always carried a sense of modernity, even futurism, about it. As 2023 and the line’s official 40th anniversary draws close, however, the Japanese brand has taken a head start on the commemorative festivities by playing to its strengths with a bold, vibrant, aggressive design that pushes the limits of what’s possible in (relatively) affordable watchmaking. The new Casio G-Shock 40th Anniversary MTGB3000FR-1A delivers one of the wildest MT-G looks in recent memory, complete with show-stopping innovative materials work, but tempers it with an impressively wearable execution. 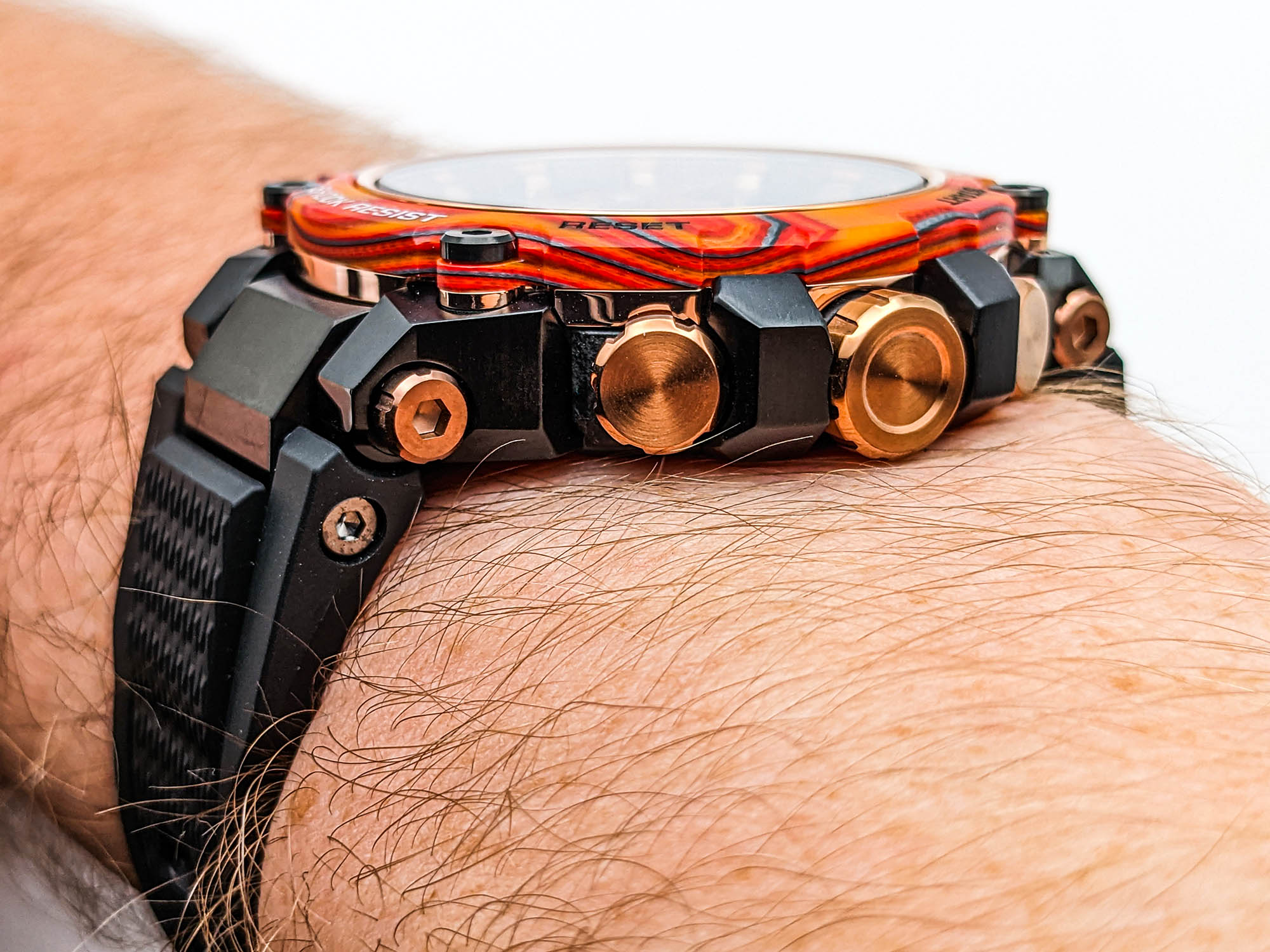 At 50.9mm-wide and 51.9mm from lug tip to lug tip, the Casio G-Shock 40th Anniversary MTGB3000FR-1A’s stainless steel and carbon multi-piece case is far from a shrinking violet on the wrist, but in comparison to previous MT-G iterations, this case offers a surprisingly balanced and manageable wearing experience. The largest factor in this is the 13.2mm overall case thickness, which comes in substantially thinner than many mechanical chronographs, but the case construction also has a major role to play. The heavily faceted brushed stainless steel outer case, with its short, sharply downturned semi-integrated lugs and beefy industrial crown guards, benefits from the slimming power of black ion plating here. Beyond visually compacting the watch on the wrist, it also dynamically breaks up the case’s side profile, immediately drawing the eye towards the pink gold ion-plated crown, pushers, and bezel accents. This colorway on its own would be bold and masculine, but the obvious visual centerpiece is the carbon composite bezel. Inspired by the blazing power and incredible heat of solar flares, this fiery multi-tone bezel blends vibrant shades of yellow, orange, red, black, and gray in an organic swirling pattern that creates a unique look for every example of the MTGB3000FR-1A. In regular lighting conditions, this is an eye-catching fireball on the wrist, but the real spectacle comes when the lights go out – the yellowish segments of the bezel are impregnated with luminous material, leading to an otherworldly, radioactive glowing pattern in the dark. Casio completes this package with its rugged Carbon Core Guard structure and a commemorative engraved caseback while rating the watch for a robust 200 meters of water resistance. 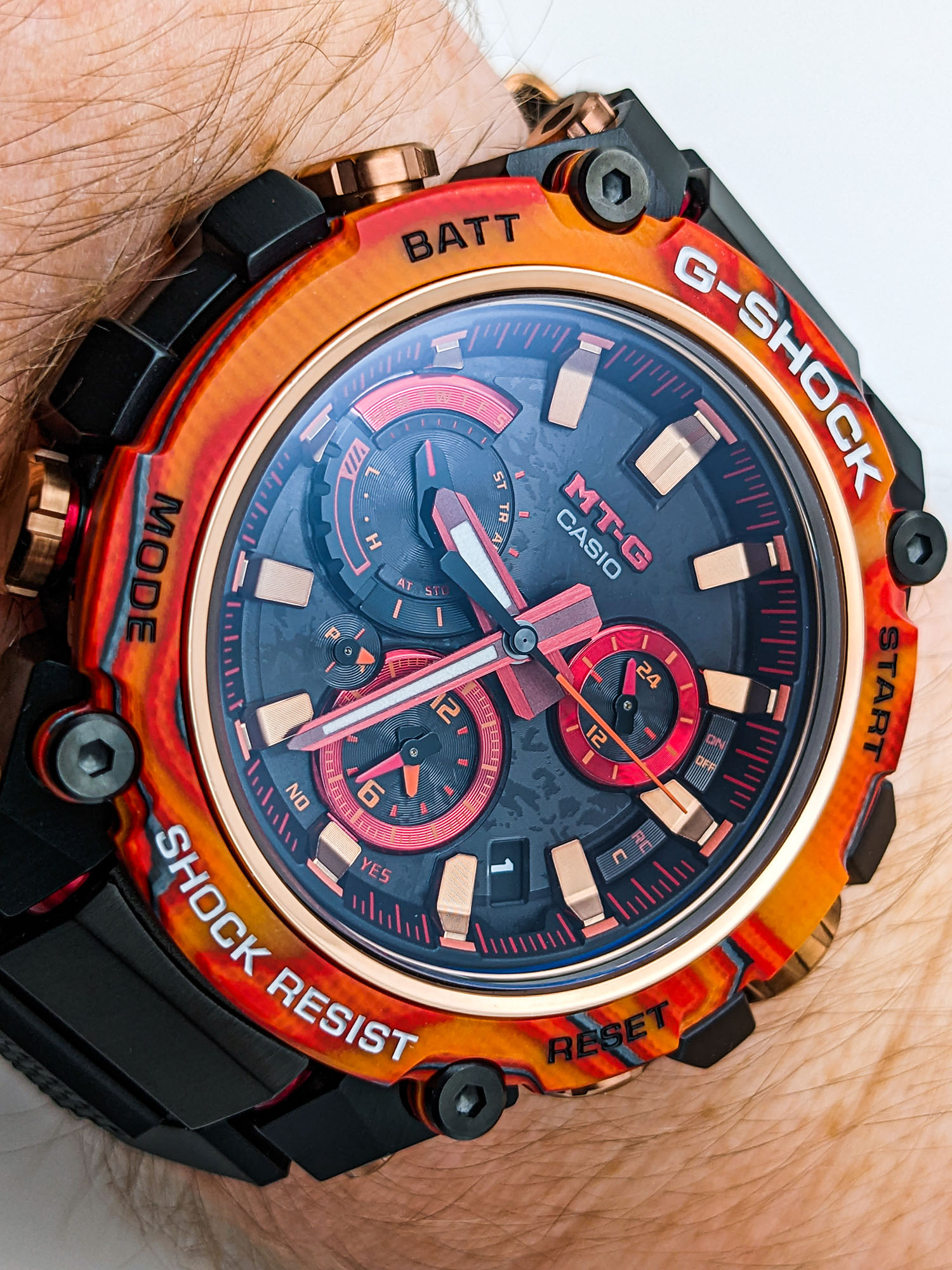 The Casio G-Shock 40th Anniversary MTGB3000FR-1A continues its wild aesthetic approach through its dial, where the brand adds eye-popping color to the already packed MTGB3000 layout. It’s the deep, heavily saturated ion-plated red of the subdials and tapering sword hands that jump out at first glance, but the layers of texture across the dial make this even more dynamic. The black dial surface itself combines a subtle radially brushed texture with a mottled, organic series of irregular darker accents meant to simulate the ever-changing hot patches and darker spots across the surface of the sun. Each dial element adds its own texture to this mix as well, highlighting each piece of the complex layout against the backdrop. Each of the three subdials adds an azurage texture to this mix, with further azurage accents on the highlight rings surrounding the 3 o’clock 24-hour subdial, 6 o’clock second time zone subdial, and segments of the 9 o’clock multi-function subdial. The minute grooved pattern of the pink gold ion-plated indices gives these elements a bolder, more substantial feel than traditional brushing, while the split brushed and matte surfaces of the hands break up the visual real estate across those large surfaces. As is often the case with Casio’s higher-end G-Shock offerings, the MTGB3000FR-1A’s dial finishing trounces any comparable offerings at its price point, providing more detail and intricate surfacing than traditional mechanical designs costing many times more. Of course, this vibrance and complexity won’t be to everyone’s taste and carries its own drawbacks. The 4:30 date window will likely continue to be a divisive addition to this design, while the wide range of functionality offered by the 9 o’clock subdial can come off as arcane to those unfamiliar with analog G-Shocks. 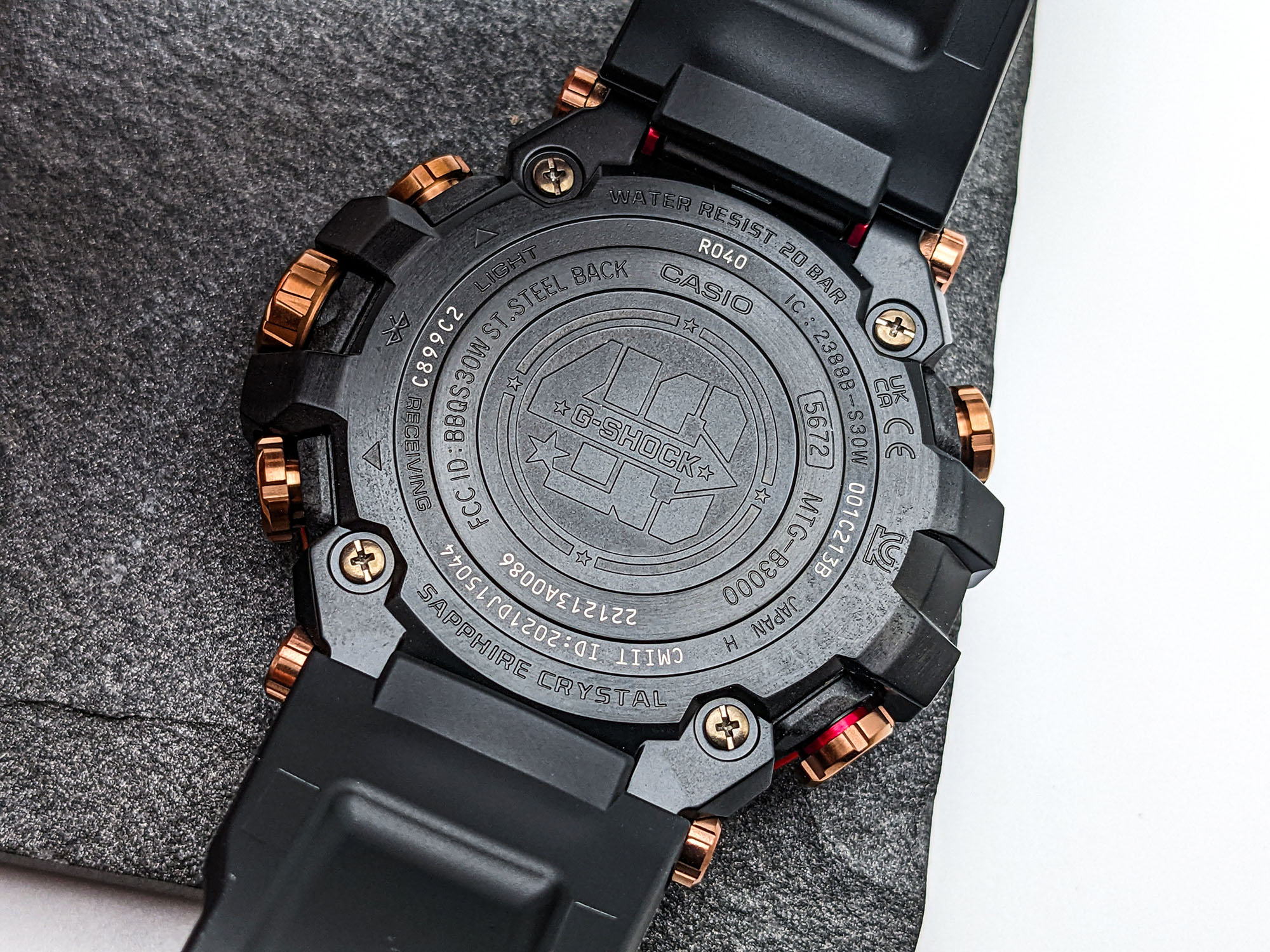 Casio powers the G-Shock 40th Anniversary MTGB3000FR-1A with its in-house Module 5672 quartz movement. Like all modern upmarket G-Shocks, the Module 5672 offers a dizzying array of functionalities. The full range of complications includes a world timer displaying two time zones that automatically adjusts for daylight savings time, a 24-hour countdown timer, a 24 hour chronograph, a programmable daily alarm, LED dial illumination, a perpetual calendar, and automatic radio-controlled time correction six times per day. In practice, this makes the Module 5672 more or less perfectly accurate, but even without the time correction function the movement provides a solid +15/-15 seconds per month in accuracy. Casio also uses its Tough Solar light-powered recharging system here, which allows the Module 5672 to offer an 18-month power reserve after a full solar charge. The Module 5672 also offers Bluetooth connectivity and smartphone pairing for easy time and date setting through the Casio Watches app. However, the pairing and adjustment process through this app is decidedly less intuitive than the G-Shock Connected app used for previous MT-G generations. 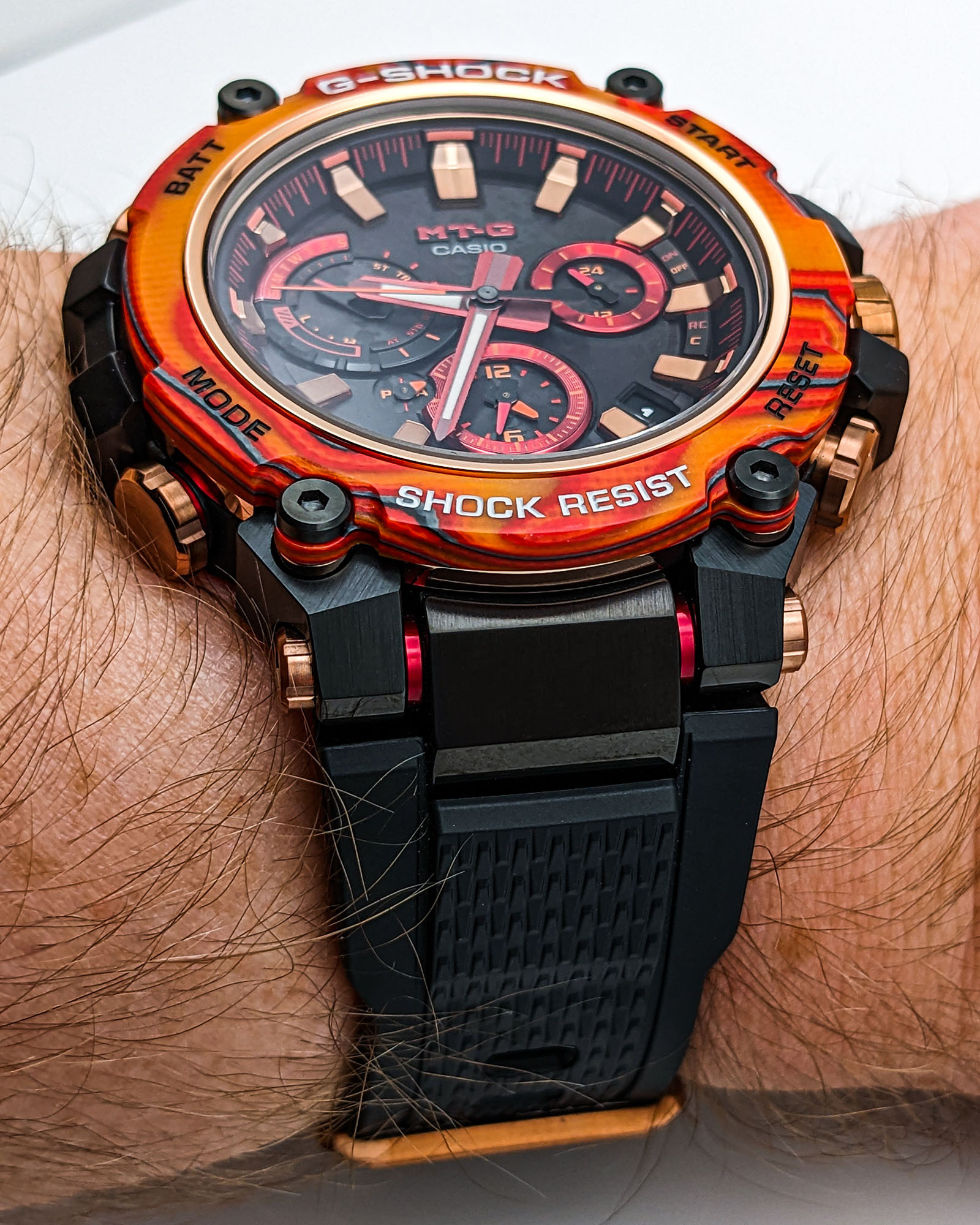 To complete the design, Casio fits the G-Shock 40th Anniversary MTGB3000FR-1A with a semi-integrated strap in supple black resin. Like previous MT-G straps, this is a heavily textured piece, with a raised central section near the lugs, an abrupt taper midway down the wrist, and a muscular overall feel. The raised pattern across the central section adds some dynamic visual complexity to the black-on-black juncture of the case and strap, while the pink gold ion-plated pin buckle and keeper form natural highlights. Casio adds one last salute to its anniversary on the keeper, with special etched “Since 1983” text. 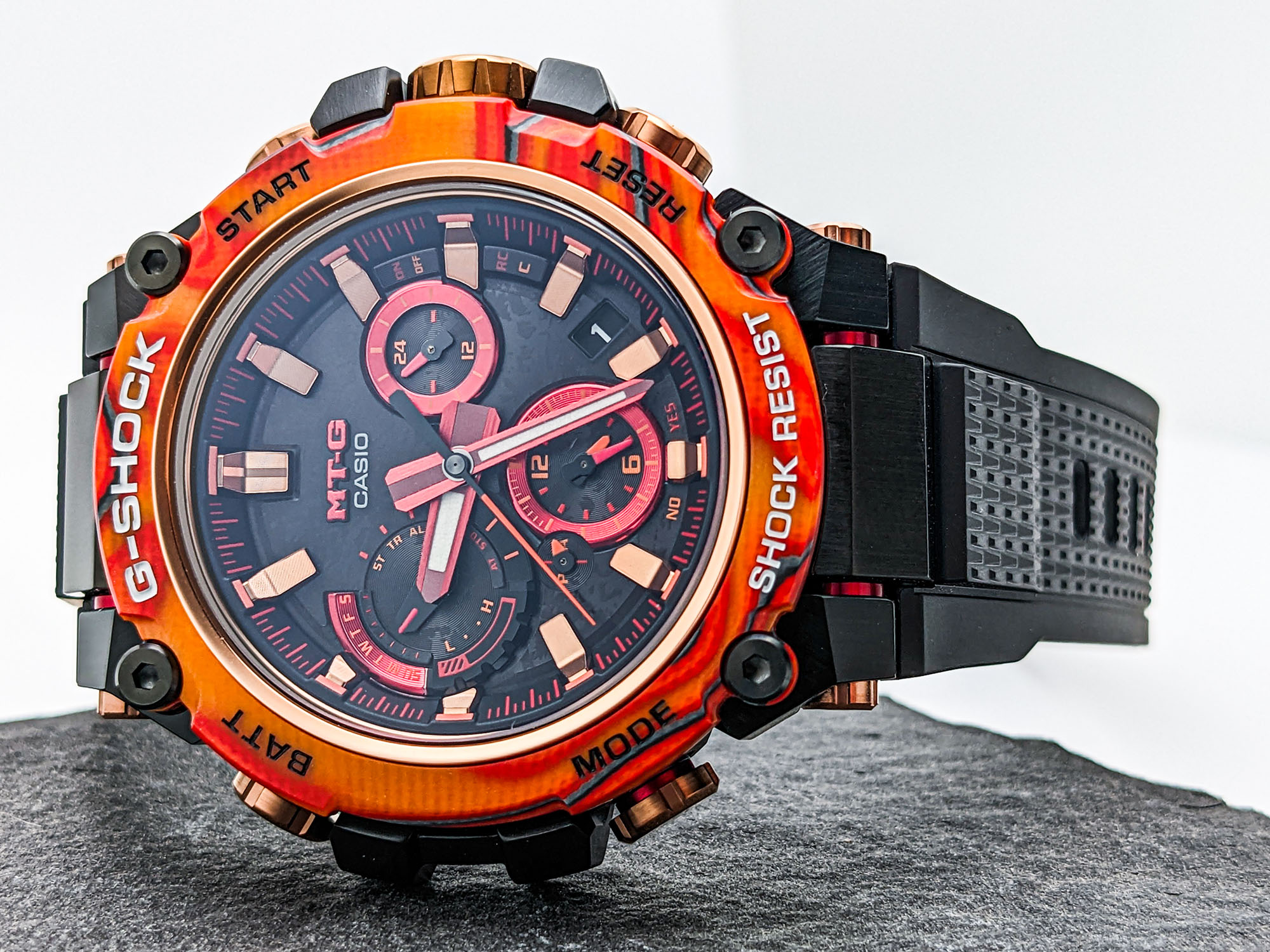