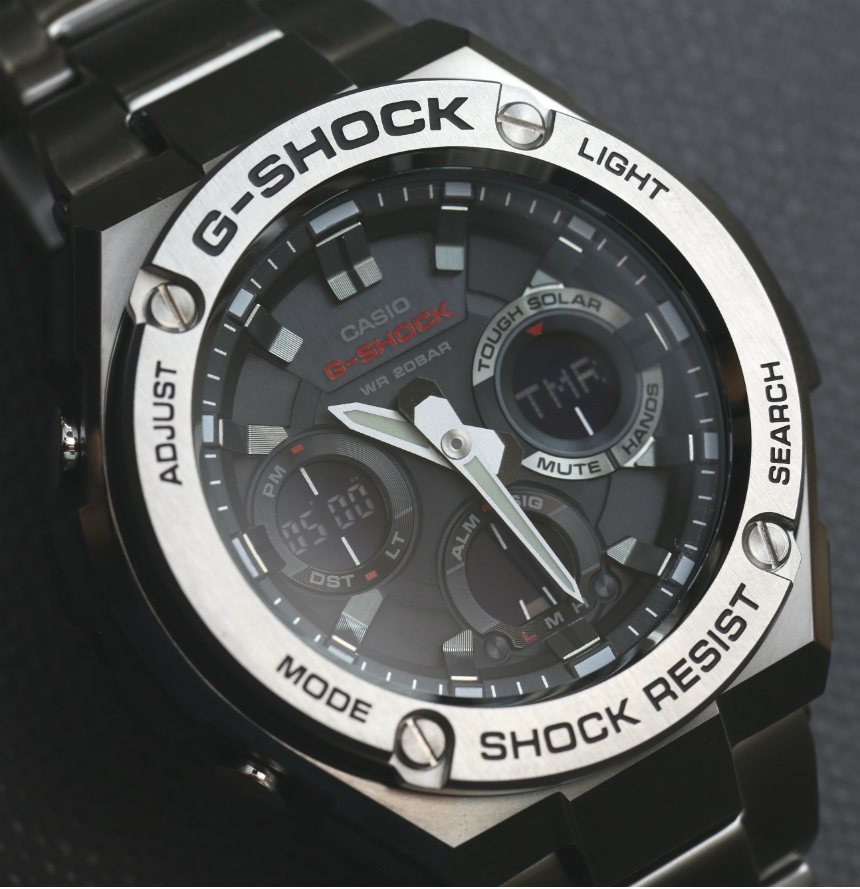 A Casio G-Shock that offers analog time display, packs most functions you could possibly need, comes in steel on a bracelet and has a truly affordable price to boot? It’s here, it’s called the Casio G-Shock G-Steel GSTS110D-1A, and I was excited to see how this arguably more grown-up G-Shock faired on a day-to-day basis! The G-Shock has always been a bit of a conundrum to me. On one hand, you’ve got a watch that defines durability and reliability. In fact, it’s the go-to watch for many members of the armed forces. On the other hand, you’ve got the stigma of a watch that often displayed the refinement of a Tonka truck – to a great extent, due to the fact that so many G-Shocks are plastic (which is actually better at being shock resistant than steel). However, the G-Shock MT-G (hands-on here) and MR-G (reviewed here) are relatively “adult-looking” watches which, while you’re not going to wear them with a suit, won’t make you come off quite so sartorially challenged.

For those unfamiliar with the older siblings, Casio released the MT-G and MR-G watches earlier this year. Marketed as the high-end G-Shocks, these steel models were only available in Japan for some time but are now being sold around the world (much like Seiko with their high-end Grand Seiko watches). Casio has had a long evolution in creating watches with analog dials, in addition to steel watches. The reason for this, simply put, is that a digital watch in plastic is more durable. Aware of the fact that buyers spending thousands of dollars on a watch want some of the aforementioned “premium” aspects, Casio has launched watches like the MT-G, the MR-G, and their younger, more affordable sibling- the G-Steel.

Of course, those are some of the most high-tech watches you can strap on your wrist and as such, are not totally designed with aesthetics in mind; plus they came with not very G-Shock-like price tags. For the MT-G, you’re talking about just under $1,000 while the MR-G will set you back a cool $3,000. To address the demand for a more affordable price point, enter the Casio G-Shock G-Steel GSTS110D-1A watch. Stripping the costlier MT-G and MG-R watches of functions like the titanium finish and the “GPS Hybrid Wave Ceptor” technology (GPS time setting, basically), this Casio G-Shock G-Steel GSTS110D-1A still offers rugged features like shock resistance, 200M water resistance, solar power, LED light on both the face and an LED backlight, world time setting for 31 time zones including an option to turn on/off daylight savings time, 5 daily alarms, hand shift to get the analog hands out of the way if you need to, a stopwatch, countdown function, and a calendar that’s preprogrammed until 2099. As a resident of Los Angeles whose definition of adventure is a hike on Runyon Canyon, I don’t particularly need most of these features, but it is comforting to know I’ve got a watch that can handle pretty much anything. In terms of looks, Casio has really tapped into what arguably many modern consumers are looking for in a watch. Using no loud, almost-cartoonish colors seen on some G-Shocks, and having a simple stainless steel bracelet and case (with protective black urethane surrounding the case sides and lugs) renders a really discreet-looking watch, by G-Shock standards. The Casio G-Shock G-Steel GSTS110D-1A bezel has “G-SHOCK” up top and “SHOCK RESISTANT” down at the bottom with smaller font “ADJUST,” “MODE,” “LIGHT,” and “SEARCH” on the sides with the corresponding button to activate the respective feature.

In simple black, the text is not too distracting but legible enough to be read easily on the Casio G-Shock G-Steel GSTS110D-1A. You’ll also notice the thin black urethane inner bezel for extra protection. Now, the addition of the black urethane around the face and as an inner bezel may not be for everyone as far as its looks are concerned (it reminded me of the Audemars Piguet Royal Oak Offshore, hands-on here in white ceramic), but it’s critical in retaining the shock absorbing abilities of the watch as steel isn’t quite so great at being shock absorbent. I have to admit that I really like the face of the Casio G-Shock G-Steel GSTS110D-1A. To start off, the outermost ring of the dial has minute indicators and the top portion of the hour indicators. I say top portion because the dial and hour markers slope down at an incline, and then flatten at the lowest level of the dial. It adds such a great depth to the dial, I really admire how much it makes the whole thing pop without using loud colors. You can really tell the designers of this watch put a lot of thought and care into making sure this watch has the boldness that a G-Shock promises, but with beautiful, almost subtle design cues that you can’t help but notice. Kudos to the design team for this attention to not only detail, but to the striking, aggressive design ethos of G-Shock. This watch does something really interesting by combining analog hands with three digital indicators. While this is nothing new per se, it is in contrast to the G-Shock MR-G which has the more high-end-appearing analog hands on the indicator dials, though digital is definitely more accurate. Does it make the watch look less “mechanical?” Sure, but that’s not really why you buy a G-Shock, especially if you’re more budget-conscious. The fact that this Casio G-Shock G-Steel GSTS110D-1A is almost a third the price of the MR-G helps take away the sting of losing those analog hands. If the analog hands get in the way of reading any of the indicators, pressing and holding the bottom button on the left side of the case for 3 seconds moves them out of the way and doing the same once again allows them to move back to the current time.