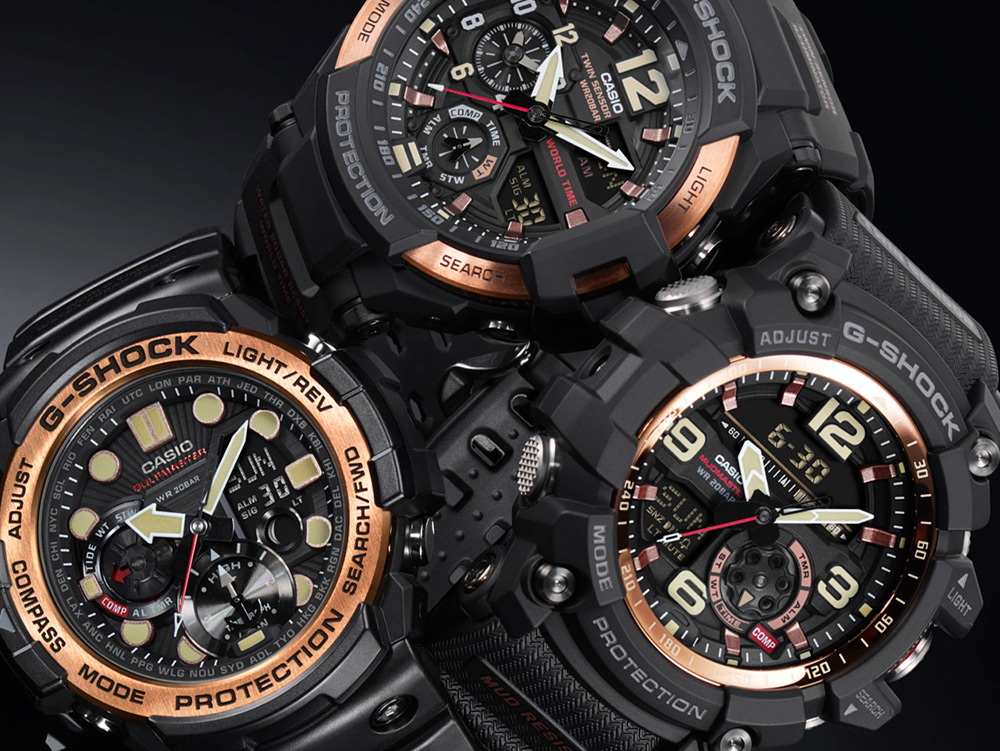 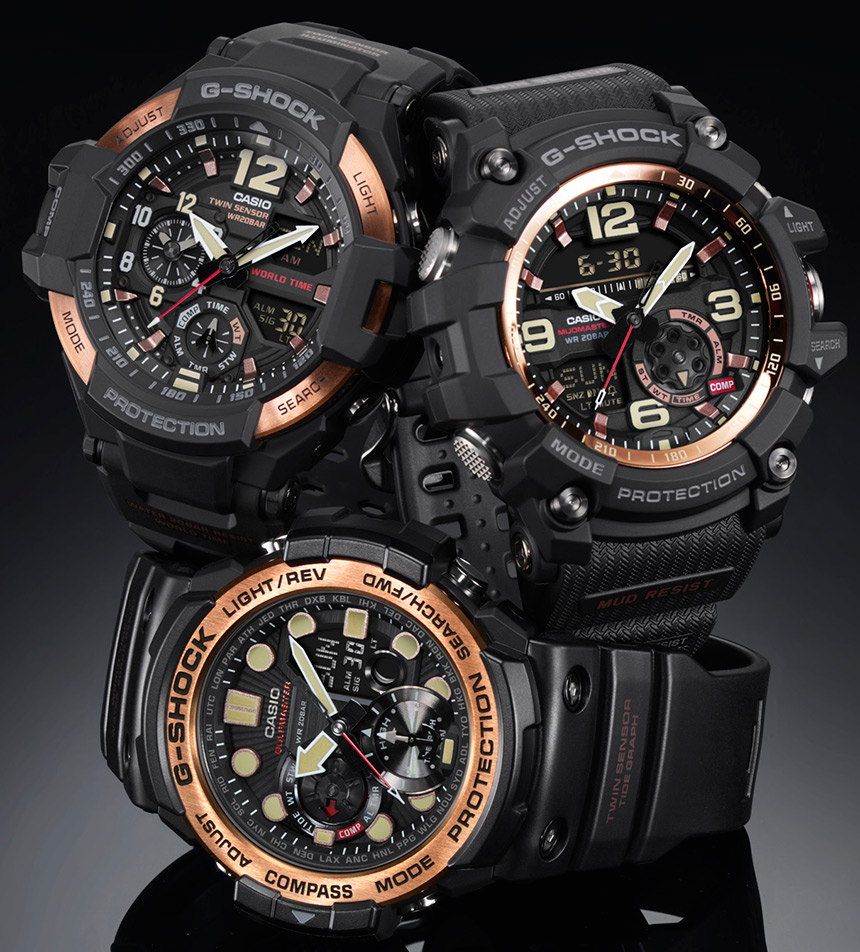 I’m a sucker for G-Shock watches in cool colors, and oddly enough, gold tones happen to look pretty neat on Japan’s original tech watch. I would not have guessed this by just seeing images, but once you put a black and gold G-Shock watch on, you more or less know what I am talking about. Today, Casio launched three “vintage rose gold theme” versions of its popular Casio G-Shock Master of G collection models including the reference GA1100RG-1A Gravitymaster, GG1000RG-1A Mudmaster, and GN1000RG-1A Gulfmaster. Each of these is a mid-ranged model in the larger G-Shock universe with sensible prices ranging from $250 – $320. 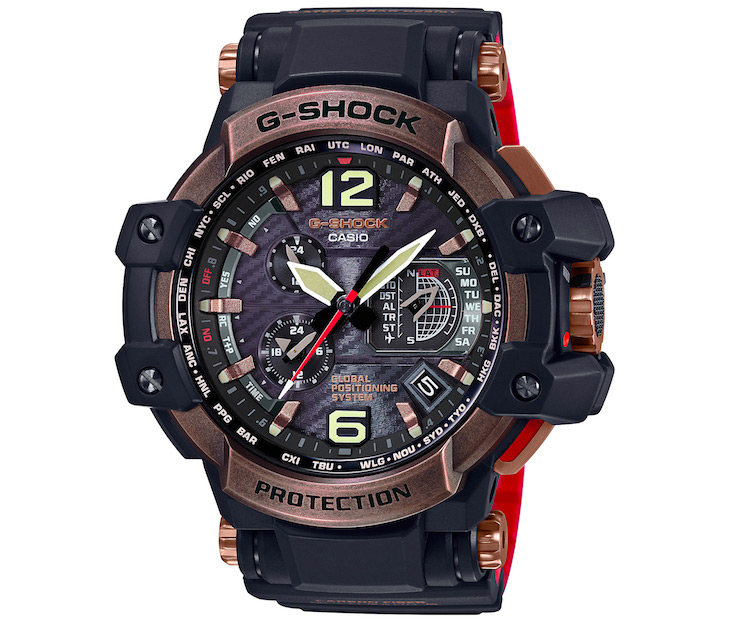 Casio G-Shock Master of G watches are among the most modern-looking of the clearly contemporary G-Shock watch family. The point of them is to offer a durable timepiece for a specific type of activity. The Casio G-Shock Master of G Mudmaster, for example, is engineering to keep water and dirt (and mud) out of the case in environments where that is an issue. The G-Shock Gulfmaster is for ocean workers on boats and rescue craft, while the G-Shock Gravitymaster is one of Casio’s all-purpose flight and pilot watches. 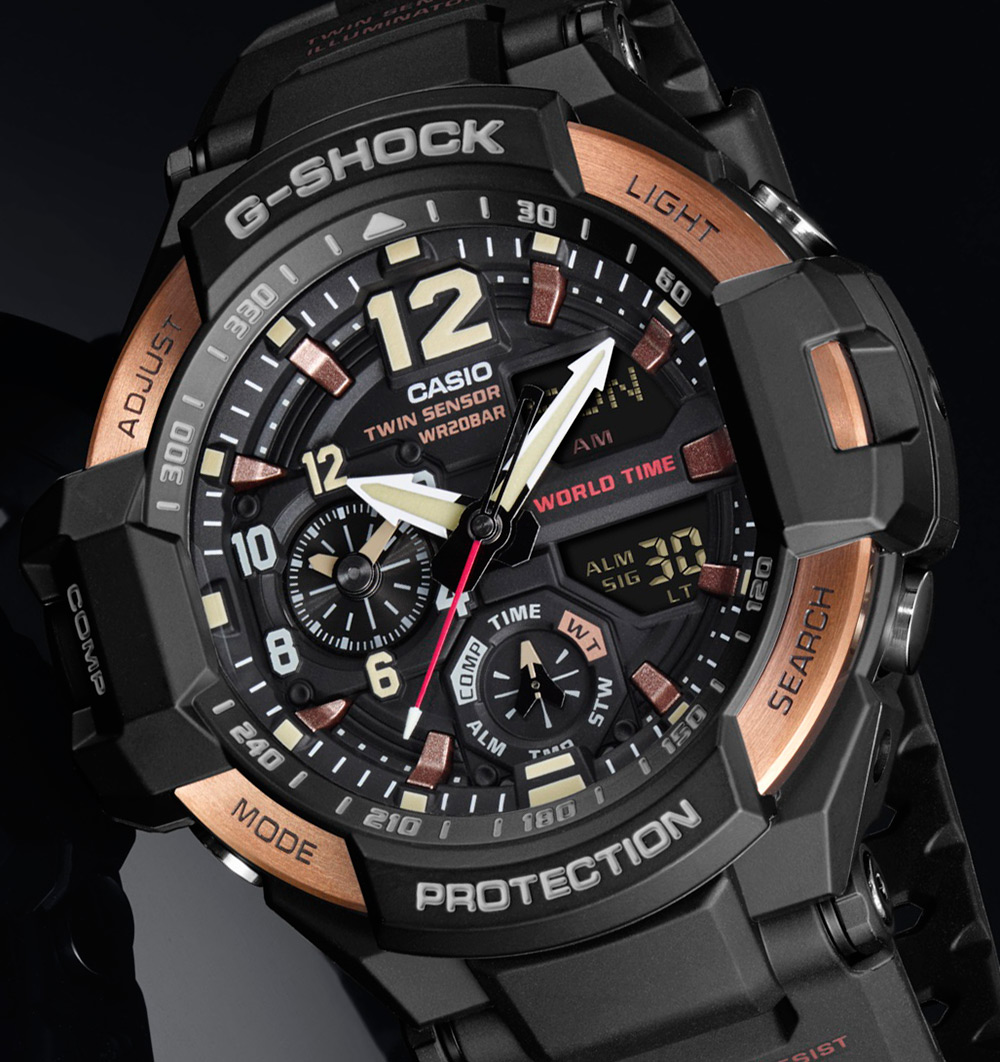 Each of these watches has its own unique combination of features relevant to its intended purpose. Few people really need all the durability and functionality that most G-Shock watches offer. The point is for them to make you feel as though you’d be ready for anything by having one of them. What’s important to know is that Casio puts just as much time into making these watches work well as they do into making them look cool. Well, perhaps not quite as much. Even though design is a big deal, Casio is first and foremost about functionality – which is a good thing. 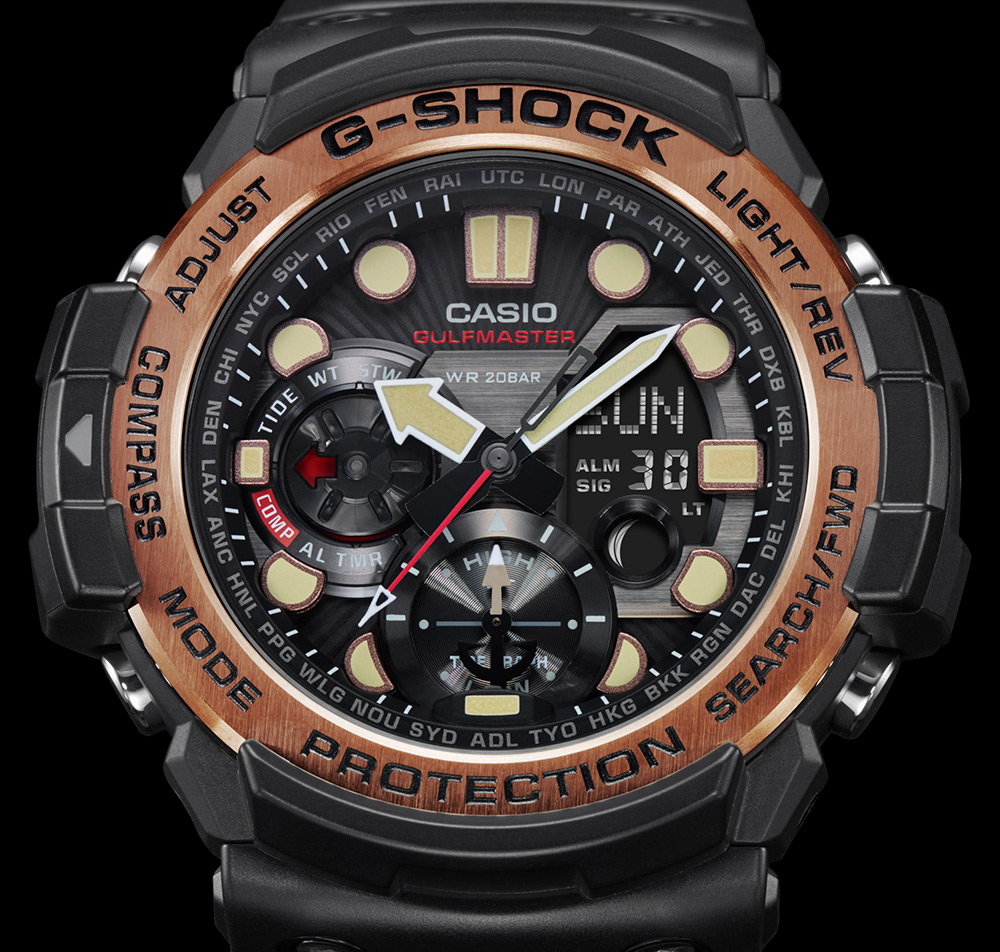 I believe that each of these models is a “Twin Sensor” which means that they have dual sensors for features such as a compass and barometric pressure. They are also analog-digital, insofar that the faces combine small negative (black with light text) LCD screens and various analog hands. This tends to be a good mixture of style and functionality – and according to Casio, watches with so-called “ana-digi” dials are among their best sellers, as many of their customers seem to prefer traditional analog hands. 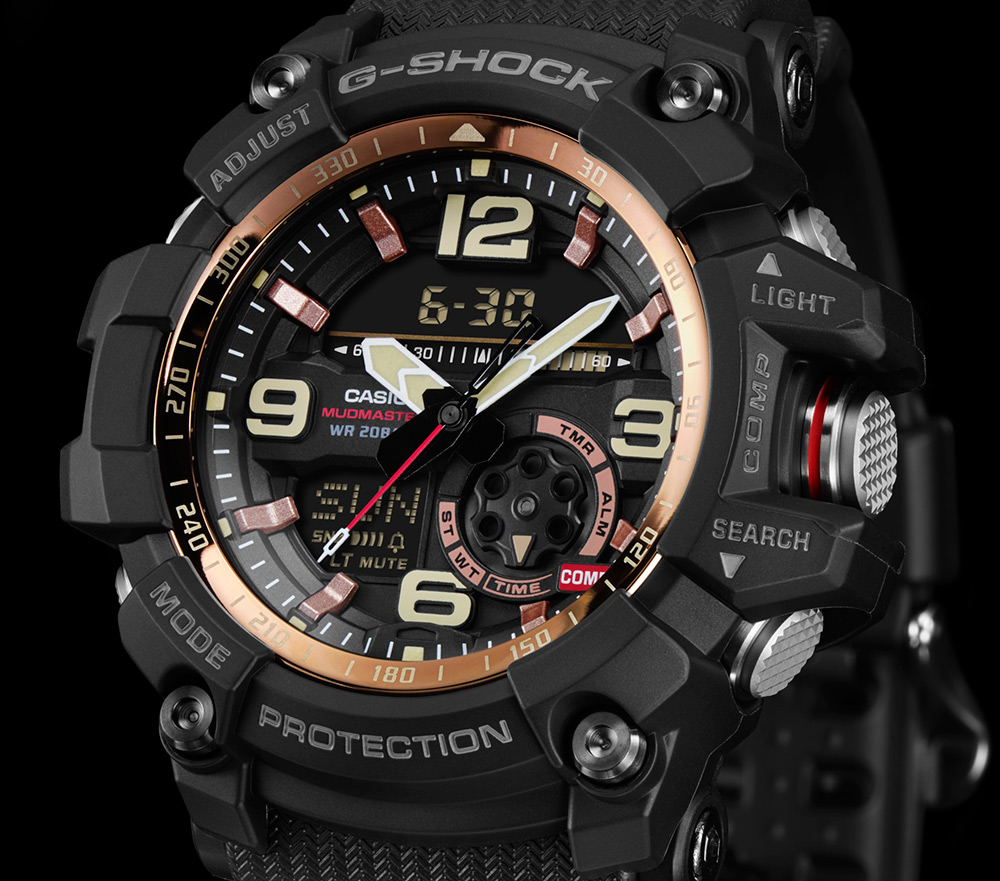 These “Vintage Rose Gold Theme” versions of the Casio G-Shock Master Of G watches are a handsome new look for urban and outdoor warriors who want a bit more swank in their step. I like how the matte black resin which makes up most of the case is contrasted by the rose-gold toned accents on the inner or outer bezels depending on the models. By “vintage,” I think Casio means that the polish on the rose gold-toned element is a bit softer and not as mirrored, as it might be on a “new-style” watch.

Given that these are Casio G-Shock Master of G watches, they aren’t smaller is size (at all). With that said, they are very wearable and designed to be comfortable. Sizes are 52.1mm wide for the GA1100RG-1A, 55.3mm wide for the GG1000RG-1A, and 53.4mm wide for the GN1000RG-1A. Prices for these Casio G-Shock Master of G “Vintage Rose Gold Theme” watches are $250, $320, and $300 respectively. Availability in stores or online will start in February 2017. If you want to go up from here and love Casio and gold-tone, then allow me to recommend Casio’s latest limited edition G-Shock MR-G G1000 Gold Hammer Tone watch that comes with a $6,200 price tag. shopcasio.com