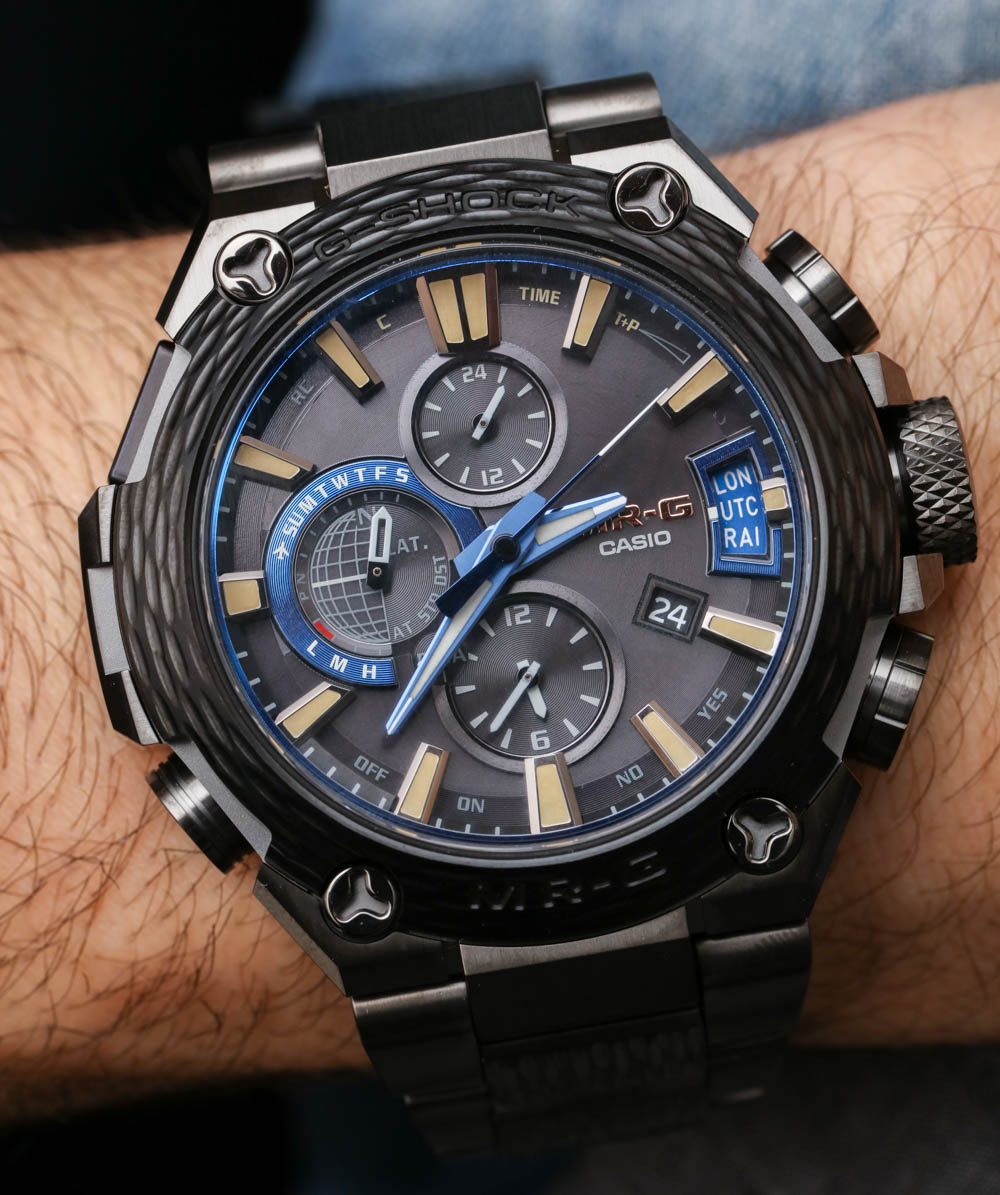 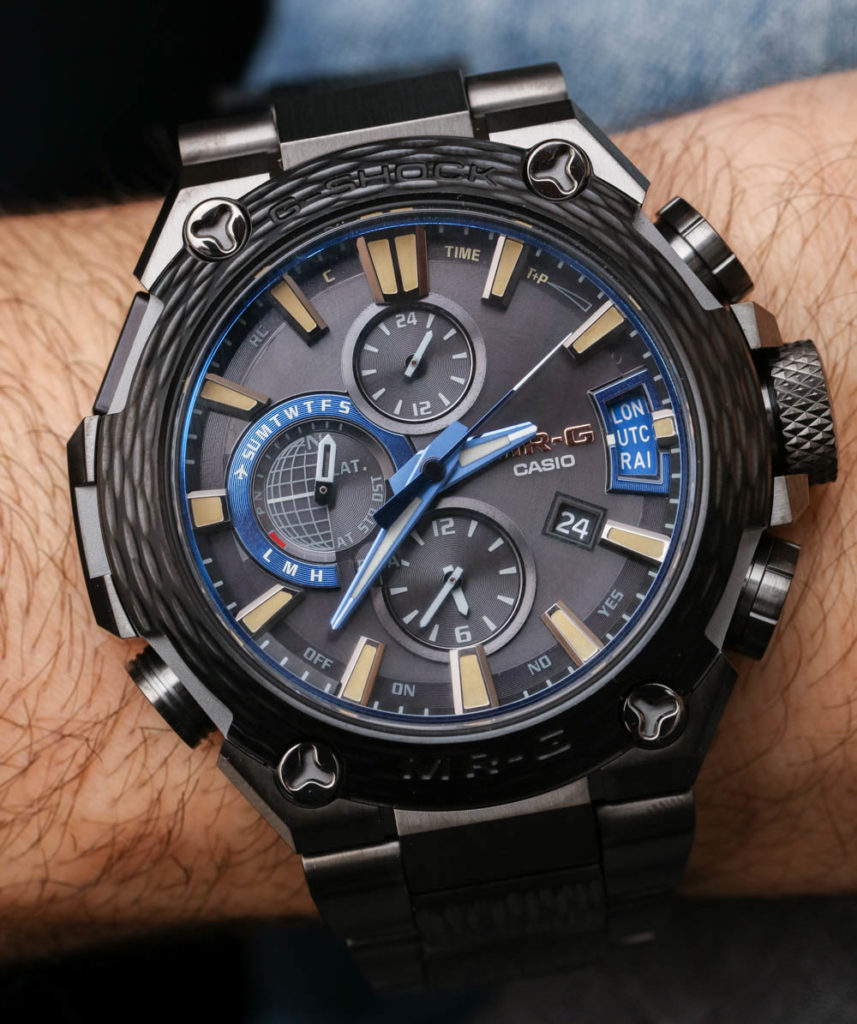 The flagship timepiece for Japanese Casio at Baselworld 2017 is the technologically novel and artistically compelling G-Shock “Mr. G” MRGG2000HT-1A with the new “Casio Connect” Bluetooth functionality. The MRGG2000HT is an updated version of the G-Shock MRGG1000HT from 2016 (hands-on here) – both of which feature “hammer tone” hand-hammered finish on the hardened titanium cases. This artistic process which is done by a master craftsman in Japan is even more interesting-looking on this 2017 Casio G-Shock MRGG2000HT model, which is titanium with DLC coating on the bezel which is actually deep blue in color. 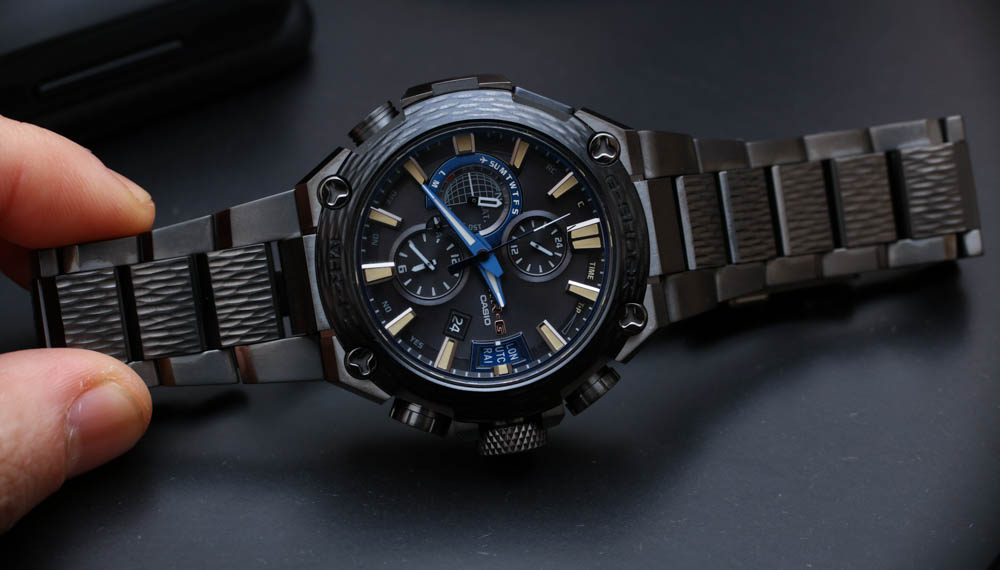 In addition to interesting looks and the luxury price point, what is important here is the new Casio movement which is being debuted in the Casio G-Shock MRGG2000HT-1A along with accompanying software. The brand is introducing what they call “Casio Connected,” and in essence, it is the brand’s new approach to how Bluetooth and smartphone connectivity should interact with a good number of their analog watch products. Overall, I think Casio is on to something really cool here. 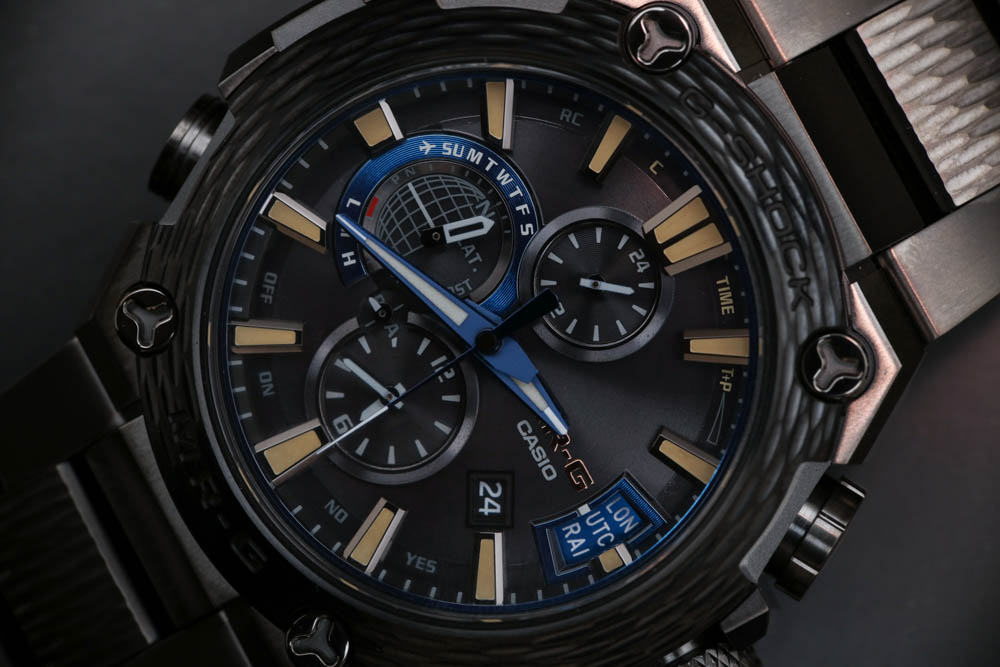 Casio Connected includes three things. First is “Self-Charging,” which simply implies that the watch’s internal rechargeable battery is charged by sunlight and other ambient light. Second is “Self-Updating.” This refers to the watch’s ability to automatically update the time to the current time zone. Casio has previously done this in various ways, but the new system employs all three at the same time. First, the watch attempts to use Bluetooth, connecting to a linked smartphone and updating the time up to four times a day. If that fails, then the watch attempts to locate a radio signal from a local atomic clock. If that fails, then the watch uses its GPS signal antenna to update the time. Thus, this new generation of “Casio Connected” movements such as that in the Casio G-Shock MRGG2000HT-1A use internet time through your phone (using Bluetooth), radio signals, or GPS signals in order to update the time. 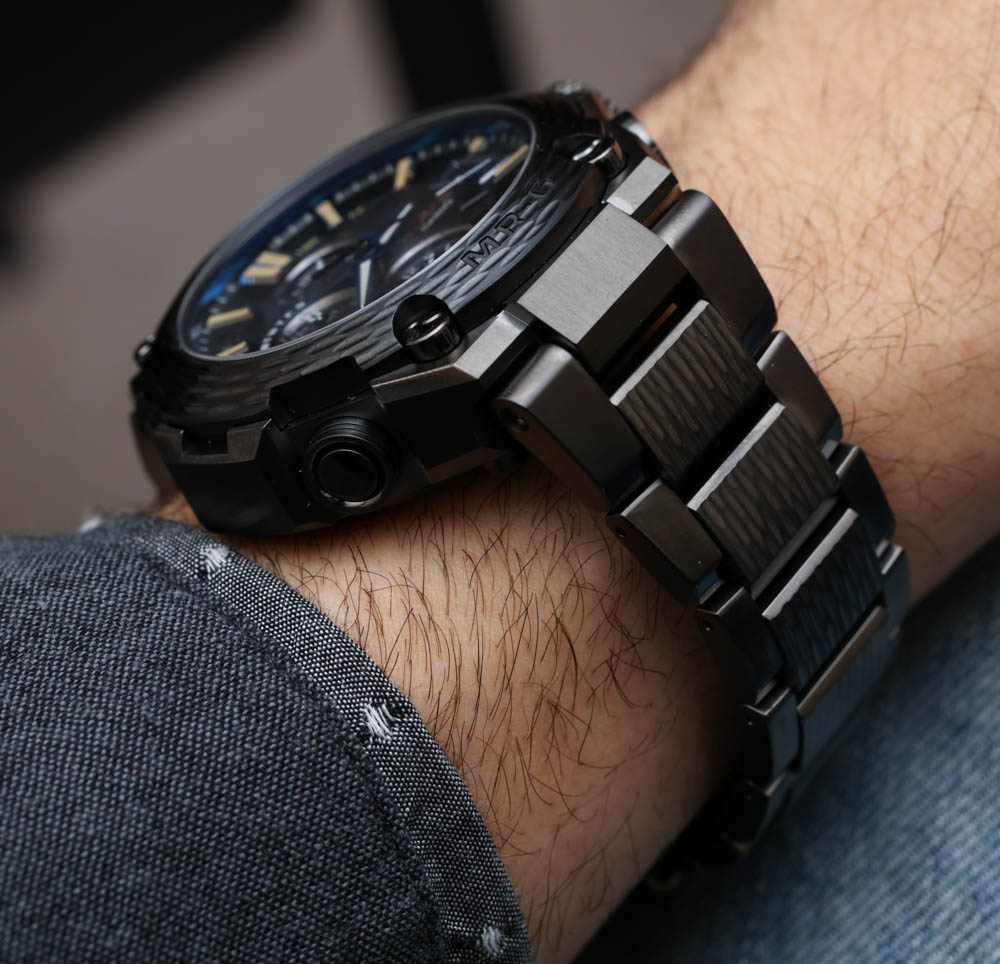 The third “Self” element is “Self-Adjusting,” which is rather clever. What this does is again use Bluetooth to update the software in the watch with the latest global timetables using information from the internet. This means the watch always knows what time zones various areas have and daylight saving dates and times – as there are changes each year. The idea is for your watch to always know how regional time differences may fluctuate and update the instructions on the watch automatically. The idea, again, is for your high-end G-Shock watch to always be operating, and always be accurate with little (or no) input from the user. 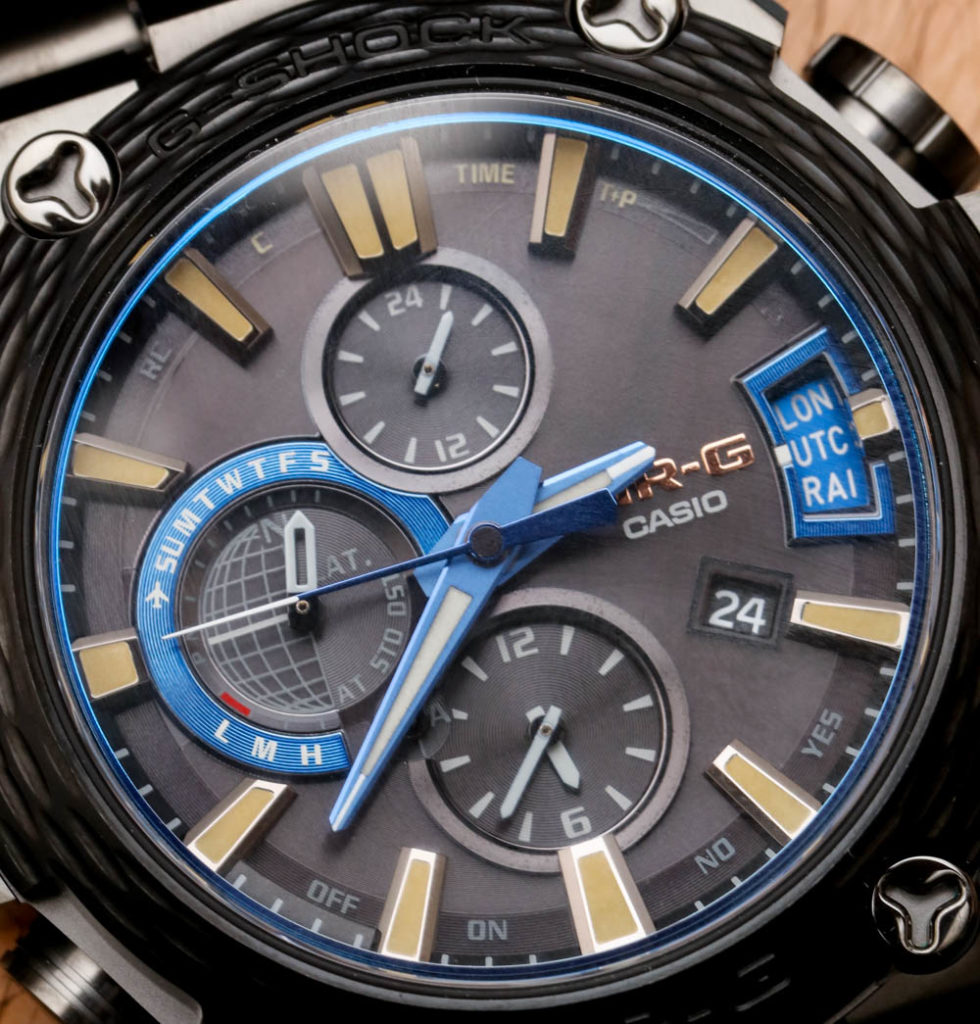 Along with all of this is the Casio Connected app for your smartphone (not entirely sure of the specific name of the software yet – Casio also calls it “MR-G Connected”). This is a wonderful concept that I was able to preview with Casio. Basically, it is the exact type of connection between your phone and watch that you want. Gone are features no one really wants such as missed call notifications on your watch. The app and Bluetooth are instead used to control/adjust the various features of the watch (time zone, alarms, etc.) as well as to act as sort of “activity tracker” for your watch. 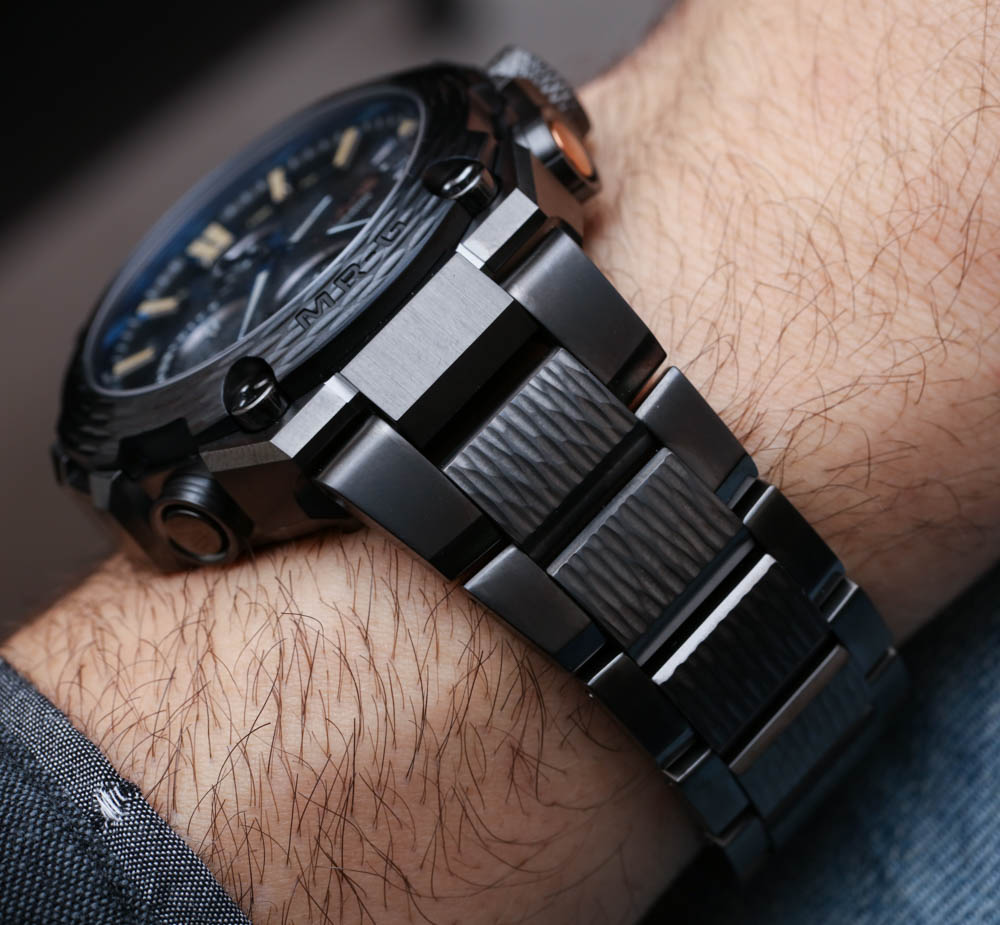 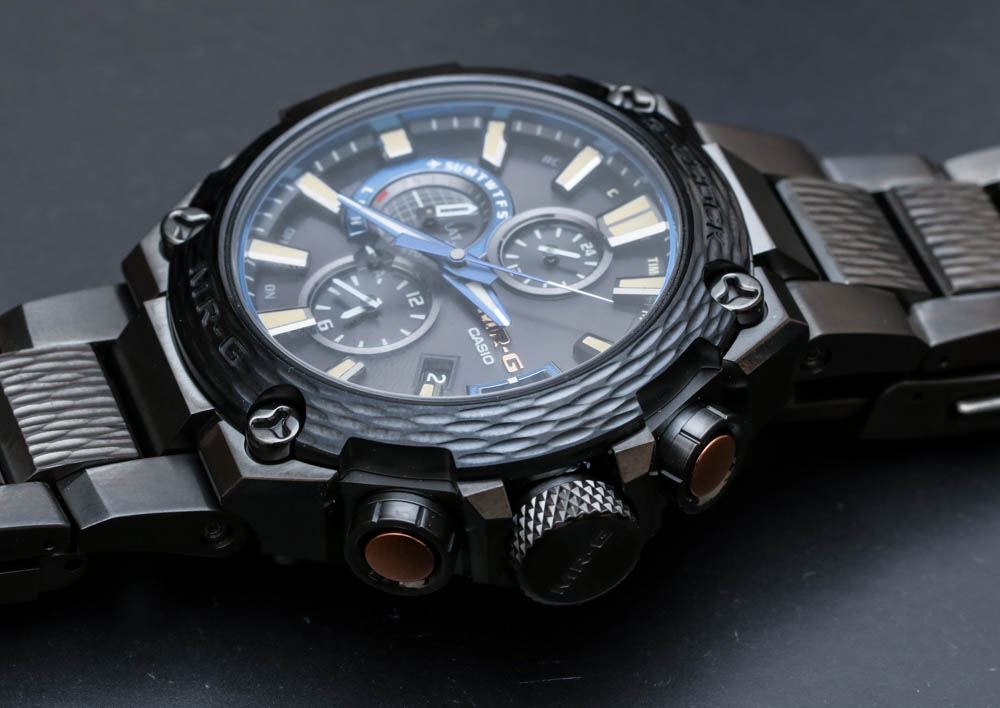 Casio shared a few other features of the software such as a geotagging feature available on some of the watches, including the Casio G-Shock MR-G MRGG2000HT-1A, I believe. The concept is that you press down a particular button on the case and it sends a signal to your phone to tag your location. It uses GPS to record a specific location and time you were there. You can then graphically create interpretations of your trips using this data and the software. Stuff like this has practical utility for pilots, and for others, it can just be fun. 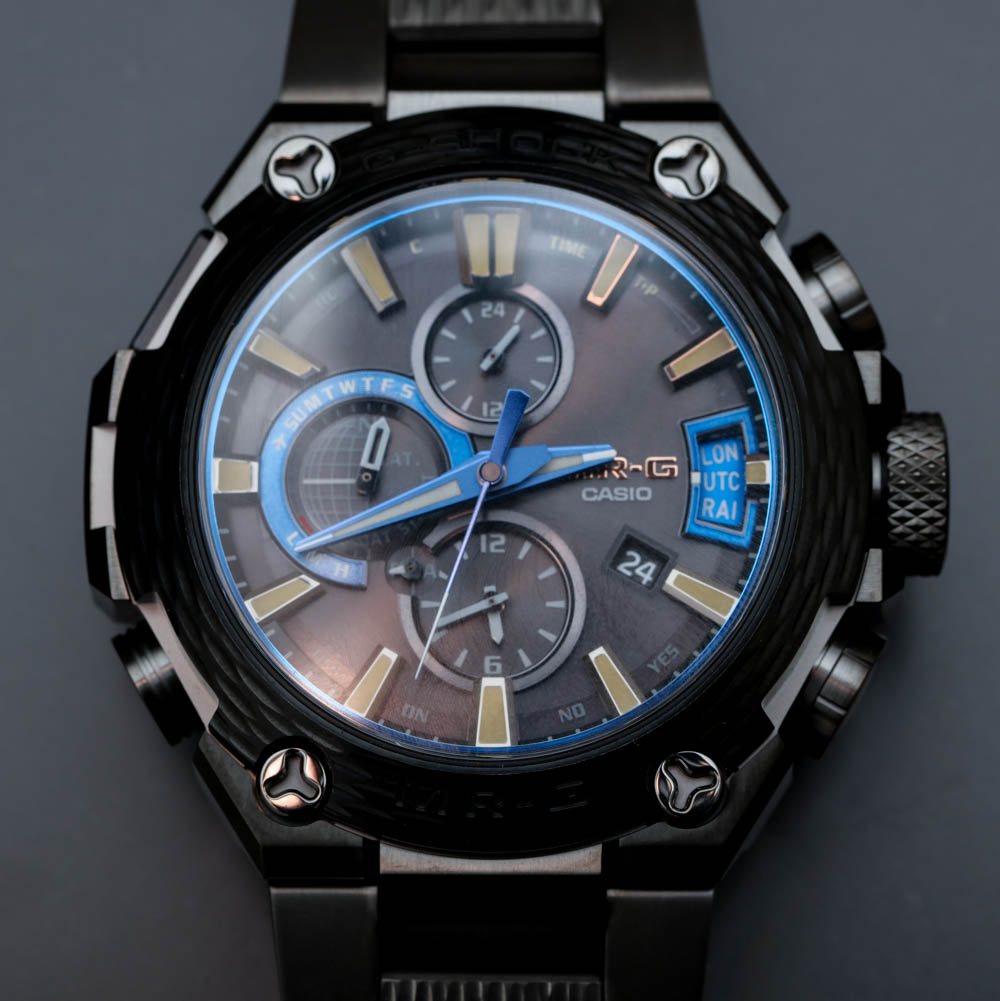 The important point is that the Casio G-Shock MR-G MRGG2000 combines the best of Casio’s technologies along with Bluetooth for the most high-end and interesting experience ever. Moreover, the movement has been improved on a more hardware-level basis. New metal parts are used in the movement which are anti-magnetic, and the photovoltaic cell which generates power now has some special type of “shadow-dispensing” feature which allows it to more efficiently generate electricity. 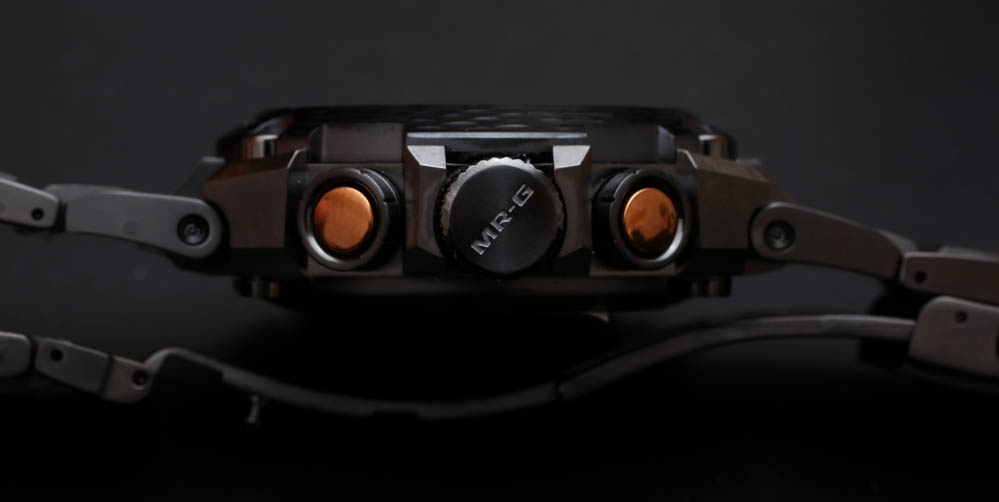 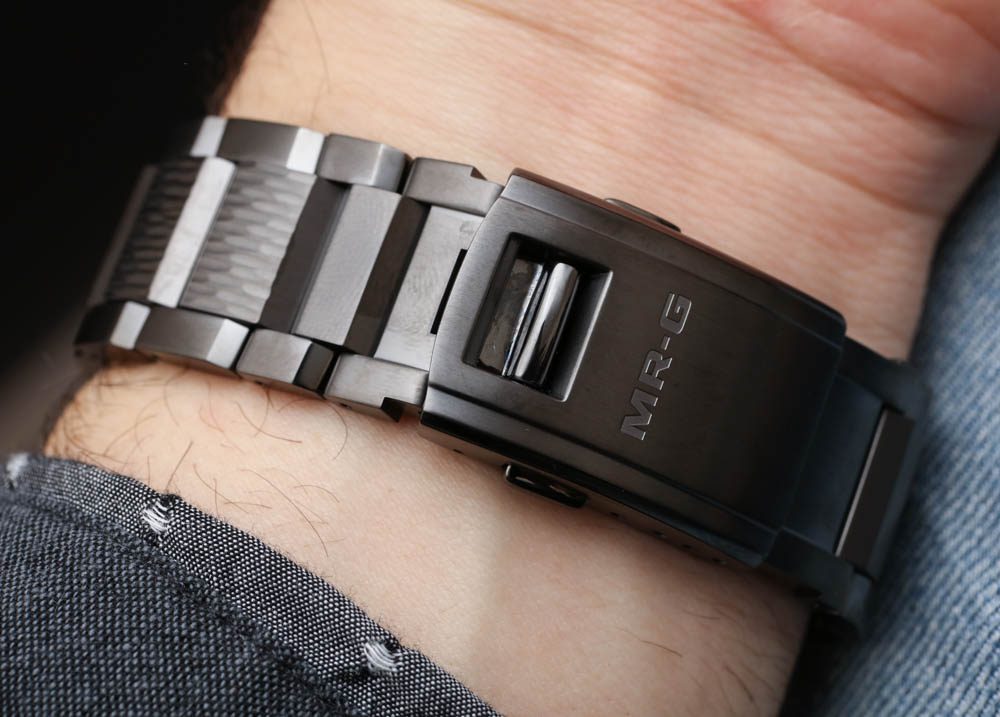 Yes, the watch is expensive, but the Casio G-Shock MR-G MRGG2000 has a number of new features and an authentically hand-crafted, super durable case that looks cool. This is among the most niche luxury watches around, but for those who understand it (and can use it) these limited-edition Casio G-Shock MR-G watches are exotic treats made by one of the most important wrist watch makers in the world.

The Casio G-Shock MR-G MRGG2000HT-1A is a hefty 49.8mm wide in titanium. The titanium is supposed to be specially hardened (according to Casio, it is five times harder than normal titanium), and then DLC coated. The 200m water-resistant titanium case as well as the bracelet are designed to be extremely shock-resistant. Over the dial is a sapphire crystal, and the dial has both luminant and can be illuminated by a white LED backlight. 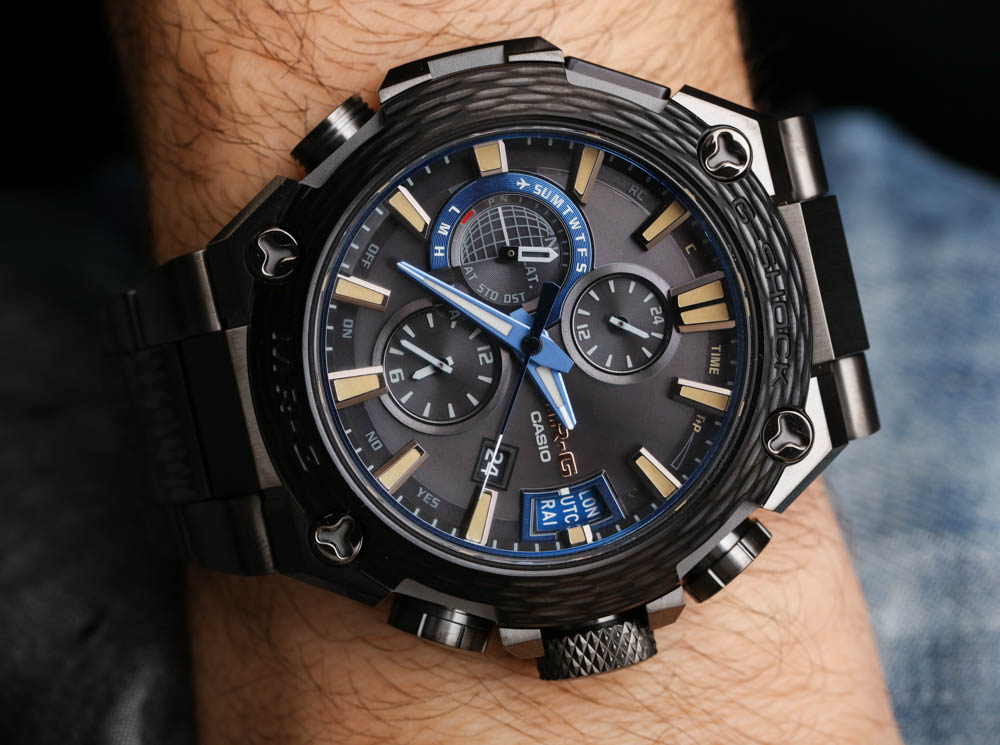 The very cool “Hammer Tone” technique (which is apparently called kasumi-tsuchime) on this model is once again applied to the bezel and the center links on the bracelets. With the new movement is a new dial, which isn’t the most elegantly designed but has a lot of practical information. Personally, I wouldn’t have made the hour markers and hands different colors. Second, as a fan of more visual symmetry, I feel as though the dial is a bit “left-heavy.” With that said, the dial information is useful, including two 12-hour time zones, a 24-hour dial, day of the week hand (which can double to indicate other information), date window, and time zone city window. This is the first time I’ve seen dual indicator windows on an MR-G or otherwise G-Shock watch. 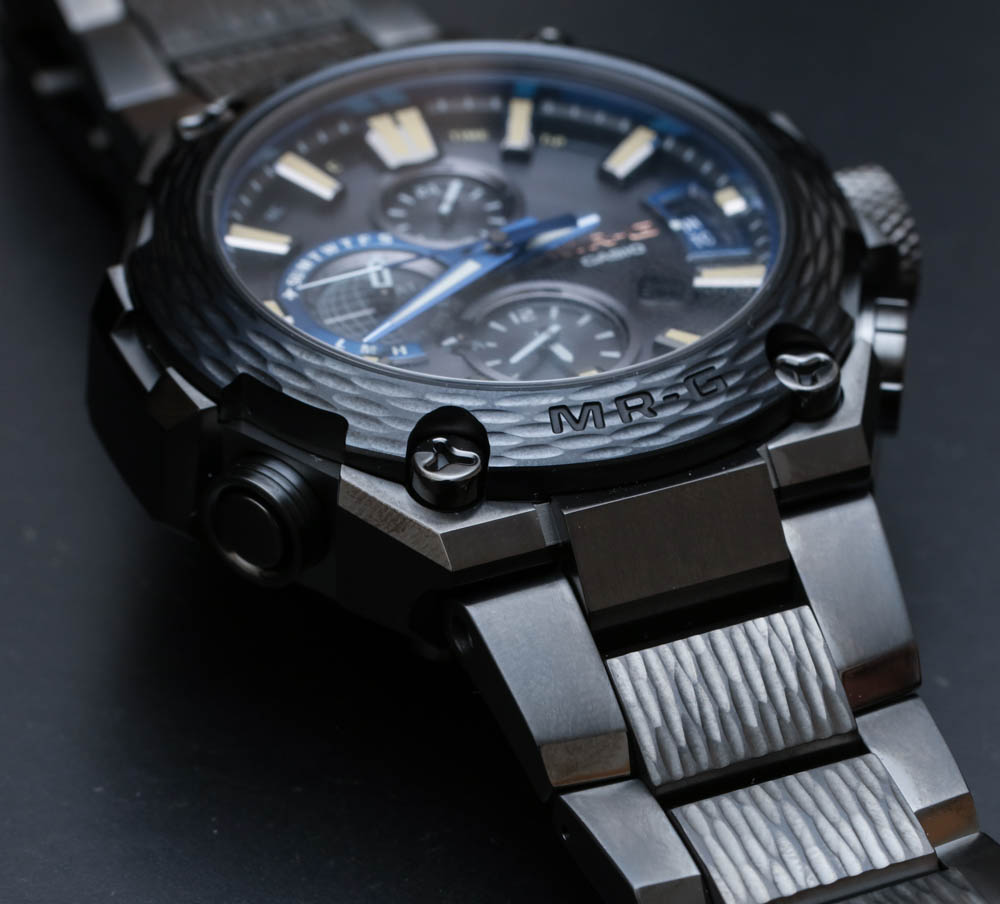 The Casio G-Shock MR-G MRGG2000HT-1A Hammer Tone Bluetooth limited edition watch is the fanciest product to include the new Casio Connected suite of technologies, but I am pretty sure that more Casio watches in the future will have them. I have a feeling in a few years time the majority of Casio watches will at the least have a Bluetooth Connect feature – even if they don’t have other goodies such as GPS. This year, in 2017, a lot of this technology can be found in other Casio watches. There is, for example, the more affordably-priced Casio G-Shock GPW2000 Gravitymaster that has a very similar movement in a more traditional-style G-Shock (albeit a stunning watch) at a lower price. Casio also has the WSD-F20 GPS smartwatch that will have these features. 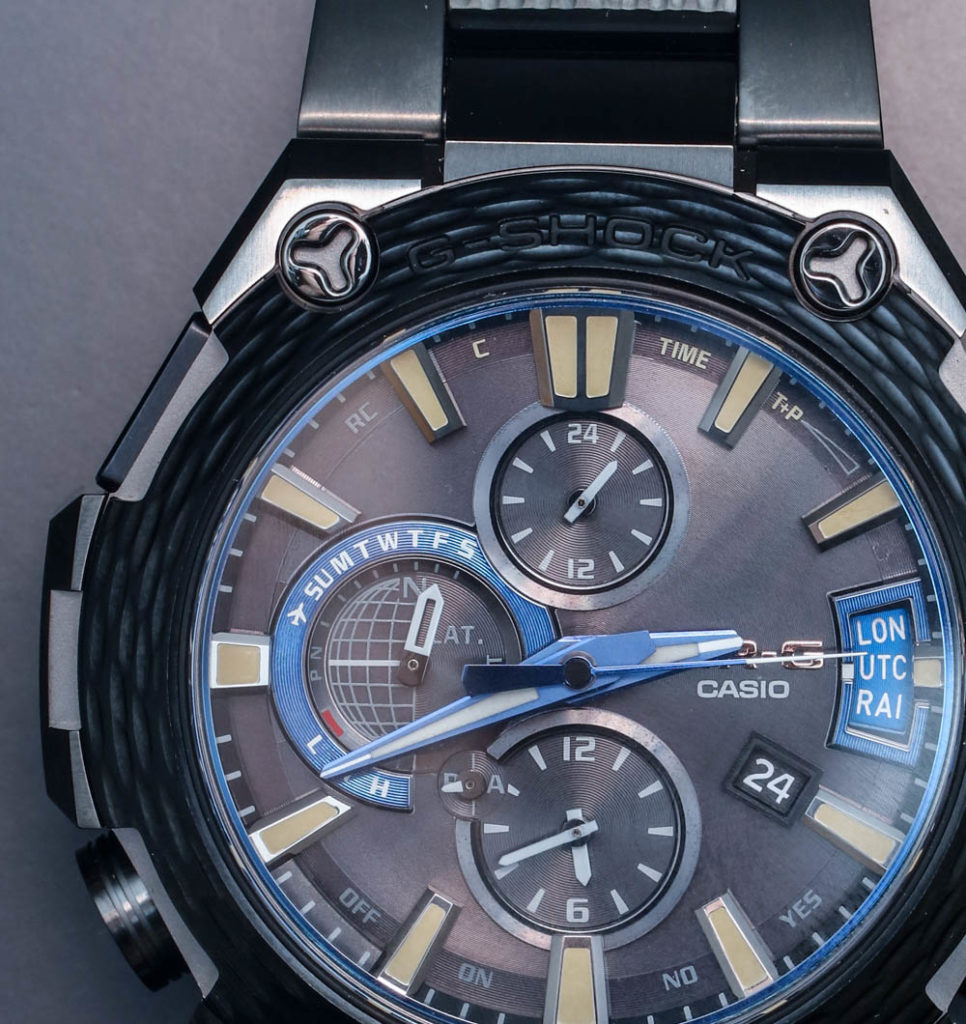 The person who is getting this or any other Casio G-Shock MR-G is looking for the ultimate combination of Japanese timepiece technology and cultural craftsmanship. So long as Casio continues to sell these high-end models well, it will keep making them. A very neat watch for 2017, the Casio G-Shock MR-G MRGG2000HT-1A will be limited to 500 pieces and has a retail price of $7,400. gshock.com