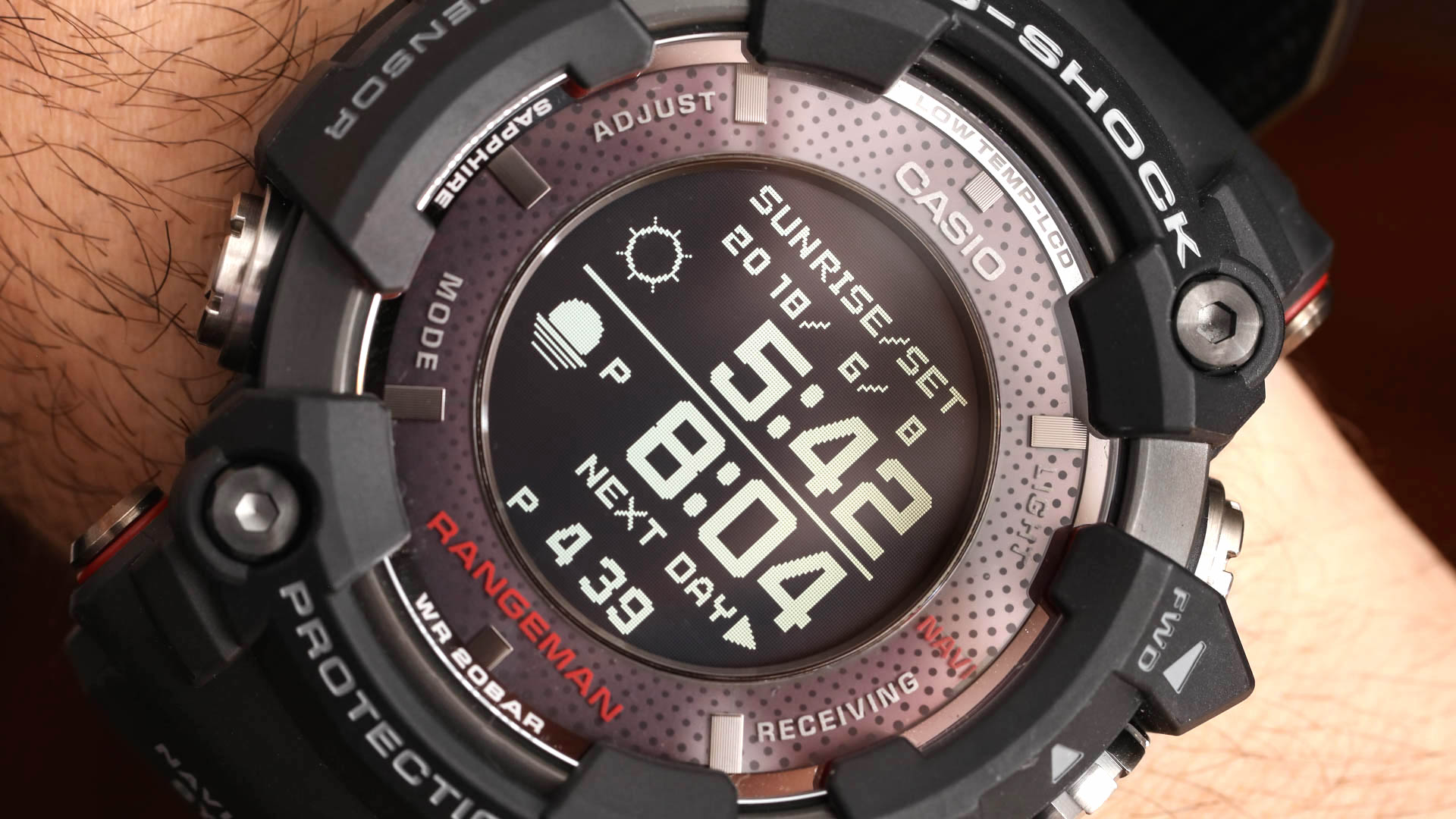 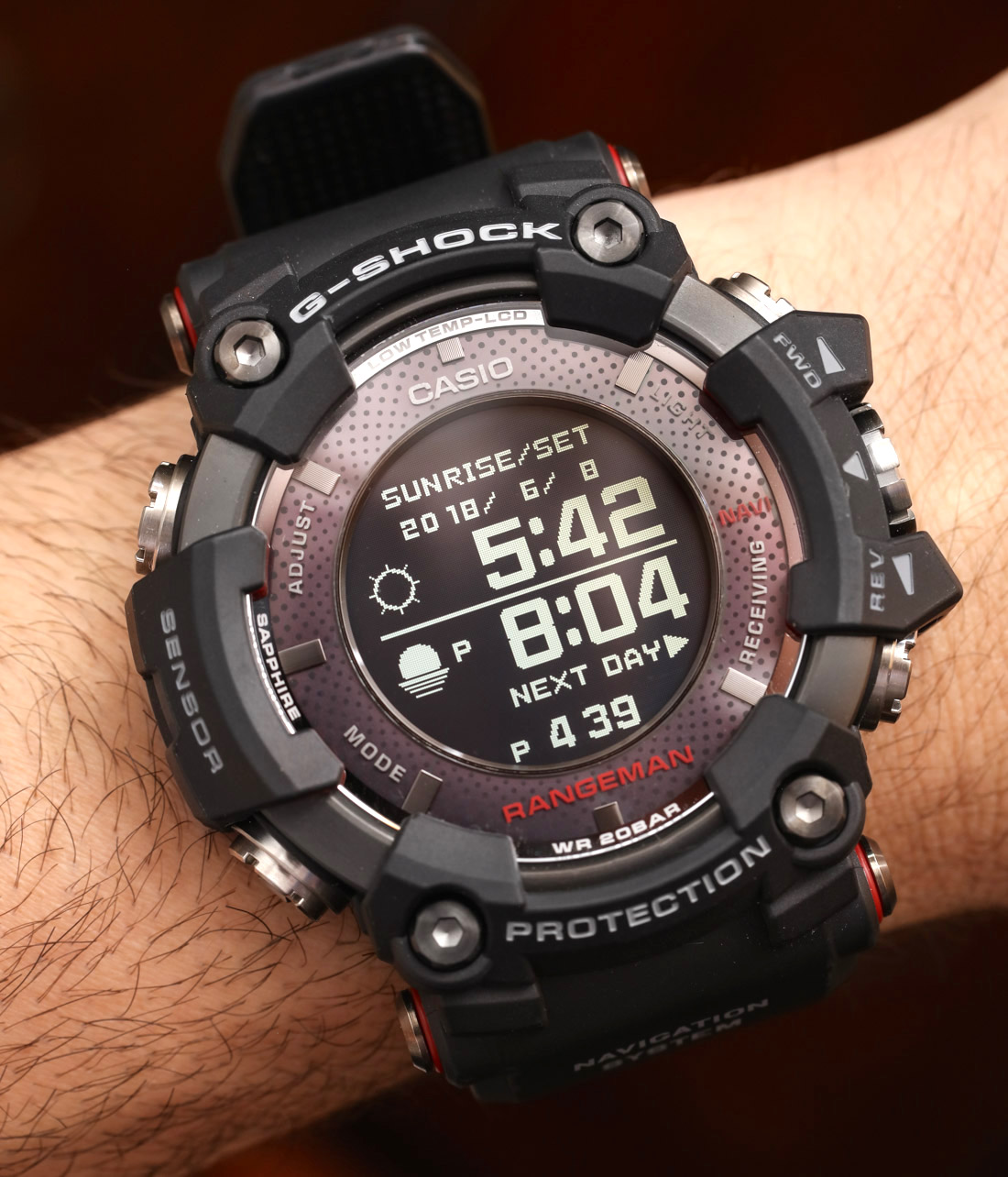 For 2018 Casio totally redesigned the popular G-Shock Rangeman with the GPRB1000 collection we introduced on aBlogtoWatch. The newest iteration of Casio’s popular “multi-sensor” G-Shock takes the concept of the product in a bold new direction with a product that is one of the most satisfying “marriages” I’ve experienced between a traditional G-Shock and a smartwatch. To put the Rangeman GPRB1000 in the same category as an Apple Watch or Android Wear smartwatch would be a mistake. Both products use Bluetooth, communicate with a phone, and have GPS built-in. The differences, however, are what make the new generation of Casio G-Shock Rangeman a bridge product for traditional watch lovers seeking something both advanced and bearing utility they never would have expected in a G-Shock just a few years ago. At the same time, Casio has succeeded in producing yet another rock-solid durable survival and adventure watch that really ups the ante with the competition out there. 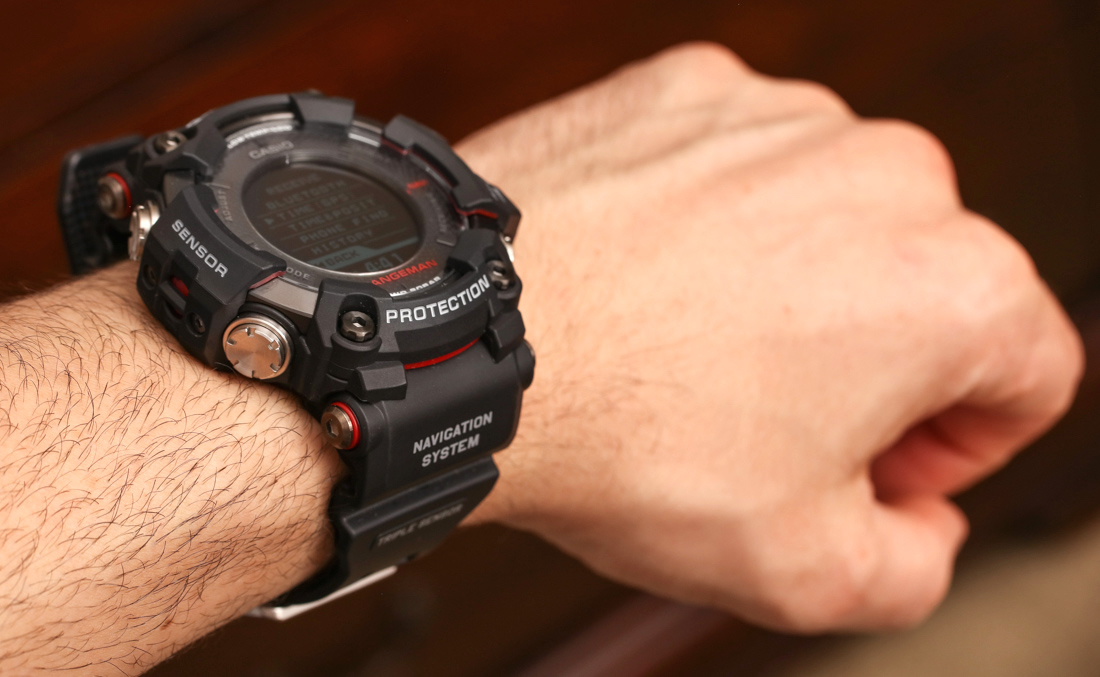 Casio makes a full-on smartwatch with the ProTrek WSD-F20 (the most recent generation model), which is powered by Android Wear. This Rangeman, however, has a new proprietary operating system that replaces a very familiar system I’ve become accustomed to for almost two decades now. Casio fitted the GPRB1000 models with a new screen, input system, as well as operating system. It takes a little bit of getting used to, but it is rather logical and intuitive. The most important thing for you to know is that the crown at 3 o’clock is now a scroll wheel (and pusher) and is used to navigate a lot of the menu items. It is one of five input devices around the case, as the all-metal buttons are made in assuring high quality.

This Rangeman is now part of Casio’s higher-end “Master of G” collection, which among other things, means that these watches are actually produced by Casio in Japan. Master of G watches tend to be of a higher quality overall, and come with a more premium price compared to what many people expect in a G-Shock. With that said, even at a retail price of $800 there is a lot of watch and technology packed into this device. The Rangeman GPRB1000-1 is easily among the most advanced products Casio has ever produced – and we know it will only get better. 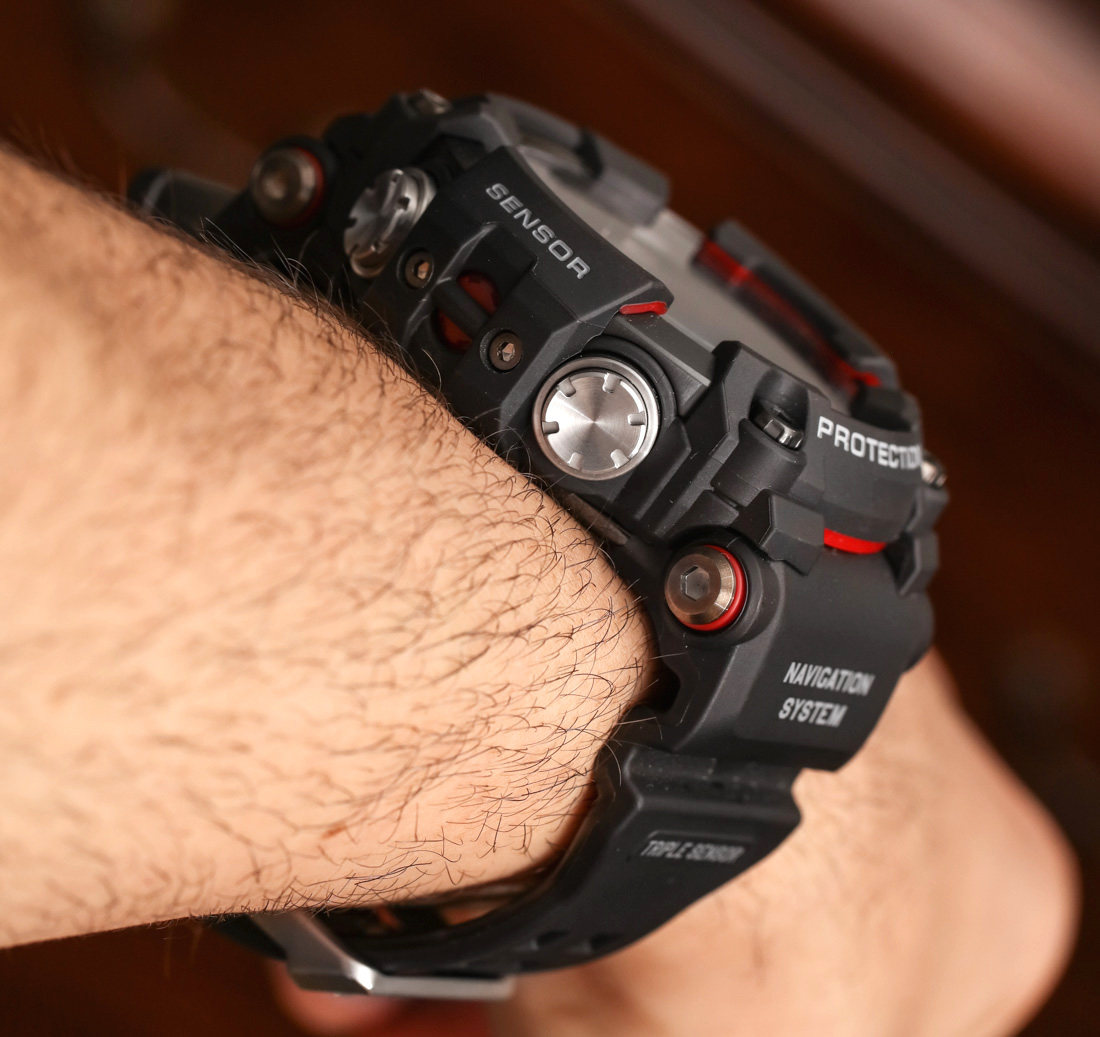 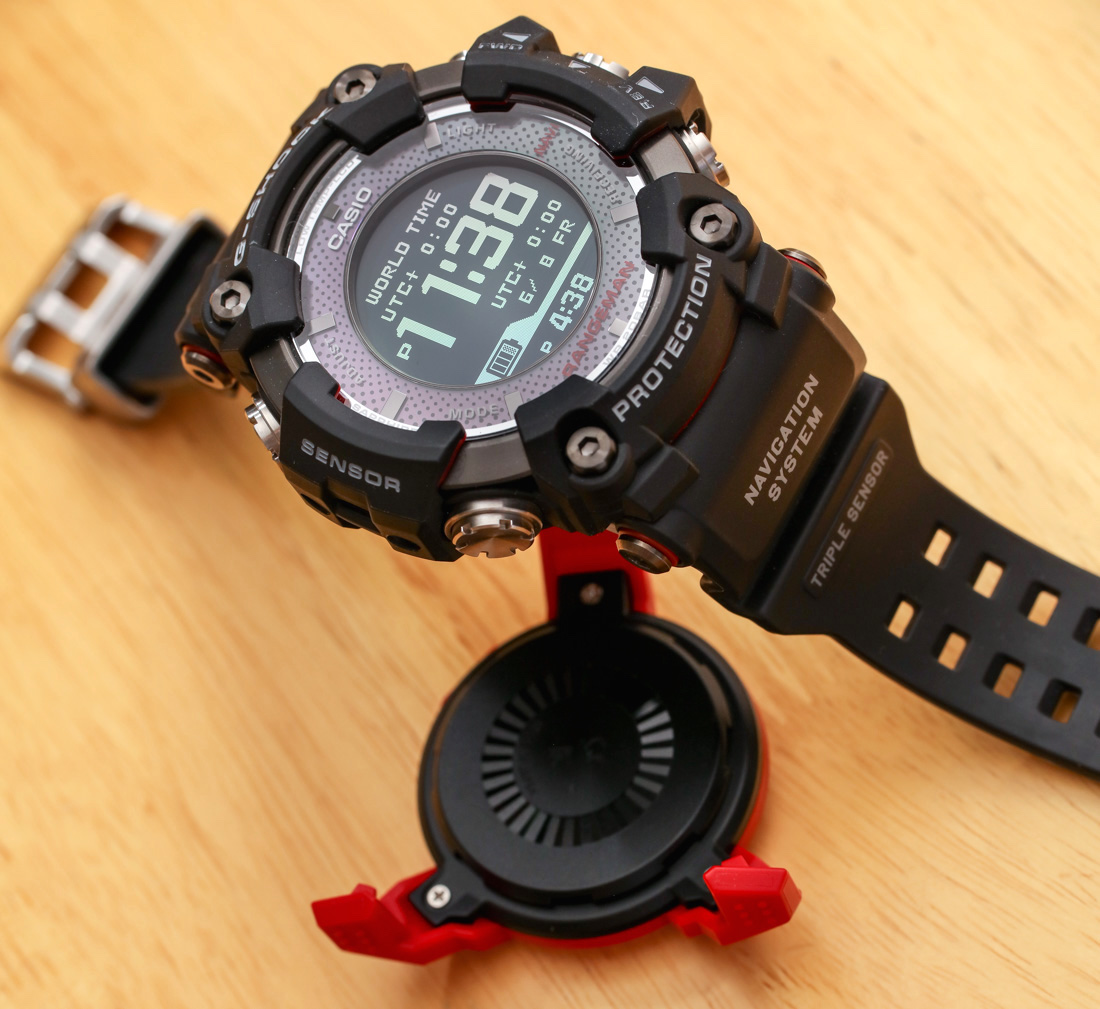 Let’s talk downsides first – because there is a “big” one that many watch lovers will need to know about. Despite Casio’s regular and fervent focus on trying to miniaturize technology, the G-Shock Rangeman GPRB1000-1 is a large (but not heavy) timepiece. It is wearable – but for small wrists such as mine, in a bit of a comically large way. Casio does everything possible to make the GPRB1000-1 comfortable and wearable, but for those with modestly-sized wrists the watch’s dimensions might easily look disproportionately large. The case is not very heavy at 142 grams but large at 57.7mm wide, 60.3mm long, and 20.2mm thick. That also means a pretty long strap. In all, this is an ideal adventure watch worn over a jacket or suit of some type or for daily wear on larger wrists. If you are going hiking or trekking with the watch on you certainly can, but some might prefer a more “out of the way” timepiece unless they are using the navigational features on a regular basis. Casio will make watches like this smaller in the future, and for the time being we can marvel at all this technology packed in what is still a wearable package. 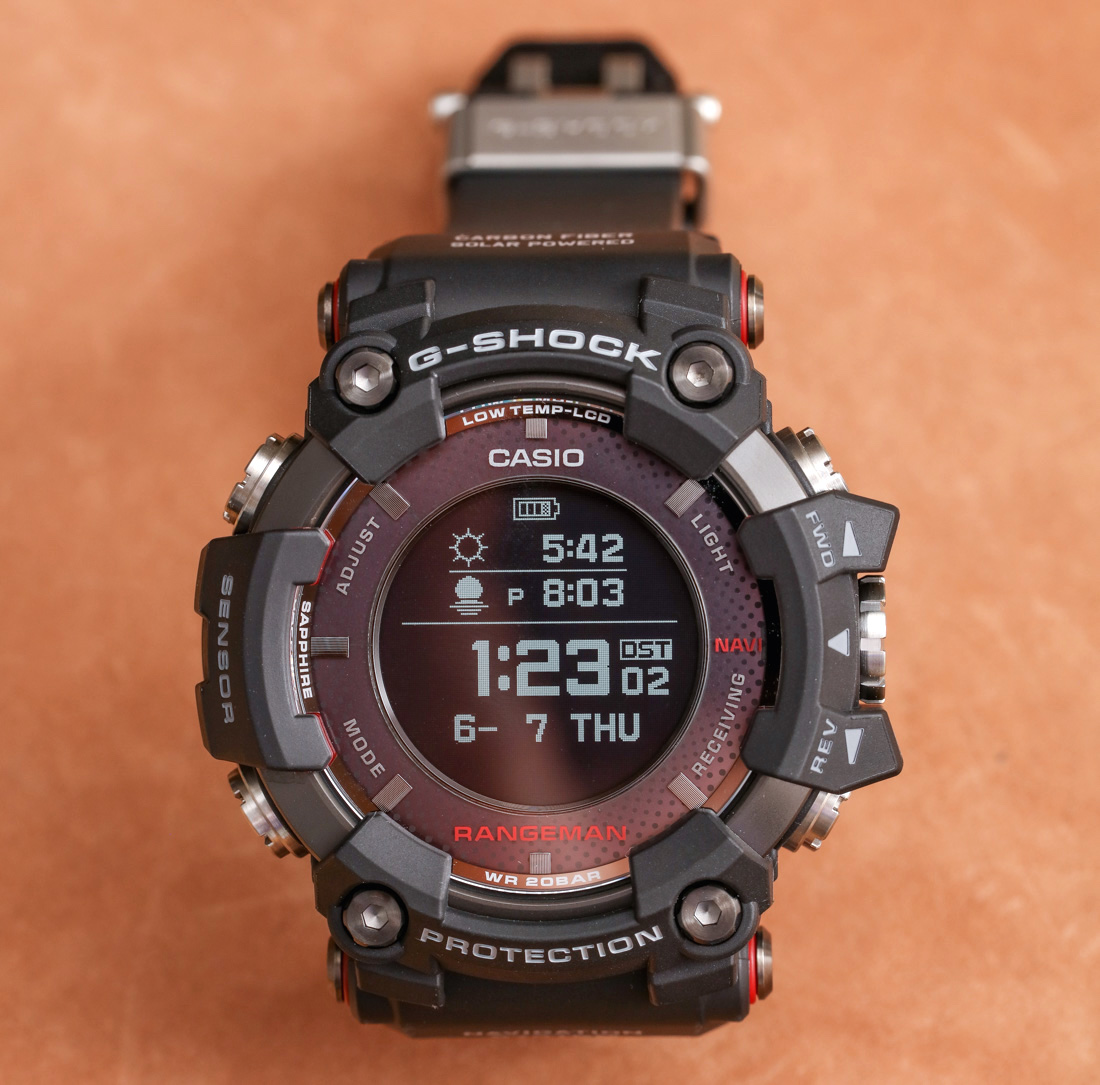 This review will mostly talk about the features and functionality of the G-Shock Rangeman GPRB1000-1 as opposed to a field test. I envision creating a more field-test style review after having more outdoor experiences with the the product. Casio makes the GPRB1000 in both the GPRB1000-1 and GPRB1000-1B model variants for now. These are just color differences and by the time you read this review there is a good chance Casio will have produced other color variants as well. The tough resin case armor is what makes it a G-Shock, and as such the watch has the same 200m of water resistance and swathe of anti-shock, anti-vibration, and other durability features the G-Shock is known for. The case protects an inner metal case that now has a black ceramic caseback. The crystal over the dial is sapphire and Casio uses a higher resolution screen which is new for the G-Shock family. Note the use of carbon tubes, which are used to secure the straps to the case. This recent innovation from Casio really helps to make sure the watch will not come off your wrist, even if violently pulled. 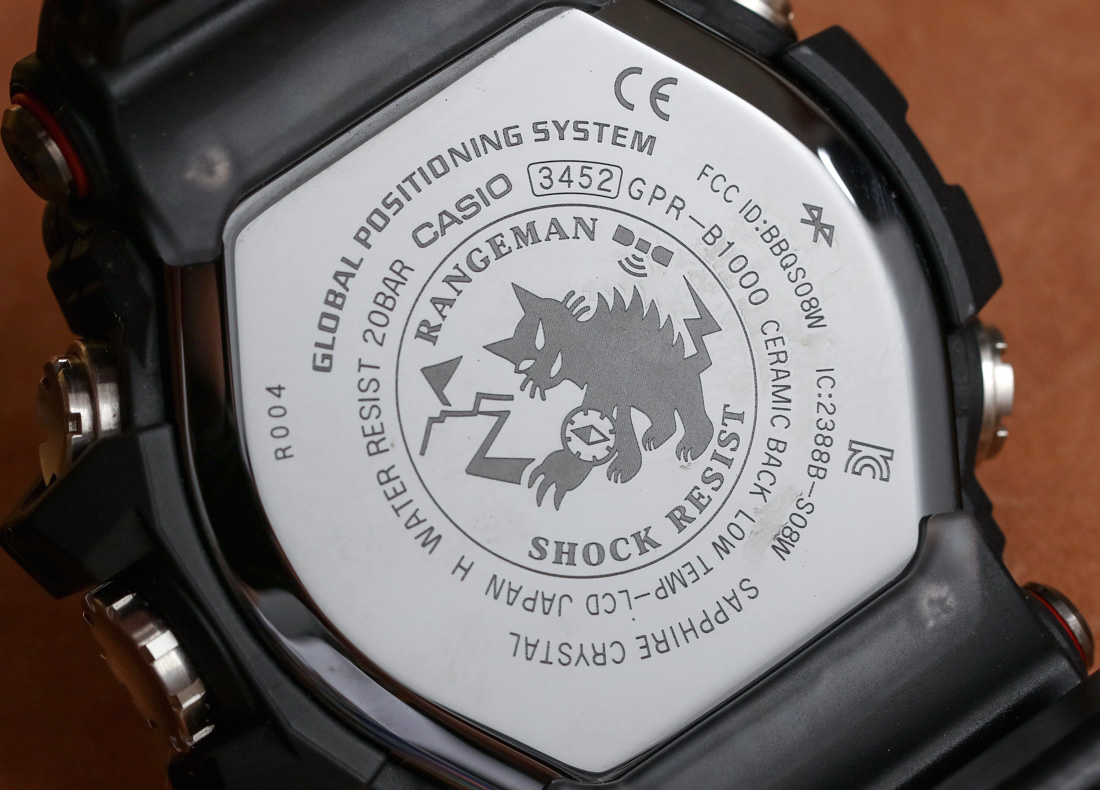 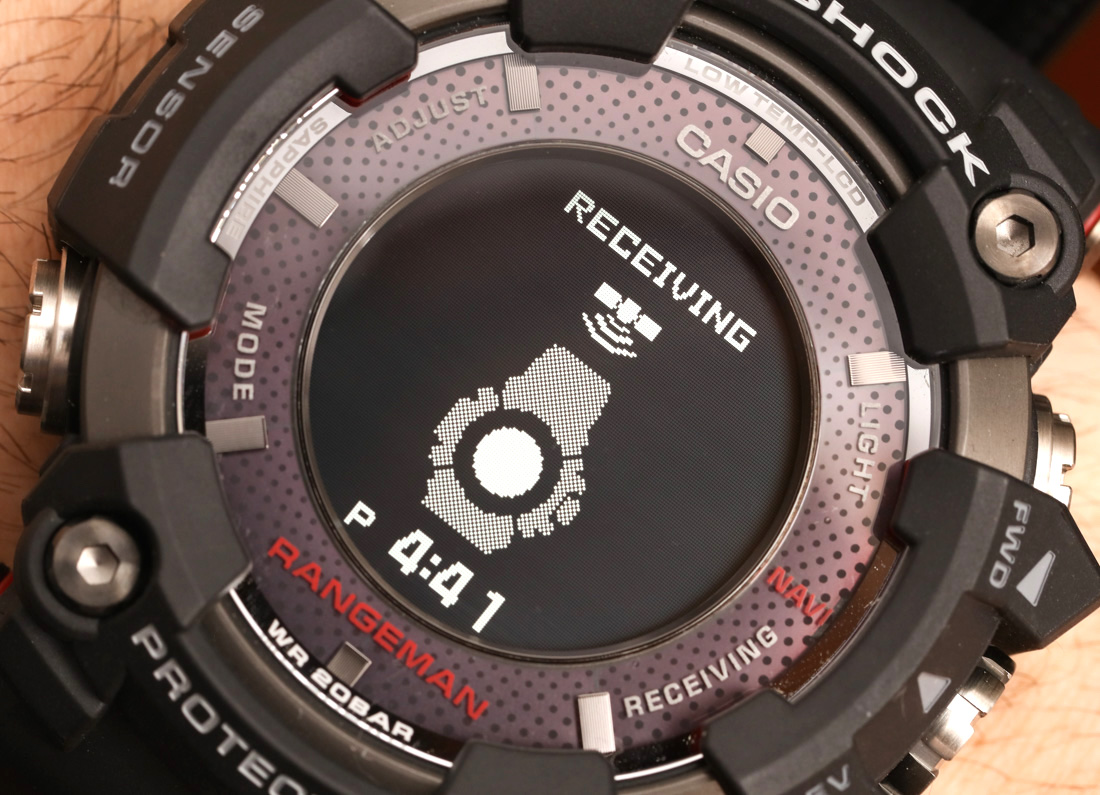 The new “module” inside the watch is the in-house made Casio 3452, which is a technical beast to say the least given everything that it does. Note that this watch can charge the battery in two ways. One is using solar power generation and the second method is a charging cradle which helps get the watch’s power back to full if you need to charge it up for GPS functionality. This isn’t the first GPS watch from Casio, but it does combine GPS, Bluetooth, and some other sensors together in a system that is no doubt quite power hungry. One of the new features on the dial is a battery power indicator, which helps you know how much juice is left in the watch. For the most part I think you can get away with having the watch powered using the solar/light photovoltaic cell only. But if you get into using the GPS functionality a lot, then the charging cradle will be invaluable to you.