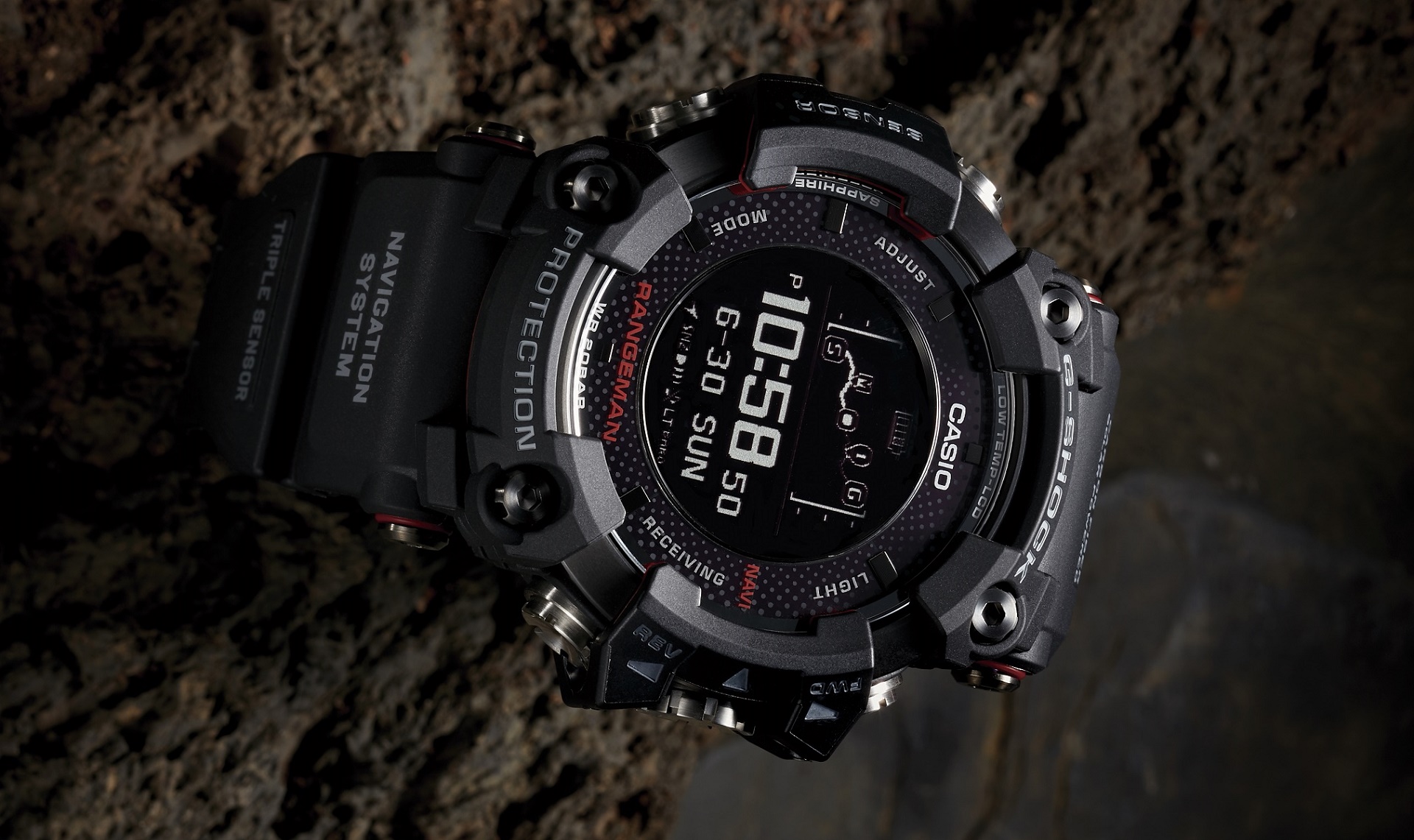 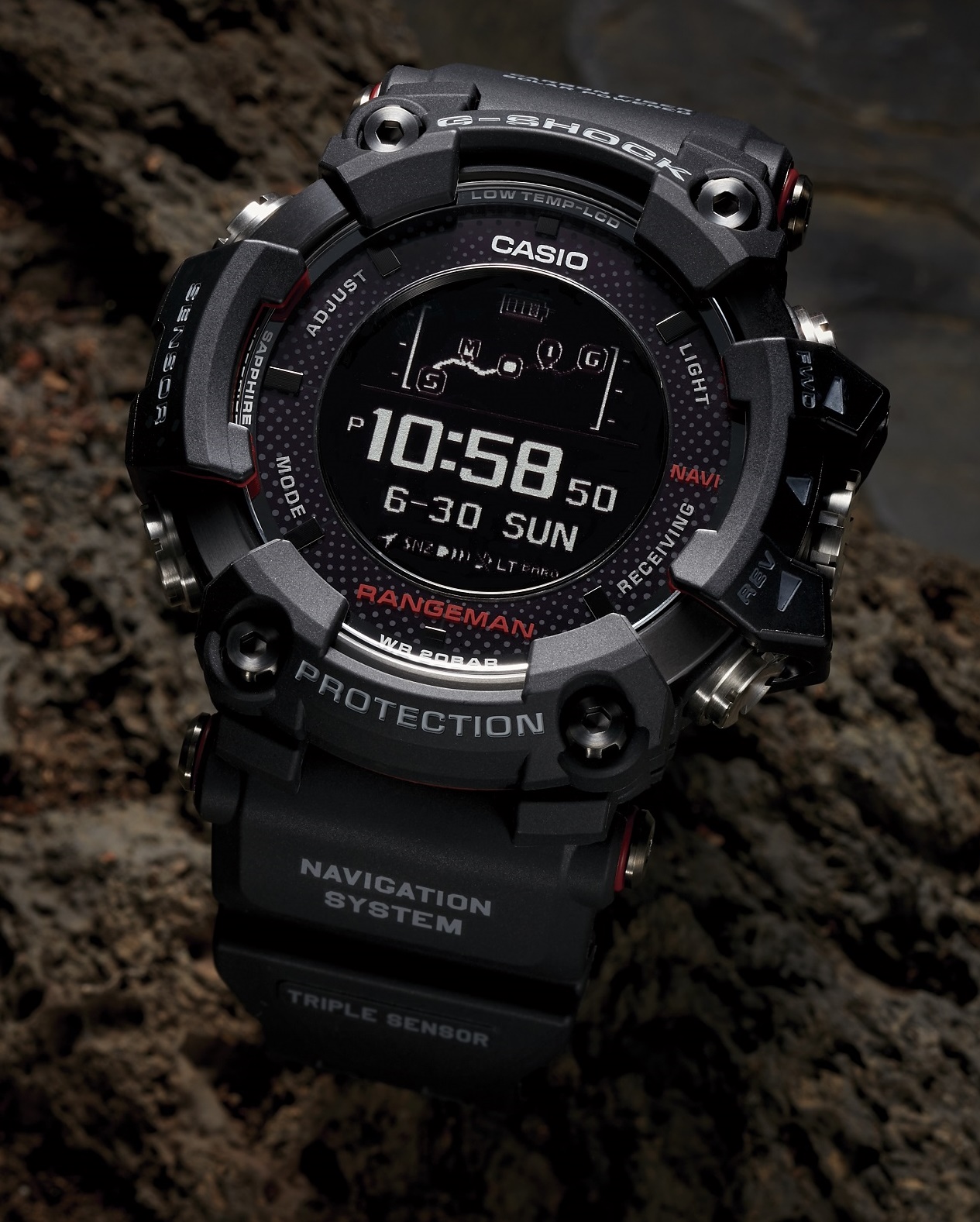 For tech lovers like me, Casio just released what may be its most exciting modern G-Shock watch yet at CES 2018 with the G-Shock Rangeman GPR-B1000 (GPRB1000-1 in black and GPRB1000-1B in olive green). They also refer to the watch as the “G-Shock Rangeman GPS Navi.” Continuing their (wise) iterative approach to product development, Casio is actually offering some compelling new features in the 2018 G-Shock Rangeman which we haven’t seen yet. This watch is ideal for G-Shock traditionalists who also want the benefit of “optional” modern features and conveniences such as GPS and Bluetooth connectivity. With that said, the Rangeman GPR-B1000 will still operate very nicely without connecting it to anything.

Let’s first understand how the GPR-B1000 fits into the larger G-Shock as well as Rangeman sub-model universe. Casio originally released the Rangeman 4-5 years ago and aBlogtoWatch reviewed the popular G-Shock timepiece model here. At the time I considered it to be the best G-Shock on the market to date. One of the primary reasons people loved the GW9400 Rangeman (aside from its attractive design) was its incorporation of Casio’s full range of “triple sensor” features including a compass, barometer, and altimeter (as well as thermometer). For 2018 the GPR-B1000 carries the Rangeman name, but is in reality an entirely new model that, while having a similar appeal as the original Rangeman, is an entirely new G-Shock model collection. The good news is that I think it has the ability to capture our hearts and wrists in the same way that the GW9400 Rangeman models did. With that said, the GPR-B1000 will have a retail price of more than double most versions of the outgoing Rangeman products. I do however think that Casio has offered plenty of good reasons to justify the price.

To fully understand the nuances of the G-Shock Rangeman I will have to wait until I can offer a hands-on review. Right now we have just a single image from Casio – with the promise of more to come. With that said, we know enough to be excited about the latest “do anything” G-Shock from our friends in Japan. One other important thing to note is that the Rangeman is now part of the more high-end Master Of G collection. In general this means a few things that consumers should be aware. Most important is that it means Casio will be giving the GPR-B1000 watches superior materials and construction quality. Related to that is the fact that Master Of G watches are produced by Casio in Japan – which is a treatment only its top-end products receive. 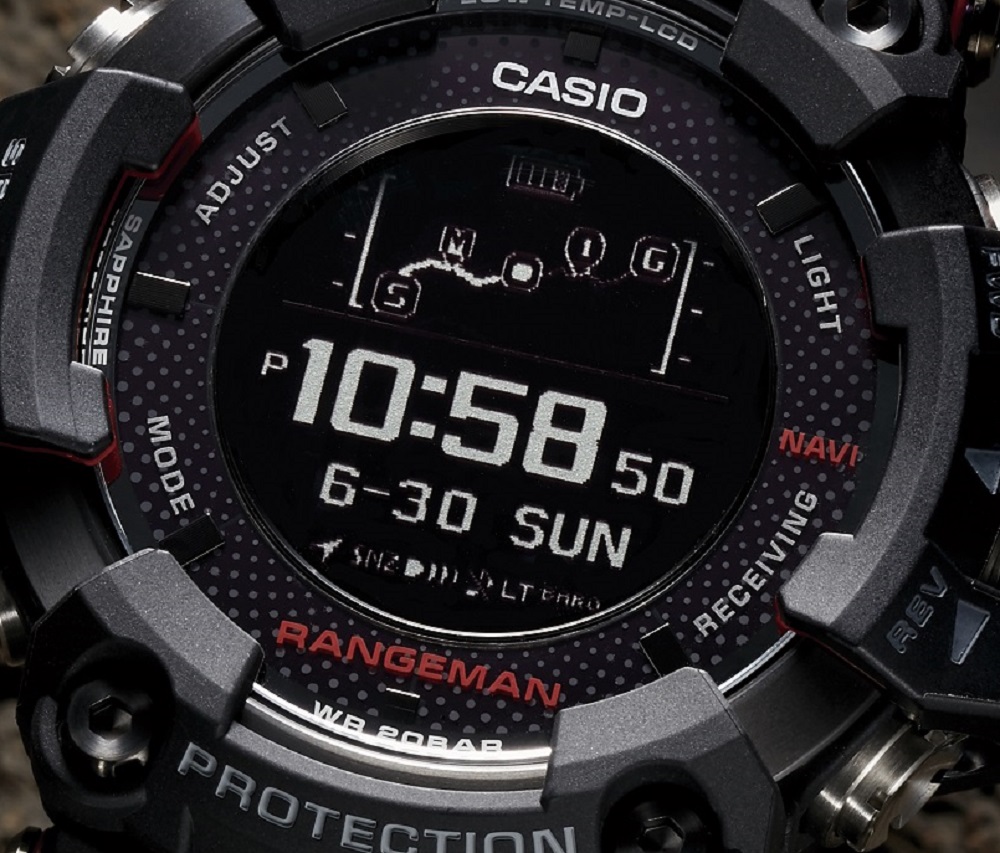 For example, this is the first G-Shock watch with a ceramic (versus steel) caseback (that is 2mm thick). Ceramic is used because it allows signals to pass through it that metal would block. This includes both antenna signals for the watch’s communication functions, as well as for wireless charging. The watch also makes use of a sapphire crystal – which I believe is a first for any of the Rangeman collection watches. At this time Casio hasn’t mentioned to us the size of the GPR-B1000 case, but it will be water resistant to 200 meters. Given the inclusion of the GPS antenna module and other features this will not be small-sized G-Shock timepiece, but no one is better than Casio at making large-sized watches comfortable to wear on the wrist.

Casio boasts that the G-Shock Rangeman GPR-B1000 is the world’s first “solar-assisted GPS” watch. What does that mean? Basically, while this and most other G-Shock watches have the ability to charge the internal battery using light (turned into electricity via a photovoltaic cell ring around the dial), communication features such as GPS and Bluetooth (namely GPS in this situation) require too much energy for light power generation alone. Thus, the GPR-B1000 uses both solar power generation and a wirelessly-rechargeable internal battery for power consumption needs.

The “solar-assisted GPS” part of the watch means that if the internal battery power reserved for the GPS runs out, you can leave the watch out in bright sunlight for a while to get more juice to use it. For example, Casio says that the watch can use GPS for 33 hours after five hours of the watch being charged in bright sunlight. Casio has promised that time-telling and other essential parts of the watch will be able to strictly rely on the light-generated power, which means users don’t need to manually charge the watch on a regular basis unless they are using the GPS functionality all the time. I think that is a good use of both technologies to enhance the user experience and give the watch the most utility in the broadest range of wearing scenarios.

How does the new Rangeman watch use GPS exactly? One basic (but important) reason is to update the watch’s time and location, but more important for this watch are the navigation features. Users can manually establish waypoints, and the watch will track your location and route in real time. One of the most important real-world uses for this functionality is offering users the ability to effectively backtrack their trail to prevent them from getting lost when returning to where they started. Most of the GPS map displaying features are likely available in the companion smartphone app.

While the design of the GPR-B1000 case borrows from the classic Rangeman, it is more or less new. The most obvious new element is the higher resolution monochromatic LCD display – which I hope will offer enhanced legibility than other “negative LCD” displays produced by Casio which have a black versus light colored background color (it of course has a powerful backlight feature as well). The more complicated display should be good for the user because it means that Casio is able to offer more varied information for each screen, while also giving a distinctive look to each of the modes.

Carried over from the original Rangeman are the “ABC” set of functions (altimeter, barometer, compass), as well as Bluetooth and GPS functionality. Also included are tide chart data as well as a moonphase indicator. While I am not 100% sure, I also believe the watch will have sunrise/sunset time data. The companion mobile phone (G-Shock Connected) was debuted last year and offers a lot of useful functionality even for those who aren’t going to be using the GPS tracking features on a regular basis. 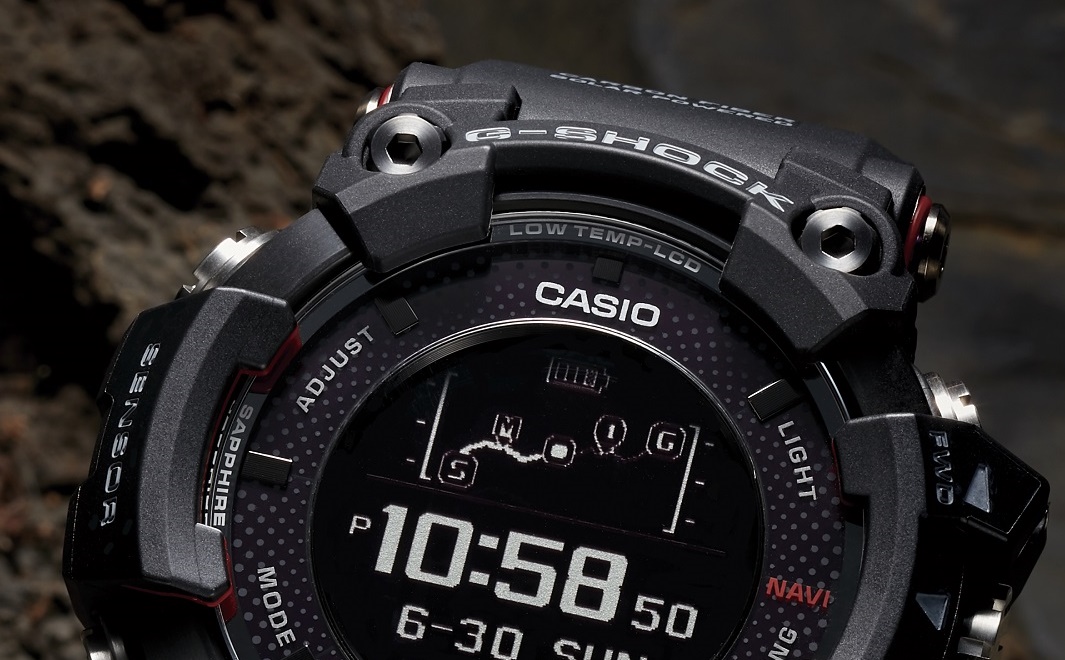 While I find Casio’s all-analog G-Shock models to be attractive, they never have as much utility or legibility as a purely digital watch. Last year in 2017 I reviewed the excellent Casio G-Shock Gravitymaster GPW-2000 watch here. That was the first time I experienced a non-smartwatch Casio with Bluetooth, GPS, and the G-Shock Connected mobile phone application. For me, the GPR-B1000 is the digital companion to the analog Gravitymaster. With the more versatile screen and rechargeable battery (in addition to solar power) the new Rangeman is set to be an even more full-featured watch (even though both are similarly priced). For some people the Rangeman will not have the sex appeal of a purely analog watch, but it will offer more functionality – namely in its ability or offer a slew of realtime data on the dial, as well as featuring a lot more sensors and functions.

I do recommend using the G-Shock Connected app with this watch if only to make it easy to set the time and adjust various functions such as the alarm, or world time modes. It just adds a layer of convenience which I find helpful and not annoying (as can be the situation with some other watches and their companion apps). I agree with Casio that the GPR-B1000 Rangeman isn’t trying to be a smartwatch, but rather a logical extension of how the G-Shock collection should continue to evolve to play-well in today’s ecosystem of consumer products. This is thus a hybrid-style watch that exists between Casio’s totally unconnected watches, and its full-fledged smartwatches such as the Casio Pro Trek WSD-F20 (aBlogtoWatch review here). For me this is a great type of product because I like the autonomy of traditional G-Shock watches, but also feel that Casio is excellent at coming up with effective ways to incorporate connected technologies features when they put their mind to it.

As a G-Shock family member, Casio is quick to point out that the G-Shock Rangeman GPR-B1000 family is super durable, and we have no doubt that it is. In addition to being very shock resistant the watch is designed to operate normally from negative 20 degrees Celsius, all the way up to… well when parts start to melt. In addition to the durability of a sapphire crystal over the screen, Casio makes use of its clever and very effective carbon rod technology which very securely attaches the straps to the case. Casio (in their charmingly unnecessary way) hints to these various features and design elements with labels all over the watch case and face.

Depending on the popularity of the G-Shock Rangeman GPS Navi GPRB1000-1 (black) and GPRB1000-1B (olive green – we don’t have images of all the versions at this time) Casio will likely offer even more color versions and continue to update the Rangeman in the future as its premier “land exploration” G-Shock model. This means it is arguably replacing the Pro Trek for this purpose. Though I’ve guessed in the past that Pro Trek will be the collection Casio decided to position is full-smartwatch exploration watches in. I say thank you again to Casio for presenting the consumer with so many (nuanced) options. I look forward to checking out the Casio G-Shock Rangeman GPR-B1000 watches myself. Available starting in April 2018, the retail price will be $800 USD. gshock.com