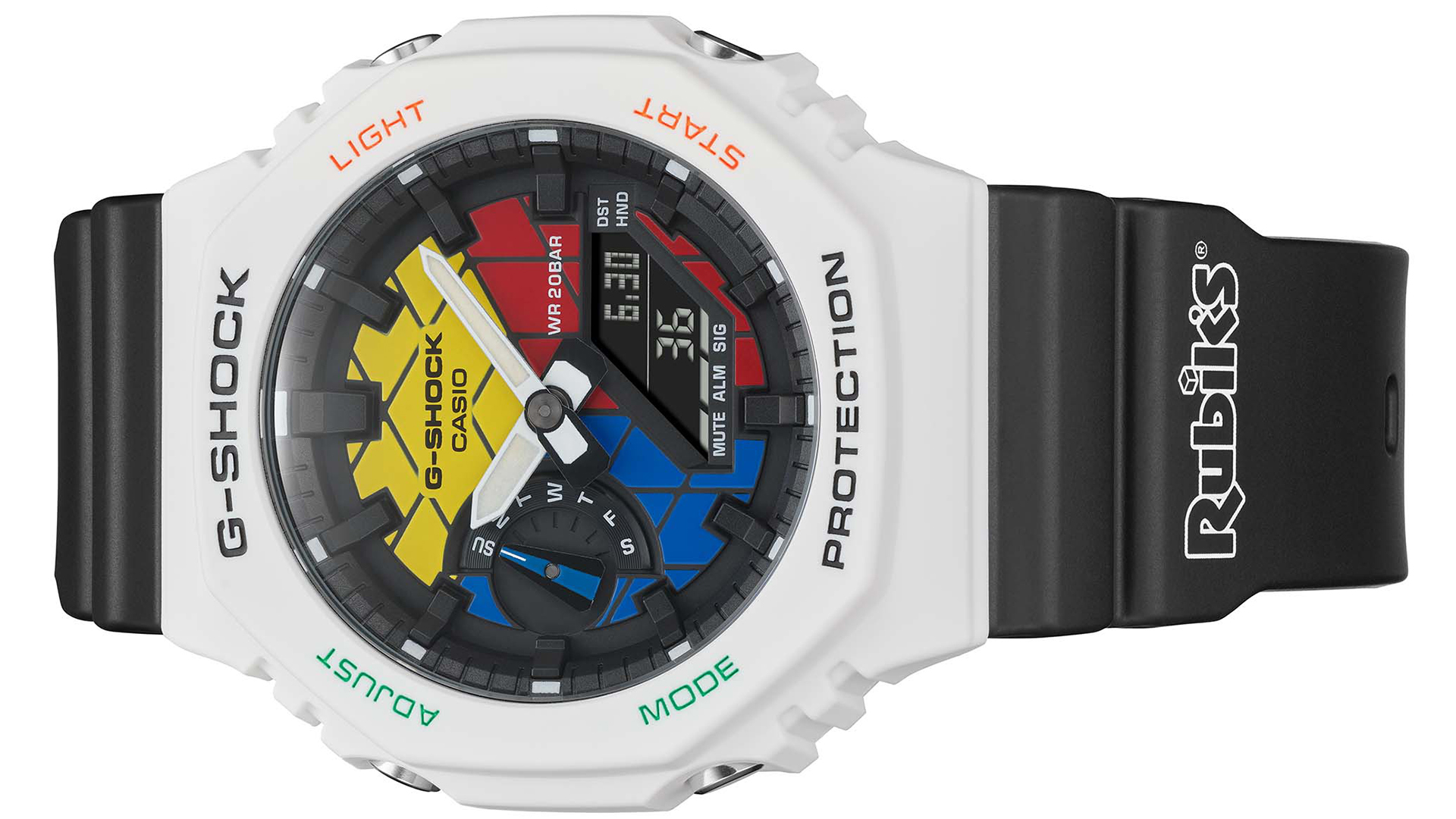 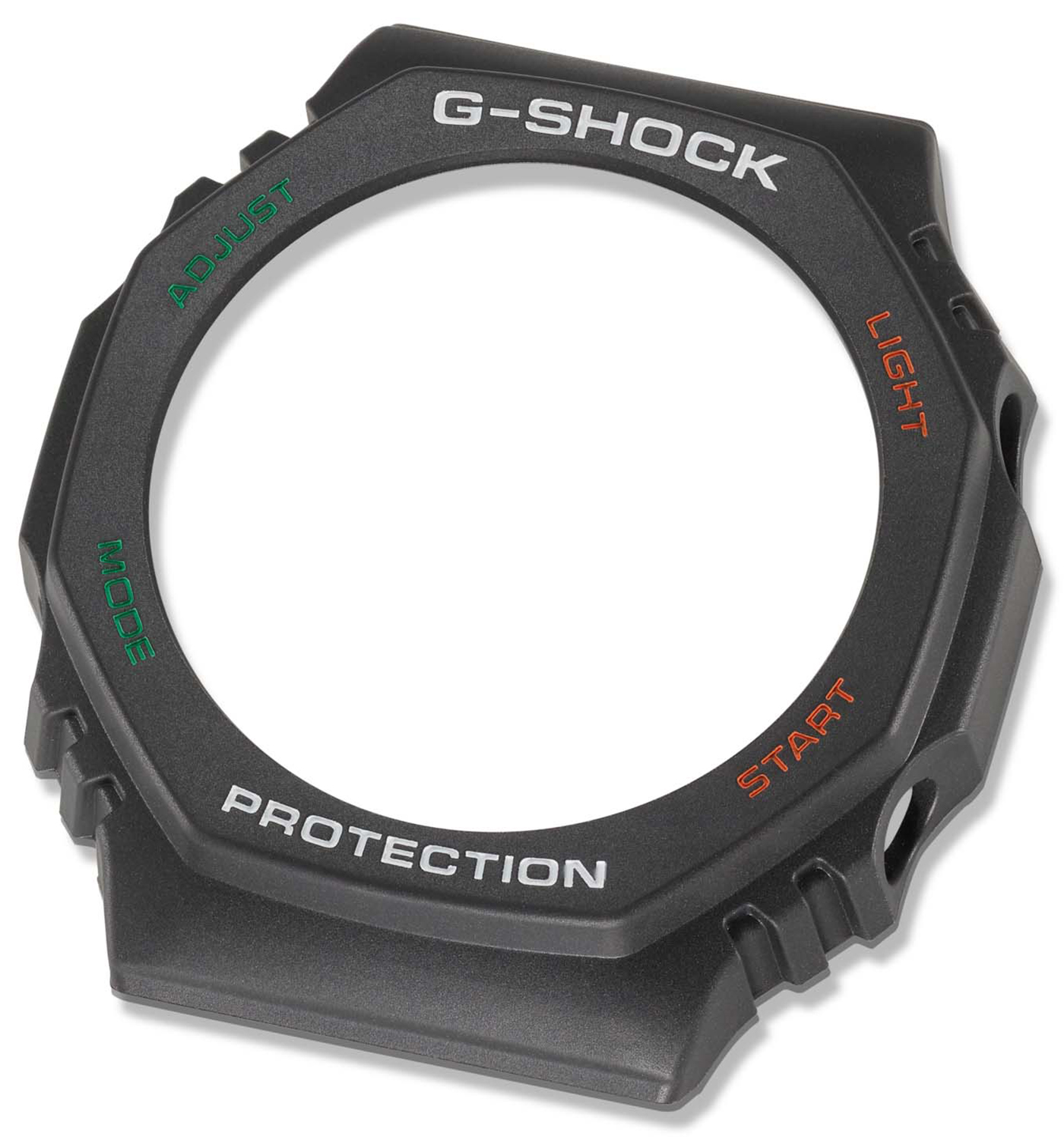 Over 40 years on from its debut in 1980, the colorful and challenging Rubik’s Cube continues to delight fans around the globe as an icon of ‘80s pop culture and the bestselling puzzle game of all time. The rugged Casio G-Shock series is another pop culture touchstone with roots in the ‘80s, and for its latest release Casio combines the vibrant color blocks and changeability of the Rubik’s Cube with one of the G-Shock line’s fan-favorite silhouettes. The resulting limited edition Casio G-Shock GAE2100RC-1A is vibrant and playful, with a bold graphic dial treatment coupled to an interchangeable set of durable resin bezels. 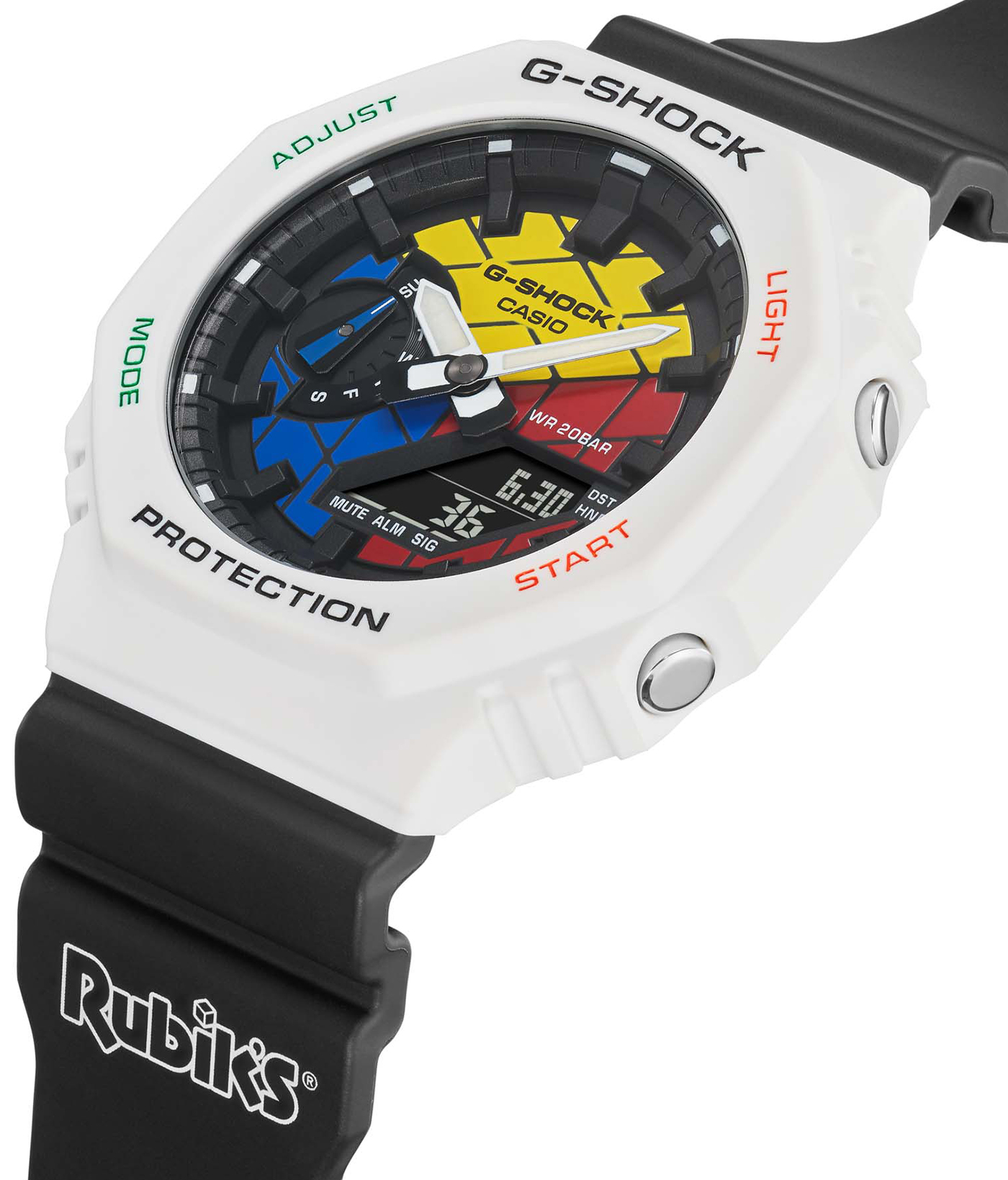 The 45.4mm resin case of the Casio G-Shock GAE2100RC-1A is shared with the rest of the GA2100 series, with its bold octagonal form and relatively streamlined case geometry. Unlike other entries in the wildly popular “Casioak” family, however, the GAE2100RC-1A is designed to allow wearers to change case colors on the fly. Both matte white and matte black resin bezels (Casio uses the term bezel to describe the entire resin portion of its cases, rather than only the raised area surrounding the dial) are included along with a changing tool, which gives the design an intriguing split personality. Without a doubt, the matte black bezel is the more traditional of the two options, with a more reserved character that allows the colors of the dial and engraved text to shine through. By contrast, the matte white bezel gives this familiar silhouette a playful new high-impact look in images, although it must be mentioned that the brightness of this finish tends to hide many of the case’s facets and contours. Both the black and white bezel options use vibrant green and orange fills for their bezel text, in homage to the colors of the original Rubik’s Cube. The GAE2100RC-1A also sports Casio’s Carbon Core Guard case structure for added durability, a relative rarity at this more affordable end of the G-Shock spectrum. Like the rest of the G-Shock line, however, the GAE2100 offers a hefty 200 meters of water resistance. 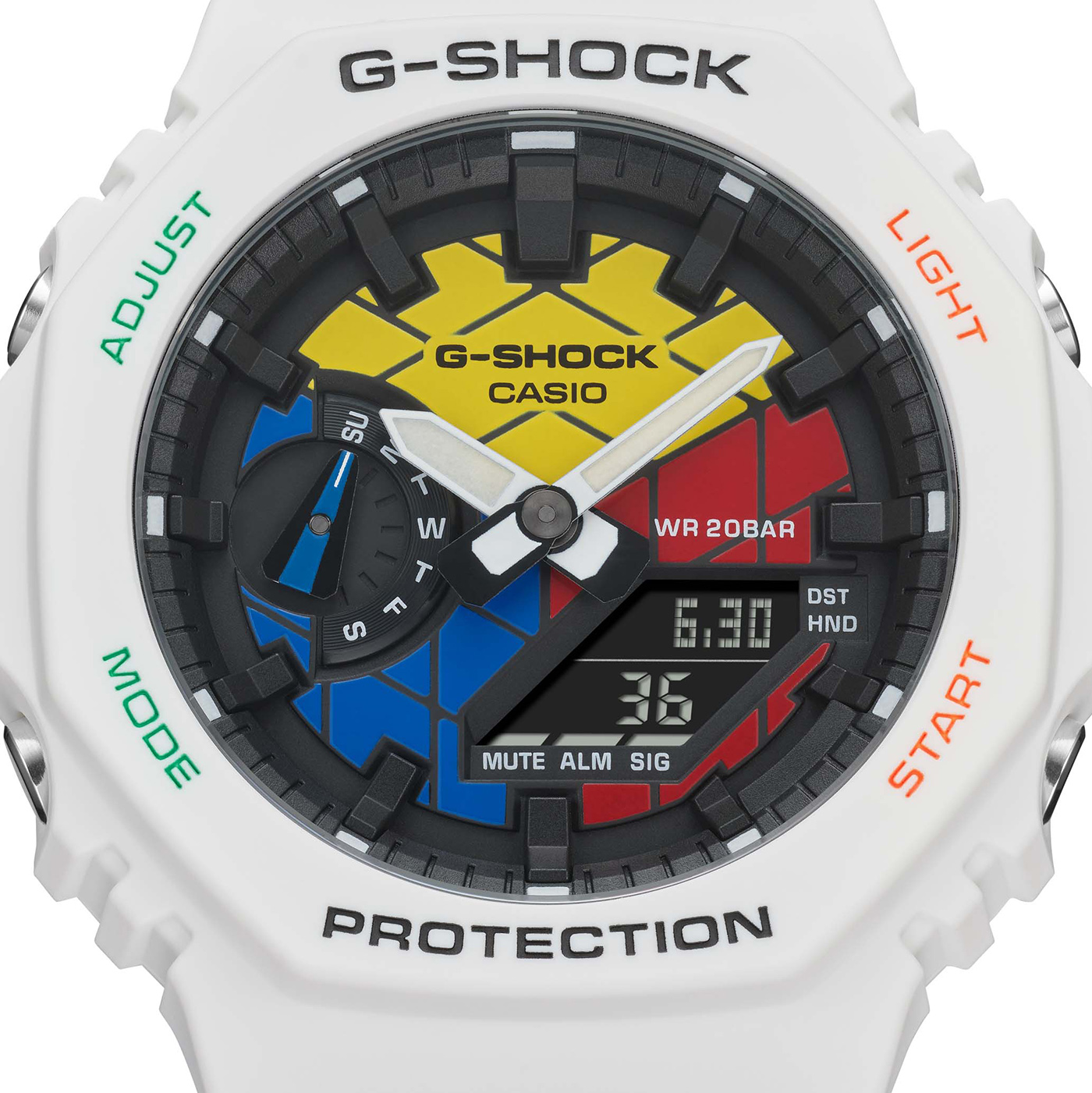 Although the layout is shared with the rest of the GA2100 family, the Casio G-Shock GAE2100RC-1A’s dial takes on a lighter character through its use of color and texture. The main dial surface uses a pseudo-3D grid pattern to emulate the look of the classic Rubik’s Cube, with three equal segments in bright toylike yellow, blue, and red. There’s a real sense of depth that shines through in images, heightened by thoughtful touches like a matching blue-striped hand for the retrograde day subdial at 9 o’clock. The broad sword hands, beefy bent indices, and familiar 5 o’clock digital subdial all use a simple black and white color scheme to avoid becoming too visually chaotic while tying in handsomely with the base model GA2100. 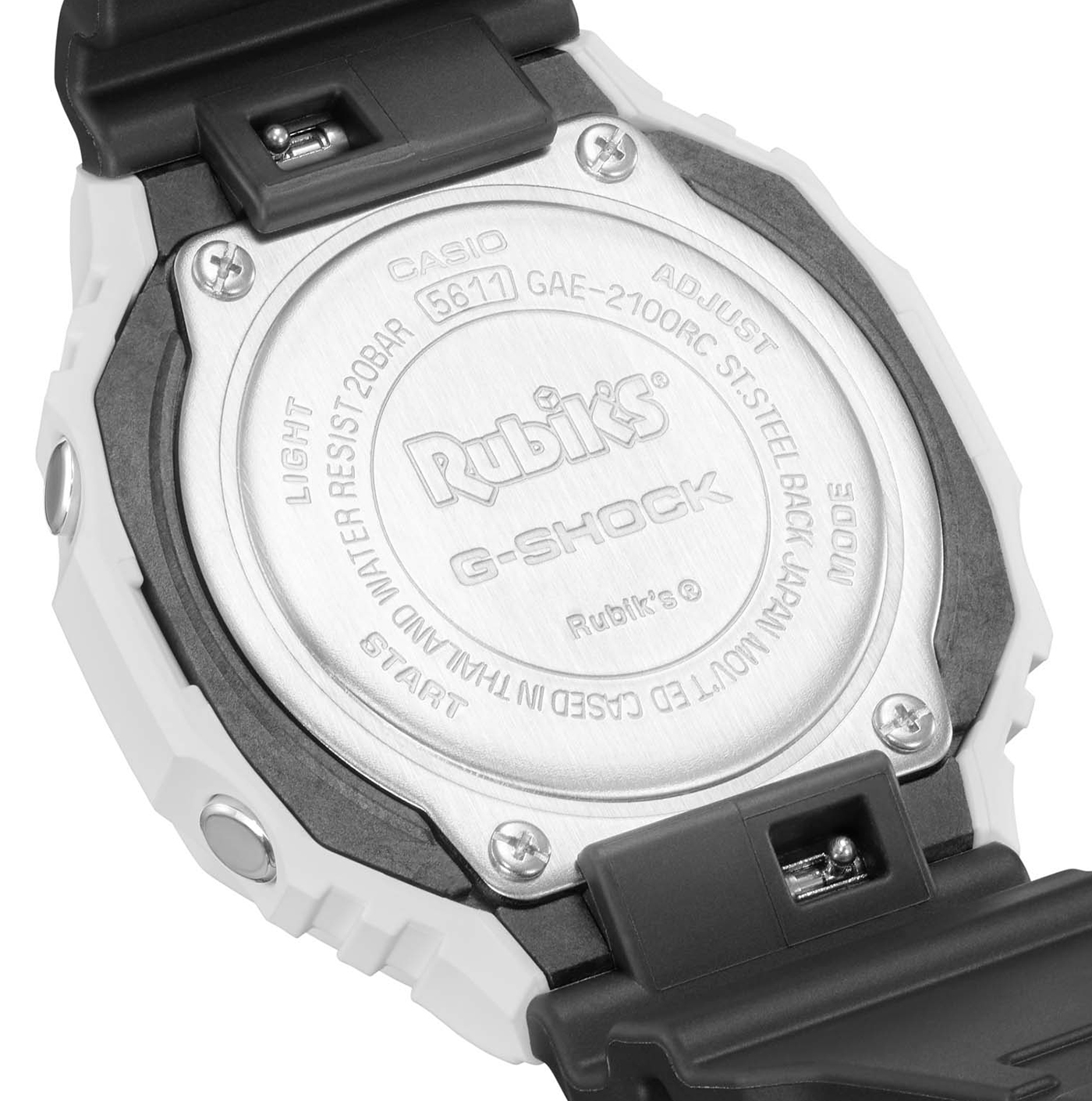 Casio powers the G-Shock GAE2100RC-1A with its in-house Module 5611 ana-digi quartz movement. In addition to the G-Shock line’s trademark massive shock resistance, the Module 5611 also carries a suitably hefty list of complications, including a 1/100 second split-seconds chronograph, a world timer, a perpetual calendar, an hourly time signal, five programmable daily alarms, and LED dial illumination. Casio pairs the G-Shock GAE2100RC-1A with its tapering accordion-style resin strap but adds to this familiar design with a printed Rubik’s logo along with a bright, toylike buckle and keeper in Rubik’s Cube-esque orange and green. 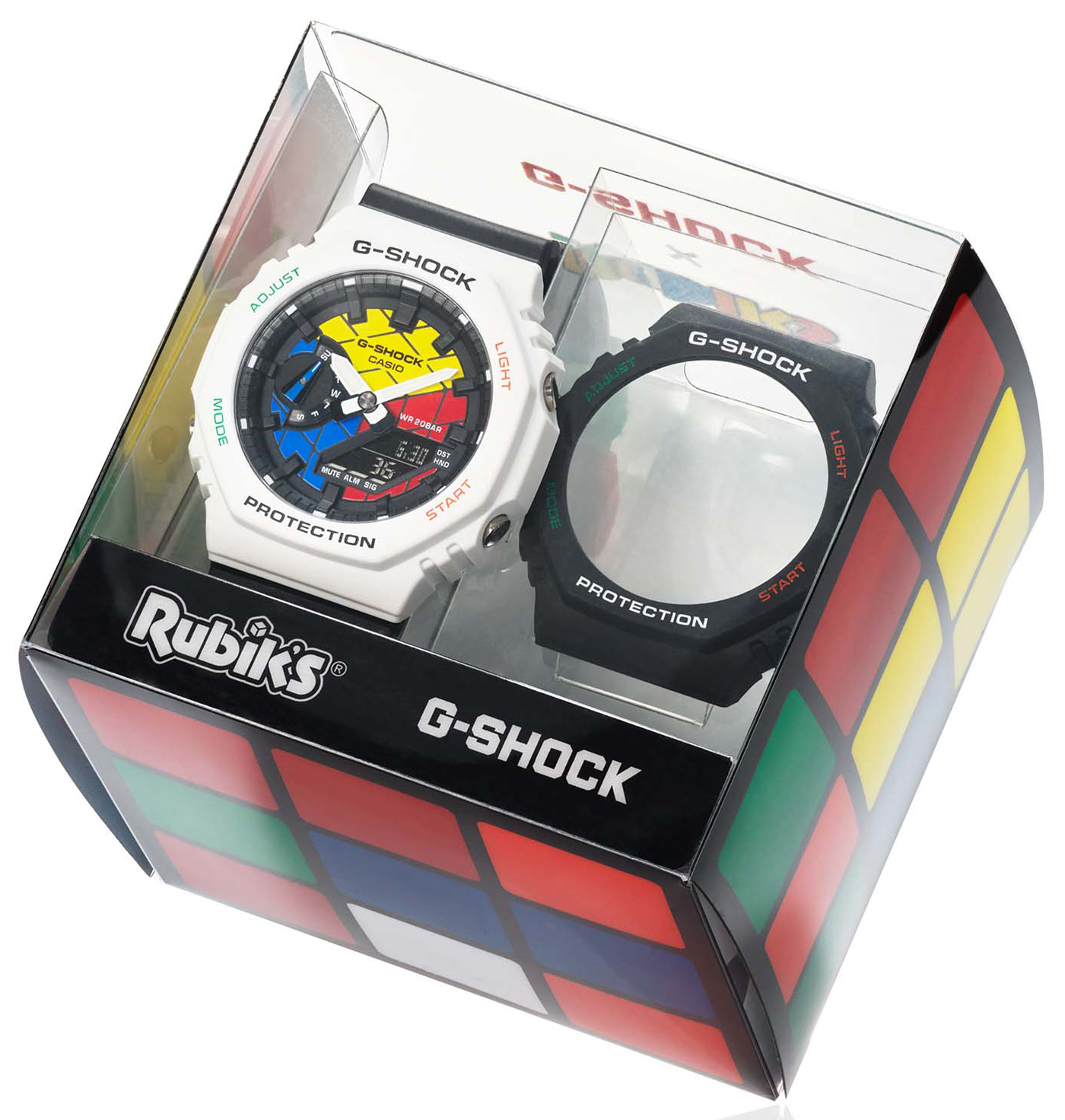