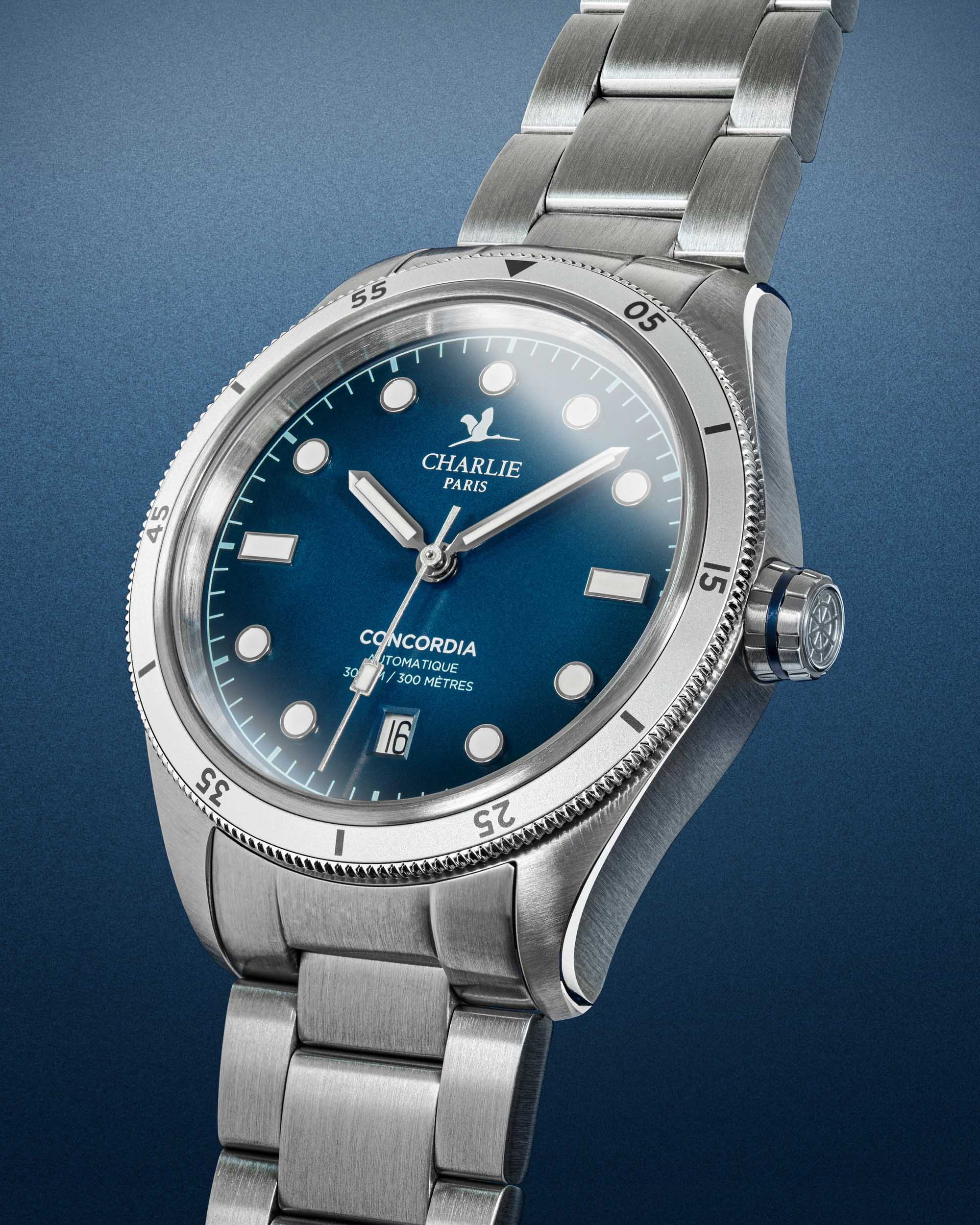 Established by two childhood friends and now sporting a team of 12, Charlie Paris is a value-driven, fully independent watch brand. Proud of its French roots and operations, the company has debuted its flagship watch: the Charlie Paris Concordia Nazaré, designed and assembled in France. Named after the Portuguese town on the Silver Coast, the Nazaré accompanied professional windsurfer Thomas Traversa during an epic ride on the back of the biggest waves in Europe. 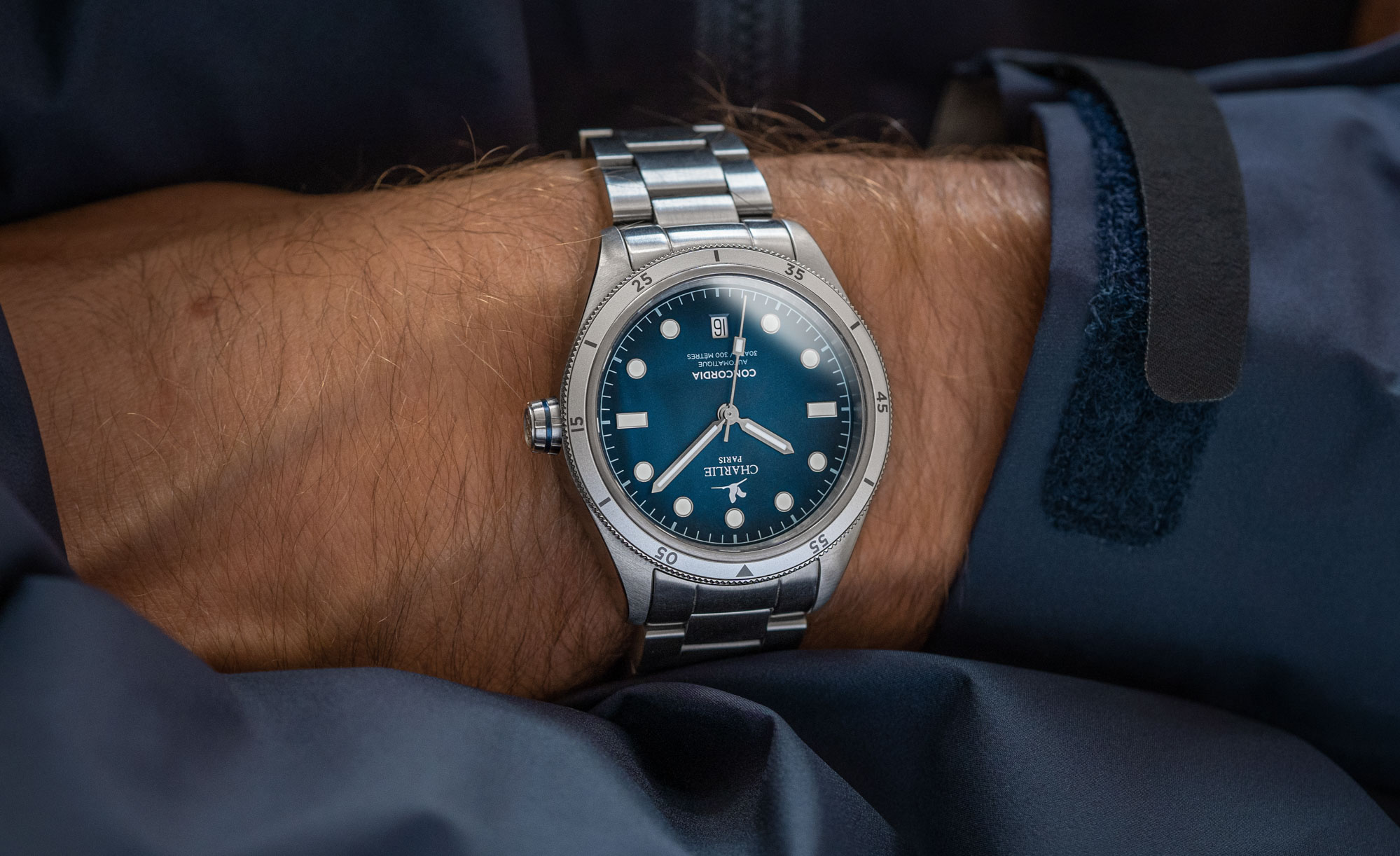 Ambroise and Adrien launched Charlie Paris in 2014 with the desire to serve as an alternative to luxury watches they had been dreaming of but could not afford. Their mantra? Le plus beau reste l’avenir — the best is yet to come. With a beautiful store a stone’s throw from Pont des Arts, the Paris-based team operates an independent company that is able to act according to its will — listing freedom, kindness, quality, and sobriety as its core values and driving forces. Benevolence, honesty, and respect allow Charlie Paris to establish trusting relationships in the long term with its customers, partners, collaborators, and the entire ecosystem around it. 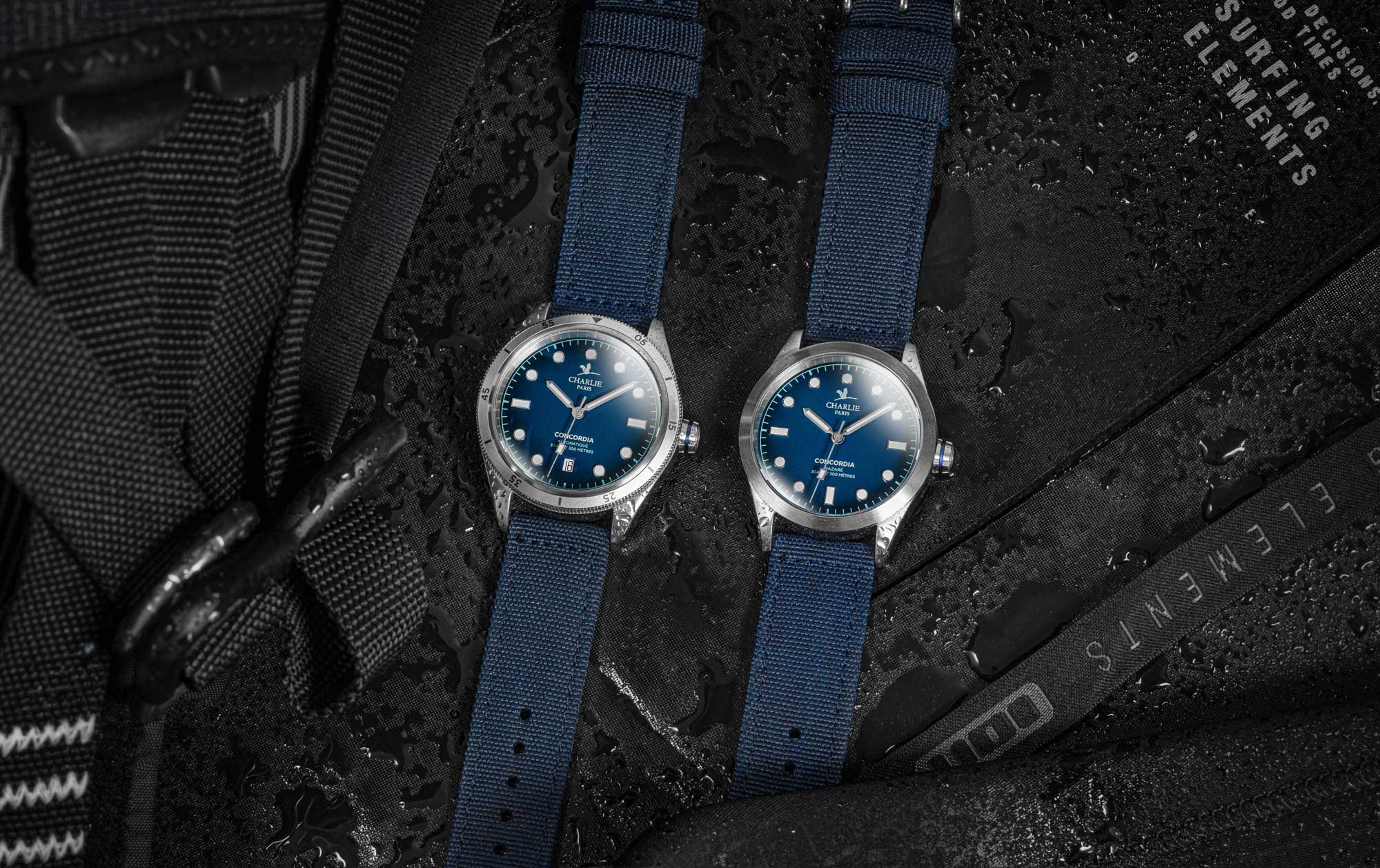 Appreciative of the uniquely rich watchmaking traditions of France, Charlie Paris wishes to maintain this formidable heritage by combining both traditional and modern styles. The sincerity and authenticity of its approach are illustrated by the directness of its creations, wherein each element has its importance, and the superfluous has no place — less is more in this context. Through its commitments, Charlie Paris wants to be the ambassador of the French art of living, in which a watch is qualified not only as an instrument of measurement but also as an object with strong symbolic value. 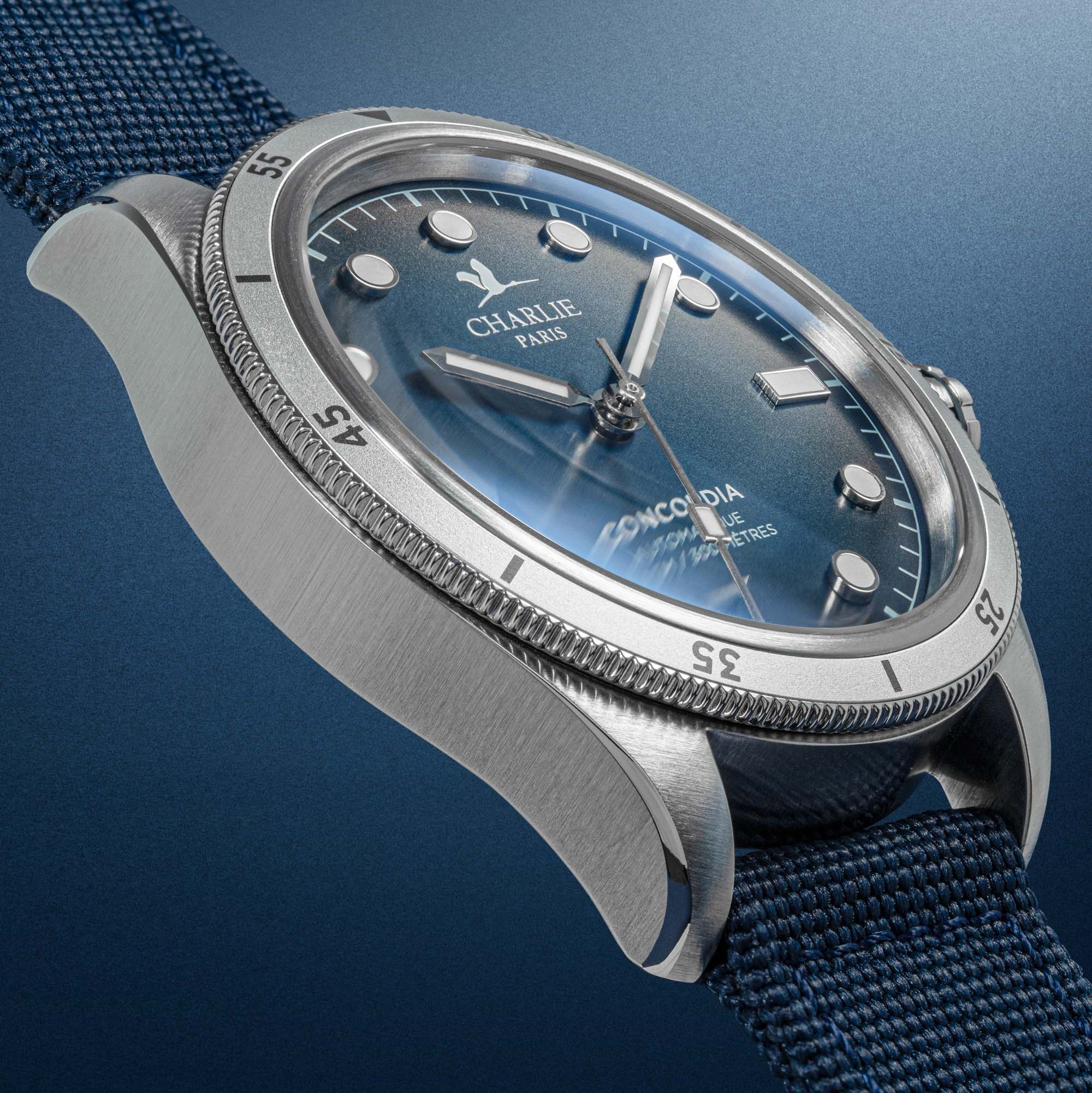 The Charlie Paris Automatic Nazaré is perfectly aligned with all of the above. With a precisely calculated blend of modern and traditional horological design cues, it combines a robust, yet refined exterior with a sharp-looking dial. The 316L stainless steel case measures 40mm-wide and 12.7mm-thick, and the distance from lug to lug is 47.5mm. Boasting an ISO764 antimagnetic shielding, the exterior is brushed to minimize dazzling reflections, with polished surfaces decorating the bevels that run along the case profile, as well as the coin edge of the unidirectional bezel. 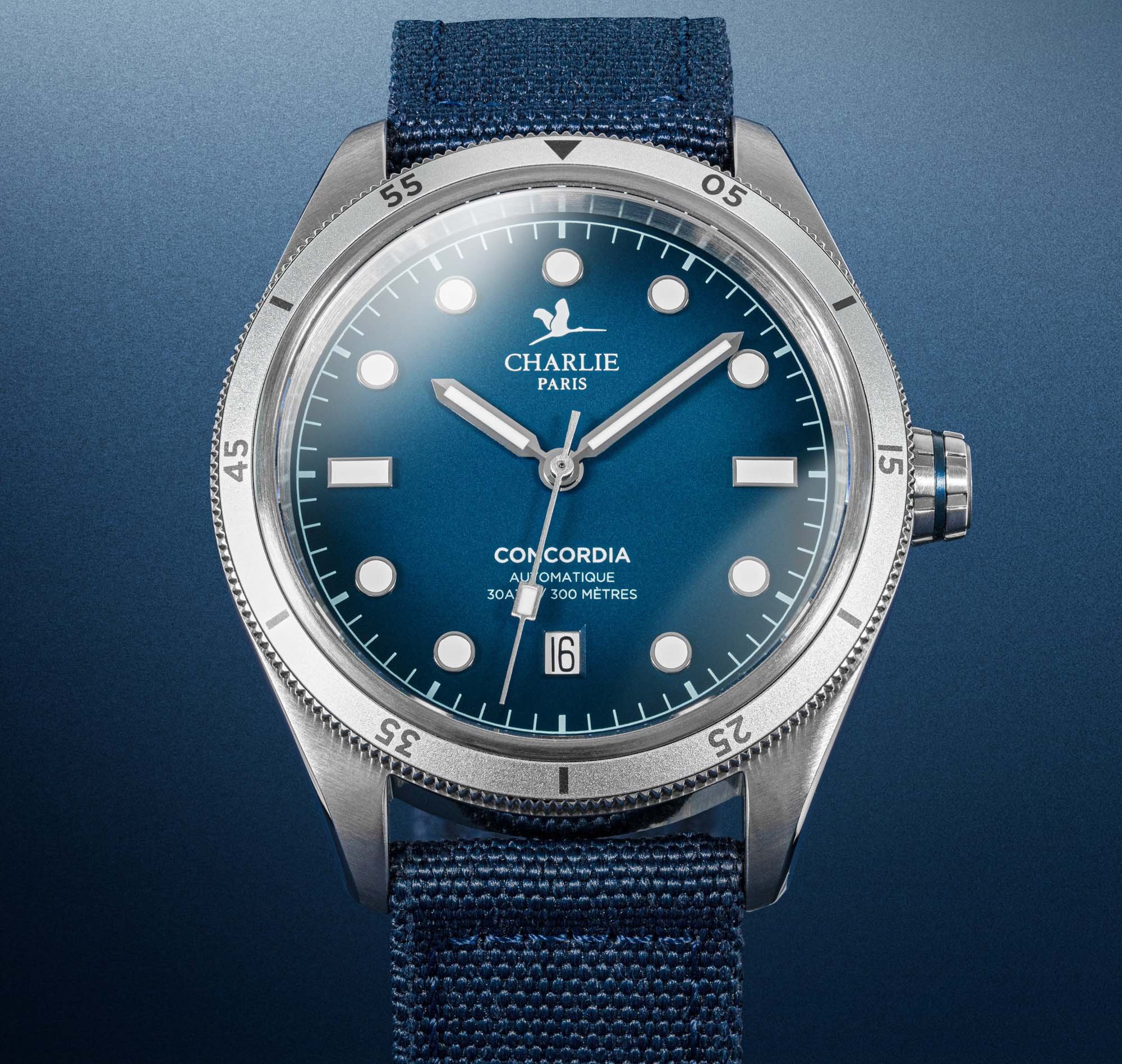 A 60-minute timing bezel with an aluminum insert works in tandem with the Super-LumiNova-treated hands — the large applied hour markers follow suit, displaying strong luminosity to enhance low-light legibility. Protected by a domed sapphire crystal front, the dial’s surface has been lightly sandblasted for a spectacular, but also highly functional, effect. 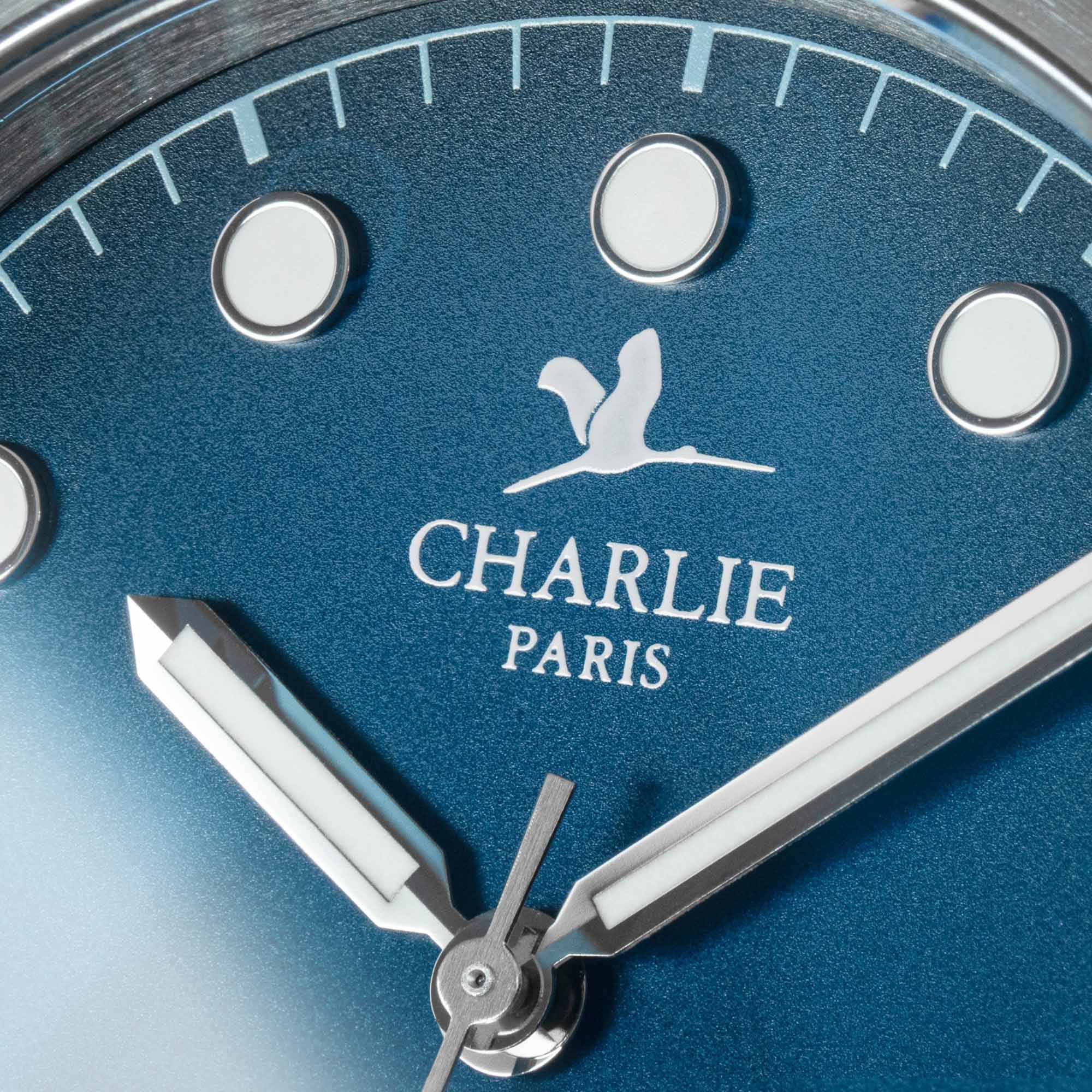 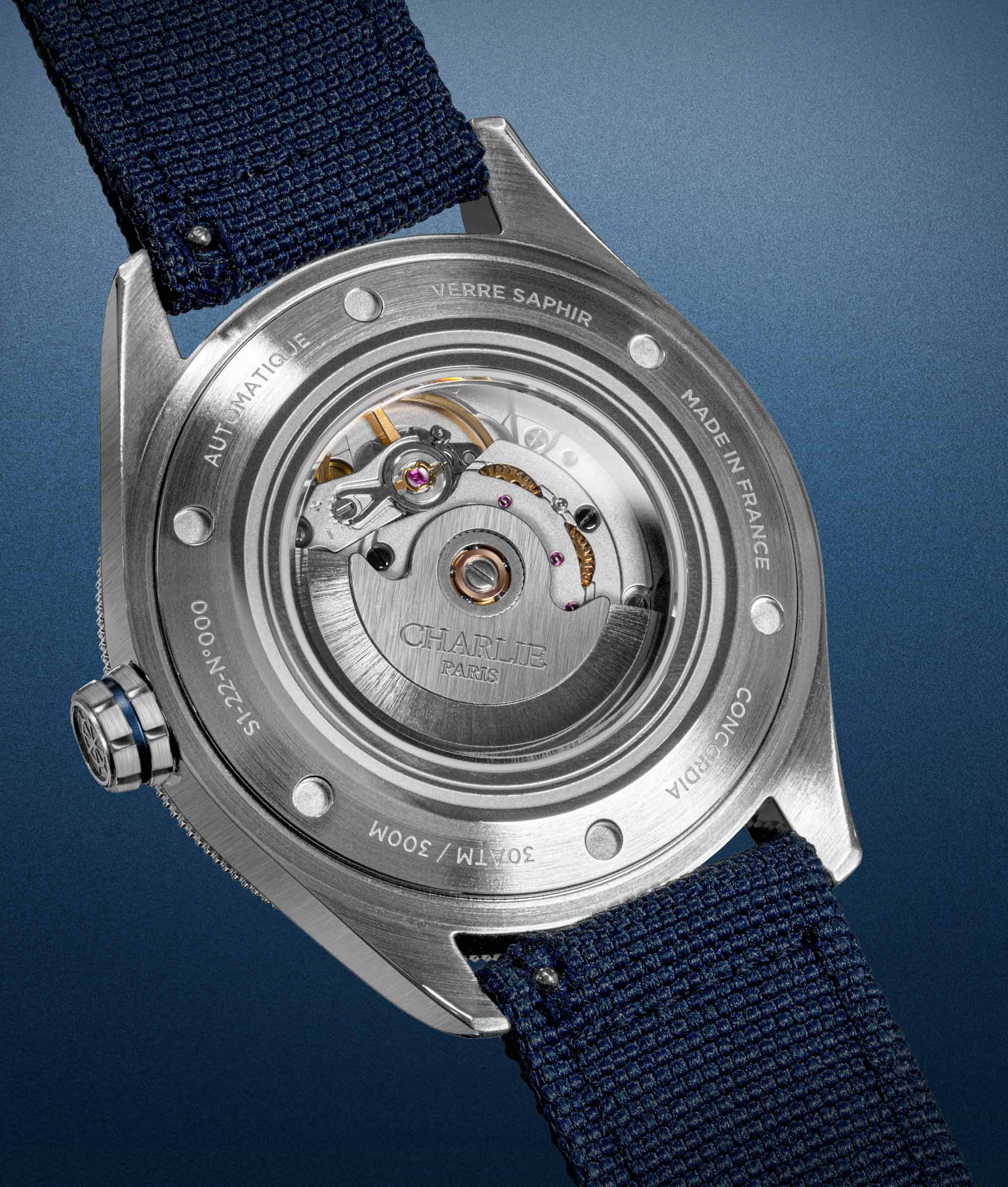 With a screw-down crown and a sapphire crystal caseback, the Charlie Paris Concordia Automatic Nazaré has a water resistance rating of 300 meters, fully preparing it to accompany a new generation of urban adventurers in all circumstances. This is all to protect the Soprod P024 movement, a caliber that complies with the Swiss Made requirements but, interestingly, has its bridges and plates machined in France — making it all the more the ideal choice for Charlie Paris. It is just 4.6mm-thick, even with a full-size self-winding rotor, and operates at a modern 4Hz frequency through a power reserve of 38 hours.

Worn by Winter storm hunter, a world reference for windsurfing in big waves, and equipped with his Concordia, Frenchman Thomas Traversa surfed on the ultimate spot of Nazaré where the most enormous waves of Europe are formed. His Concordia passed this test with flying colors, thanks to its robust exterior and careful assembly by professional and experienced watchmakers in France. The Concordia Nazaré is available in two versions: a 40mm-wide variant with a self-winding movement and a date display at 6 o’clock, and a 38mm-wide alternative with a Seiko VH31 sweep-seconds quartz movement, without a date aperture.