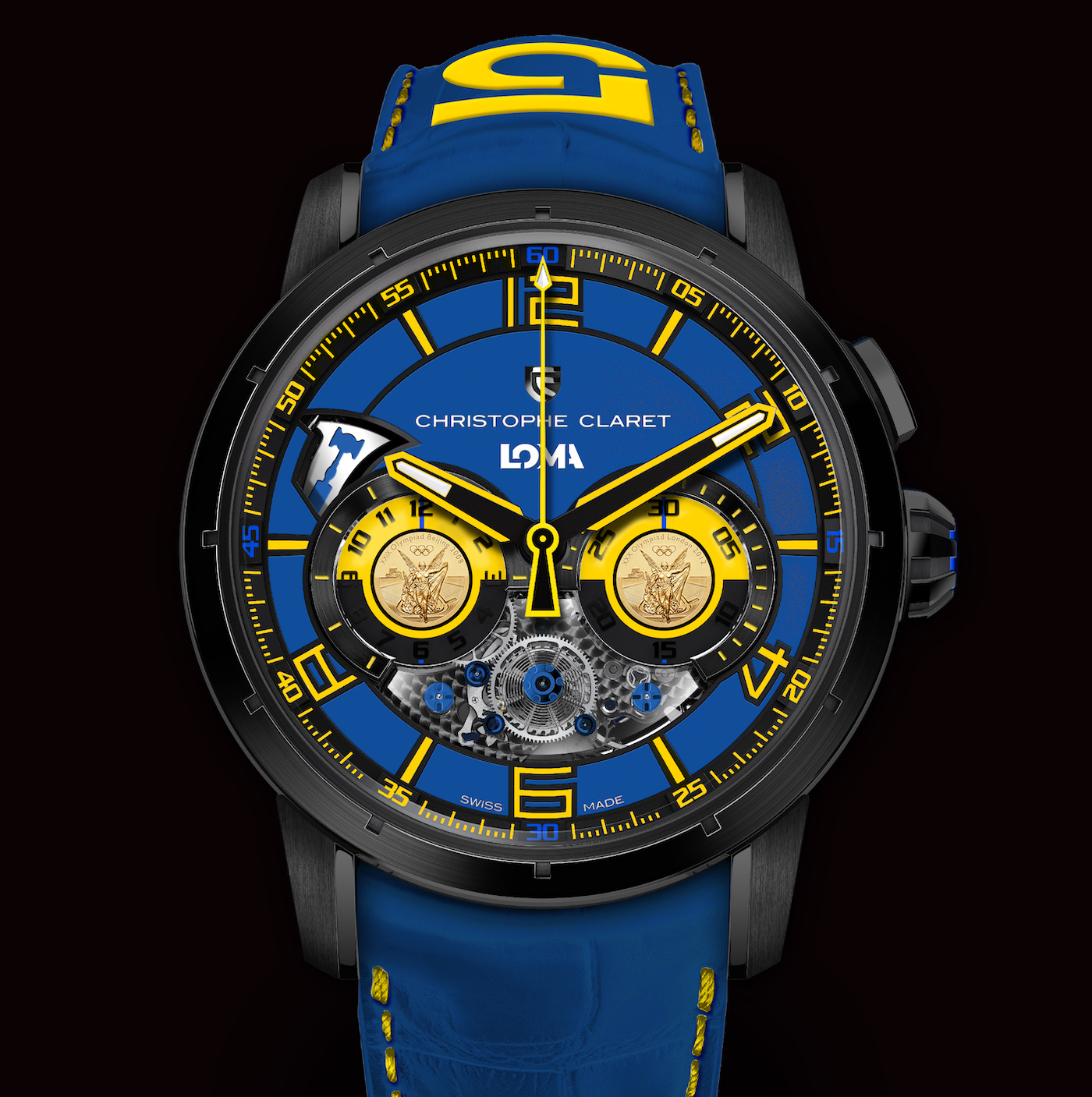 On Monday, May 20th, 2019, esteemed Swiss watchmaker Christophe Claret made official its partnership with Ukrainian boxer Vasyl Lomachenko, with the release of the Christophe Claret Loma watch. The setting was the south of France, while the 72nd edition of the Cannes Film Festival took place just yards away. Cannes is a luxurious enough location as it is, but the addition of A list movie stars, a world-class fighter, and an industry luminary like Christophe Claret himself made for a memorable night.

For those unfamiliar with recent boxing history, Vasyl Lomachenko (or “Loma” as he is often known) has won one European title, two Olympic golds, and three world titles, fighting in both the light and featherweight divisions. On the other side of the partnership, Claret has been making watches with his own name on them for about a decade now. The Christophe Claret Loma watch is based on the Kantharos watch that debuted six years ago. This means that, despite its incredibly modern livery, the Loma watch is actually part of Claret’s Traditional Collection. While it may seem like a bit of an incongruous partnership, this watch does at least offer a stark alternative to the more classically styled forerunners. 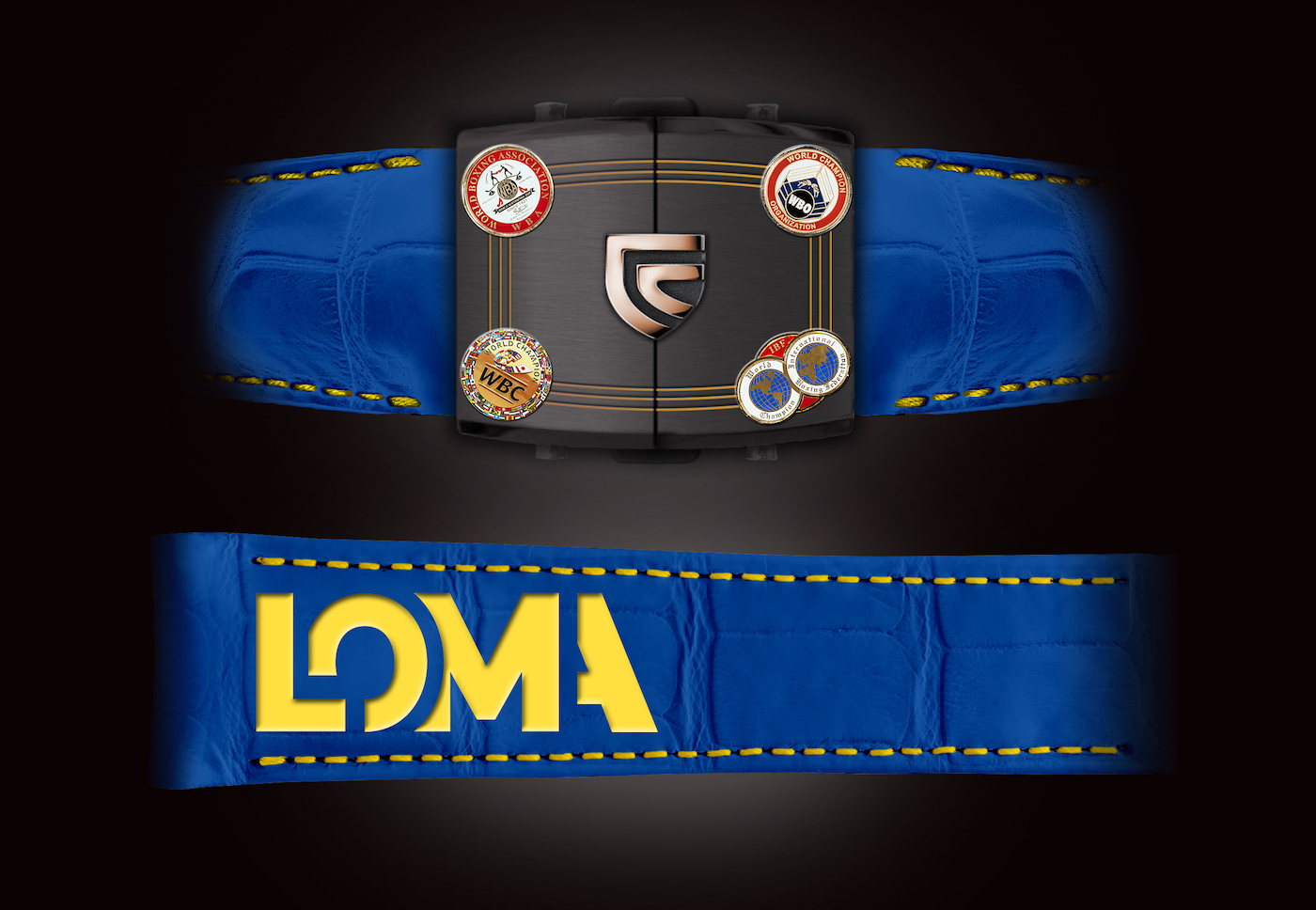 The Case and Dial

The bright blue and yellow of this watch’s skin pay direct homage to Loma’s national flag. The matching leather strap, with coordinated stitching and a debossed Loma logo, adds a final flourish to an already overt showing.

Set within a sizable 45mm × 15.83 mm PVD-treated titanium case, the high-contrast dial does its job well. As unsubtle as the colorway is, it is very effective. The hands, which are edged with yellow, are chunky and easily readable against any part of the dial (even the yellow and black sub-dials, which could have provided more of a problem were the hands just one color).

Those sub-dials display the chronograph minutes (3 o’clock) and hours (9 o’clock). In the dead center of each, there is a tiny Olympic medallion to commemorate Lomachenko’s two Olympic titles. 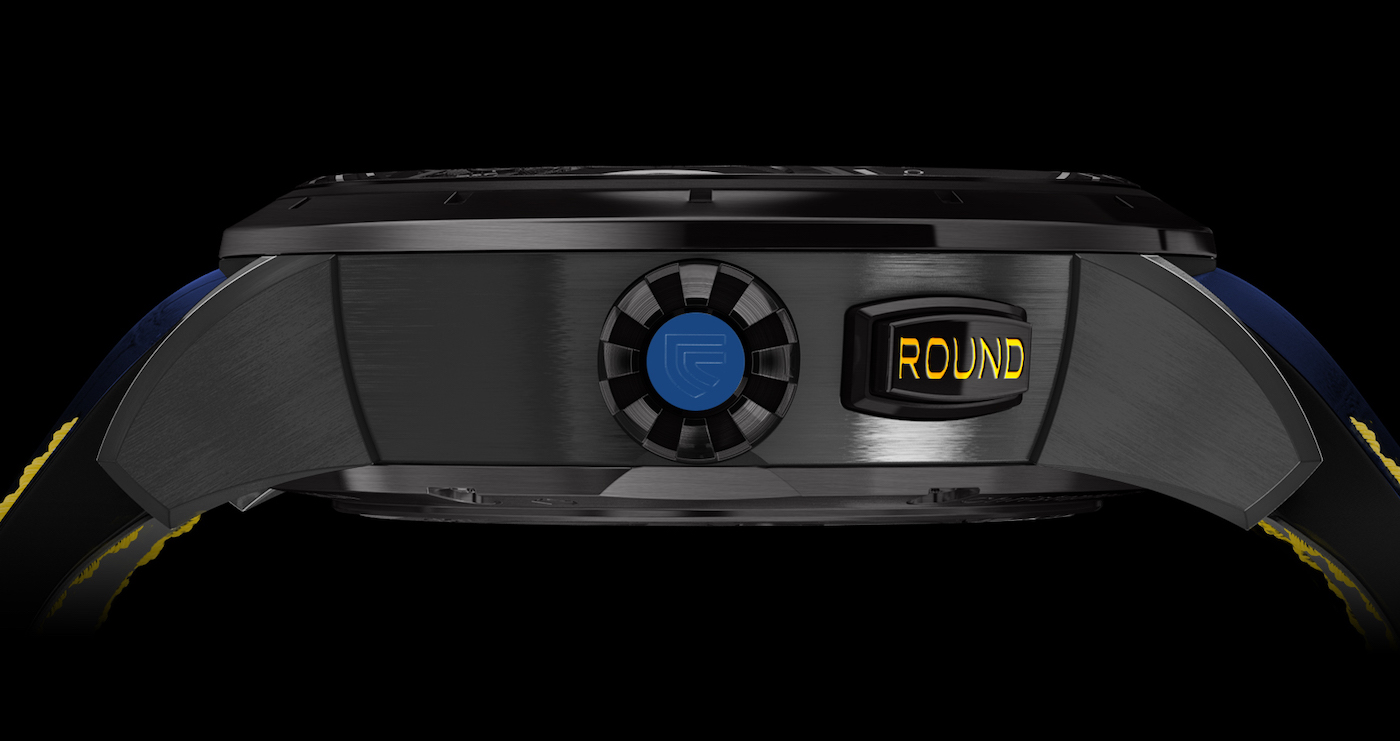 The most impressive thing about this watch, as is often the case with Claret’s Creations, is the movement and the number of functions it packs in. Caliber MBA13 has an operating frequency of 21,600vph and a power reserve of 40 hours. This in-house creation is automatically wound by a platinum rotor, contains 570 components, a swan-neck regulator, and polished anglage.

The most distinguishing feature of this model is the striking mechanism. The striking hammer is engraved with a little blue gavel that strikes a note when the mono-pusher chronograph is actuated to mark the commencement of the next round.

Although the appearance of this complication is a tad cutesy, it is highly technical. The striking mechanism of the Christophe Claret Loma Watch is fitted with a patented system that prevents the gong from vibrating against the inside of the case.

In addition to being chimed on its merry way, the central chronograph seconds hand is outfitted with a clutch disk system that prevents any kind of jump or wobble when the chronograph function is activated. These small considerations improve the user’s sensory engagement with the watch, which (theoretically) makes it more enjoyable to use.

Furthermore, the Christophe Claret Loma watch boasts a constant force mechanism, ensuring the even distribution of power from the watch’s mainspring to the escapement. This complication is visible on the dial at 6 o’clock and, aside from being useful from the perspective of isochronism, is supposed to be a nod to the constant force Loma has applied throughout his fights. The Christophe Claret Loma watch will be produced as a 20-piece limited series and retail for CHF 126,000 excluding taxes. Learn more at chistopheclaret.com.