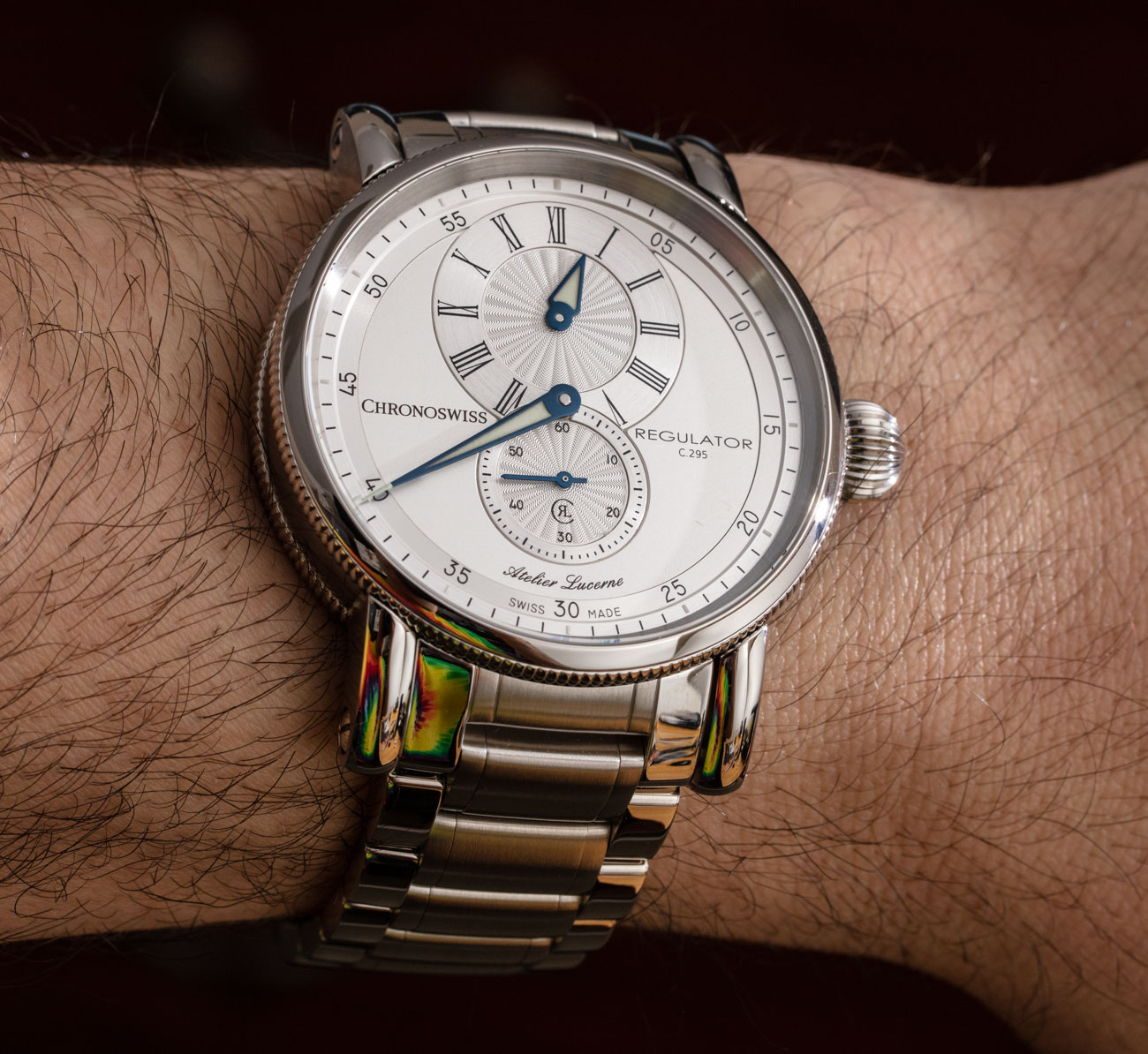 Regulator-style watches are a delicacy of timepiece face design that have nothing to do with mere design fancy. My experience talking about regulator timepieces with fellow collectors is that many people simply do not know why the dial has the minutes, seconds, and hours separated on their own dials. There is a traditional reason for that, and I’ll get back to regulator watches in a second. First, let me introduce the Chronoswiss Regulator Classic, which is one of a slew of regulator-style timepieces Chronoswiss has produced over the years. Today I review the reference CH-8773-SI Regulator Classic in its 41mm-wide form with a silver-tone dial and matching steel bracelet.

Chronoswiss is not alone in producing regulator-style watch dials today, and many brands, at one time or other, have played with noteworthy regulator pieces ranging from a Patek Philippe perpetual calendar to an Oris diver. The Chronoswiss Regulator Classic is a more formal-style of watch but in a sportier case that has 100 meters of water resistance. Chronoswiss also produces a smaller variant of the same watch in a 37mm-wide case, along with a few different dial colors. I opted to evaluate this silver-dialed model given that I believed it was the most legible. It is. 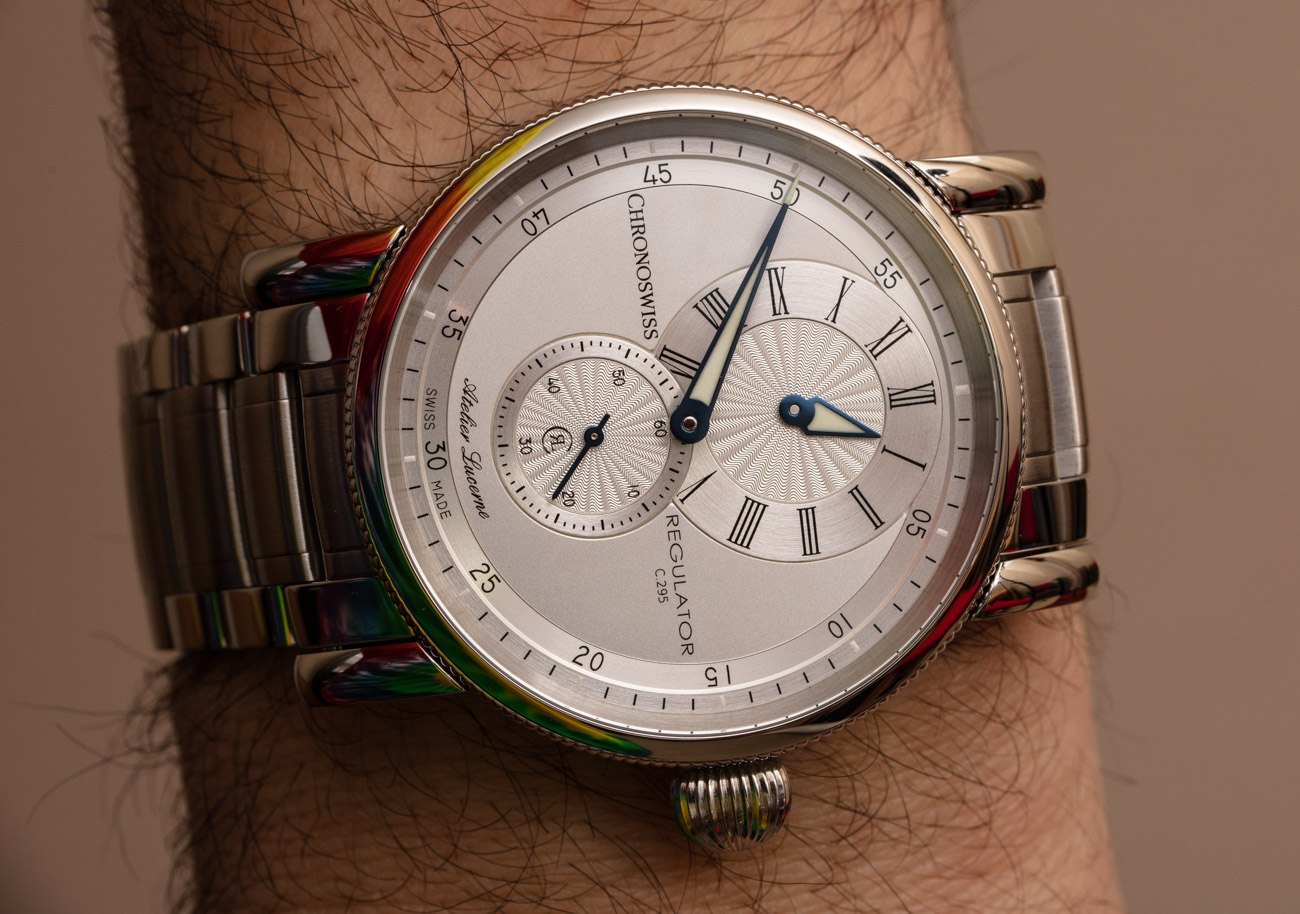 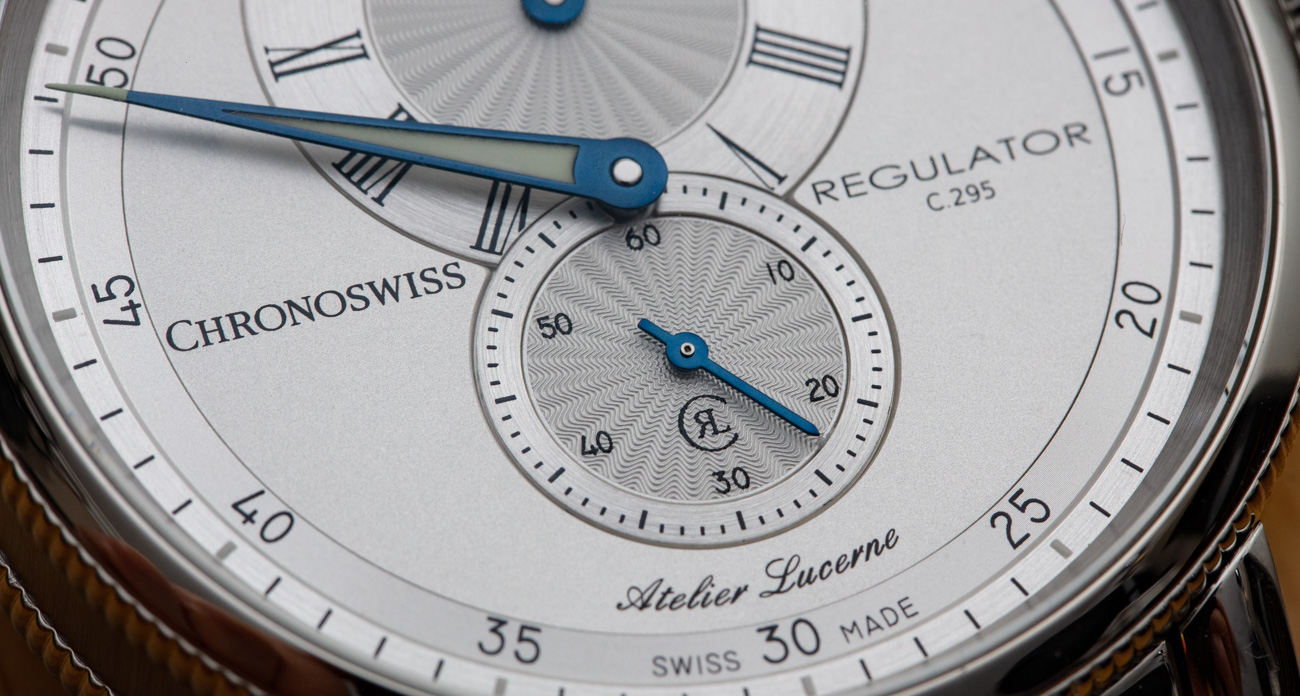 The flame-blued hands contrast very well against the traditional “Breguet-style” dial and are also painted with lume in their center. The dial has a few levels and finishes and ends up looking both classy and utilitarian. Regulator-style dials, for the most part, use the main dial in order to indicate the minutes, with smaller subdials to indicate the hours and seconds. Why this is relates to the history of regulator clocks, which were never actually meant for the wrist. Regulators came in a variety of styles but were supposed to be very accurate, as well as accordingly precise to read.

The term “regulator” comes from the notion that these very accurate clocks were used to regulate other devices — including less accurate clocks. In an era of mechanical timekeeping, when people needed to know the exact time or elapsing of time, they also needed to keep their timepieces “well-regulated” or, rather, adjusted for peak operational performance. To determine what time to set a watch at or to even determine if your watch is off, you need a reference clock, which the regulator also served as. Thus, a regulator clock would have served a crucial role in a variety of scientific, industrial, and navigational applications prior to the proliferation of cheap, high accuracy timekeepers in more modern times. 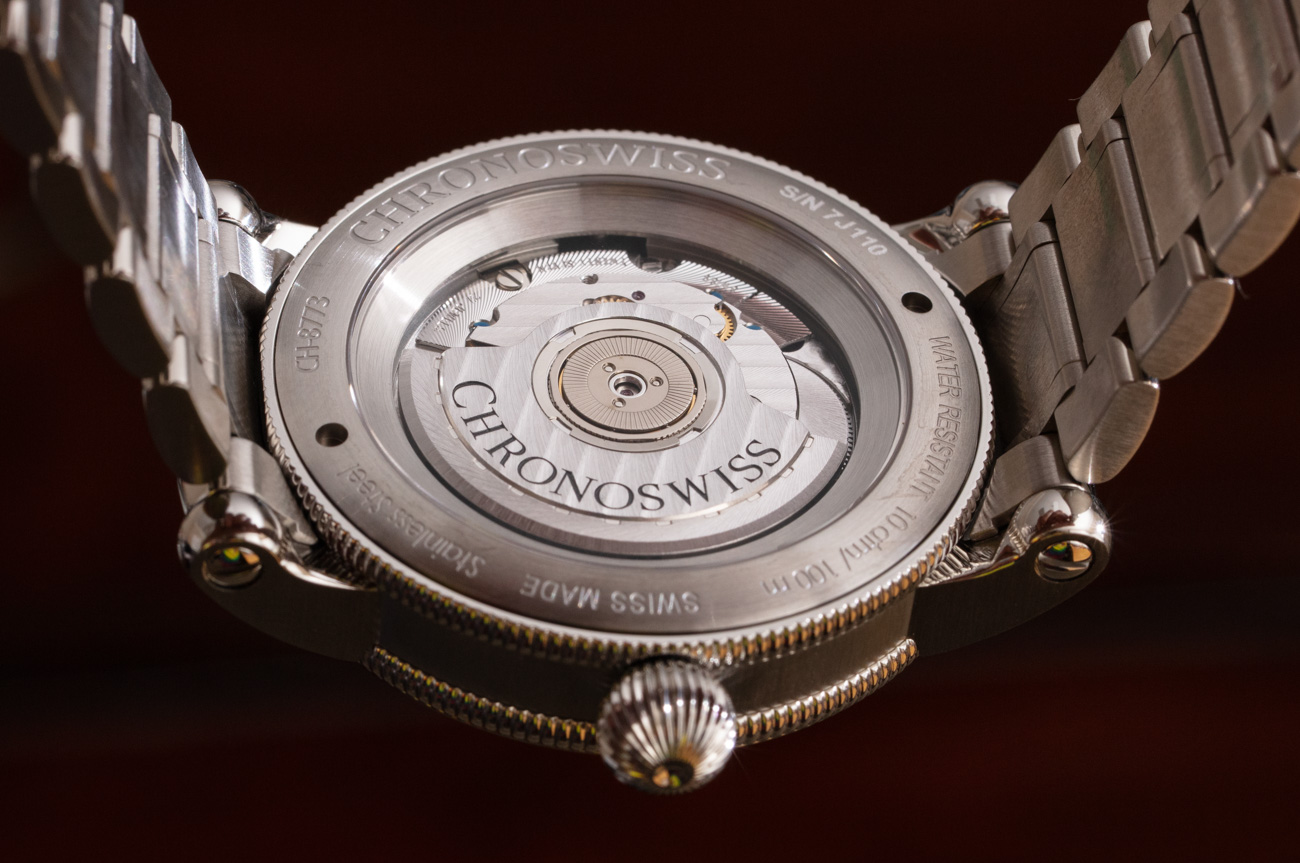 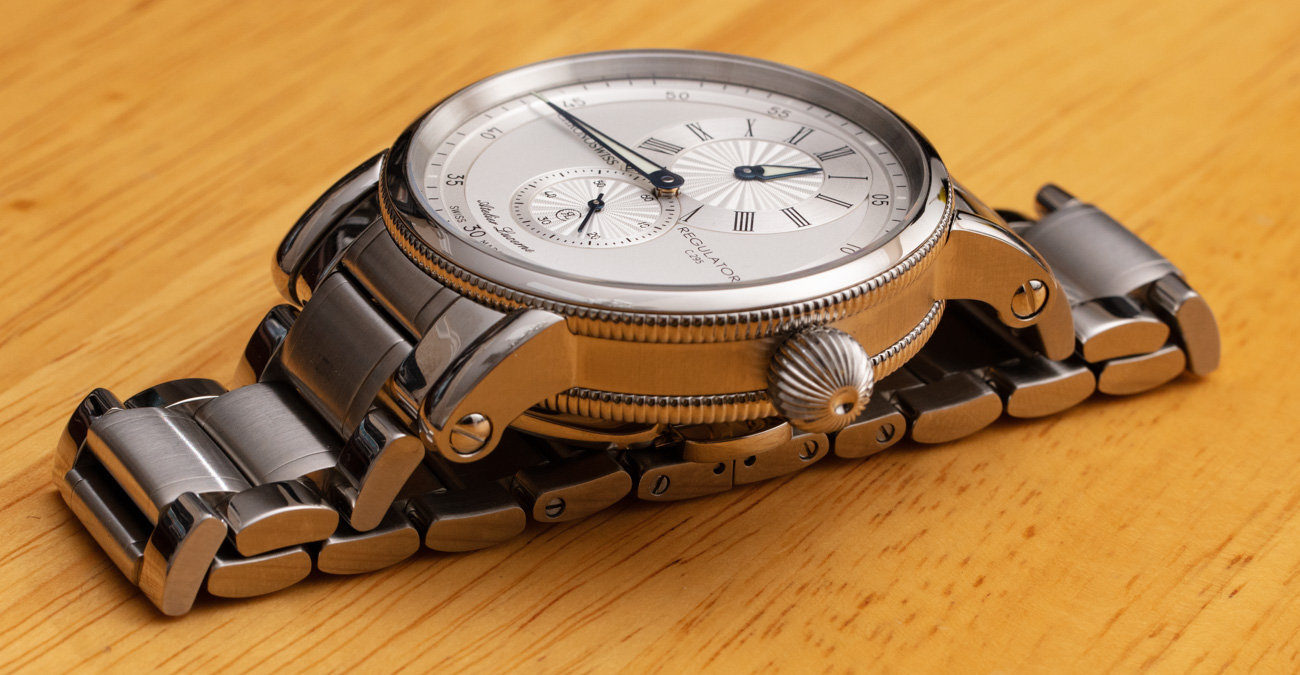 Many (but not all) regulator clocks used this particular arrangement of hands on account of the fact that people viewing them from afar were apparently the most interested in knowing the current minutes. Most people still prefer the traditional watch dial layout, which places three hands in a centrally mounted position, but as I said above, regulator-style displays are a delicacy enjoyed by many timepiece enthusiasts.

Chronoswiss currently produces mostly regulator-style dial watches and has made the particular instrument layout a key part of its brand identity these days. Something like the Regulator Classic is among its most well-rounded products when it comes to price, general versatility, and design. The said design is actually a merger of traditional regulator-style clock elements with a vintage aviator-inspired case. The steel case’s coined bezel and caseback, large onion-style crown, and large form of lugs are all elements of early pilot watches. Chronoswiss merges this with an elegant bracelet that mirrors all the curves on the case with slightly rounded links. The bracelet closes with a butterfly-style deployant clasp, and among the links is a half-link that allows for the bracelet to be sized more precisely for your wrist. 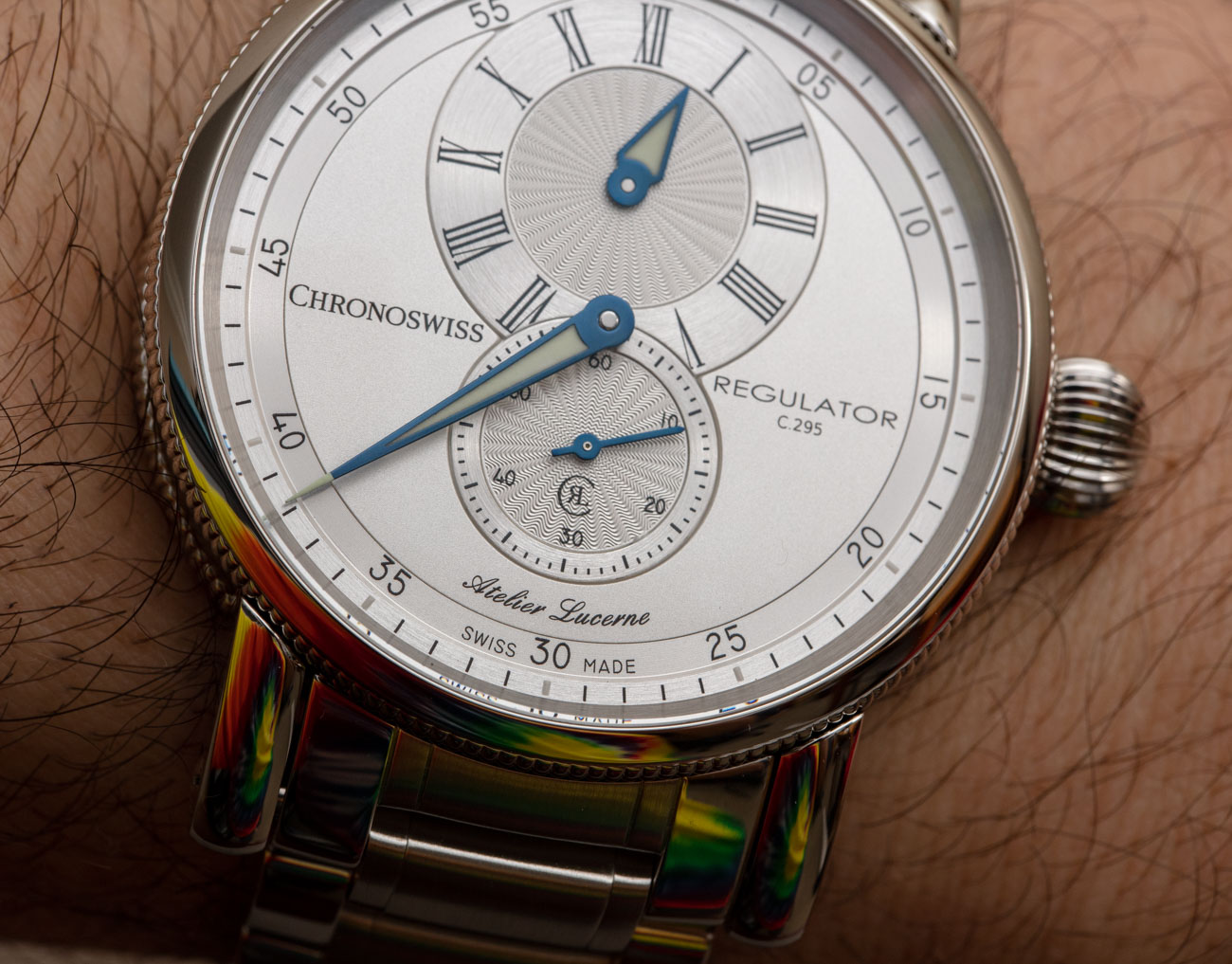 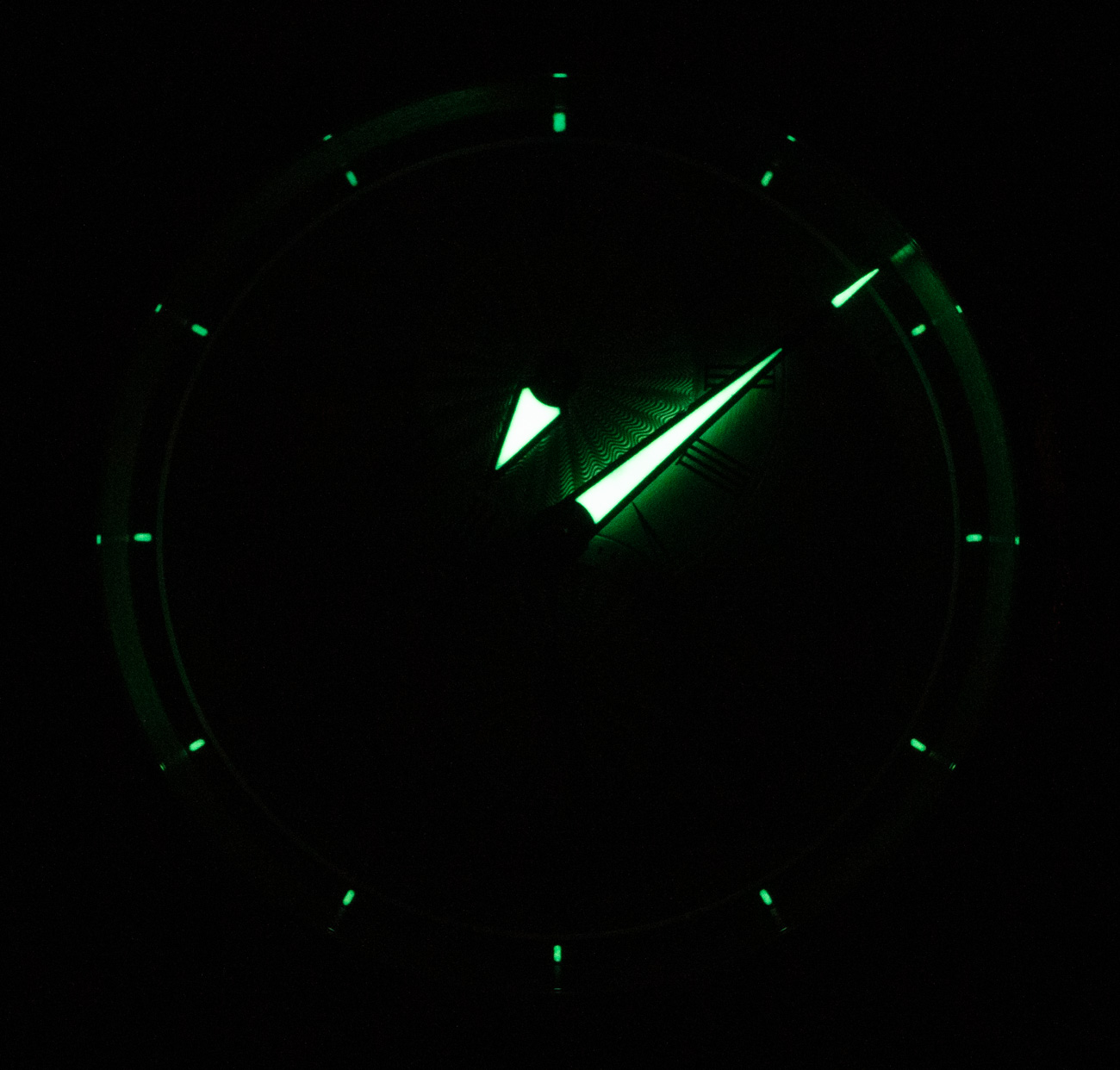 To achieve the regulator-style display, Chronoswiss uses a base Swiss Made ETA 2895-2 automatic movement with a module it collectively calls its calibre C. 295. The movement operates at 4Hz with 42 hours of power reserve and can be viewed through the sapphire crystal caseback on the rear of the watch. The C. 295 movement offers the hours, minutes, and seconds. Other Chronoswiss models can have more features, but the elegance of this time-only design is noteworthy.

At 12.7mm-thick and 41mm in diameter, the case has a roughly 51mm lug-to-lug distance, given their protruding style. Chronoswiss makes a pretty nice watch with the Regulator Classic, which nods to various important eras in timekeeping history and offers a formal watch style without a too-familiar look. Conservative people seeking a design that is nevertheless a bit eccentric are strongly encouraged to consider something like the Regulator Classic — especially since it can work so well as a daily watch. The easiest complaint to make about the watch is that, while not terribly common, regulator watches are available from other brands (certainly some of which are cheaper) and that Chronoswiss — while being a clearly respectable brand – hasn’t built enough of a personality around itself or its particular flavor of regulators. 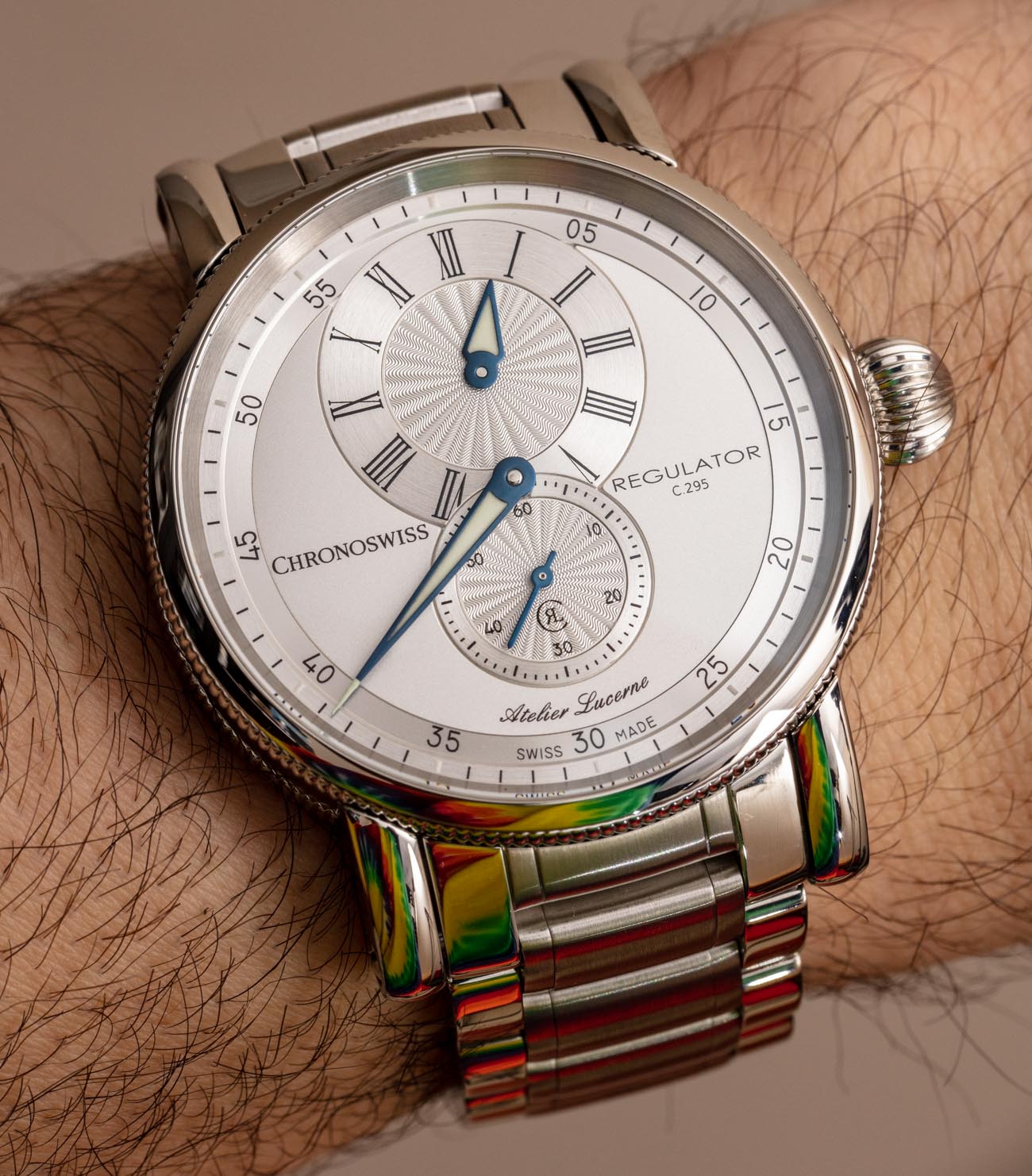 Wearing a regulator watch can be fun, and for those who take to their flavor of telling the time, they become an integral part of a collector’s personality. Chronoswiss’ offerings aren’t the cheapest out there, but as I said above, the company does indeed make a competent timepiece. Plus, the Regulator Classic is near entry-level for the brand. Price for this reference CH-8773-SI Chronoswiss Regulator Classic watch is $4,750 USD. Learn more at the Chronoswiss website here.

Necessary Data
>Brand: Chronoswiss
>Model: Regulator Classic (reference CH-8773-SI as tested)
>Price: $4,750 USD
>Size: 41mm-wide, 12.7mm-thick, and ~51mm lug-to-lug distance
>When reviewer would personally wear it: As a slightly unconventional daily wear or formal watch that has a bit of macho appeal to it, given the sportier proportions.
>Friend we’d recommend it to first: Timepiece-lover taken by the design of regulator style dials and could use a nice dressy steel-tone timepiece in their collection.
>Best characteristic of watch: New design refines the case and overall wearing experience as compared to many more historic Chronoswiss watches in a number of key ways. Good build quality and attractive execution of regulator-style dial in modern luxury watch form.
>Worst characteristic of watch: Dial is a bit simple compared to other more intricate Chronoswiss models. Watch lacks a coherent marketing personality or reason for having been designed aside from aesthetic virtues and brand product themes. Arguably expensive. 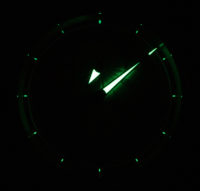 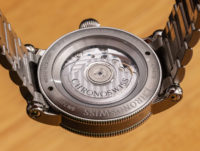 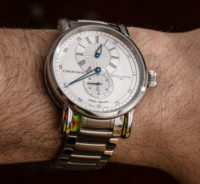 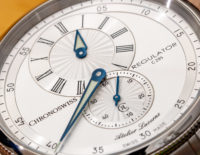 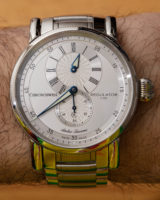 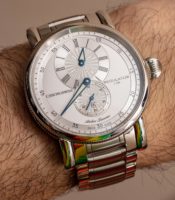 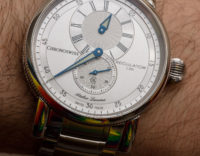 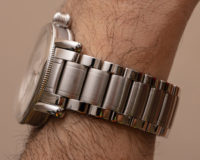 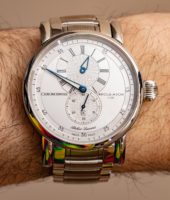 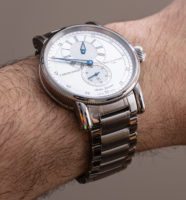