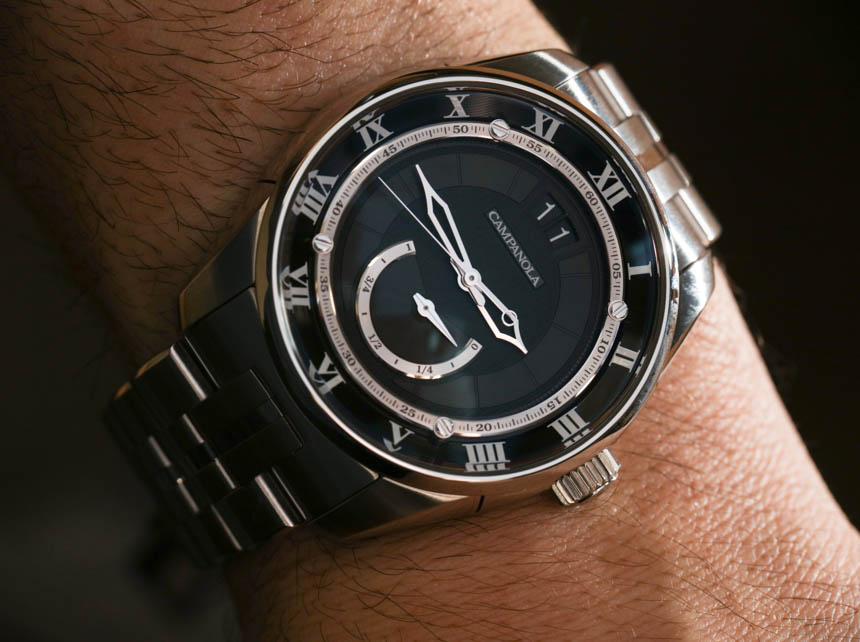 A few important points to discuss before proceeding with this hands-on experience of these interesting watches: First, Citizen purchased La Joux-Perret a few years ago, which includes the La Choux-de-Fonds-based mechanical movement maker’s watch brand Arnold & Son (whose products we tend to really admire). It was unclear what Citizen planned to do with the Swiss company, and the use of movements produced by them for its Campanola line seems to be the first overt connection between the two companies. 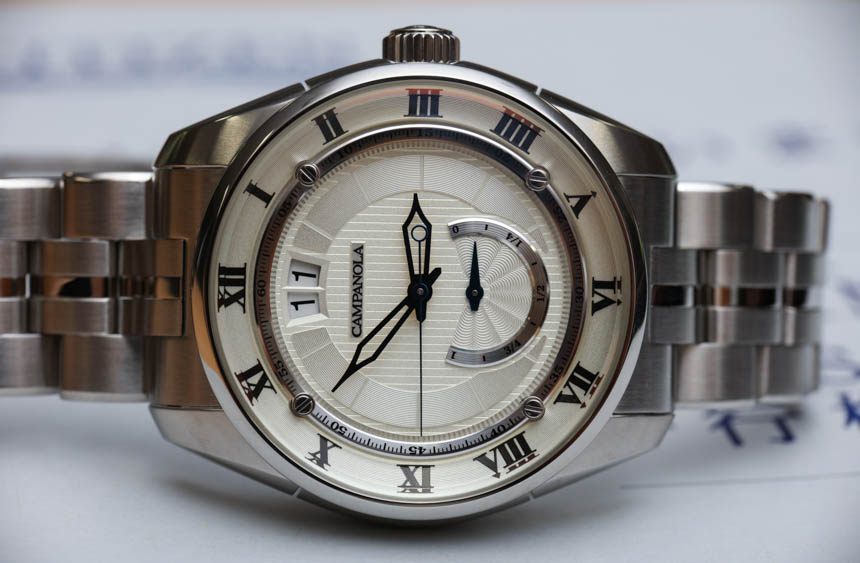 Second, even though Campanola is a higher-end sub-brand of Citizen, until this Mechanical collection came out, the products in the collection used exclusively quartz movements. Not just any quartz movements, but ones that were usually very complex, original to the collection, and hand-assembled by one master watchmaker. These would be similar in concept to the quartz movements found in many Grand Seiko timepieces, although in most instances much more complicated, as Seiko’s 9F family of high-end quartz movements only indicate the time. 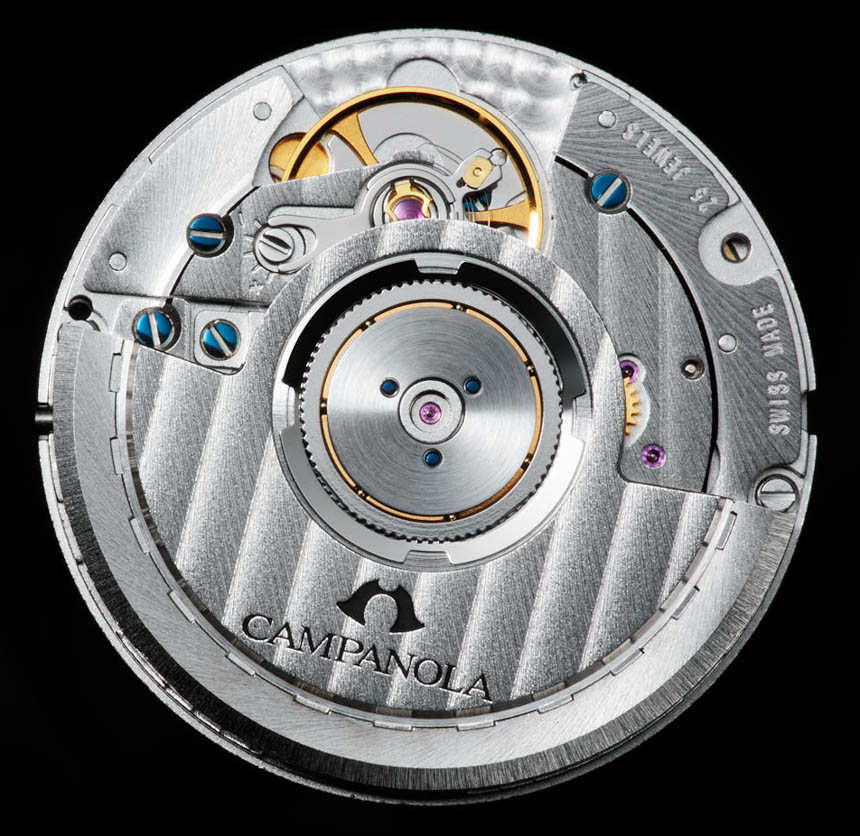 While Citizen produces other high-end dress watches, Campanola is meant to be all about vivid artistry and bold design. Most of their pieces are quite large, but the Citizen Campanola Mechanical collection is actually more universally wearable with a case that is 42mm wide (43.5mm with the crown). With a tall domed sapphire crystal, the cases are 14.40mm thick and have gracefully architected steel cases coated with Citizen’s Duratect coating which dramatically increases scratch resistance. 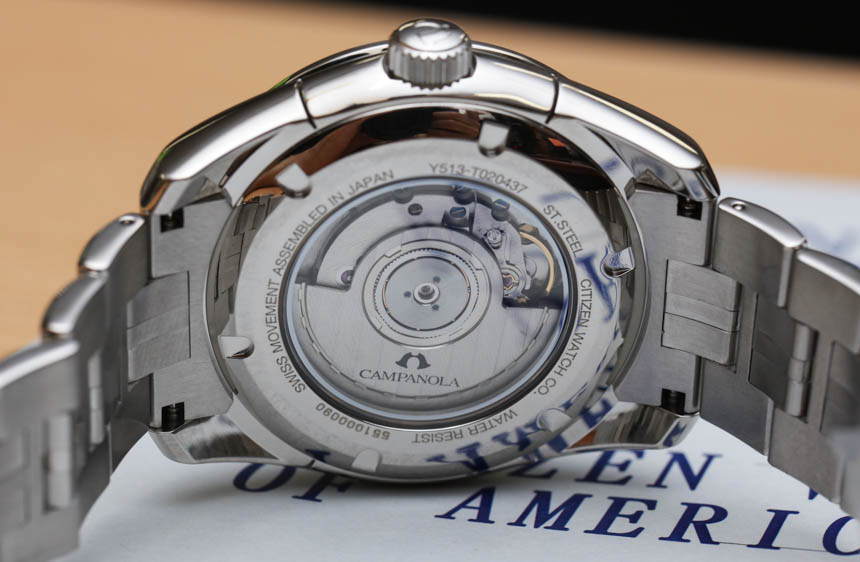 The beautiful irony of the Citizen Campanola Mechanical NZ0000 collection is that it is a Japan-made-and-designed watch with a Swiss movement. This is ironic because much more common are European watch companies that use Citizen’s Miyota movements. If anything, at least some collectors will purchase a Citizen Campanola Mechanical as the first of its type to represent this irony. Is this a good thing? I would argue so. There continues to be a vast prestige value to Swiss movements, and La Joux-Perret is no wimp when it comes to producing good-quality mechanisms. Citizen further cannot be challenged on this decision to use Swiss versus Japan-made mechanical movements because they actually own La Joux-Perret and can easily defend their decision by saying that Campanola continues to be an “experiment department” with low production and that they owe it to their customers to take chances and innovate… which is exactly what they are doing. 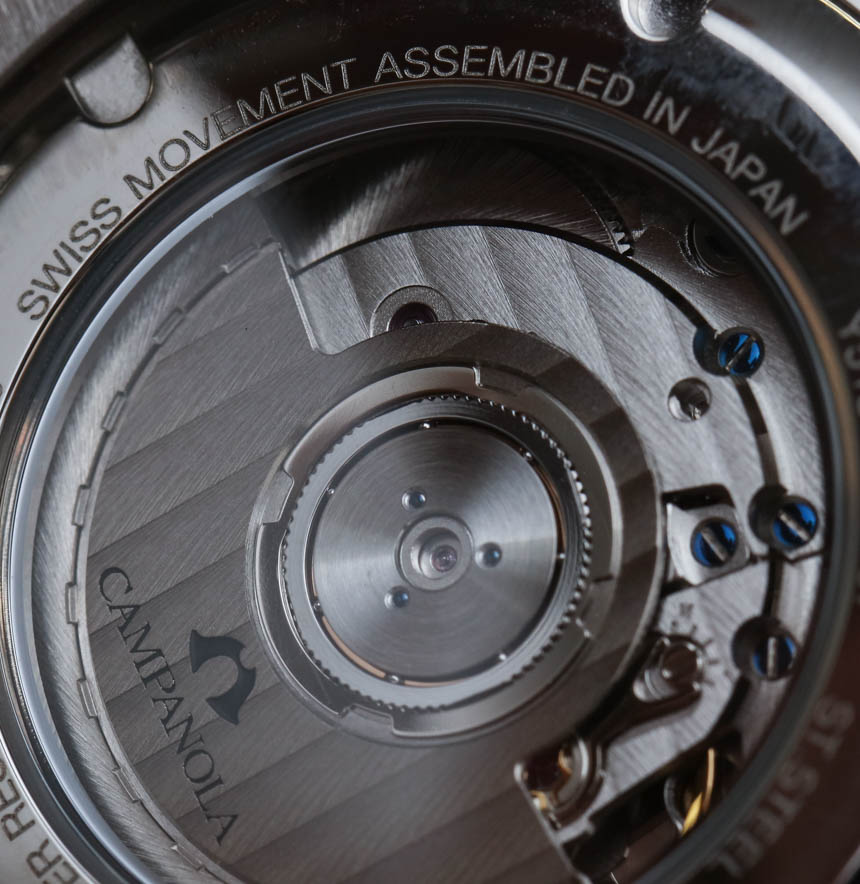 Priced comparatively well, the Citizen Campanola Mechanical collection doesn’t use the same mechanical movements you’ll see in Arnold & Son watches or most other companies that La Joux-Perret acts as a supplier to. The movement is modern albeit more simple (despite having useful complications) and is known as the caliber Y513. A self-winding automatic, the caliber Y513 operates at 4Hz (28,800) and has a power reserve of 42 hours. In addition to the time, the movement has a stop-second function (seconds hand stops when you pull out the crown), a big date indicator under 12 o’clock, as well as a power reserve indicator. You can view the movement through the rear of the case’s sapphire crystal exhibition caseback. I have to admit it is a bit unique for me to see the logo of a high-end Japanese brand on the rotor of a “Swiss Made” movement. There is a first time for everything 🙂 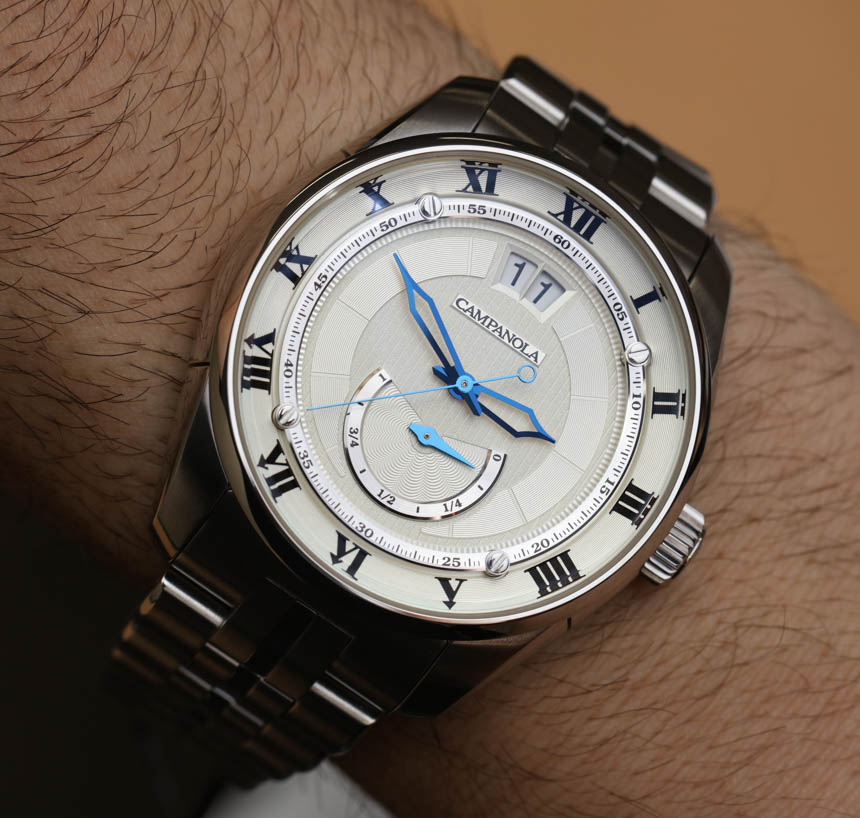 The case and dial designs of the Citizen Campanola Mechanical collection are distinctively Campanola, from the fine curves of the case to the raised chapter and flange on the dial. It was actually very interesting to enter the historically private world of Citizen’s watch manufacture to see elements of the Campanola watches being produced. People should realize that the same level of quality, care, testing, and precision is used to produce these watches in Japan as is used by the best watch makers in Switzerland.

Currently, there are six versions of the Citizen Campanola Mechanical NZ0000, and two of them are limited edition models, while one is likely a limited production “15th Anniversary” model. The most basic model is the Citizen Campanola NZ0000-07E that has a steel case matched to a black crocodile strap. The outer flange ring has Arabic numeral minute markers, while the inner ring uses Roman numeral hour markers – making this particular design a bit unique. With a black dial with silver-toned accents, and as the only model to use dauphine-style hands, this is the dressiest watch of the Citizen Campanola Mechanical NZ0000 lot.

Next, there are the Citizen Campanola NZ0000-58W (cream dial) and NZ0000-58E (black dial) watches which are the models I was able to shoot hands on. Like I said, I was able to see the entire collection, but only had an opportunity to shoot these two versions which are nicely representative of the Citizen Campanola Mechanical family. Unlike the NZ0000-07E, these models come on nicely made steel bracelets which are very comfortable, and the overall collection thus feels a bit more casual/sporty. Each has skeletonized hands which are attractive in design, but I feel they are the weak point of the watch as I see no need for them to be skeletonized. Legibility suffers as a result, and I think these should have been filled with lume or simply not skeletonized. 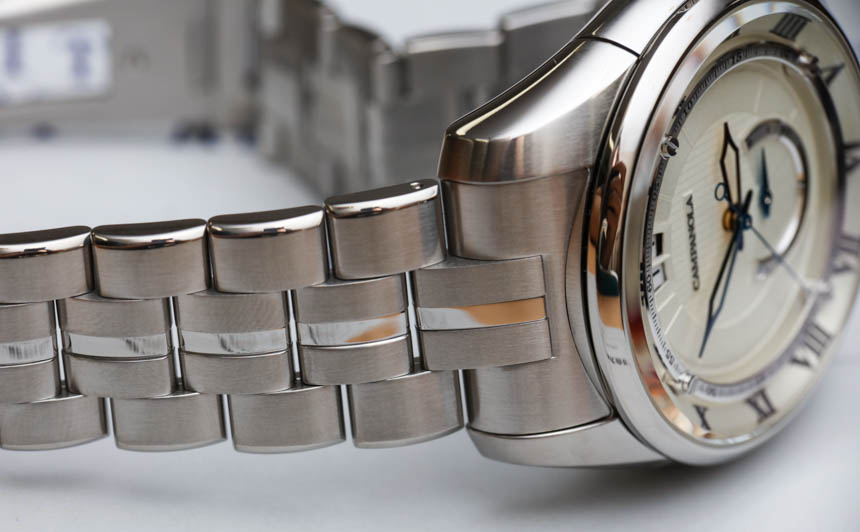 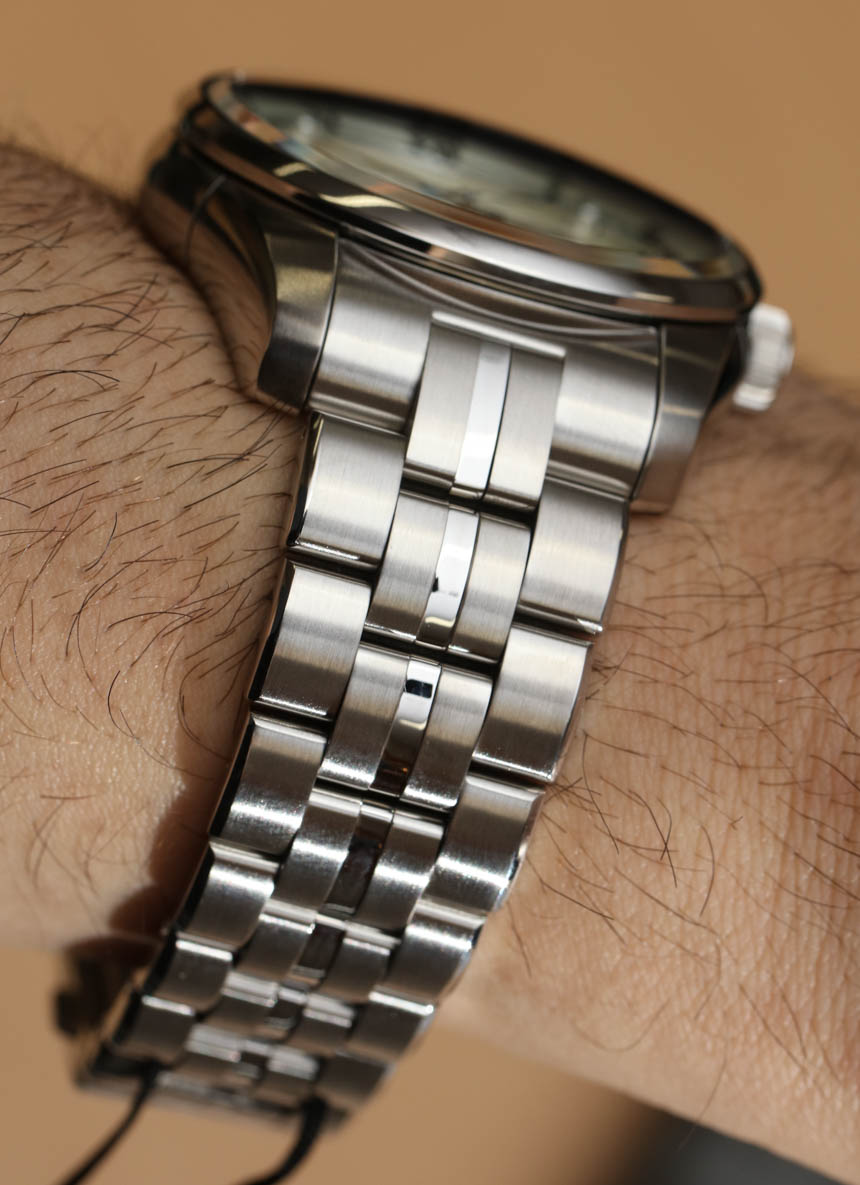 Citizen has vacillated between using skeletonized and non-skeletonized hands on other Campanola models, which indicates the sense that they aren’t really sure which they feel looks better. While the skeletonized hand look does work for some models, I feel that solid hands work better more of the time. The NZ0000-58W model has blue-toned hands while the NZ0000-58E has silver-toned hands. Moreover, these have Roman numeral hour markers on the outer flange ring, with minute markers on the raised chapter ring.