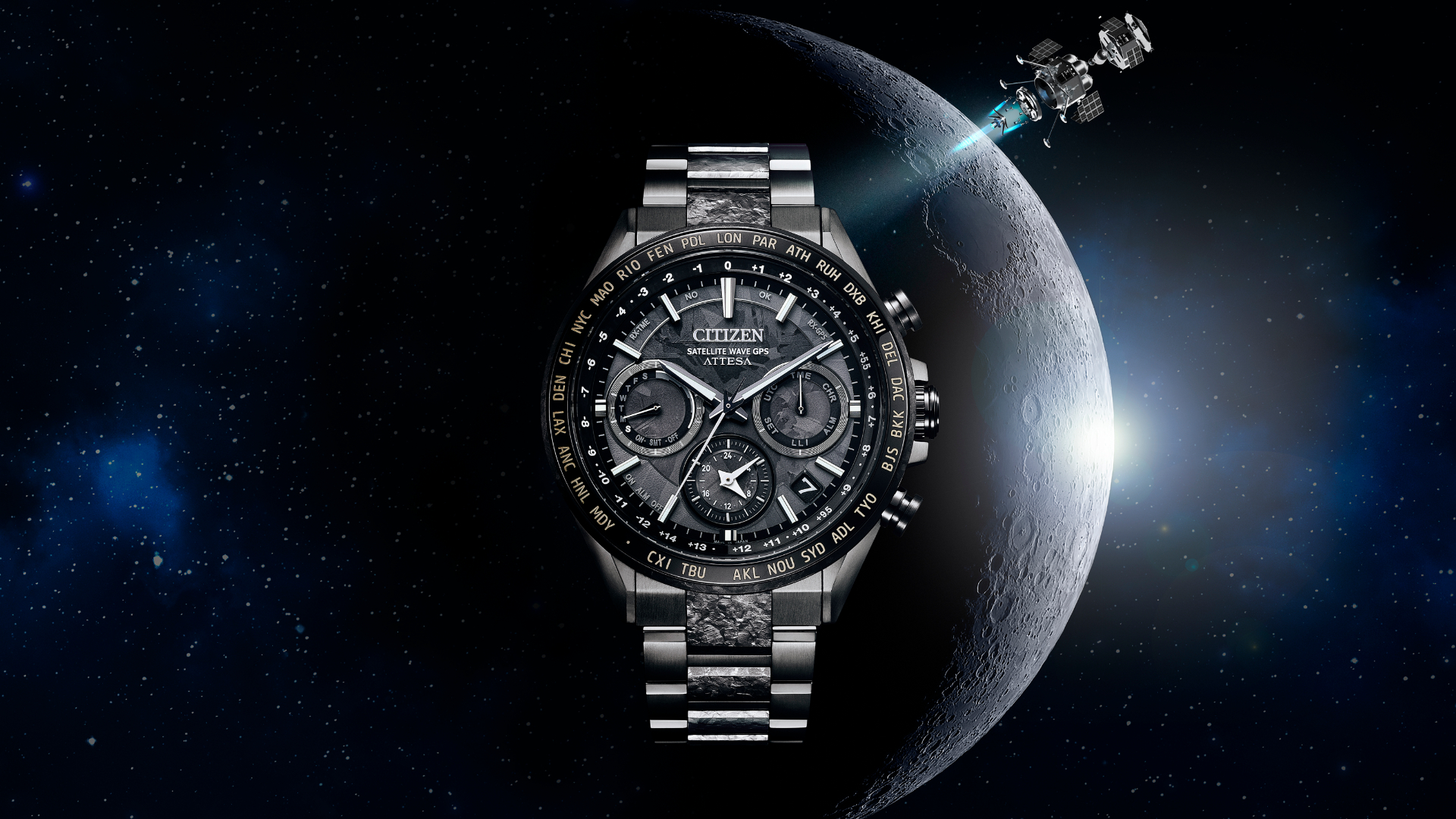 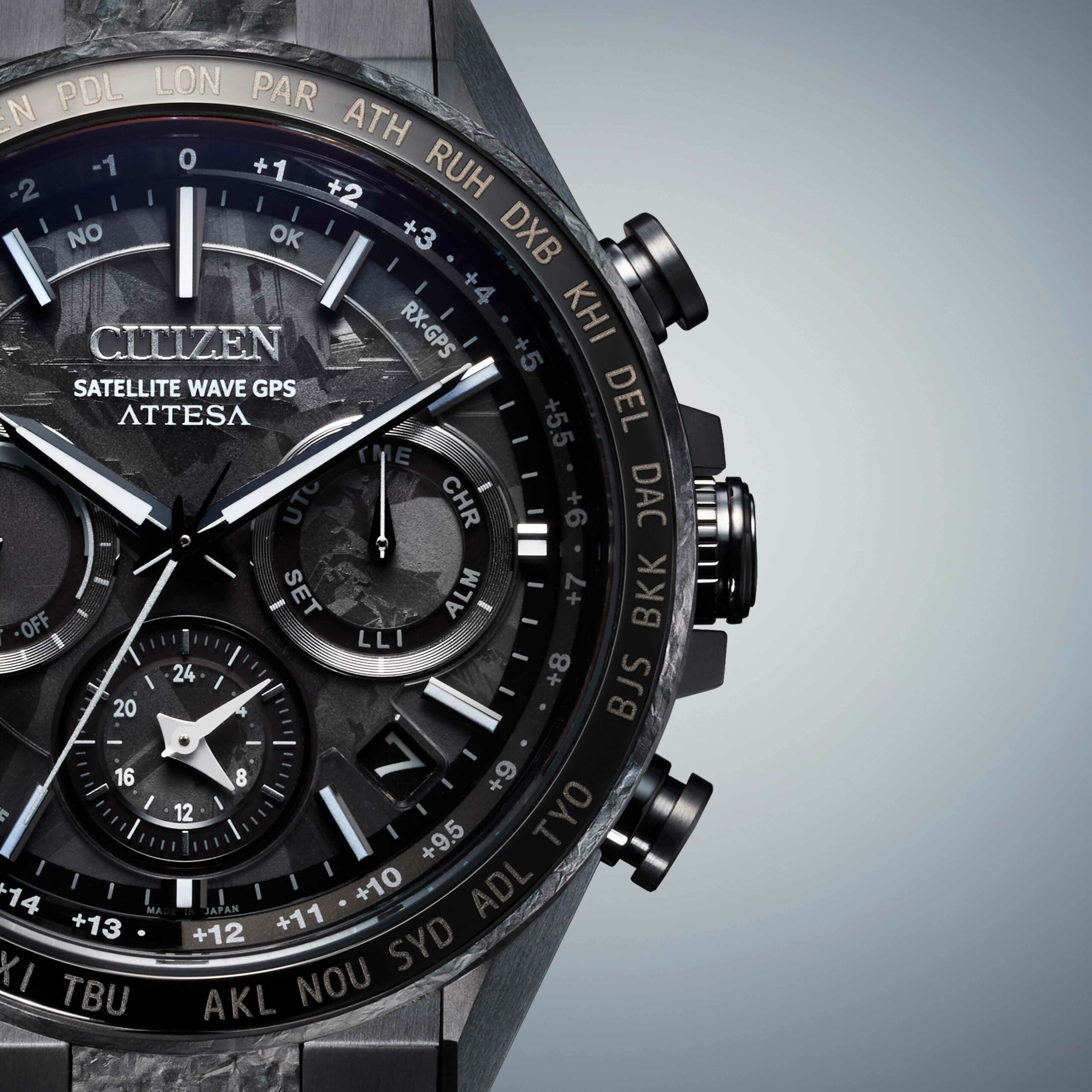 Back in 2019, Citizen announced that it would be supplying its proprietary Super Titanium alloy to the HAKUTO-R private lunar exploration program for use in the construction of its lander. Benefitting from Citizen’s proprietary surface hardening process, Super Titanium is approximately five times harder and 40% lighter than traditional stainless steel, and this makes it ideally suited for both space exploration and wristwatches. The HAKUTO-R program is scheduled to launch the first of its two planned lunar missions in early Winter 2022, and in addition to supplying the program with Super Titanium, Citizen has also produced a few limited-edition watches that pay tribute to its relationship with the HAKUTO-R expeditions. Last year, Citizen unveiled a duo of watches in Super Titanium that celebrated its involvement in the upcoming lunar mission, and now the brand has just announced a new limited-edition model that debuts its recently developed recrystallized titanium alloy. 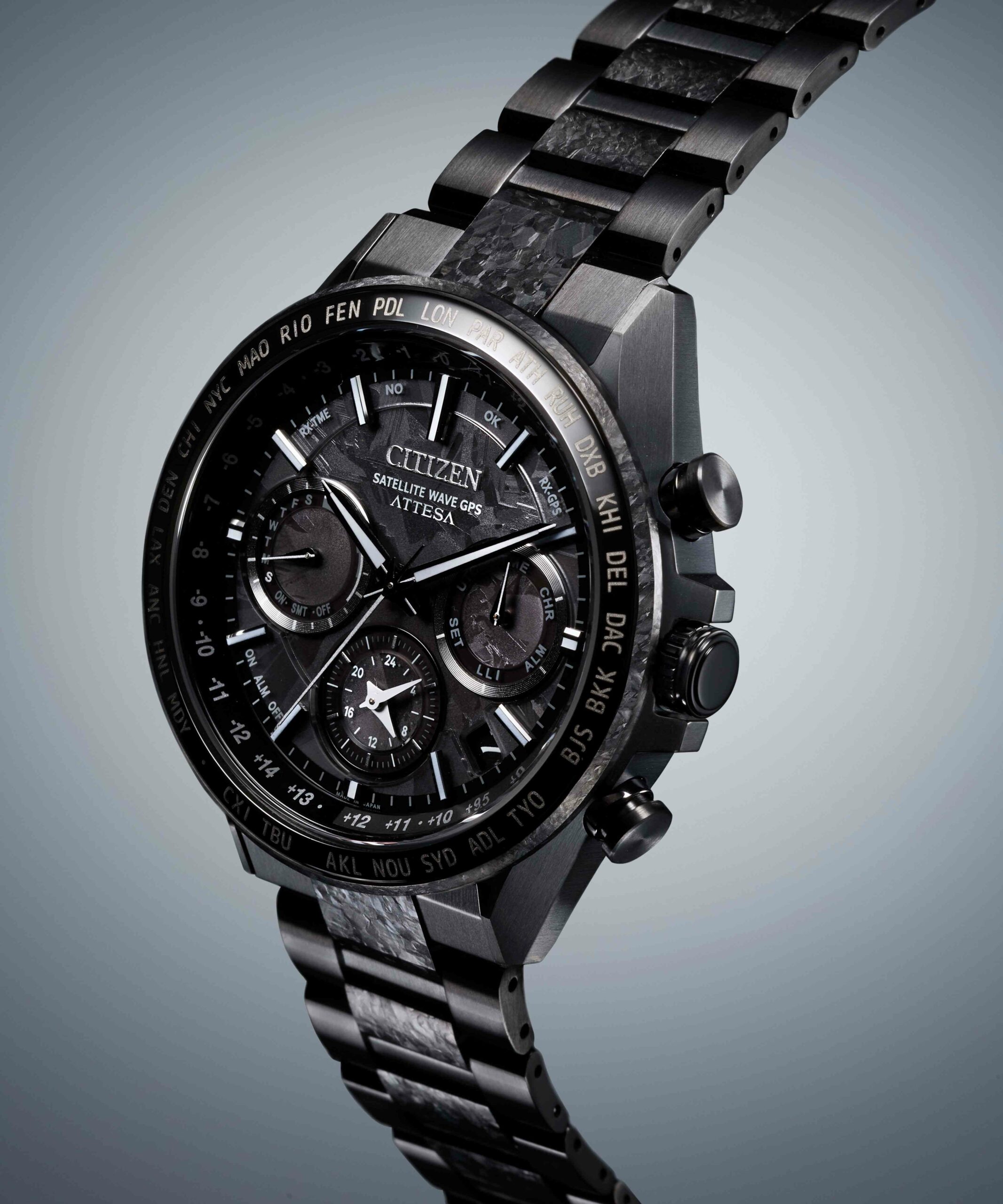 The 44.3mm case of the Citizen HAKUTO-R Collaboration Satellite Wave GPS watch is crafted from Super Titanium and finished with a black Duratect DLC coating. Those who are familiar with Citizen’s Satellite Wave GPS models will recognize the general shape of the case, with its short angular lugs and thick pushers flanking the crown. As the watch itself is a world-timer and features satellite GPS timekeeping, its bezel is adorned with the names of 27 different cities and prominently frames the watch’s curved sapphire crystal.

With that in mind, the party piece of this limited-edition HAKUTO-R Satellite Wave GPS watch is its use of Citizen’s recrystallized titanium alloy, which appears on both the edges of the bezel and the center links of its bracelet. Created by heating titanium to a high temperature and then cooling it under a controlled process, recrystallized titanium offers a unique and asymmetric appearance that somewhat resembles a mix between forged carbon and meteorite, which Citizen says is intended to be reminiscent of the lunar surface and its shifting shadows. Due to the nature of the production process, the crystallization pattern will differ between watches, with no two examples appearing exactly the same. The caseback is also made from Super Titanium and includes a diagram of the HAKUTO-R lunar lander to symbolize Citizen’s role in the space exploration program and its material contributions to the lander’s development. 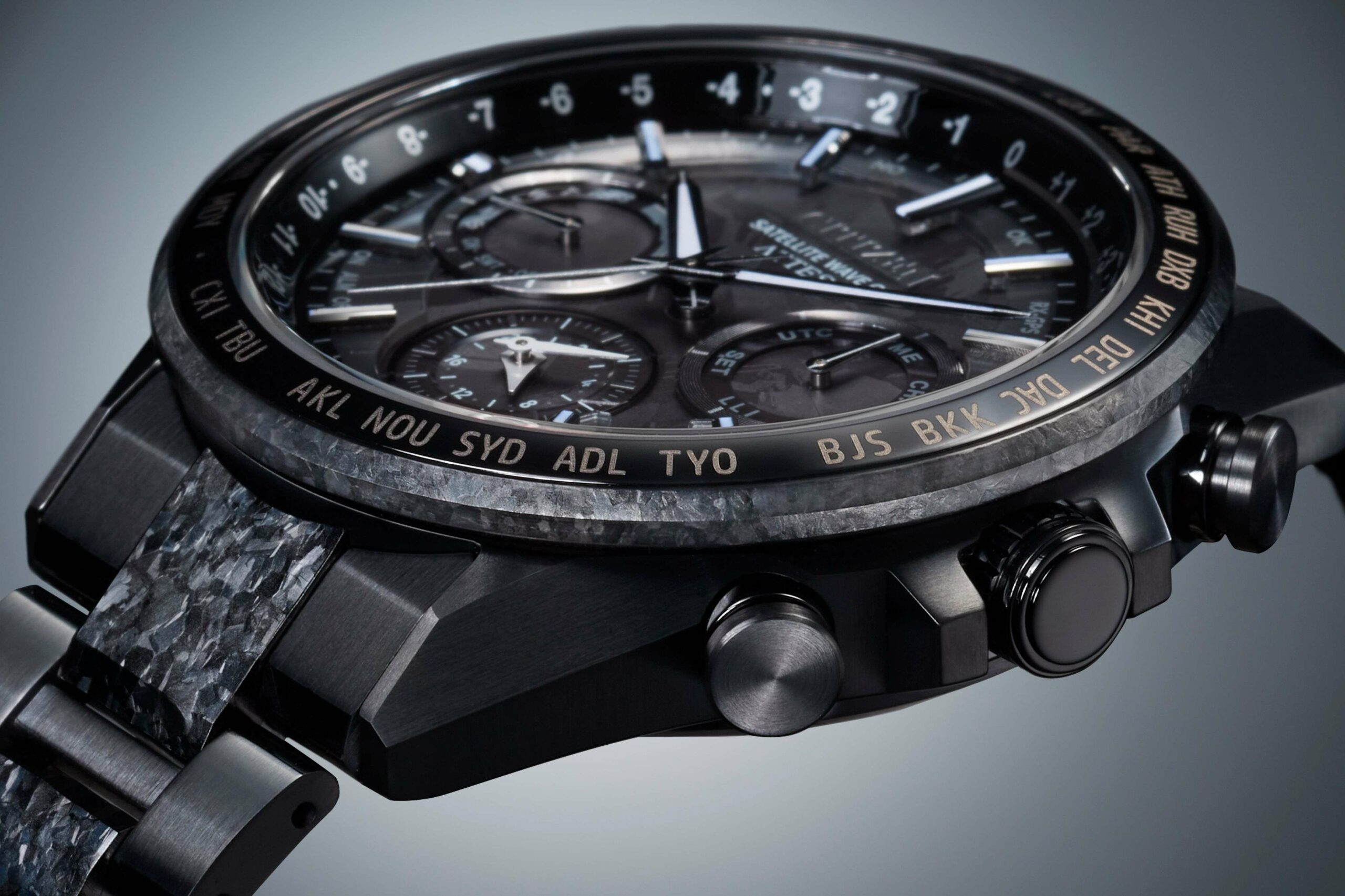 The dark black and gray appearance of the recrystallized titanium Citizen HAKUTO-R Satellite Wave GPS watch extends to its dial, which includes a subtle pattern that echoes the titanium crystals on its bezel and bracelet. The various raised components and recessed sections add visual depth to the dial, while all of the markings and scales are rendered in either white or a muted shade of gray for a monochromatic overall appearance.

Despite its advanced functionality, the Citizen HAKUTO-R Satellite Wave GPS watch offers a completely analog display, and it includes a fairly standard dial layout consisting of three centrally-mounted hands, a trio of registers, and a small date window at the 4:30 location. Although the dial features a crystallized titanium pattern on its surface, it is not actually made from titanium, as the dial itself must remain slightly transparent in order for light to be able to pass through it and reach the solar panels that are hidden directly below its surface. 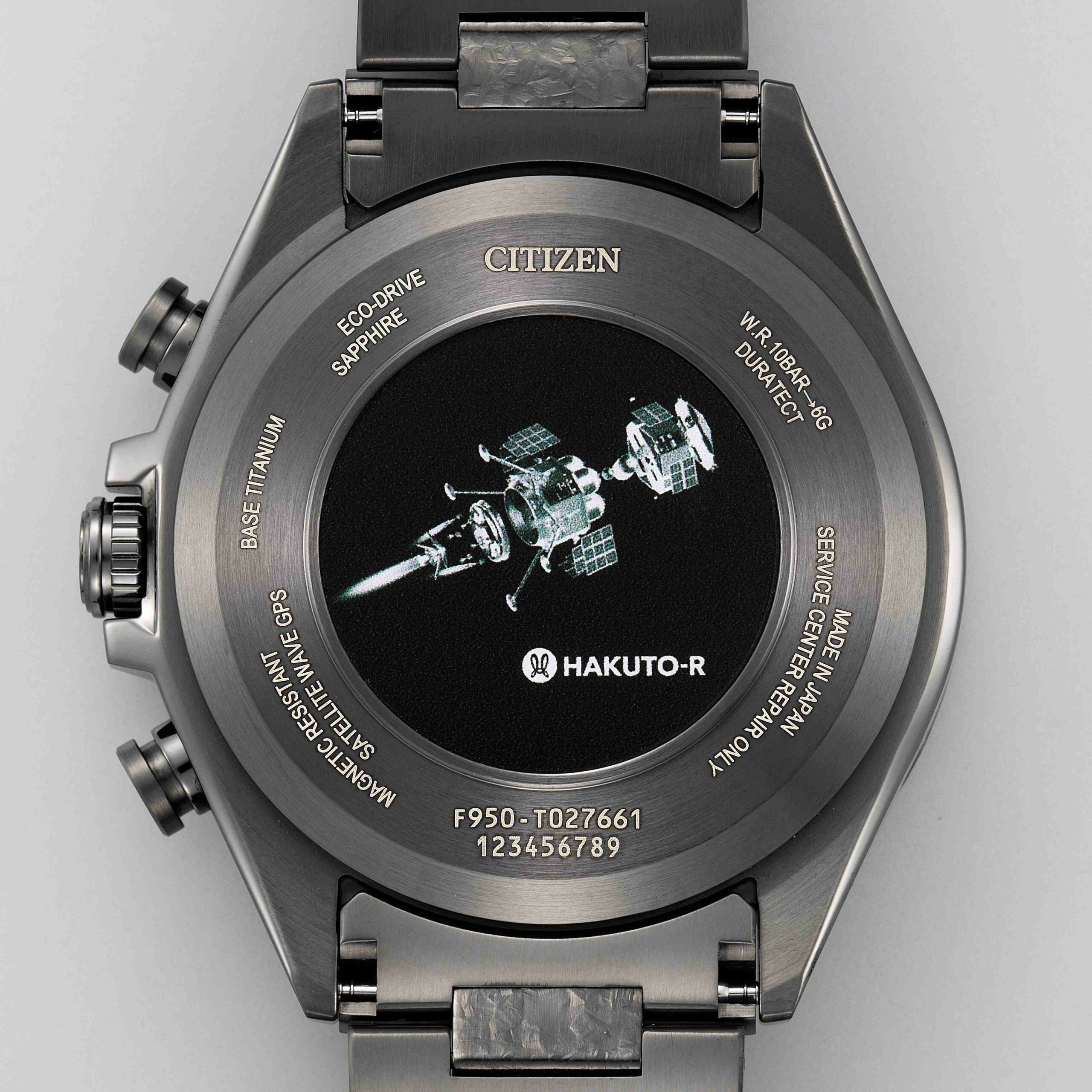 Internally, the limited-edition Citizen HAKUTO-R Satellite Wave GPS watch is powered by the brand’s in-house Caliber F950 movement. Citizen is famous for its solar-powered range of Eco-Dive quartz movements that are capable of powering themselves with any ambient light source, and the Cal. F950 is one of the brand’s top-of-the-line models, offering an extensive list of advanced features including an alarm, perpetual calendar, chronograph, dual time zone display, power reserve indicator, daylight savings time selector, world time feature with 27 cities, and satellite GPS timekeeping.

Quartz watches can often carry somewhat of a stigma, but not all quartz timepieces are created equal, and movements such as the Eco-Drive Caliber F950 enable the timepieces they power to offer advanced functionality that far exceeds what is possible with any mechanical movement. The bracelet fitted to the Citizen HAKUTO-R Satellite Wave GPS watch carries on the theme established by the rest of the timepiece, and it is crafted from Super Titanium with a deep black DLC finish. While the entire bracelet is made from Super Titanium, the fact that its center links appear in recrystallized titanium gives it an almost two-tone effect, despite its all-black color profile. 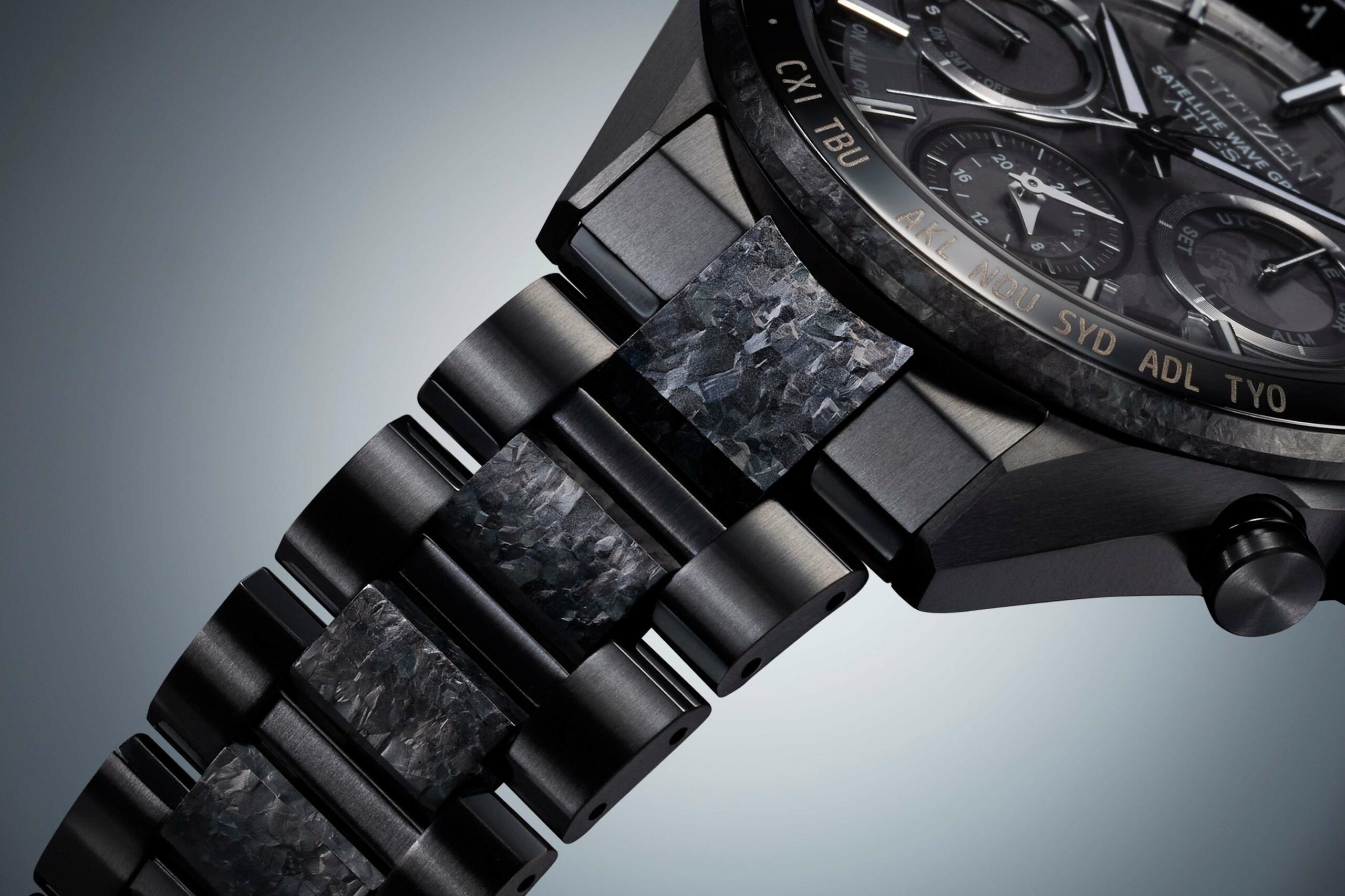