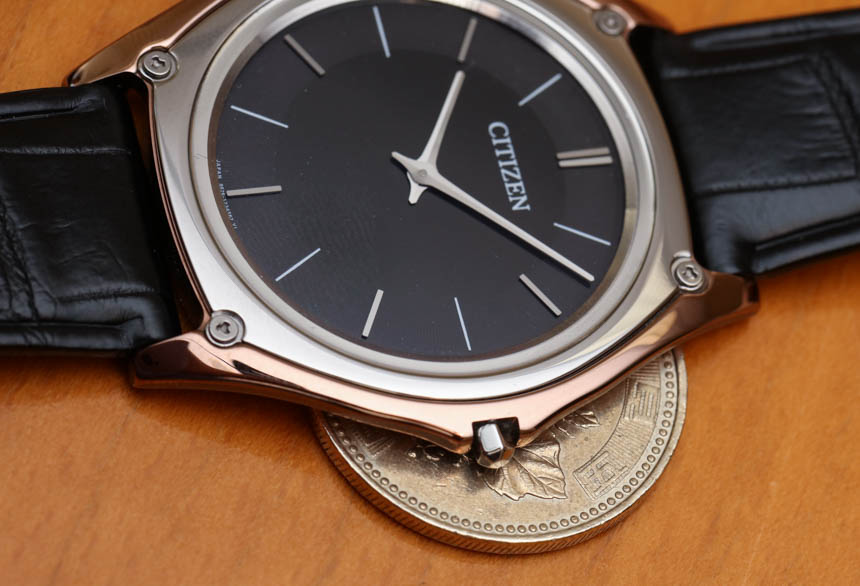 Citizen Eco-Drive One Watch: Light Powered & Less Than 3mm On The Wrist 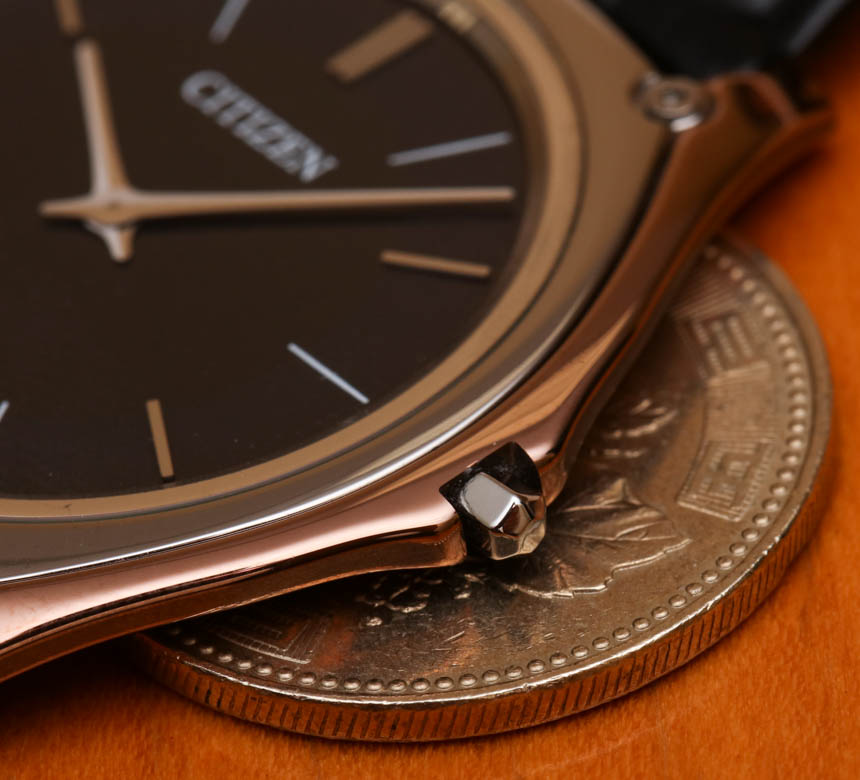 Upon the 40th anniversary of Eco-Drive light-powered quartz movement technology, Japan’s Citizen watches now introduces the Eco-Drive One. Containing a movement that is 1mm thick and a case that is just 2.98mm thick, it probably goes without saying that the Citizen Eco-Drive One is the slimmest light-powered watch in the world. This is yet another technological step forward for this member of the “big three” Japanese watch makers, and the story of the brand’s philosophy as well as Eco-Drive is worth discussing as part of our introduction of the Citizen Eco-Drive One high-end quartz timepiece collection. 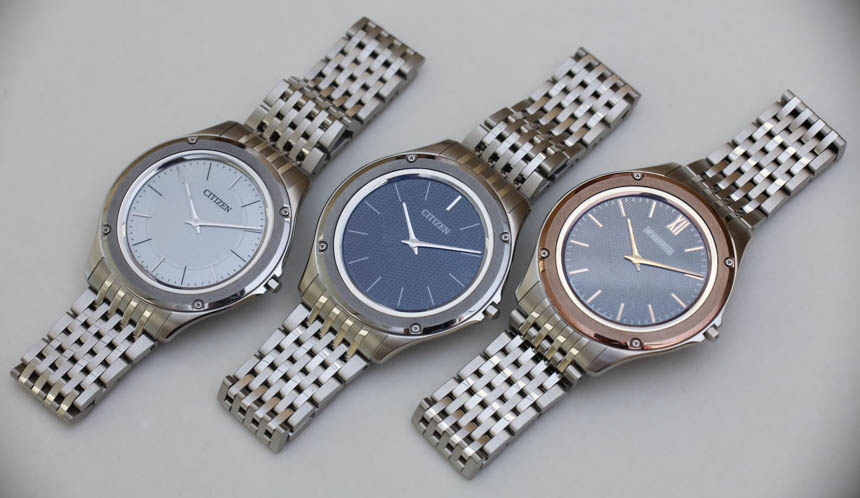 Citizen asked aBlogtoWatch to join them for their inaugural press trip allowing journalists into their world for the first time – and during that trip, I got to check out these early prototype versions of the Citizen Eco-Drive One prior to their launch at Baselworld 2016. Similar to the other major Japanese watch makers such as Seiko and Casio, Citizen is a massive company of almost 20,000 people, but their personality and character has remained, for the most part, quite secretive until now. 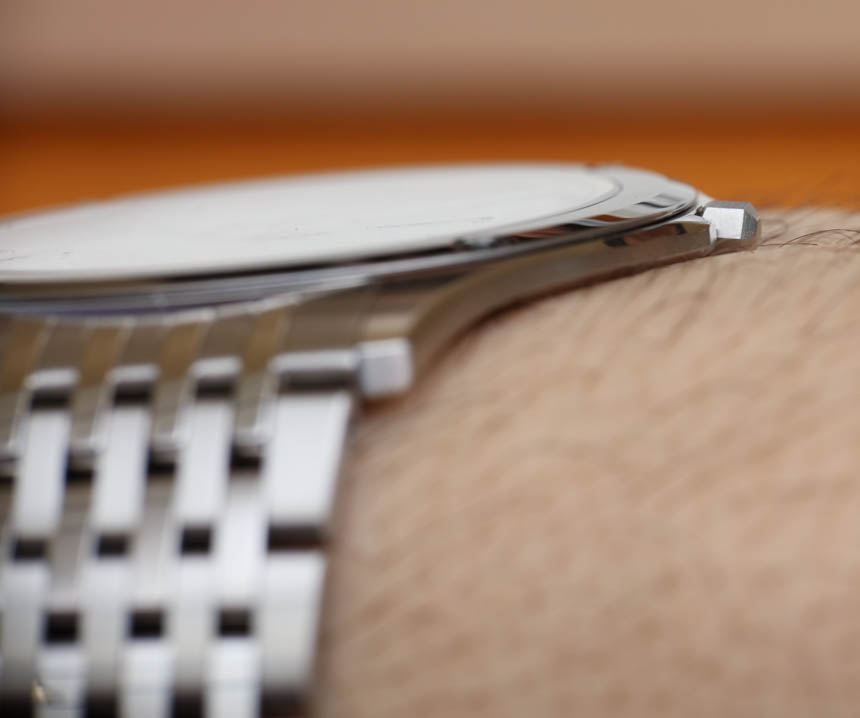 Such an insular attitude is typical of major Japanese companies, probably because of the vicious rivalry they are known for having with their competitors. Only in the last decade or so have the major Japanese watch makers begun to open their doors in a way that Swiss watch companies have been doing for a while. I’ll quickly say that while the Europeans are undoubtedly better storytellers, the achievements Japanese watch makers have experienced in the modern era far surpass those of their colleagues to the West. 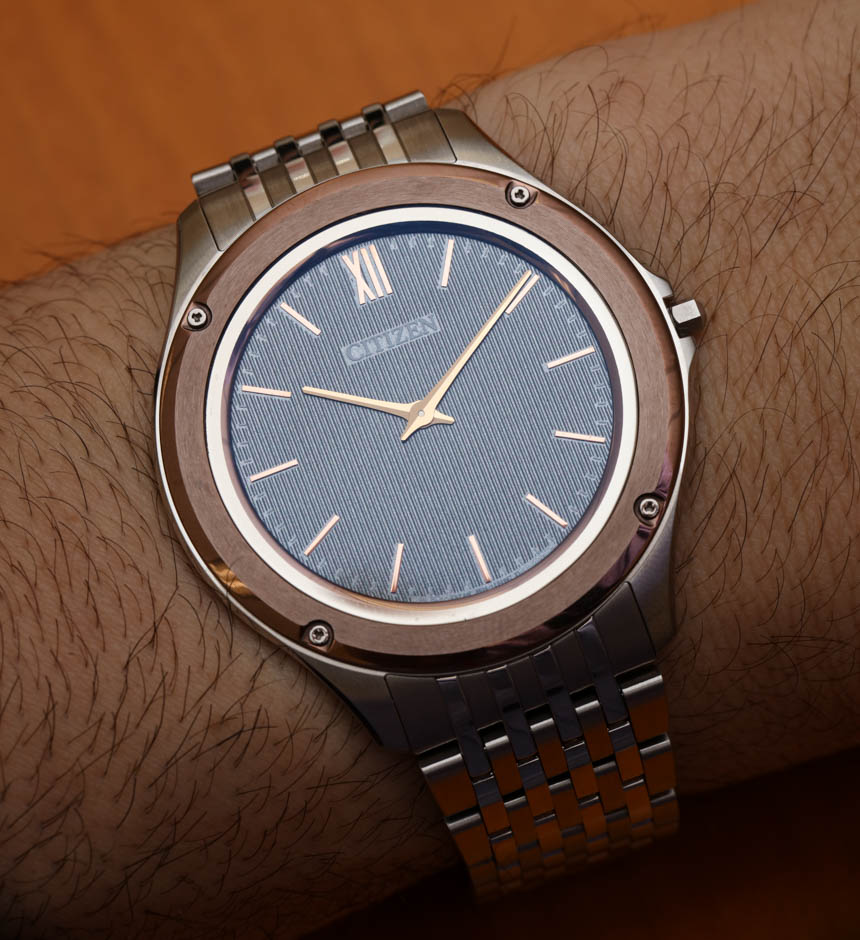 This newer policy of openness is a good thing for watch maker and watch lover alike. In an era where increasingly (or totally, depending on your point of view and lifestyle) watches are used as a status, style, and personality icon more than a tool, understanding the work and effort that goes into the production of a product is far more important than the cold hard operating specifications of any given item.

Such a concept should probably help explain at least one of the reasons watch lovers tend to prefer mechanical watches over quartz ones. Terms like “cheap, boring, and unoriginal” are typically used when describing quartz electronic watch movements while terms like “hand-made, historic, beautiful, innovative, and performance” are often used to describe mechanical watch movements. A few years ago, aBlogtoWatch administered a poll asking people whether they would prefer a high-end quartz watch or a low-end mechanical watch. The majority opinion was for the low-end mechanical watch. Could this sentiment be a byproduct of consumer misunderstanding regarding the larger world of quartz movement technology? 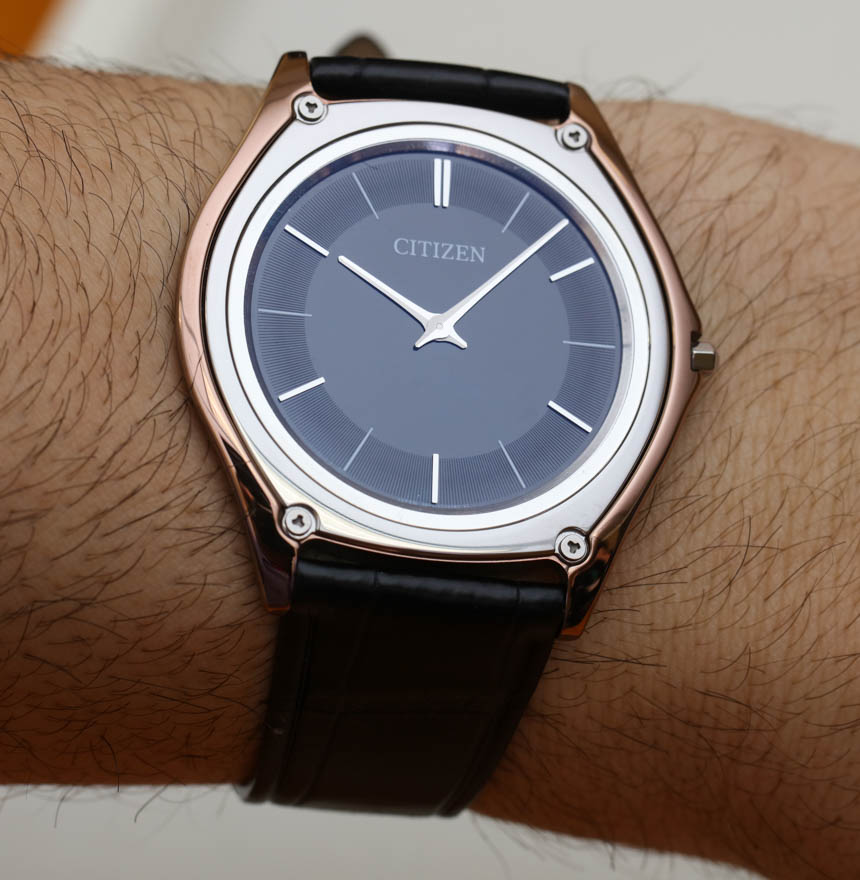 In the context of quartz movements, it is true that there are sophisticated automated production lines to help or entirely produce certain movements. With that said, there is an incredible amount of hand-work and human attention dedicated to most all of the better quartz movements out there. Moreover, the same level of skill, care, hand-assembly, and testing is applied to the production of high-end quartz movements as to that of high-end mechanical movements. Of course, high-end quartz movements aren’t finely decorated in the same way that high-end mechanical movement are – but again, they are priced accordingly. Where quartz always excels is in performance and convenience, and this is something most of us utterly take for granted. In fact, the ownership experience of a quartz watch is so hands-off most of the time, we as watch lovers fail to create a personal relationship between person and machine like we often do with mechanical watches that need to be wound and adjusted regularly. 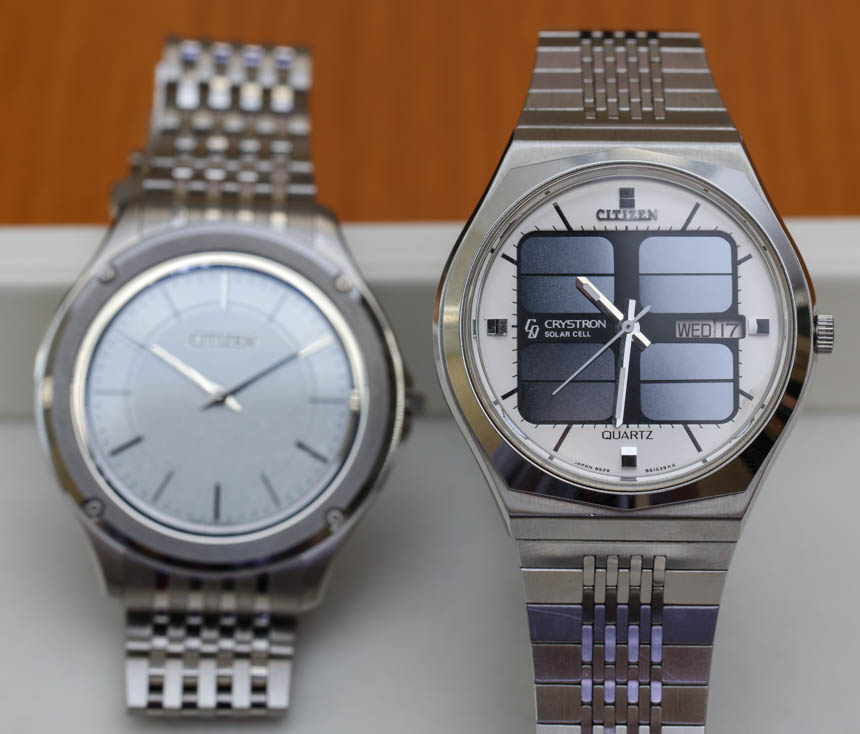 The Citizen Eco-Drive One introduced 40 years after Citizen’s original light-powered watch, the Crystron, introduced in 1976.

So this all brings me to a wonderful irony which is the core philosophy behind most of the better Japanese quartz watches – and that is the idea that a good timepiece is something you really never need to worry about. When Citizen first came out with the Crystron light-powered timepieces 40 years ago, it was revolutionary because you didn’t need to change a battery. The internal battery could hold a charge for 10 days without being around light, and was considered a game-changer when it came to making timepieces more convenient.

Comfort and convenience seem to be the two guiding principles of Japanese product design. Items should be pleasant to use and fit into people’s lives comfortably, they should be easy to understand and operate, as well as add convenience to their lives. Products that don’t do this simply don’t make sense. 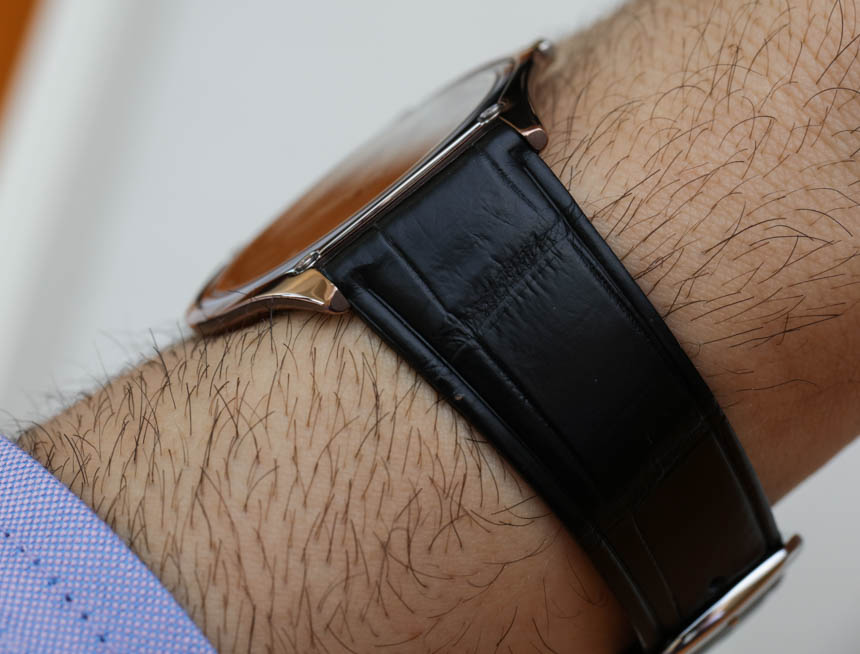 Citizen later coined the “Eco-Drive” name based on the concept that its watches were more ecologically friendly, as well as the fact that they were “naturally powered” by light. “Eco” comes from ecological, while “Drive” has the dual meaning of being a synonym of “movement” as well as combining with eco- to mean “powered by light.” Most watch lovers – and even lay consumers – are familiar with the Eco-Drive name as well as its functionality. While Citizen has perhaps not taken enough steps to explain the larger breadth of their brand to consumers in modern times, they have done an excellent job of sharing the Eco-Drive message with a disparate range of consumers around the world.

I myself owned at least five Eco-Drive watches by the time I sat down with Citizen to experience their latest triumph over size with the Citizen Eco-Drive One. You might consider the timing of the product’s release to coincide with the larger “ultra-thin” trend in the watch industry overall, or perhaps you simply appreciate the various milestones in the history of Eco-Drive, as Citizen has been able to increase the functionality and performance of Eco-Drive watches over time. 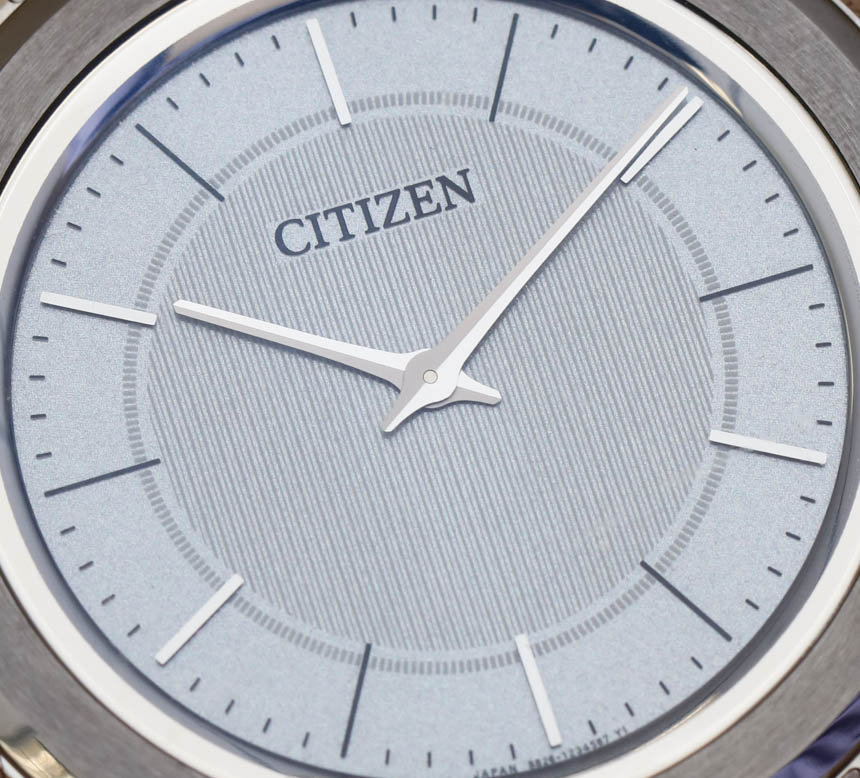 What I really want to do at this point is discuss more about how Citizen makes Eco-Drive watch dials, but I will save that for another article. If you compare the original Citizen Crystron with any modern Eco-Drive watch, you’ll notice (of course) that there are no visible photovoltaic cells on the dial. For consumers, the real trick to Eco-Drive watches aside from the freedom of having to change batteries is the fact that it isn’t obvious that the movements are powered by light. Citizen’s secret sauce – and something that, in my opinion, they do much better than competitors Seiko or Casio who have their own light-powered watches – is that Eco-Drive watch dials aren’t obviously meant to have light pass through them. Citizen has been playing with techniques for creating interesting Eco-Drive dials for years, and unfortunately, most of the technology they use to create Eco-Drive dials was not something we could take pictures of.

This leads me back to the Citizen Eco-Drive One because it is important to remember that Eco-Drive watches consist of a few important layers in addition to the case. The first layer is the dial, which is followed by the photovoltaic (solar panel) layer, followed by the movement components which are an integrated circuit (IC) controller, a quartz regulator, rechargeable batters, and one or more step motors to control the hands. Like the traditional mechanical watch industry, the major challenge over the years has been to miniaturize these components while at the same time maximizing performance. 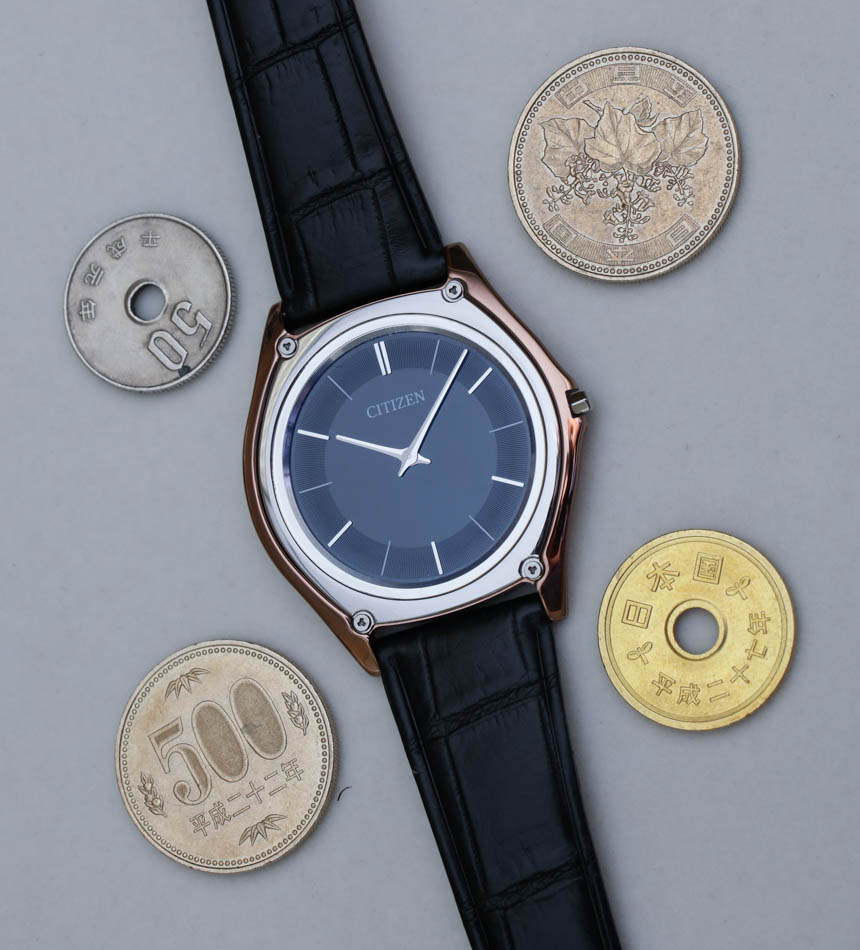 The tiny battery inside of the Citizen Eco-Drive One’s one-millimeter-thick caliber 8826 can power the watch for 100 days without needing to be charged. This is only a little bit less than Citizen’s larger Eco-Drive movements. Mind you, the caliber 8826 only needs to power hour and minute hands, as the movement doesn’t have other functions. Like most standard quartz movements, accuracy is within about 15 seconds per month. Though, Citizen also produces higher-performance Eco-Drive movements that are accurate to within five seconds per year. With that said, most or all of those latter high-performance Eco-Drive watches are not officially sold outside of Japan.

It is true that thin quartz movements are not new – although such thin light-powered ones are. One of the most famous examples of a watch with a thin quartz movement was the Concord Delirium family of timepieces from years back. Even though those slim watches were beautiful, they probably never should have made it to market because their cases tended to bend (and in some instances, rather easily).

Among the less obvious innovations in the Citizen Eco-Drive One is Citizen’s research and development into making a durable ultra-thin timepiece (that doesn’t easily bend). To do this, Citizen relies upon a few materials, and those vary depending on whether or not you are talking about the much pricier limited edition reference AR5014-04E Citizen Eco-Drive One, or the standard collection (for 2016) Citizen Eco-Drive One reference AR5000-50E (black dial), AR5000-68A (silver dial), or AR5004-59 (gray dial with rose-gold-toned bezel) models.