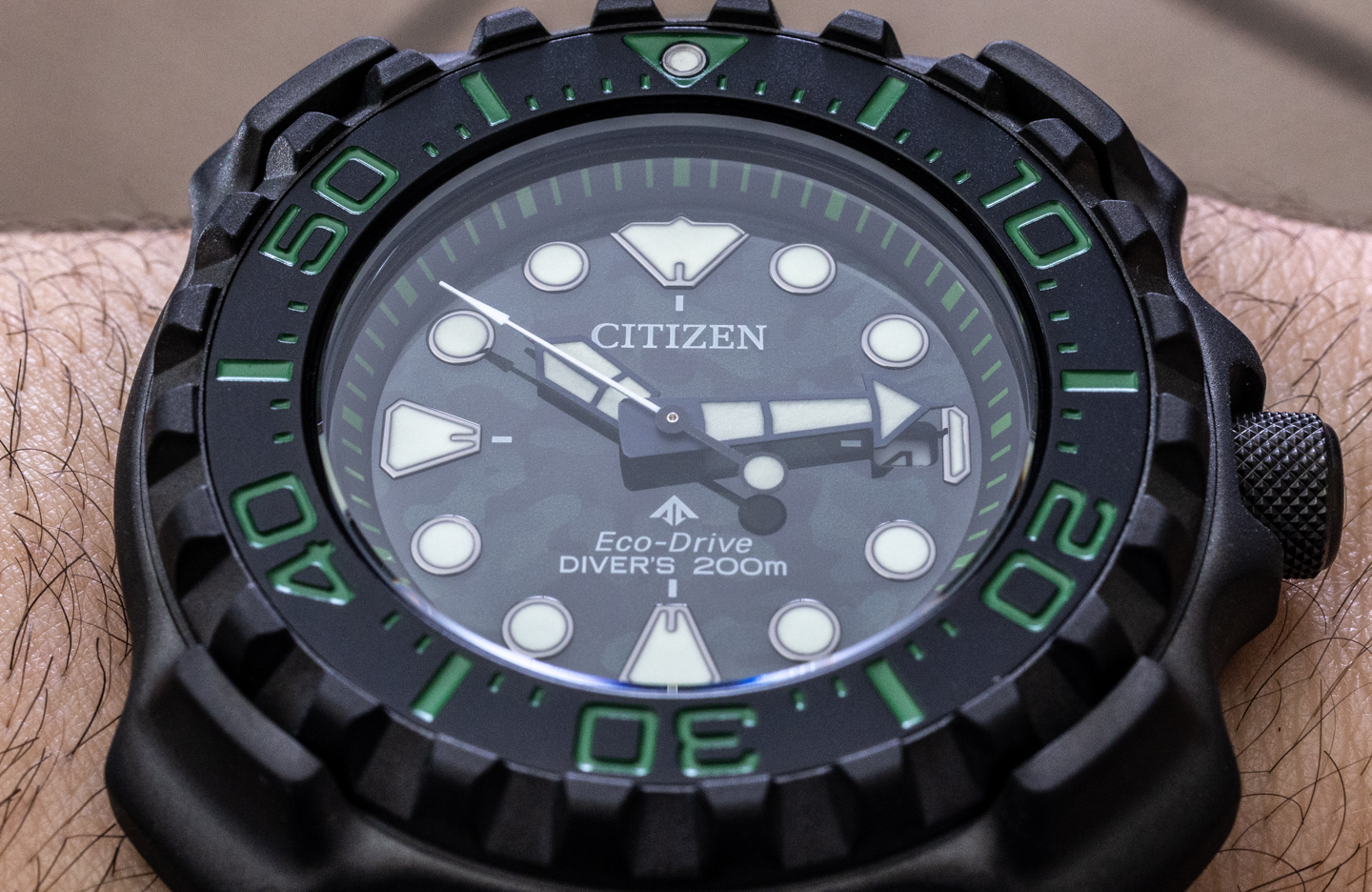 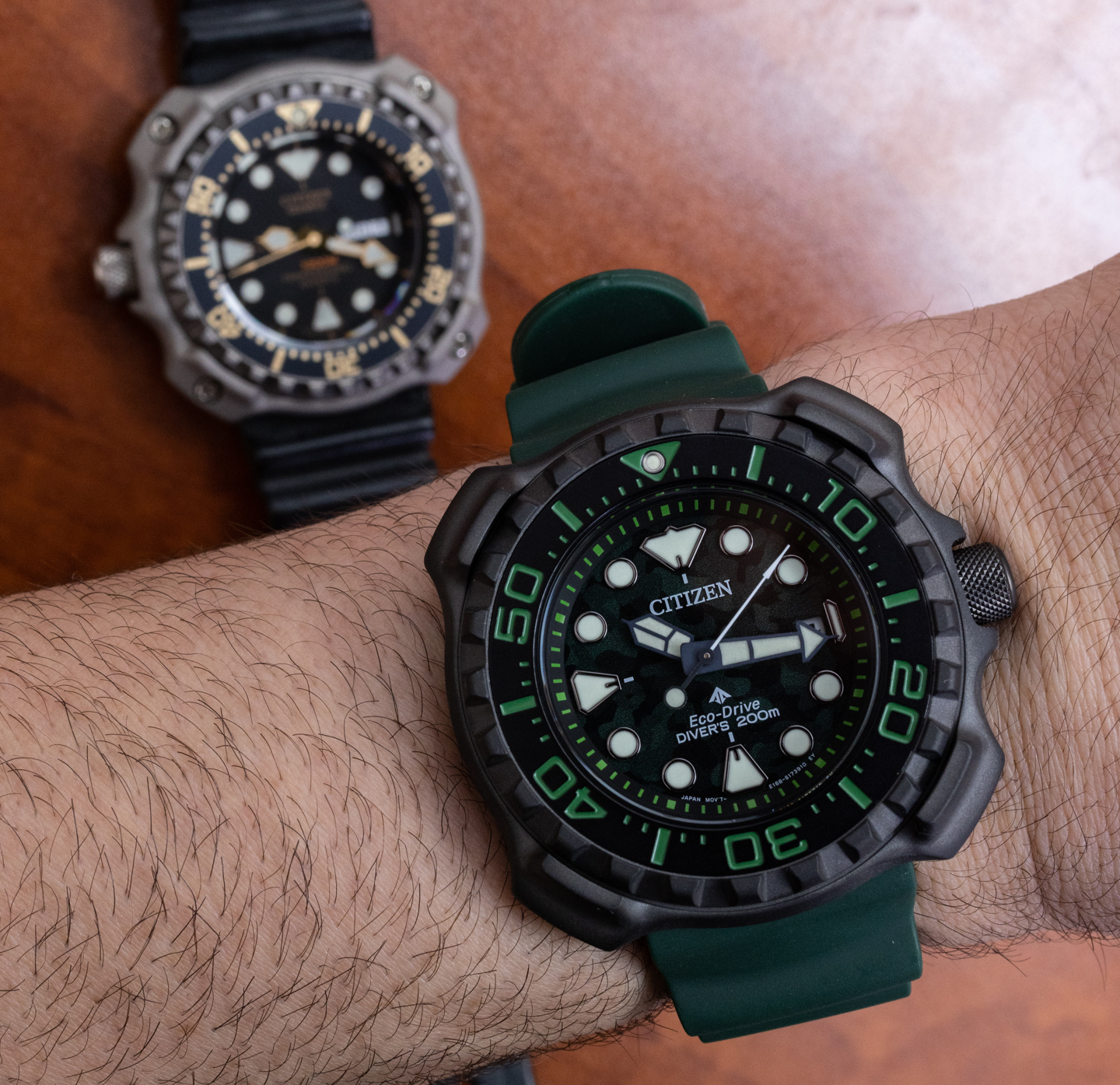 Back in 2021, Citizen introduced another modern watch collection inspired by an important element from its past. This article explores both the original vintage Japanese diver’s watch from 1982, as well as a version of the modern reinterpretation of it that is not only a stellar sports watch today but also faithfully recaptures the spirit of the original. The modern interpretations of the classic professional watch discussed below are known simply as the “Citizen Promaster Eco-Drive Diver 200m.” The three currently available are the references BN0220-16E (most like the original 1982 model), the BN0227-09L (blue and inspired by ocean colors), and the green-accented reference BN0228-06W (seen in these photos). 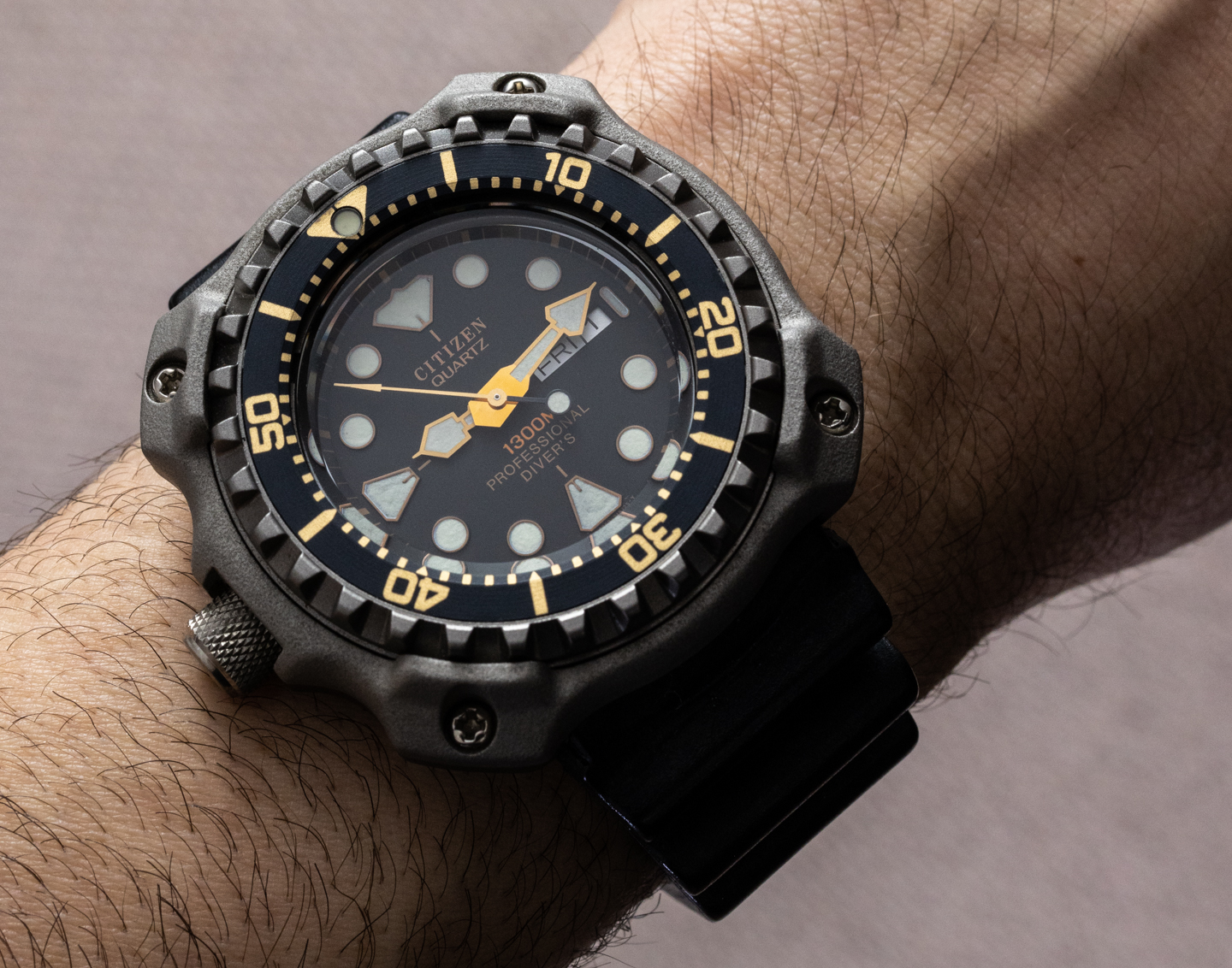 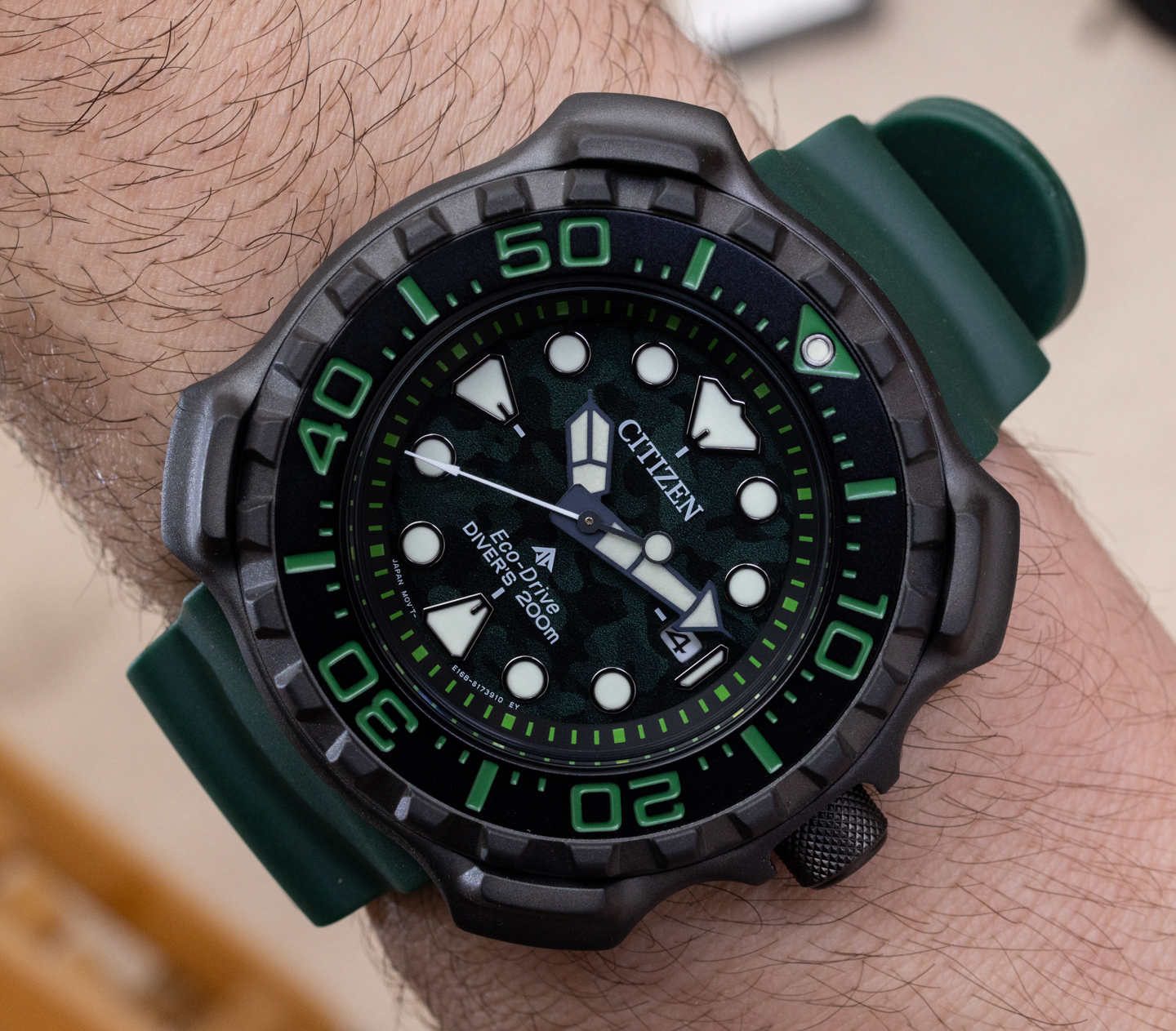 The appeal of the modern BN0228-06W and the other Citizen Promaster Eco-Drive Diver 200m watches is that you get all the benefits of a rock-solid daily-wear dive-style sports timepiece (comfort, legibility, style, durability, versatility), along with a distinctive case design that is utilitarian in aesthetic (perfect for tool-watch lovers). The connection to the early 1980s professional diver’s watch is just the icing on the cake for this truly top-notch budget-friendly Japanese sports watch.

Citizen has limited information about this special watch (that’s not uncommon, as it wasn’t until the 1990s that most watch companies started to keep more detailed records of their products and the development around them). But when it comes to professional-use diver’s watches of the 1980s, the Japanese (Citizen, Casio, Seiko) absolutely dominated in terms of style, value, and innovation. It was in 1982 that Citizen released what was then the deepest-diving watch made in serial production with a water resistance rating of 1,300 meters. While there are diving watches today with a deeper rating, it doesn’t matter much because such depths exceed what the human body can tolerate. Any watches exposed to deeper depths are attached to the outside of submersible vehicles (so, just for fun or testing purposes) that protect the operators in a pressurized environment. At the time, in 1982, when Citizen released a watch with so much water resistance, it was considered a very big deal.

The 1982 Professional Diver 1300m is also Citizen’s first titanium diver’s watch, a material the brand thoroughly invested in through the next decade and continues to invest heavily in today. While most luxury watch brands still use more or less natural (untreated) titanium, Citizen produces “Super Titanium” watches that have base titanium metals applied with a variety of in-house treatments that offer both strength and scratch resistance. There are really no better titanium watches on the market for the money. ABTW visited Citizen in Japan and viewed its state-of-the-art Super Titanium production facilities. 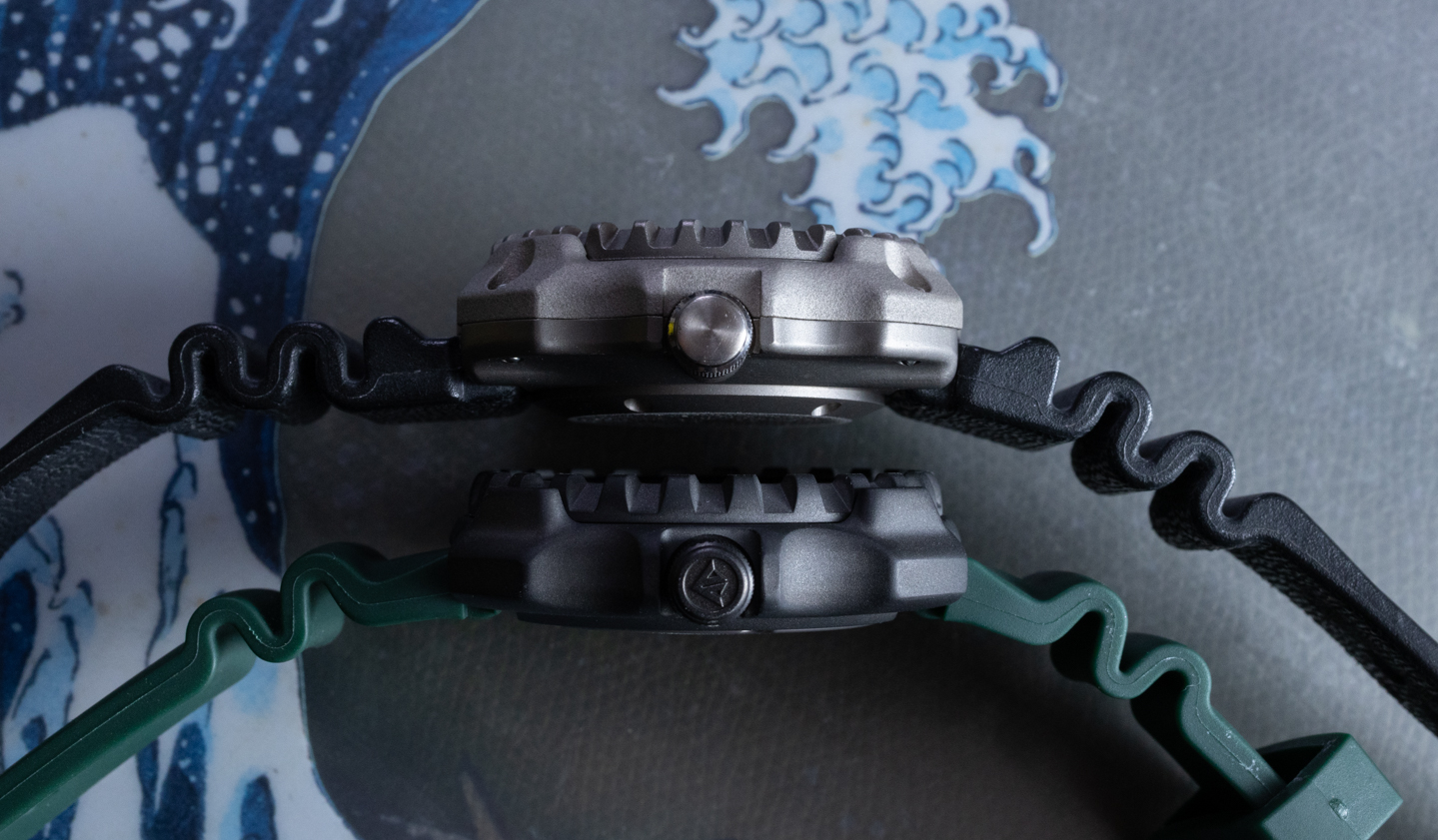 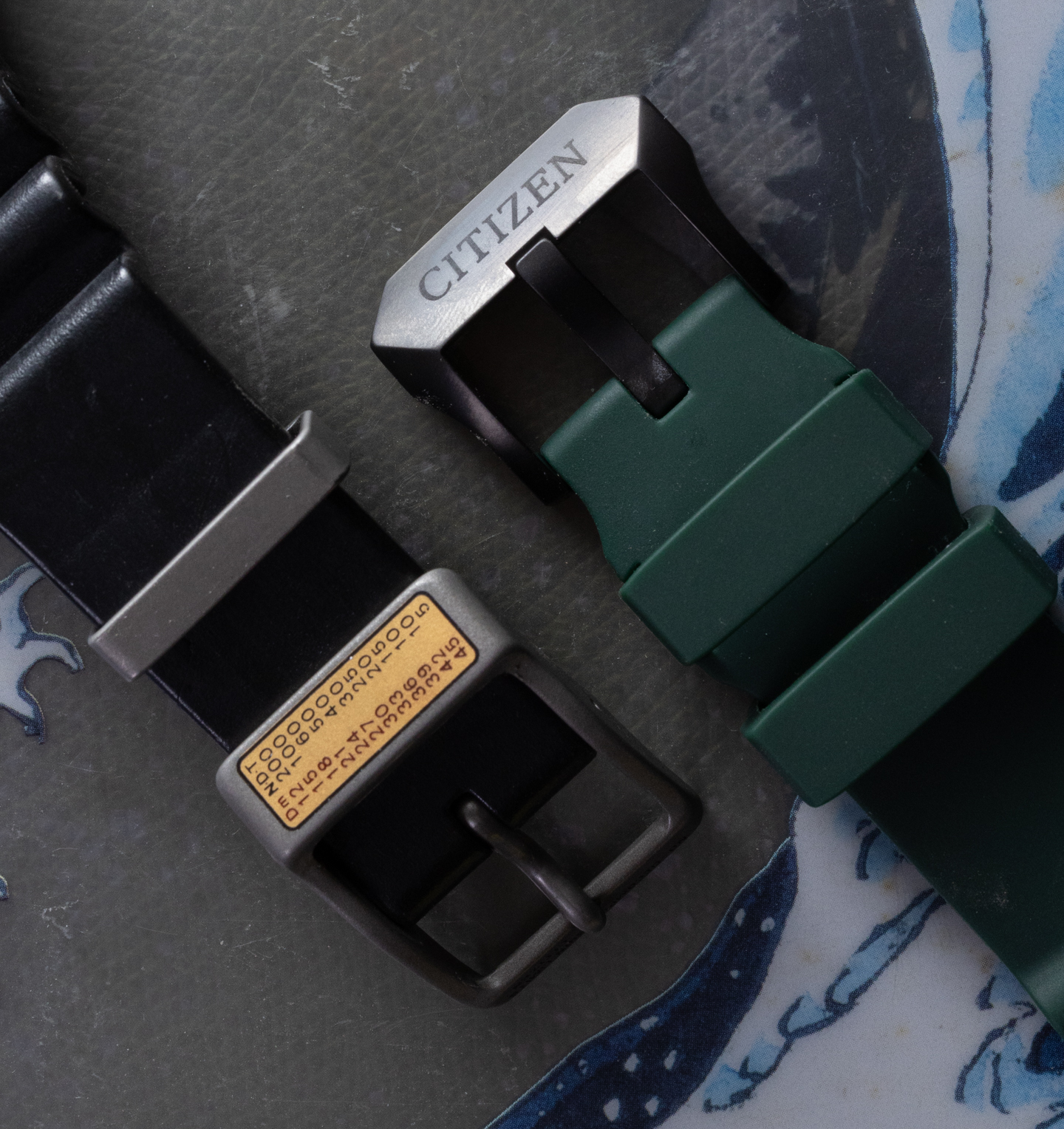 In 1982, Super Titanium didn’t exist, and the lightweight metal was not typically used in timepieces, given its expense. Citizen was at the forefront of making titanium watches available to the general public, but in the early 1980s, titanium was an exotic luxury material in the world of watchmaking. The strange-looking squared case of the 1982 Citizen Professional Diver 1300m is not a style choice as much as it was a practical way to use securing screws to hold the case together to allow for maximum water resistance. In the modern versions of the watch, the retaining screws (as well as 1,100 meters of water resistance) have been engineered out. Citizen still makes select 1000m meter dive watches, but most of its dive watches are aimed at more casual sportswear and recreational diving/swimming purposes. With the special squared case came raised ridges that act like bezel guards. This was important at the time not only to protect the integrity of the uni-directional rotating timing bezel but also to make sure it isn’t too easily adjusted by accident. Prior to the use of diving computers, a professional diver’s wristwatch was crucial for a variety of calculations and timing intervals, including how much oxygen one has remaining, as well as ascent time intervals to avoid the accumulation of nitrogen in the blood, a dangerous situation.

Another difference in the original vintage 1300m diver is the placement of the crown. Originally, Citizen placed it on the left side of the case in order to protect it from jabbing into your wrist or being damaged. The modern versions move the crown back to its non-standard position on the right side of the case. 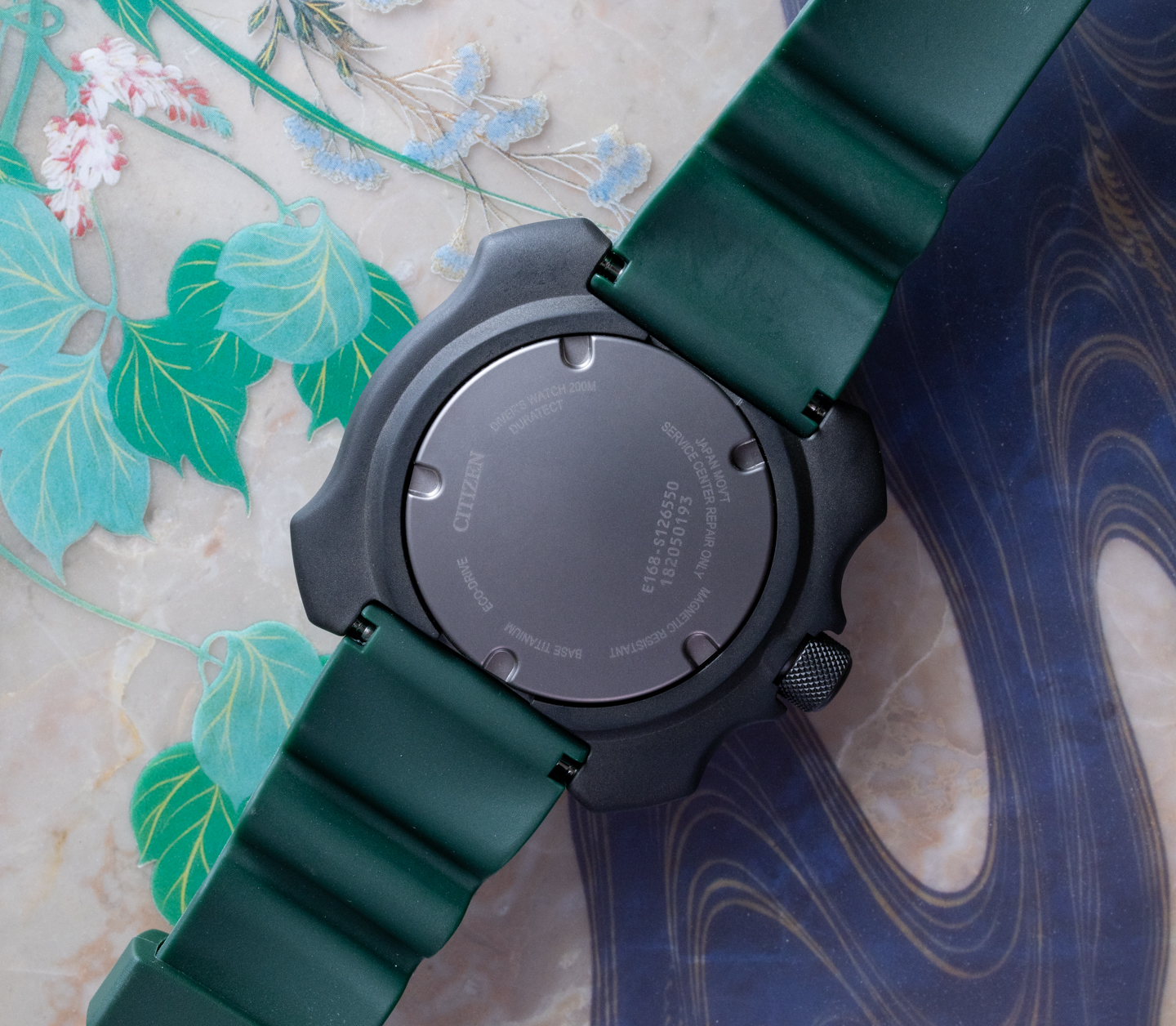 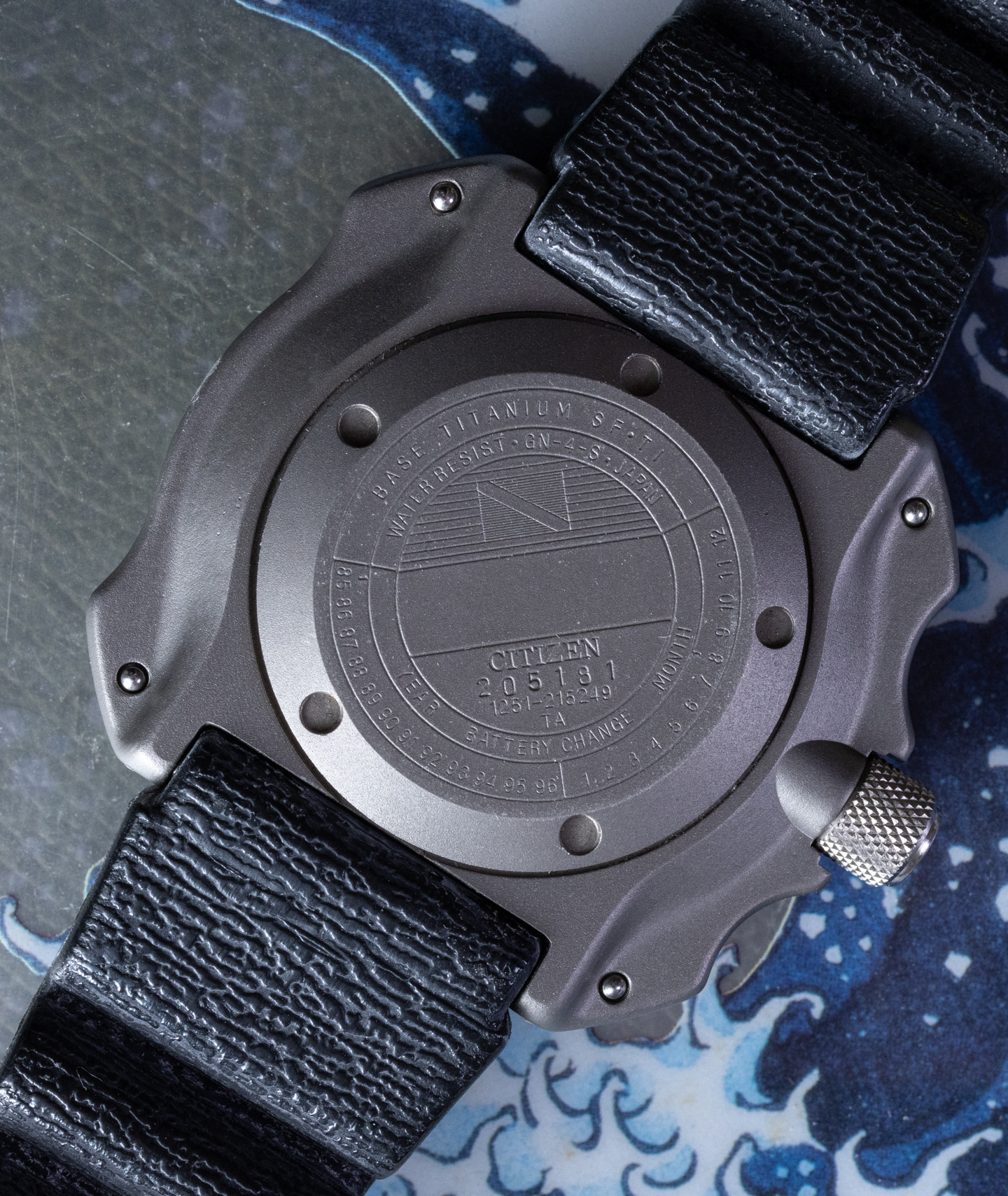 The relatively short lug-to-lug distance of the lugless squarish case is just under 46mm-wide and about the same length, whcih ensures that the watch wears well on a wide range of wrist sizes. Citizen did an admirable job of emulating the overall look of the original Diver 1300m watch. This iconic Japanese look from 40 years ago still feels very high-tech and modern even by today’s standards. Japan is only now starting to get more credibility for the timelessness of its vintage sports watches, and this one has major style appeal.

Going back to the Professional Diver 1300m water, it is interesting to see the markings on the case and how they differ from watches today. The caseback has a handy reminder that indicates the recommended timing battery changes. The watch doesn’t need to be opened at all because it contains Citizen’s Eco-Drive family of quartz movements, which have a photovoltaic cell under the dial that turns light into energy for the rechargeable battery. These products can go for 30 years or more without any service needs. 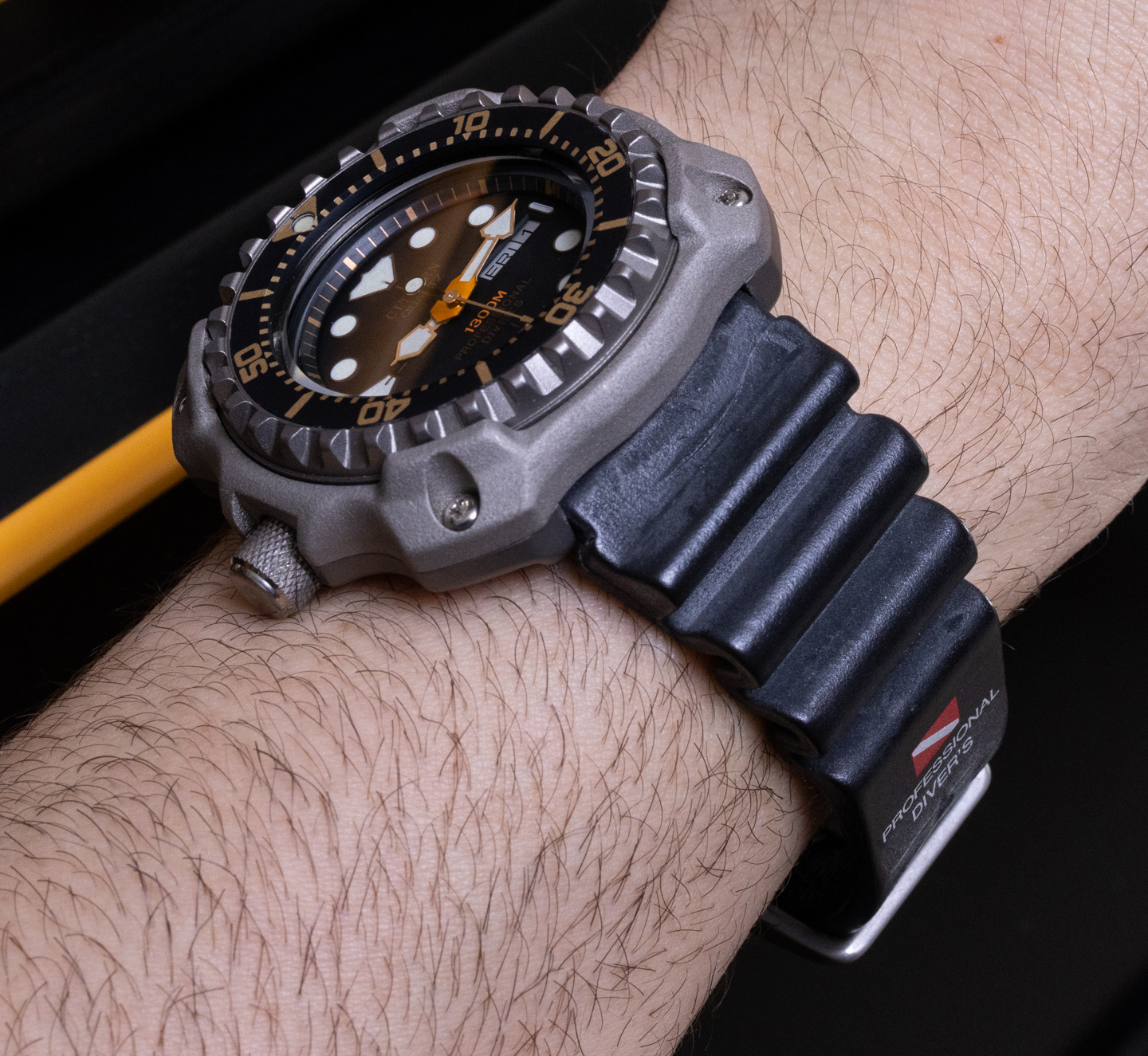 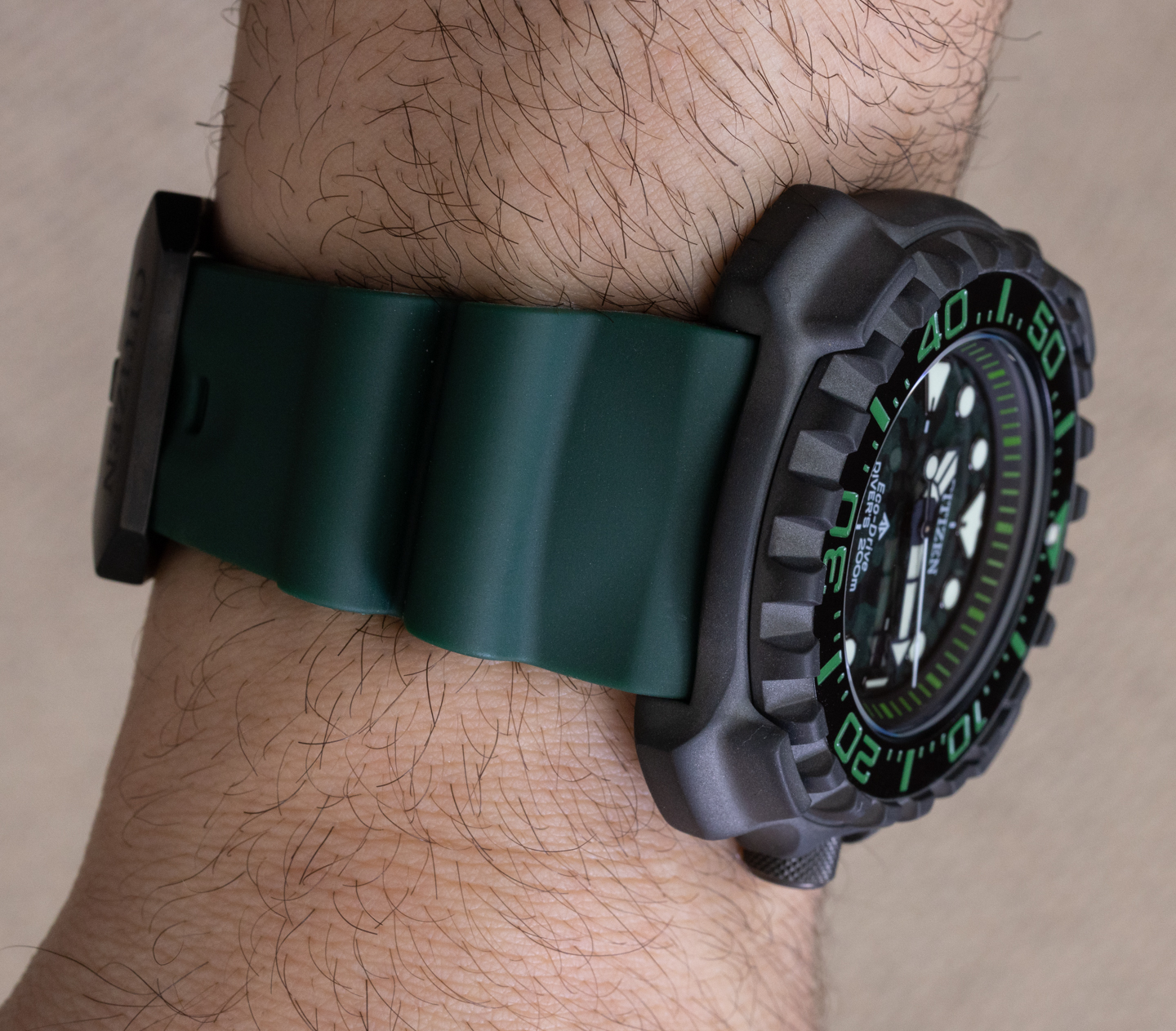 The original Professional Diver 1300m watch proudly claimed “Quartz” in the dial because, at the time, most professional consumers wanted the reliability and accuracy that came with quartz watches over mechanical ones. The original movement also featured a day/date complication movement, while the Citizen Caliber E.168 in the modern Promaster Eco-Drive Diver 200m watches feature only the time and date.

The BN0228-06W watch has a Super Titanium case that has been further treated with DLC. This does offer a bit more scratch resistance but is mainly intended to give the titanium a darker color. The Citizen BN0220-16E would be the version of the Promaster Eco-Drive Diver 200m to get if you want a lighter titanium gray to match the color of the original model. The newer cases are water-resistant to 200 meters and have a mineral (versus sapphire) crystal. Enthusiasts will prefer the latter, but it is important to be mindful of the relatively low retail price of this watch and that upgrading it with too many extras would have increased the cost appreciably.

Citizen judiciously makes use of its long history to inspire today’s watches, but it is rare to see true revivals of vintage greats meant to be as high-end and impressive as the originals. Citizen is no stranger to the higher price points such watches could easily command and might introduce beautiful high-end retro-remake watches to complement its stunning modern high-tech, high-end models such as the Caliber 0100 (the most accurate non-connected wristwatch in the world). 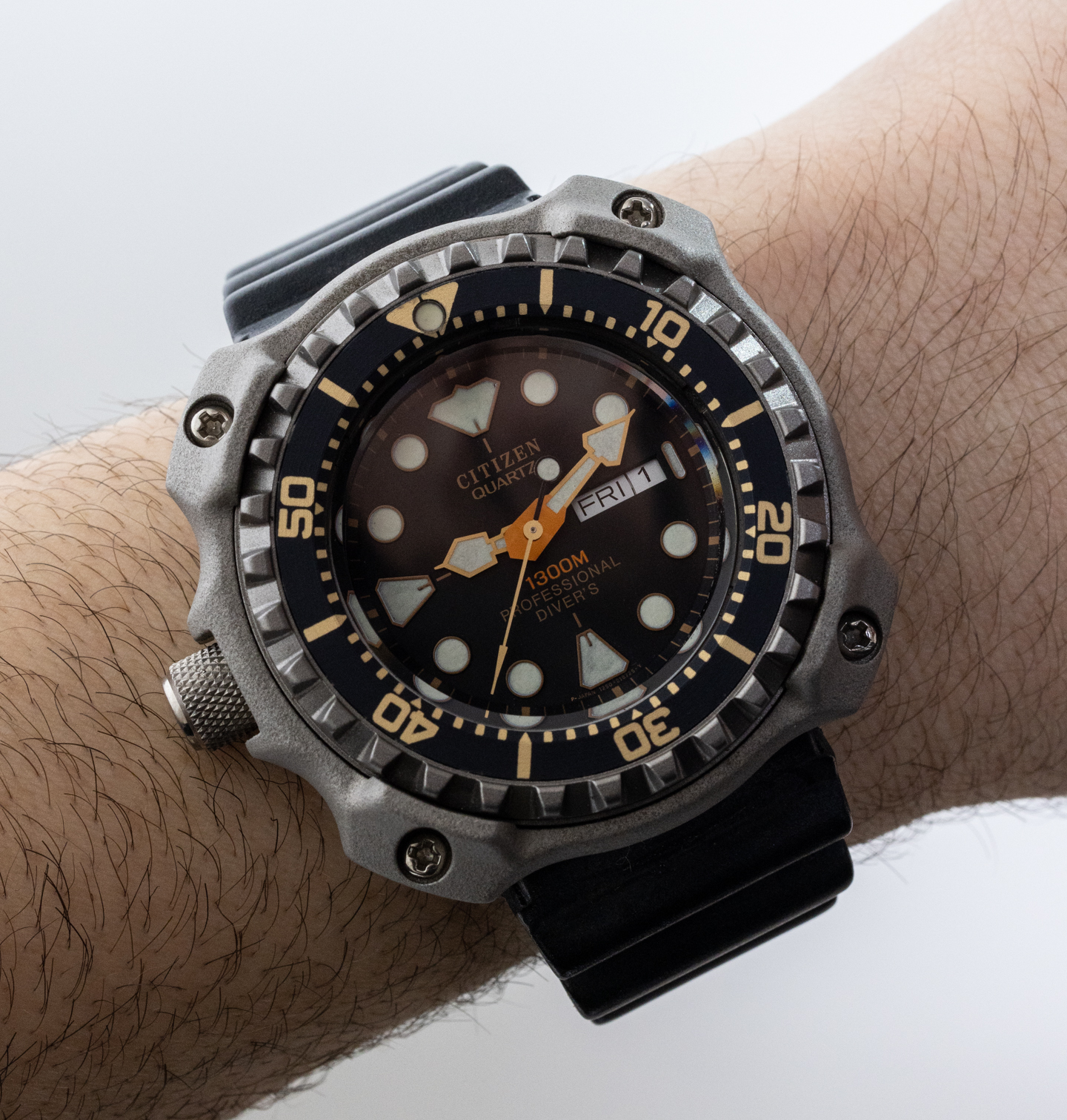 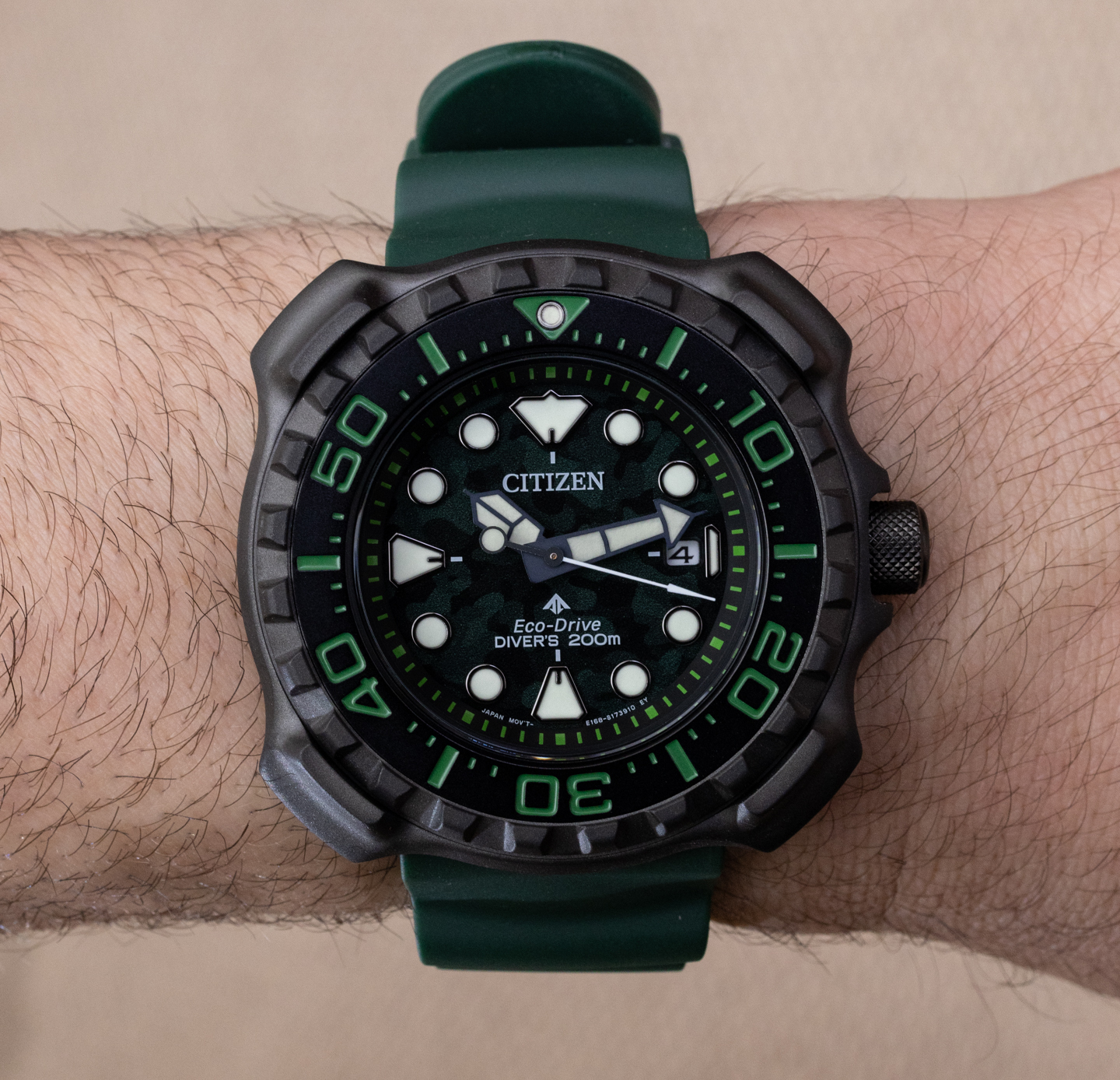 Attached to the case of the Promaster Eco-Drive Diver 200m watches is a diver’s-style urethane strap (here in green), an interesting choice between the more expensive rubber and the less pleasant-feeling silicone.

Very few people will have a chance to own one of the rare 1982 Citizen Professional Diver 1300m watches, but you can opt for one of the modern reinterpretations in the Citizen Promaster Eco-Drive Diver 200m collection. It’s a funky and cool watch that’s practical without being boring, and it has a high value as a statement watch despite a very low retail price. Cost for this reference BN0228-06W and the rest of the Citizen Promaster Eco-Drive Diver 200m watches is $525 USD. Learn more at the Citizen watches website here.