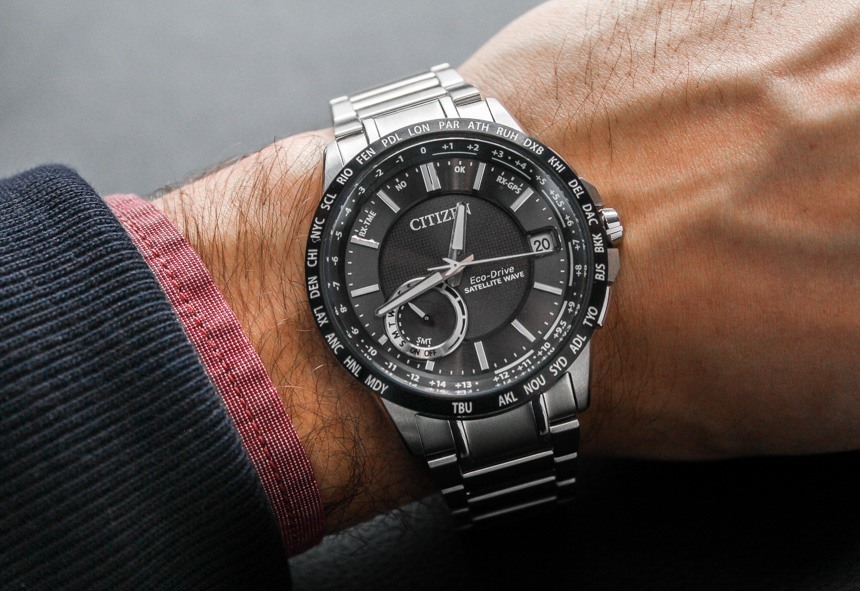 For 2015, Citizen watches continues to push their useful (and cool) GPS-controlled watches that are actually improved this year over the 2014 models. If you recall, I really enjoyed the 2014 Citizen Eco-Drive Satellite Wave F100 watch that I reviewed here. The new-for-2015 Citizen Satellite Wave World Time GPS F150 appears to use a similar movement as the F100 but with a different case and dial – but actually includes an upgraded movement as well. 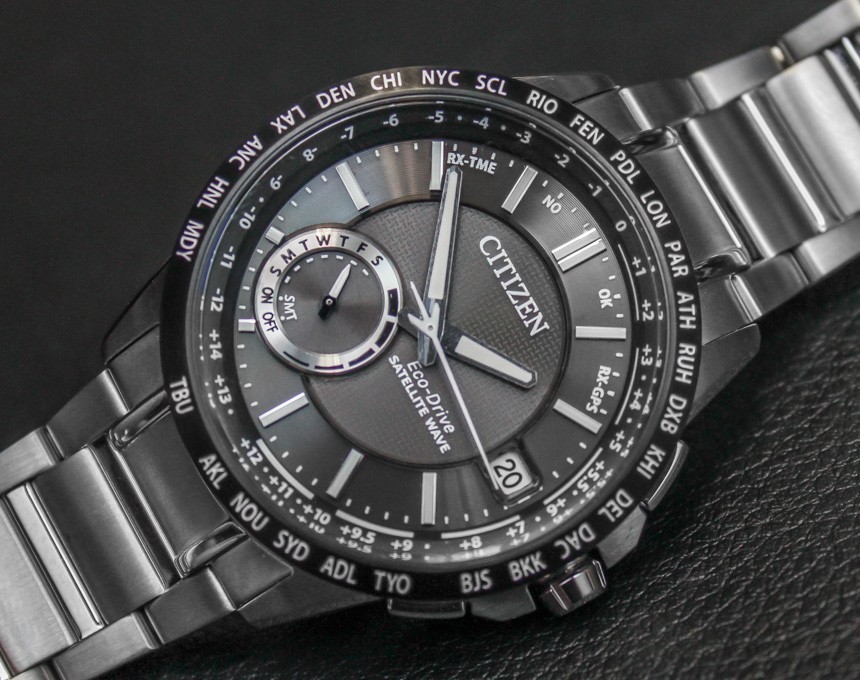 I believe that Citizen has finally been able to include “true GPS functionality” in the Citizen Satellite Wave World Time GPS F150 – something that was sort of missing in the Satellite Wave F100. Let me explain… Before 2015, Citizen used a technology in their “GPS” watches that allowed the movements to receive GPS signals but the watches could not use the signal data to update the location of the watch. The wearer needed to select the time zone, and then the global positioning satellite data would be used to update the time and calendar information.

Competitor watches from Seiko and Casio did offer this functionality, so I knew that Citizen was working on it. Just a year later, they were able to keep the same slim profile and positive performance of their GPS signal-receiving watches and include that final feature which allows the watch to update the timezone, making it a real GPS watch. 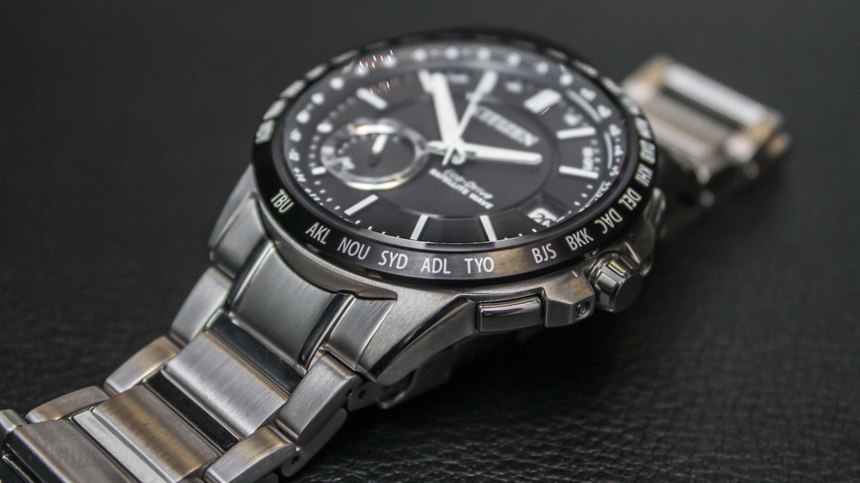 The 2015 Citizen Satellite Wave World Time GPS F150 watch includes the brand’s newest technology which is still among the slimmest in the industry (if not the slimmest GPS watches around now). Some of the key talking points of this Japanese quartz Eco-Drive (meaning that the battery is powered by light) movement are that with a full battery, it can last about two years; that it has a top reception speed of three seconds (that means it often takes only three seconds for the watch to acquire a GPS signal, assuming you are outdoors and there is good reception); and that it has “worldwide reception area.” 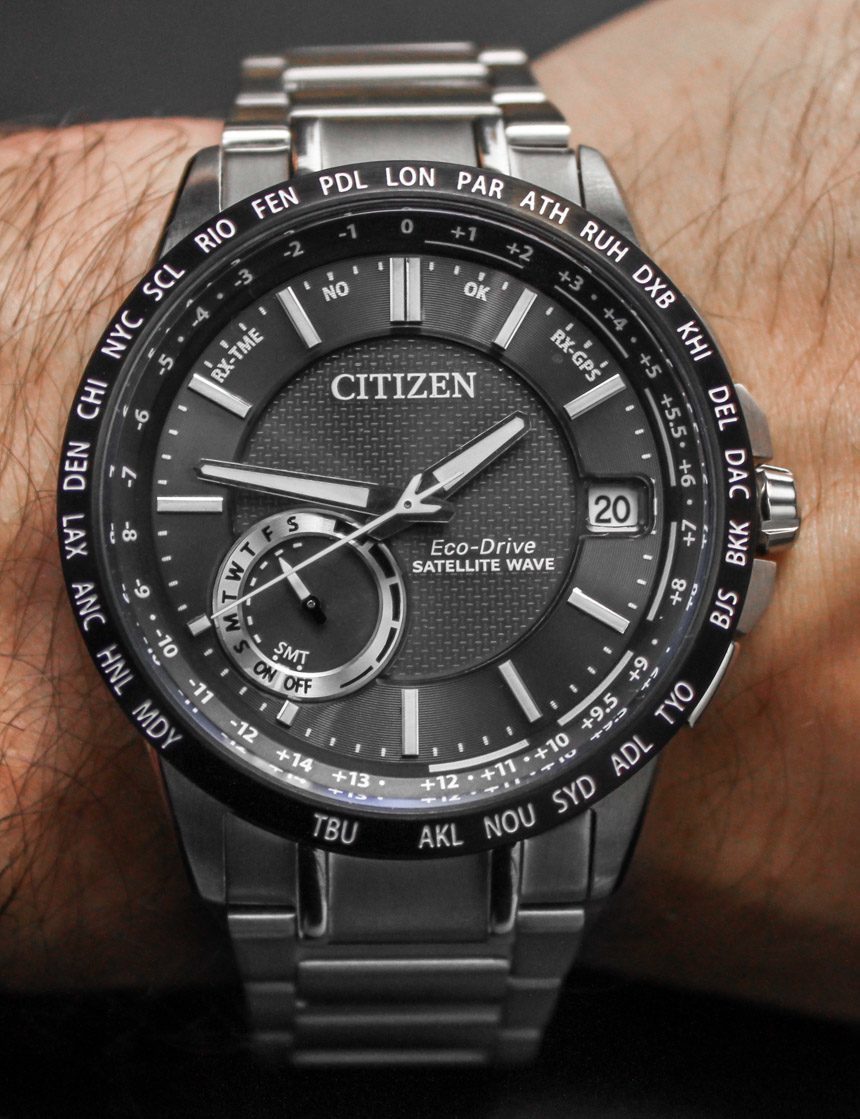 Other features of the GPS signal-receiving movement are that it features the time and date on the dial, along with a day of the week indicator (it is actually a perpetual calendar). There is both a signal strength indicator and a power reserve indicator for the battery. The watch indicates the world time in up to 40 time zones with 27 reference cities, and there is a daylight savings time indicator on the dial. I am still amazed by how minimalist the dial is despite the watch doing all of that. 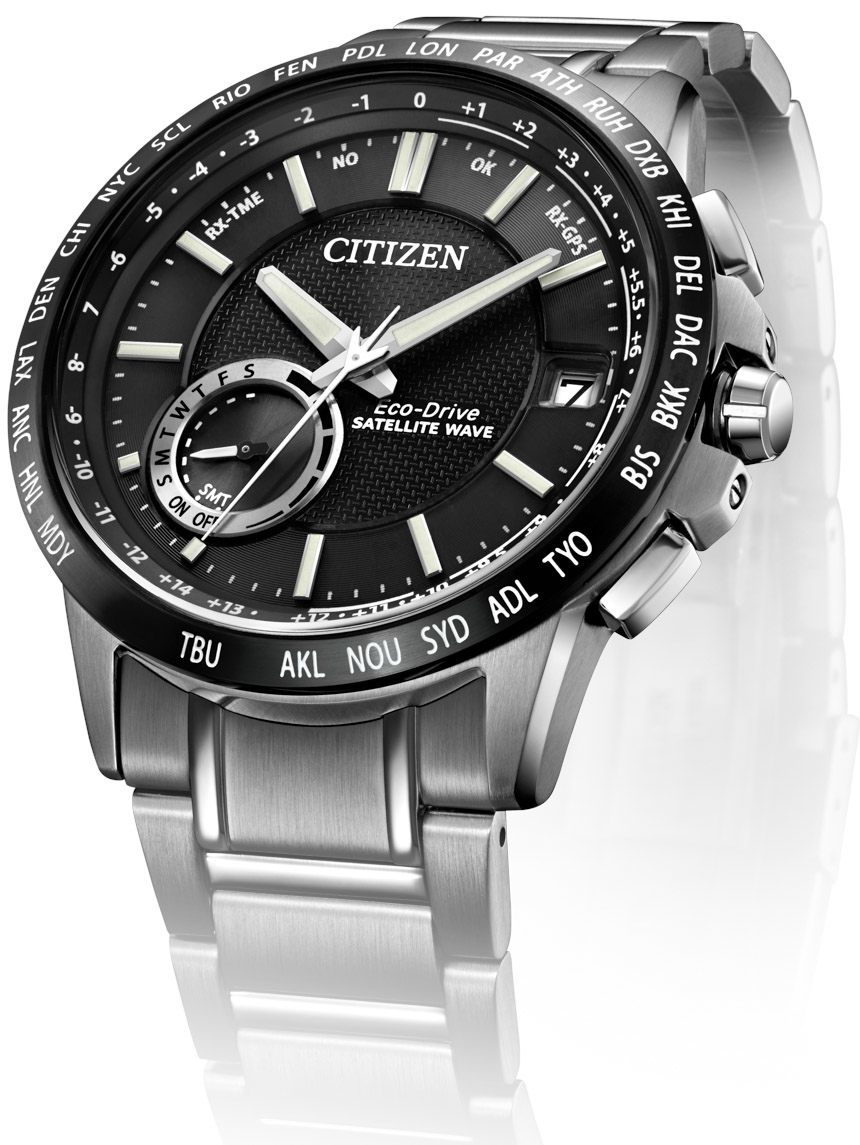 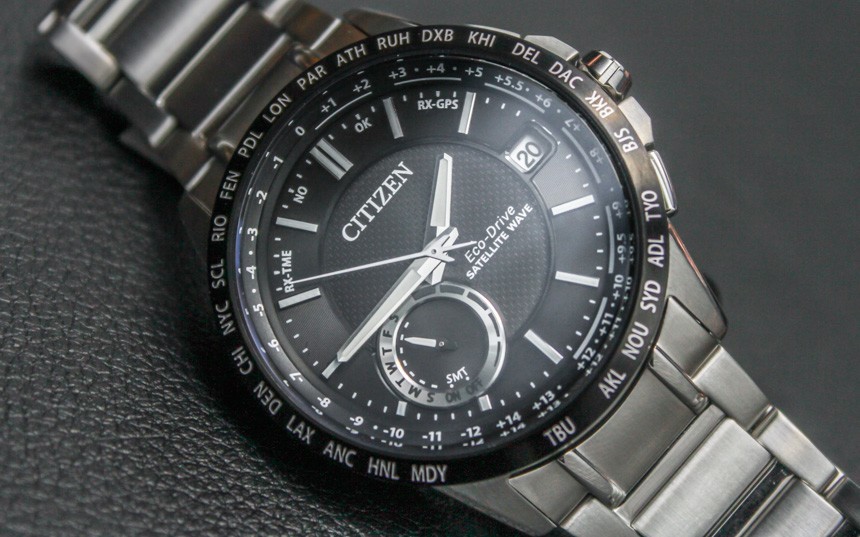 Also for 2015, we have the Citizen Eco-Drive Satellite Wave F900 watch that is also GPS-controlled but has a chronograph in addition. This builds on the design language of the F100, which I personally prefer, with its angular lines and titanium construction. With that said, the unique design of the F900 prevents it from being as “mainstream” as I think Citizen would prefer. 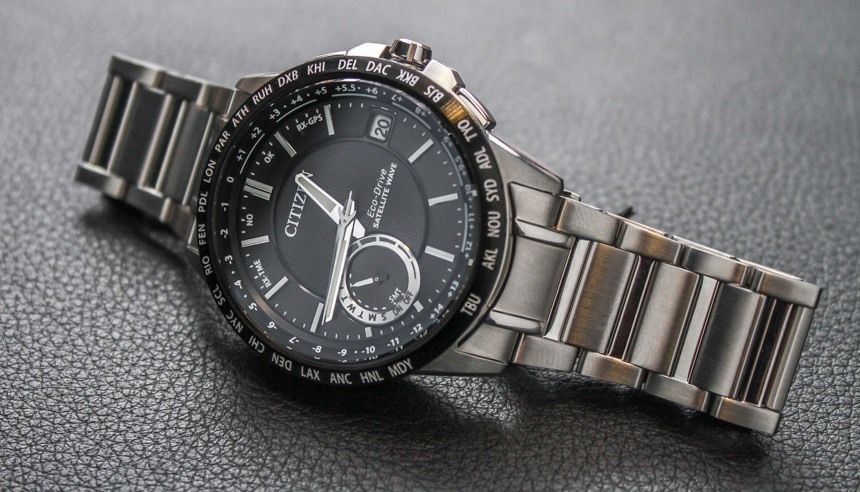 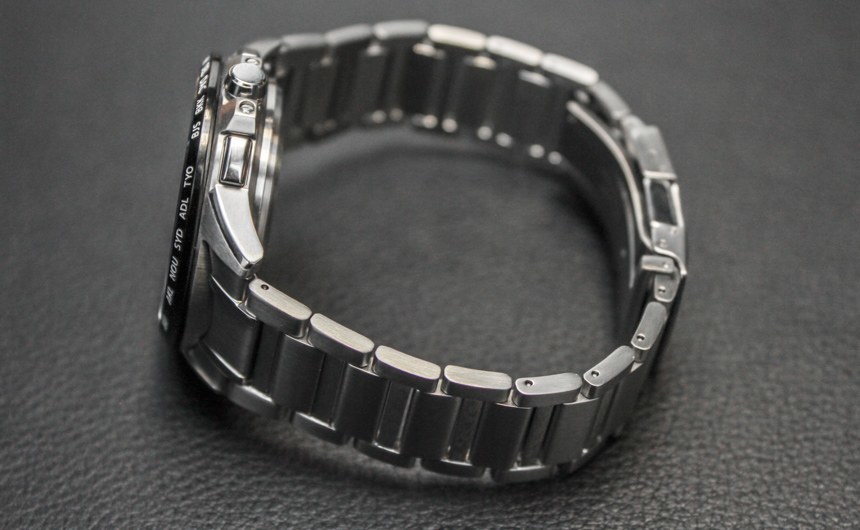 Enter the Citizen Eco-Drive Satellite Wave World Time GPS F150 watch that offers a more traditional watch given what people have come to expect from Citizen as a watchmaker. The case is in steel (with IP black-coated elements) and 44mm wide. Yes, the Citizen Satellite Wave World Time GPS F150 is more conservative in its style than all the previous Citizen GPS watches, but that is what I think the collection needed in order to appeal to mass market consumer and not those looking for unique designs. Offering cool technology in a conservative product is important for brands like Citizen who sell at the volumes they do. In fact, I am just really happy that watches like the Satellite Wave F100 and F900 are around. 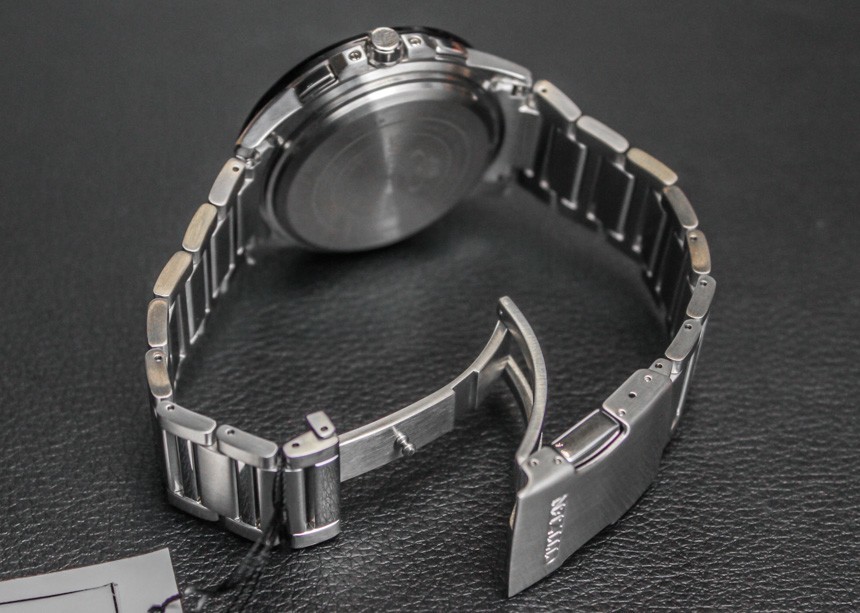 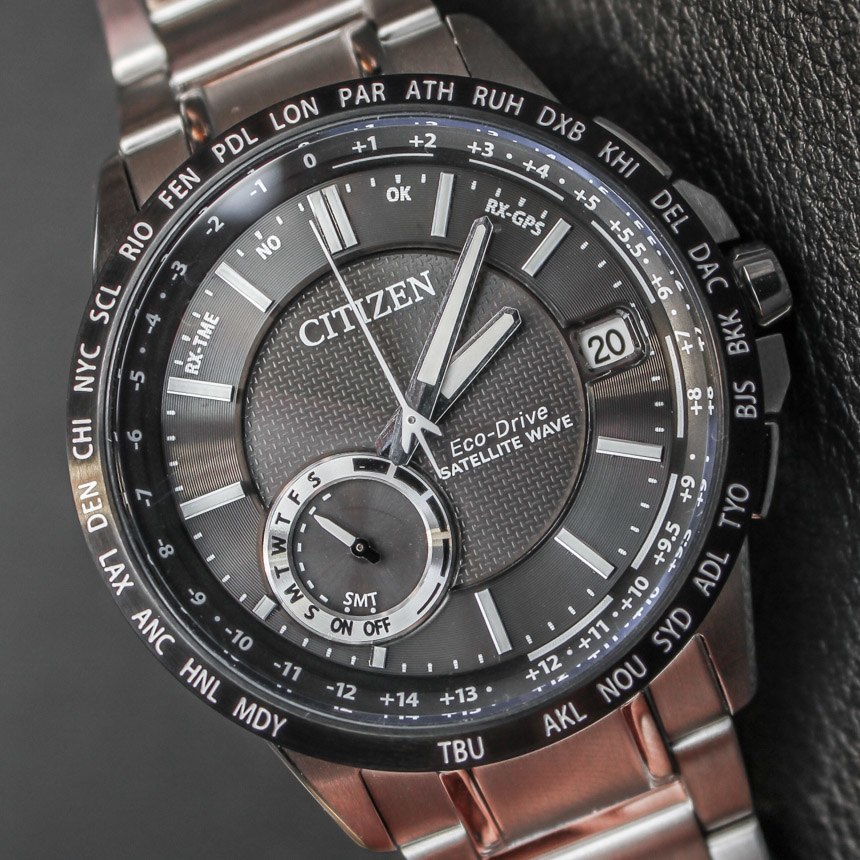 For Citizen, watches like the Citizen Satellite Wave World Time GPS F150 are about making technologies like GPS-controlled watch movements more accessible. Whereas GPS watches began as rather exotic times, they will more than likely replace the vast array of atomic clock-controlled watches out there. More so, a timepiece like this will always have a leg up on smartwatches (at least for the time being) for being self-sustaining as well as relatively autonomous. Assuming your Citizen Eco-Drive watch gets enough light, you’ll never need to mess with the battery and it is designed to automatically update itself all the time.

Available soon (or even now), this reference CC3005-85E Citizen Satellite Wave World Time GPS F150 fits nicely as a more mainstream version of the F100 with a welcome technological upgrade and a retail price of $1,150. citizenwatch.com