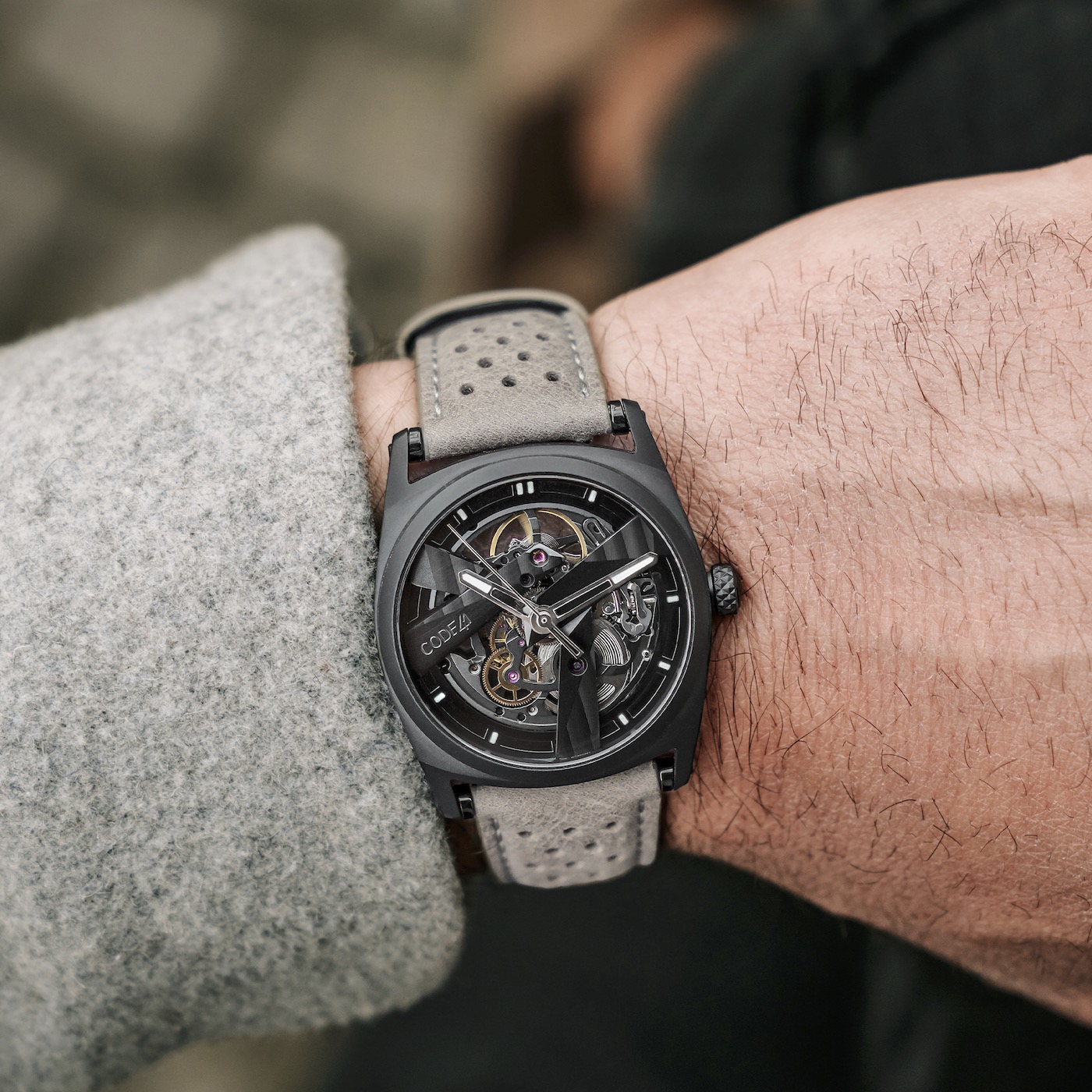 CODE41 Launches The DAY41 Edition 2, A Unisex Watch In Two Sizes And A Range of Colors 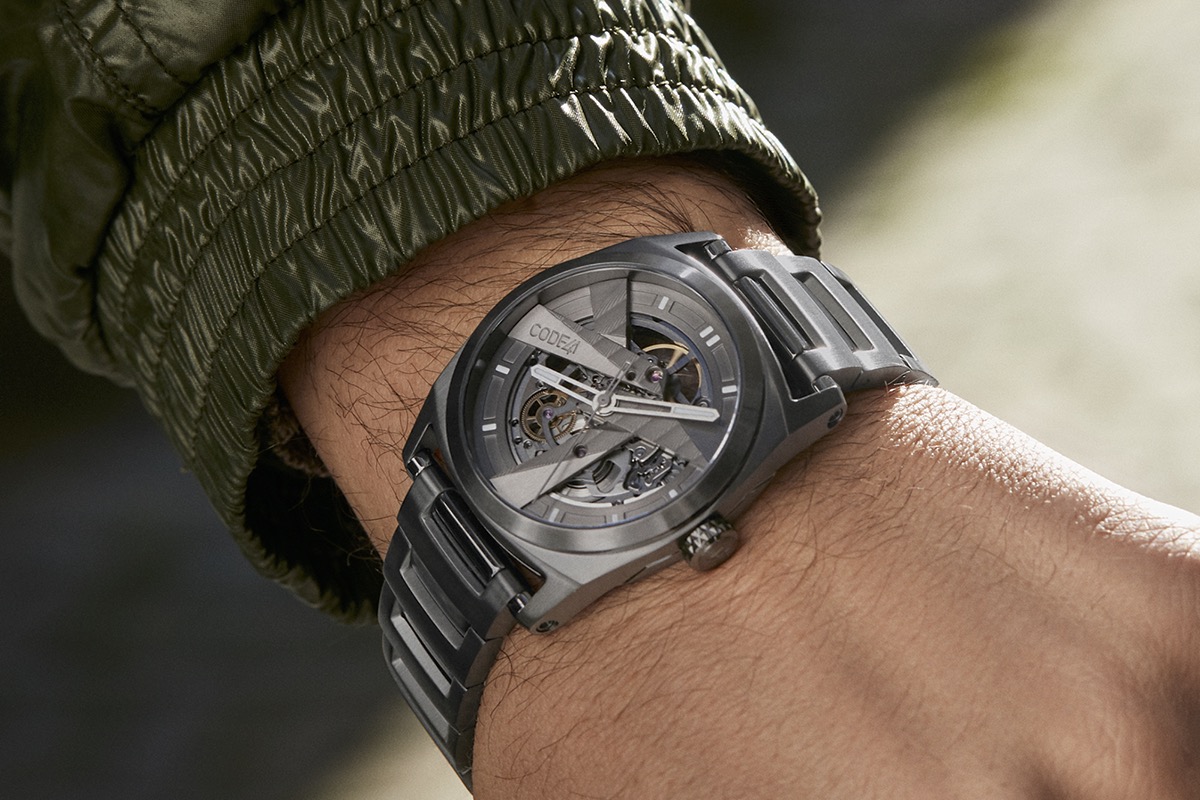 Since its inception, transparency has been at the core of CODE41’s brand philosophy — an ethos that extends well beyond its practice of openly reporting the costs and origins of each watch component. As a community-driven brand, all watch designs and offerings are created in open collaboration with a community of owners and enthusiasts, responding directly to the needs of the watch community. The DAY41 project began with the concept of creating a women’s watch, but not in the typical fashion of so many women’s watches on the market. In other words, the DAY41 was never going to be just another quartz-powered watch with a pink dial or floral motif.

CODE41 realized that good design transcends gender — an idea reinforced by women within the CODE41 community who resonated with the brand’s industrial design language, which features angular and structural elements that highlight the mechanics of the timepiece. The goal was to maintain CODE41’s avant-garde aesthetic but todo so in a more accessible size with a number of color options. However, it soon became apparent that the new “women’s” watch resonated with the brand’s male audience as much as it did with women. As such, CODE41 decided there was no need for a gender designation and is offering the DAY41 in two sizes (37mm and 40mm) in a range of colorways that will appeal to a wide range of tastes, regardless of gender. 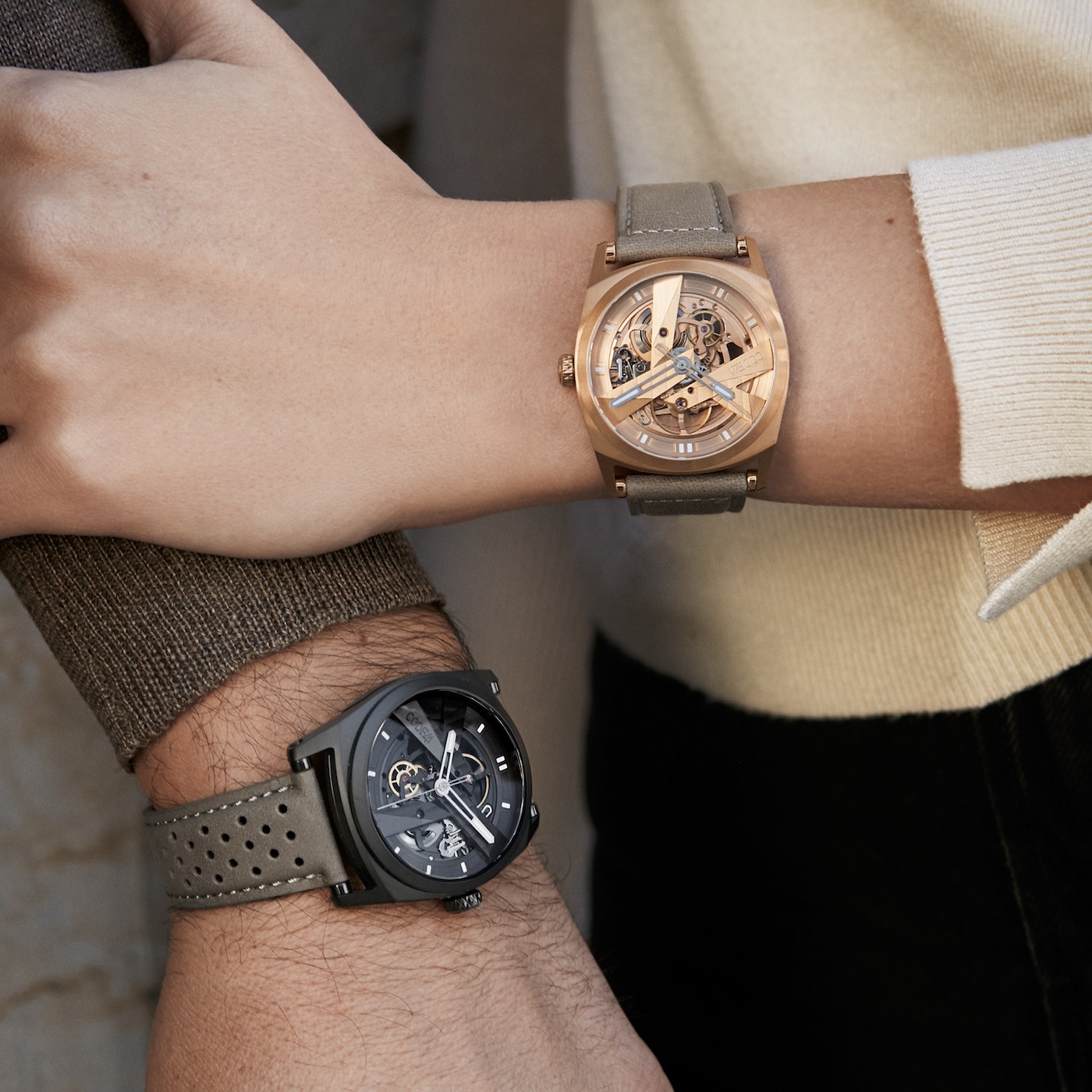 The DAY41 Edition 2 was launched in response to the resounding success of the first edition, in which 1,941 pieces were sold during the pre-order period in early 2020. Orders for the first edition were placed across the globe (35% from France, 25% from Switzerland, 10% from Germany, and 30% from elsewhere around the world), confirming the DAY41’s international appeal. After the release of the first edition, CODE41 has fielded numerous requests for another run. True to the community-driven spirit of the brand, CODE41 listened and the Edition 2 is now a reality. 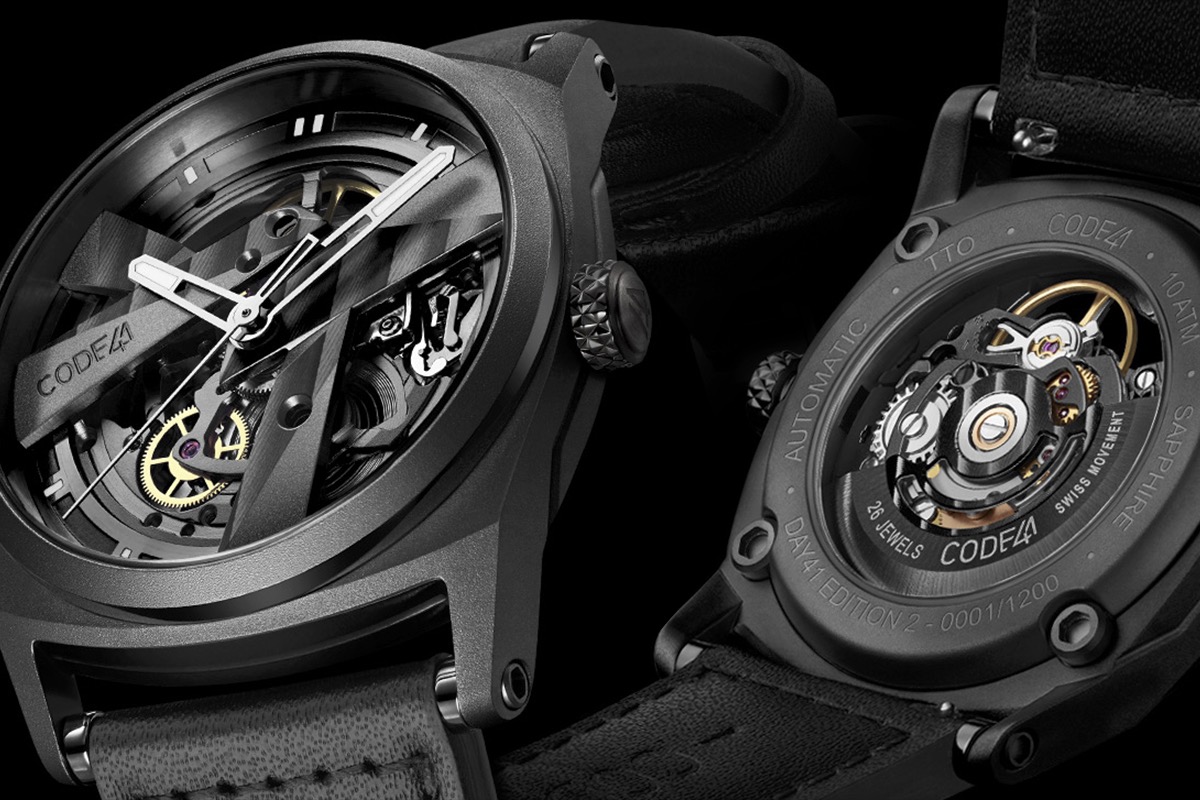 The 37mm model of the DAY41 is crafted of stainless steel and comes in five colorways: rose gold, black, anthracite gray, natural stainless-steel, and stainless steel accented with diamonds. Another three-color option (black, anthracite gray, and natural stainless steel) in the 40mm version round out the collection. The proportions were designed with an eye toward comfort and wearability. Both models have a svelte case height of only 10.5mm, with a 44mm lug-to-lug distance on the 37mm version and a 46mm lug-to-lug distance on the 40mm version. The DAY41 weighs only 60g, or 80g on a leather strap. 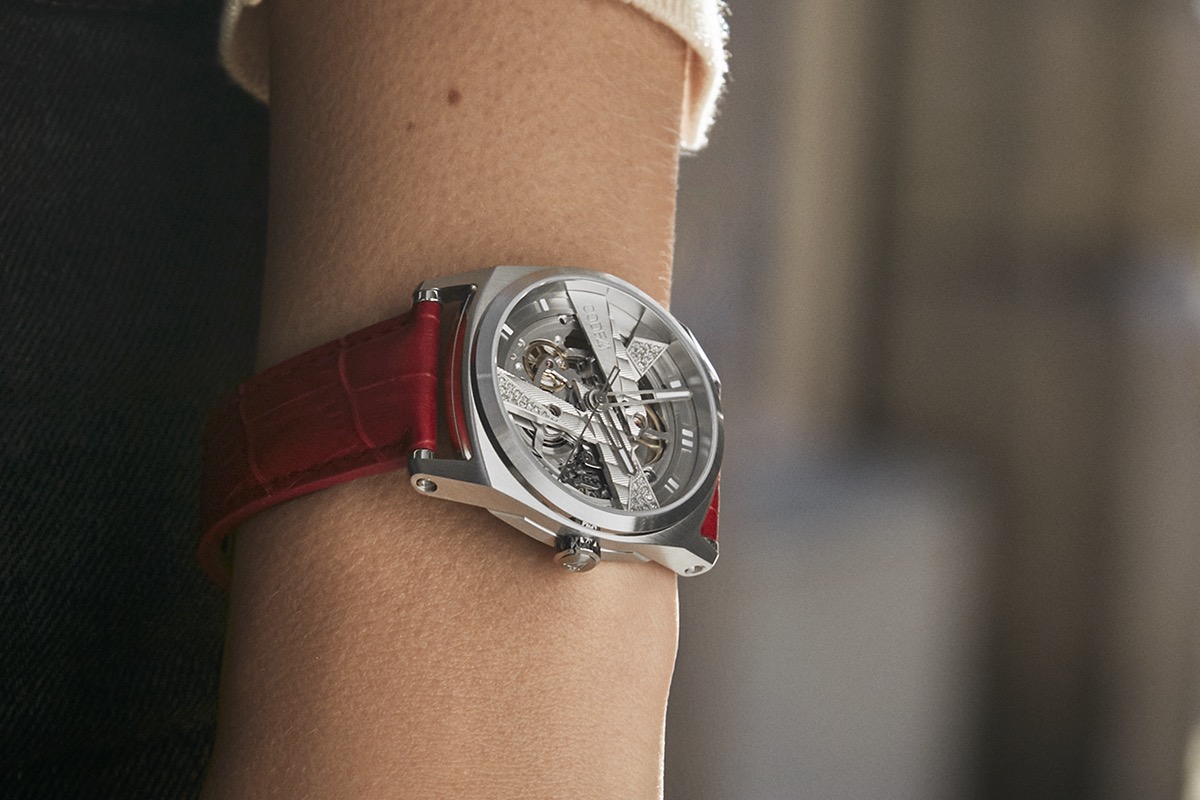 Each watch features a skeletonized dial that highlights the Swiss STP movement powering the DAY41. The broad structural elements of the dial flow with the angular, sweeping lines of the case, resulting in a modern aesthetic that defines the brand. The DAY41 was designed to be worn day-in and day-out, and CODE41 placed a premium on reliability and performance. The case is water-resistant to 100m, features sapphire crystals front and back, as well as anti-reflective coating. In addition, the hands and indices feature ample Super-LumiNova ensuring high nighttime visibility. 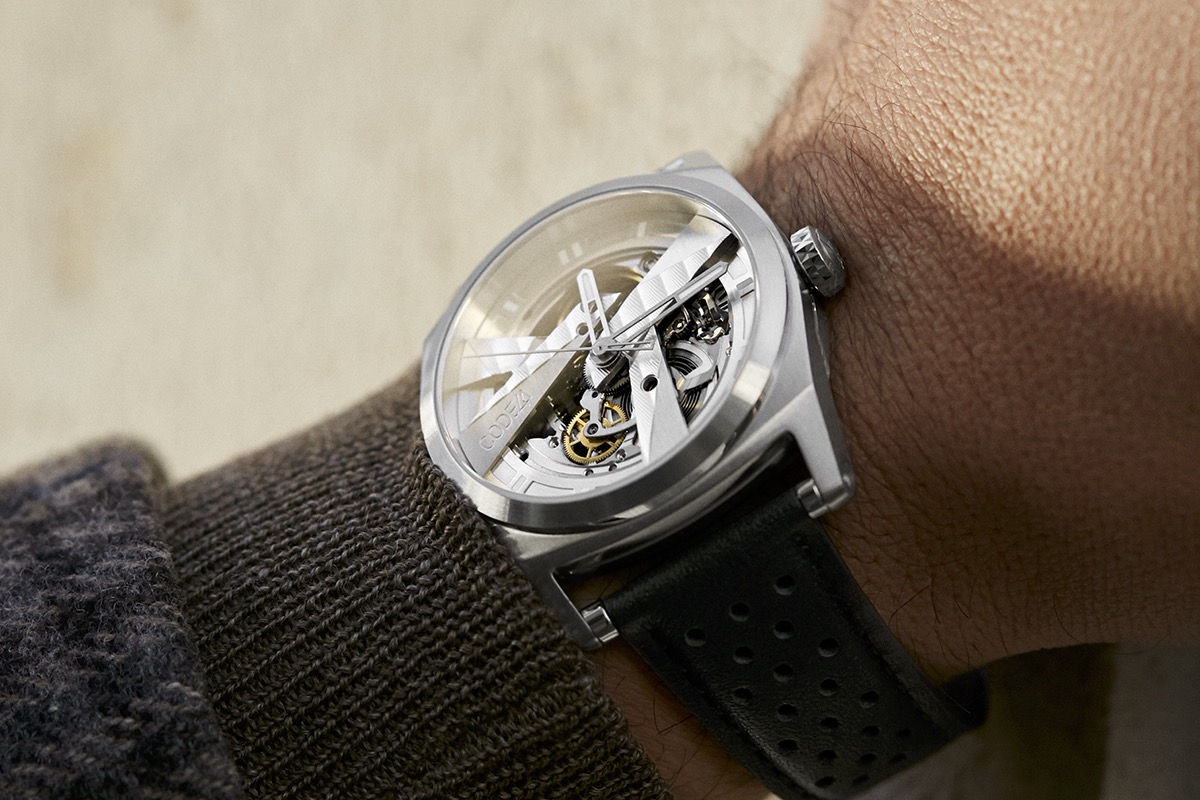 For the DAY41, CODE41 chose to power the watch with an automatic STP6-15 movement. This Swiss movement is produced by Fossil group as a direct challenger to the more commonly seen ETA and Sellita movements and offers a few key benefits, including perlage on even its base movements and a variety of customization options, which allowed CODE41 to integrate the movement directly into the dial design. The movement offers a 44-hour power reserve, beats at 28.8kbph, and is adjusted in five positions, providing a daily rate of -0/+15 seconds. 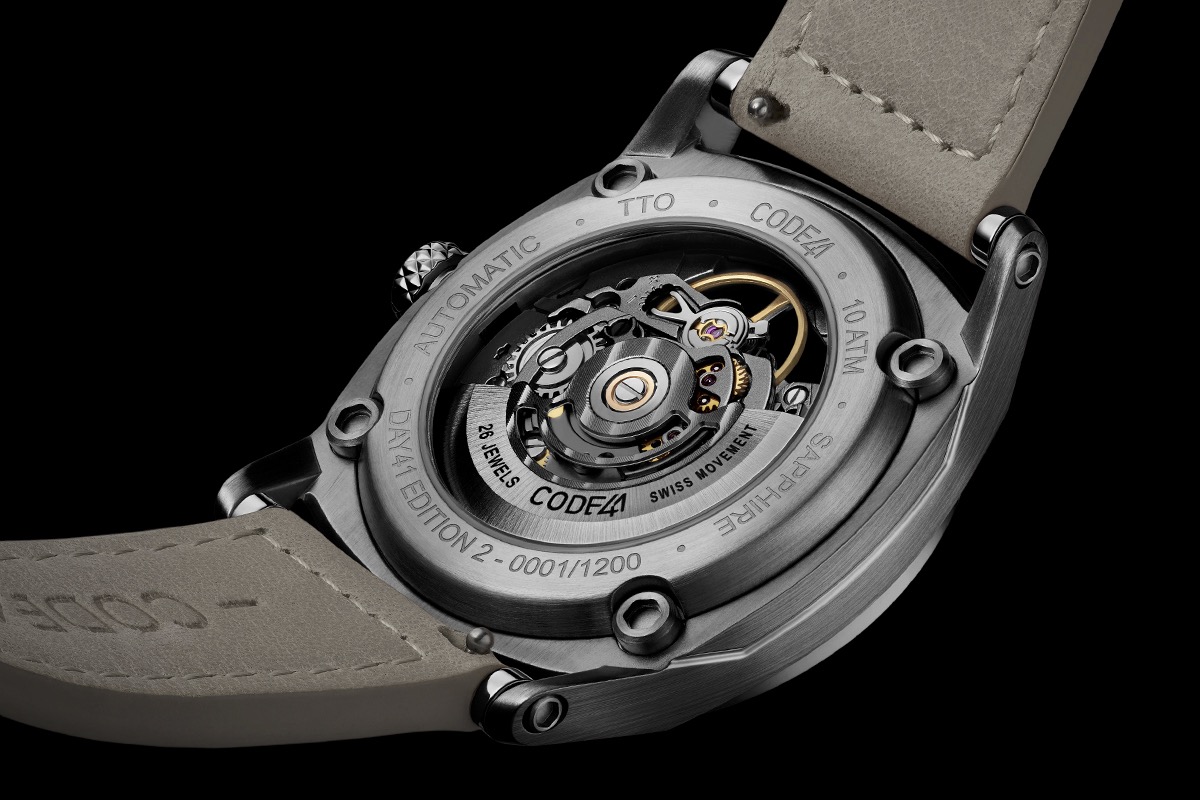 To quickly change the look and feel of the watch, all the DAY41 straps feature a tool-less quick-change system, allowing you to swap between a stainless steel bracelet and a broad selection of leather straps. In addition to metal and leather, CODE41 offers three eco-friendly strap options made from biodegradable leather, flax, and recycled paper. All straps also come outfitted with a deployant clasp. 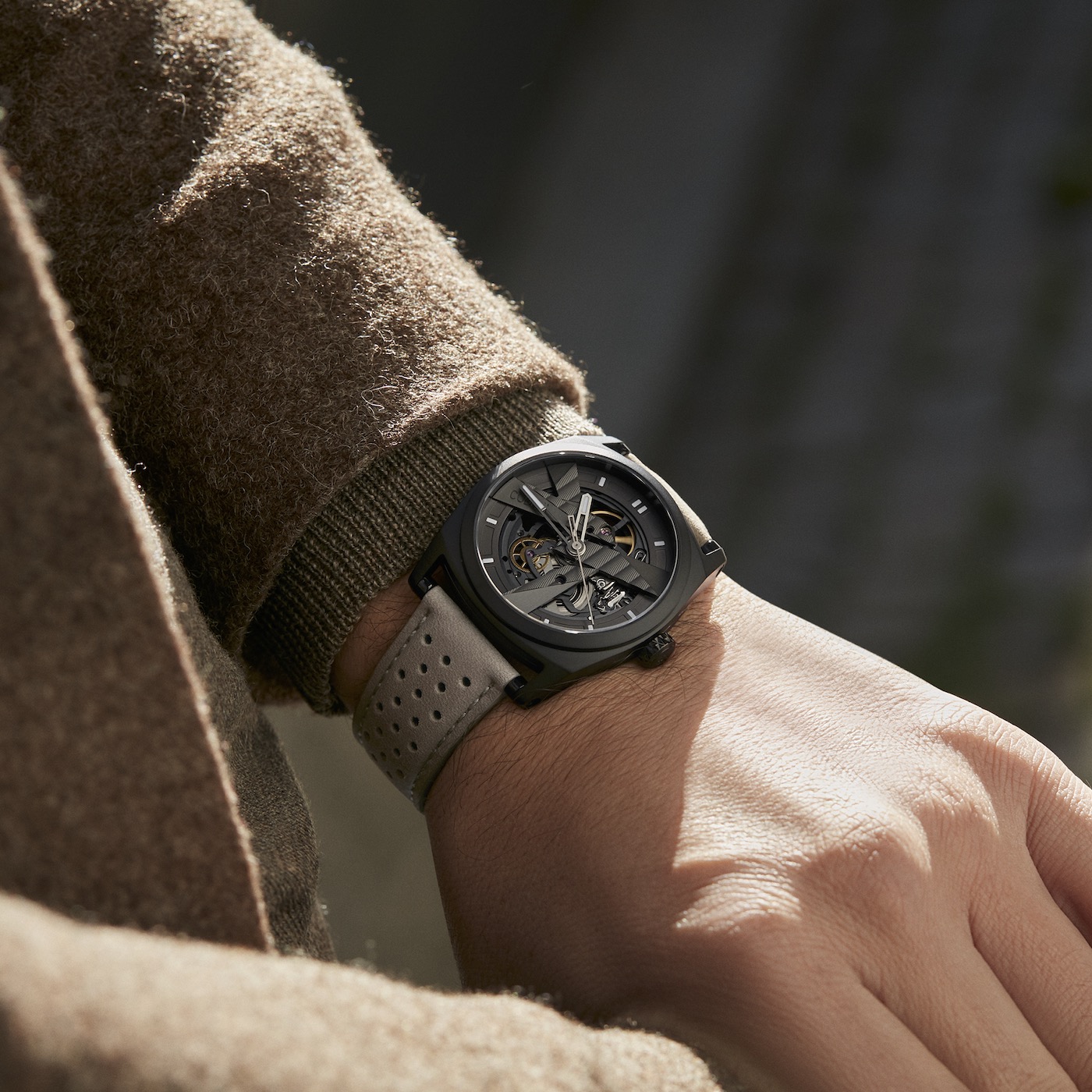 One of the things that differentiate CODE41 from almost every other watch brand is the brand’s commitment to transparency in manufacturing, which includes the origin of the different components, sourcing price, and markup (with a final price set at a fixed multiplier of 3.5). No concealment, no obfuscation. Pure transparency. As CODE41 says, “The retail price is not the result of market positioning, but rather a direct reflection of the costs of production.” Want to know how much the case costs to produce? Where the straps are made? Simply take a look at the table prominently featured on the website along with the watch specs. 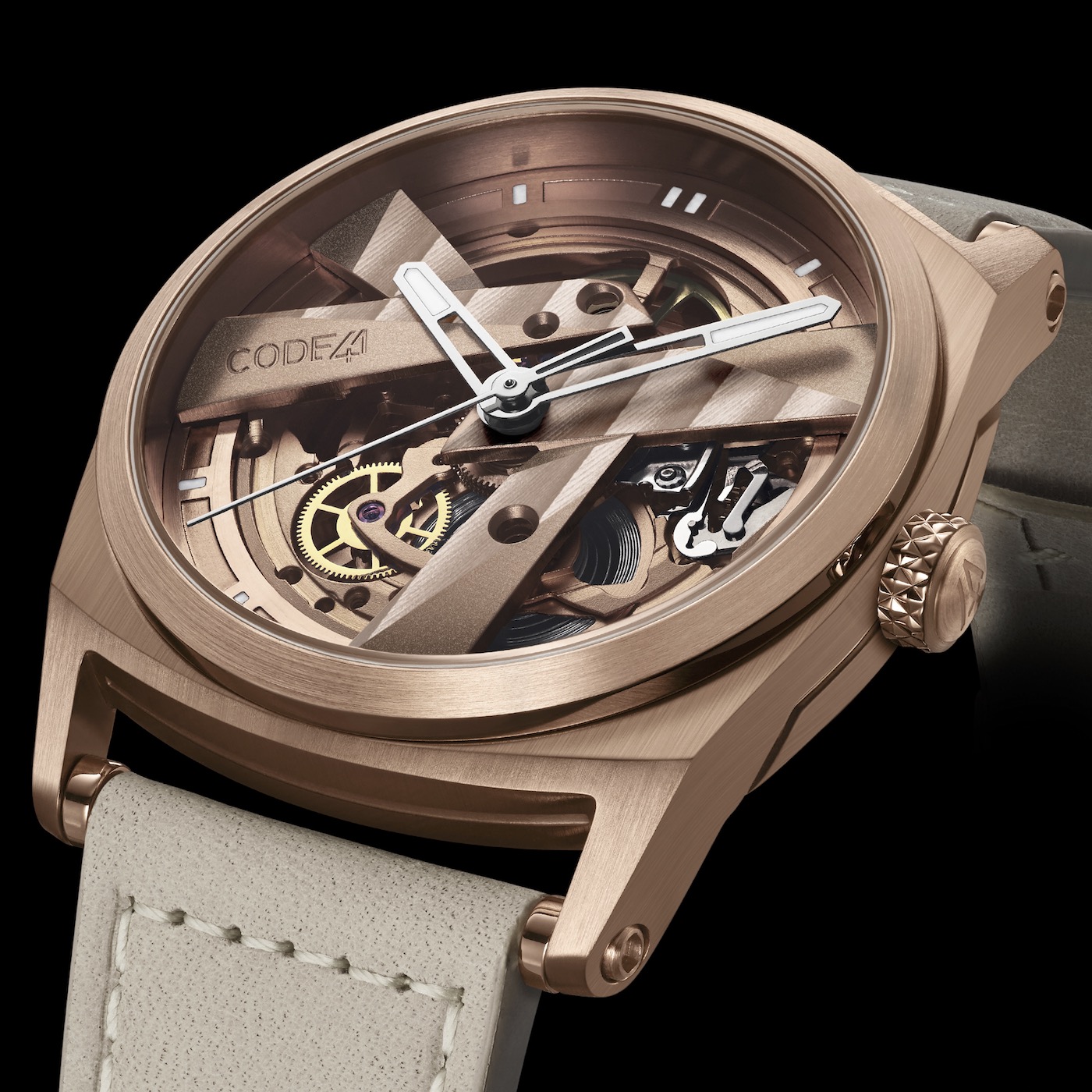 Through embracing community and transparency, CODE41 is able to offer a range of watches in its own unique design language but directly inspired by the needs of the owners. Many brands claim to offer exceptional value for the money, but with CODE41’s transparent pricing, you can see the value for yourself. 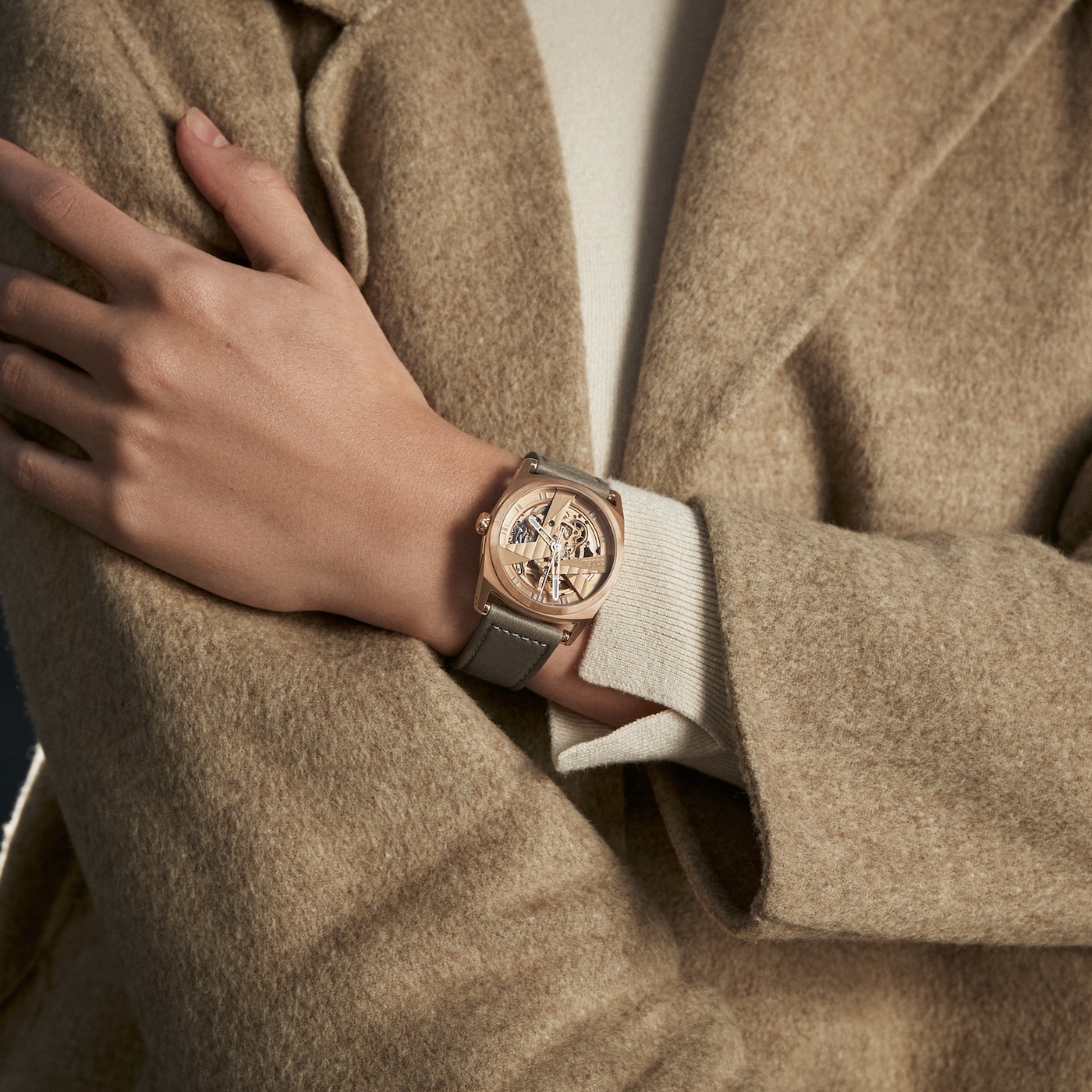 The CODE41 DAY41 will launch on November 26th, and pre-orders will continue until December 18th. Keep in mind, this is not your usual pre-order with a 6-7 month lead time. Instead, CODE41 will offer its members a 5-day delivery after the close of the pre-order period. The DAY41 will launch at a starting price of $1,180 USD and is limited to 800 pieces. To ensure peace of mind throughout the ordering process, CODE41 offers a free cancellation policy, 30-day free return policy, and a 2-year guarantee. To learn more about the DAY41 and become part of the CODE41 community, please visit the brand’s website.