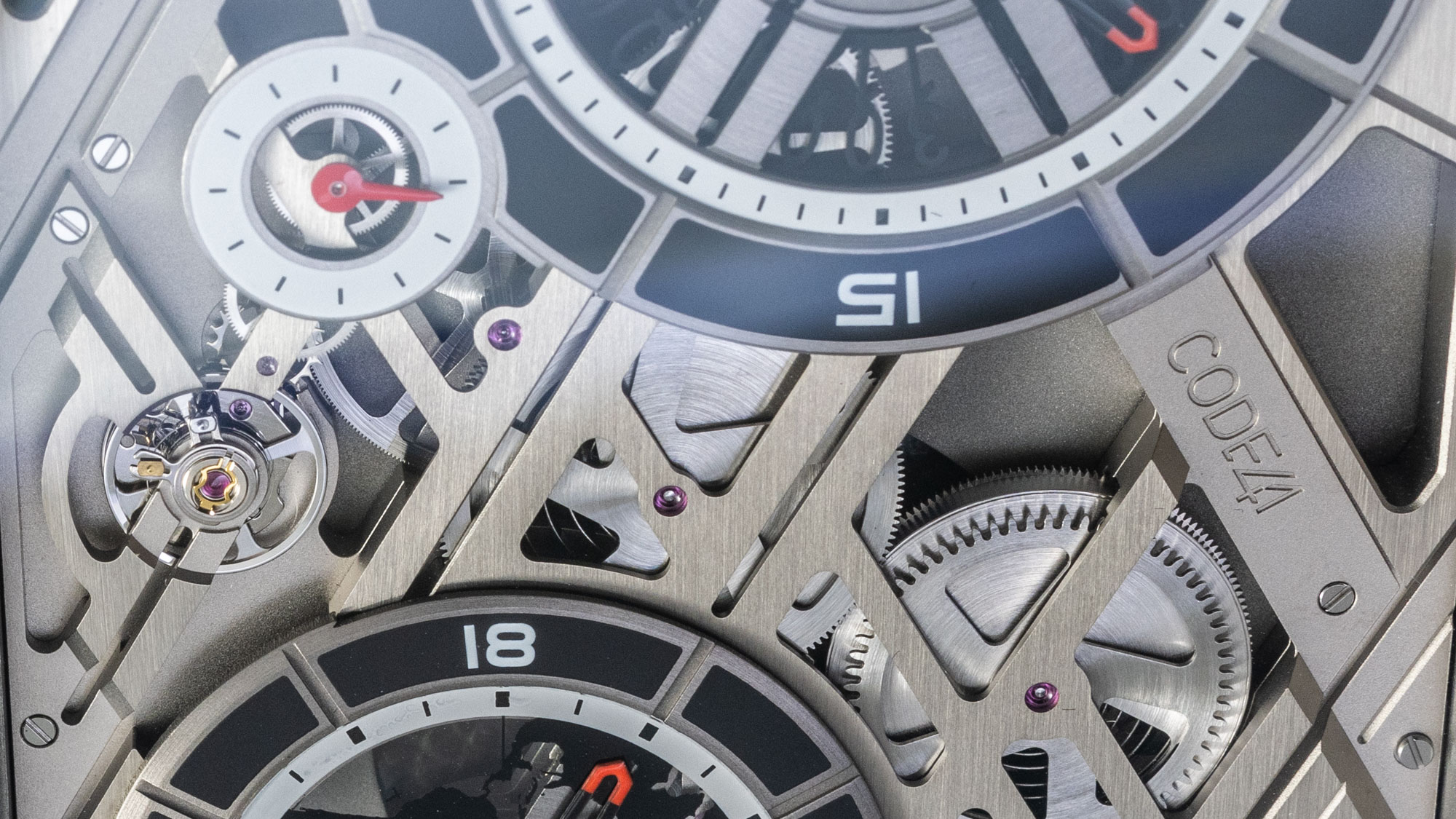 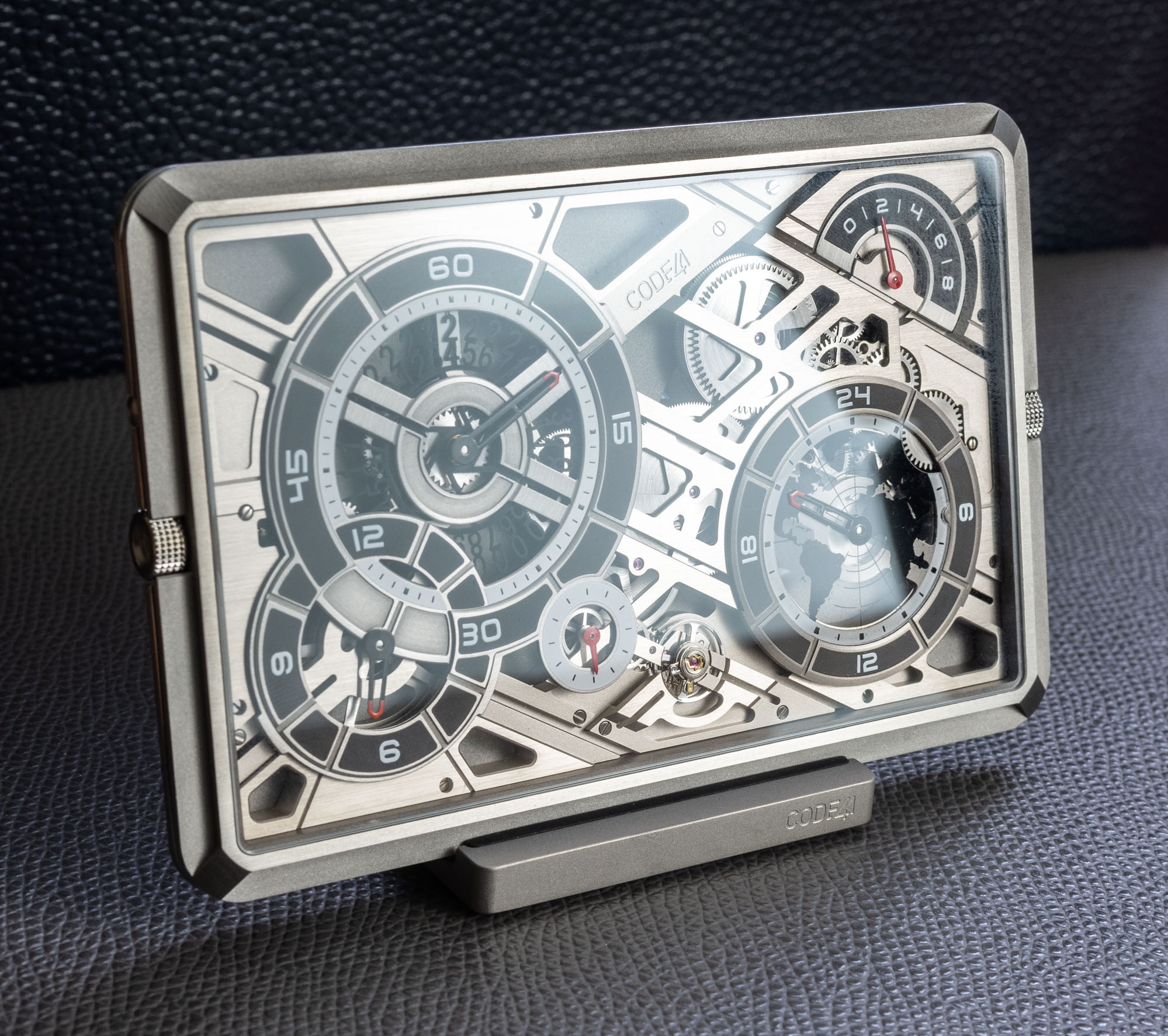 Young watchmaker Code41 started life by doing bold things and continues to understand that today’s market demands this level of commitment from the watch industry’s freshest faces. As a side product to the brand’s wristwatches, Code41 now launches the Mecascape, a pocket watch that is an entirely custom-made mechanical movement and mobile phone-sized case to carry it around in. The particular piece you see here is from the launch edition and Code41 calls it the Mecascape Sublimation One. It will be made as a limited production, the volume of which depends on the number of pieces ordered. This early prototype is a bit rougher than the final version will be, and also doesn’t have an anti-fingerprint coating applied to it, as I understand.

While the market for pocket watches is rather small, they do make wonderful show objects and are remarkably welcome objects of curiosity. That’s me saying that you need a mechanical watch for your pocket even less than you actually need a wristwatch, but their rarefied nature and large proportions make you feel good. I think I might also be describing the Mecasape as a toy — because that’s what it is, in a good way. Even the large proportions in your hand compared to a wristwatch make you feel small given the size. Code41 did a good job making the Mecascape wieldable, thanks to a titanium case construction, but this is nevertheless a heavy piece of metal in your hand. It is also nearly as slippery as an iPhone — thankfully, not as slippery. 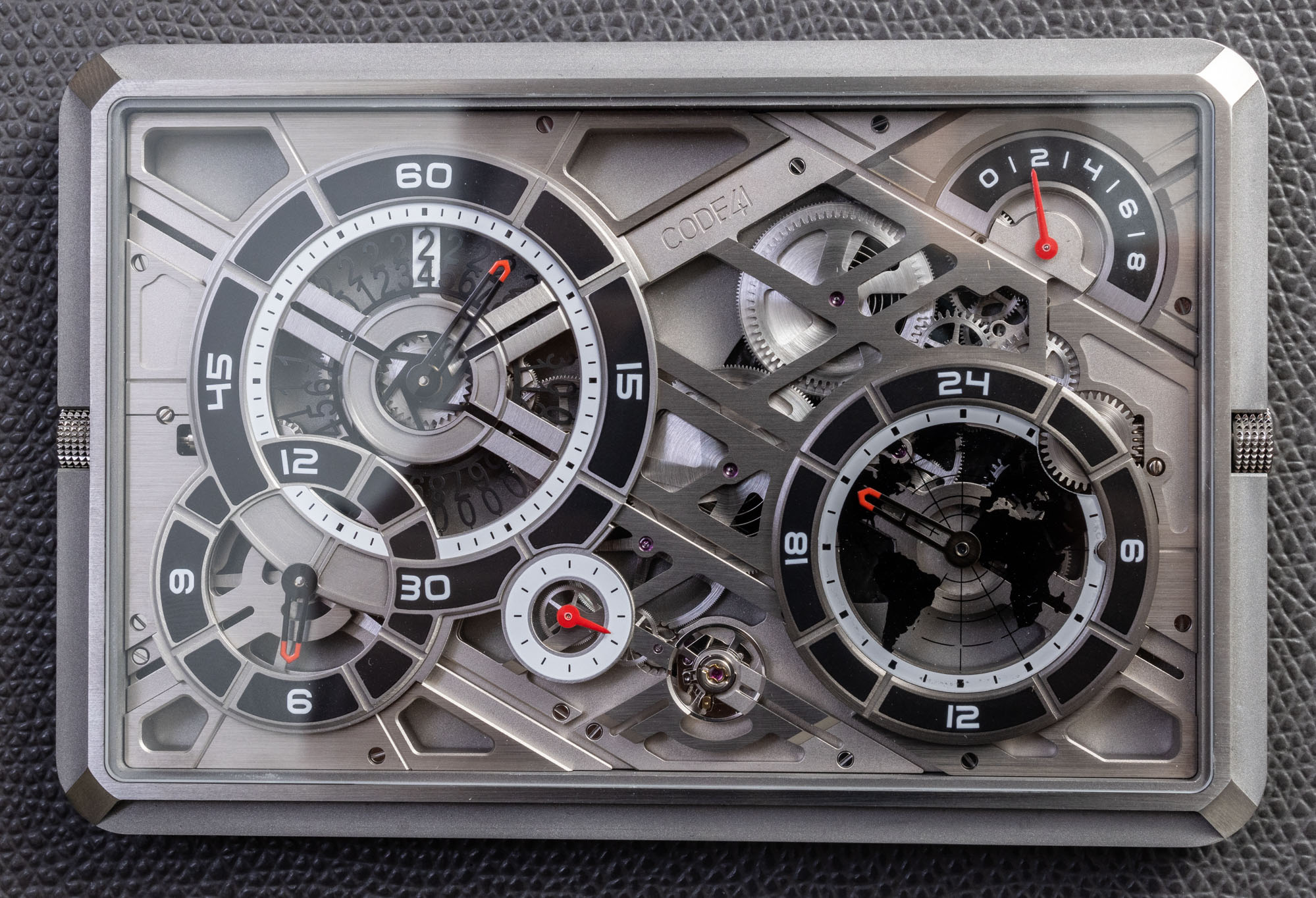 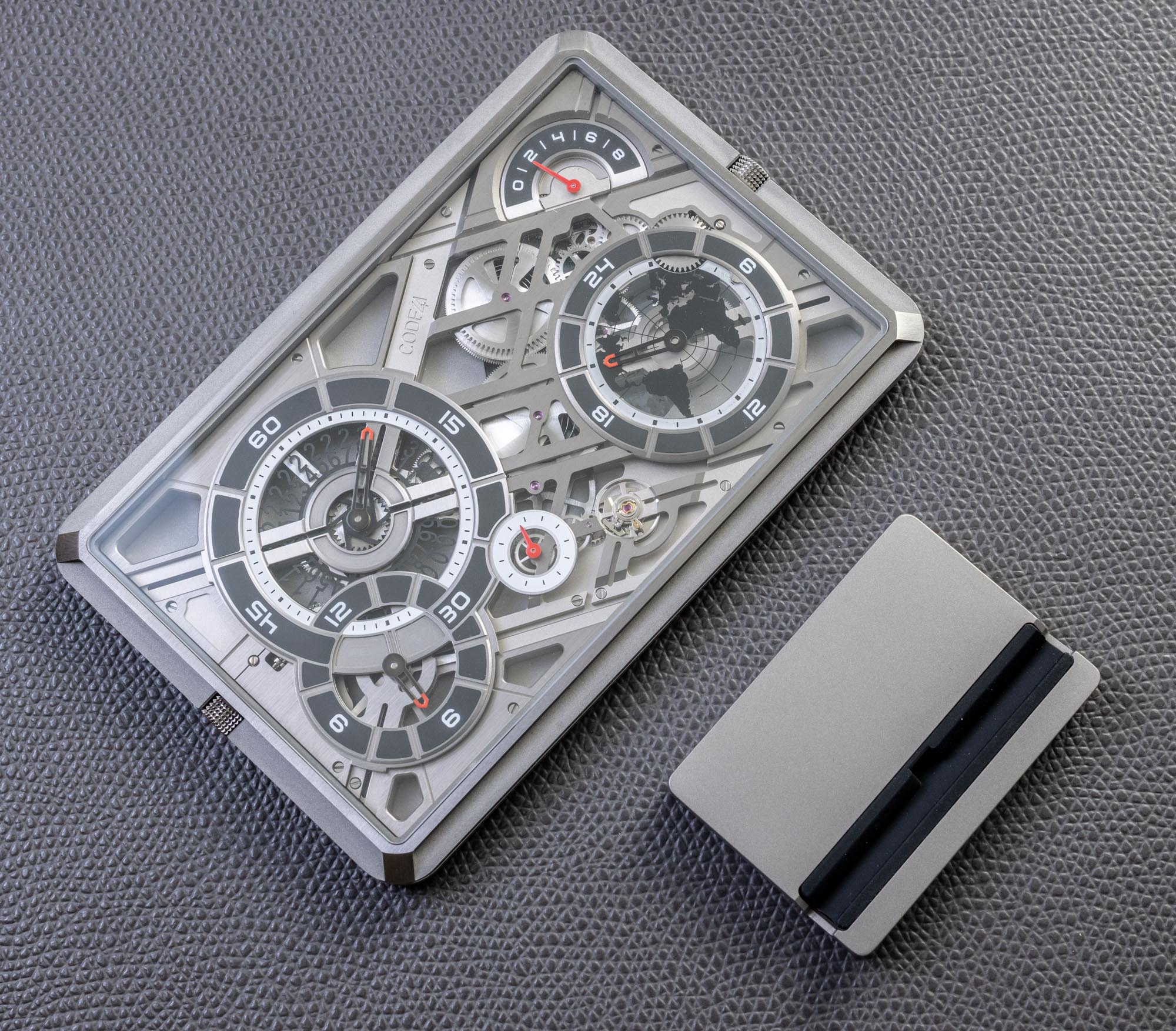 Code41 doesn’t supply a chain with the Mecascape, and I don’t think they intend for people to carry it around that way. The timepiece comes with a soft leather sleeve to tote the beautiful yet fragile object around, though it isn’t particularly practical since you still need to pull the Mecascape out to read the time. The more useful accessory is the small stand that allows you to prop up the Mecascape on a desk, where it can look its best. I really think that is where an object like this belongs — mostly on a desk, shelf, or table within eyeshot and where you can pick it up on a regular basis to play with it. There is a market for $10,000 desk toys out there, and this is going to be one of the holiday’s most interesting picks.

The idea of a high-end modern pocket watch is nothing new. Urwerk and Richard Mille come to mind as contemporaries who have come out with much higher-end pieces than the Mecascape, but that also had non-round cases. Even as luxury oddities, both of those products did well, and they also originally debuted about a decade ago. So, with regard to risk, even though the Mecascape is an avant-garde product, for sure, I would agree that it is a calculated enough move to advance Code41 in the direction its management wants to go. The Mecascape probably cost a fortune to engineer and produce, but I think Code41 has a good chance of at least earning its investment in developing it back. 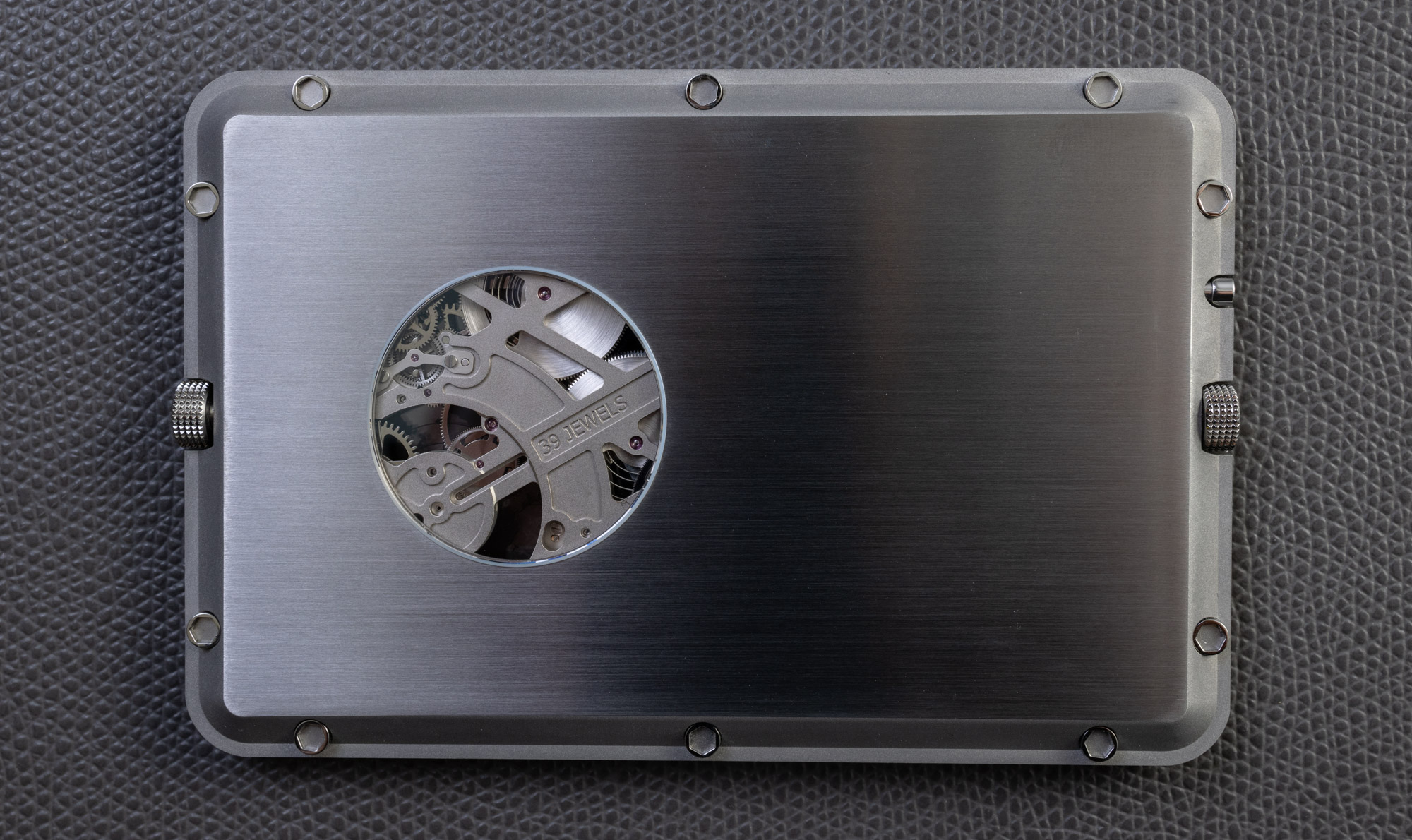 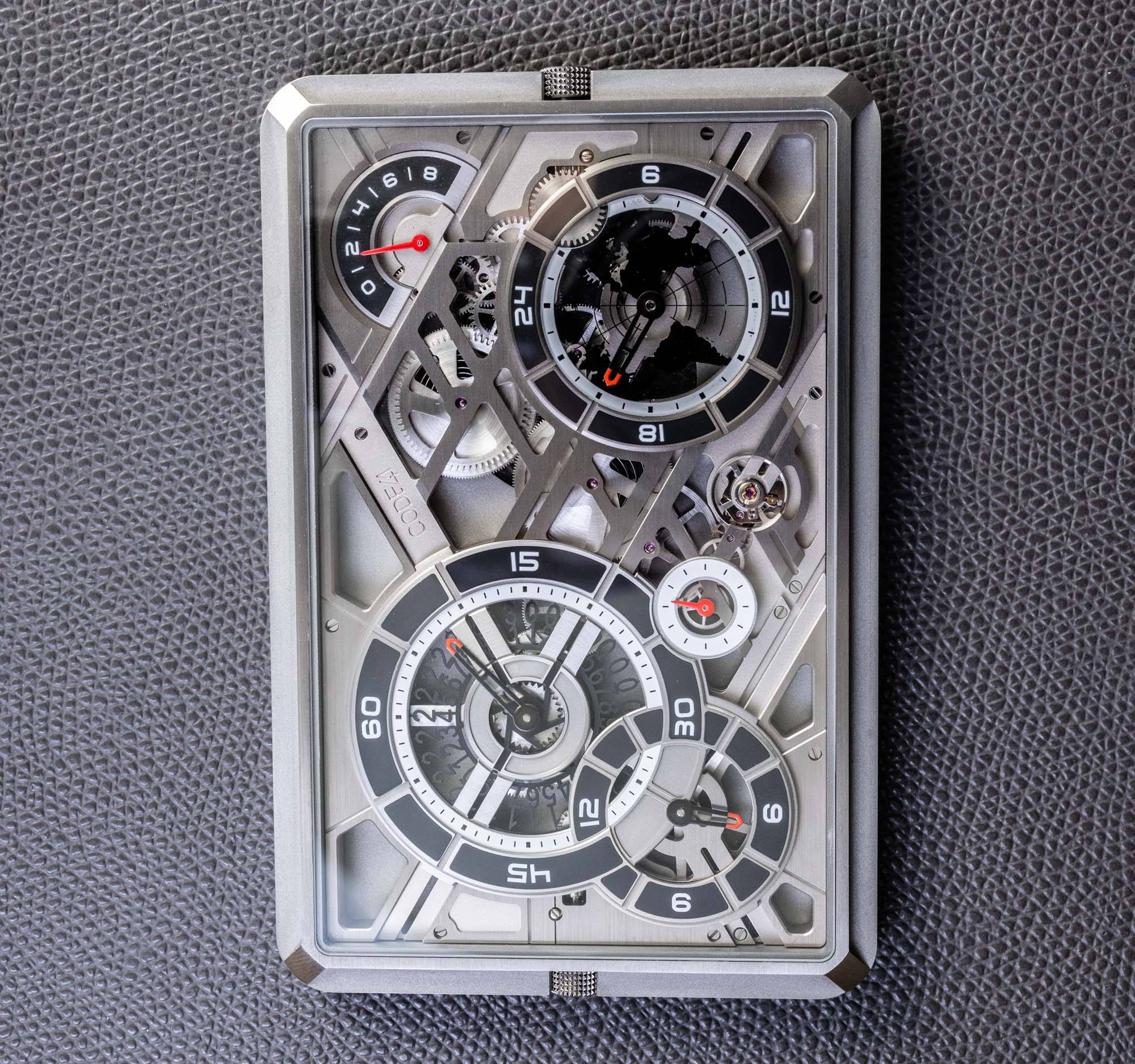 Code41 watches prefer angular, often asymmetric modern designs, and the Mecascape is very much a manifestation of that ideal. The rectangular titanium case has a large sapphire crystal over the dial and a smaller circular sapphire crystal window on the back. The case is 108mm-wide, 71mm-tall, and just about 8mm-thick. The case has two crowns (one on each side) and a pusher that is used when you want to adjust the date. The entire focus of the dial experience is to feature a vividly skeletonized view of a mechanical movement and to spread out the information indicators artfully around the surface areas. This led to a face with five hands and a skeletonized date indicator display.

The architecture of the movement follows the crisscross-cutting lines motif that the Code41 movement and case design language the brand is often known for. It makes for a very practical way to design a functional yet skeletonized movement platform. What I really like about the Mecascape movement is that it is more like a wristwatch movement than a pocket watch movement. It appears to use the regulation system and gear train from a wristwatch movement versus a pocket watch movement, but manages to include a larger barrel that offers eight days of power reserve. My favorite upside of the movement being based on the architecture from a pocket watch is that the Mecascape is not loud. This is a big deal to me because most of the other “horological sculpture clocks” out there are based on the clock (not the watch), and are accordingly loud. Even a traditional pocket watch movement can be on the loud side, so it is great to see that the solution Code41 came up with isn’t offensive to the ears. 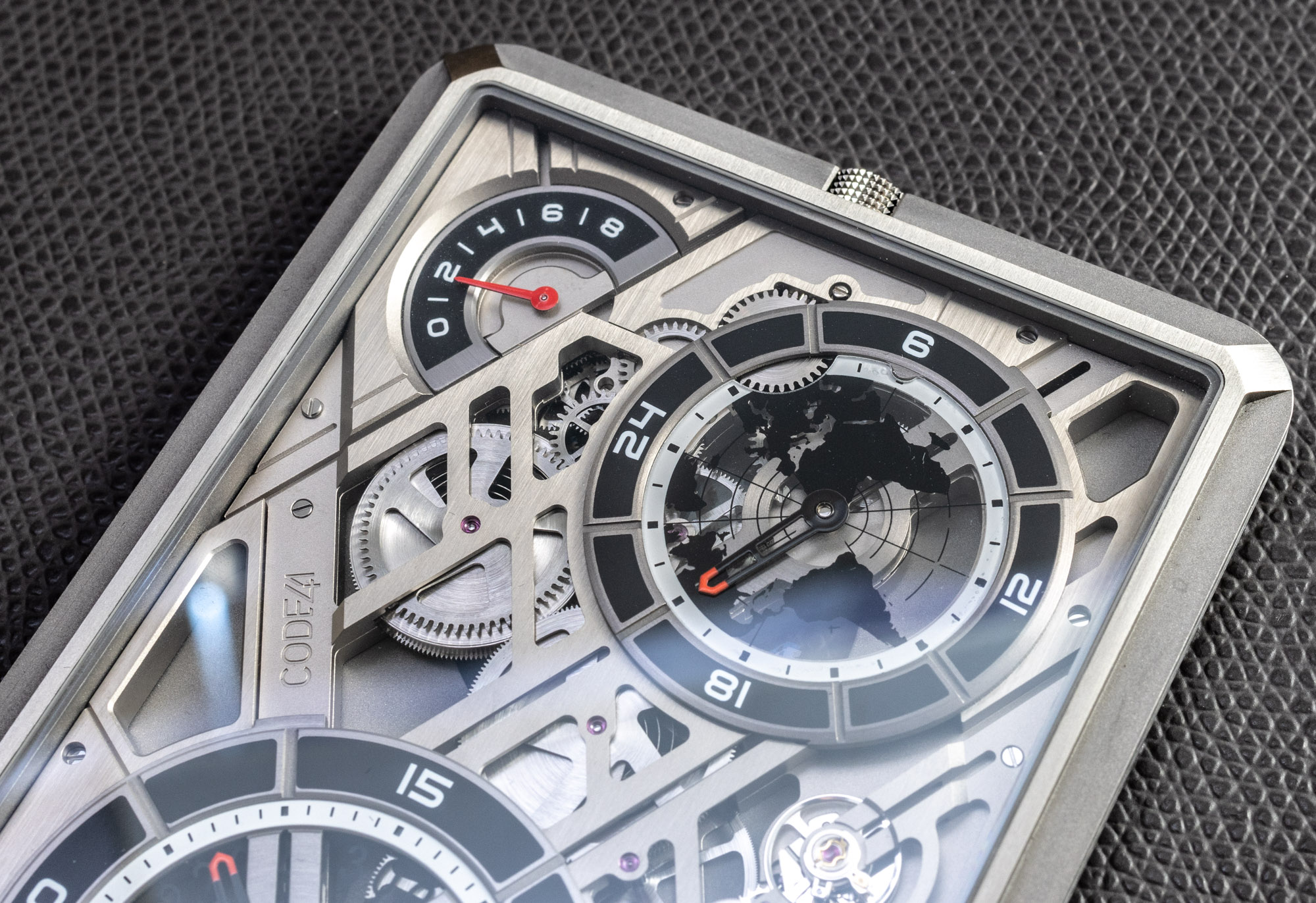 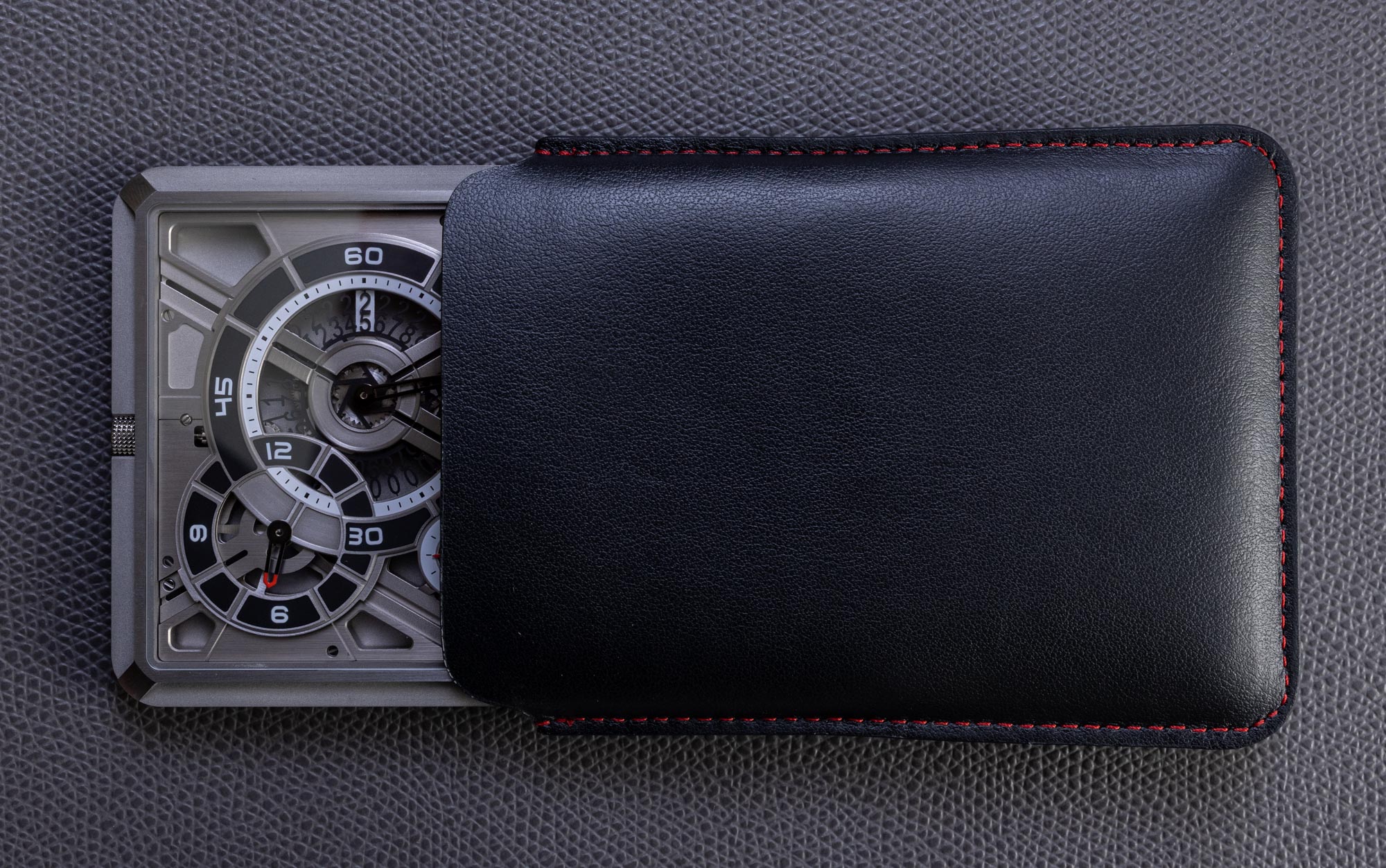 The movement operates at 4Hz and is made up of 237 parts. The main time is displayed in a regulator-style display, meaning that the hours, minutes, and seconds are separated on different dials. Adjacent to this main dial cluster is a second time zone dial with a single 24-hour hand and a globe motif in the center part of the circle. Above the second time zone area is a power reserve indicator. The crown located on the left side of the case adjusts the time. The crown on the left side of the case adjusts the second time zone when pulled out, and when pushed in, the crown winds the mainspring in this manually wound movement.

Mechanically speaking, the Mecascape is simple, but it is nevertheless satisfying, and I think Code41 approached the concept intelligently. A more complicated movement would have easily made the cost of this item that much higher, and even at this price point, Code41 still gets to claim the Mecascape has an original movement that it specially designed for this purpose. I am not convinced that the Mecascape is an ideal object to tote around on your body (I just feel that it could be too fragile or cumbersome in pockets for that), but it does make for a powerful office or room accessory and is fun to hold and play with. Code41 certainly wins when it comes to making people who play with one of these timepieces smile. 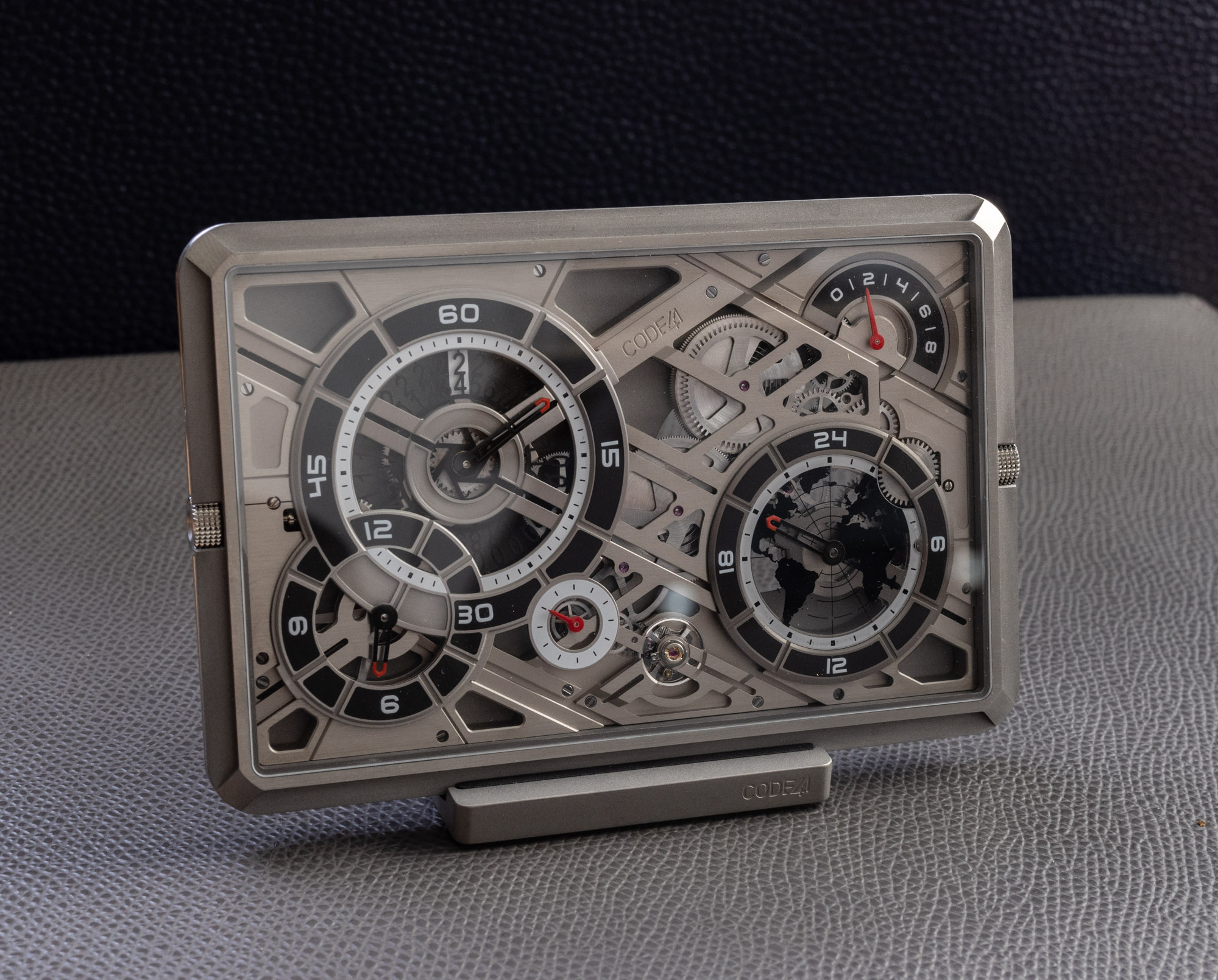 The entire Mecascape concept is meant to be modular. Already, Code41 has planned future versions after the Mecascape Sublimation One that have different dial color accents compared to the black, white, and red on this version. I don’t know if Code41 will venture into different case materials or complications, but even sticking to titanium, there is a lot they can do with this current design, especially if the brand plays with coloring the movement bridges.

Code41 should feel proud for doing something unexpected and interesting with the Mecascape. It proves that the company likes timepieces for the right reasons, and it also offers a product in the market that has very little direct competition. I don’t think the Mecascape will necessarily be an overnight success, but orders for the first models are quite strong. As I said, even though a concept like a titanium pocket watch that feels like a very limited-purpose mini iPad doesn’t work on paper — but when you see the end result, it makes you feel good. Getting this pocket watch made required diligence and vision, qualities we want in the firms making our luxury mechanical toys. Price for the Code41 Mecascape Sublimation One timepiece starts at $9,360 USD. Learn more at the Code41 website here.