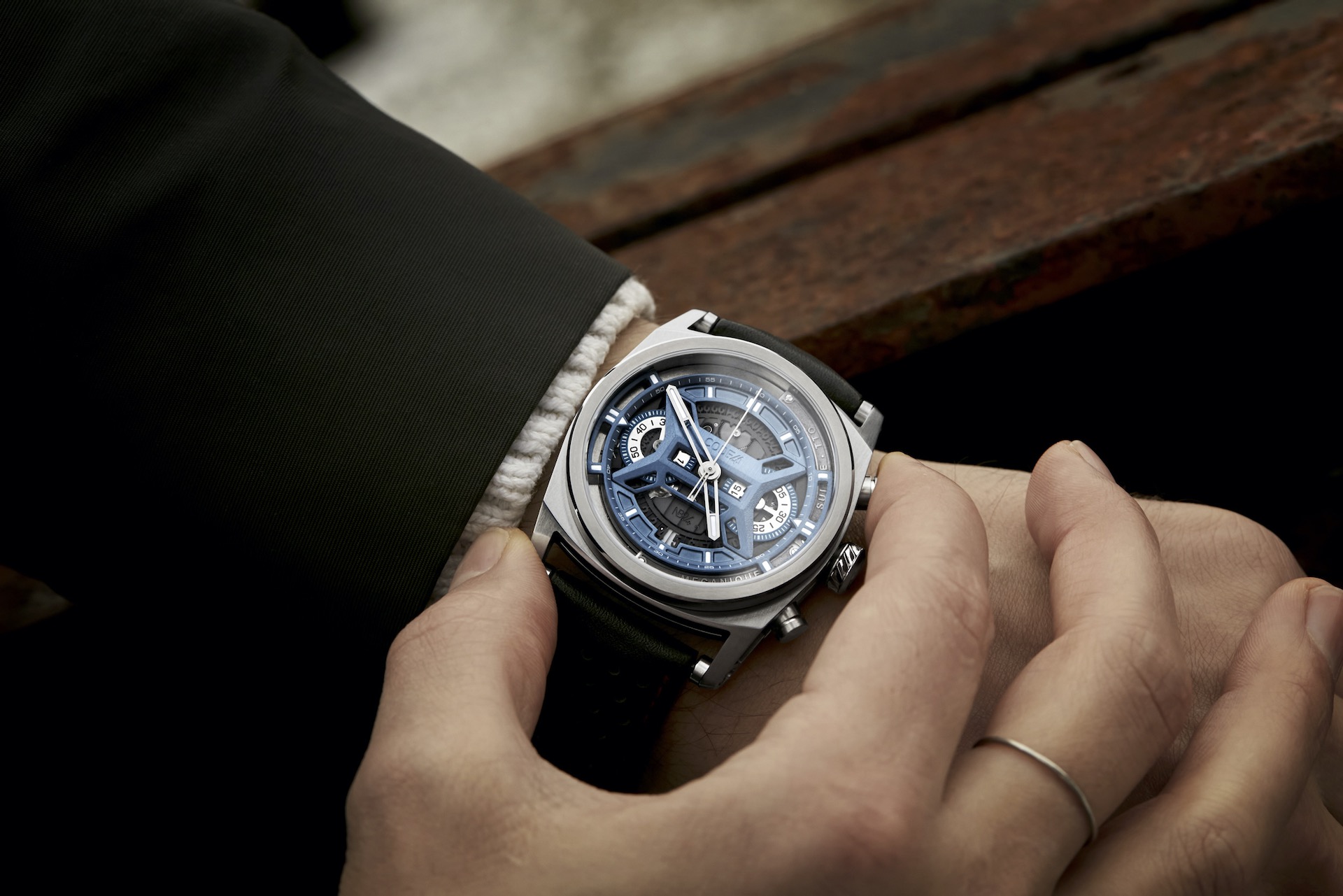 CODE41 Launches The NB24, A Chronograph With A Dial-Side Peripheral Rotor

17 Comments
by SponsoredPost
Sponsored post presented on aBlogtoWatch by advertiser

A quick glance at CODE41’s catalog reveals the brand’s commitment to modern design, innovative use of materials, and a penchant for showcasing its custom movements. But it’s what lies behind the development of these watches that truly sets the brand apart. CODE41 is an open, community-driven brand that embraces feedback in direction and design. CODE41 heeded its community’s call for a chronograph and responded by developing the NB24, a chronograph unlike any other on the market, featuring a bespoke movement that showcases a peripheral rotor on the dial side of the watch. And true to the brand’s commitment to transparency, you can see the production cost of each component, along with its source of origin, allowing you to see and appreciate the value for yourself. For those familiar with CODE41, the modern, aggressive aesthetic of the NB24 will be instantly familiar.

The CODE41 NB24 is offered in two case materials: grade 5 titanium or AeroCarbon. Both options offer distinct benefits in strength and weight, though with distinctly different aesthetics. Because titanium is 43% lighter than stainless steel, the already well-proportioned 42mm case will be extremely comfortable for all-day wear. The titanium is finished with a mix of brushed and polished surfaces, sharp angles, and a distinctly modern aesthetic. 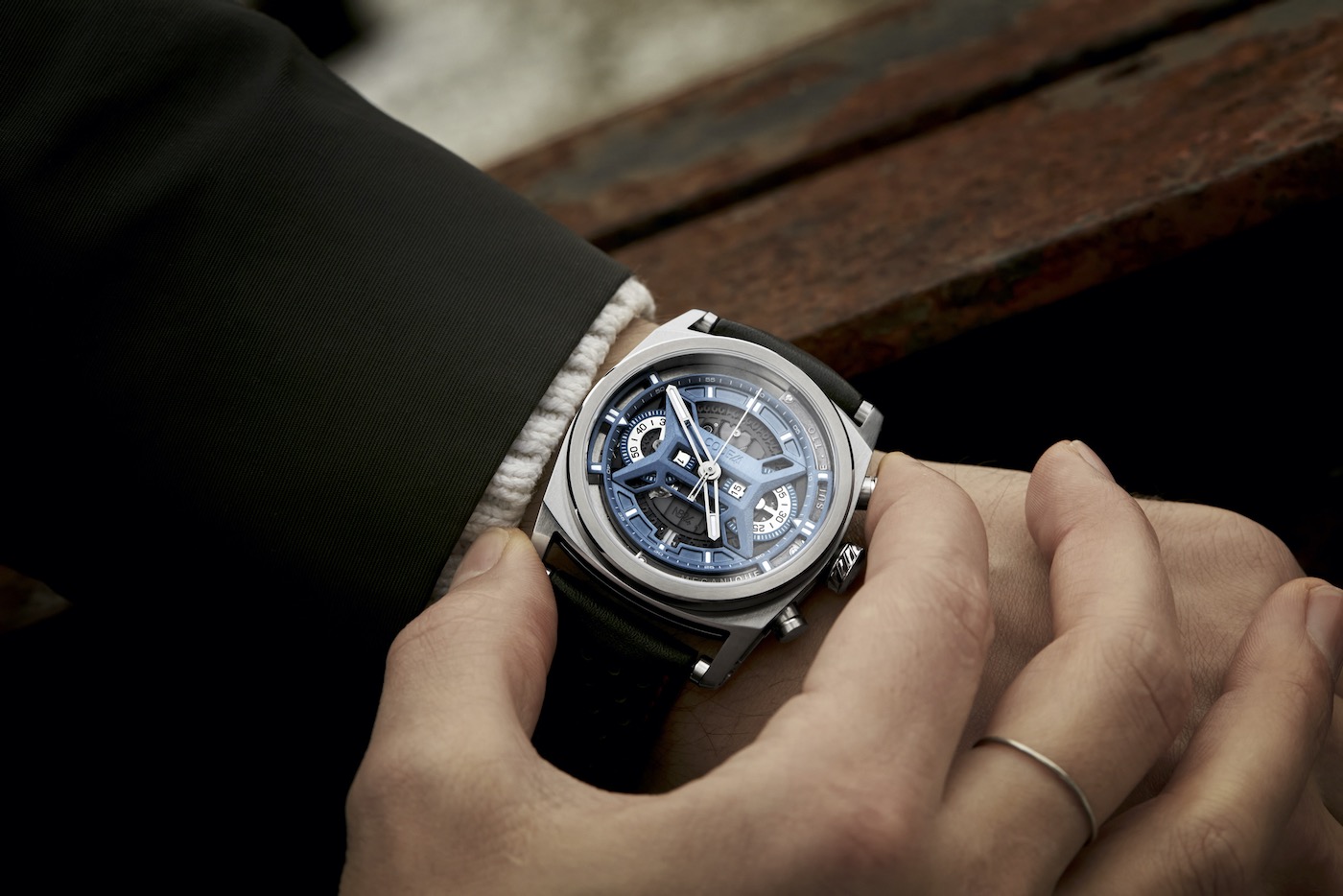 If the 78g (without strap) weight of the titanium case isn’t quite light enough for you, the AeroCarbon case barely tips the scales at 68g. Produced in France exclusively for CODE41, the AeroCarbon case is created from high-density aeronautical carbon fiber. The process involves aligning hundreds of layers of carbon fiber at 90-degree angles to the last and compacting them under 10 bars of pressure in an autoclave oven. The result is a case material that’s exceptionally light, yet 2.5 times more resistant to bending than steel. Once machined into a case, the result is a striking black with an organic patterning created by exposure of the different layers of carbon used in the production process. 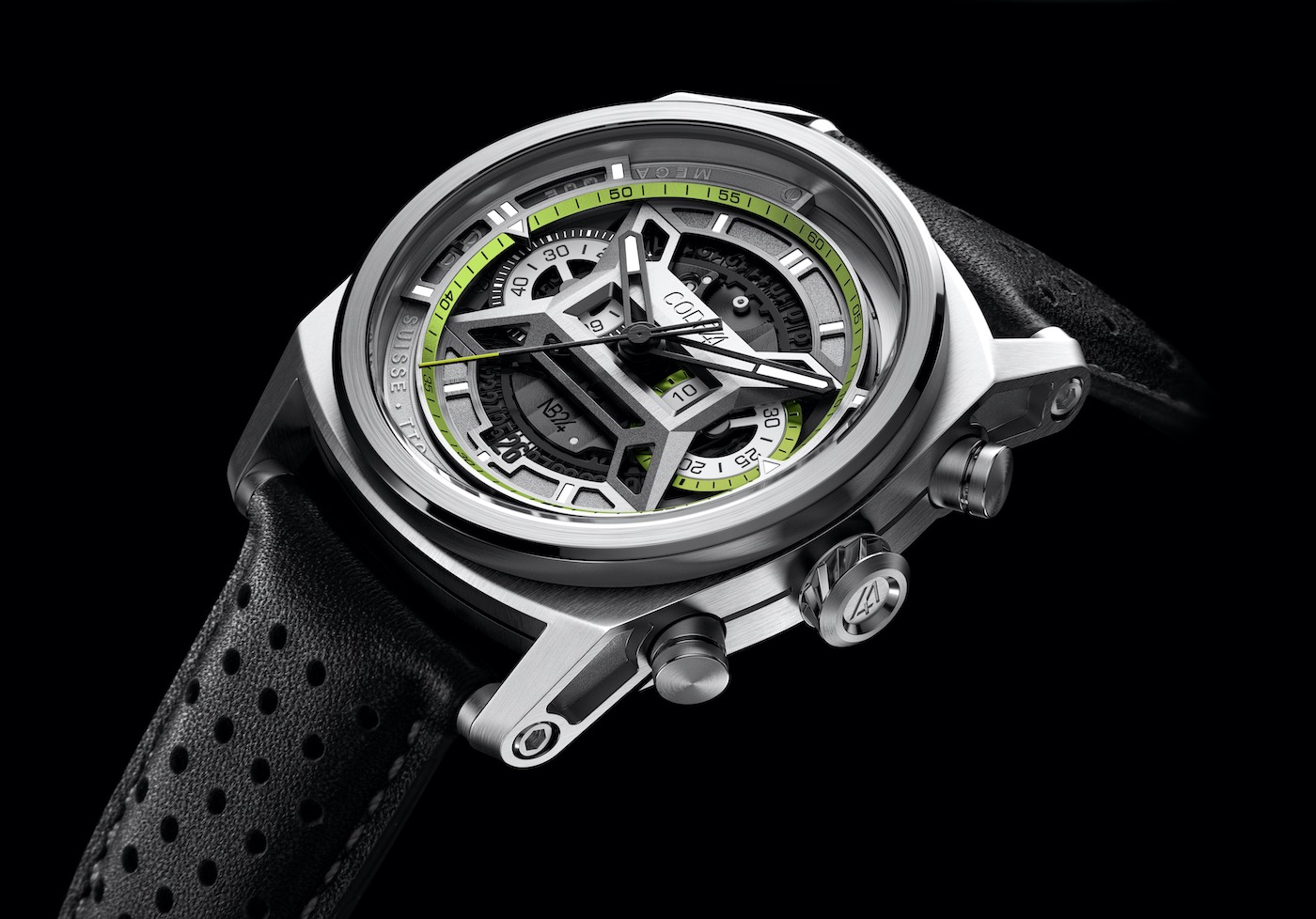 The first chronograph movement produced by CODE41 is powered by its custom NB24 movement. The caliber designation of NB24 was chosen in honor of brand ambassador Nigel Bailly, a young paraplegic driver who has had his sights set on the 24 Hours of Le Mans since 2017. CODE41 and the new NB24 chronograph will be on Bailly’s wrist as he undertakes this grueling race in June 2021. The NB24 movement architecture is based on the venerable Valjoux 7750 chronograph movement. Produced in-house by Swiss manufacturing partner Concepto, the design has been highly modified by repositioning the counters, redesigning the bridges, and adding a peripheral oscillating weight on the dial side. In other words, by basing the movement on the 7750, CODE41 was able to create a movement that offers all the functionality and reliability of the 7750, but with several major improvements. The NB24 automatic chronograph movement is comprised of 326 components, features 35 jewels, Incabloc shock protection, and beats at 28.8kbph with a 48-hour power reserve. In addition, each movement is tested in five positions, resulting in a +/- 5 seconds/day accuracy. That said, the star of the show is undoubtedly the dial-side peripheral rotor. 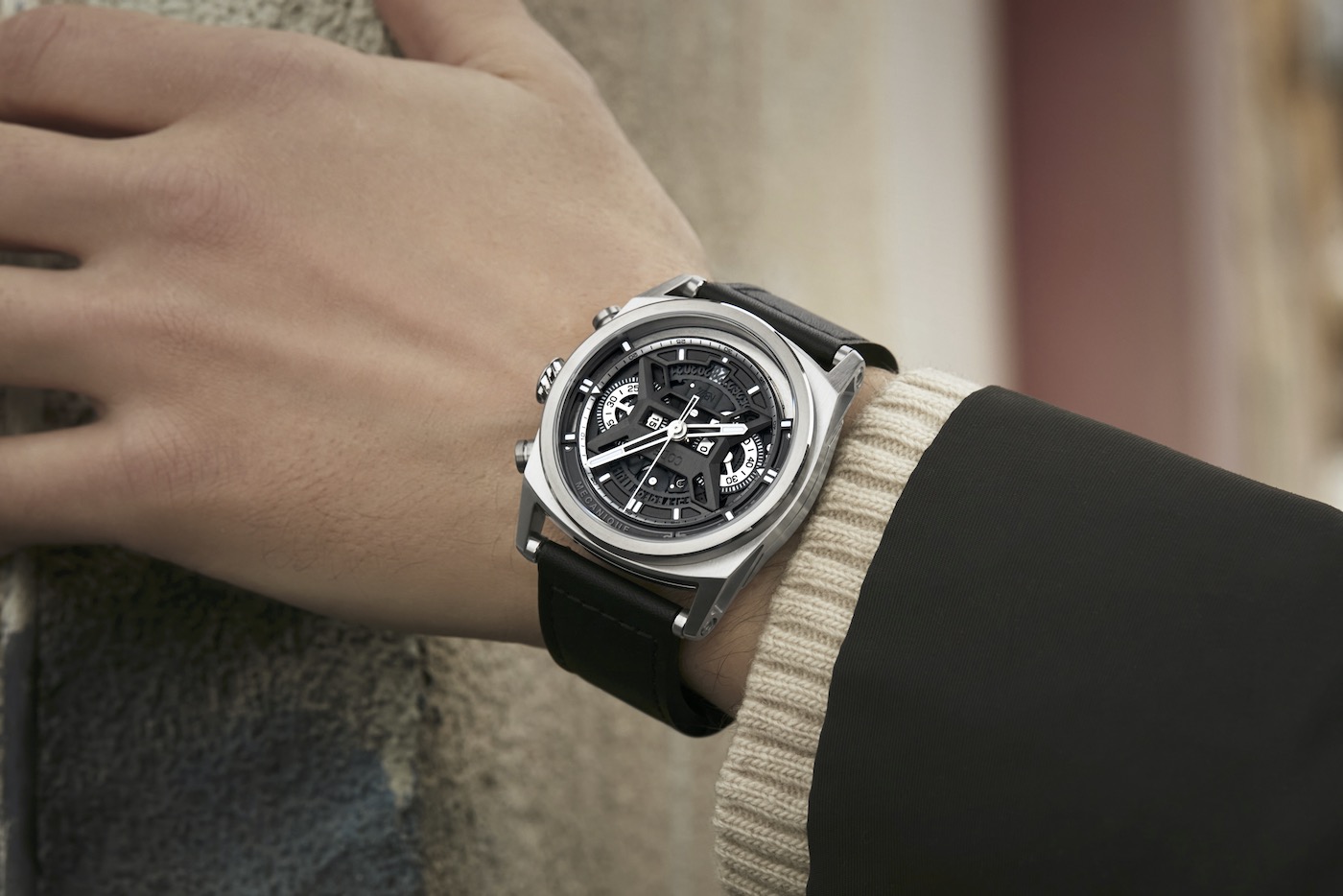 Few watch brands at any price offer a peripheral rotor — an oscillating weight that winds the mainspring by rotating around the periphery of the movement rather than sitting atop the main plate. CODE41 takes things a step further, placing the peripheral rotor front and center by moving it to the dial side of the watch. This modification is both unique and highly functional, as it allowed CODE41 to reduce the case thickness to just 13.7mm. The rest of the movement echoes the sharp, angular lines of the case and is visible behind the sapphire caseback. 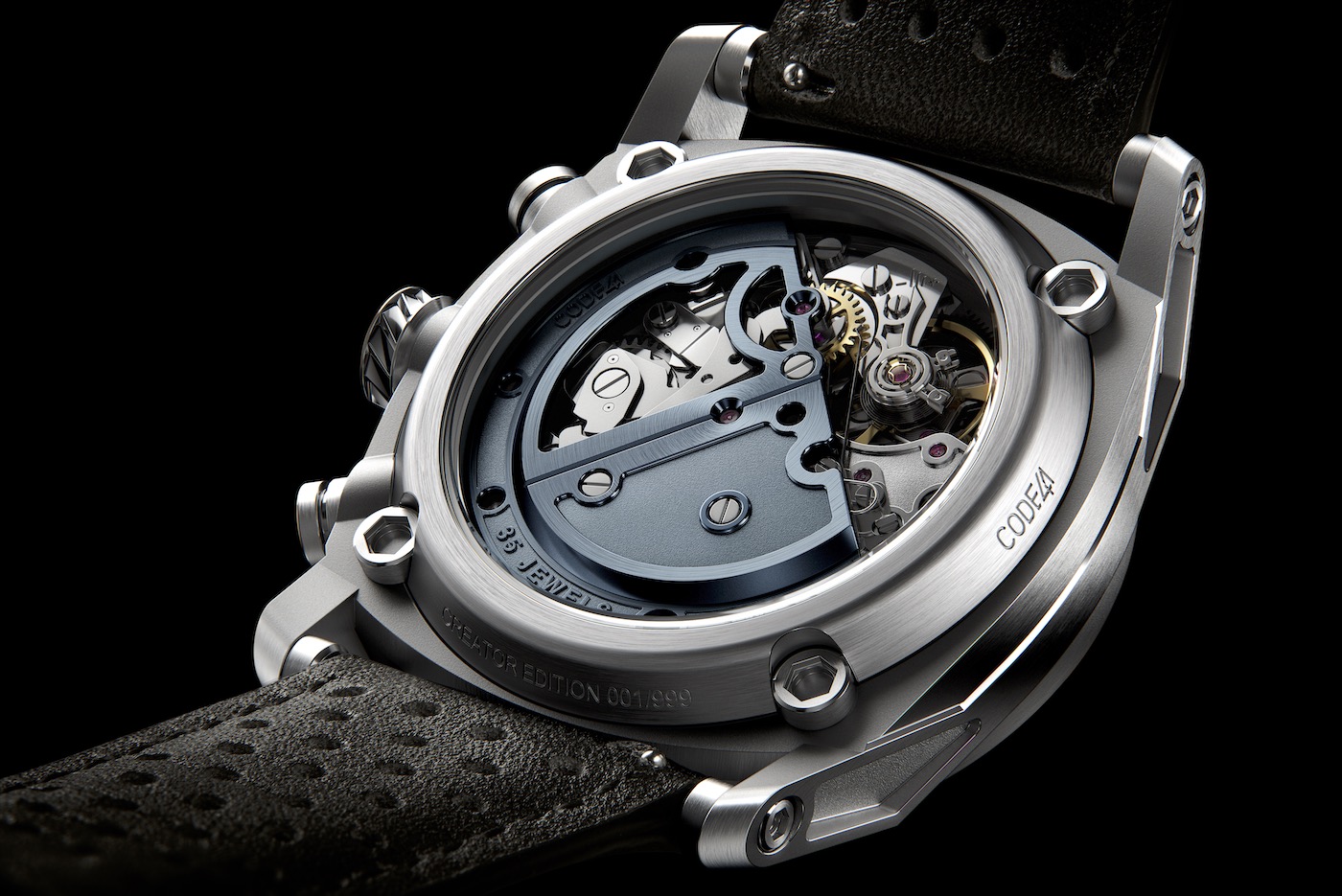 Like many of CODE41’s offerings so far, the dial of the NB24 is open and structural, allowing the bespoke movement to shine through and offer a novel take on the classic chronograph movement. Running seconds are positioned at 9 o’clock with the 30-minute chronograph register at 3 o’clock. However, rather than use a static register with a central hand, CODE41 chose to adopt moving discs for the running seconds and minute counter. The NB24 also offers a unique take on the date wheel, which is completely skeletonized, but visible at 6 o’clock when viewed against a contrasting white background. As visually interesting as these elements are, it’s still the peripheral rotor that steals the show, sweeping smoothly outside the minute track. 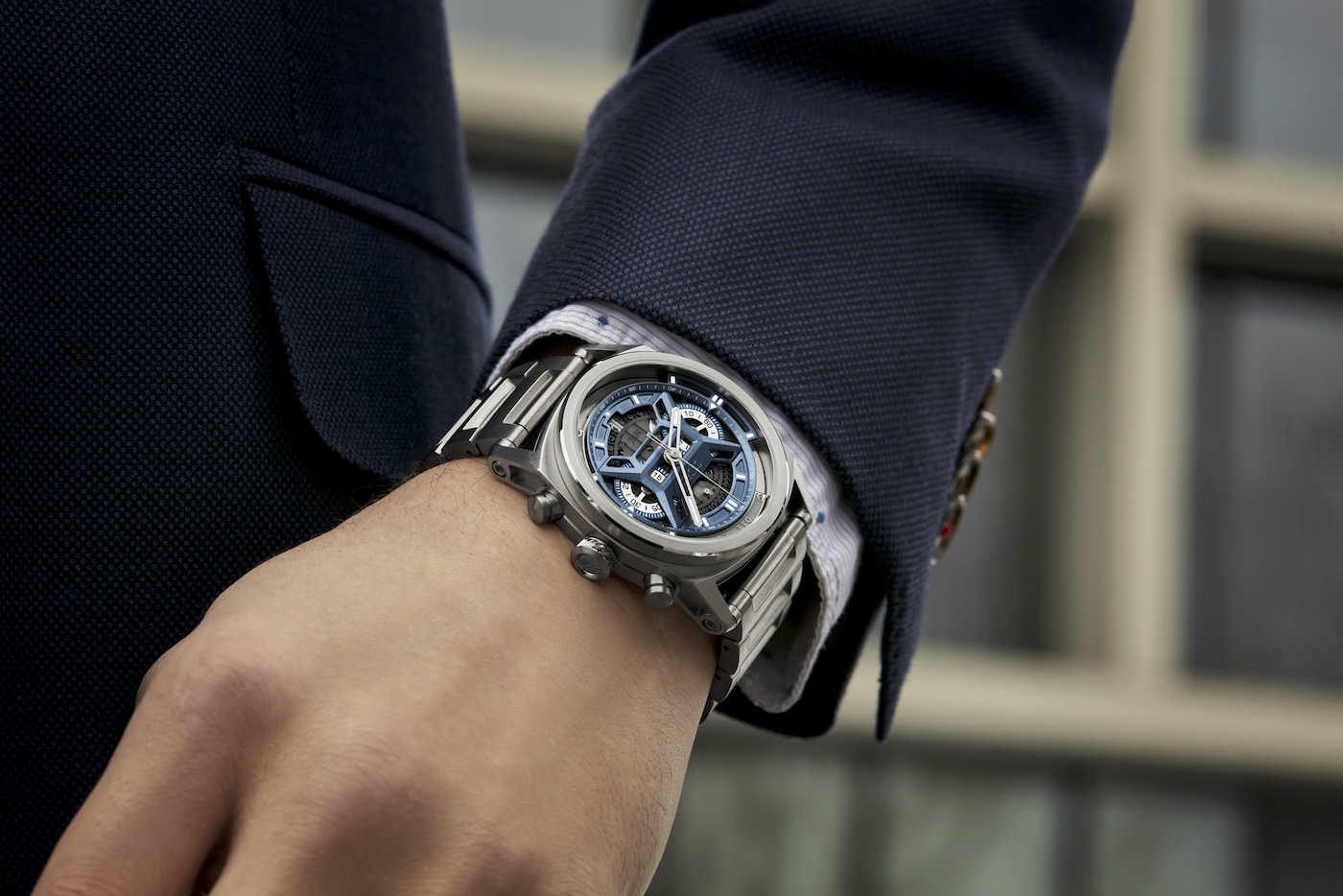 Despite the open and striking visual elements on the dial, CODE41 prioritized legibility and functionality in the NB41. The hands are large and luminous and accompanied by lumed hour markers, ensuring easy readability, day and night. The watch is also water-resistant to 10 ATM — not bad for a chronograph. The NB24 is available in four colorways: blue, green, red, and black. Each of the colorways is available in the titanium or AeroCarbon. CODE41 took a restrained approach to color, each adding a touch of individuality rather than dominating the palette. Each watch is available on a wide range of quick-release, eco-friendly strap options or a titanium bracelet. 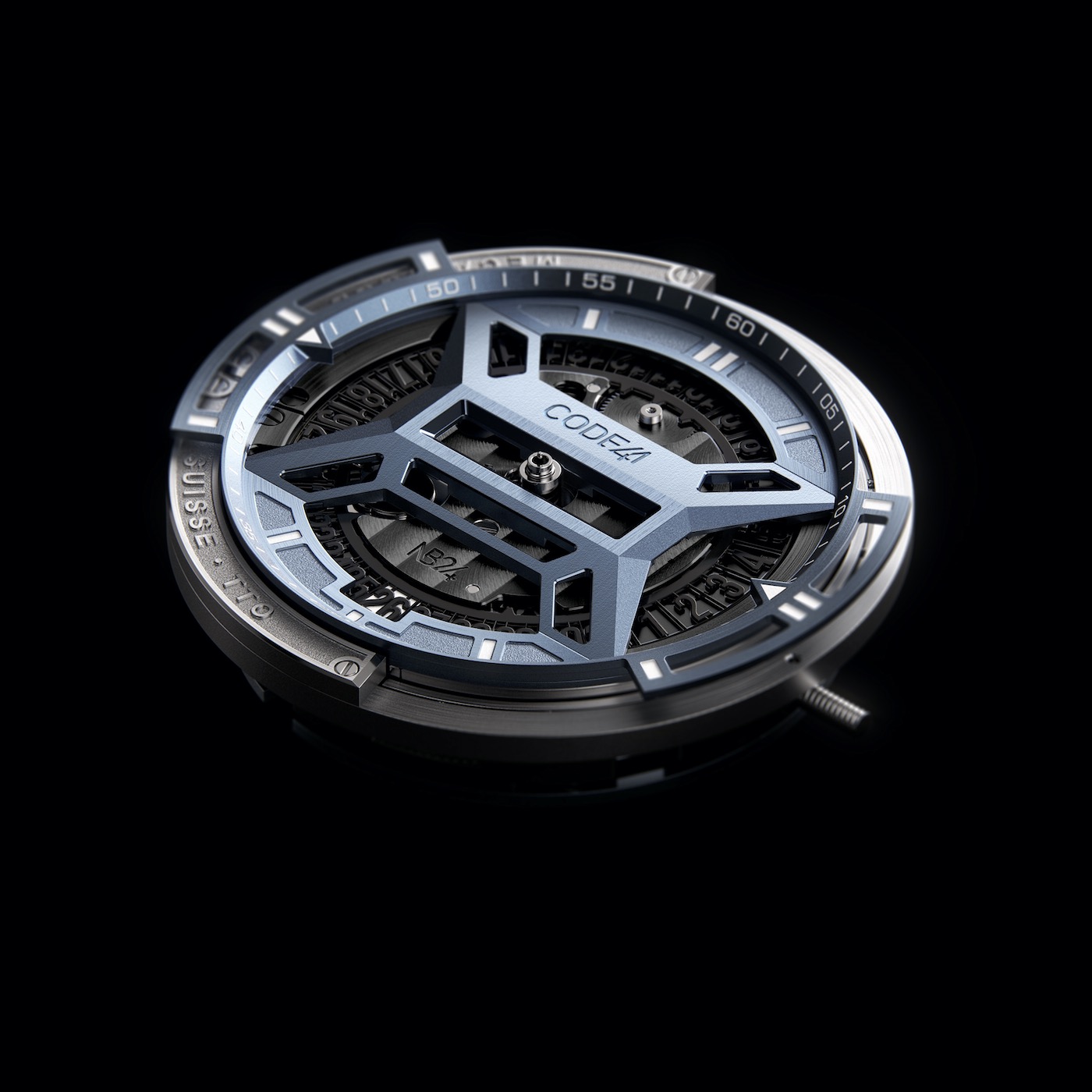 With the NB24, CODE41 continues its commitment to total transparency in manufacturing. The origin, sourcing price, and markup are all available on the website, plain to see. Despite the fact that the movement is Swiss, the watch is assembled in Switzerland, and more than 85% of the value comes from Switzerland, you won’t find Swiss-made anywhere on CODE 41’s watches. Why? Because CODE41 feels that the Swiss Made designation is often misleading and misused – they’d rather show the consumer exactly where each part is sourced and where the costs are incurred. 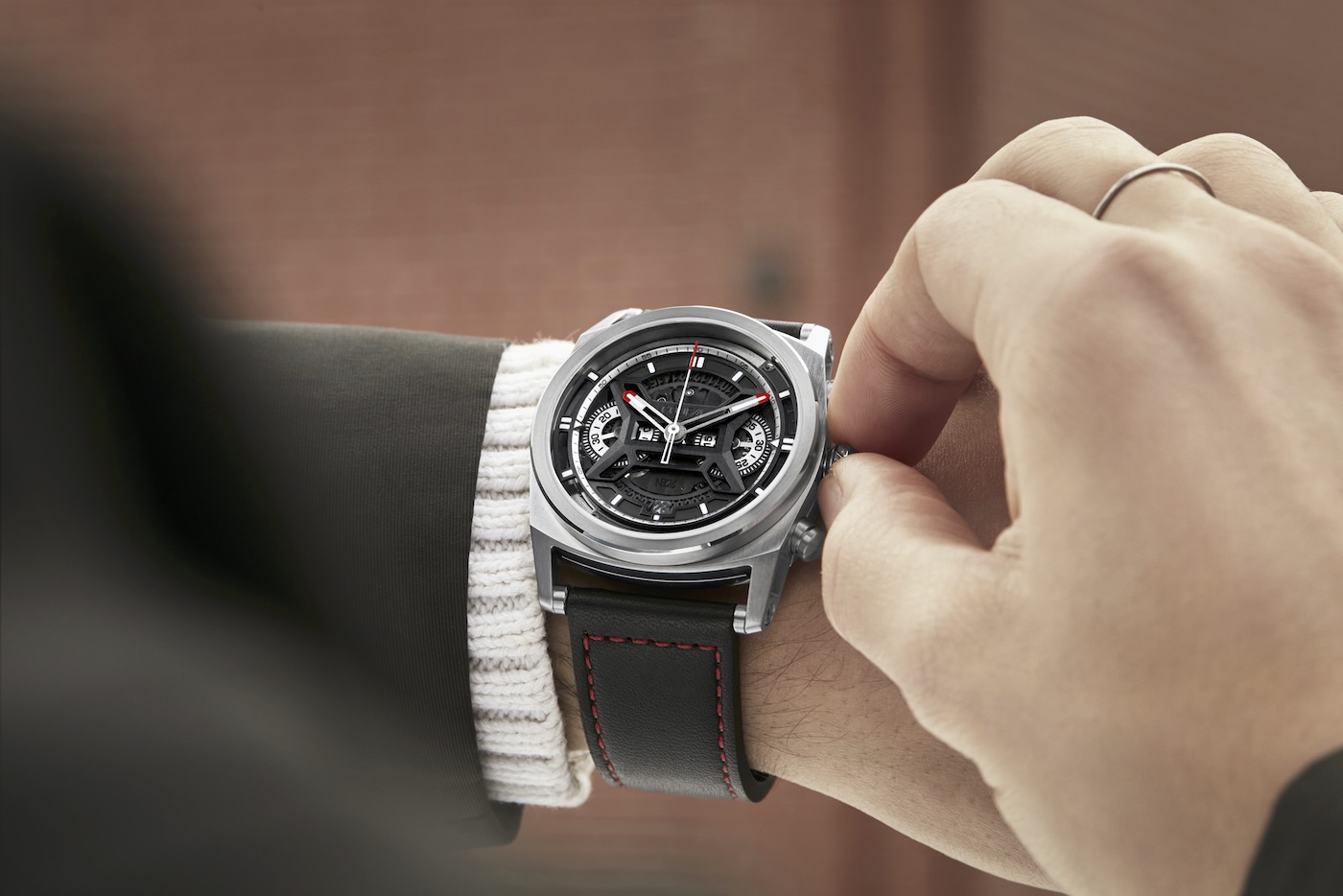 The CODE 41 NB24 is currently available for pre-order until February 25, 2021. Prices start at $3480, and for more information on the new NB24 chronograph and to join the CODE41 community, visit the brand’s website.