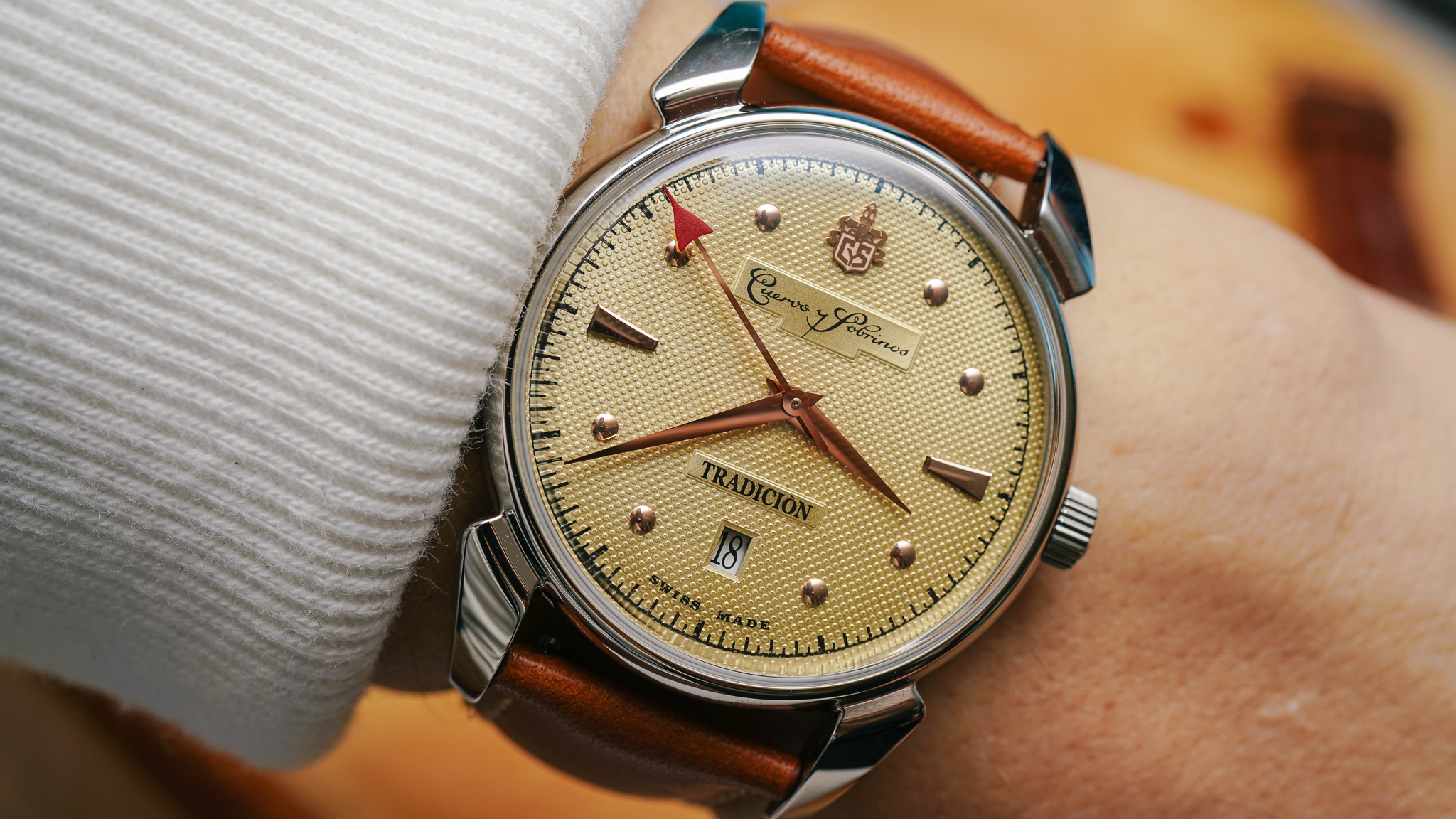 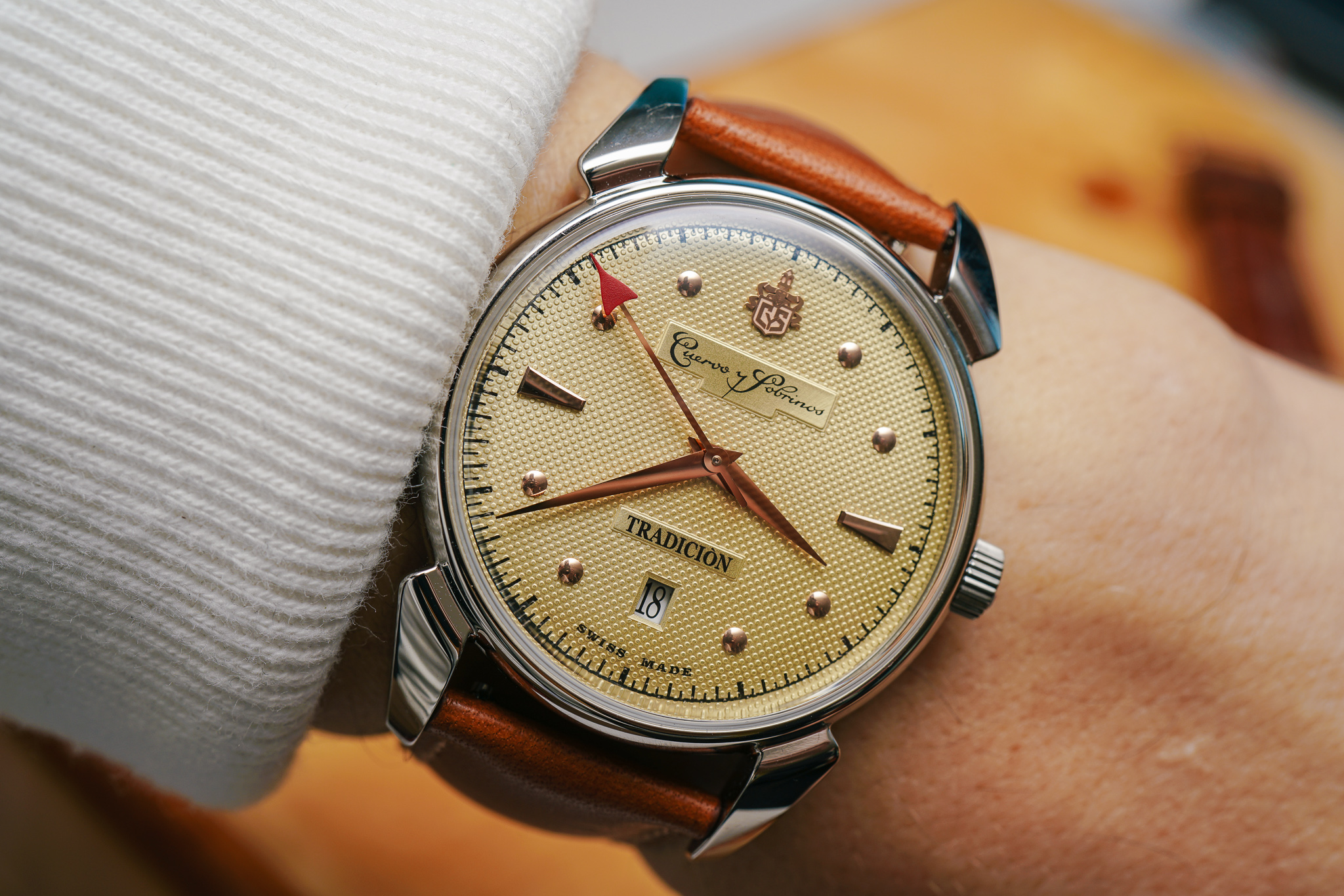 Ernest Hemingway was a Rolex man. For many years, it was famously an Oyster Perpetual, to be precise. But it’s not hard to picture the golden dial of the Historiador Tradición from Cuervo y Sobrinos strapped to his wrist, as the bullfighter, Nazi ass-kicker, and Nobel prize-winning novelist hunches over his old typewriter, pounding out Old Man and the Sea, a fresh mojito undoubtedly within fingertips’ reach while the horn section from a Benny Moré album echoes its brassy chorus from the other room. See, the legendary author was, after all, once a client of Cuervo y Sobrinos (“Cuervo and nephews”) — a retailer that got its start in the late 19th century as the premier jeweler in Havana, Cuba. It was there that the family jeweler sold co-branded Rolex, Patek Philippe, and Longines watches, much like Tiffany has done throughout the years, to discerning clients like Winston Churchill and Clark Gable prior to the Cuban revolution. And as the story goes, one of those clients was also, indeed, Hemingway himself. 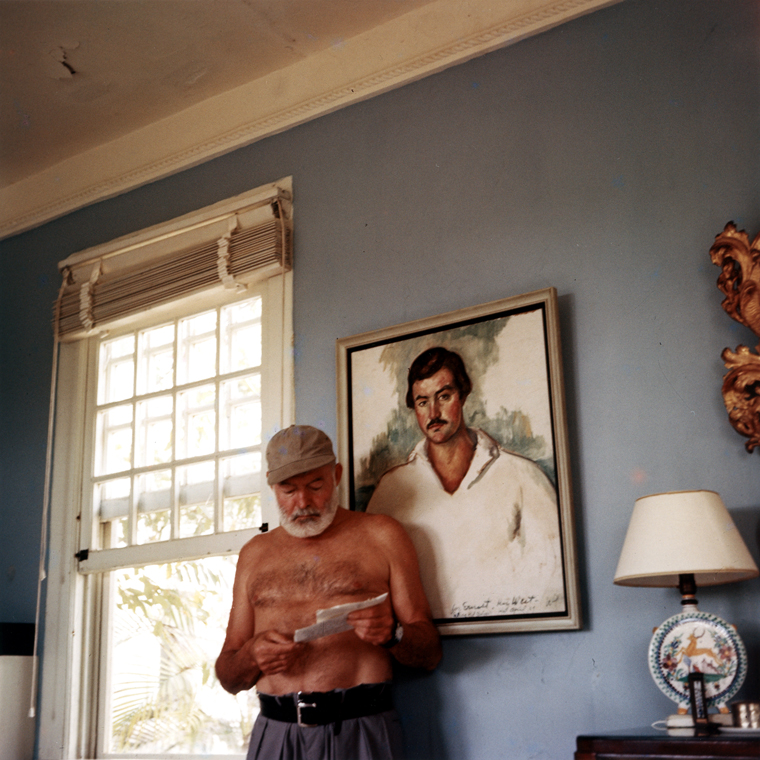 Ernest Hemingway at his Havana home, “Finca Vigia,” in 1953

Now, to be absolutely clear, that doesn’t technically mean Hemingway actually wore a Cuervo y Sobrinos like this Historiador Tradición, it simply means he was a customer of the famed jewelry store, but it does seem highly likely that some of the timepieces he prized over his literary career would have been purchased at the island’s most notable jeweler. Perhaps most importantly, though, the mere possibility that this watch could fit such a narrative speaks to the transporting power of its luscious mid-century aesthetic — one brought back to life by an otherwise little-known Swiss indie. 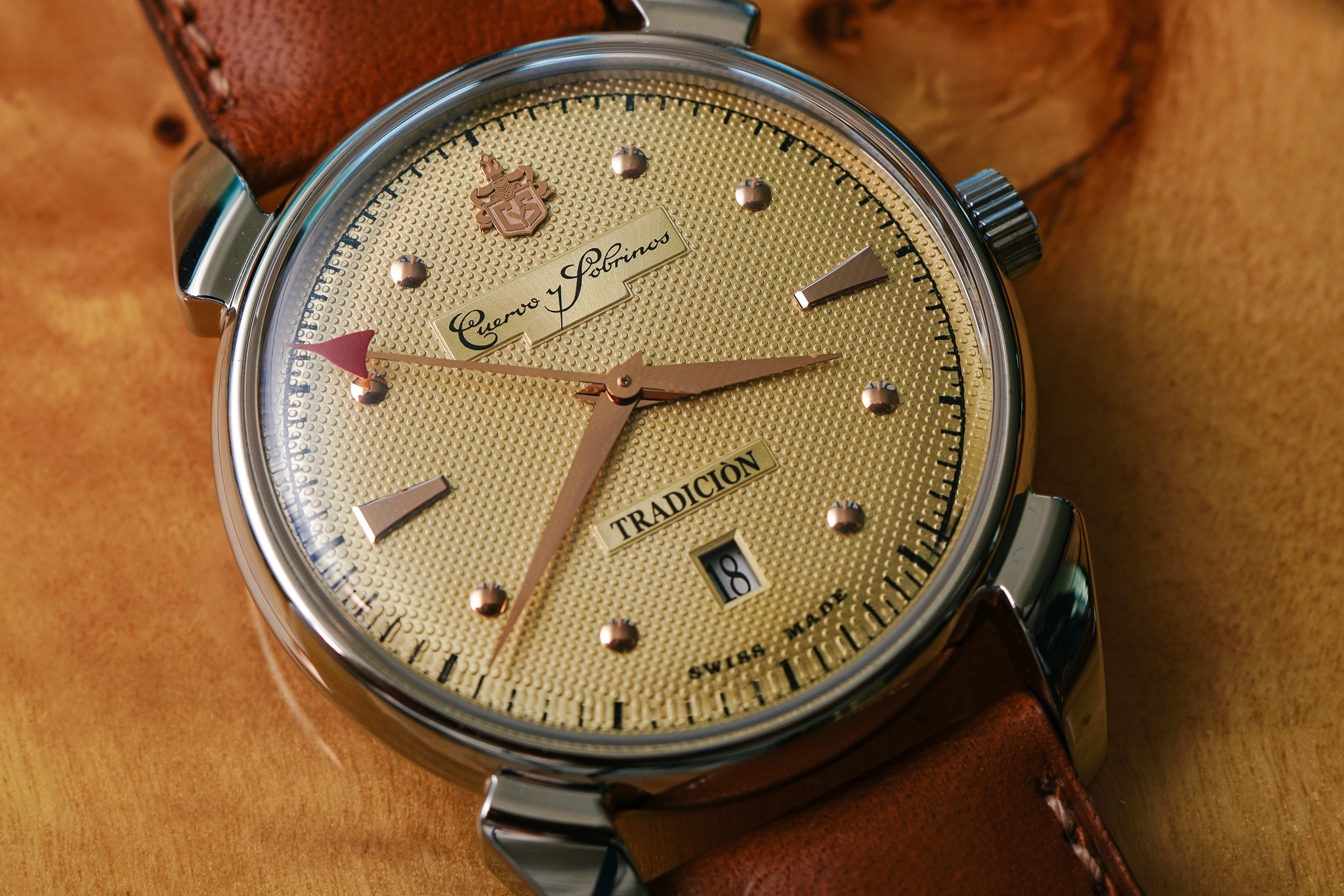 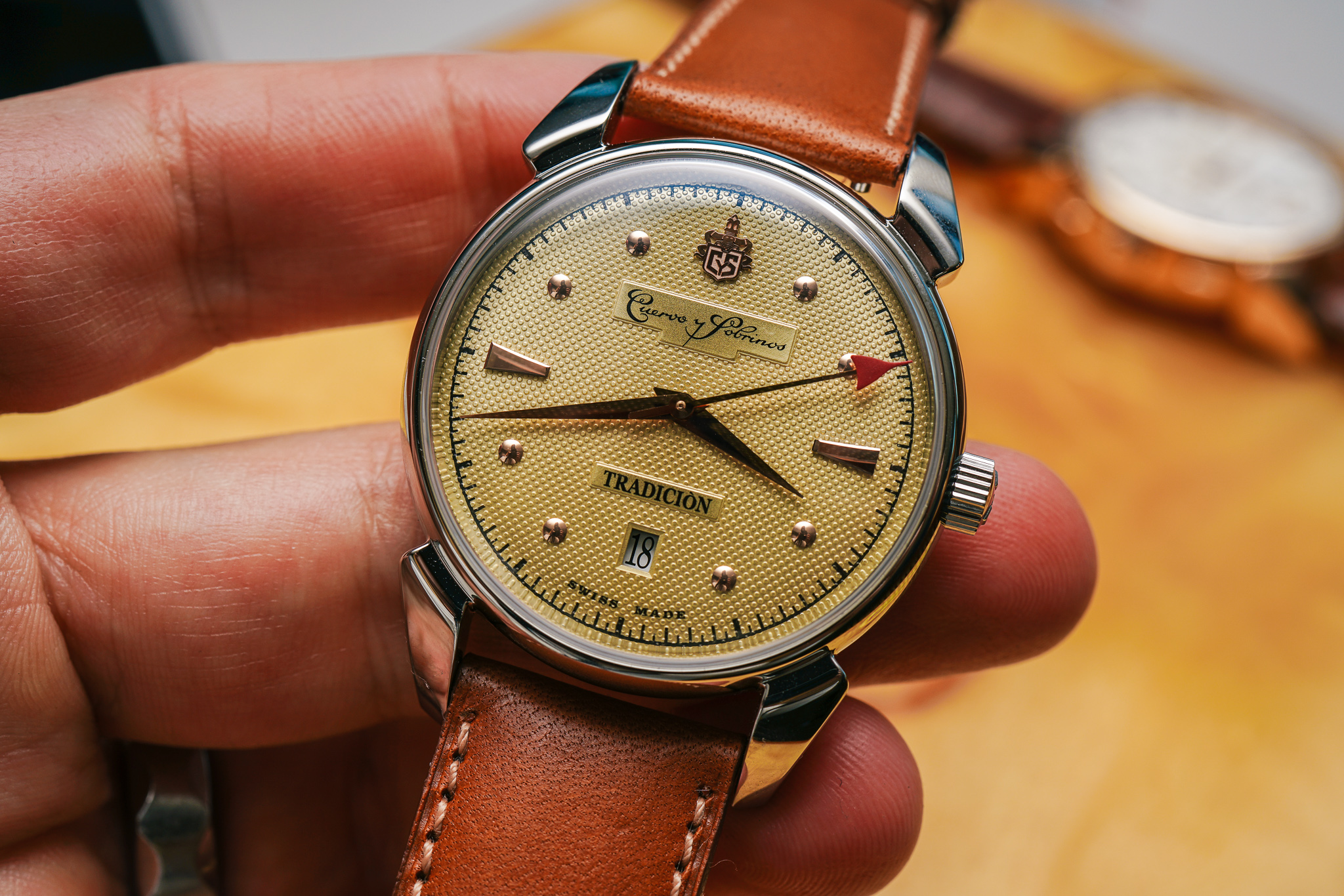 Like stepping off an old twin-engine onto a grassy island airfield and taking in that first deep breath of salty air, there’s an awful lot to absorb when measuring first impressions of the Historiador Tradición when it hits your wrist. Particularly how it could have come from the mind of the designer responsible for the original Vacheron Constantine ref. 6087 but only after an extended holiday in the Caribbean, whereupon correspondence with Switzerland was conducted via lime juice-stained postcards bearing pencil sketches of deeply textured dials and claw-lugged cases. As part of the CyS Historiador collection, the Tradición is an impressive re-issue of a heritage reference, one that represented a very specific period of transitional design in the 1950s when the bold “maximalist” principles of Art Deco were slowly making way to the cleaner aesthetic of mid-century minimalism. It marries the two “just so,” albeit under a light haze of Cuban cigar smoke drifting lazily over a case filled with amber-colored bottles of rum. 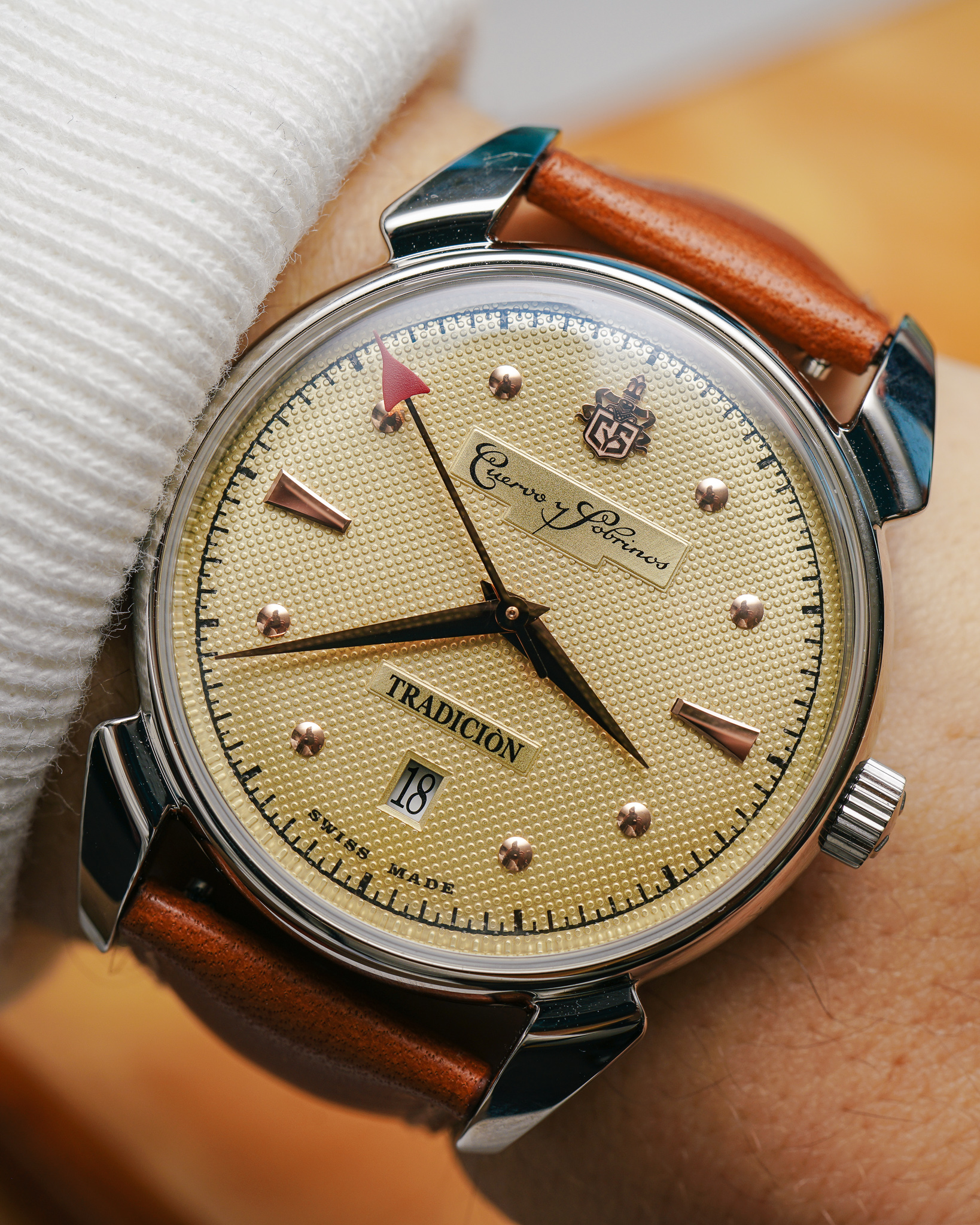 For a watch inspired by a reference that would have once been retailed in the sweltering humidity of the Caribbean, the modern Historiador Tradición’s paltry 30 meters of water resistance and the leather strap are a bit limiting, but I’m otherwise totally unable to fault the rich 1950s aesthetic bubbling beneath the broadly domed sapphire crystal; from the sharply angled trapezoidal hour markers to the grid-shaped “frappage” texture on the dial. Two colors are available: silver, or this the flawlessly replicated “aged honey” color, which I’d argue is the real standout, because it’s sexy and warm and jarring in all the right ways — the timekeeping equivalent to getting on a packed dance floor for the mambo after spending a winter swaying to Mozart. It’s a very distinct sensation that’s an absolute rarity in a period of watchmaking when minimalist dress watches and staid heritage re-issues are starting to get a little long in the tooth. 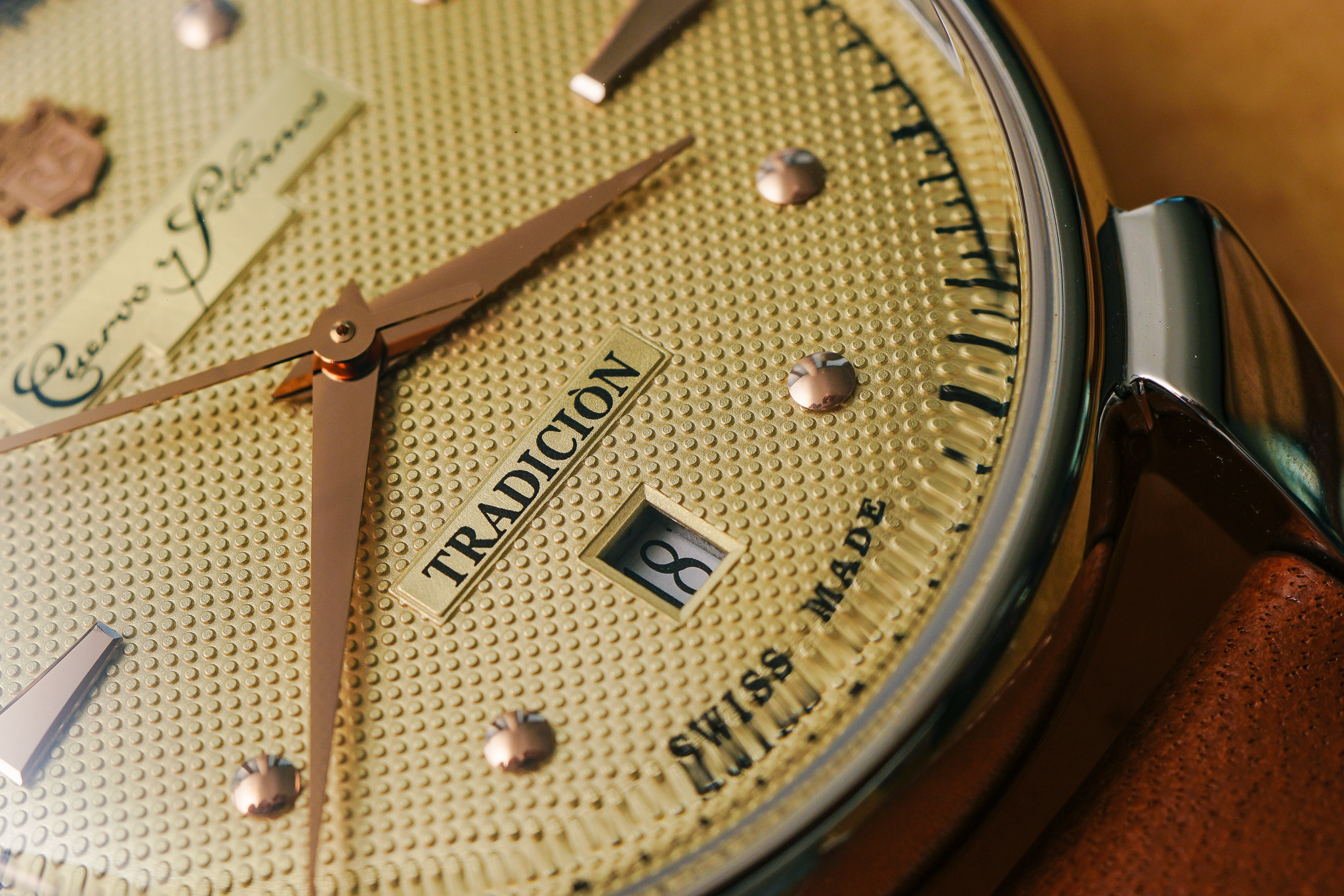 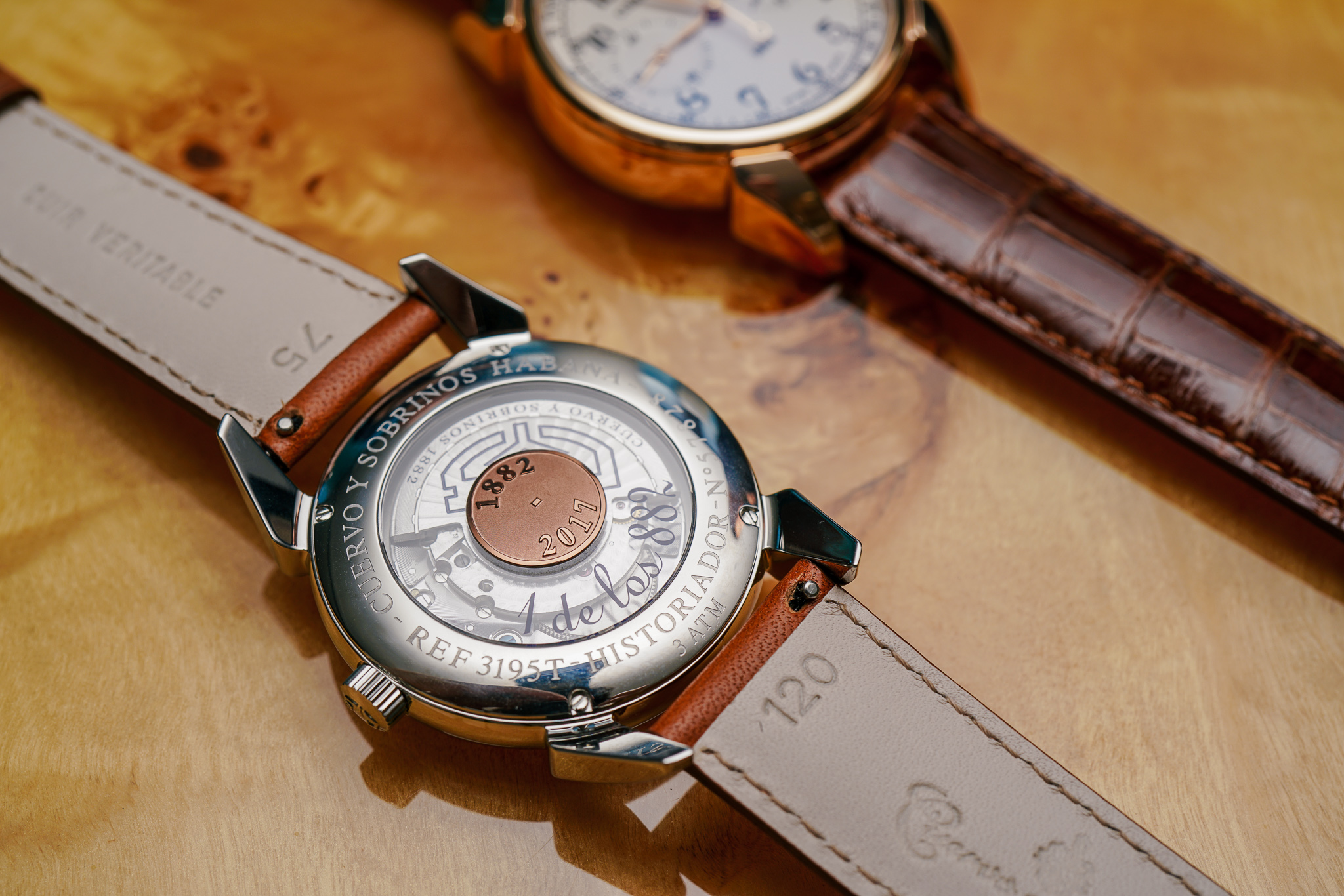 As a re-issue from an archival reference, the new Historiador Tradición increases the case size of its vintage predecessor to a modern 40mm but otherwise remains strikingly faithful to the source material – right down to the bold color and texture blocking, which, kitschy as they may be, are long-time spiritual signatures of the brand. Flip the watch over for a look at a nicely finished Sellita SW300, a 25-jeweled 4Hz automatic movement with a power reserve of around 40 hours and a custom rotor bearing a CyS engraving. It’s worth mentioning this movement isn’t actually powering a new 2020 watch — evidenced by an engraving on the the metal coin in the middle of the exhibition caseback, bearing its 2017 release date, which was when the brand celebrated its 135th anniversary. It’s also worth mentioning that we’re not talking about 135 years of uninterrupted production. Cuervo y Sobrinos fell victim to the intense political upheaval during the Cuban Revolution in the 1950s and wouldn’t return for some 40 years when it was revived in the early aughts by an Italian watch and jewelry distributor. Just as it was around the turn of the last century, though, the brand’s watches are still produced in Switzerland, completing an interesting international trifecta of interest around its decidedly Latin American roots. 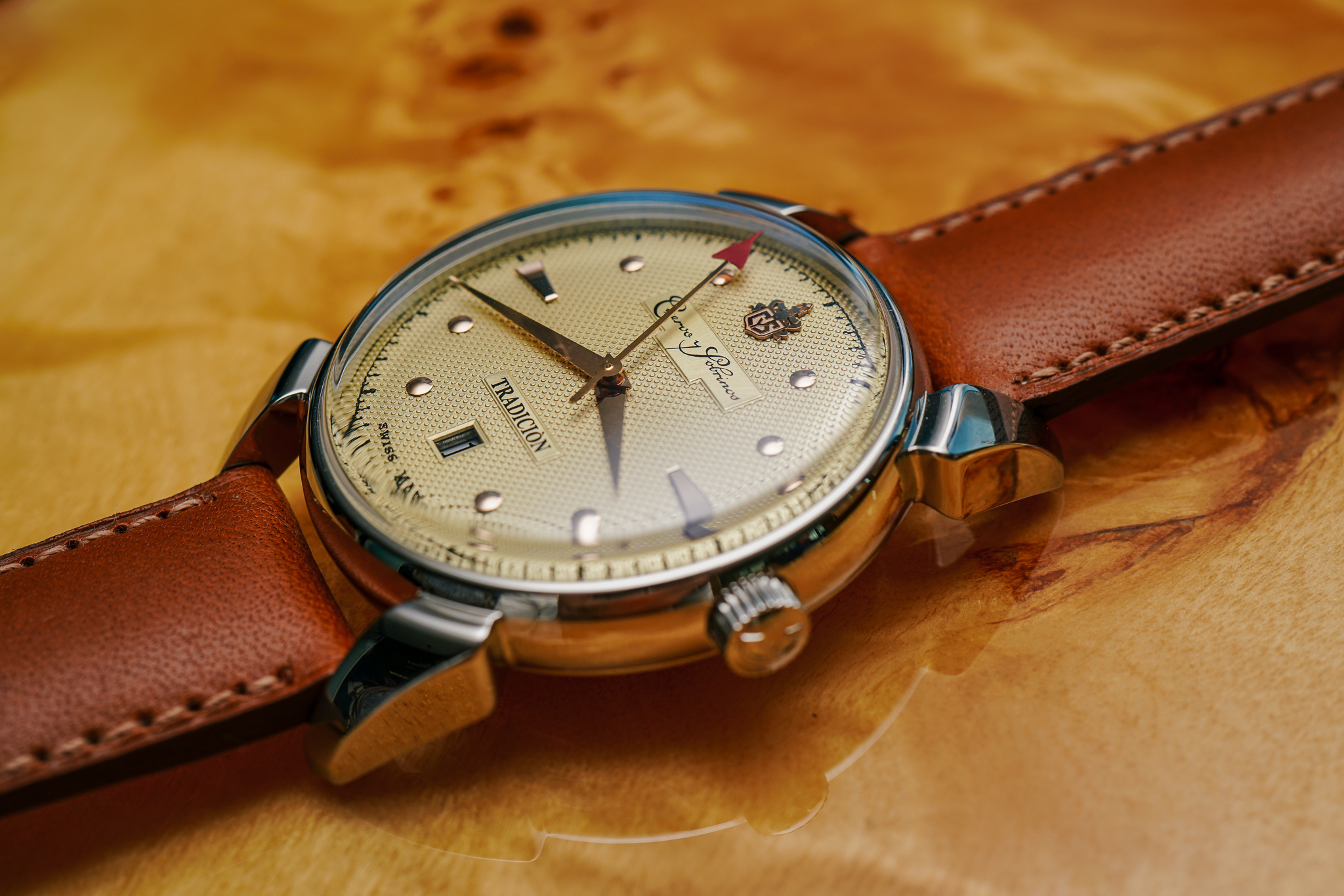 Limited to 882 pieces, the (probably) Hemingway-approved Cuervo y Sobrinos Historiador Tradición (ref. 3195.TR.C) has a price of 3500 CHF (or around 3,600 Cuban Pesos, if you’re joining us from Havana). And if the watch didn’t scream “Cuban” enough already, this particular reference ships in a custom-built humidor made from cedar wood. Learn more at cuervoysobrinos.com. 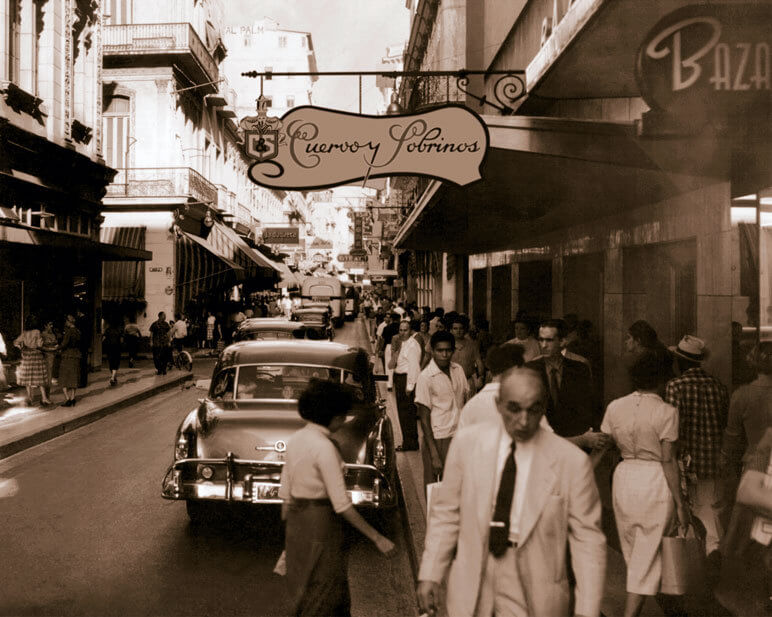