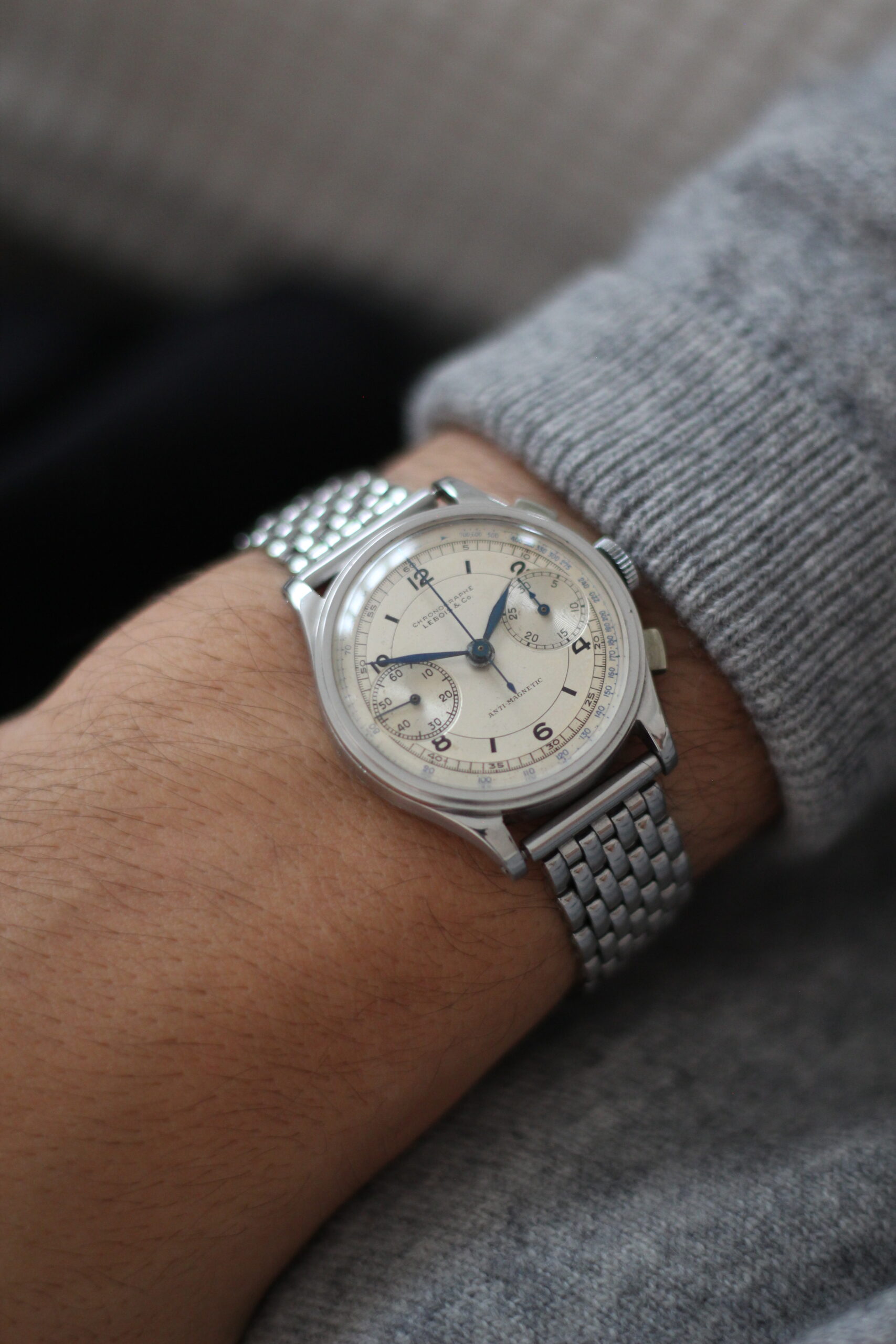 11 Comments
by SponsoredPost
Sponsored post presented on aBlogtoWatch by advertiser

Like any gathering of passionate enthusiasts, particularly online, the niche world of watch collecting is a vibrant and outspoken community full of knowledgeable aficionados and those eager to learn. For watch brands, this energy manifests in the form of comments, memes, reviews, videos, podcasts,and forum posts. Seeking to harness this ardency for timepieces is Lebois & Co. This revamped brand, rather than shy away from internet involvement, has developed a new CoLAB platform which allows the community to engage in the designing and building their first piece, the new Heritage Chronograph.

Based in Amsterdam, Lebois & Co is just one brand of Compagnie des Montres Lebois & Cie, an umbrella company achieving its goal of reviving watch brands lost to the sands of time. Along with the aforementioned Lebois & Co, it is also responsible for the return of the Airain Type 20, a legendary piece favored by the French Airforce. Having successfully launched two entirely new models through Lebois & Co (the Venturist and Avantgarde), the CoLAB platform and Heritage Chronograph project represent a first foray into direct engagement with those who comprise the watch community. By heeding the voice of each and every individual interested in the creation process, not only is client buy-in emboldened, but Lebois & Co directly benefits from the acumen of individuals eager to share. 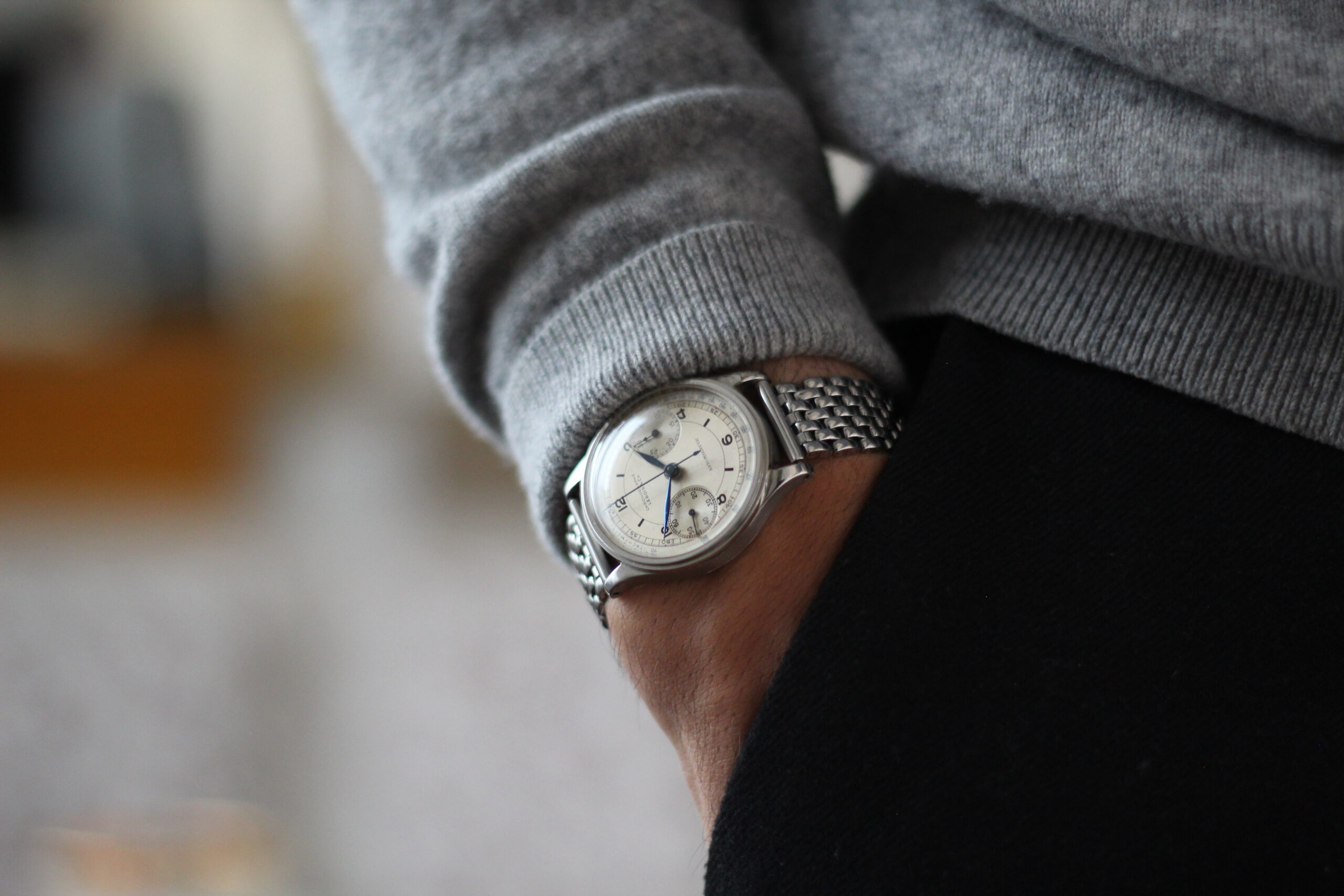 The reintroduction of Lebois & Co came exactly 80 years after the company was founded by Raymond Dodane in 1934. With heritage steeped in aviation, chronograph models were gifted to Swedish Air Force Pilots when they retrieved their Caproni Ca 313 reconnaissance bombers from Italy in the mid-1940’s. Having collected a number of vintage chronograph examples since 2014, Lebois CEO Tom van Wijlick seeks to recreate this generation of design through the CoLAB platform. Though the brand lay dormant for four decades, there is a multitude of classically styled chronographs in the Lebois & Co backlog. Most exciting of all, you can cast your vote in order to manifest the exact timepiece you would like to see to ultimately produced. 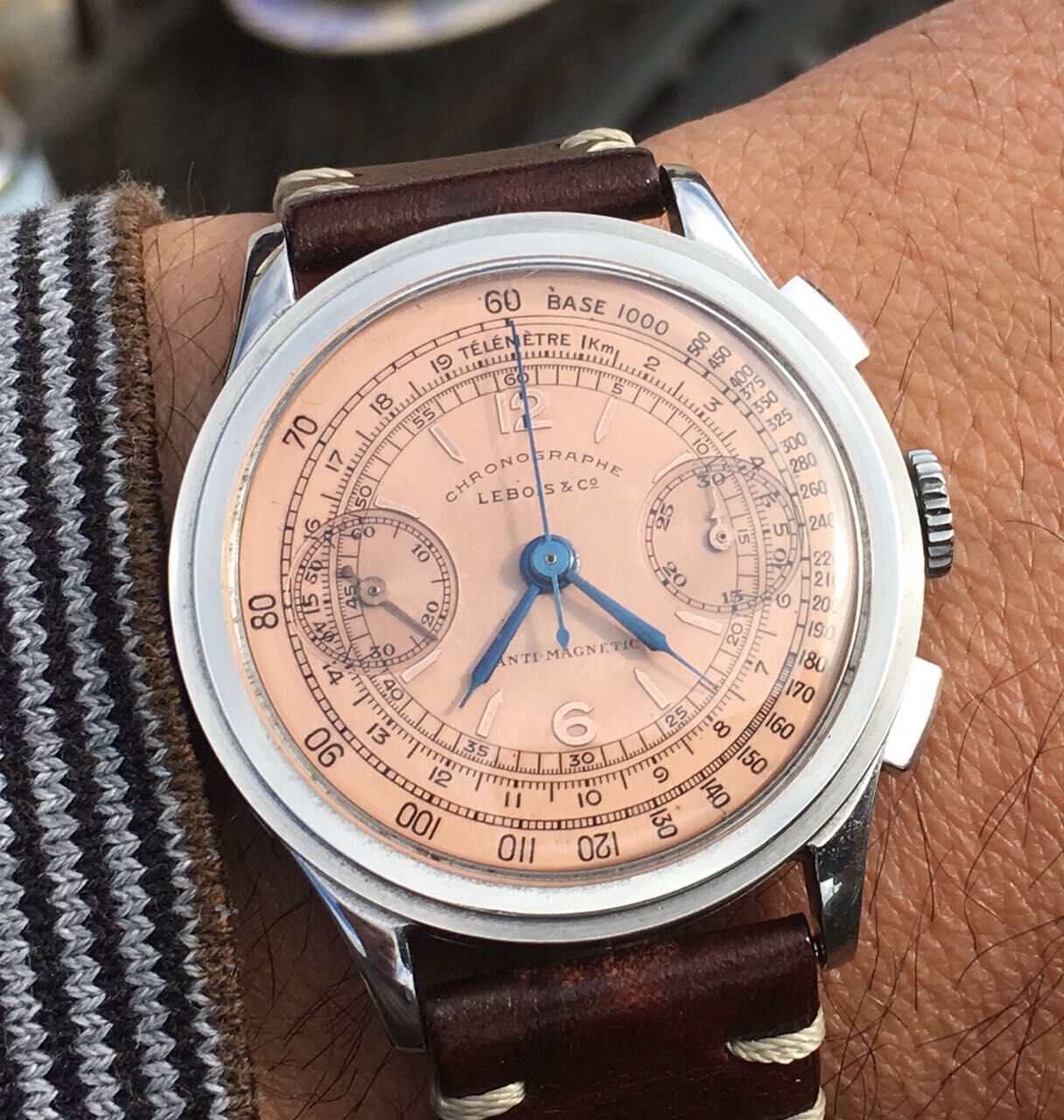 Officially launched on April 22nd, 2021, the CoLAB Heritage Chronograph project currently rests in the initial design phase. This stage of the process consists of various dial and case combinations, movement options, and the preferred inclusion of bracelets or straps which are subject to community voting. What this means for you as an enthusiast, is that you can provide insight by signing up to join the community and placing a vote on the combination that most closely aligns with what you would like to wear.

At the moment, CoLAB subscribers have the choice of nine different vintage dial variations. Among this bevy of beauties are fan-favorites such as the Salmon dial, which features blued hands, tachymeter, and telemeter scales. The cream-dialed option (number five on the site) features blued leaf hands along with red and blue outer scales. This particular option was actually the exact model that inspired Lebois & Co to release the Heritage Chronograph. A similar example was later discovered and purchased from a U.S.-based collector. The remaining dial options range from gold cases and gilt accents to the classic “sector dial” that gained popularity in the 1940’s and remains a timeless choice today. 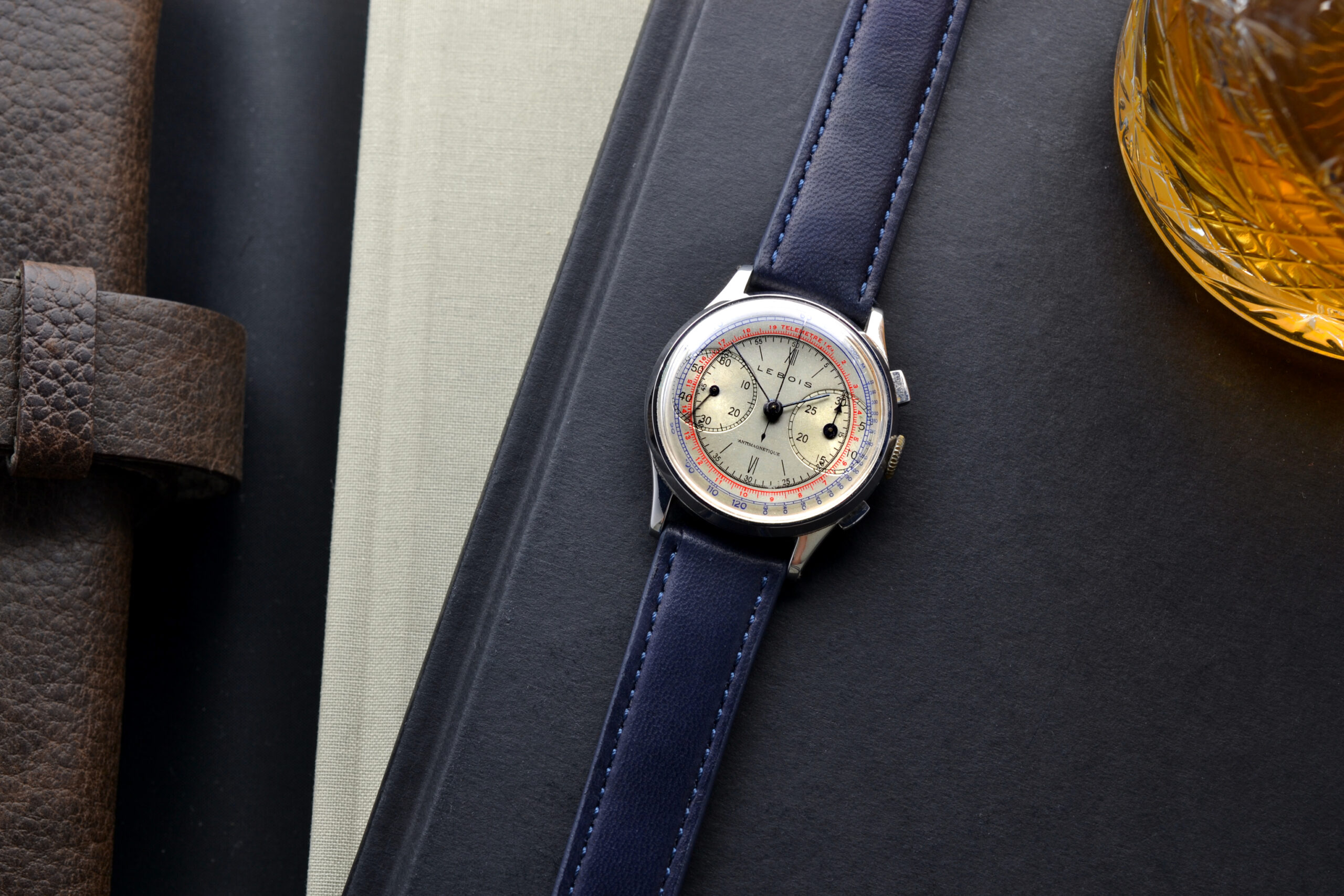 In addition to dial options, voting is currently underway for a duo of potential movements to power the Heritage Chronograph. The cam-actuated choice provides more affordability, but in the process sacrifices historical accuracy and exclusivity. On the other hand, the column-wheel Caliber LC-450 powerhouse offers increased precision and exclusivity, albeit at a slightly higher cost. The estimated retail price of each piece is $1,930 USD and $2,220 USD, respectively, depending upon which of these designs reigns supreme among the vox populi.

Once the CoLAB community indicates its top choices for the Heritage Chronograph, the team at Lebois & Co will generate designs, followed by three-dimensional renderings of the favored picks and open up color and strap choices to the masses. Democracy will reign and these design decisions will be determined. This will allow the team to begin prototyping, followed by final production, which is tentatively projected for the end of the year. Throughout the entirety of the process, CoLAB subscribers are encouraged to not only vote, but to provide constructive feedback. For some caffeinated conversation, feel free to join the Lebois & Co team (along with each other) for virtual coffee meetings that allow for a real-time java-powered think tank. 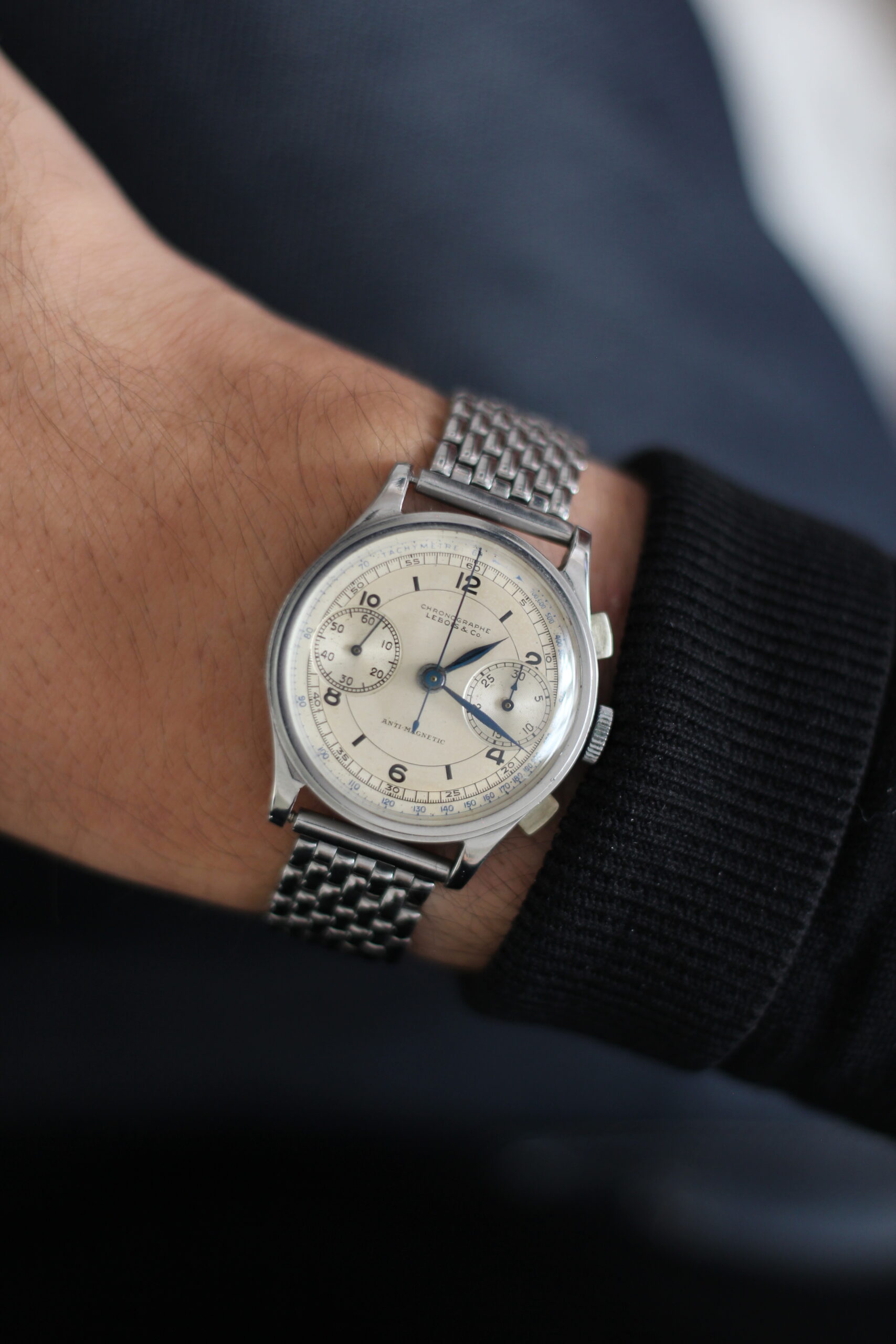 There is no denying that the microcosm of watch enthusiasts is full of zealous opinions and detailed scrutiny, but what hobby isn’t? However, rather than disregard or turn a blind eye to this feedback (as so many brands seem to do), Lebois & Co is dead-set on tapping into the underutilized energy that is horological fandom.  So what are you waiting for? Head on over to Lebois & Co’s CoLAB site and join the crusade by subscribing. After all of those hours you have logged poring over articles and engaging in spirited forum debate, this is your chance to apply that expertise and help bring a currently conceptual chronograph to life.