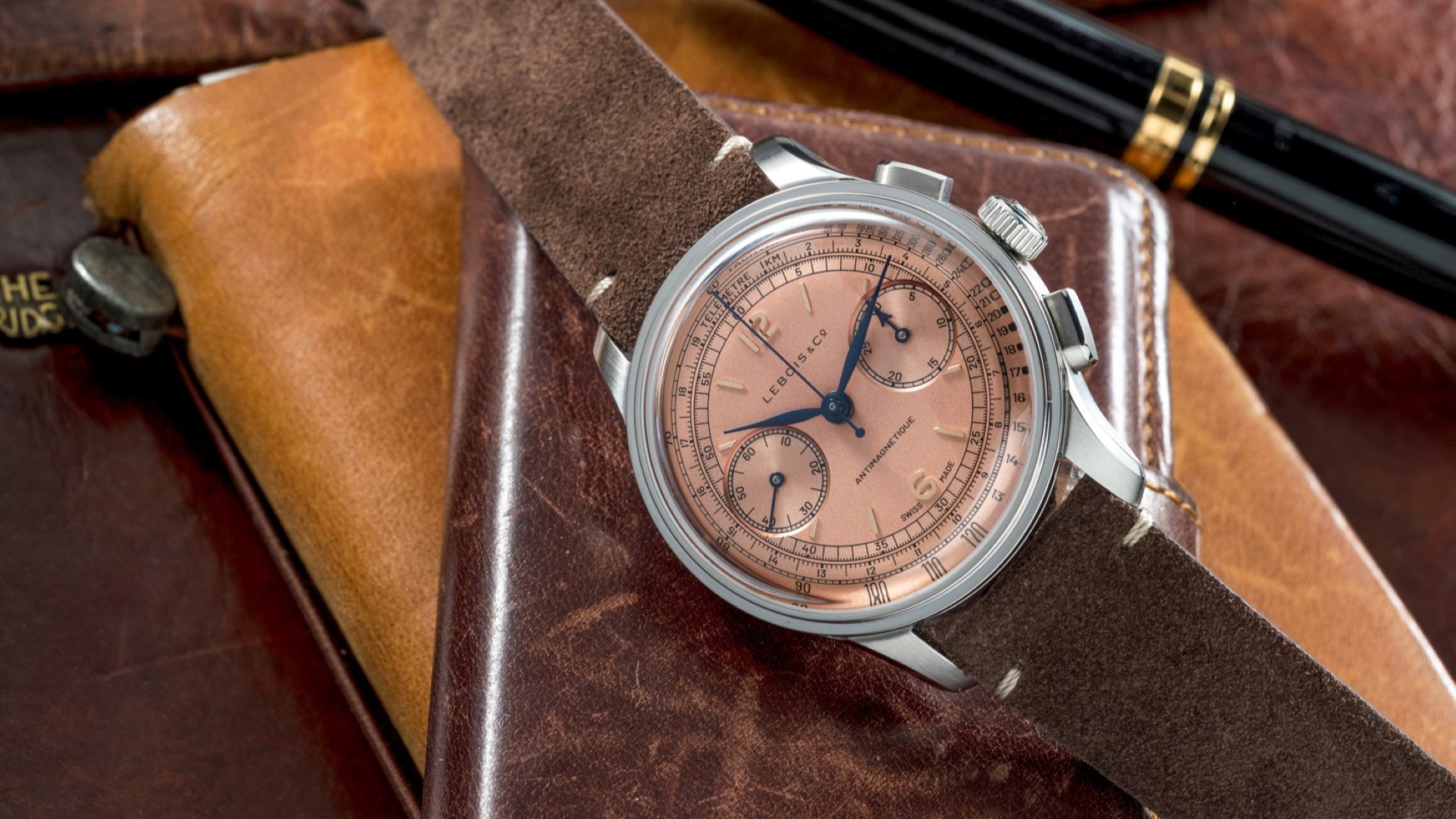 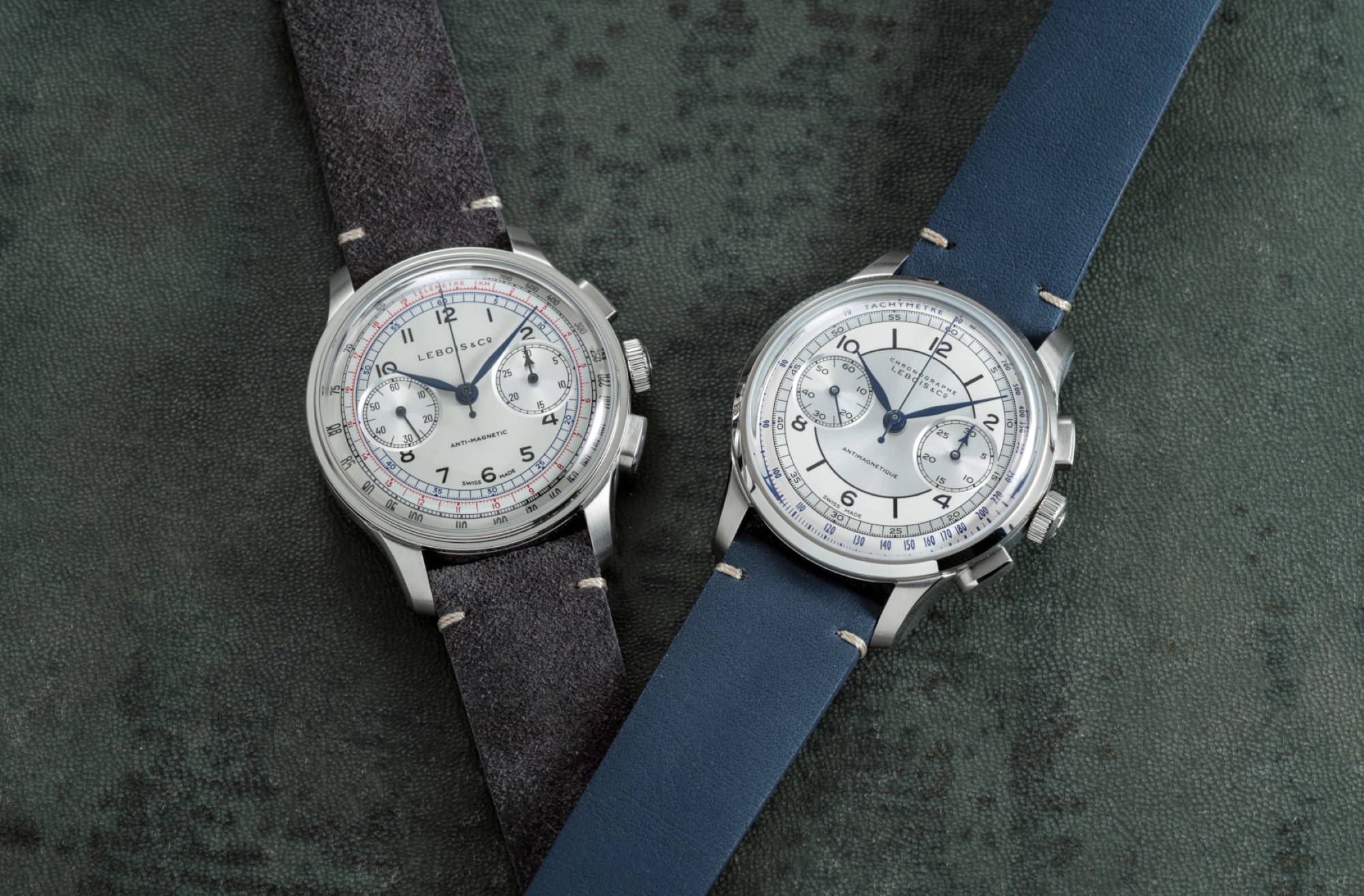 Another vintage-inspired chronograph may not get you humming. They’re becoming more and more common during this renaissance of retro watch design we seem to be experiencing. To have any chance of standing out, a new model has to do something different. Proper heritage helps, and good design helps even more. But those things are easier than you may expect to conjure up—with the right amount of money you can buy a dead brand and hire a good designer. How does a brand push beyond that? When we’re talking about smaller brands, they benefit from two things that can be easily leveraged: nimbleness and a direct connection with consumers. Lebois & Co has taken full advantage of being a small brand with its newest model, the Heritage Chronograph.

Lebois & Co was originally founded in 1934 by a member of the Dodane family (best known for the watch brand of the same name), but like so many other brands, it fell victim to the quartz crisis, shuttering in 1972. In 2014, though, the brand was brought back to life—long before it was trendy to do so—by Dutch entrepreneur Tom van Wijlick and his wife after they had stumbled upon a vintage 1945 Lebois & Co chronograph listed by Christie’s two years prior (Van Wijlick has also revived Airain, with both brands existing under parent CDMLEC). The watch was from a critical time in the brand’s history, when its watches were on the wrists of Swedish Air Force pilots. The first two watches from the brand, including the Venturist, were decidedly modern designs—but that old Lebois & Co chronograph was always on Van Wijlick’s mind. After those first two models, the allure of that 1945 chronograph was too strong: It was time for the brand to get back to its roots. But Lebois & Co has a rich history of beautiful chronographs; the Christie’s model wasn’t some one-off chrono — there were dozens. How could anyone choose just one? 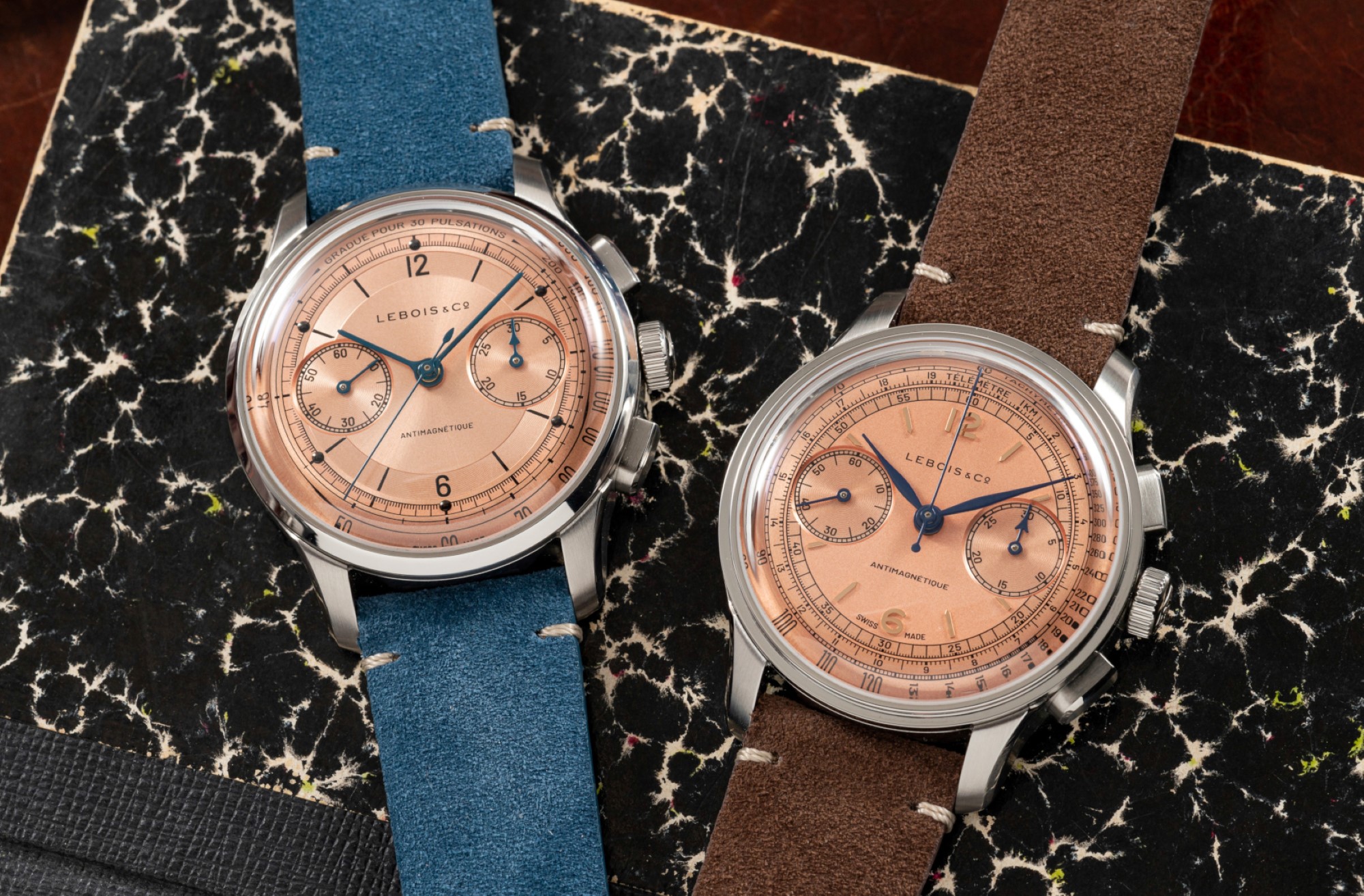 Well, that’s where Lebois & Co got creative and capitalized on being a small brand. In a process the brand is calling CoLAB, potential buyers voted and determined not just the main inspirations from Lebois & Co’s archives, but the movement, case design, and dial designs that would ultimately be the Heritage Chronograph lineup. Step 1 came in April 2021, with votes on which models were to be drawn on for inspiration and what movement would be used. Step 2 in July 2021 built off the results of that voting and asked participants to vote on the case design and dial designs. In December 2021, Step 3 saw renders revealed and pre-orders opened.  Now, with Step 4, Lebois & Co has received and revealed the production prototypes—four models in all—and opened its second round of preorders. 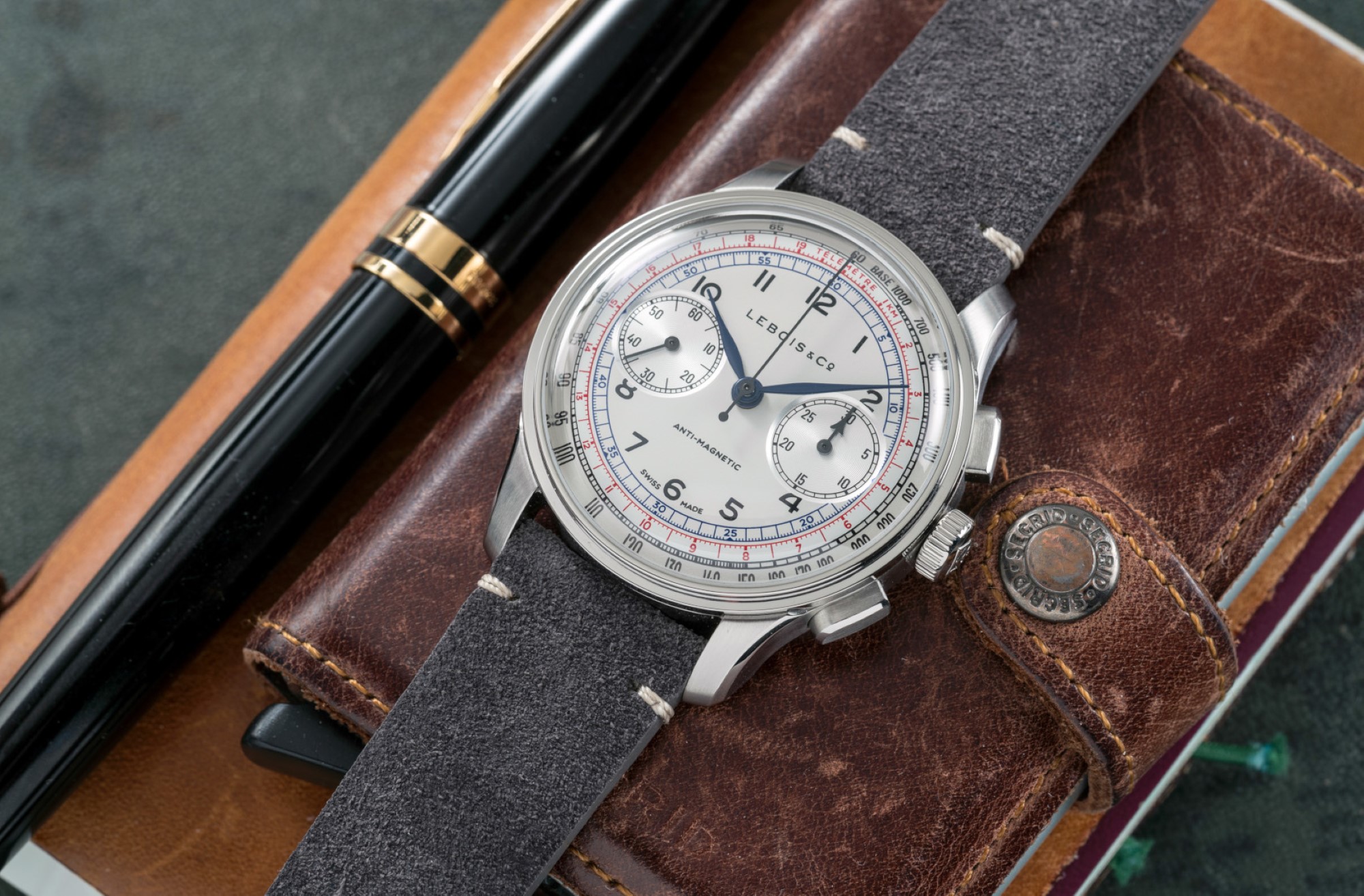 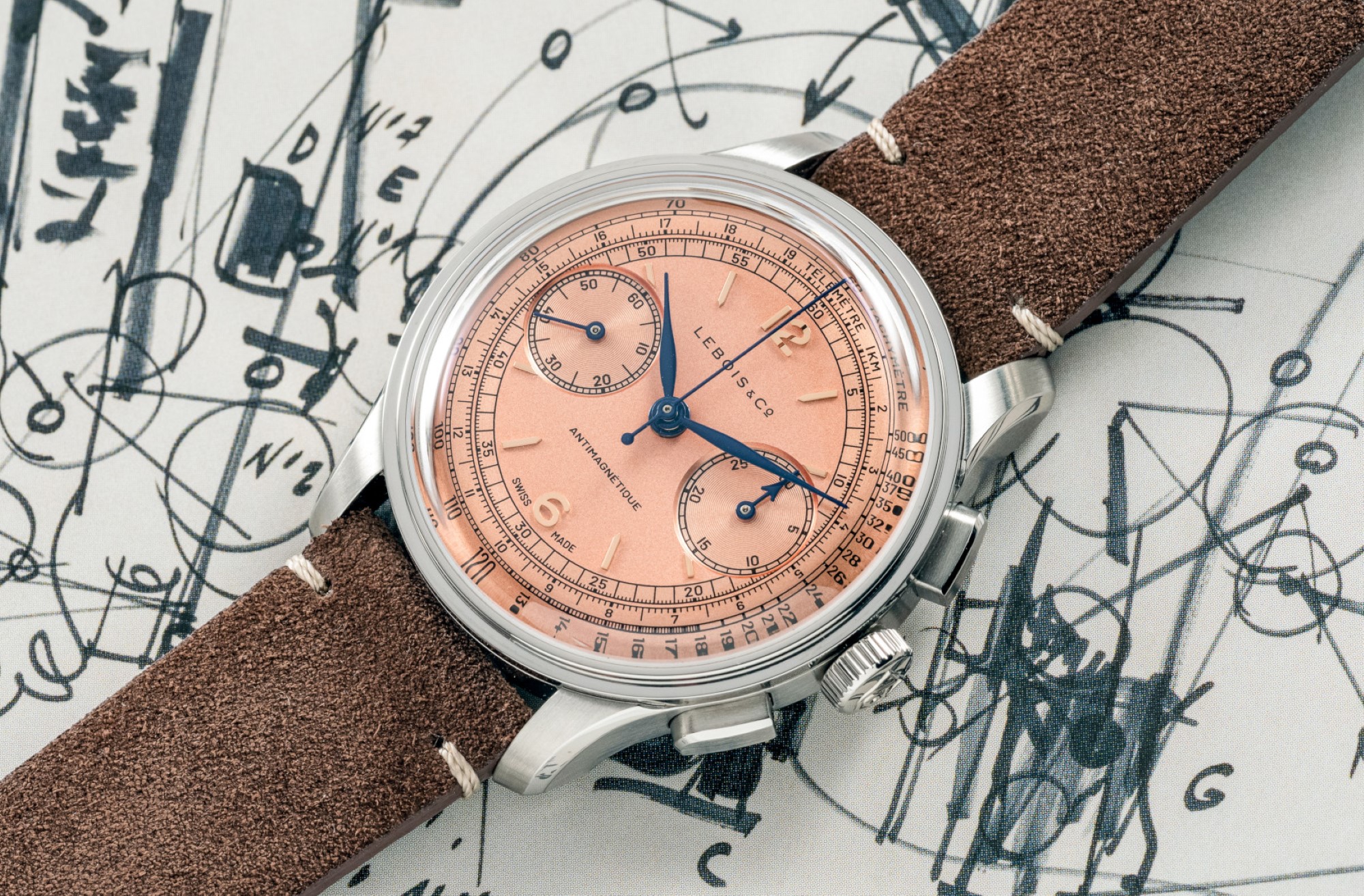 The first and perhaps most daunting task for the brand—and its fans—was to scour the world for vintage Lebois & Co chronographs and find inspiration. The brand did the initial work: It found nine candidates, ranging from a silver dial with multi-colored scales to a black dial with gold everything. But the standout was the salmon dial, which garnered almost as many votes as the next two dials combined. Ultimately, the brand landed on two salmon dials, a cream dial, and a silver dial. Though at a glance the dials may seem like two versions each of two dials, there are subtle variations that provide four discrete options, offering something for everyone. What the dials all have in common is their blued handsets (either leaf- or baton-style), sunken circular-grooved 30-minute chronograph and running seconds subdials with railroad style markings, and the restrained dial text with the redesigned brand name at 12 and the “ANITMAGNETIQUE” or “ANTI-MAGNETIC” at 6 (the watches are tested to the ISO 764 standard established in 1973 and used by the industry since). 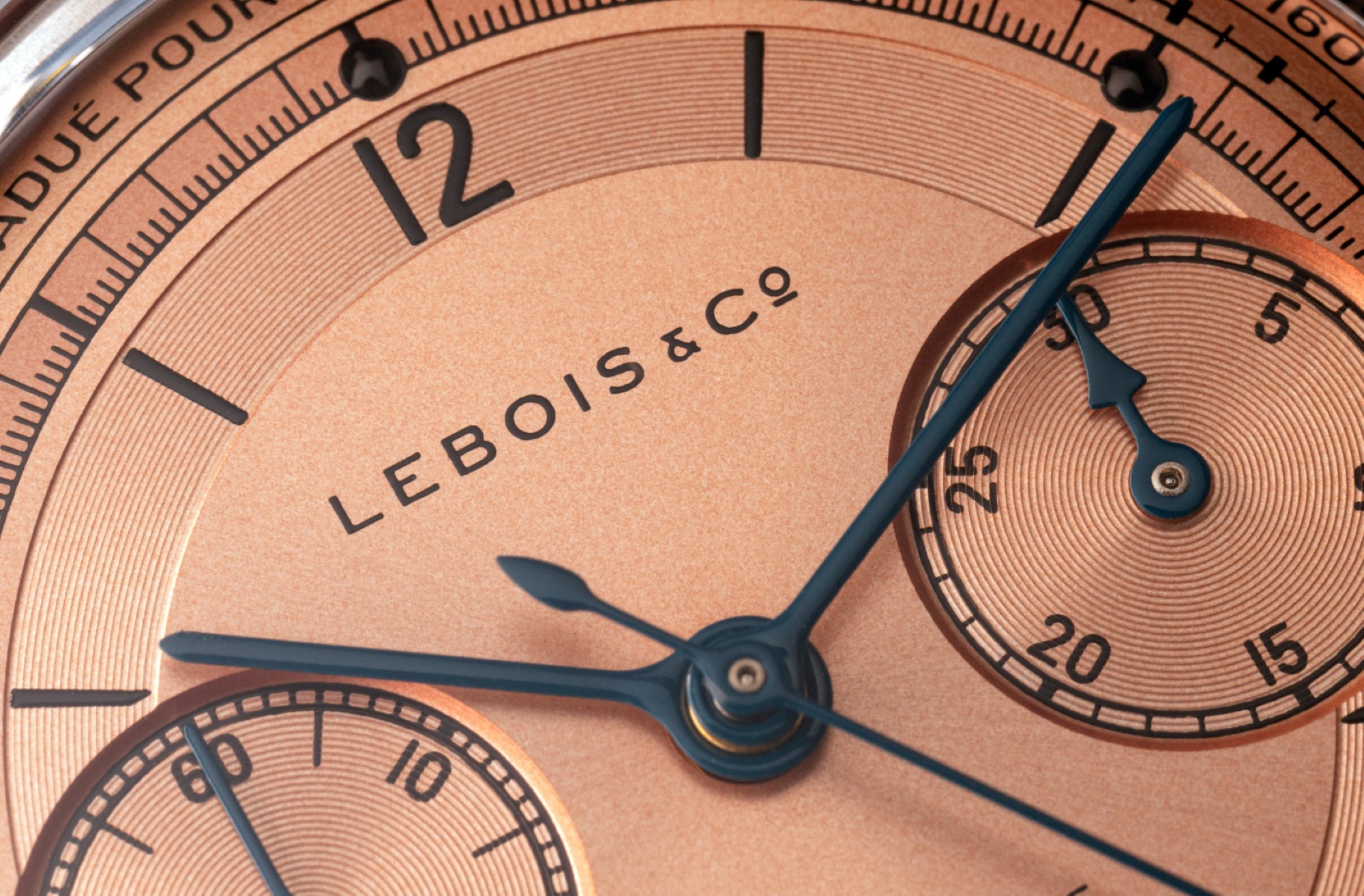 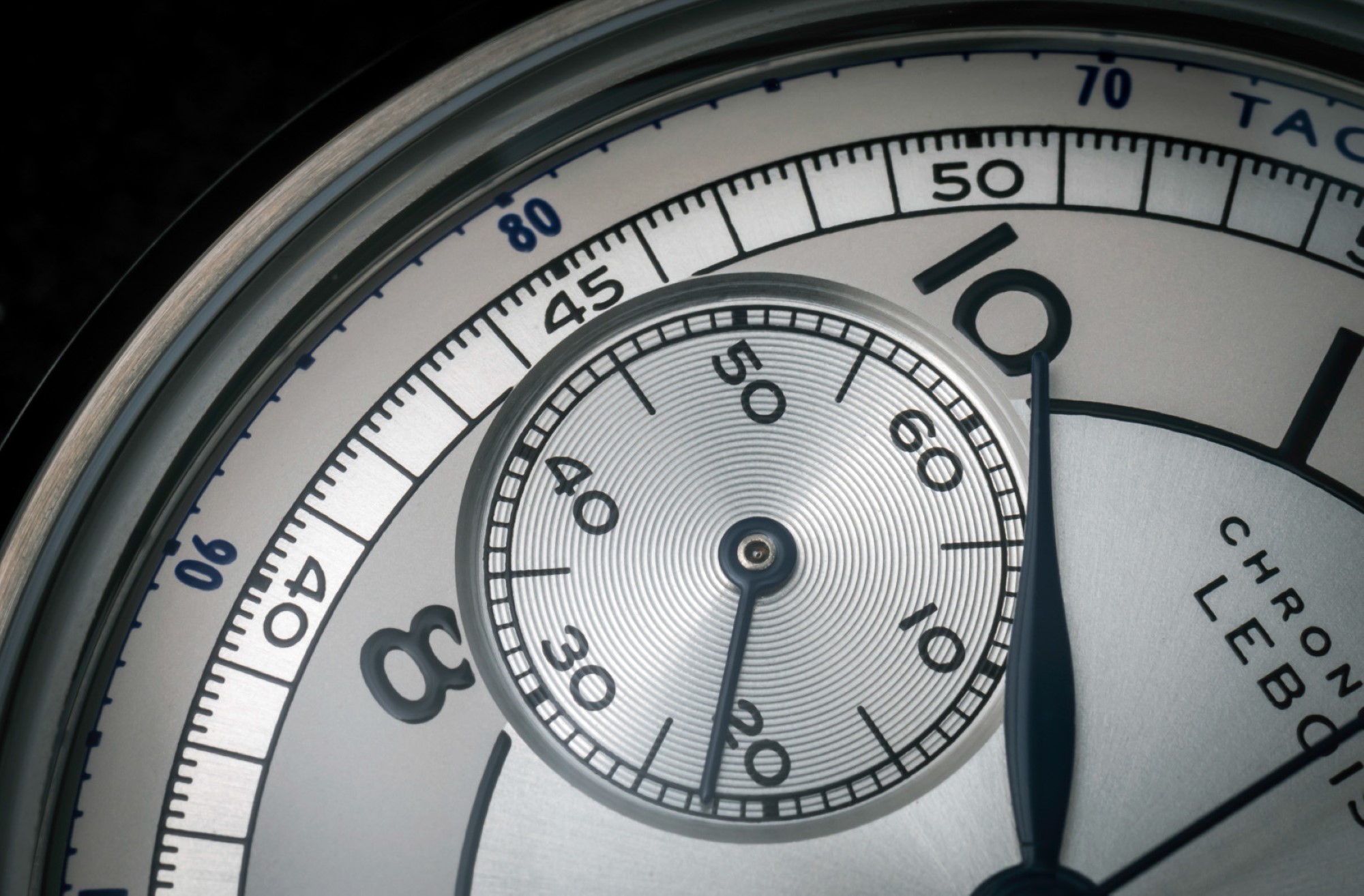 As mentioned, the brand ultimately landed on four distinct dial designs inspired by models from the past. In the striking salmon dial, buyers have the option of either a pulsations scale or a dual tachymeter/telemeter scale. The former features a sunburst center dial, a radial grooved hour track with printed black indices, heavy black pips at every second hour, and slim baton hands; the latter offers a sandblasted center dial, applied gold indices, and leaf hands. The third offering has a subtle silvery cream dial with black tachymeter scale, red telemeter scale, and blue minuterie, with the same blued leaf hands; this model most closely resembles the Christie’s model that started Van Wijlick on this entire journey. The final offering is also the most restrained: a silver dial with sunburst center, black printing, and a blue tachymeter scale. The final four dials are not only representative of Lebois & Co’s deep history of chronograph watches, but they also manage to capture the history of mid-century chronographs writ large and offer an option for every enthusiast. 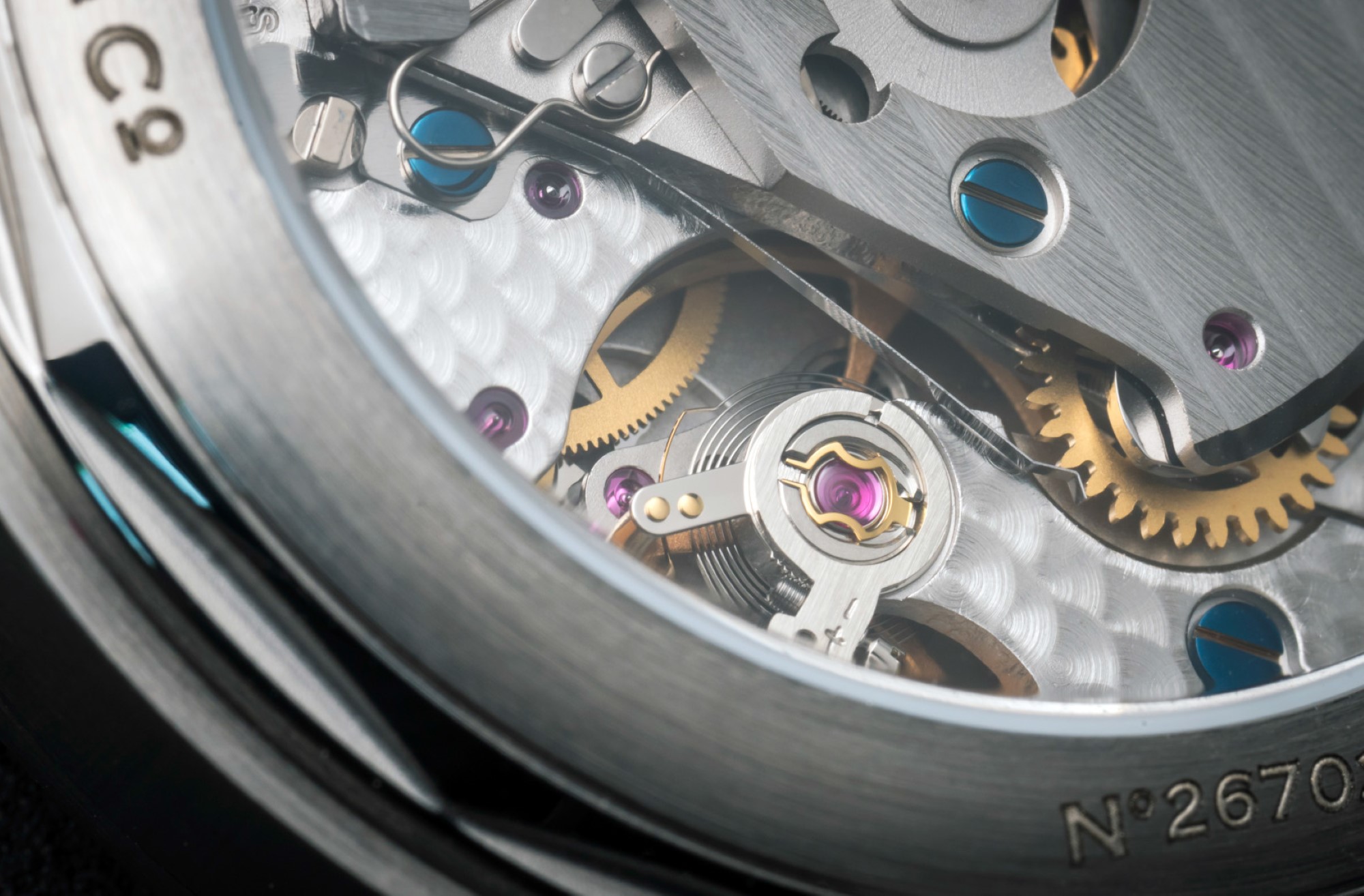 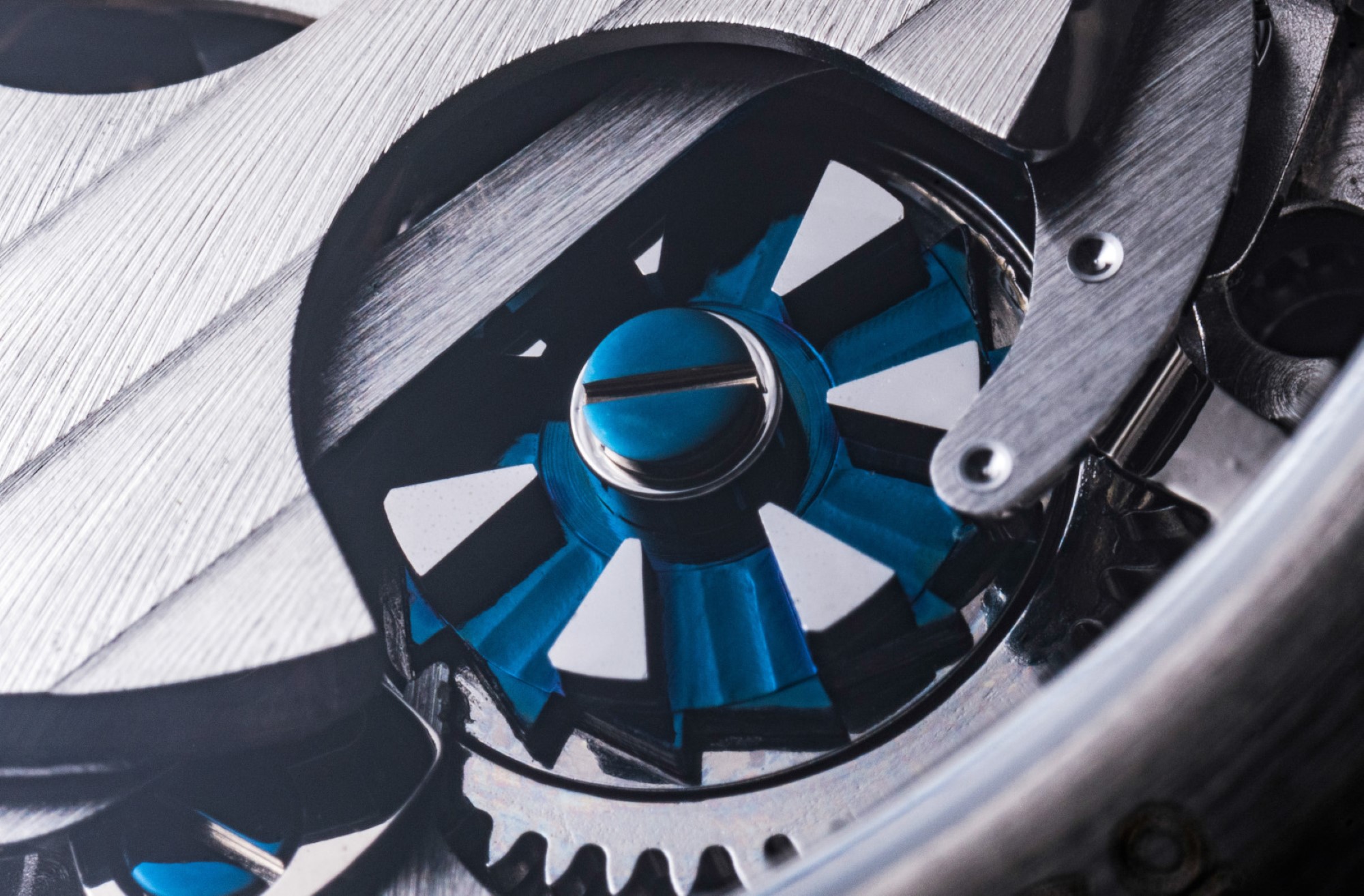 While most brands would try to nail down their case design simultaneously with their dial designs, the realities of movement acquisition meant that the caliber had to be chosen at the same time as the dials. Lebois & Co could’ve easily made this decision for themselves, but the brand saw two equally viable options: a more affordable, mass-market chronograph, or a lower-production, historically accurate caliber. The brand knew which direction it wanted, but it also had committed to a process of community collaboration, and so this, too, was put to a vote. Fans had the choice of a cam-actuated chronograph movement from ETA or Sellita or a column wheel chronograph from La Joux-Perret similar to the Valjoux 22s and 72s found in the old Lebois & Co chronos (and already used with CDMLEC’s other brand, Airain, and its Type 20). While the LJP caliber was truer to the original watches, it would also make the watches about $300 more expensive. But if you thought $300 would scare off watch enthusiasts, you’d be wrong. Very wrong: The column wheel caliber from LJP received almost 20 times the number of votes as the alternative. The decisive outcome meant the watches would be equipped with a more exclusive movement with mechanics prized by collectors and enthusiasts for its smoother operation and durability. 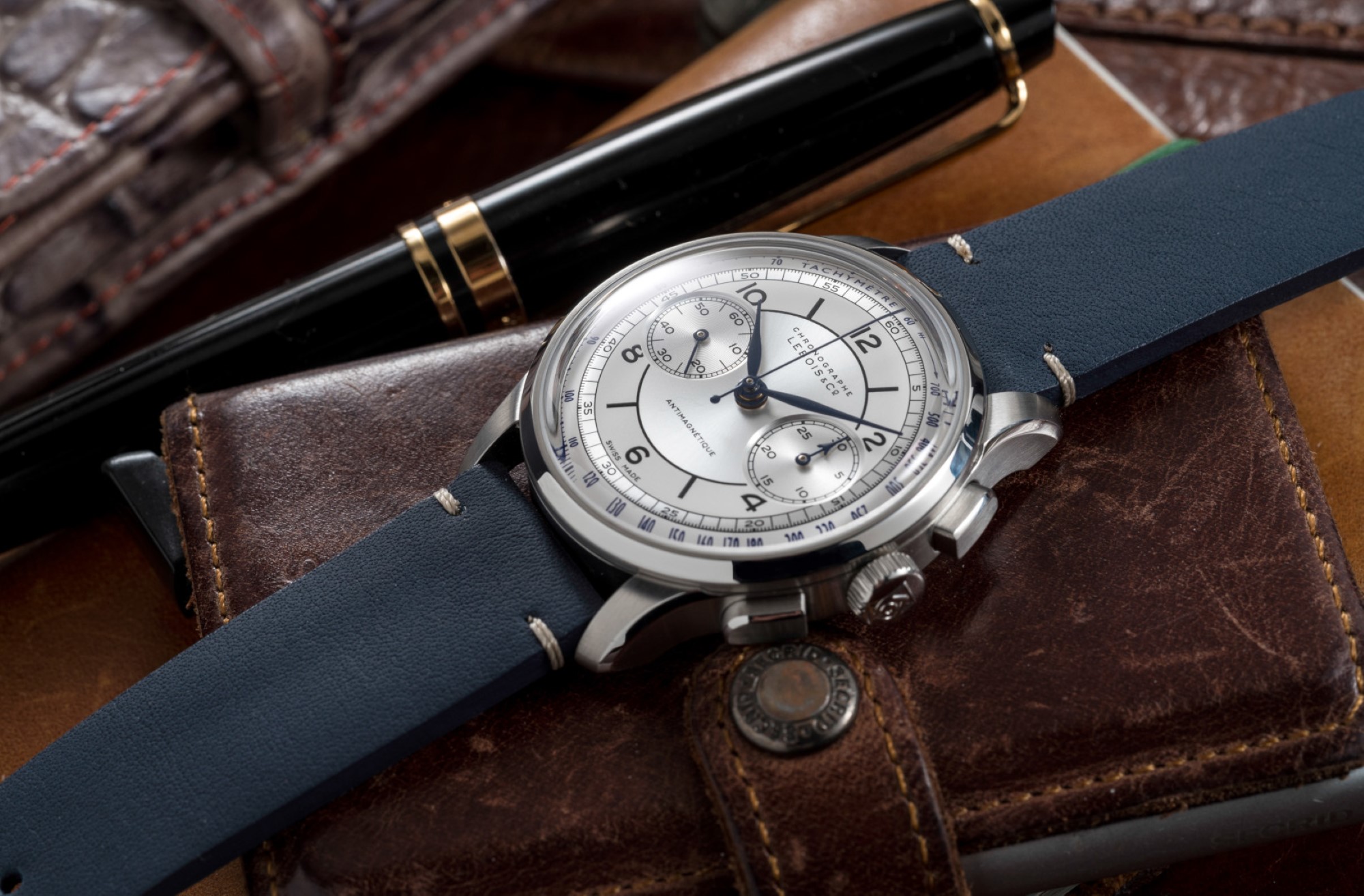 On it was, then, to the case. As divisive as dials can be, getting the case wrong can just as easily ruin an entire collection. The brand knew a few things going in: The designs would be suggestive of vintage cases, with a domed crystal and elegant lines, but with the understanding that it is assuredly a modern timepiece. The crystal would be sapphire, there would be a sophisticated balance of finishes, the watch would feature modern dimensions, and it would have a respectable 50m of water resistance. The brand’s designers worked up three options: two cases with different styles of straight, faceted lugs, and one with curved lugs. Much like with the voting for the movement, it was a blowout, with the curved lugs taking almost 2/3 of the vote. The final case measures 39mm-wide, 13.9mm-tall, and has a lug-to-lug of 47.35mm. While eminently wearable, it’s also finished to exacting standards to add beauty to the comfort on the wrist. The case features a blend of horizontal brushing, circular brushing, and polishing, while the crown ups the ante with sandblasted accents. While pushers are often an afterthought, that wasn’t the case here. They feature finishing to match the rest of the watch, but most importantly, have a profile that follows the curve of the lugs. There’s one more subtle thing to mention, and you may not catch it at a glance: the four models feature two different bezels. The salmon pulsations dial and the silver tachymeter dial will both feature beveled bezels, while the other two will feature stepped bezels. Of course, the hand-wound La Joux-Perret caliber is on full display through a sapphire caseback. 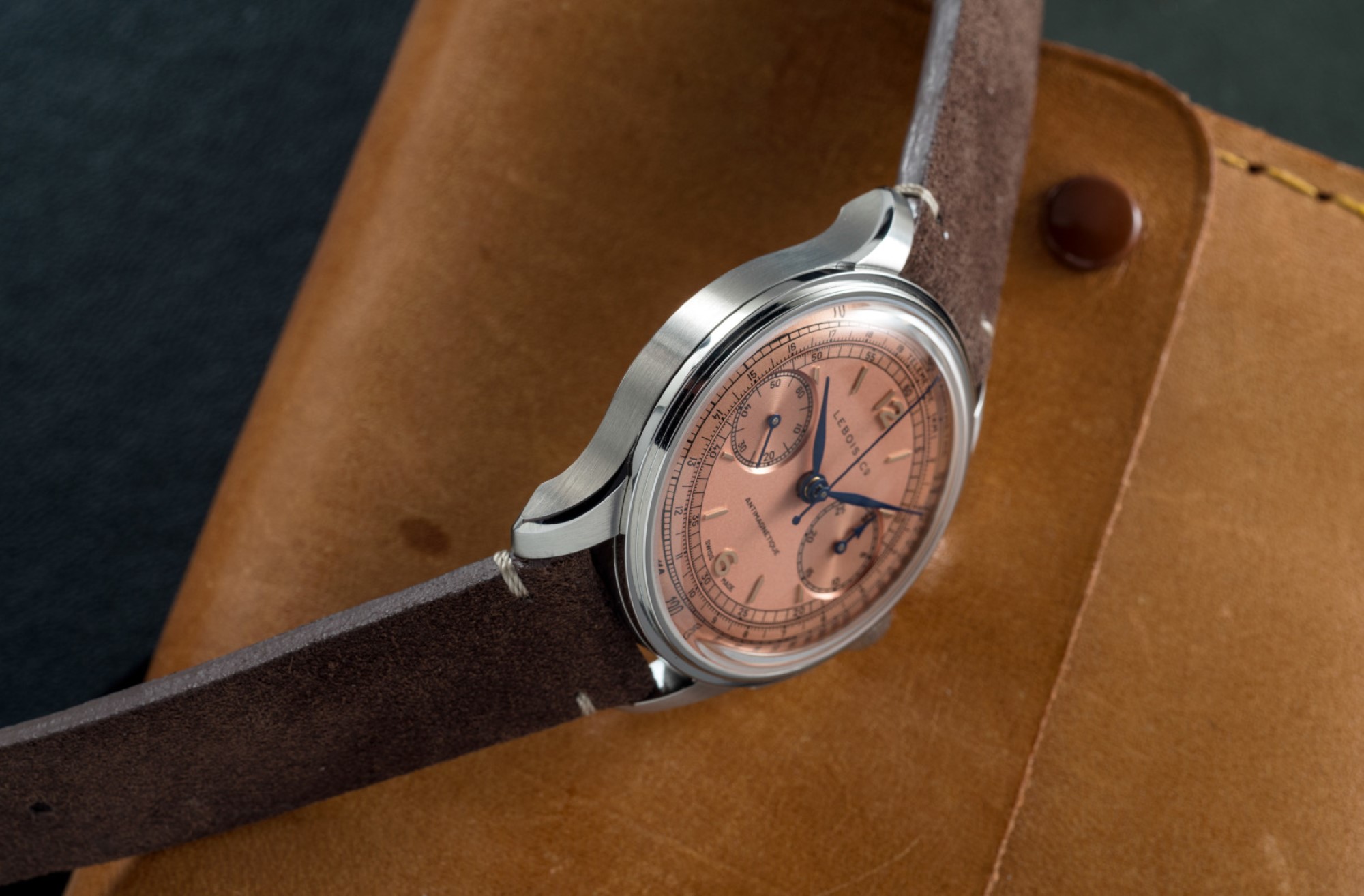 One thing the brand did decide on its own is which straps to pair with each model. While Lebois & Co has suggested pairings for each model (as seen herein), buyers are free to choose between three suede options, one leather option, and two bracelets. Of note, the buckle on the leather straps brings back a long-forgotten style, the “double buckle,” which features a double-sided tang buckle that precludes the need for a fixed keeper loop. For the bracelets, Lebois & Co has partnered with Forstner Bands, maker of exceptional vintage-style bracelets. Buyers can choose from either the Forstner Klip or the Forstner Rivet, both of which have straight ends and fit the 20mm lugs of every model. The options ensure one thing: no matter which pairing one chooses, he or she will have an amazing-looking combination that will sit comfortably and look great on the wrist. 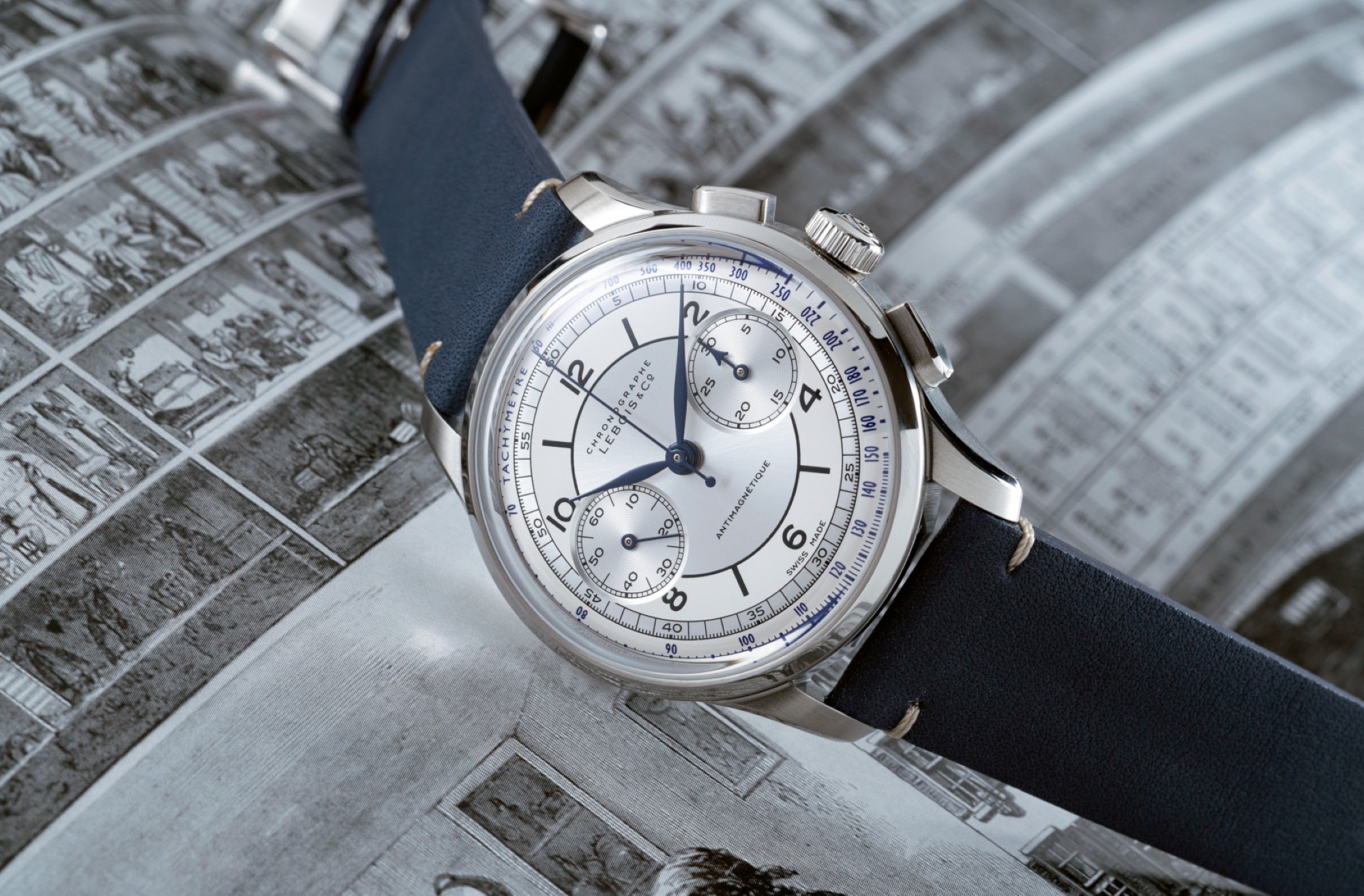 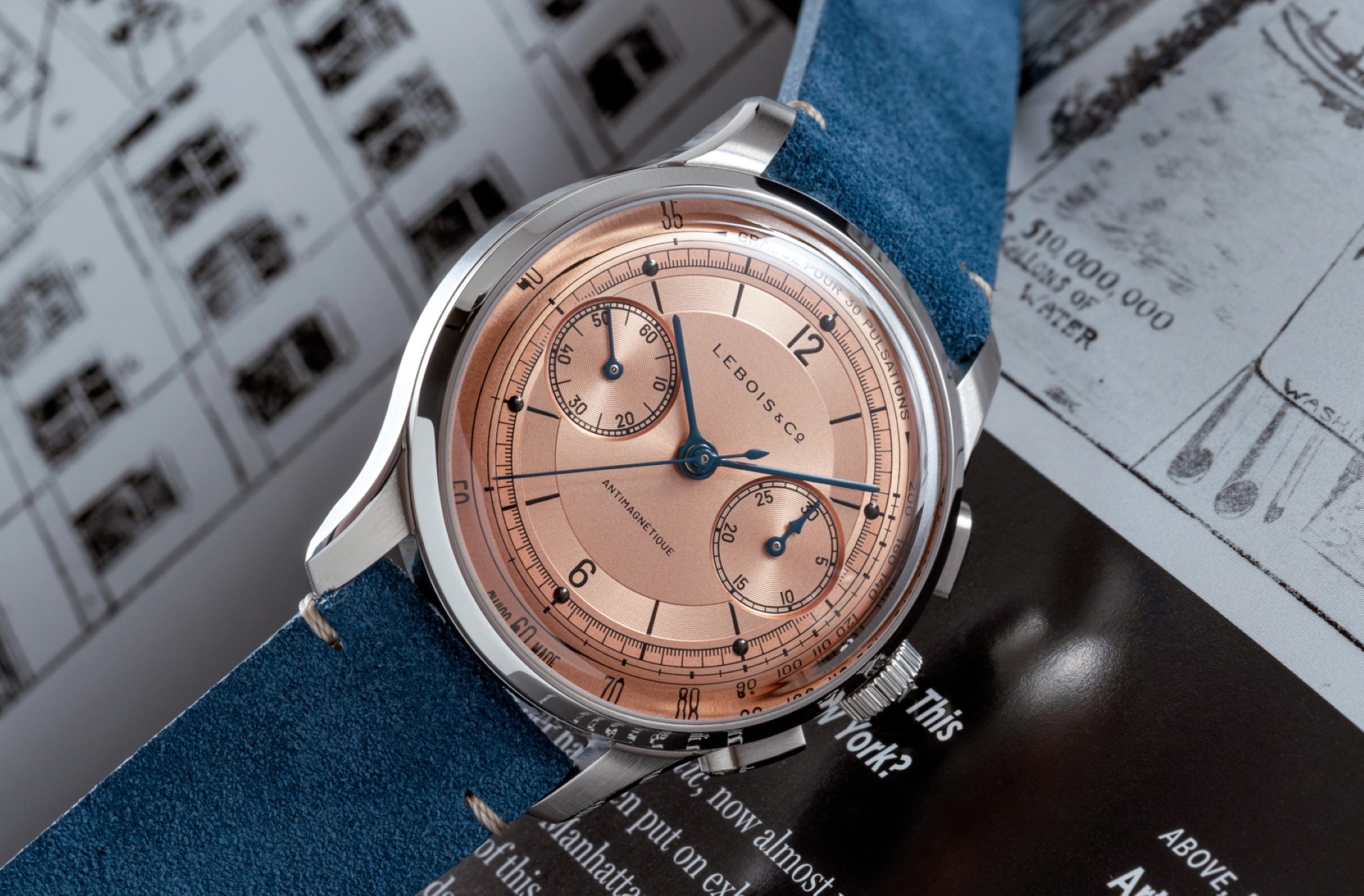 As much as the Lebois & Co CoLAB Heritage Chronograph is the product of engaging the watch community, it is also the product of a brand that is invested in creating beautiful timepieces. Voters may have provided guidance, but in the end, the execution of the final timepieces was in the hands of the brand. From the exquisite dials to the exceptional case to the perfectly paired straps, the watches manage to balance the essence of those vintage Lebois & Co chronographs with modern aesthetics. The CoLAB Heritage Chronographs are not your run-of-the-mill reissues, but rather new watches imbued with the history of the brand that makes them. A first batch of pre-orders concluded in December 2021, but the Lebois & Co CoLAB Heritage Chronographs are available for a second round of pre-ordering now, priced at $2,432 USD on leather or $2,552 on a bracelet; deliveries for first-round pre-orders are expected to start in February 2023, with the second batch to be delivered starting in October 2023. Every watch is paired with a digital twin, stored on the blockchain, for authenticity, as well as earning points for the brand’s CDMLEC reward program.  For more information, please visit the brand’s website.