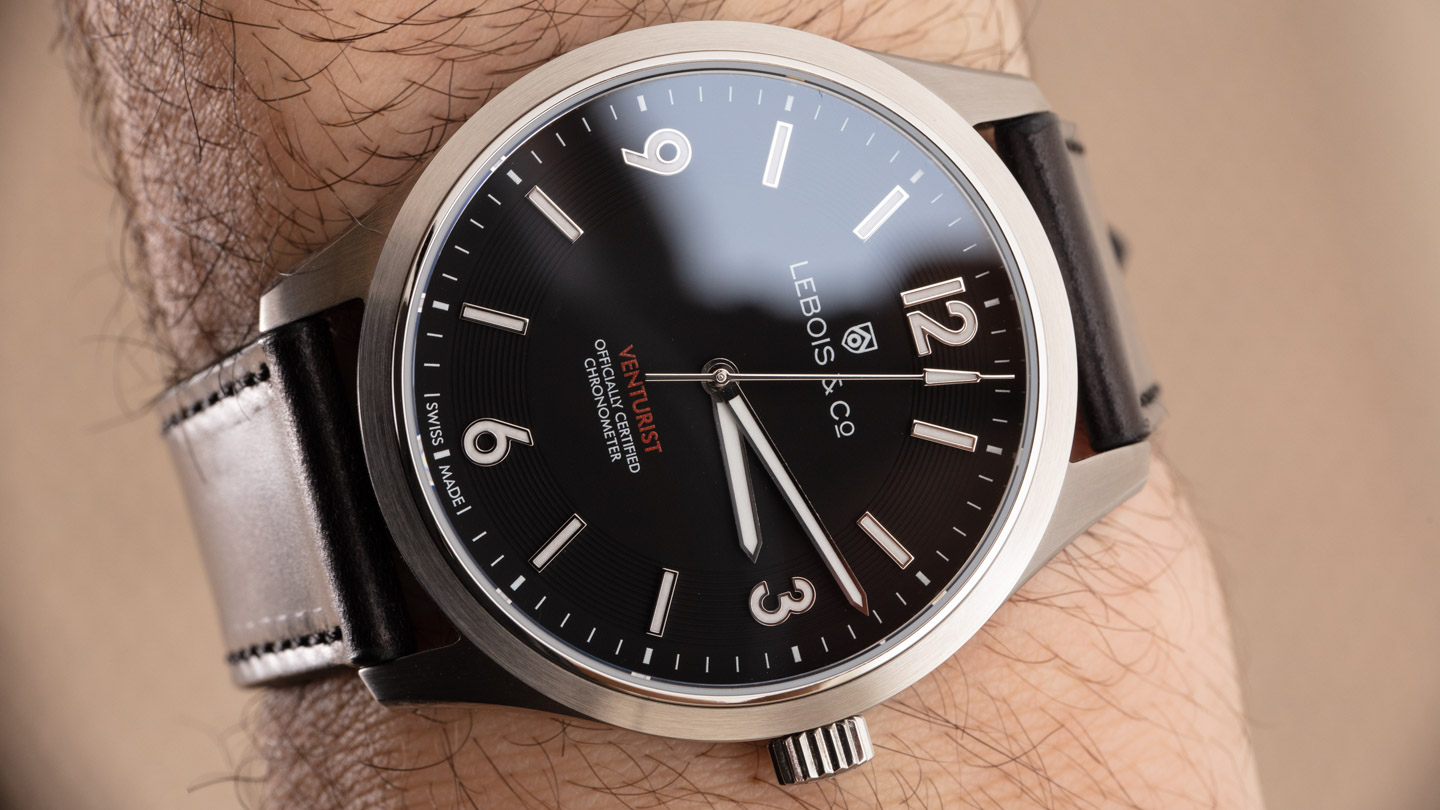 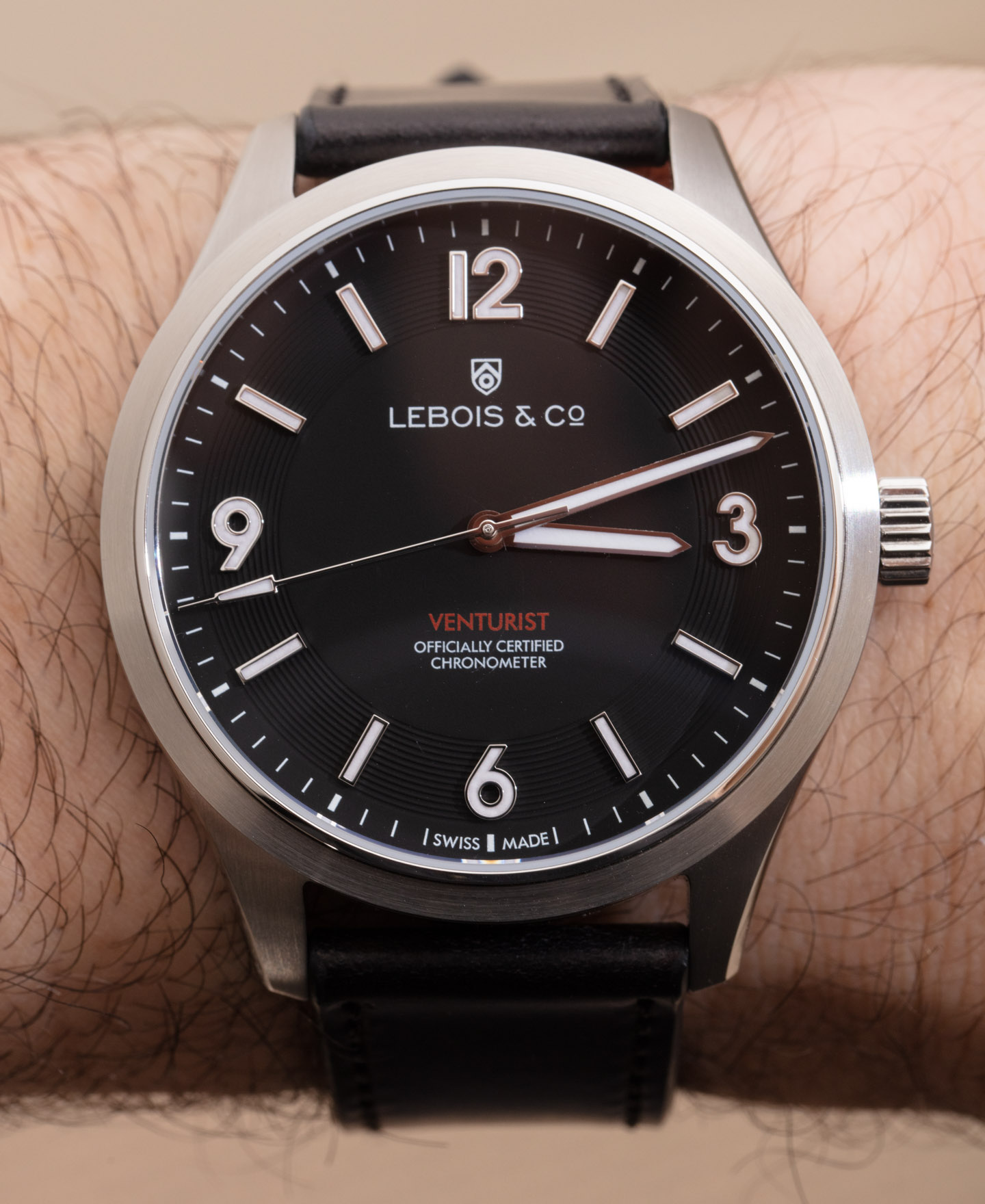 I really do like the Lebois & Co. Venturist wrist watch more than I originally thought. On the wrist, there is little to complain about, and the OC+ Chronometer certification indeed does translate into a really well-forming timekeeper. At worst, you might call the Venturist boring, but — as I will demonstrate below — that’s often a good thing. The reference 241.435 Venturist is the “restarted” (historic name brought back to life) brand’s second major watch, with a third coming soon. The larger aspirations of the Lebois & Co. brand and the people behind it are actually quite interesting, though confusing (or entirely unavailable in your country).

What comes with certain watches such as the Venturist in its “Investor Package” are shares of Lebois & Co. Yes, the company will sell its consumers a pack (25 shares comes with the watch) of Lebois & Co. shares if they buy the watch. The same timepiece comes without shares for the same price — as in some countries (like the U.S., I believe), you can’t actually convey shares in that way. What value do the shares have? There is no market for them right now, so for the time being, they aren’t actually worth much. When might the shares have value? If Lebois & Co. sells (or if they decide to start giving out dividends), then each shareholder is seemingly entitled to some of the value. I’m not sure if those shares come with voting rights — that would be something. 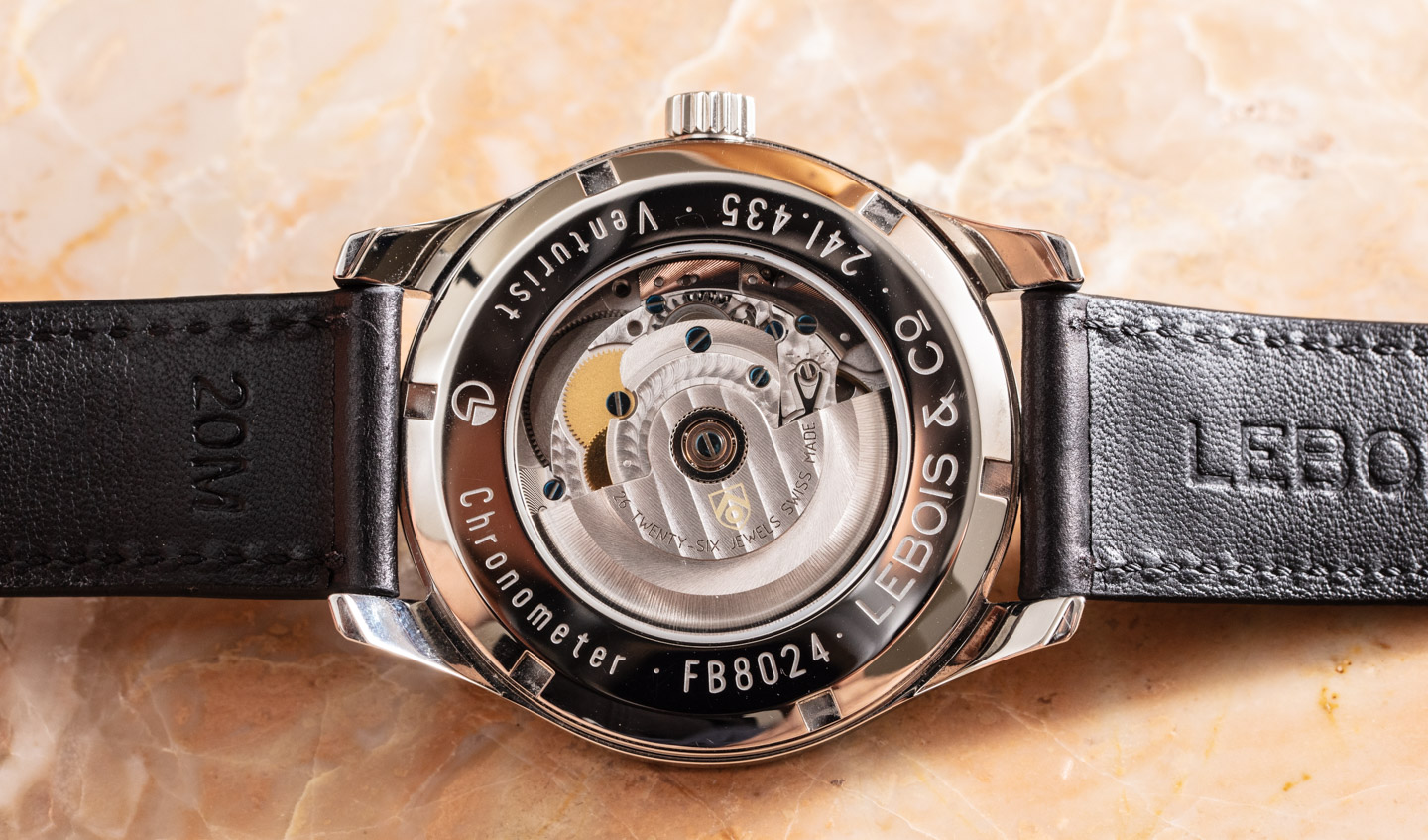 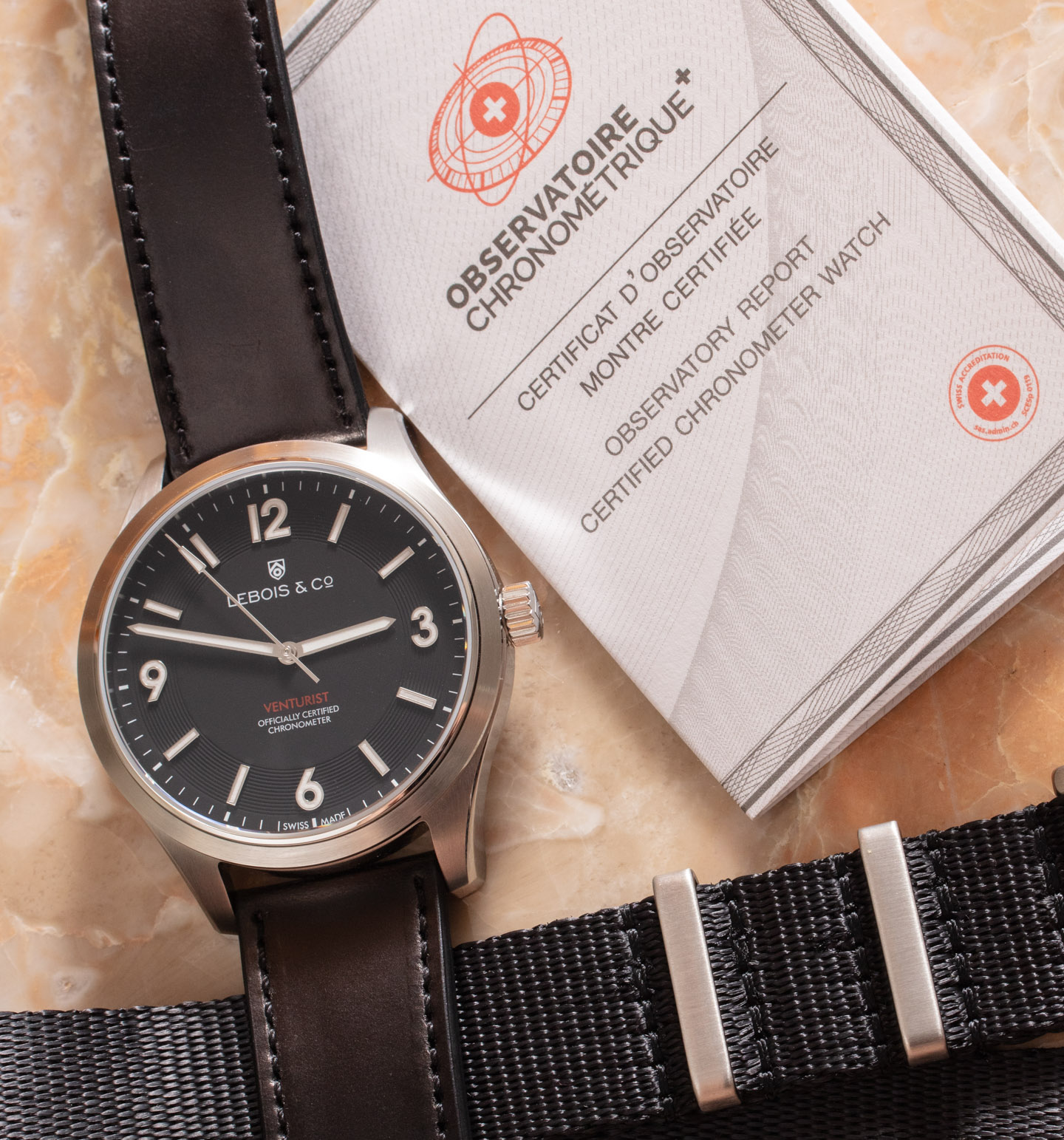 Lebois & Co. is using this scheme in order to help encourage people to buy and celebrate the watches. Perhaps if enough people speaking glowingly of their watches on social media, they a private equity group will take notice and get excited. With that said, there are more than enough watch brands that would bend over backward to be purchased by an equity group. More so, it isn’t that you can’t make money with a watch brand, but it is hard to purchase a watch brand and then milk it for profits (such as conglomerates like Richemont or Kering). For the sake of simplicity, I think of the Lebois & Co. shares as a charming part of the Venturist watch buying experience. I would not think of it in a financial investment context.

Another added piece of value to the watch that, in a sense, exists outside the watch is the fact that each Lebois & Co. Venturist watch is OC+ Chronometer certified. What does this mean? aBlogtoWatch explained in great detail what it means here when first debuting the Venturist watch here. Let me explain what TimeLab’s OC+ Chronometer rating’s major talking points are, in my opinion. OC+ certification includes COSC Chronometer criteria, but then adds a lot of things on top of that. The principal weakness of COSC certification (which is also why Rolex does their own expanded in-house performance certification) is that it only tests movements outside the case — and its environmental condition tests are limited. 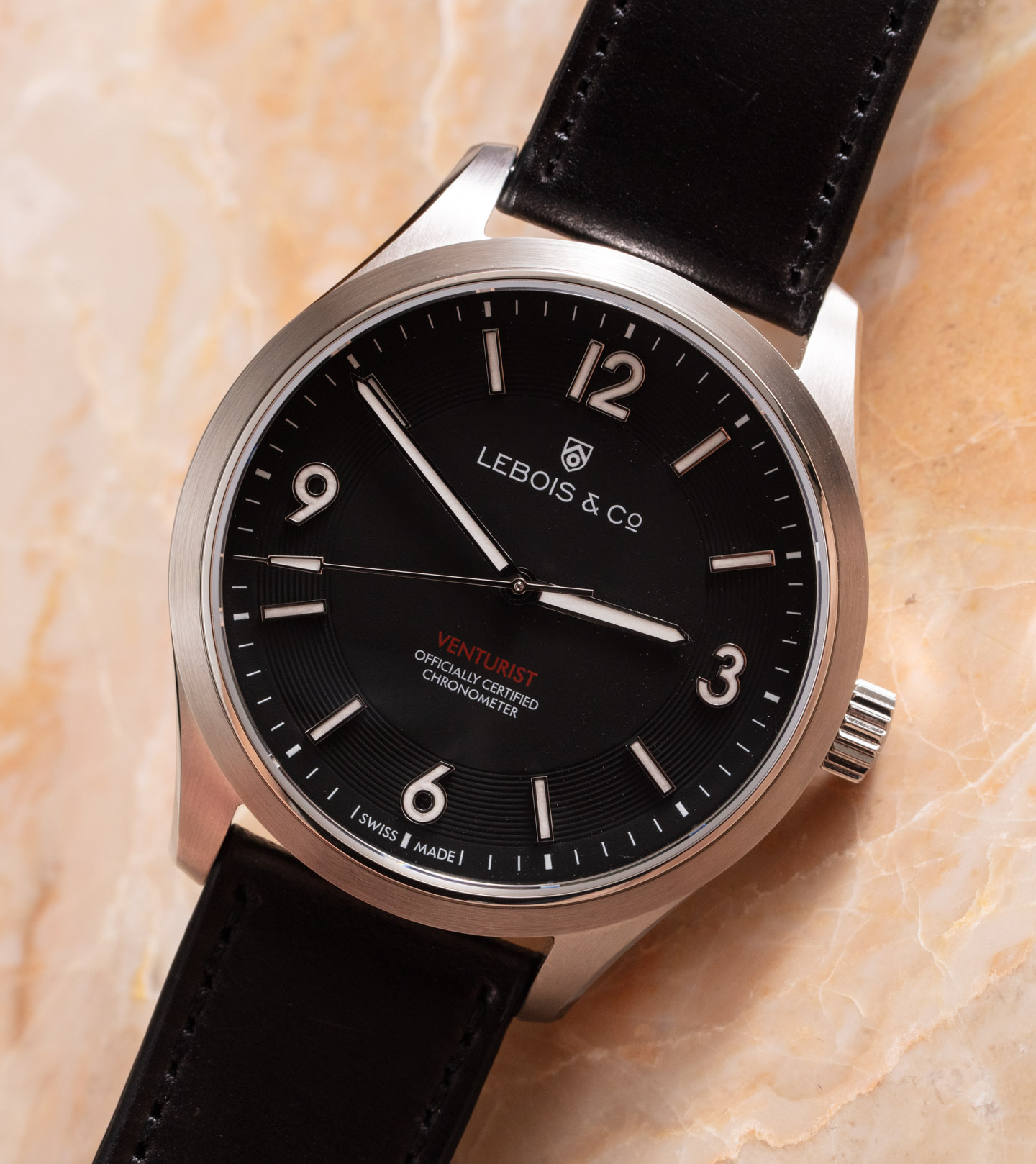 In the real world, watch movements perform differently when cased up than when operating without hands attached to them, etc. After a watch movement is put into a case, its performance can change appreciably. In order to make sure a watch gets excellent real-world performance, it must be regulated again after it is placed inside a watch. OC+ (there are others too) is designed to measure if a watch movement performs well after it is in a watch, and expands upon the testing criteria that COSC implements (such as water- or magnetic-resistance). OC+ also confirms that a watch’s power reserve is what it is promised to be. To get OC+ certified then a brand must send its watch to TimeLab, a cost and time as associated with the service, and then the watch is given its OC+ certificate and can be sold.

In addition to the few hundred Swiss Francs it must cost for this service, the added value to a product with an OC+ certification is that the consumer knows it is environmentally secure and also that it has been regulated for high accuracy. This isn’t a minor thing for people who actually wears their watches and uses them. In a lot of ways, I would love to see OC+ certification expanded. Note that companies like Ulysse Nardin, Omega, Rolex, Patek Philippe (and others) do the equivalent of these or similar tests in-house and don’t always communicate that fact very well. 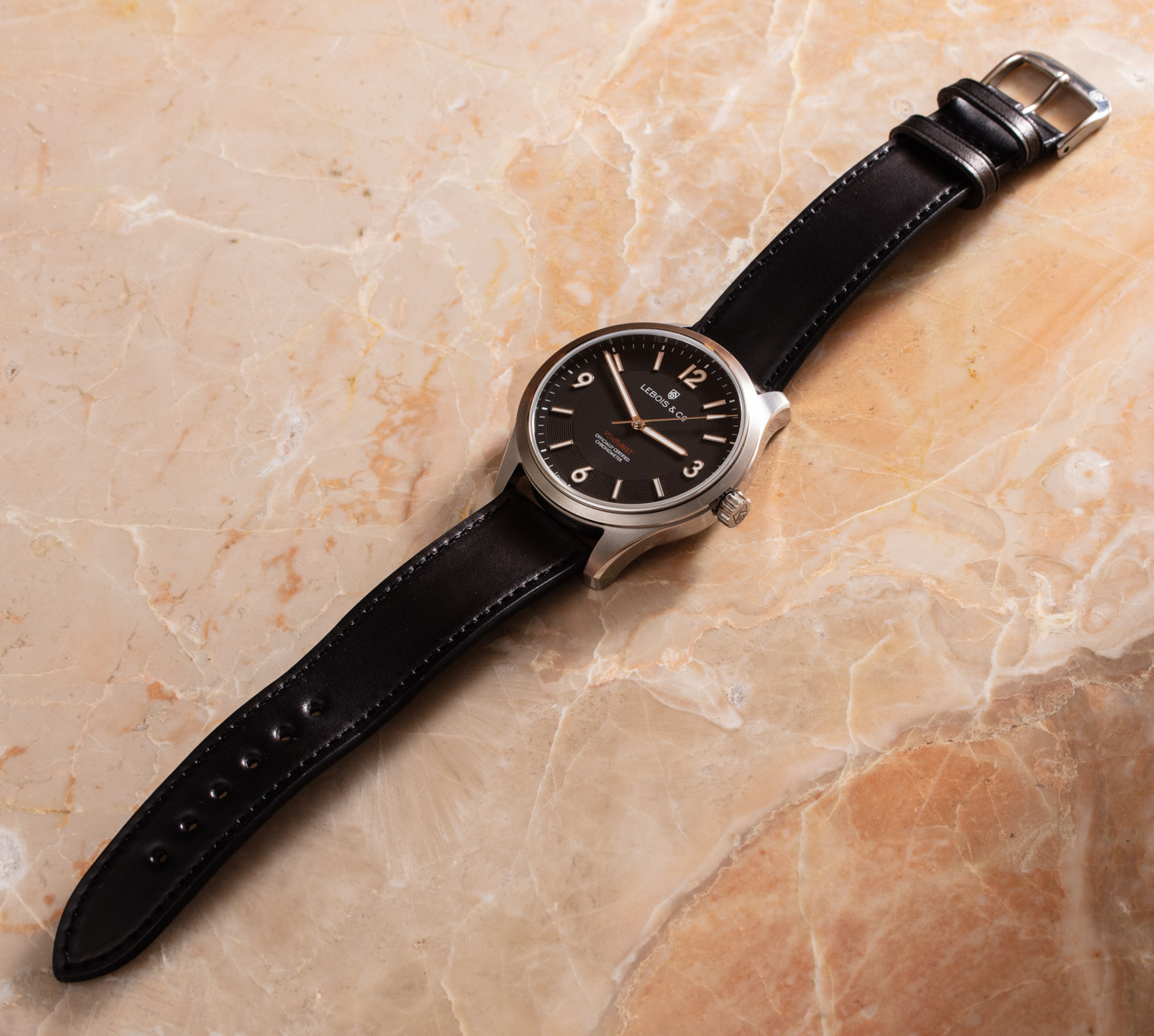 To communicate its Chronometer status, the Lebois & Co. Venturist says “Officially Certified Chronometer” on the dial. The problem with this statement is its obvious homage to Rolex text and also its vagueness about the actual certifying agency. The OC+ Certification is nothing to sneeze at. And I think the Venturist would be even more interesting if that fact was made a bit more clearly on the watch itself. Otherwise, I have pretty much only very positive things to say about the Venturist. From a watchmaking perspective, it is very handsomely appointed and does feel like a $3,000-realm watch.

Price is really the only major hurdle I think anyone would have to liking this unoffensive yet energetic, classic sorta-sports watch. At $2,750 in price, the competition is very intense. A watch needs to look stunning, be original, have sex appeal, and come from a decent brand, at these prices. People expect far less at $500, for example. When viewed from watch aficionado eyes, the Venturist clearly comes from people who know what they are doing. The 41mm-wide steel case is professionally polished and very ergonomic. The case is about as thin as it can be at 10.5mm-thick, with roughly 48mm lug-t0-lug distance, and the application of colors and textures emphasizes legibility while reducing glare on the sapphire crystal. 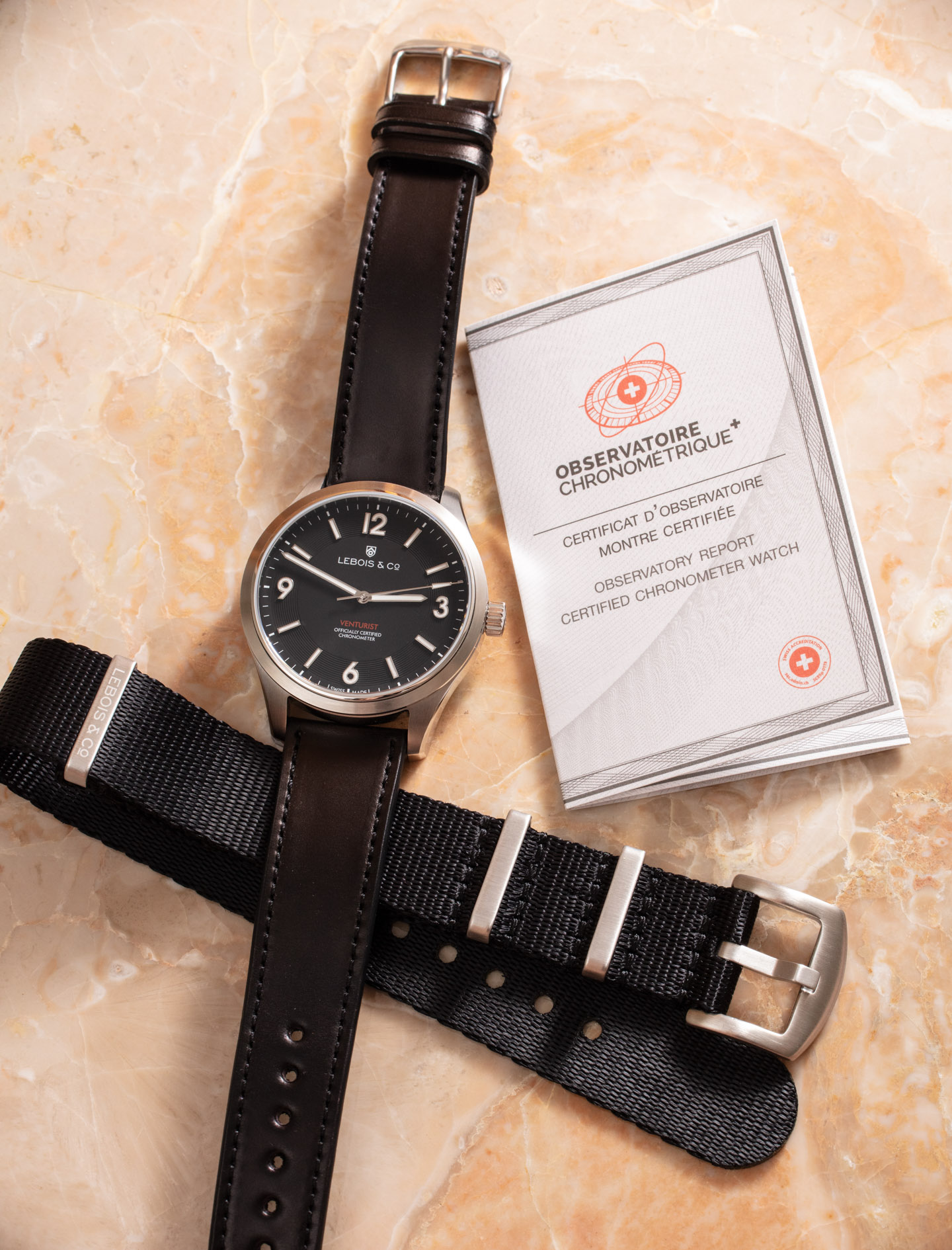 The dial is a breeze to read with properly-sized hands and excellent proportions. The case wears a bit large given the expansive dial and relatively thin overall bezel. With the supplied black NATO-style strap, on its most macho day, the Venturist might be described as “tactical” (but really in a Kingsmen sort of way), and on its most conservative day, you might wonder if the banker wearing one actually ever intends on getting the watch wet. The case does have a screw-down crown and is water-resistant to 100 meters. You could easily make this watch your activity buddy (though it would truly be a shame to harm the case’s immaculate polish).

Speaking of polish, the rear of the piece isn’t without its merit. Lebois & Co. went for a very nicely decorate Sellita SW200 which they call their caliber LC-201. It has several decorative polishes on it and blued steel screws operating at 4Hz with 38 hours of power reserve. The OC+ Chronometer certification means that it performs well too. 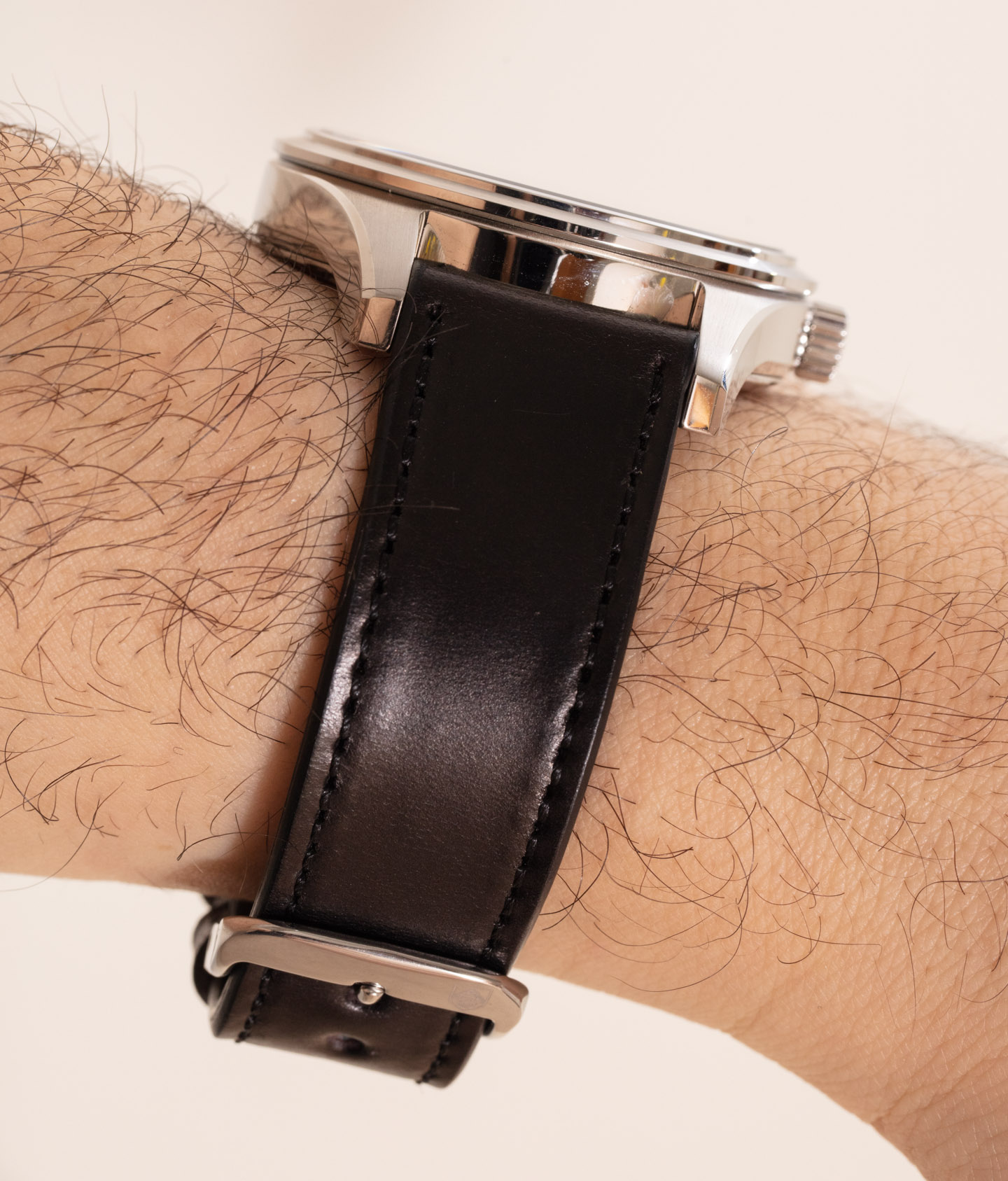 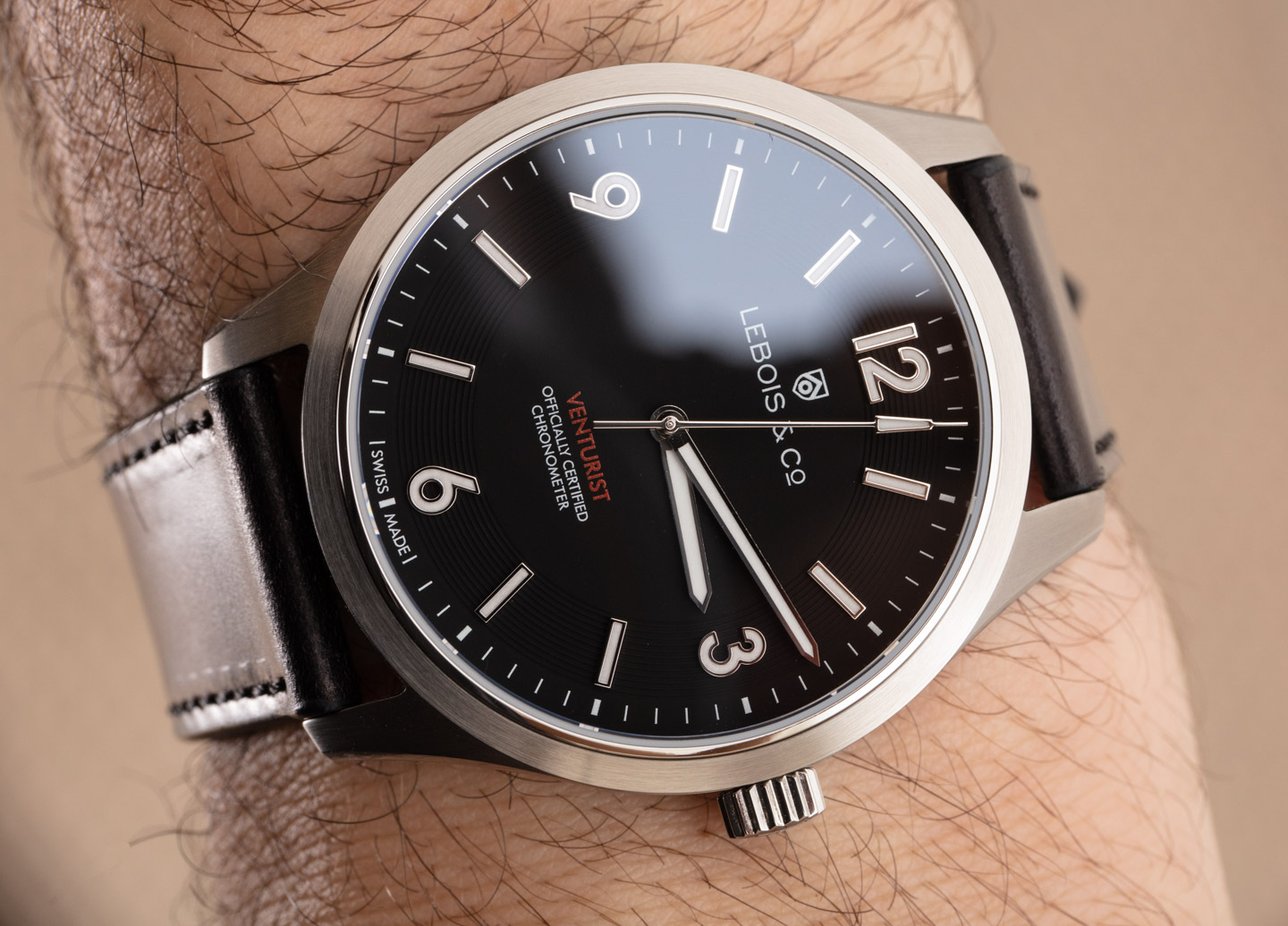 The Venturist’s other strap is black Cordovan leather, and it’s pretty good quality given the many black leather straps I’ve tried on. There are little touches such as the not-sharp buckle and round pinholes that are welcome details. That said, on the black strap, the Venturist becomes what some people might consider a bit of a boring watch. Is that a bad thing? Well, it can be if you want your wristwatch to be flashy. For those days, you’ll need to wear something else. There are other days when a boring watch is exactly what the doctor ordered. I’ve had this discussion with other watch lovers before, as well as the aBlogtoWatch designer Matt Smith-Johnson. He loves talking about the days when he wants nothing more than to wear a boring watch and how pleasing it can be to the eye. “Boring” is probably not the right term, but it does imply a non-offensive, expected, time-honored quality. Boring things are safe and predictable, and also comfortable. We all deserved to be bored by our watches once in a while. Boring watches are those you don’t have to worry about and those that tend to always blend in. I am guessing that most watch lovers own at least 50% “boring watches.”

Luminant for the Venturist is quite nice given the rich application on the hand and applied hour markers. The black dial has a bit of texture around the hour-marker scale but is otherwise rather humble. To Lebois & Co, the Venturist was the “modern” yang of its initial “Avant Garde” watch’s classic-looking yin. They both feel kind of modern to me, but the Venturist certainly feels more designer-driven, like a watch I’d wear with a tuxedo as much as I’d wear while strolling down the street in shorts. Price for the Lebois & Co. reference 241.435 Venturist watch is $2,750 USD. Learn more at the Lebois & Co. website here.

Necessary Data
>Brand: Lebois & Co.
>Model: Venturist (reference 241.435)
>Price: $2,750 USD
>Size: 41mm-wide, 10.5mm thick, and ~48mm lug-to-lug distance.
>When reviewer would personally wear it: As a conservative yet well-curated daily wear when I want to remind myself what being into horology is all about.
>Friend we’d recommend it to first: Active guy with a good eye for details who wants a versatile watch that can go between office duty and hobby time with ease.
>Best characteristic of watch: Does many things well as a tool to satisfy timepiece enthusiasts. Legible, comfortable, well-made. OC+ Certification wins it a lot of nerd cred.
>Worst characteristic of watch: Costs more than many might guess at first glance. While the price might be worth it, it is in a highly competitive space. Design can be accused of being spartan.