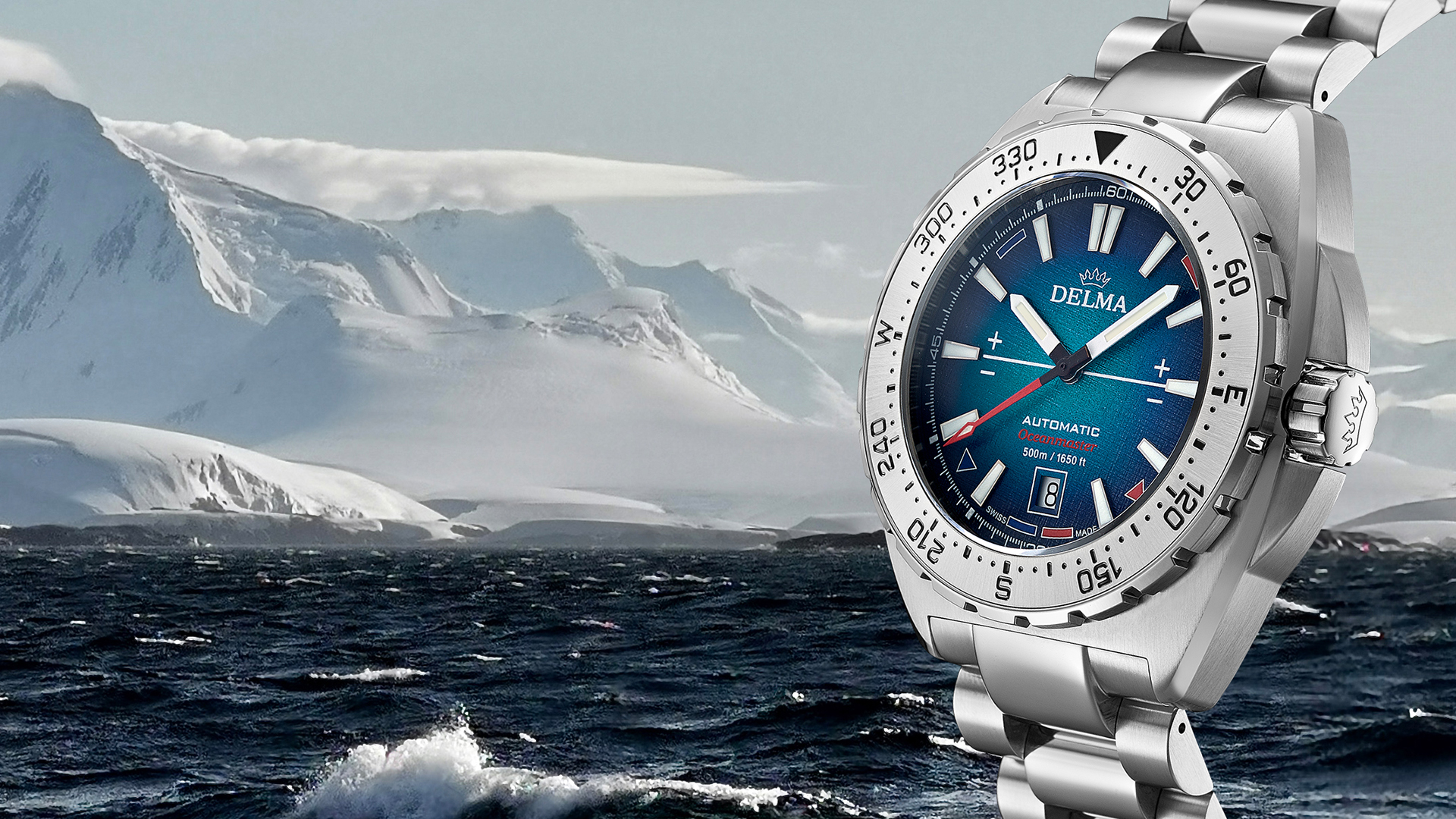 Since the discovery of Antarctica in 1820, the frozen southern continent has been a source of intrigue for explorers and the general public alike, including watchmakers. One of these brands is Delma, which celebrates the 200th anniversary of Antarctica’s discovery with a unique limited edition version of its Oceanmaster sailing watch. While the Delma Oceanmaster Antarctica may seem like a simple blue dial version at first glance, this piece offers some unorthodox and exciting features that set it apart from the pack. 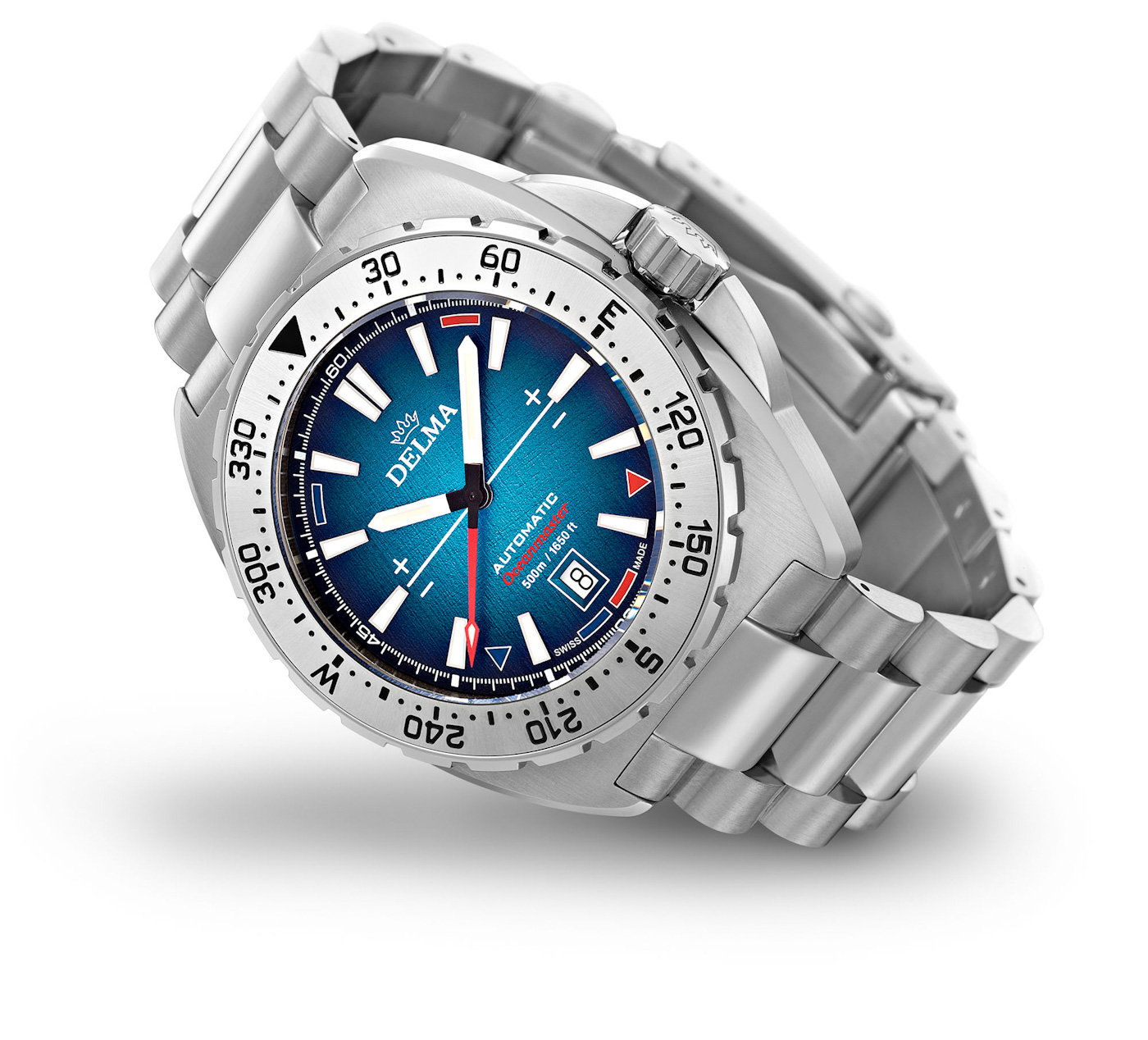 The chunky 44 mm stainless steel barrel case offers an upsized interpretation of ‘70s charm, with a broad chamfer running the length of the case and massive semicircular crown guards. The deeply toothed rotating bezel forgoes the usual diving scale for a compass insert (what Delma calls a nautical bezel.) While this may affect the usability of the Oceanmaster Antarctica for actual diving, the case is more than capable of handling it from a technical standpoint with a hefty 500 meter water resistance and integrated helium escape valve. Around back, a special caseback engraving celebrates the discovery of Antarctica. 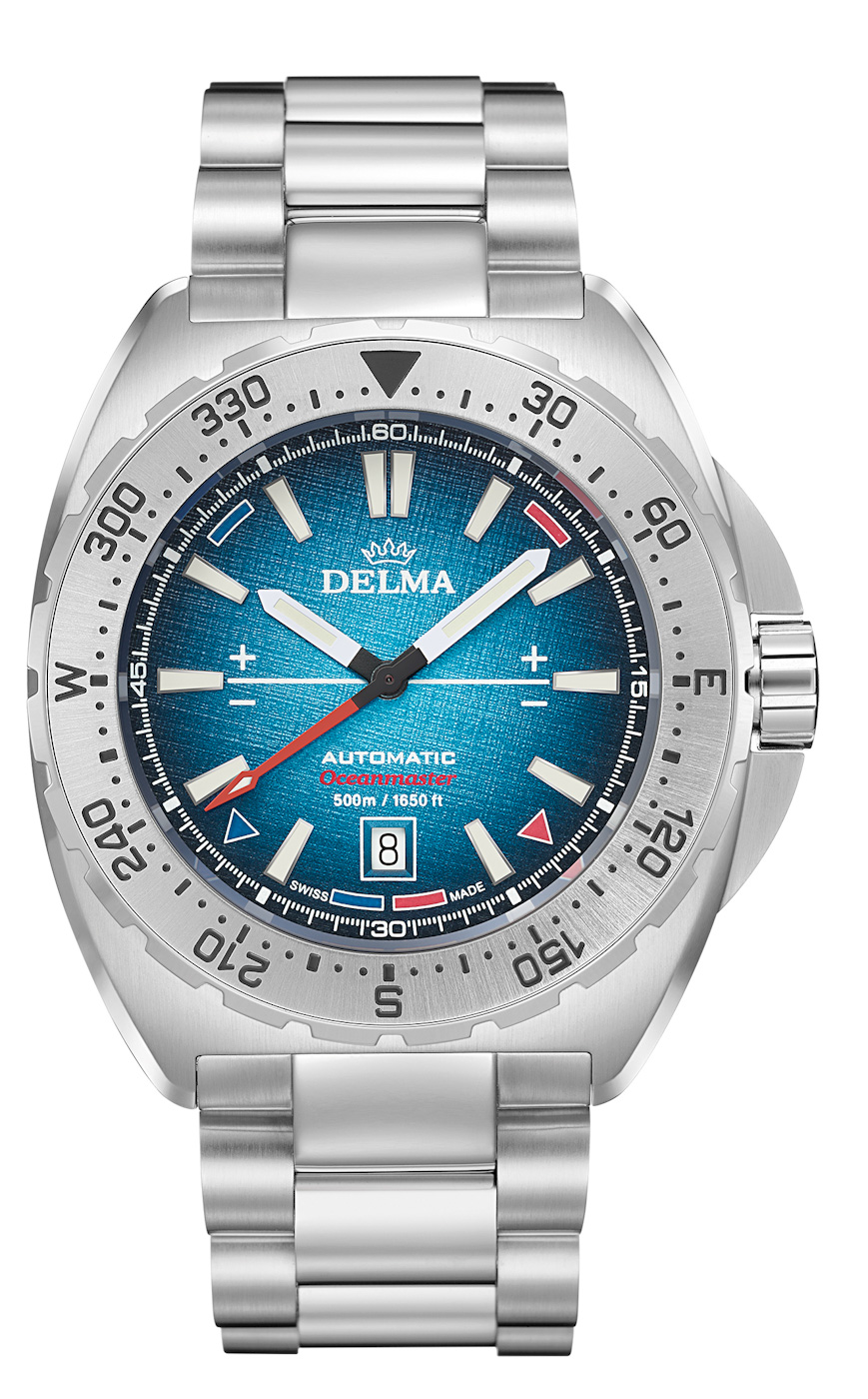 The dial of the Delma Oceanmaster Antarctica makes its frozen inspiration clear, with a distinctive and handsome dégradé pattern fading from ice blue to a deep oceanic navy, while the crosshatch surface itself evokes the texture of glacial ice. Other than the color and texture, what immediately jumps out about the Oceanmaster Antarctica’s dial is the sets of red and blue markers at 10:30, 1:30, 4:30, 7:30, and 6 o’clock. These baffling markers are point of sail indicators, which when used in conjunction with the compass bezel can be used to help a ship find the optimal tacking direction during long distance sailing. It’s a truly esoteric complication for most people but helps to sell the Oceanmaster Antarctica’s celebration of the exploring sailors that first found the continent. 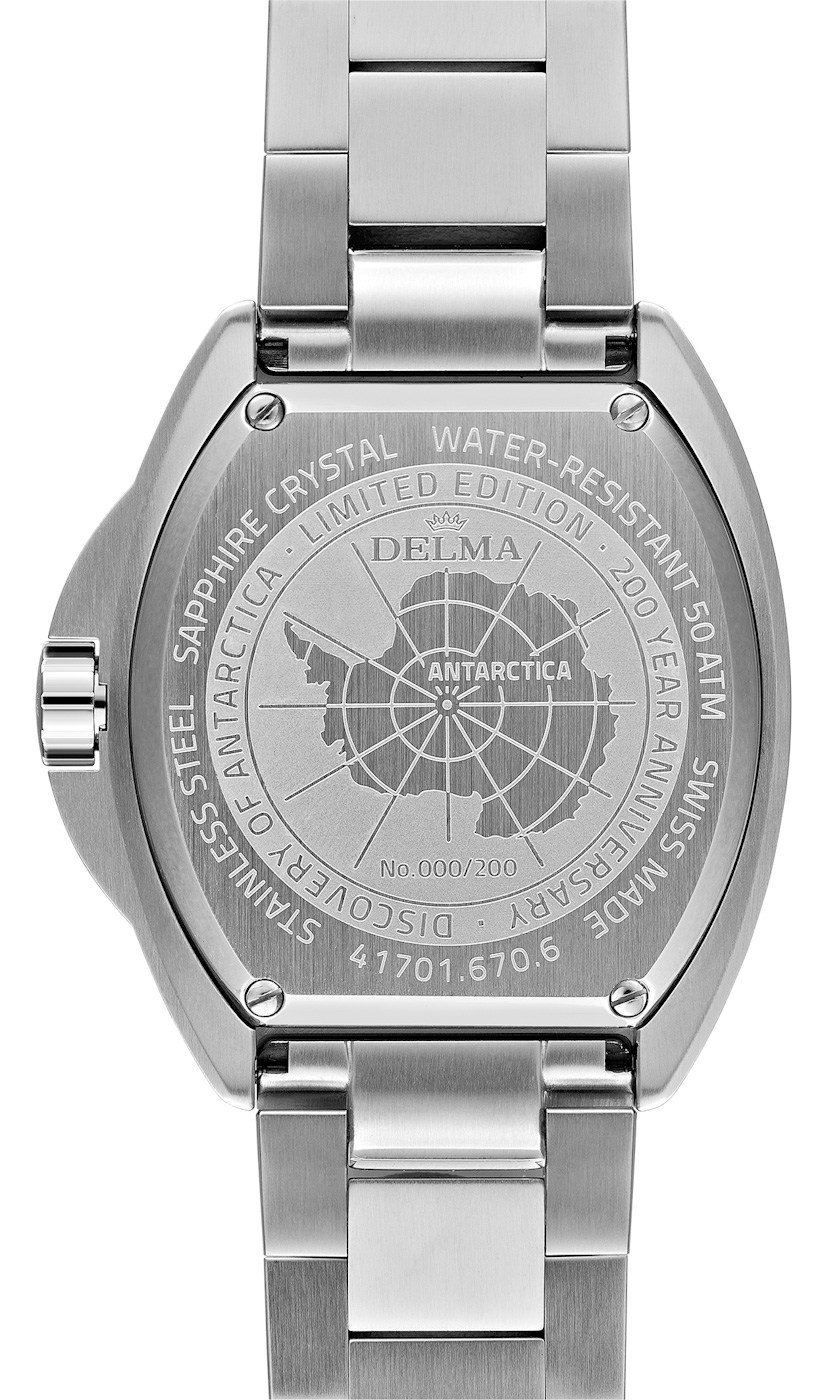 The Delma Oceanmaster Antarctica is powered by the reliable workhorse ETA 2824 automatic movement, and other than a signed rotor, specifications are in line with the usual 2824 output. Delma claims a 38 hour power reserve and a 28,800 bph beat rate. 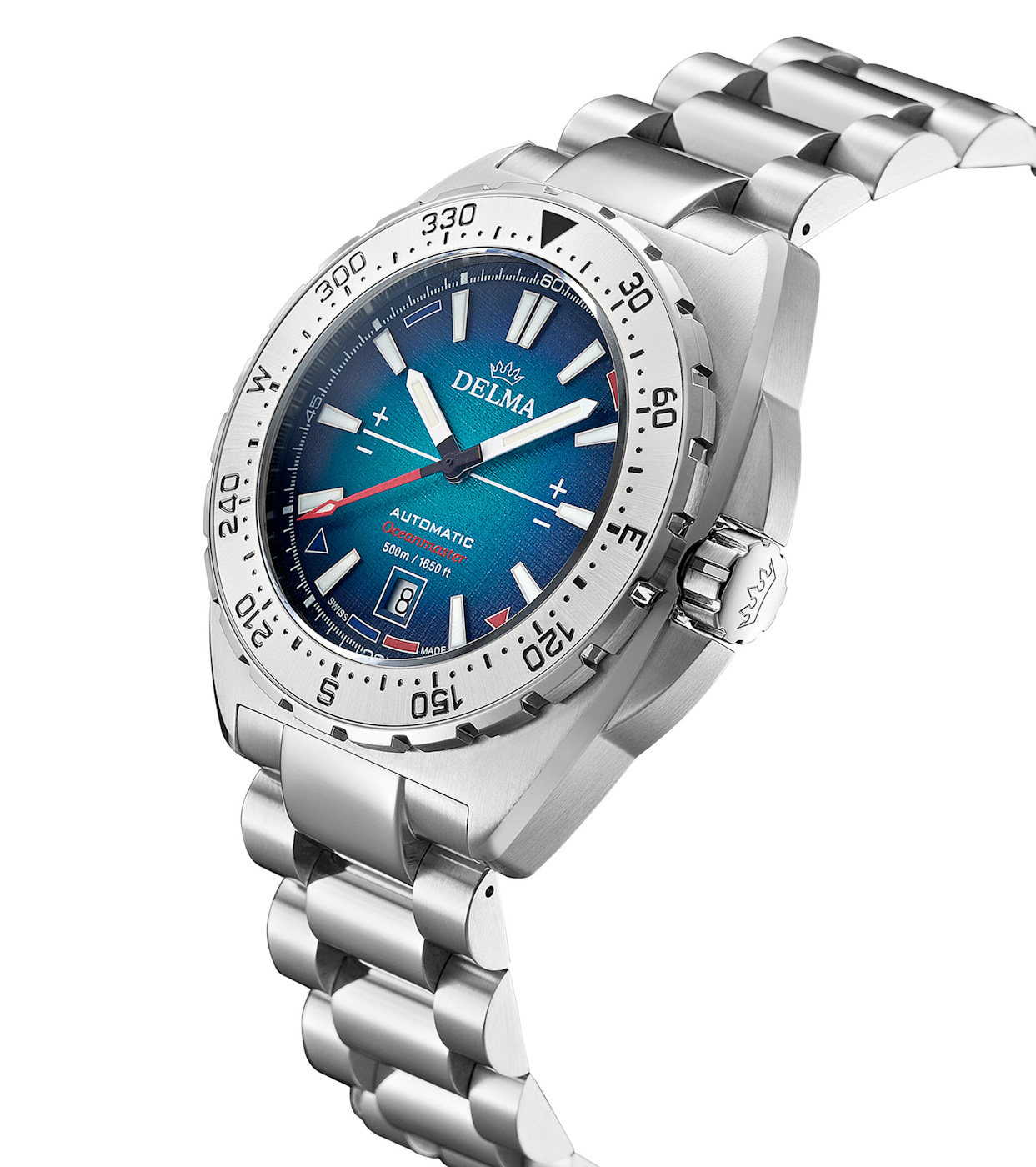 Delma pairs the Oceanmaster Antarctica with a rounded three link bracelet, featuring solid brushing and highly polished center links. This bracelet is finished with a signed clasp featuring a two-button safety release. Surprisingly for a watch with a helium escape valve and a 500 meter depth rating however, there’s no diver’s extension here. 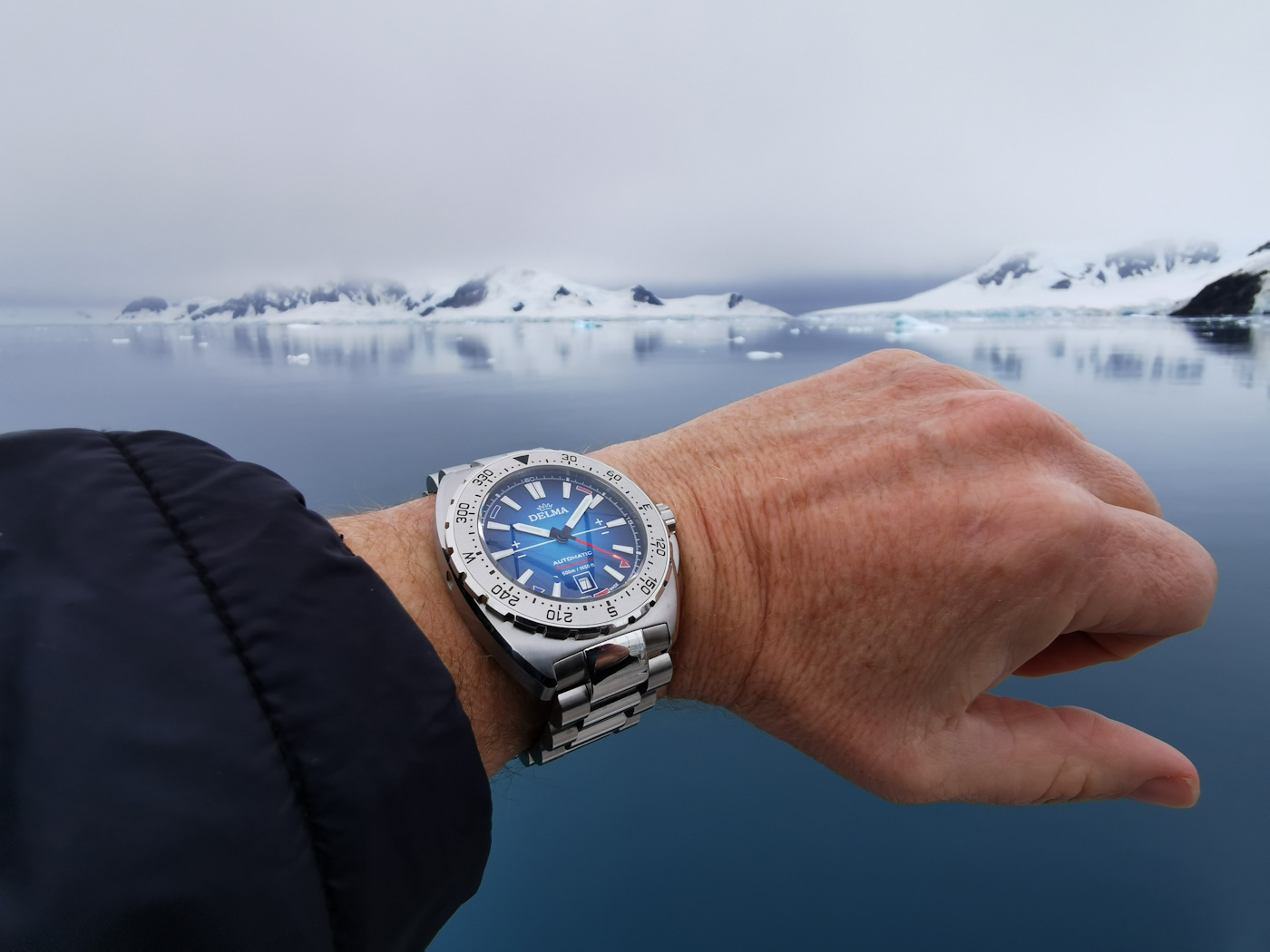 Only 200 examples of the Delma Oceanmaster Antarctica will be made to commemorate the bicentennial of Antarctica’s discovery. As part of its commemoration of this historic event, Delma has pledged a portion of the proceeds of each sale to the Antarctic and Southern Ocean Coalition, helping to preserve the beauty and diversity of Antarctic wildlife for generations to come. These pieces are available now through Delma authorized dealers, listed at an MSRP of $1,450. For more information, please visit Delma’s website.