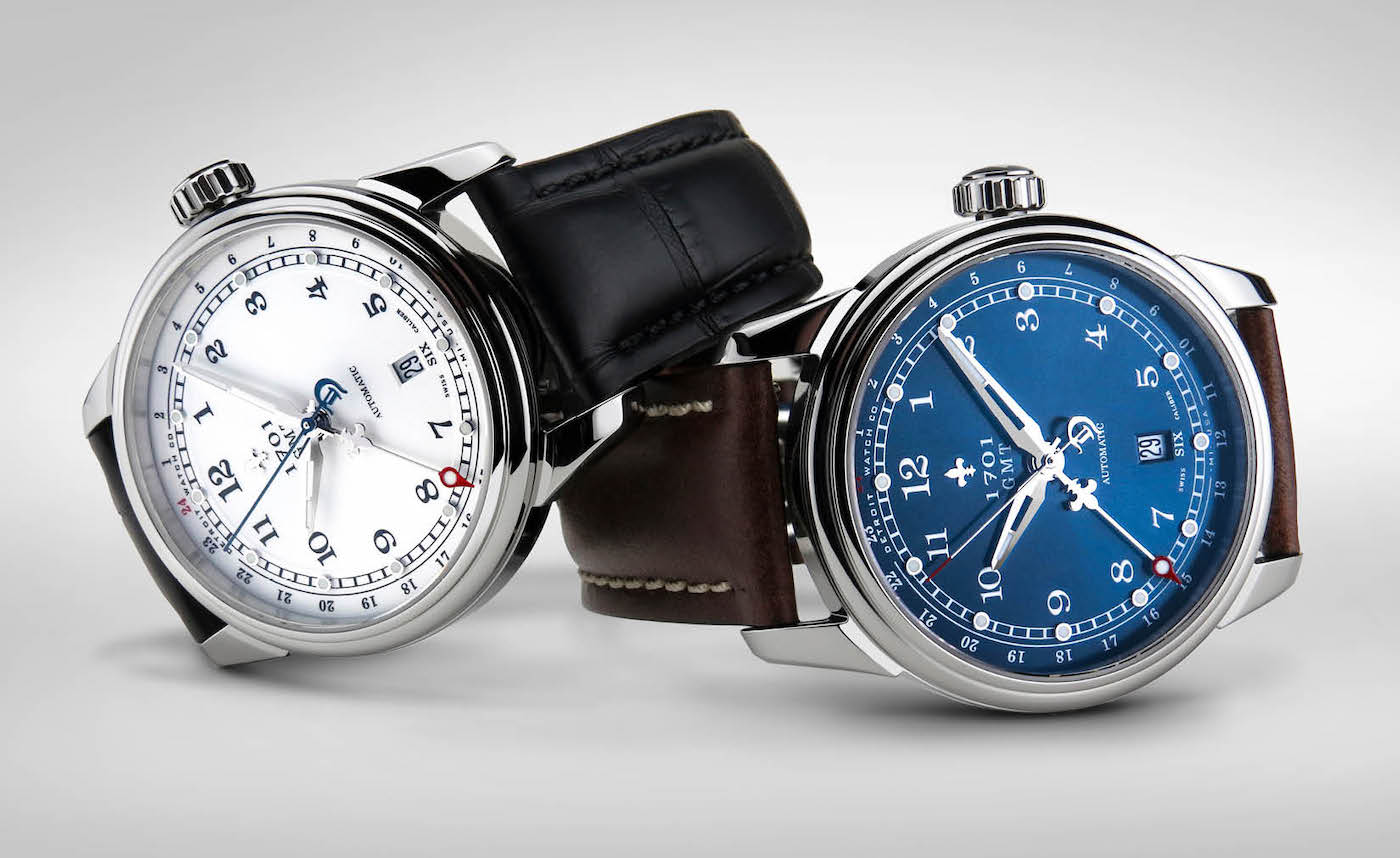 There isn’t too much going on in Michigan when it comes to homegrown watchmaking companies, but Detroit Watchmaking Company (the “Pride of Detroit”) is still going strong, six years after foundation in 2013. With 10 models available in a range of colors, the collection has a fair bit too offer without straying too far from its original concept of providing watches with a timeless design composed of globally sourced components assembled in Detroit. The Detroit Watch Company 1701 Pontchartrain Blue GMT Dual Timezone watch is a very slight update to a model we’ve reviewed on aBlogtoWatch before, but its new dial layout significantly changes its appearance, bringing it up to date with a current trend for vertical axis symmetry, with which many brands seem to be experimenting. 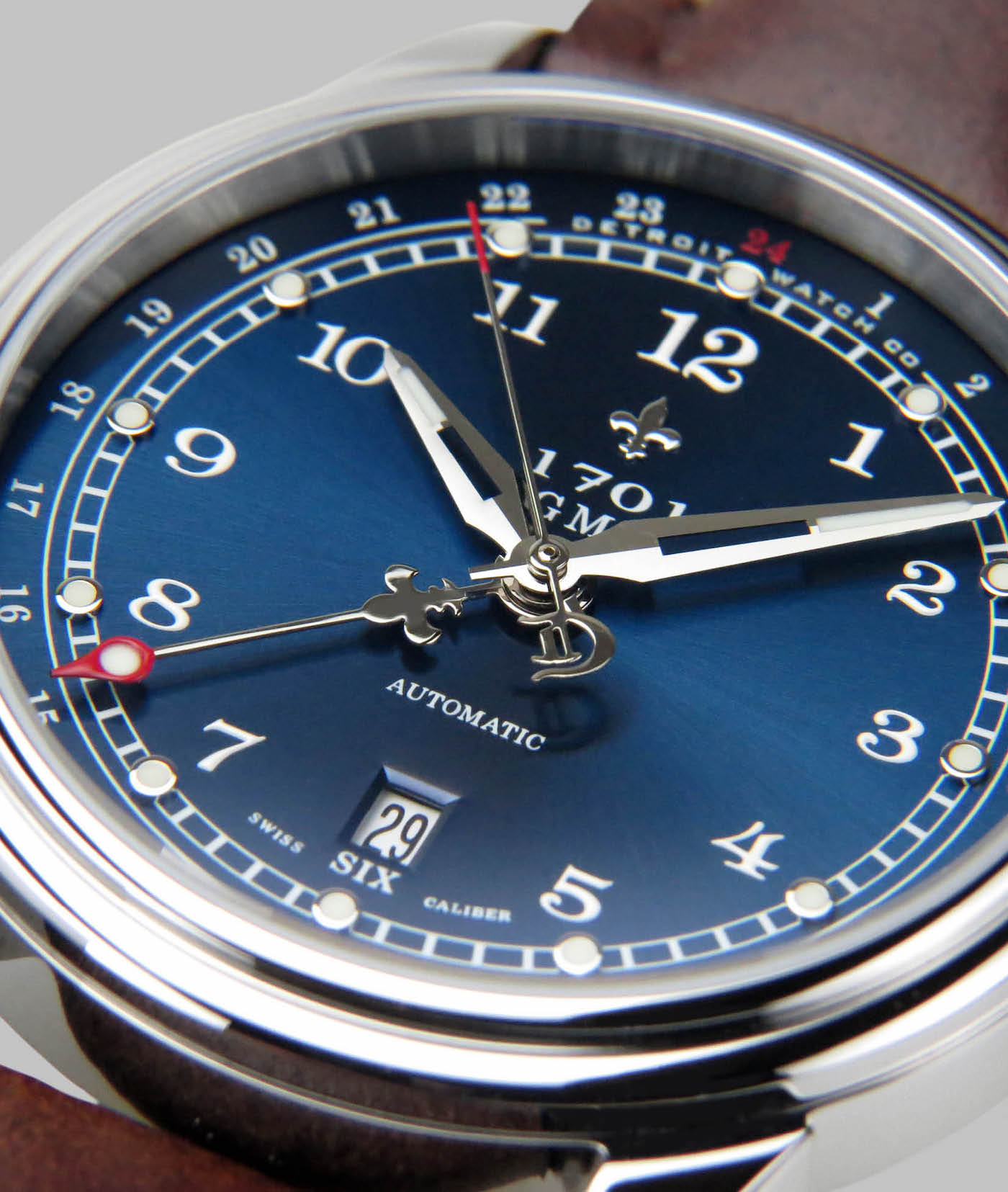 The redesign has moved the date window from the more traditional 3 o’clock position down to 6 o’clock. As a result, changes to the logo, the “1701” marker, and GMT text have been implemented. The wordmark remains arched between the 51 and 09 minute markers above the minute track. The old “D for Detroit” logo is now acting as the counterpoise for the seconds hand. In its place is a much less ornate Fleur de Lis. As a counterpoise, the Gothic-script “D” is surprisingly effective. Everything I know about watch design is telling me it shouldn’t really work, but I really don’t mind the end result, especially on the silver seconds hand. (On the blue hand, I think it looks a bit overpowering, as one might have expected it to). 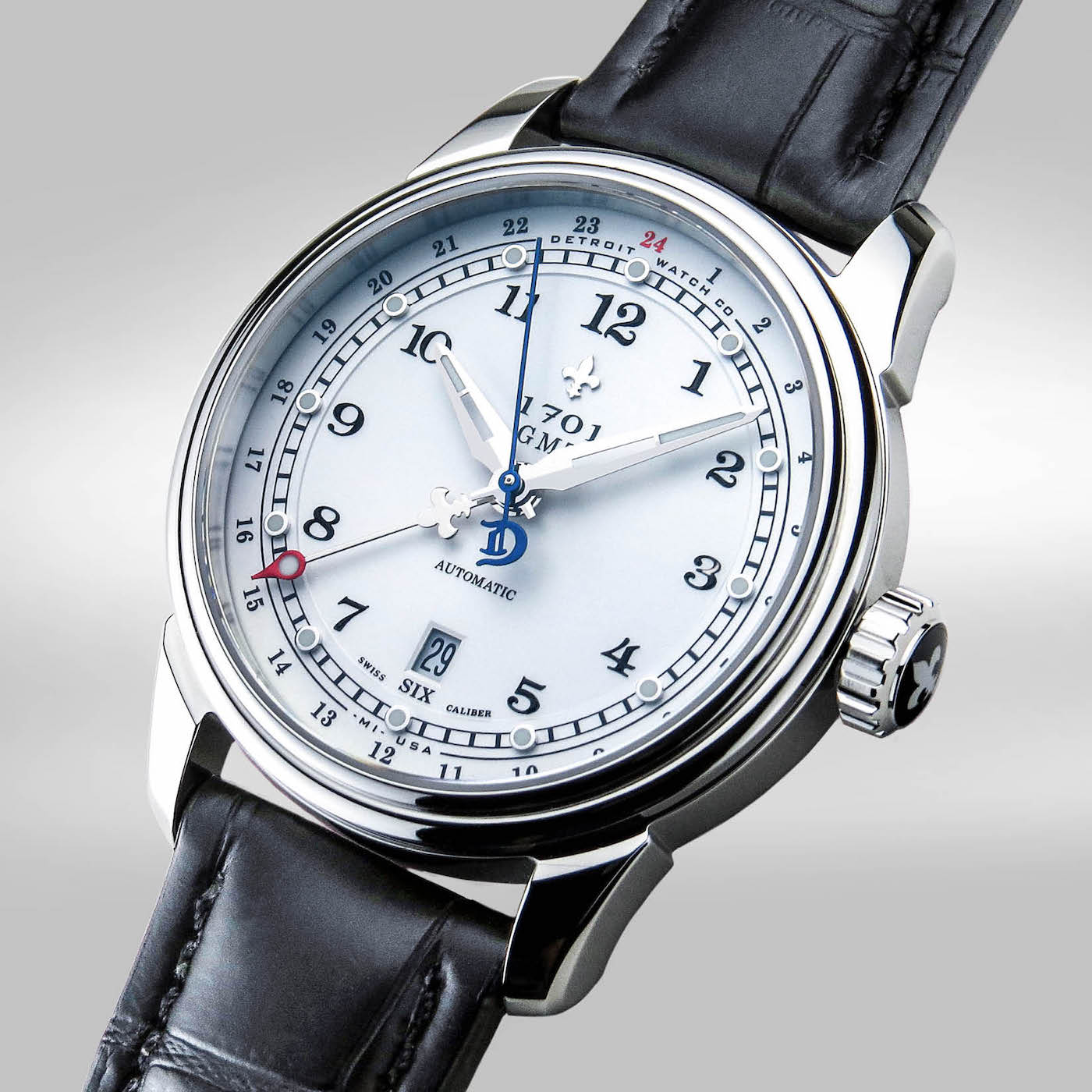 The 1701 text had featured at 9 o’clock on the original model (to provide balance along the horizontal axis) but has now been shifted to a more run-of-the-mill position below the Fleur de Lis. Below that is the GMT text, which has relocated from 3 o’clock. One of my favorite aspects of this new design is that the 6 o’clock Arabic numeral has been replaced by the word “SIX” printed below the newly positioned date window. 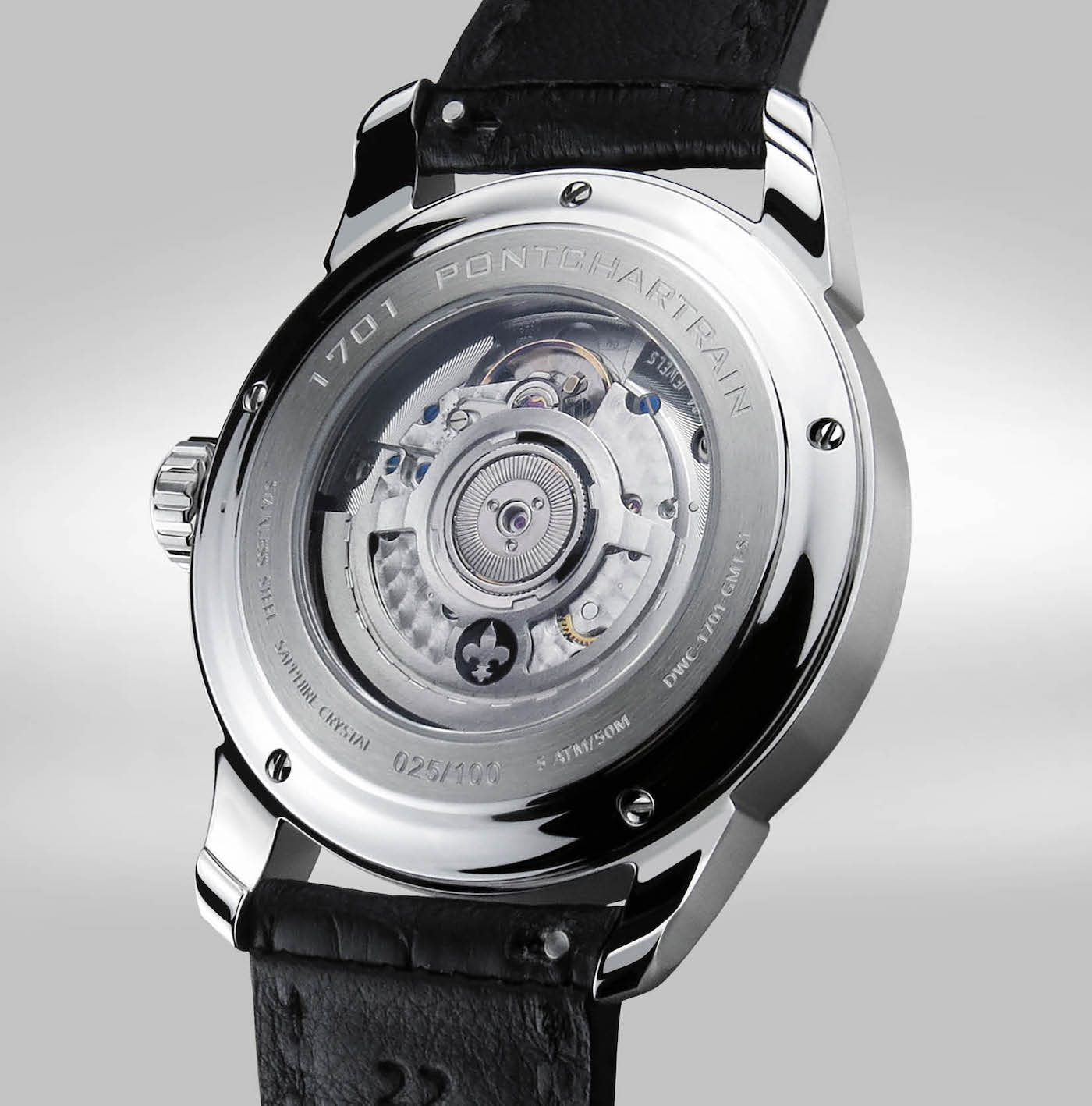 While I very much enjoy a bit of vertical symmetry, myself, the offset logo and wordmark on the original model was distinctly more characterful. I do think this new update looks far more contemporary and certainly more mainstream, but I kind of miss the quirkiness of the original. In addition to the slight tweaks to the dial layout, Detroit Watch Company has three extra years of experience under its belt, which really counts when it comes to getting the best out of your abilities, budget, and manufacturing partners. 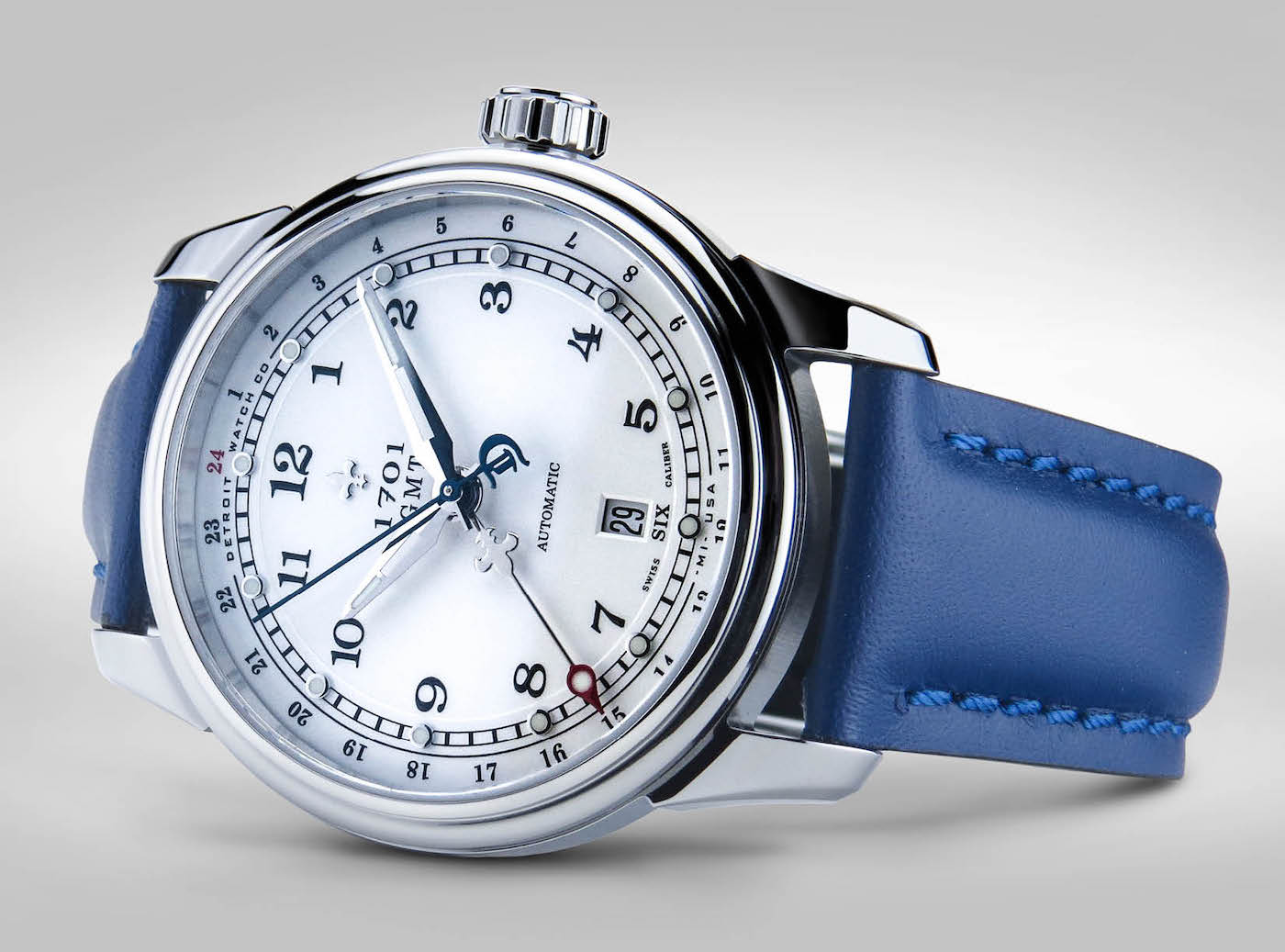 The new Detroit Watch Company 1701 Pontchartrain Blue GMT Dual Timezone watch is limited to 100 pieces and carries a retail price of $1,495 in either a blue or a white dial. For that price, you get a 42mm stainless steel watch with 22mm-wide lugs, water resistance down to 50 meters, and a Swiss-made ETA 2893-2 GMT caliber inside. At just 9.7mm-thick, this latest offering from one of North America’s newer brands is a solid watch for the smartly dressed traveler who wants to reward a fledgling company’s efforts. Learn more at detroitwatchco.com.