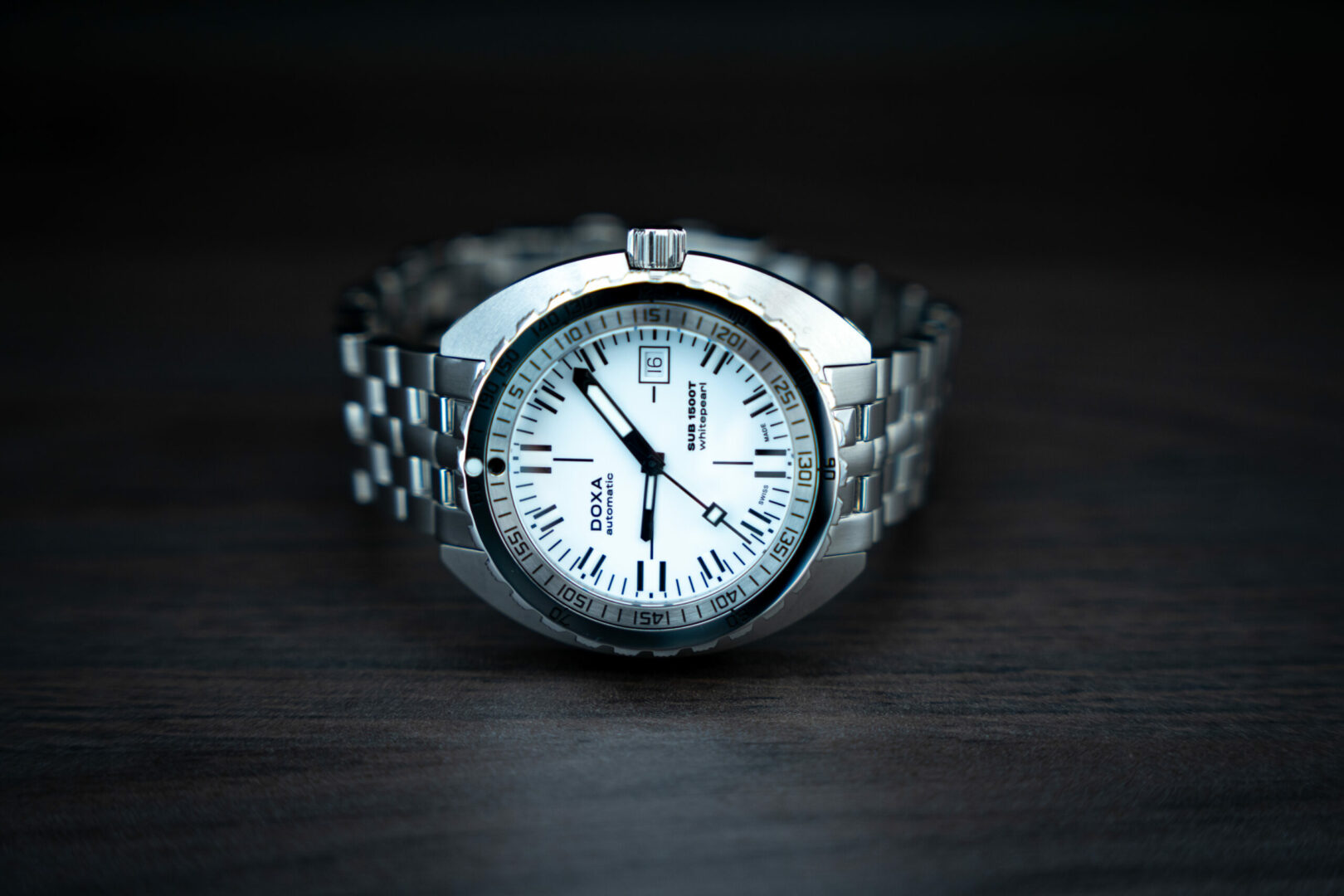 Doxa SUBs Glow Up With Expansion Of Whitepearl Colorway

In the 1970s world of recreational and professional diving, few names were as synonymous with undersea pursuits as Doxa. With roots that run deep, from Cousteau and his crew aboard to the Calypso to the aquanauts of the US Navy SEALAB program, Doxa is a brand almost entirely defined by tools built for submergence. In keeping with that trend, it has just announced a quintet of models signaling a new moniker, colorway, and even a luminescent surprise unlike anything seen from the company before. 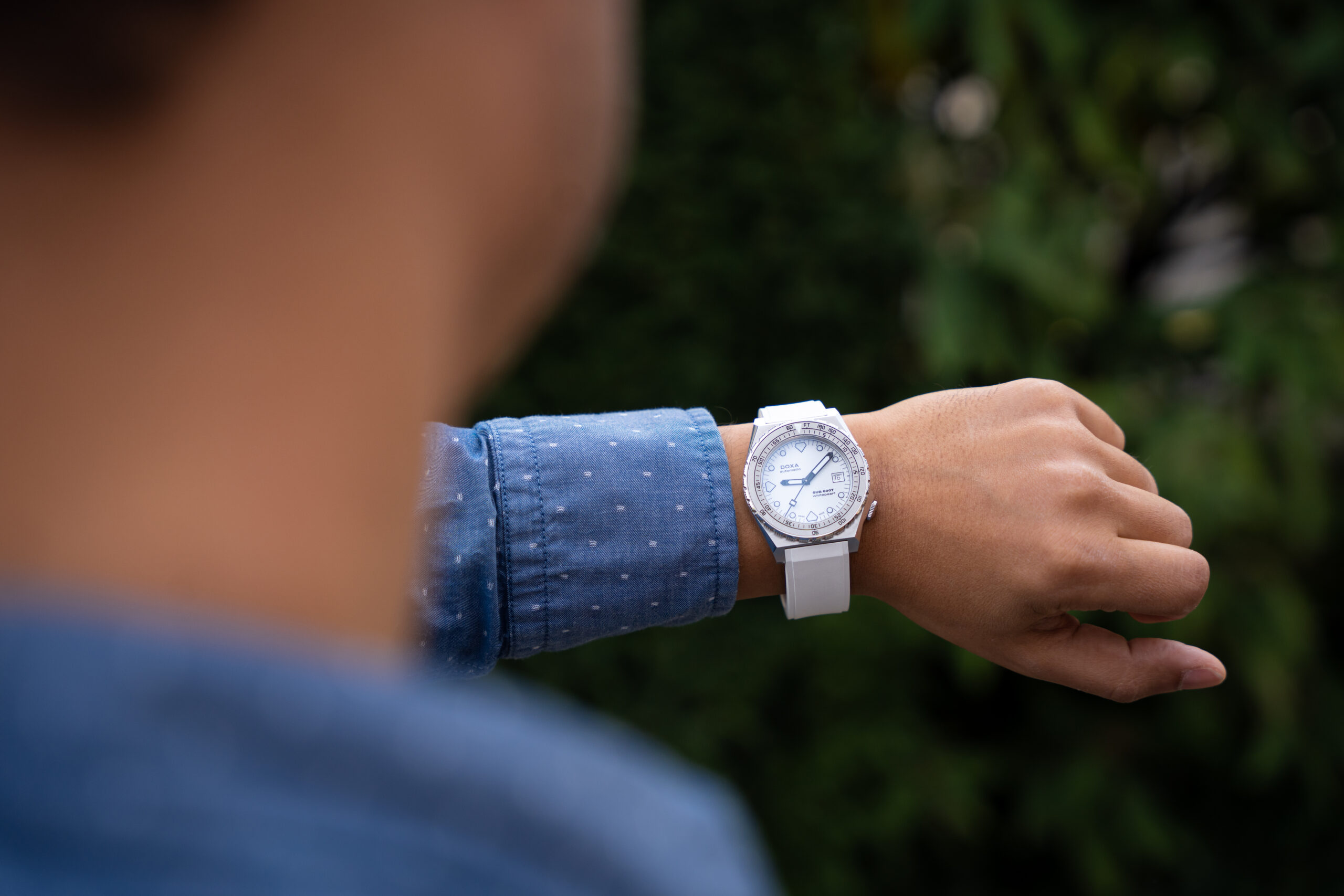 Doxa dial colors are (and have always been) identified by their given name: Sharkhunter is black, Searambler is silver, Professional is orange, and so on. In recent years, the line was expanded to include Caribbean, Aquamarine, and more. Last year, the SUB 200 made an appearance with a stark white dial dubbed “Whitepearl,” and now the popularity of that novel color has been added to five models to secure the Whitepearl’s place in Doxa’s pantheon of colors. 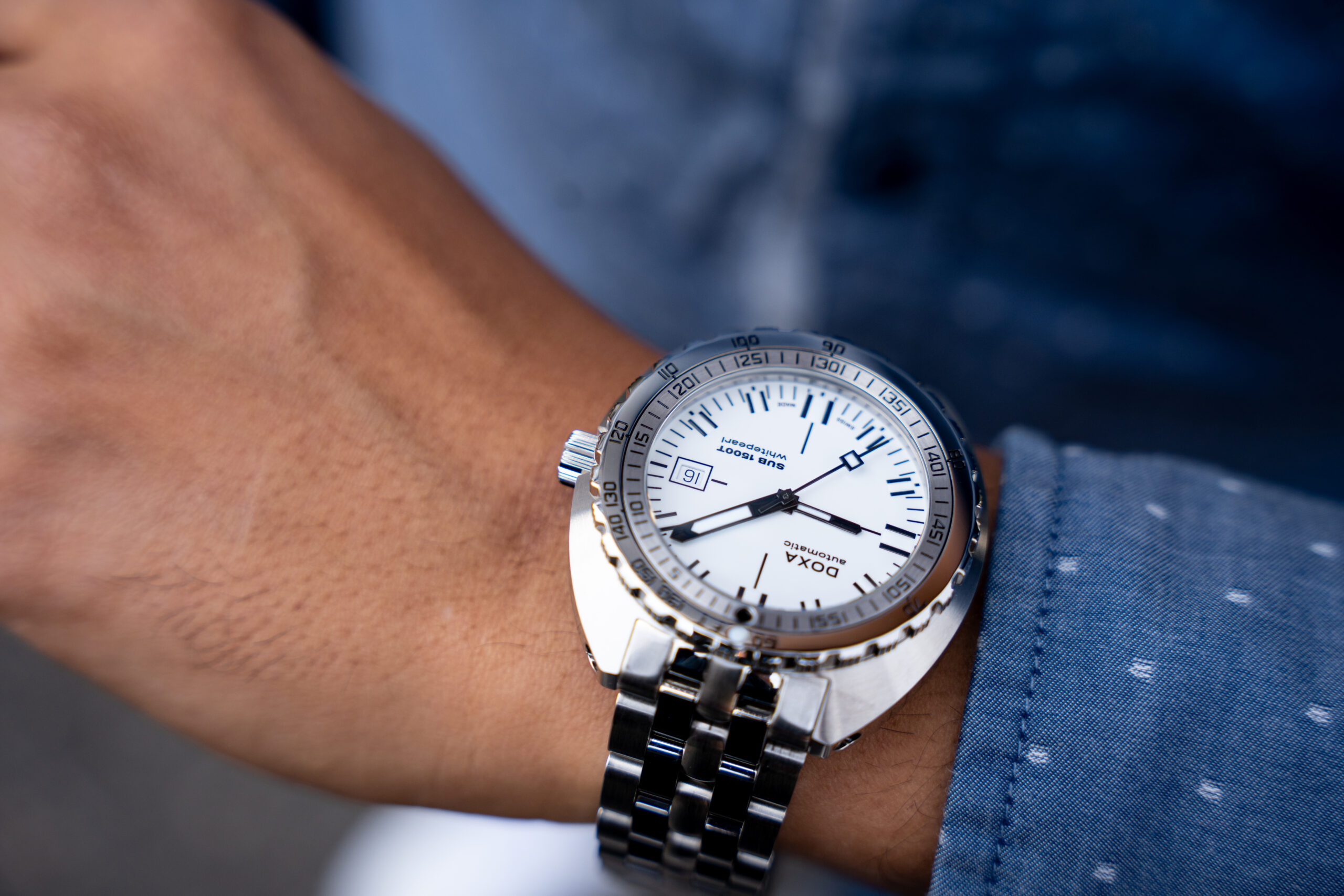 The relative newcomer to the Doxa family, the SUB 600T, is modeled after a creation first introduced in the 1980’s Aubry-era Doxa Lineage. This would have been post-Synchron and pre-quartz crisis. Timepieces or this era are defined by sharp edges, serious angles, and a beefy, asymmetrical case. The four o’clock crown is protected by a blocky protrusion that remains almost entirely unrivaled among dive watches. The addition of the pale, white dial brings this 80’s icon into the 21st century by creating something new for modern collectors. 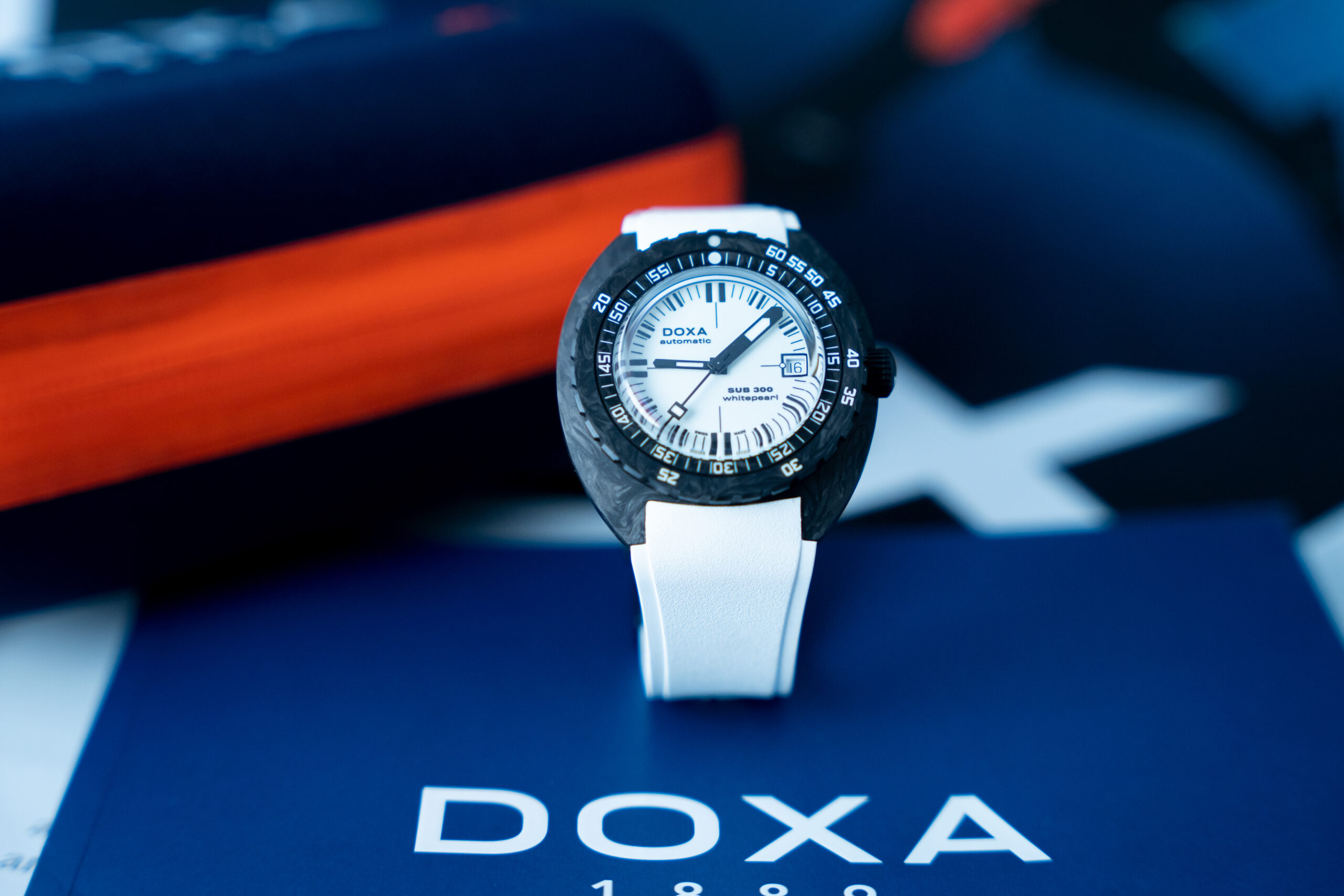 The great white shark of the bunch is the SUB 1500T. Rated to 1,500 meters, it is the most over-the-top member of the Doxa family. The Whitepearl dial improves legibility and further adds to the toolish nature. This is a timepiece that embodies the function-forward philosophy that put Doxa on the map so many years ago 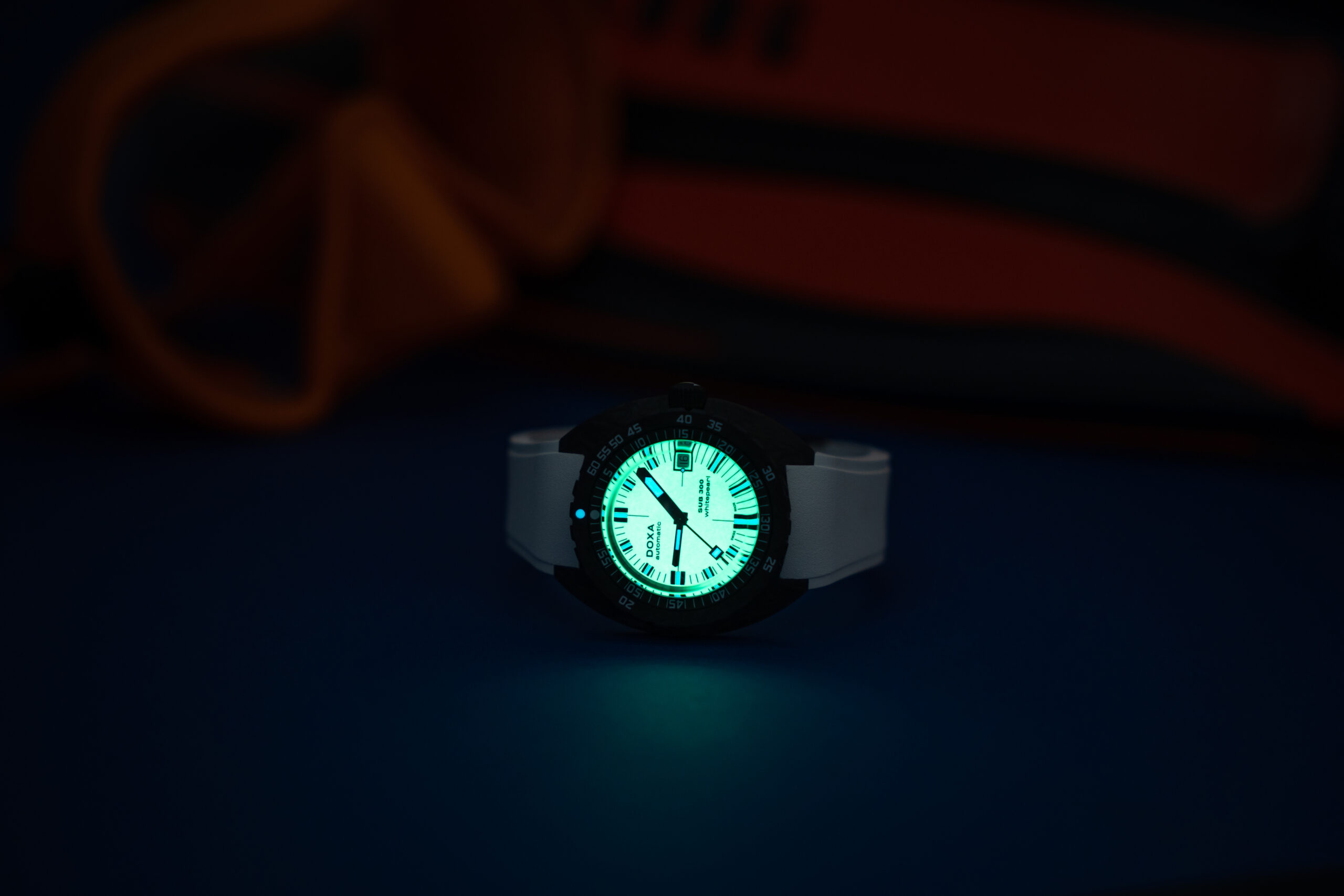 The SUB 300 and 300T are oft confused by those not intimately familiar with the Doxa catalog, and understandably so. The 300 (no T) is essentially the prototypical Doxa Diver. Characterized by the slim case and domed sapphire crystal, it can be easily identified when viewed in profile. The SUB 300T, historically, came about slightly later than the 300. By the time this occurred, the tonneau case was thickened up, and the domed crystal was exchanged for a flat option that made it less prone to scratches when put to use. The addition of a white dial to the ever-expanding prism of optional hues is a welcome one that continues the legacy of these colorful divers.

The dark horse of the Whitepearls is the SUB 300 carbon. Though the dimensions are identical to the stainless steel counterpart, the forged carbon case weighs in at a feather-light 87g. This contemporary material, aside from being ultralight, is durable and full of character. The ivory dial against the swirling abyss of the case creates tremendous contrast. Like the darkest portions of the ocean, the carbon Whitepearl hides a clever secret that becomes apparent when the light is low. The entire dial is coated in Super LumiNova, making it emanate a glow not unlike the bioluminescent creatures of the Abyssopelagic zone. In keeping with the “creatures of the deep” theme, it seems that each time a new Doxa is discovered, there is something even more fascinating lurking just a few meters ahead. 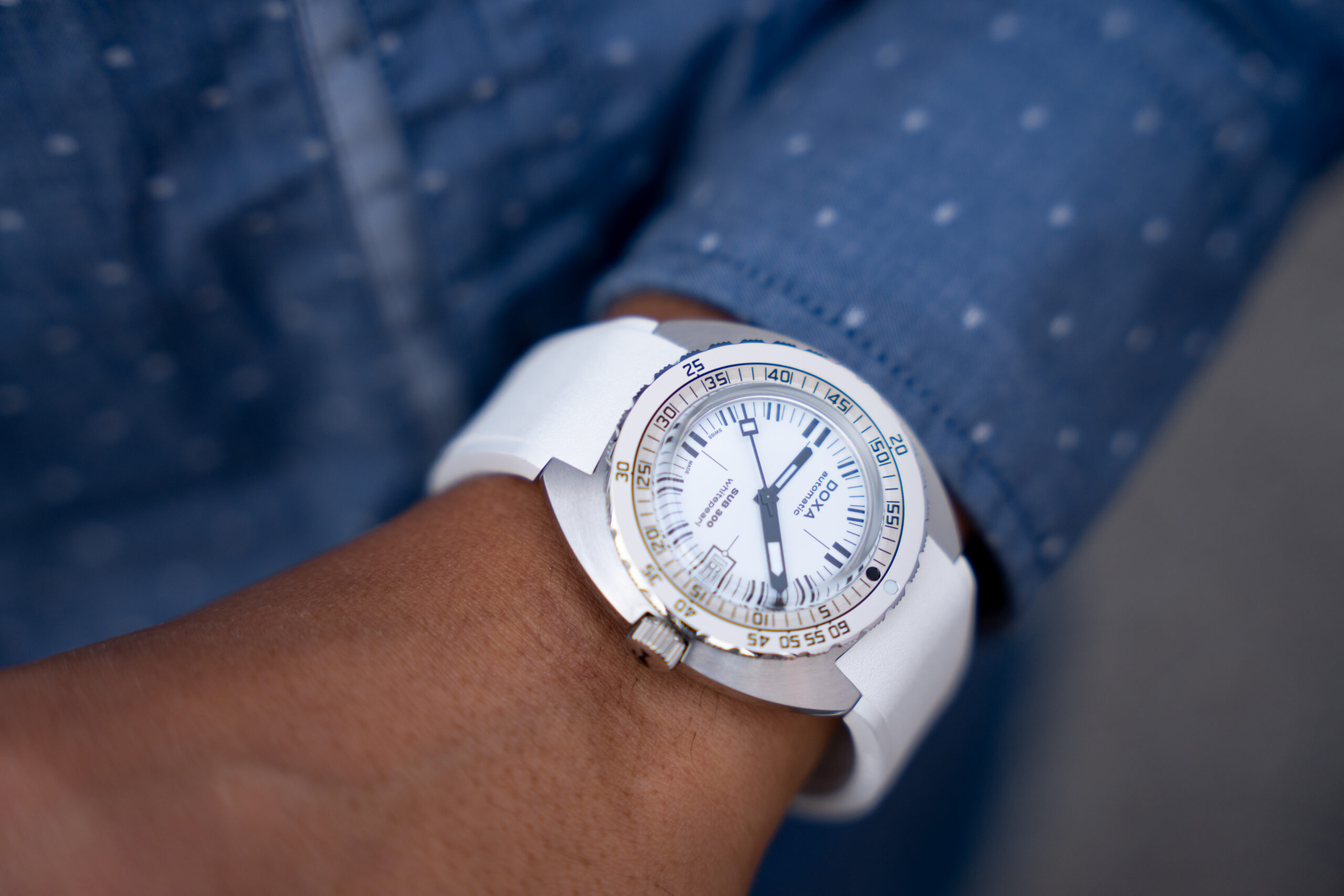