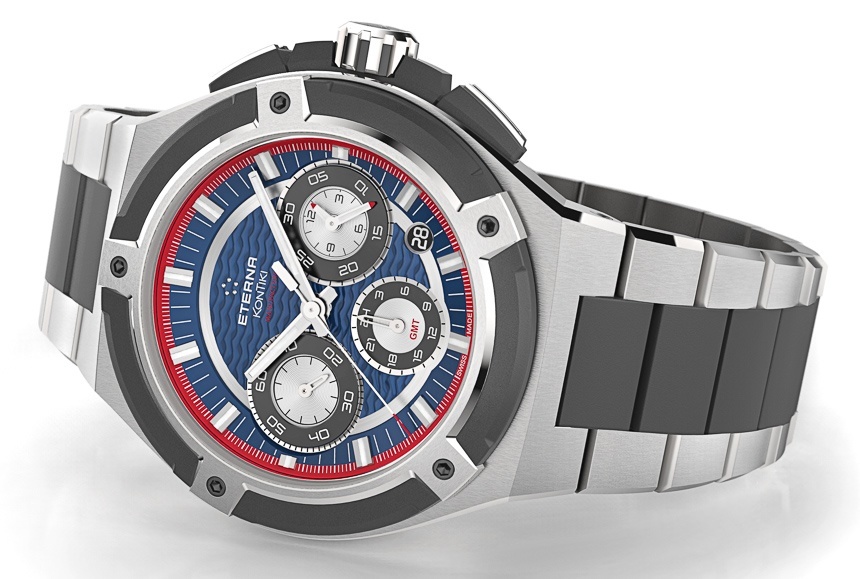 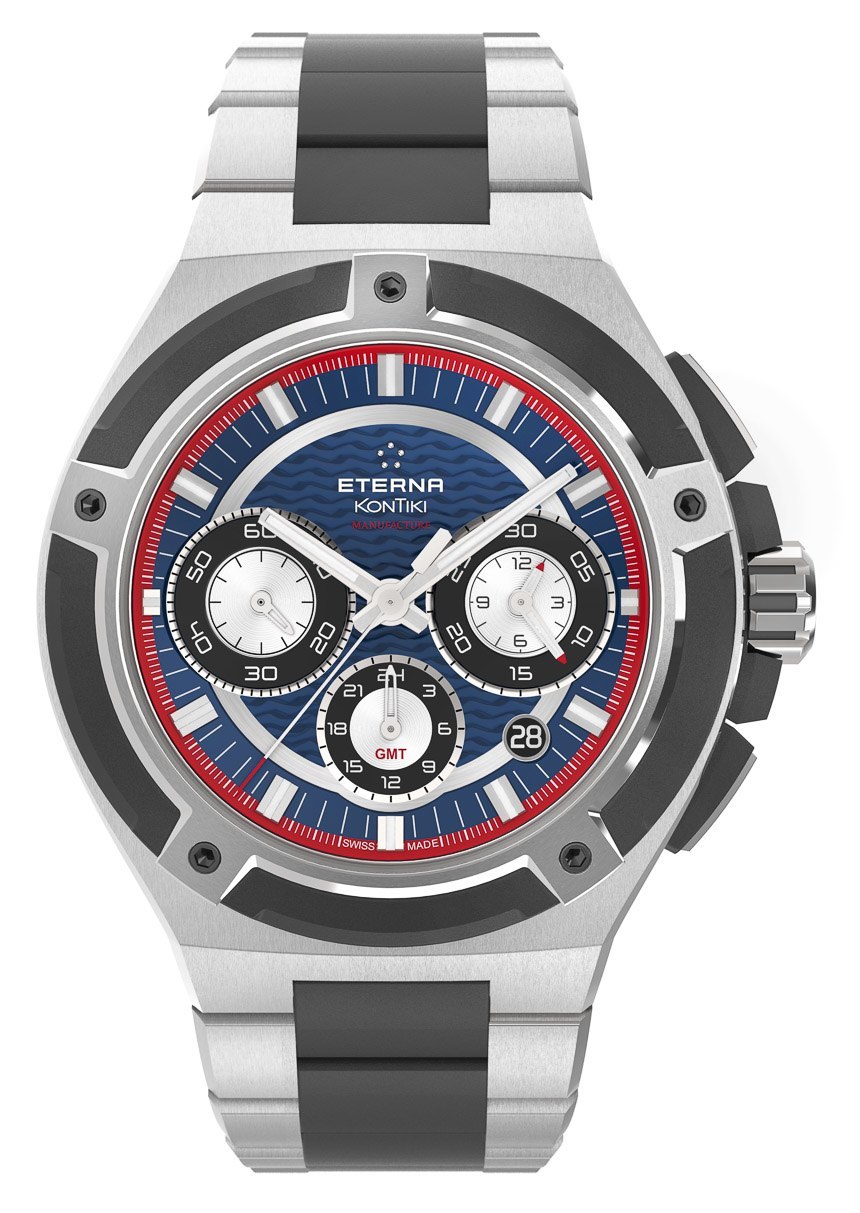 For Baselworld 2015, Eterna will debut a brand new version of its in-house made Calibre 39 movement known as the Calibre 3927A. This automatic chronograph GMT holds a lot of merit and will first exist inside of the new Eterna Royal KonTiki Chronograph GMT watch. Eterna made the decision to house the new movement in a relatively wildly colored watch, and hopefully, there will be more styles available when the watch launches soon. Until then, let’s check out the Eterna Royal KonTiki Chronograph GMT that looks pretty cool on paper.

Eterna debuted their new in-house Calibre 39 movement here back in 2013. The movement was to serve as a base for a range of other movements. Eterna claims that the Calibre 39 can be used as the basis for “no fewer than 88 different movements.” Given the watch industry’s regular pandering to Chinese love of the number “8,” this figure seems a bit dubious/arbitrary. I am pretty sure it is just 87 different movements… In any event, the Calibre 39 is a great engine and further contains Eterna’s useful Spherodrive system which adds durability to the mainspring barrel. 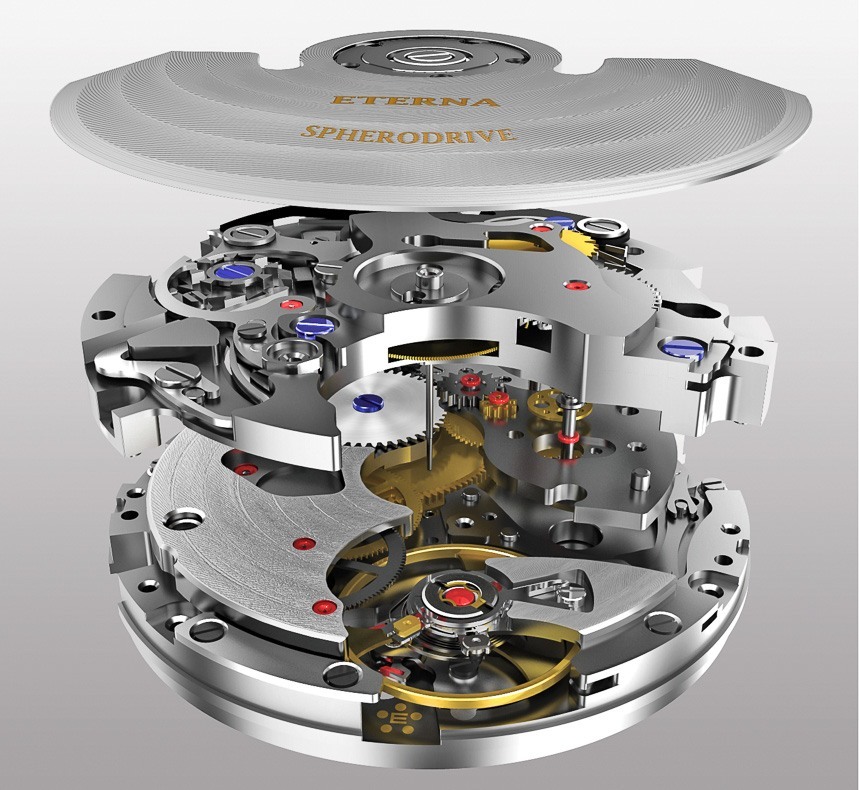 Eterna hasn’t offered all the information about the Calibre 3927A yet, but we know enough. It is an automatic that operates at 4Hz and contains a slew of useful features in addition to the time. More so, power reserve is at least 60 hours. Look closely at the dial, and you’ll notice that this isn’t your standard tri-compax chronograph. It is a full 12 hour chronograph with a flyback complication, as well as a subsidiary GMT hand which offers a second time zone (and of course the date). The right subdial has two hands which are used to track the chronograph hours as well as the minutes. It has been a trend over the last few years to include more than one hand in subdials so that they can be used to indicate more than one piece of information – though this is usually found on very high-end models. All things considered, the Eterna Royal KonTiki Chronograph GMT isn’t terribly expensive. Eterna also promised “chronometer-level” accuracy for the rate results of the Calibre 3927A. 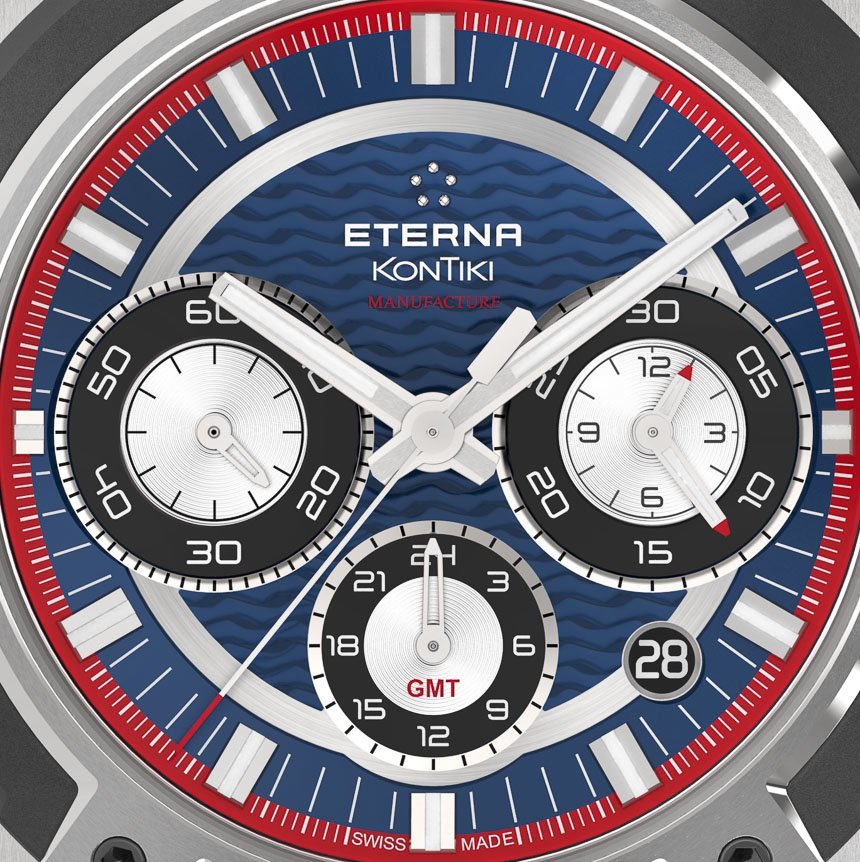 The middle links of the bracelet as well as the crown and chronograph pushers are coated in black rubber, while the screws on the bezel are PVD black steel. The black elements of the bezel otherwise are pieces of black ceramic. The core bezel design is a signature element of Eterna watches which has the five points which refer to the brands logo, which in turn refers to the five ball bearings placed in connection points of automatic rotors in their movements (which apparently, Eterna was the first to do a while back).

Eterna has shown us this blue and red dialed version of the Eterna Royal KonTiki Chronograph GMT – which I have a feeling is not the only version. It is distinctive and helps people remember this interesting watch. I look forward to seeing what I hope are a few more timeless dial options. It is good to see that Eterna continues to focus on interesting movements, which in my experience, is also accompanied by great quality cases and overall fit and finish. The 2015 Eterna Royal KonTiki Chronograph GMT watch will have a retail price of 7,500 Swiss Francs (7,550 Euros). eterna.com