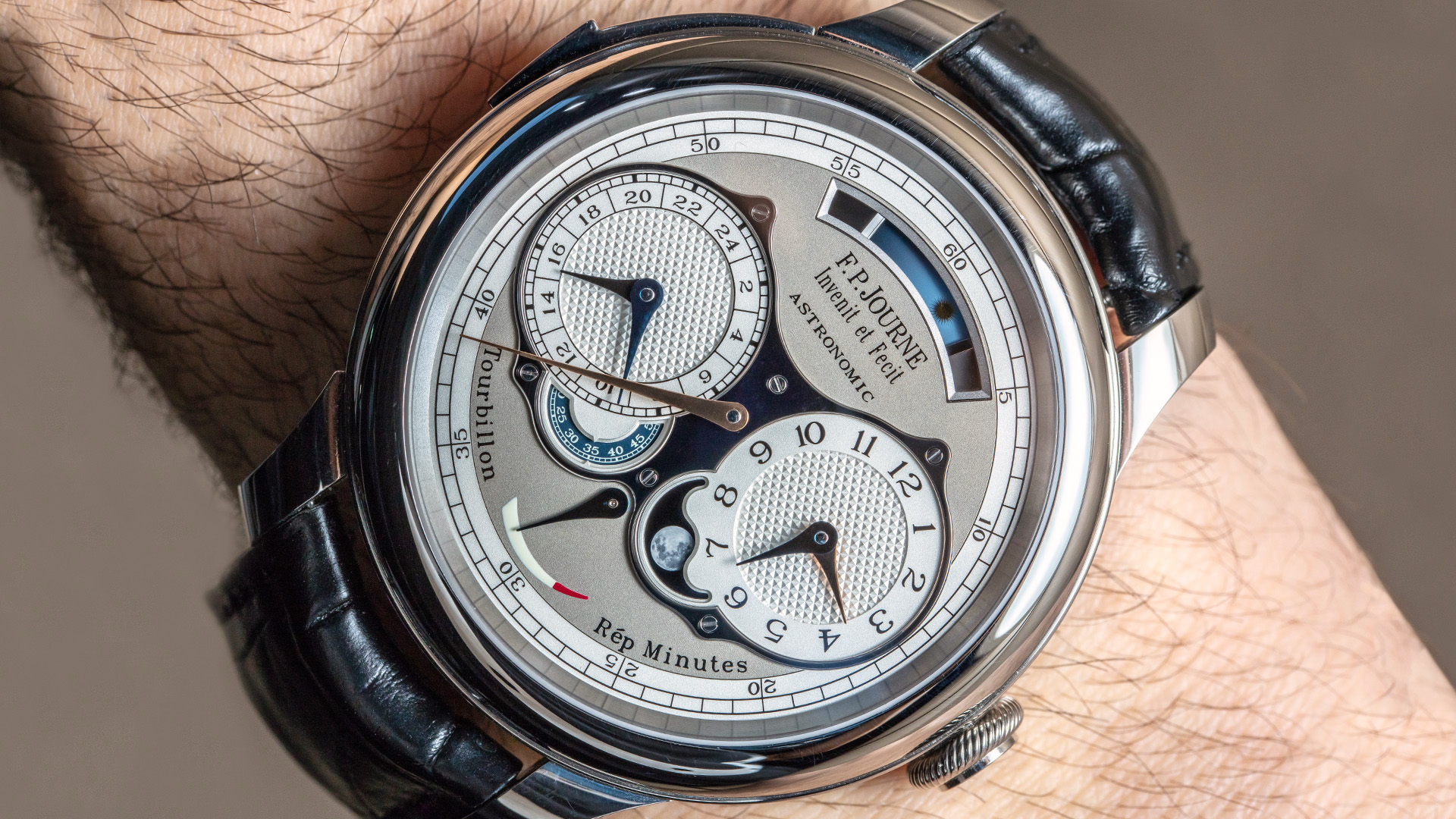 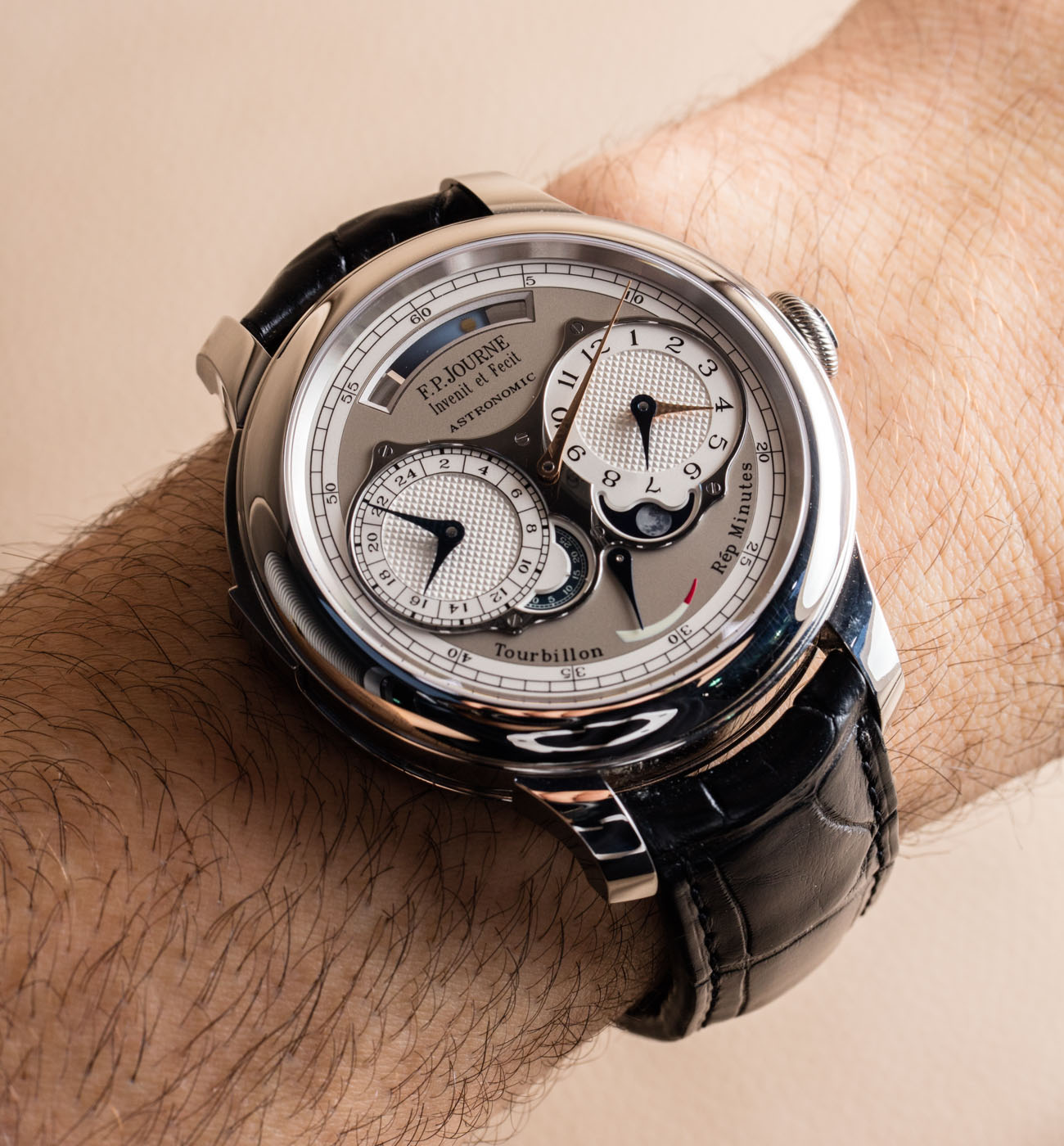 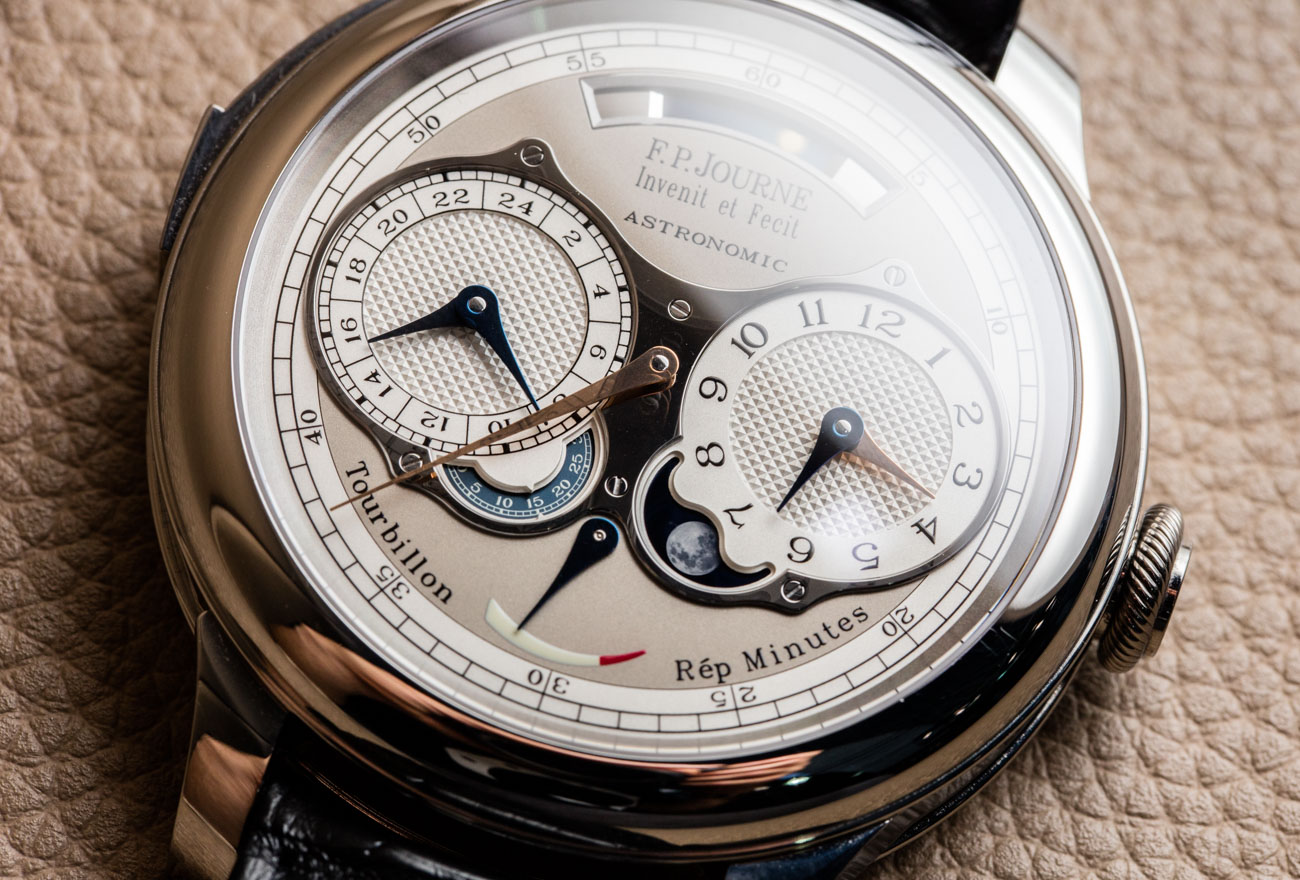 We’ve already told the story of the Astronomic Souveraine watch and its details in the above two articles. I will briefly go over the watch’s complications, but this will not be an overly technical article. Rather, I’d like to focus on the experience of wearing the Astronomic in person and how practical it might be. This is a watch-lover’s watch, as opposed to a show-off watch (well… around watch lovers it is a show-off watch). This means that F.P. Journe specifically wanted to make it function and operate well, as opposed to producing a product that fits a traditional luxury watch mold. 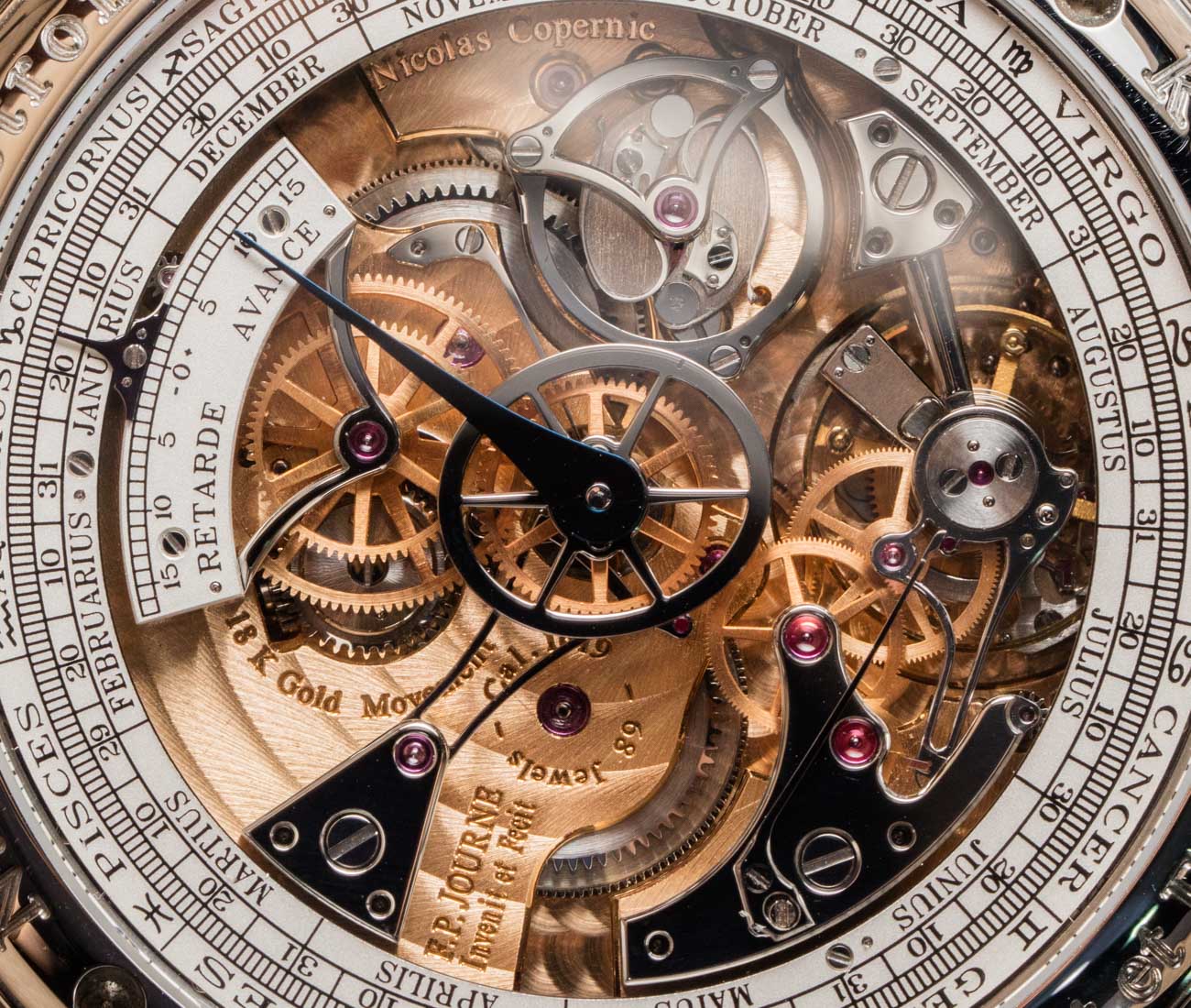 The best example of this is the use of a steel case. Steel is among the better metals for minute-repeater mechanisms because the high density of the alloy allows for better sound reverberation and thus higher volume. A poor metal choice would be platinum or gold, for that matter. What is gold is mechanical movements — so you have the brand’s own sense of luxury prestige built into a part of the timepiece that only the wearer (and that person’s chosen friends) can seen.

This is not the first time that Mr. Journe has opted for the sensible metal choice in a chiming watch. He famously did so on the F.P. Journe Sonnerie Souveraine watch (aBlogtoWatch hands-on here). The inclusion of a minute repeater is really just a sort of icing on the cake for this Astronomic since its entire purpose is about celestial indications and minute repetition of the time. On that same note, the watch doesn’t strictly need a tourbillon, but it also has one of those (humbly visible through the rear of the watch). When you are a watchmaker like F.P. Journe, one of the troubles is that you set such a high bar with collectors that, if you create something like the Astronomic Souveraine timepiece and don’t include a tourbillon, there will be plenty of bewildered e-mails to answer. So, to save time and explanation to many consumers, adding a tourbillon seems like a practical choice. This is the same audience of fans who seem to need the “tourbillon” and “rep [repetition] minutes” labels printed on the watch’s face. 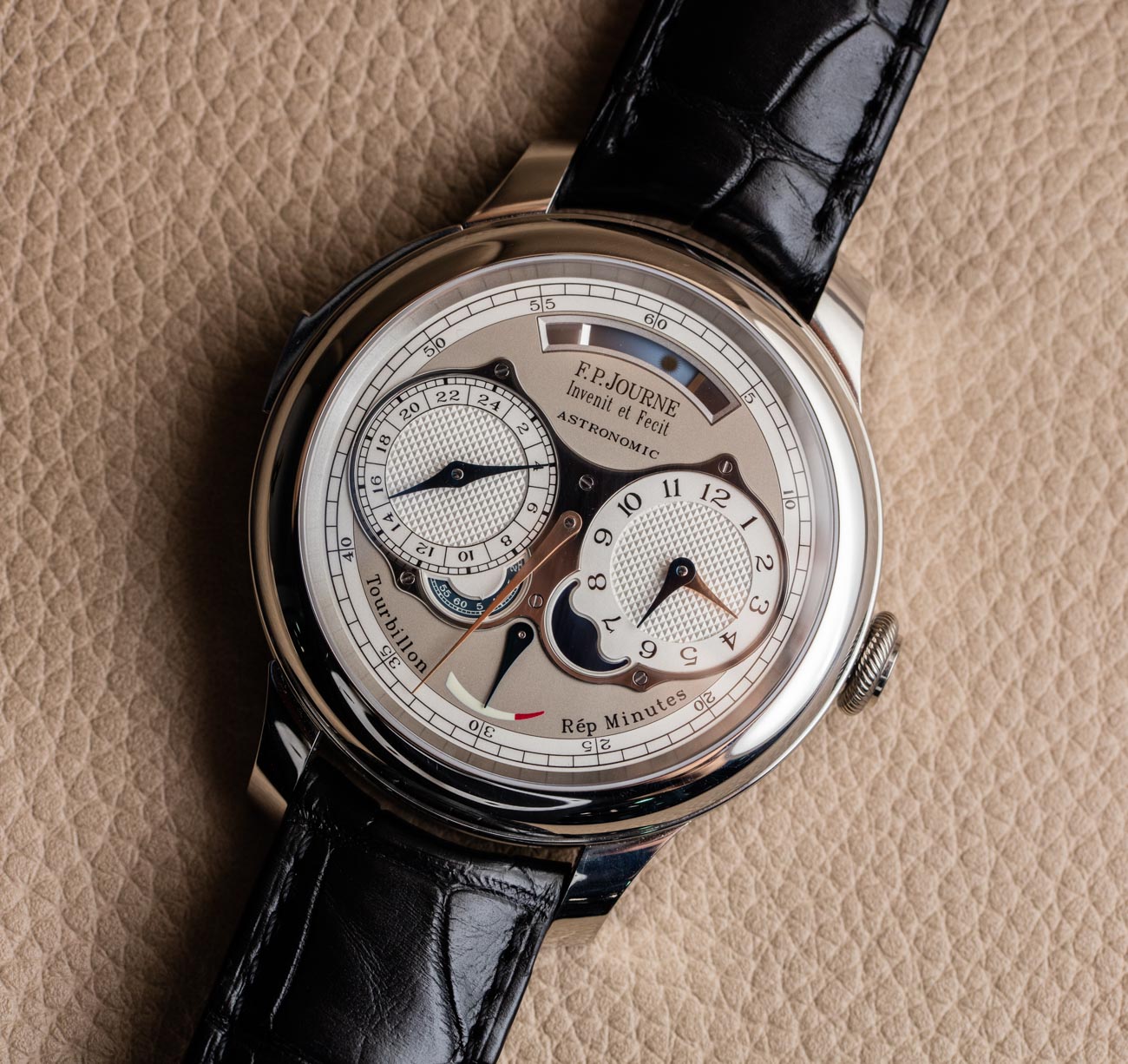 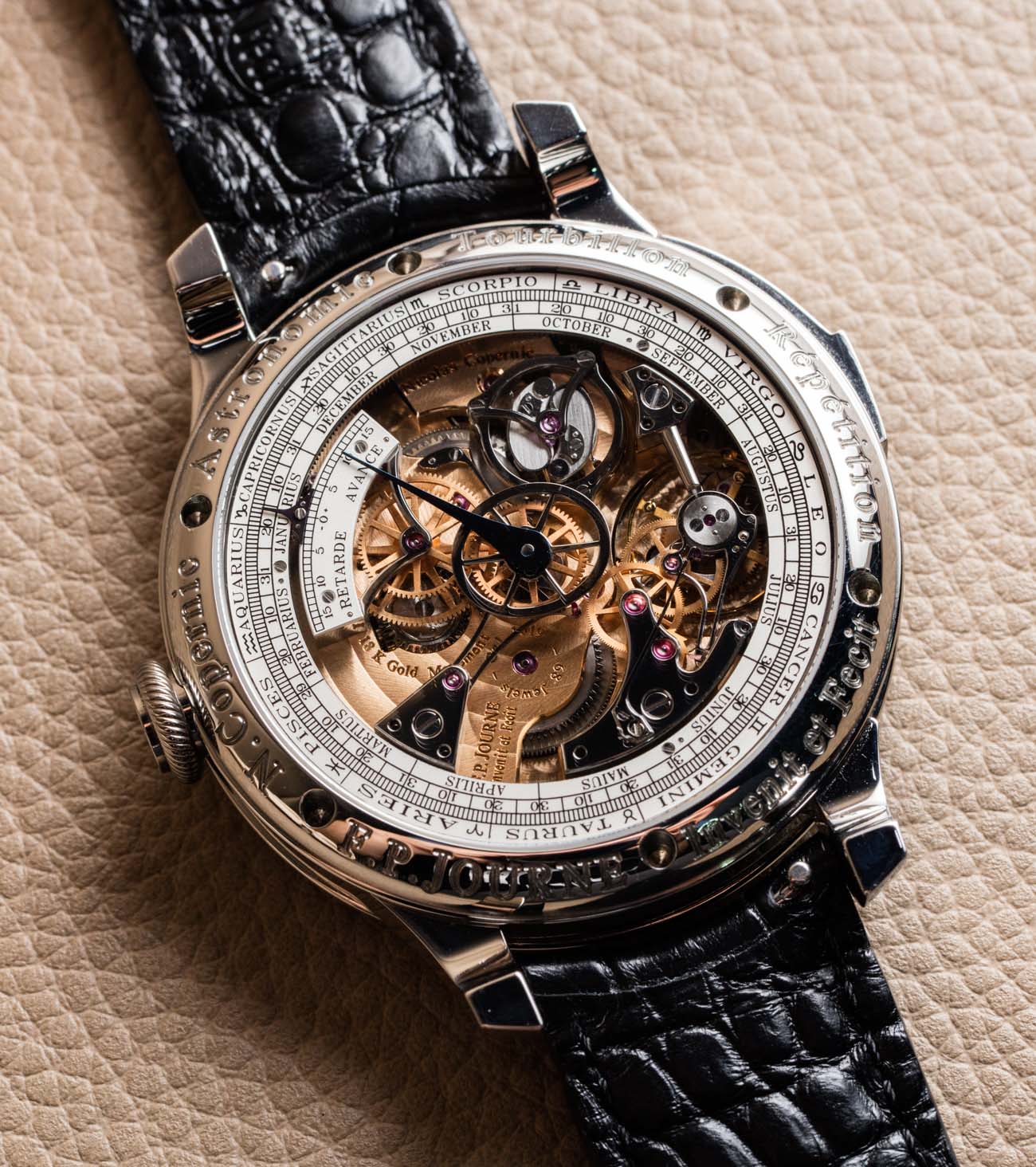 Inside the 44mm-wide (and 13.8mm-thick) steel case is the massively complicated 758-part manually wound mechanical movement. I believe F.P. Journe originally wanted the Astronomic to be an automatic movement, but that proved unfeasible. Bless him for trying, though, as I really want to see a watch called the “Automatic Astronomic” someday.

One of the things I appreciate most about the movement and case is the lack of inset pushers (from what I recall). That means all the watch’s functions are set by the crown — which is something I prefer. This makes a lot of sense from the F.P. Journe brand, and the first time I recall realizing that F.P. Journe hated inset case pushers as much as me is when he released the Octo Perpetual Calendar watch (aBlogtoWatch hands-on here). 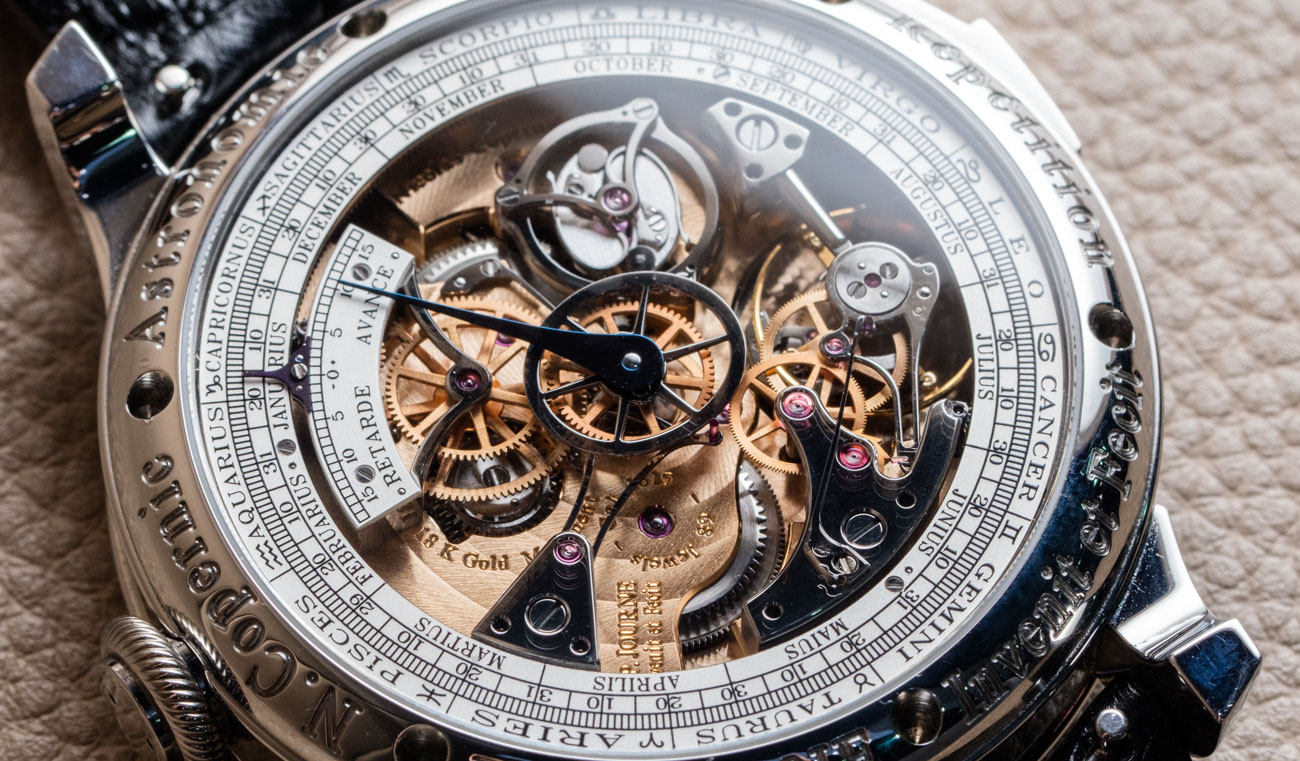 My biggest gripe about the Astronomic Souveraine is dial legibility. The dial design is just fine, but the particular choice of a domed sapphire crystal lends itself to a bit too much glare. Mind you that I was playing with a prototype (always an easy excuse), but there was a bit too much glare for my liking when it comes to a watch with this much detail to appreciate and notice on the face. For convenience, the watch straps do have quick-release spring bars, which is something that a few years ago I never would have thought to see on a high-end a timepiece.

Many people who see the Astronomic Souveraine are irked at first because they are not quite sure how to tell the time. Indeed, this simple function is not as intuitive as you may think — but I doubt that Francois-Paul cares too much. Ask him about how he likes to design power-reserve indicator markers (but not on this watch). The way to read the time is via the gold-colored hands. The minutes are indicated via the central hand, and the hours indicated on the subsidiary window near 3 o’clock. In that window, the blue hand is used for a second time zone. Seconds are indicated via a small moving disc located near 7 o’clock on the dial. That leaves an entire other dial for the time in 24-hour format (with minutes and hours), which is actually a sidereal time indicator (as opposed to civil time). 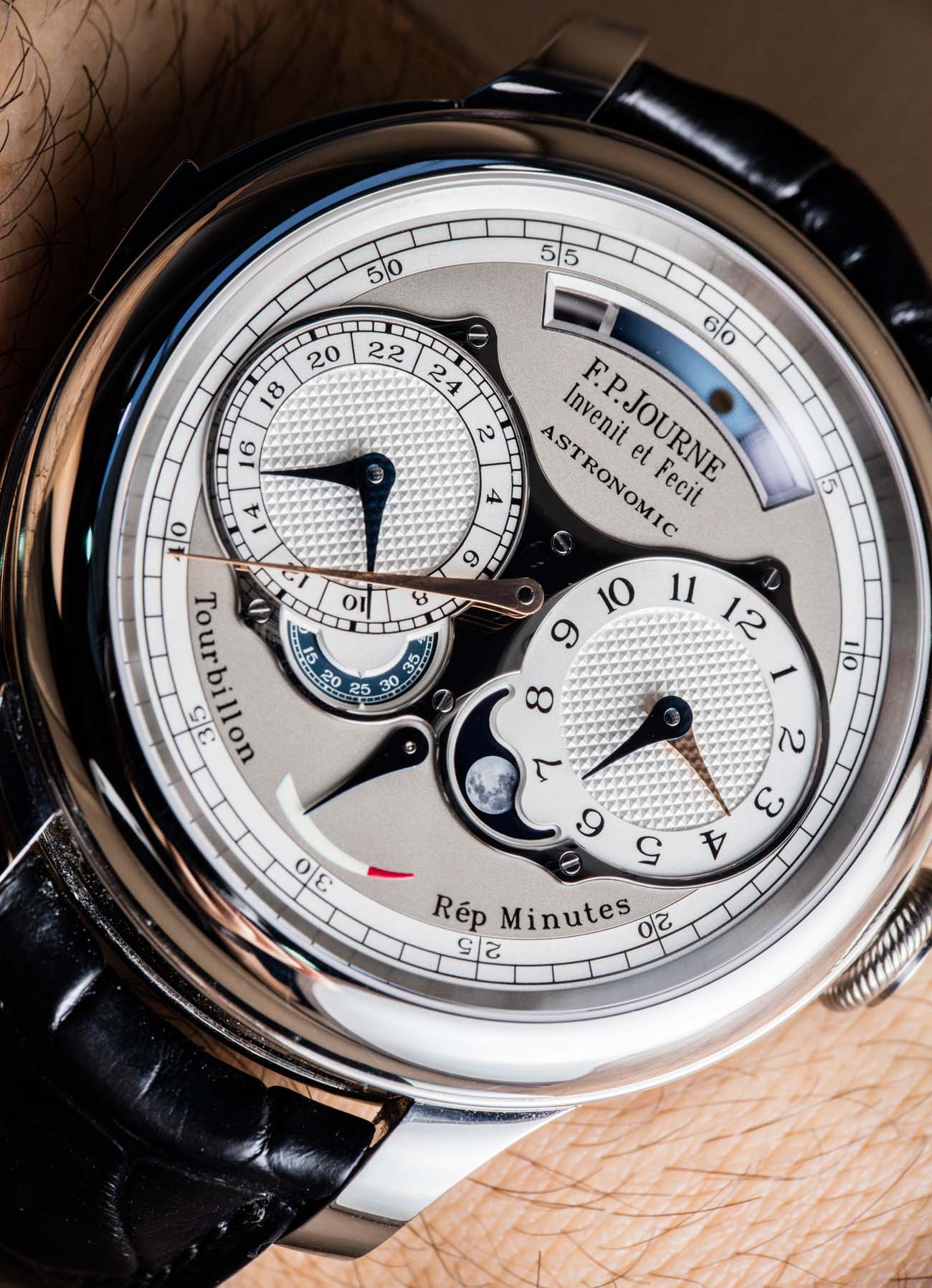 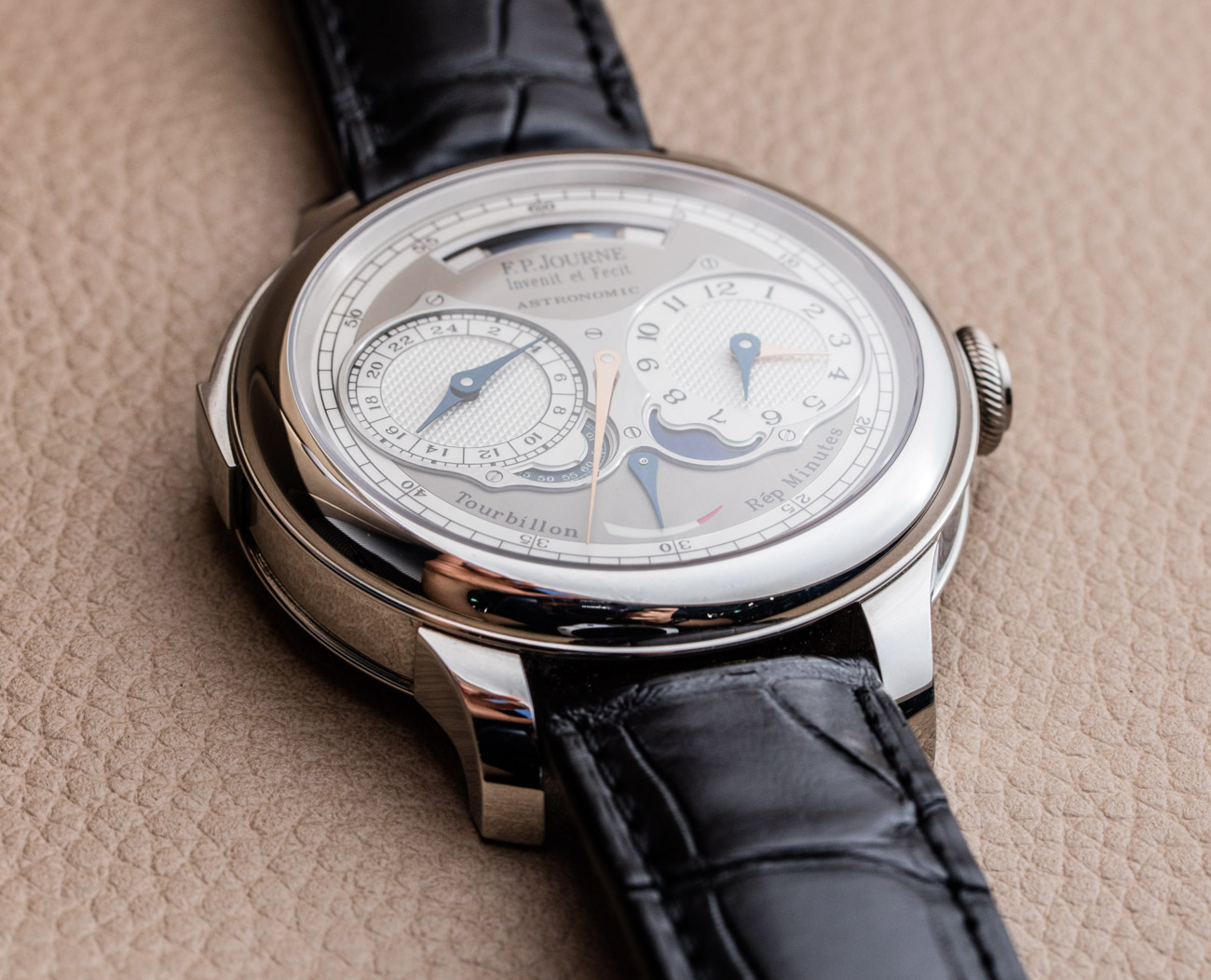 In keeping with the “astronomic” theme, on the year of the watch there is a further indicator for the equation of time. I’m happy to see this complication on the back of a watch because, as cool as it is, no one every really needs to look at it. Also on the rear of the watch is a peripheral indicator for the calendar, with an emphasis on also indicating the current zodiac sign.

Returning to the main dial, F.P. Journe also designed the Astronomic Souveraine to include a moonphase indicator (with a photo-realistic image of the moon taken from an actual NASA image of our moon), power-reserve indicator, and unique sunrise-sunset indication system that is really cool. The linear indicator features the path of the sun, which allows you to know what part of the day you are in, as well as when day is breaking and how near to sunset you are. What makes this feature extra-special is an added function that changes the length of the day on account of the different seasons. Mind you that this feature will need to be set to a particular city, as the watch does not have the ability to take into account other cities. For that, you’ll need an Apple Watch or other smartwatch (or Casio) for a fraction of the price. None of those watches will have mechanical metal shutters, though. See the sides of the curved linear window for the sun? Those sides can extend or retract a bit, which visually reduces the length of the day. It is a clever and elegant way to feature an analog depiction of the sun’s path while also taking into consideration longer and shorter days throughout the year. 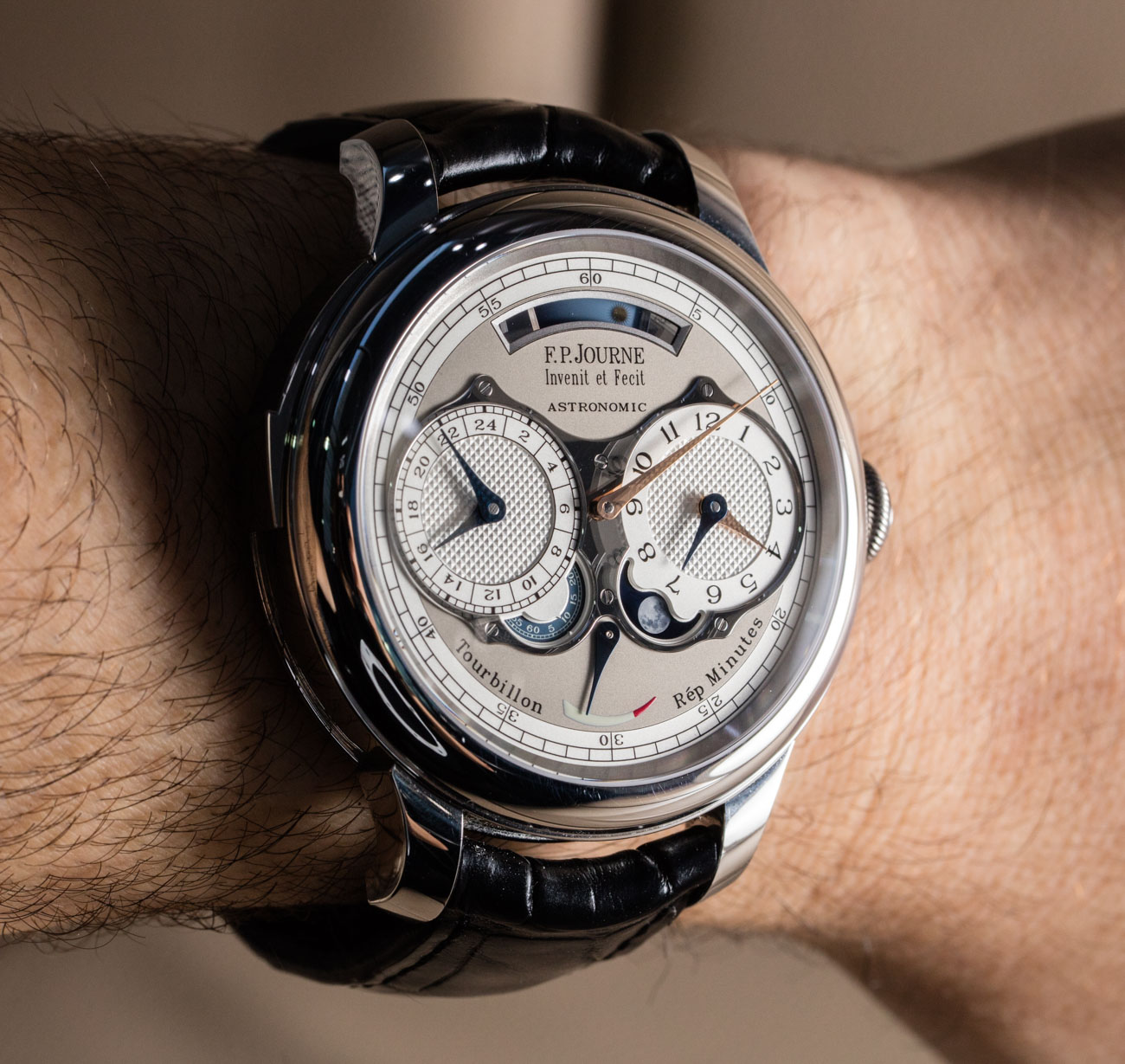 While not all watch-lovers will find the Astronomic Souveraine watch to be Mr. Journe’s most beautiful creation, it is remarkably elegant given its 18 features/complications and, technically, the watch is rather marvelous. The view of the movement doesn’t disappoint, either. What I also like is how wearable the watch is given its prestigious nature and the fact that only the most serious collectors will be willing to wait for one, as well as be able to afford it. F.P. Journe has indicated it will only produce a small handful of the Astronomic Souveraine watches each year — even though the collection is not part of a limited edition. Price is 885,000 Swiss Francs. Learn more at the F.P. Journe website here.