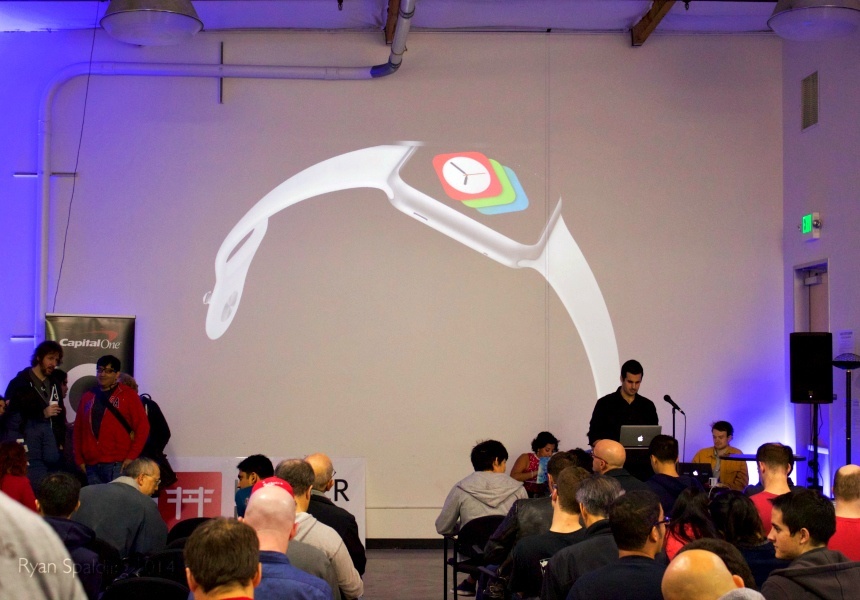 What Happened At The First Apple Watch WatchKit OS Hackathon November 18th 2014 marked the release of Apple’s WatchKit in preparation for their Apple Watch smart watch scheduled to launch in Spring 2015. The WatchKit is a resource for software application developers to begin creating apps specially made for the Apple watch. This was an exciting event because it not only gave the community more information about the upcoming Apple Watch product, but heralded a new era of creativity where developers will leverage the unique qualities of a wearable Apple device in considering the best ways to create exciting apps that may help transform where the wearable market is going. aBlogtoWatch was there to check it out.

In anticipation of the WatchKit’s release, Ben Morrow, an ambitious entrepreneur of Silicon Valley, hosted the world’s first Apple WatchKit OS Hackathon. For those unfamiliar, a Hackathon is an event which gathers programmers, project managers, and graphic designers to collaborate and develop projects for new software and upcoming products. The event was hosted in Santa Clara, California, at a place known as the Hacker Dojo. Upon arrival to this Hacker Dojo, we were quick to realize this wasn’t any ordinary location. What was once a large open warehouse had been converted into a fun and creative environment full of tech toys, billiards, and ping pong tables. The Hacker Dojo gives inventors and innovators an open environment to design and create anything their hearts desire, with access to a wide variety of 3d printers, CNC machines, and electronic equipment to bring their ideas to life. It really is a startup company’s paradise. Not a single square foot of this location went to waste; even the ceilings were riddled with QR codes to help track quad copters and guide them around the facility. The day prior to the event was reserved for teaching the participants the basics of the Apple Watch’s new software, as well as understanding some of its new hardware such as the taptic engine and heart rate sensor, and how it could open the door to a variety of new applications. The participants of this event were hobbyists and enthusiasts that spanned from the aforementioned graphic designers and programmers to project managers, all with a main goal of creating new and revolutionary applications for the Apple Watch. The event hosted people from all over, and for those unable to attend the event physically, a Google Hangout was created, giving anyone the opportunity to present their ideas and collaborate on projects through a live stream. The event started at 9:30am, where people were treated to a complimentary breakfast as they headed into the briefing room to attain more details about the event. The host of the event, Ben Morrow, discussed what features are currently available in the WatchKit and the rest of the day’s schedule. The participants were then given a quick 15 seconds each to explain what they hope to accomplish and recruit other members that may be interested in working on the same project together. Afterwards, the participants jumped straight to work, as they had a mere 5 hours to assemble teams, design and then develop the application, and finally to have a presentation ready to present to the judging panel. Lunch was also provided at the event, however, with so many people becoming absorbed in the development of their application, it was easy to forget to take a break.

Once all the teams had submitted their project, it was time to present, and with so many participants and teams, they were each given 2 minutes to discuss the app’s usefulness, and then run a demonstration of the application. The three judges used the following criteria to rank all the applications: how innovative it was, and how fitting the overall design would be for the Apple Watch.

Ultimately, the purpose of these apps should be to facilitate access to information for the user and to create an application which is unique to a smart watch and would not have the same effect if it were on a phone. This, however, is no easy task, considering just how easily we can already access information through our phones. Thus, creating something which is viable as being unique to the smart watch is another challenge entirely. The watch apps will function very similarly to the iPhone apps in terms of the notifications, and will give you a little tap using the taptic engine whenever there is relevant incoming information. A new feature which will be added into the mix is called a “glance.” The glance feature of the watch gathers and compacts the most relevant information, such as the time, weather, and upcoming tasks, and can be customized based on the users needs.

One of the participants at the event not only created an app, but an open source audio platform for Apple’s operating system called Audio Kit. This program can be used in a variety of ways, one of which was as a workout motivator app. Using the new heart rate sensor in the Apple Watch it is able to correlate your movement to the pace of the song your iPhone is currently playing. The watch takes the users heart rate information to relay back to the phone in real time – the quicker the user’s heart rate, the more sped up the song will play. Likewise, if you rest for too long, the songs will begin to slow down in correspondence with your heart rate, thus making the song much less enjoyable. The user can also choose to inverse these settings, as well as indicate their ideal heart rate to maintain a steady pace. Another interesting app which was developed at the Apple WatchKit OS Hackathon was an online ordering application integrated with the newly released Apple Pay. The app is currently geared for Starbucks’ ordering system, however, it has the potential for a wide variety of useful applications. Instead of waiting in long lines, the application allows you to place an order on the watch using simple icons for different drinks and sizes, checkout using Apple Pay, and then sit down and relax while they prepare the drink. Once your order is ready, the watch will use its built in taptic engine to notify you.

One of the overall winners for this event was an app called It’s Raining. This application gives you notifications through the watch’s taptic engine to let you know when it is about to rain. The program pulls all of its data from forecast.io and gives you a well-integrated read out of weather patterns based on your location. It can also accurately predict when it will start to rain down to the minute. Not only is this useful for things such as cycling and other outdoor activities, but it also has the potential of implementing this information into various other applications. What all these creative minds were able to accomplish through collaborating for 5 hours at the event was rather impressive, and gives us all a small glimpse into the future of smart watches. We can expect a few things from the Apple Watch from the release of the WatchKit. The watch apps will function very similarly to the iPhone apps in terms of the notifications, with the little tap using the taptic engine being a handy feature for whenever there is relevant incoming information.

Another new feature which will be added into the mix is what is mentioned just above, and is called a “glance.” The glance feature of the watch gathers and compacts the most relevant information such as the time, weather and upcoming tasks and can be customized based on the user’s needs. We also learned with the design guidelines of WatchKit that the screen resolution for the 38mm watch will be 340×272 pixels, and 390×312 for the 42mm.

The way the new WatchKit software places the apps and functions on these screens in order to fill available space also hints to potentially different sized screens in the future. The screen itself is rather restricted in terms of gestures to control the watch: you can use the crown, as well as vertical or horizontal swipes to scroll through items, and to select, there is the standard tap or a new feature called “force touch.” This force touch feature allows the user to bring up a menu by hard-pressing the screen to select between different actions. The Apple Watch will also essentially require an iPhone to run along with it, since it will usually reference back to it for apps which require a lot of processing power in the background. Although the smart watch industry has a separate market than that of the mechanical watch enthusiasts, it should be interesting to see how far this technology will get in its quest to become as standard a device as a phone is. Being a mechanical watch lover, one thing that I am excited about with the smart watch development is the potential for unique or custom watch interfaces. Fine watches with unique time displays are incredible to look at, although they usually come at a price which is out of reach to most. Although nothing can beat a mechanical masterpiece, giving a smart watch a bit of character when displaying the time could be rather interesting. Not only would it give developers and designers the opportunity to make some incredible looking time displays, but we can expect with some time and determination these once artificial time displays could be brought to life in a mechanical watch.

The possibilities are only limited by one’s imagination, and for every person that has this kind of creativity, there is another watchmaker or company out there that could have the technical skills and resources to collaborate and make a mechanical masterpiece out of it.